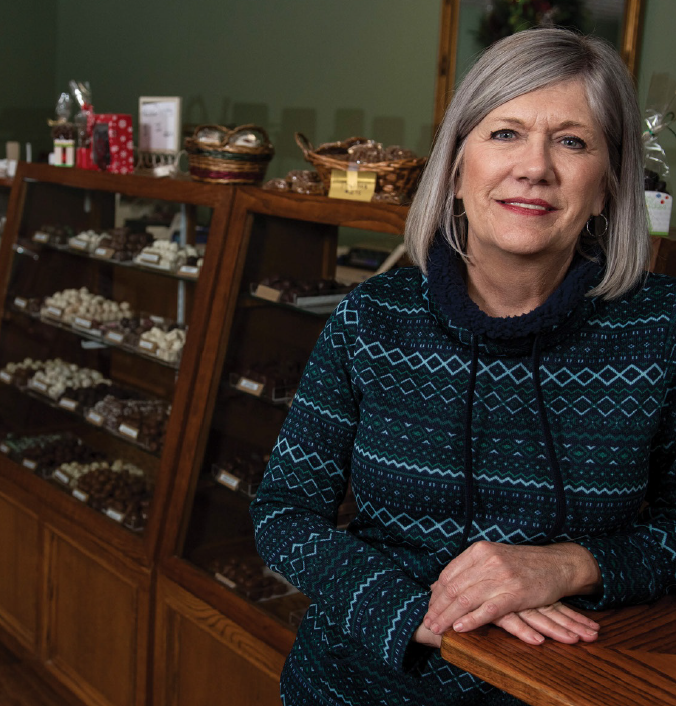 Sometimes it seems the front door never shuts for more than a few seconds. Loyal customers file in one after another seeking the candy shop’s signature turtle as a holiday gift. While customers are tended to up front, longtime owner Laura Portwood is elbow deep in a batch of caramel, a crucial ingredient in the candy so many in northeast Missouri know too well.

This busy holiday season is far from over at Bankhead’s Candies, however. She’ll see most of these faces again in just a few weeks when they return for the hand-dipped strawberries that have come to signify Valentine’s Day in Pike County.

Laura has owned Bankhead’s — a Bowling Green institution — for more than two decades. Located near the crossroads of U.S. highways 54 and 61, the century-old business is known for its wide variety of small-batch, handmade candies, especially turtles and chocolate-covered strawberries.

“It’s a business like no other,” says Laura, who was born and raised in the area. “People are always glad to be here and see our products. The customers we’ve served over the years have become family.”

The original 1919 iteration of Bankhead’s was a restaurant that stayed busy in the summer, butslowed in the winter. Looking to expand business, T.J. Bankhead would travel to St. Louis in the winter to meet and learn from big-city candy makers.

“In St. Louis, he learned how to make the caramel recipe that is now in our famous turtles,” Laura says. “Same recipe. We
haven’t changed a thing.”

It didn’t take long for the candy business to overtake the restaurant. The Bankheads built the business over decades
eventually selling it. The store changed hands multiple times and Laura’s mom, Mary Orf, became manager of the shop in the 1970s and worked for 15 years before buying it herself.

“It’s very labor intensive work. Working on the concrete, it gets to your knees, your back,“ the candymaker says.
“After owning it for five years, she said she was ready to stop.”

Mary indicated she would simply lock the doors if she was unable to sell it in a year. “I told her, ‘You can’t do that. You’ve got all of these businesses that depend on you for what you make. I said if you can’t sell it, I’ll buy it.’ I think that’s the point she quit looking,” Laura says with a laugh.

She has undoubtedly carried on the storied tradition of the shop during her 24 years of ownership. That is especially
true in early February when customers can’t get enough of the hand-dipped chocolate strawberries.

“The week of Valentine’s Day is nonstop,” Laura says, “We have flats of strawberries ready and we are constantly hand dipping and packaging them.”

Laura employs a chocolate tempering machine that keeps the chocolate in constant motion and regulates the exact temperature, allowing strawberries to be dipped at a faster pace. “That was a great investment,” she says. “One-half a degree or a full degree off is a big deal.”

Chocolate-covered strawberries aren’t hard to find at supermarkets or big box stores, but Laura says there’s a reason customers keep walking through Bankhead’s door instead. “I feel like the hand dipping is a lost art and that’s what we’re
known for.”

While the berries may steal the show in February, there is no doubt what the star of the show is the rest of the year at Bankhead’s.

“The turtles are by far our most popular,” Laura says. “What sets ours apart from everyone else is that original
caramel recipe that Mr. Bankhead perfected. We use quality cream, sugar and butter.”

The delicious mixture of caramel, pecans and chocolate are handmade in Bankhead’s kitchen and sold in the store
and shipped around the country, especially during the busy holiday season.

Laura and her team stay busy by making about four 65-pound batches of turtles per day in December. “I had no idea of the demand at Christmas time when I first took over,” Laura says. “I didn’t have one piece of chocolate left in the store on Christmas Eve that year.”

Customer Gene Scranton is doing his part to lighten Laura’s supply of turtles. He drives over the Mississippi from Illinois just to visit the sweet shop and picks up more than 50 boxes of turtles to give to his clients every December.

“I’ve never had anything that wasn’t good,” he says. “It’s always consistent and everyone appreciates getting them.
And Laura treats everyone really good. It’s a great smalltown business.”

Laura leans on Bankhead’s past when she can. The original cooking kettle is on display just as you walk in the
store and she creates most of her candies on an 8-footlong, 6-inch-thick marble table that was first used by T.J. Bankhead.

“It keeps the heat even and things don’t stick to themarble,” she says.

Employee and friend Sherry Lynn joined Laura to help at Bankhead’s for “what was supposed to be a few weeks,” 20 years
ago. Sherry can still be found hand dipping strawberries, making turtles or tending to customers at the store.

“I really like dipping the candy,” she says. “Just the outcome of it. People always leave here in a better mood because of the box of candy they picked out.”

With a century-old reputation of dishing out mouth-watering sweets, Bankhead’s has become a destination.

“The best compliments we get around here is when people stop in and tell us whenever they get within 45 minutes or an hour of our store they’ll go ahead and take the extra time to jog up here,” Laura says.

Bankhead’s reputation, commitment to quality and friendly service keep customers coming back in what can
sometimes be a tough rural marketplace.

“It can be tough,” Laura says. “Brick and mortar shops are going by the wayside. Being in a rural community, I think the most important thing is to be honest. And if you just treat people the way you want to be treated, you’ll be successful no matter what you do.”

For more information on Bankhead’s Candies, visit www.bankheadscandies.com or call 573-324-2312. Bankhead’s
is closed for renovations in January and will reopen on Feb. 4.