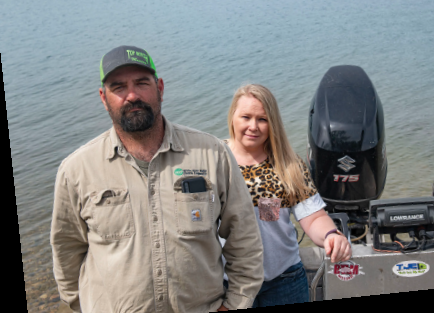 Lineworkers might be the most visible employees at electric cooperatives, and often their duties fall outside of their job descriptions. Whether it’s helping hang lights during the holidays or coming to the rescue of someone in need, lineworkers are often jacks-of-all-trades.

They receive extensive safety training including CPR, using automated external deﬁbrillators and overall ﬁrst aid. While that training is intended to save the lives of their fellow workers if the need should ever arise, they don’t forget their training while they’re off the clock.

David showcased the skill set that had been ingrained in him when he rescued a man from Table Rock Lake in late March.

“Storms were in the forecast that night and as I was getting ready for bed, I told my wife, Marlana, that I really didn’t feel like working tonight,” he says. “Then around
3:30 my phone rings and she just giggles at me, ‘Looks like you’re going in.’ ”

However, it wasn’t a co-op dispatcher on the other end of the call. It was his longtime hunting and ﬁshing buddy Doug Rader, the sheriff of Stone County. His deputies and Kimberling City police ofﬁcers were in pursuit of a stolen truck on Highway DD, which dead-ends at Coney Island.

“I was on my way to the scene and heard the suspect had stopped and ran by foot into the water,” the sheriff says. “He was about 30 to 40 yards out and was not obeying verbal commands.”

Water rescue crews were contacted, but Doug says the time he thought it might take them to get there was time the man in the extremely cold water didn’t have. He knew Da-vid and Marlana — who own a bowﬁshing boat outﬁtted with LED lights — lived about one-half mile from the scene.

“When I called him, all I told him was that I needed a boat right away. There was a suspect in the water at Coney Island,” the sheriff says. “All he said was, ‘I’m on the way.’ ”

The Byrnes bolted out of bed, hooked up their boat and had it in the water within 20 minutes. The plan was for David to pick up a deputy for the rescue. However, upon arriving at the scene and seeing the suspect barely above water, he told his friend they didn’t have any time to spare.

Marlana backed the boat into the water and David was off. It was about a mile ride to reach the suspect. Once assured that the suspect wasn’t any danger, David grabbed the man and pulled him to safety and the awaiting ofﬁcers and deputies.

“David was only out there for probably a few minutes,” Sheriff Rader says. “It just seemed like eternity because we knew the man didn’t have much time left.”

David’s comfort level on the water and quick-thinking ability undoubtedly helped the man survive. Life on the water is in his blood. His father was a Water Patrol sergeant at Table Rock Lake for 30 years.

“Everything just kind of worked out perfectly. It happened right near our home, I had the right kind of boat and Doug knew he could call me,” David says, before chuckling. “Well, perfect other than the guy didn’t need to be in that position in the first place.”

Doug agrees that everyone’s collective actions helped save a life that evening. “I’m pretty sure that guy would have drowned if it didn’t work out the way it did,” he says. “The water temperature was in the low 50s. The guy wasn’t in great shape and was in the water for 30 or 40 minutes. Dave went way above and beyond that night. He’s a hero.”