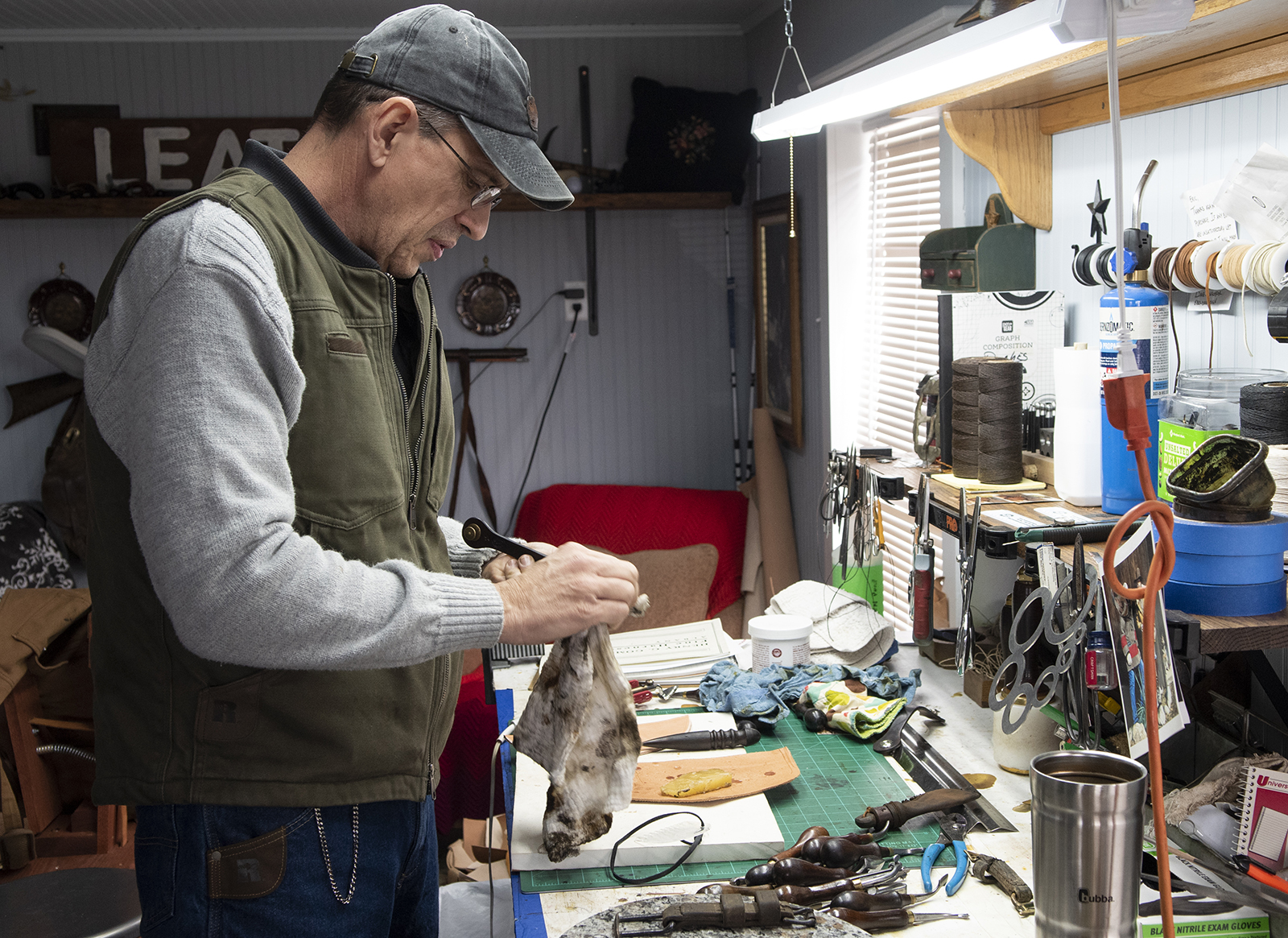 Looking back on the craft he practices, historical leatherworker Eric Van Alstine realizes he’s come a long way. “I knew nothing about leatherwork,” he says of his entry into the craft. “All I knew was I wanted to have these really cool hunting pouches. And I was intrigued by how they were made.”

He started looking for information on leatherworking and quickly discovered many of its practitioners didn’t want to share their hard-earned knowledge. Undaunted, he turned to books and began scouring the internet — then in its infancy — for the tools used by early American leatherworkers. His quest took him to Indiana, then California where he met a veterinarian who also collected leatherworking tools. Through him he learned that the tools, though scarce, could still be found.

“They are still around, but it is a hidden culture,” says Eric, a member of Howard Electric Cooperative who lives near Higbee. “Most of my tools come from the golden age of leather tools. It started in the early 1800s. The golden age kind of faded into the sunset around 1920.”

In dressers and on shelves Eric’s wife, Lin, calls “the museum,” Eric has rows and rows of tools the average person never knew existed. His collection dates as far back as 1790 and as recent as World War II. Some carry the touchmarks of C.S. Osborne, who started his toolmaking business in 1826, or H.F. Osborne, who left his brother to start his own company in 1876. Others were made by the highly respected toolmaker Henry Gomph.

“These guys made magnificent tools,” Eric says. “They used African rosewood, they used real steel and these guys were artists in their own right. These things still work today just like the day they were made 150 to 160 years ago.”

Along with these finely crafted tools with brass and silver inlays are crude but effective tools carved from wood by rural leatherworkers who used what they could find.

Eric collected the tools for one reason, and that is to use them. His skills in crafting leather pouches, bullet bags, knife sheaths and other items used by those who built this country grew along with his collection of tools.

A typical piece from Eric’s Ironweed Leather shop begins with a conversation with the customer. “The first thing I’m going to ask you is what do you want it for? What is your persona? Are you a backwoodsman? Where do you live? Because there is a difference if you live in North Carolina or Virginia,” Eric says. 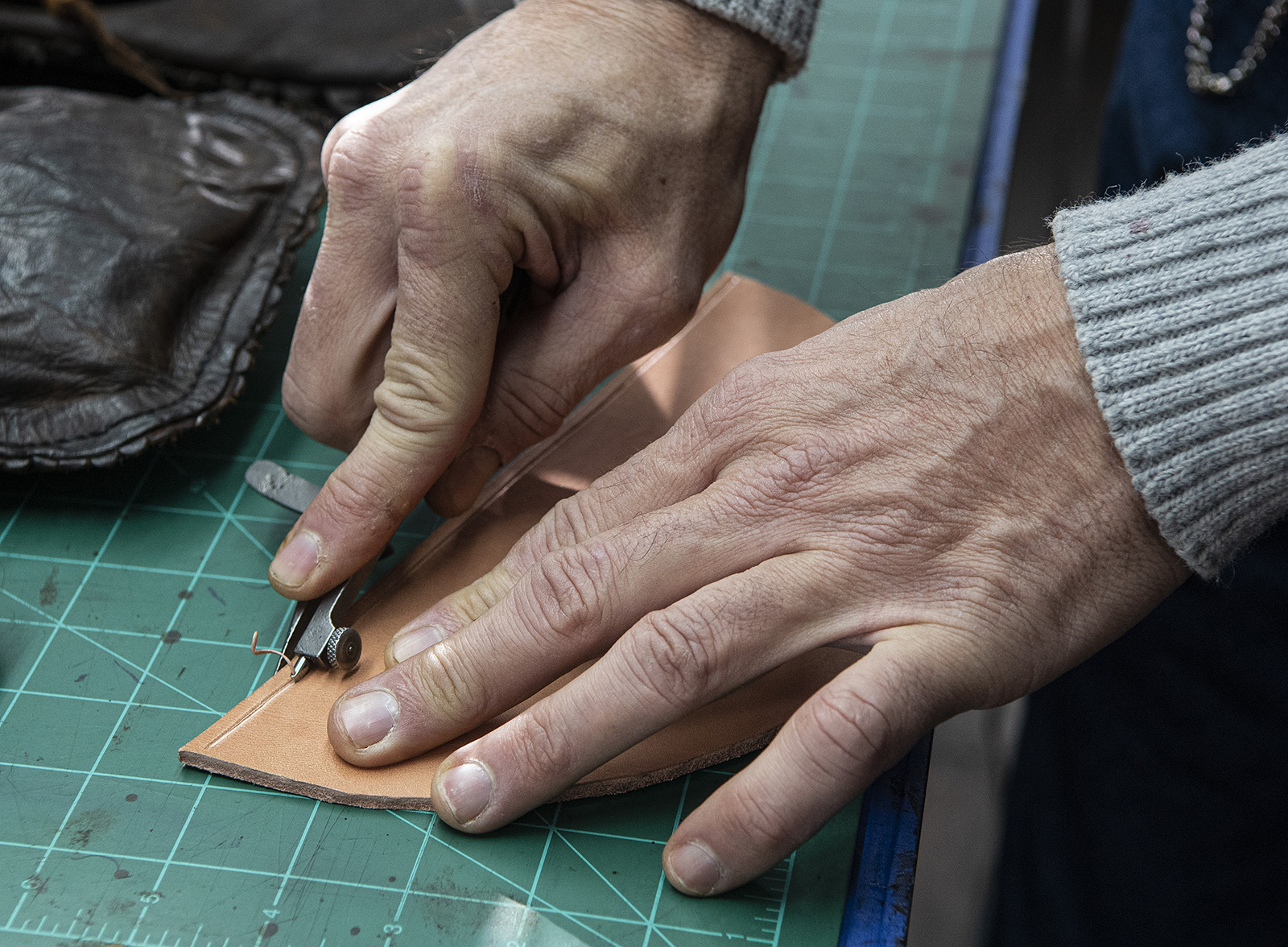 From the answers he will spend a good eight hours doing historical research from his extensive library. He will seek original examples to study. Then he will start sketching on paper to come up with the design. From posterboard patterns the idea finally moves to leather. “Then comes the stitching part,” Eric says. “Depending on how fancy it is, it could take me three or four days of straight work just doing that all day long.”

He likes the cold days of winter because it lets him spend time stitching in front of a fire. “That’s where you spend your time,” Eric says of the careful stitches he puts in his work. “These cold winter nights are fantastic. I just let it get cold out and sit down to stitch.”

The finished product is far from being done, however. The leather still carries the new, white patina from the tanner. What sets Eric apart from other leatherworkers is the care he takes to make each piece look like it spent years in the company of a pioneer. His antiquing process took him years to perfect.

“I use six different layers of antiquing,” he says. “Because I want it to have that old, worn-out leather look and feel. That is a three-day process all by itself.”

He shuns harsh chemicals and uses only natural methods to age his work. From the historical accuracy to the careful stitching and use of antique tools down to the timeworn patina, everything Eric crafts is truly one of a kind. “I want it to look like some guy needed to feed his family and this is all he had to put his stuff in,” Eric says.

There’s one final step Eric takes before he is ready to part with his creations. Each one carries a tiny star stamped into the leather next to Eric’s own Ironweed Leather Maker touchmark. Eric calls this a “Mock Shining Star” and it is a tribute to his friend and mentor, Glen Mock, who died in 2020. Eric found the star stamp among the tools he purchased from Glen’s wife, Connie, after his passing.

“It’s the only one I’ve seen like that,” Eric says of the silversmith stamp. “That’s my way of remembering Glen. You will see the Mock Shining Star somewhere on my work. Nothing leaves my shop without it.” 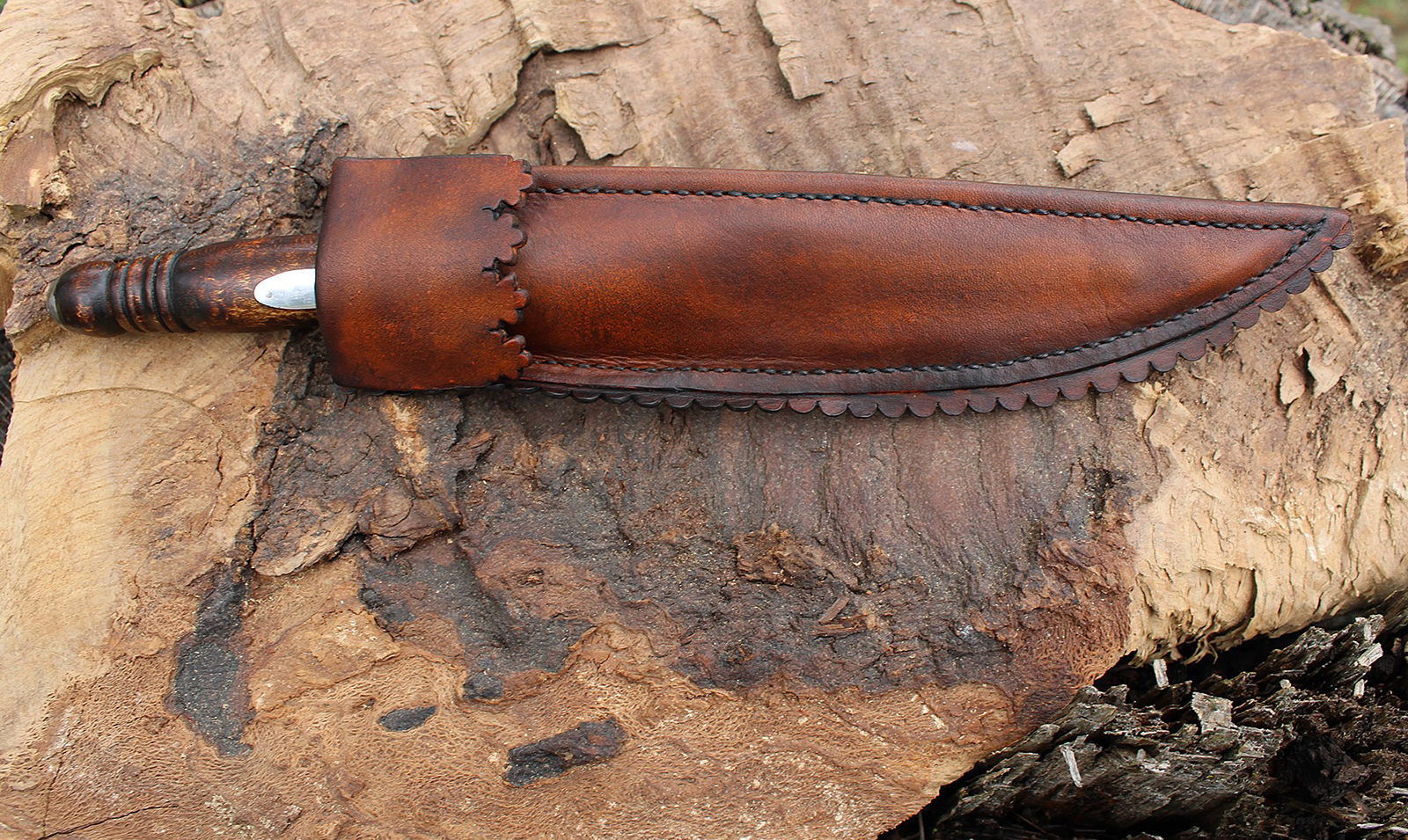 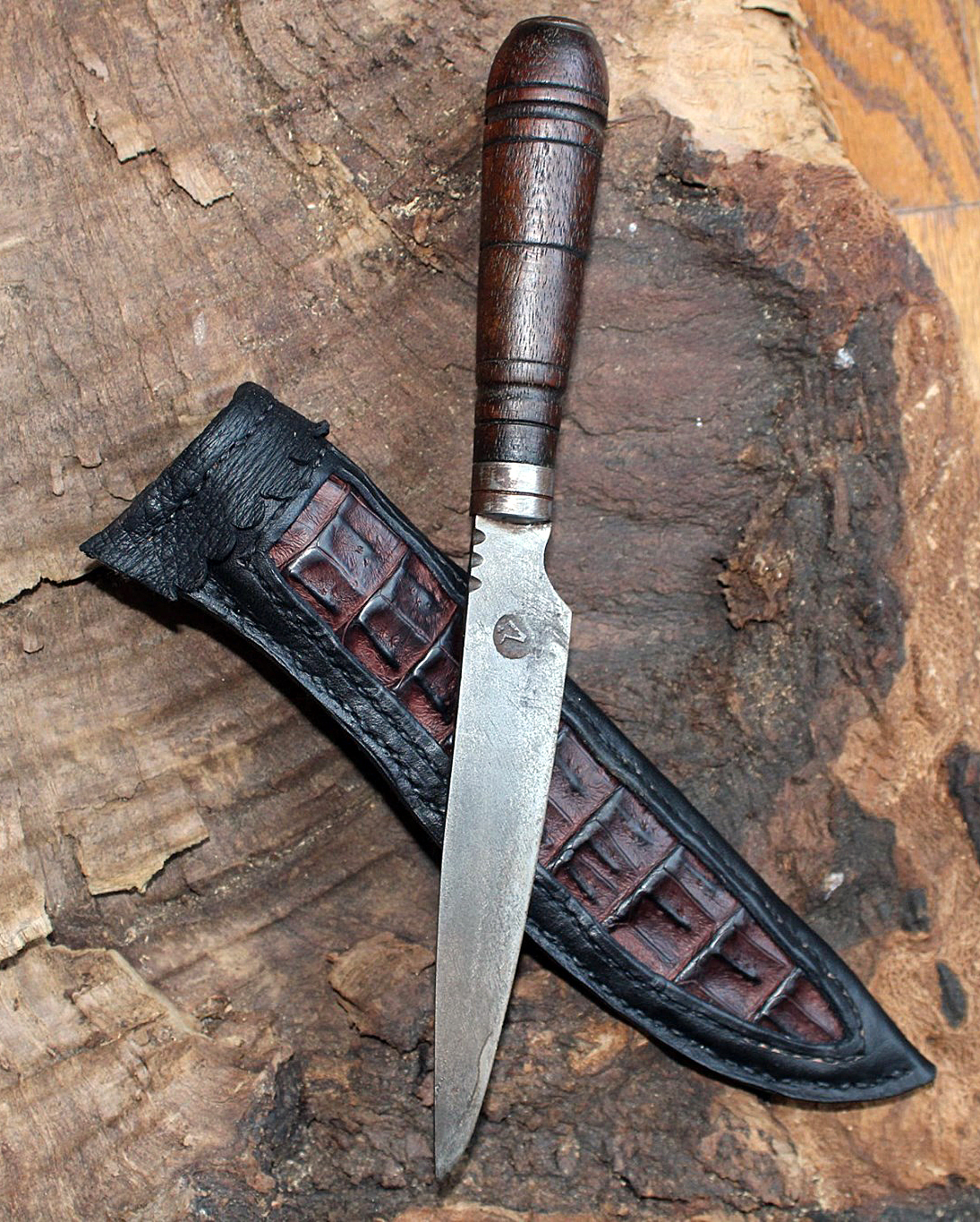 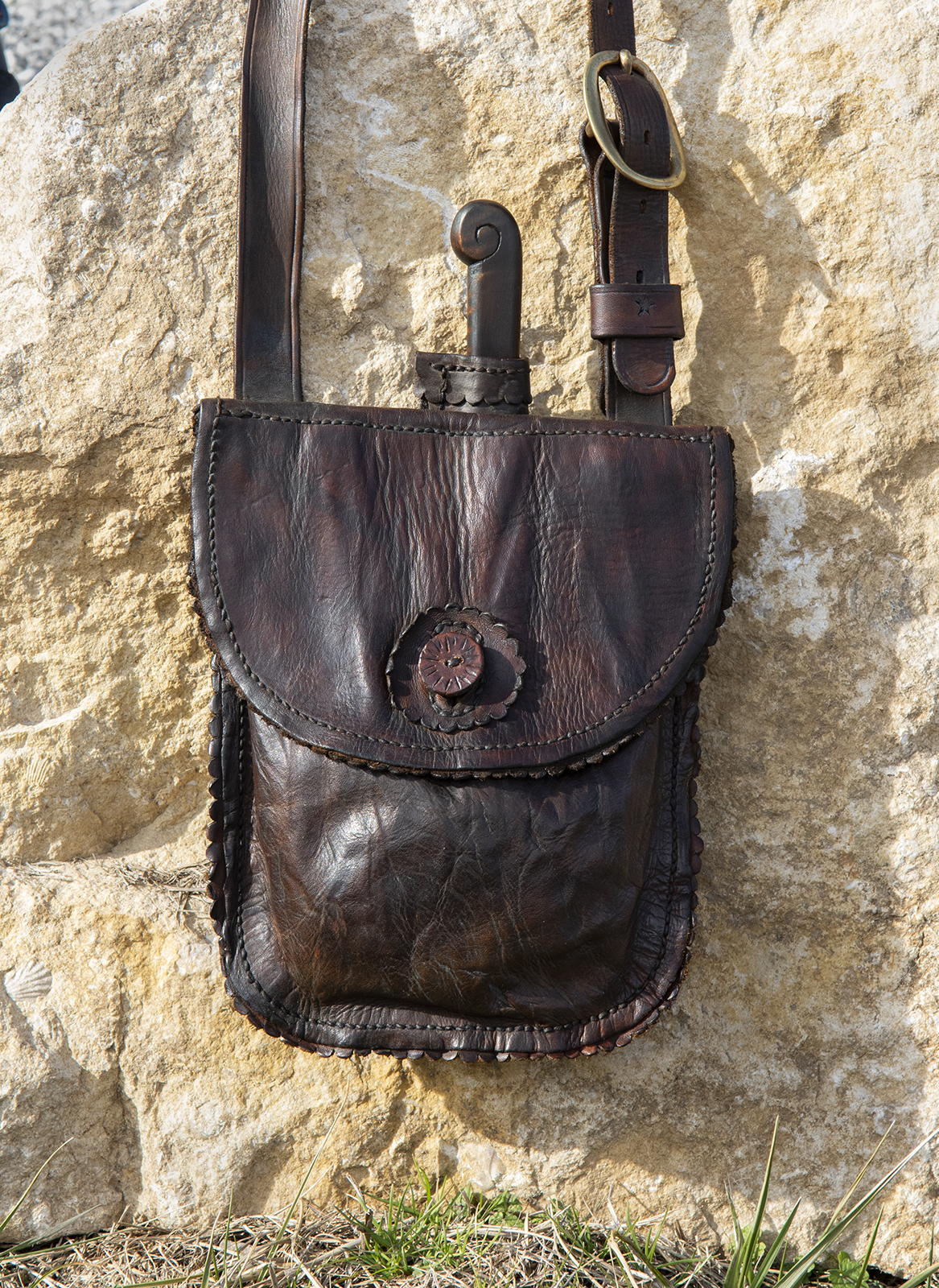 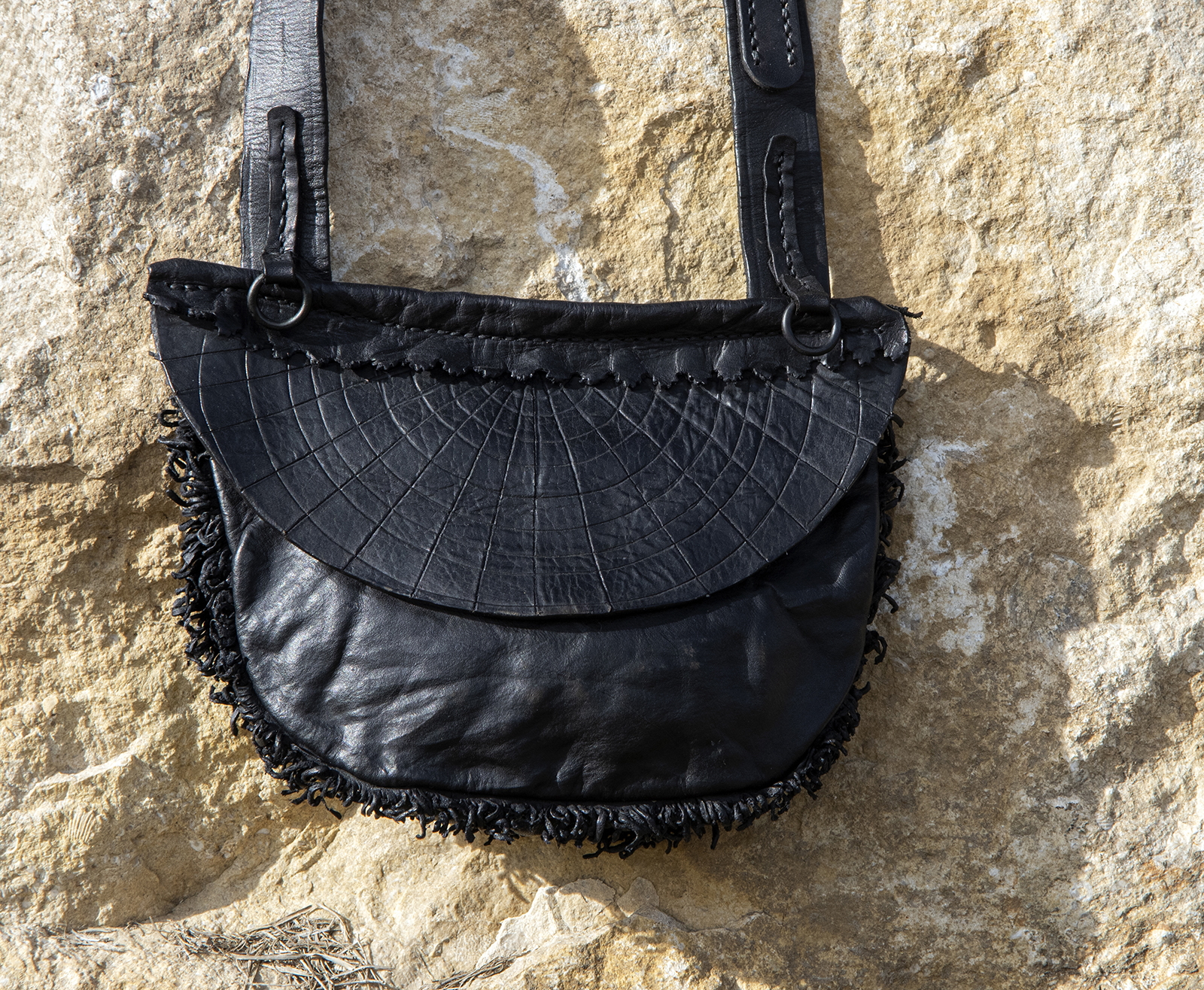 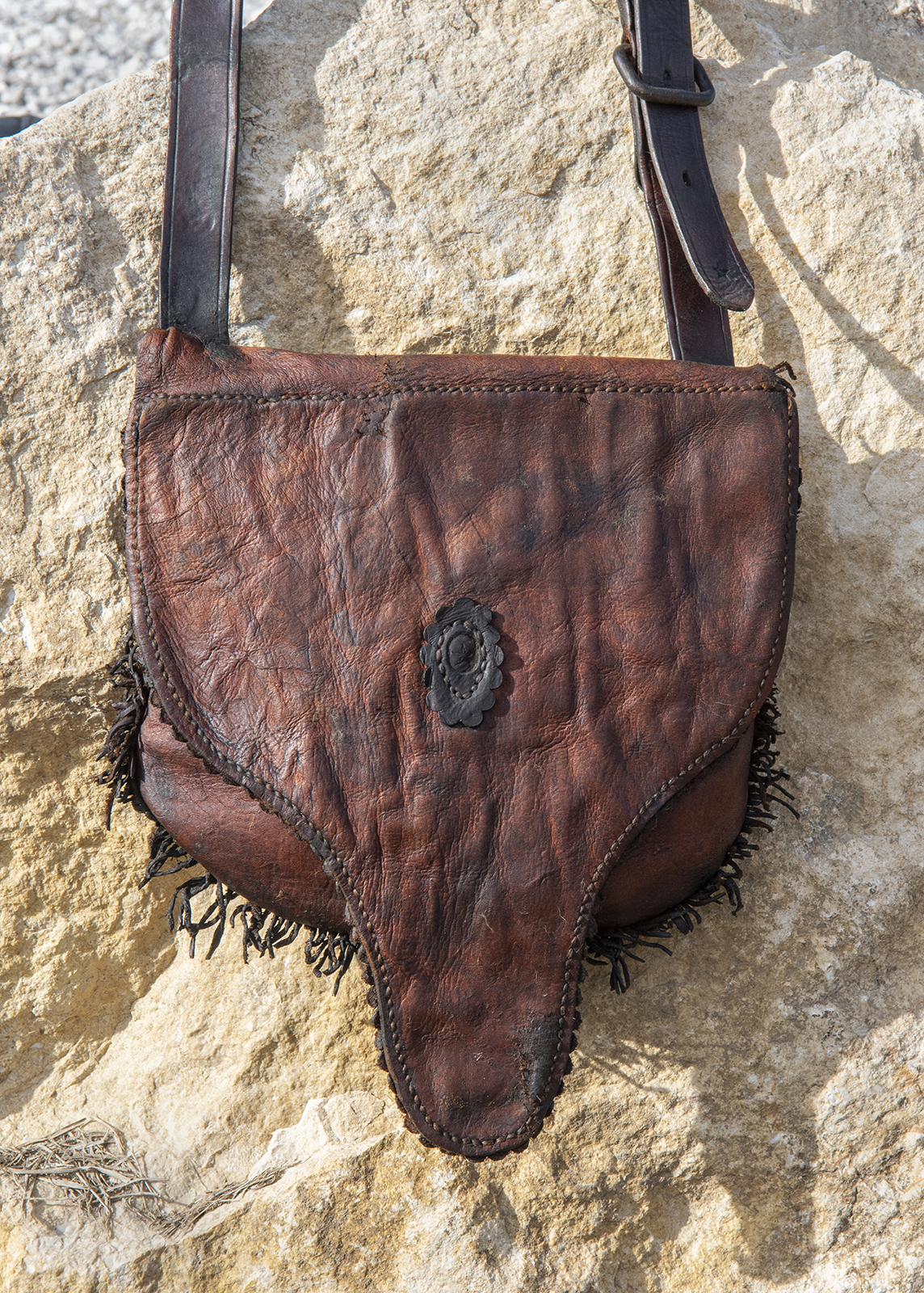 Eric says there is a fine line between tool collectors and those who use them. It’s a line few want to cross, but Eric is one of them. He feels using the old tools adds value to his work and makes each piece he creates more authentic.

“We collect these tools and put them back to what they were built to do,” he says. “My job is to preserve the legacy for the next people who come along. It all started with a hammer, it really did. I thought, ‘I’m going to be a blacksmith the rest of my life.’ A number of years ago I let that go and I found something that was comparable and artistic. I get to use old tools to do it.”

You can reach Eric by calling 573-721-8961, by sending email to eric.vanalstine@gmail.com or by searching for Eric Van Alstine on Facebook or Ironweed_Leather on Instagram.