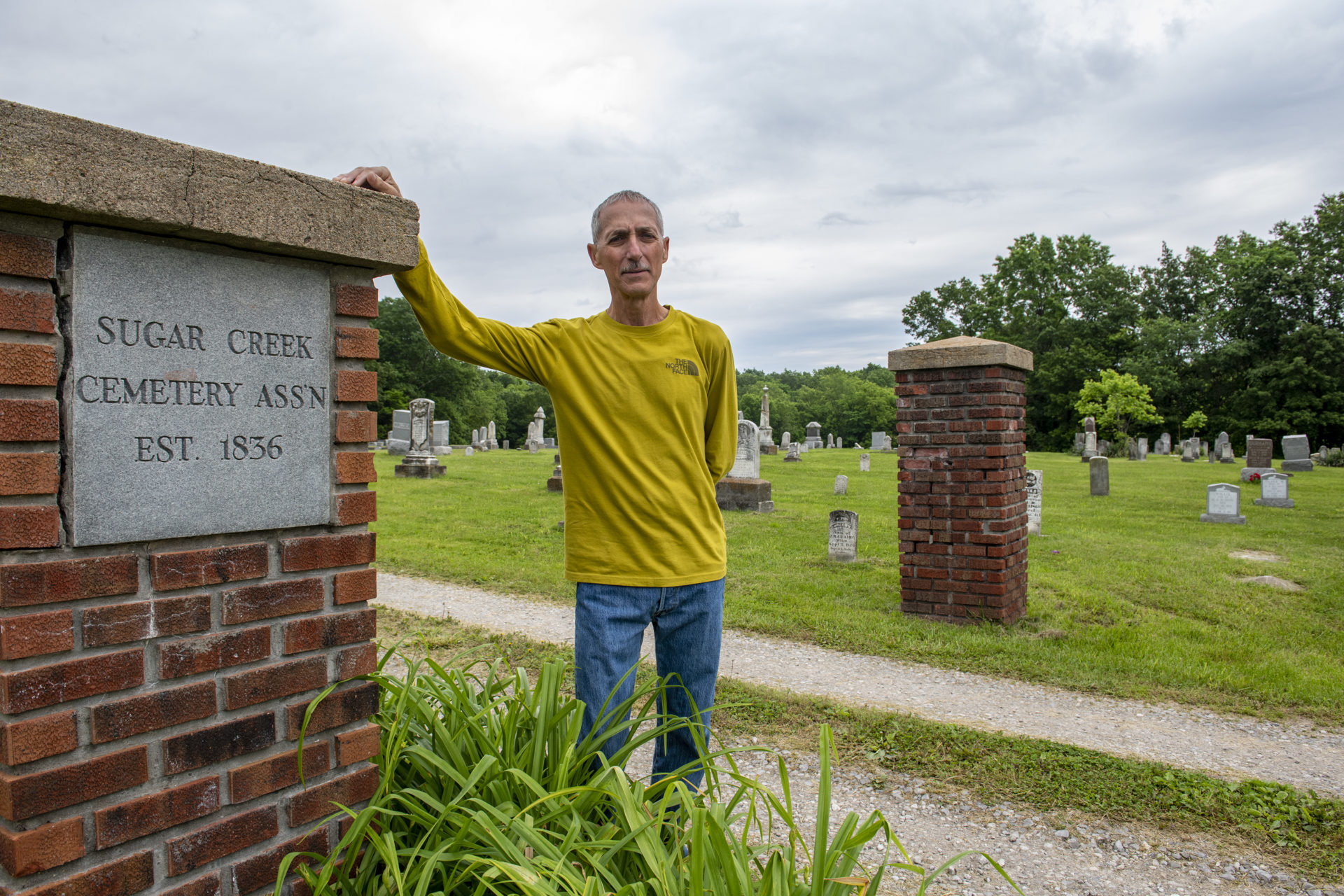 185 years of caretaking a community in Sugar Creek Cemetery

Visiting a final resting place in rural Missouri conjures images of the countryside: small churches set back from the road, shady trees casting shadows on a low hill and well-manicured grass surrounding headstones of polished granite and weathered marble. The bucolic scene is due to the efforts of a small but dedicated group of volunteers who manage the maintenance and business of the cemetery.

For the Sugar Creek Cemetery Association board members, there’s a sense of personal responsibility in caring for their own special place. Treasurer Tim Price inherited that quality from his father, the late Randolph County Sheriff Orville Price, himself a former board vice president.

“I knew Dad thought a lot of this place and I took it to heart,” Tim says, pointing out where his father, grandmother and son are memorialized. “I began to realize there’s a lot more to life than Tim Price.”

President Gary Kribbs recalls visiting the cemetery as a child with his mother and father, helping mow, weed and fertilize the peonies on the graves of his grandparents.

“Most of the people on the board have some tie to the cemetery from their family, so it’s out of love that we do this,” Gary says. “That’s where my family is buried and that’s where I’m going to be buried one day.”

Due to its lineage of caretakers, Sugar Creek is perhaps better suited than most cemeteries to weather time and the elements. Established in the 1830s, the Cumberland Presbyterian Church was located less than a mile northwest of the present-day Moberly city limits. A community sprang up on the banks of Sugar Creek including a school and the cemetery, where the first burial — a member of the local Rubey family — took place in 1836. It’s conceivable many of the cemetery’s early residents could have worshipped, been educated and interred in the same place.

The church burned in the fall of 1923. Although never reconstructed — the land where it stood was instead surveyed into additional plots in 1956 — it lived on in the memory of late Huntsville resident and Randolph County Historical Society member Jason C. Jenkins, who penned a poem titled “Musings About Sugar Creek Church.” 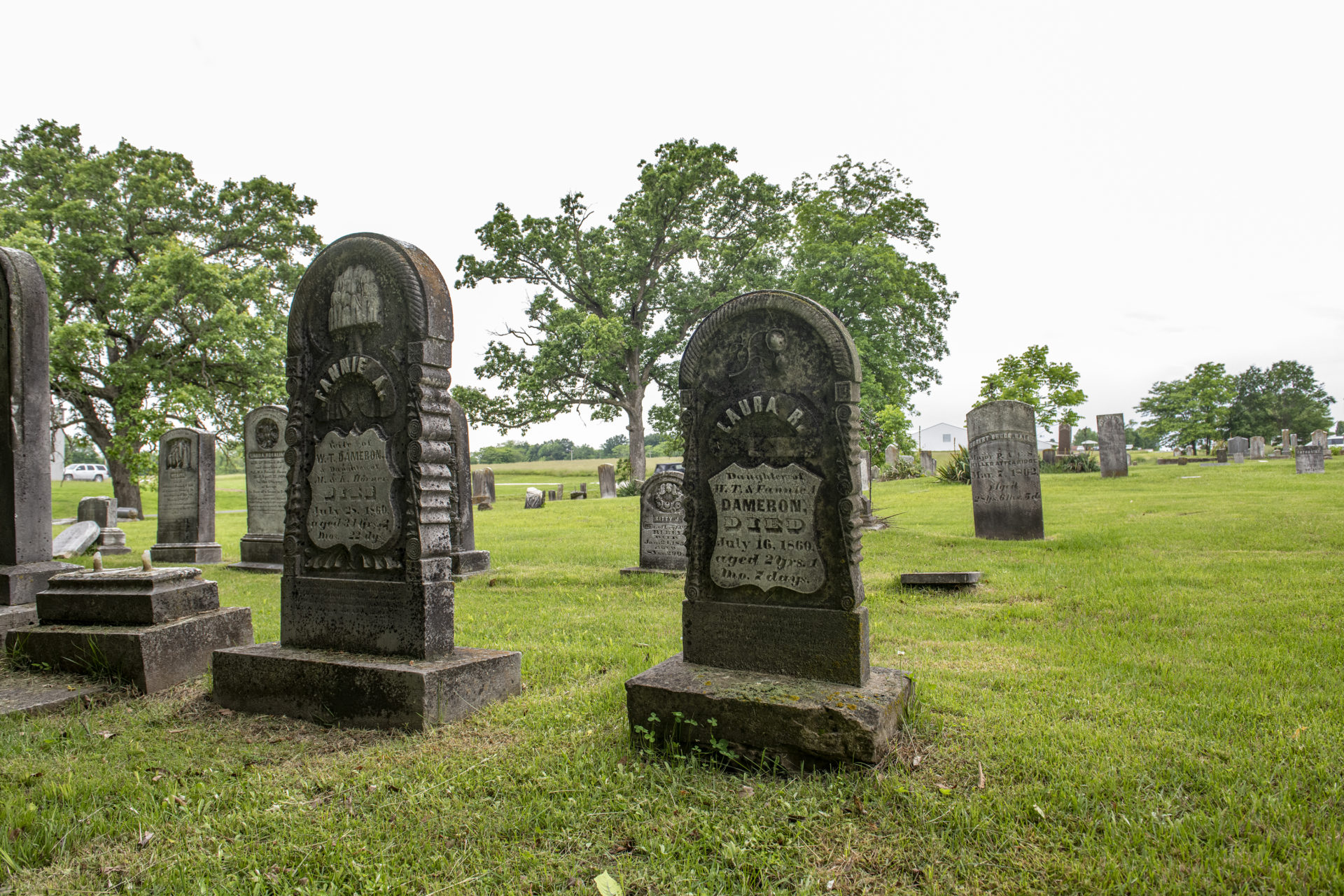 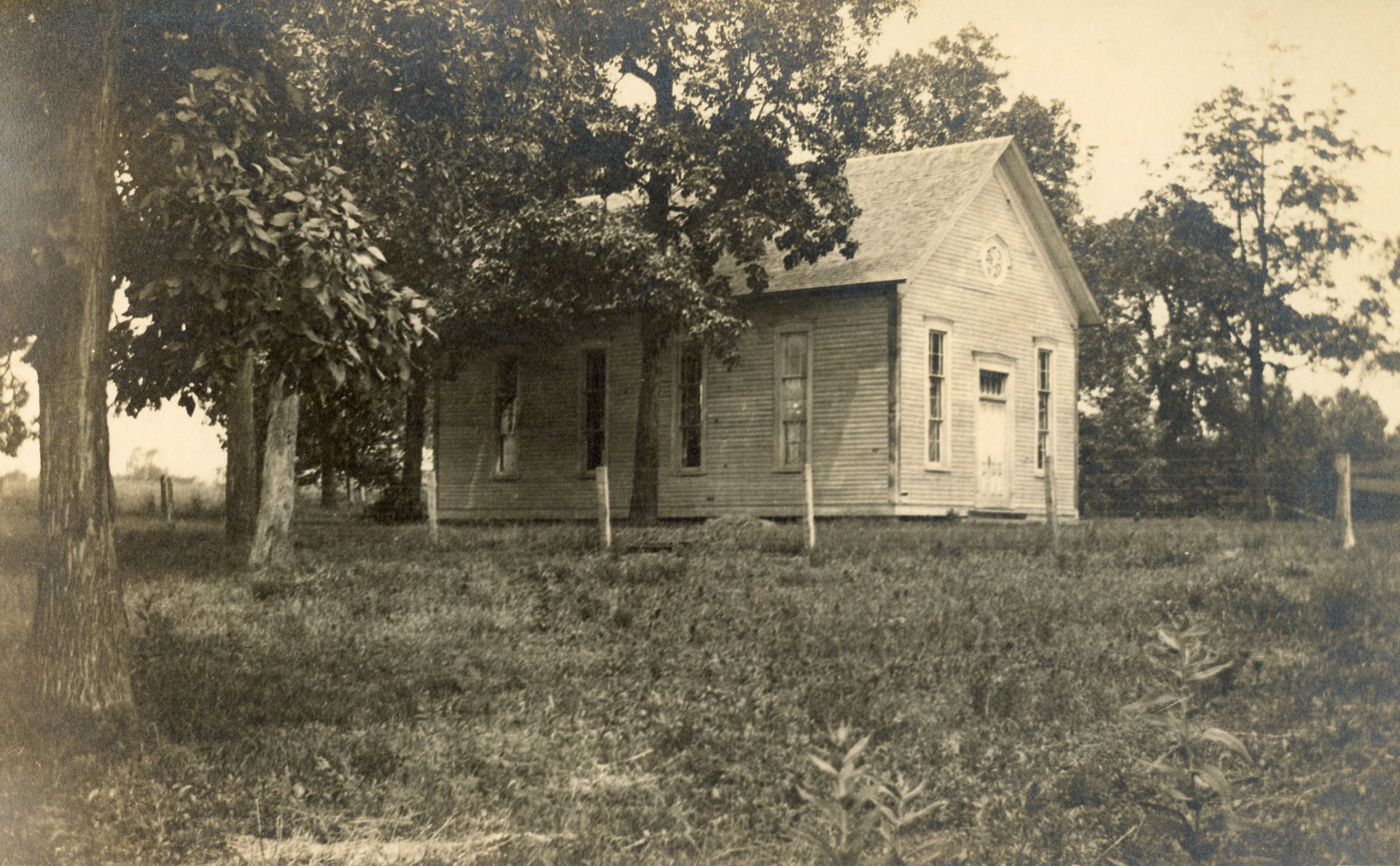 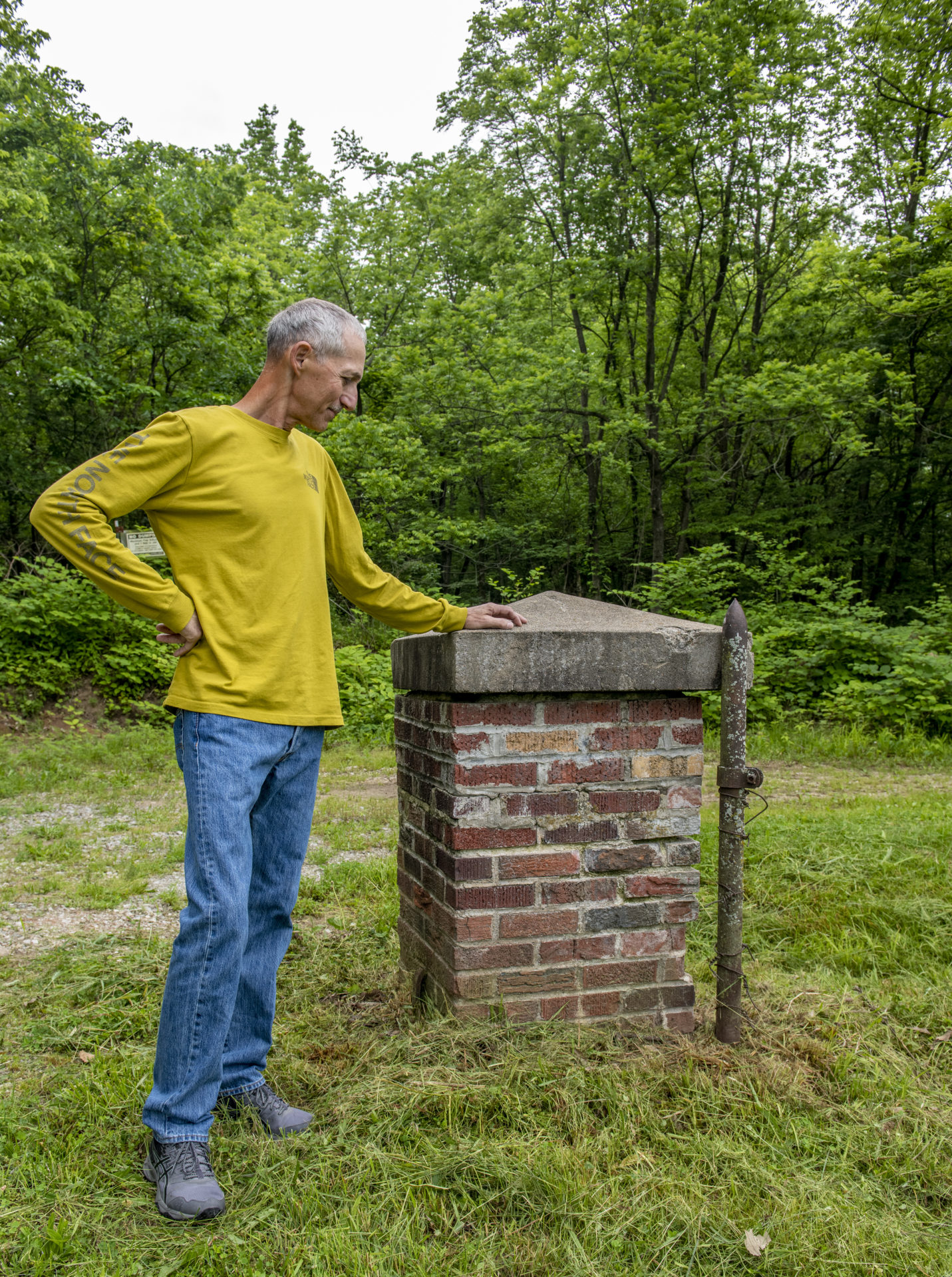 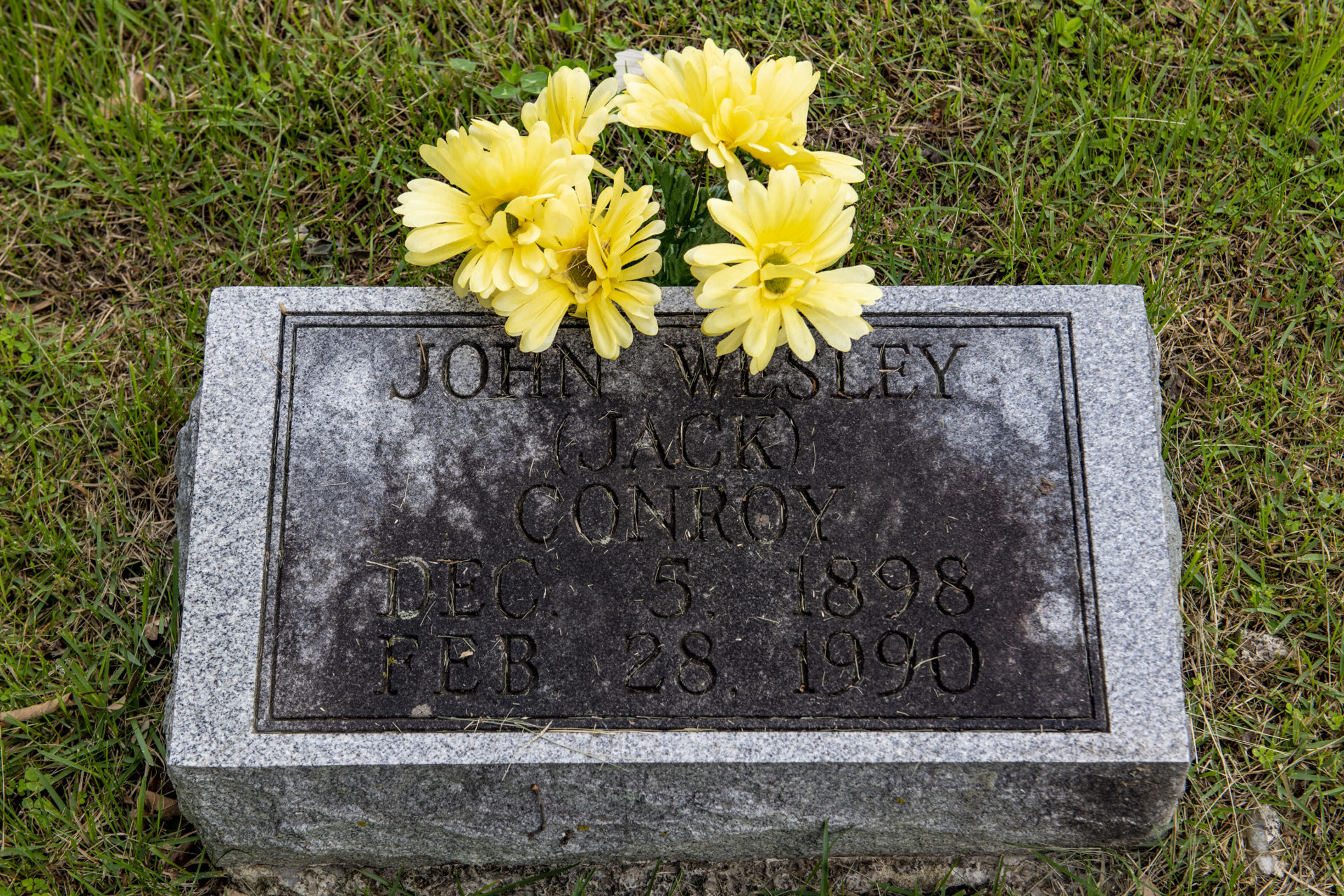 The church and school may be gone, but funerals continue at Sugar Creek. In addition to selling, recording and marking the lots, the cemetery association is charged with marking the gravesites for burials and performing or hiring out the regular upkeep. During Memorial Day weekend, board members can be seen greeting visitors and tidying the grounds. The board seeks input year-round on any additional projects the cemetery may need. Simple maintenance can be a difficult task: When it comes to managing the remaining dirt excavated from graves and removing decorations and memorials, the costs mount.

“My goal was to make the cemetery take care of itself by the time I died,” says Tim, who has served on the Sugar Creek board since 1985. “I’m not planning on dying for a long time, but we’re closer now than we’ve ever been.”

The board’s worries in 2021 mirror those of the cemetery’s caretakers more than a century before. According to a retrospective published in 1957 by the Moberly Monitor-Index and Democrat, a movement to create a self-sustaining endowment for Sugar Creek Cemetery began in 1919. Prior to that time, volunteers tended the churchyard a few times a year making minimal progress against encroaching vegetation and constant erosion.

Help came in the form of Jesse Rubey, a Moberly native and Kansas City businessman who visited his hometown on a genealogical mission. Upon learning of his connection to the cemetery’s beginnings, Jesse promptly made a contribution and advocated for the creation of a cemetery association, which was chartered by the state in 1922. Jesse would be laid to rest at Sugar Creek in 1956. His contribution, along with a donation from the estate of Logan Cunningham, pledges made by the then-current board members and AT&T stock purchased by board member Walter Buchanan, formed the basis of the endowment that still assists the association today. Along with the sales of plots and donations, the endowment helps meet the roughly $5,000 in annual maintenance costs.

“It’s finally getting to where it can pay for mowing and gravel as long as nothing else goes wrong, but things come up that you don’t anticipate,” Tim says. The strong wind that puts a tree into the cemetery road, the seasonal freezing and thawing that wreak havoc on the slabs and stone pillars and the occasional damage from visiting vehicles are harsh realities on the association’s bank account. But they have to be addressed to provide a place of peace.

That’s where the efforts of volunteers have played a significant role. A retired businessman from the community has repaired some of the aging headstones which have cracked and broken due to erosion and vandalism. Others cataloged the grave markers for www.findagrave.com, a popular resource for genealogy research. As of June, 92% of the cemetery’s stones have been recorded. These projects are a great help to the board, who have limited information on who may have been buried and where.

“I just know if someone bought lots, and sometimes I can’t even tell that for sure,” Tim says, referencing the survey map. When he and Gary joined the board, they inherited cardboard box archives kept by their predecessors, which consisted of handwritten notes concerning the transactions. “A lot of times they’d just write ‘so and so bought this plot’ on a piece of paper. That’s the way information was transferred.”

In the same way, the board members hope to confer their commitment to Sugar Creek Cemetery on to new, younger members. Presently the board has strong representation with 11 volunteers, but they only have to look to the past to know that number waxes and wanes. The end of life isn’t top of mind for many people who have yet to enter the autumn of their years, but as Tim found out nearly four decades ago, the call to keep caring for a community after members have passed on may find you at any time.

“It builds character,” Tim says. Although he says it with a hearty laugh, he’s earnest. “It will make them a better person.”