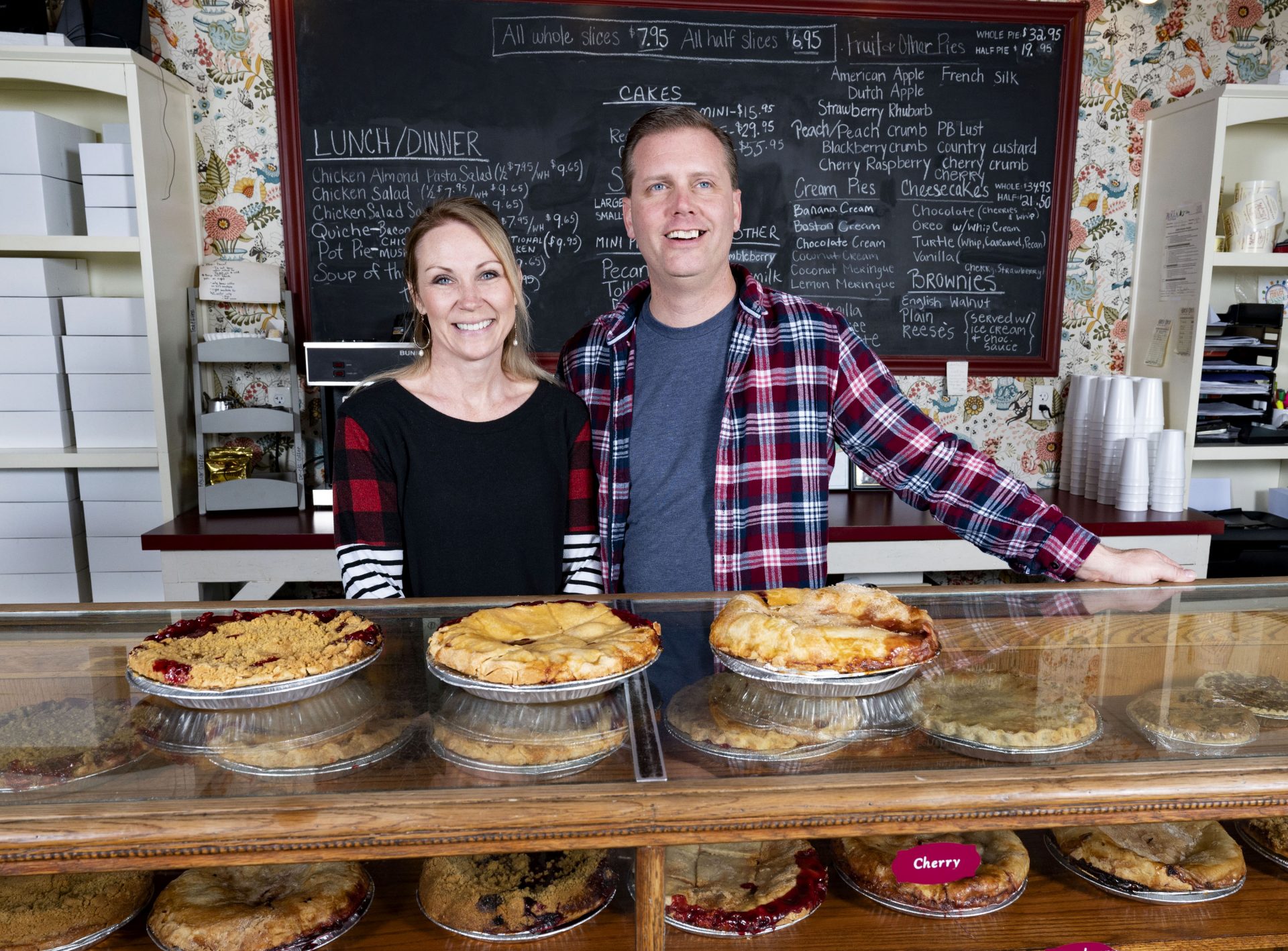 When you walk in the door the aroma almost stops you in your tracks. The sweet smell of an American Apple, Red Velvet or Boston Cream pie is reminiscent of pie shop co-owner Ryan Warnol’s childhood.

“My great-grandparents had the first city bakery in Dixon the year they were married,” he says. “I remember seeing my great-grandma have pies sitting out all over just like you see in here now. I can still remember smelling those pies whenever I was over.”

For more than 35 years, A Slice of Pie in Rolla has been dishing up sweet and savory pies to hungry customers. The store opened in 1986 under the ownership of Ron and Mickey Hopson until Ryan and his wife, Katherine, purchased it from them nearly four years ago. Today, they dish out approximately 100 pies per day to sweet-toothed students, locals and passersby in their store not far from Route 66.

Ryan started working for the Hopsons when he was studying to become a teacher at Missouri S&T. He was able to see firsthand the TLC the Hopsons put into their pies and customers.

“I really got into baking. I got to see how they had their systems set up to make the homemade pies efficiently, but more importantly, consistently,” Ryan says. “This place just had such a great culture when I worked here, it was kind of my second family. They sold it to us because they knew that we wouldn’t change that and we would work the store.”

After college Ryan went on to teach around the southern part of Missouri and Katherine worked in restaurants and in the medical field as they raised their five kids. “We were looking for something new to supplement what we had or to help us retire from our jobs,” he says. “I thought back to the pie shop I worked at in college and thought that was a perfect fit.”

They looked at opening a shop in Branson, however when the opportunity to purchase the shop Ryan worked at decades earlier came up, it was an easy choice. They took over in June 2018 and continued serving the mouthwatering sweet treats the shop had been known for.

Their plans changed just 11 months later when a small fire caused enough smoke and water damage that the small store right next to campus was rendered unfit for use. 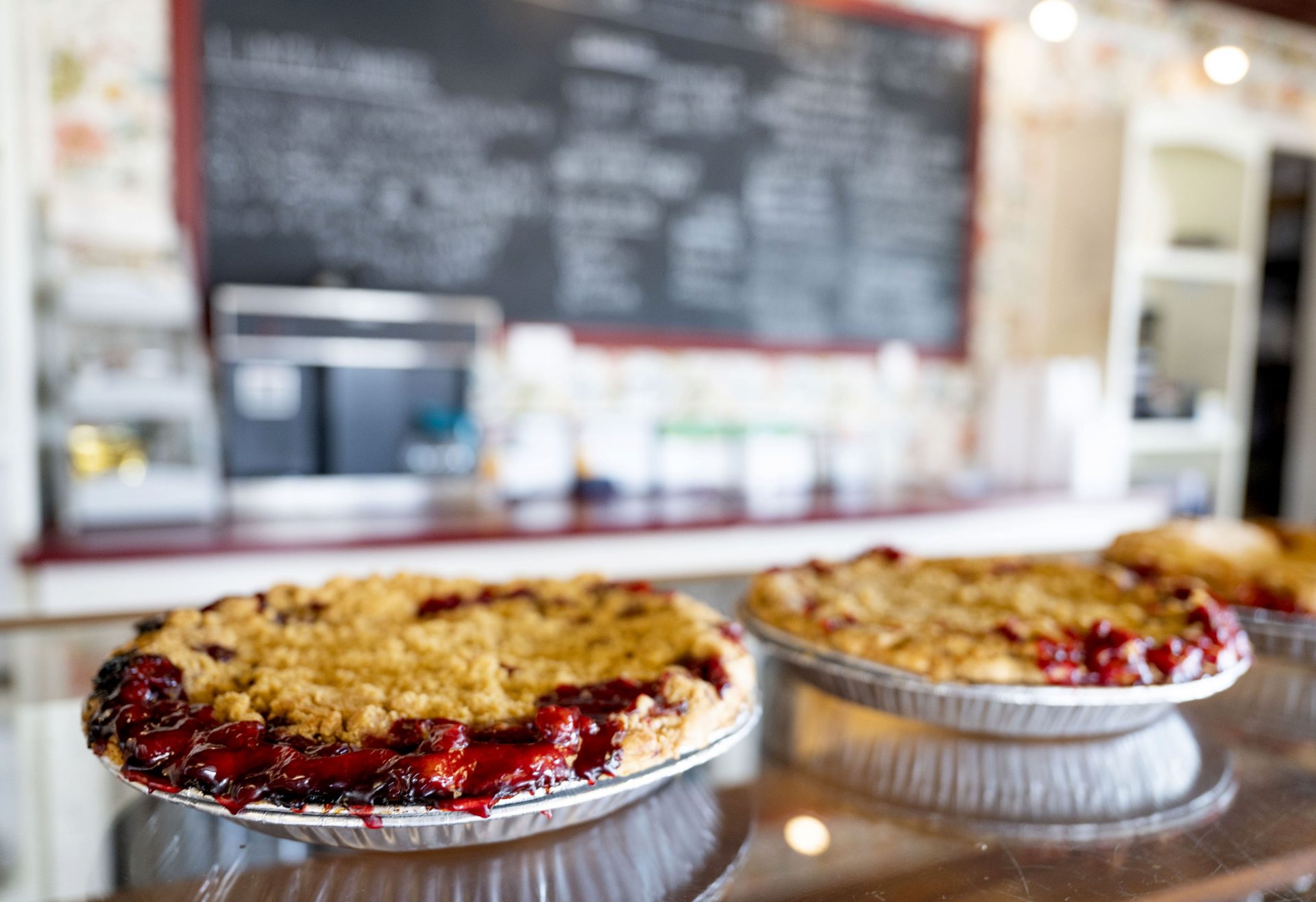 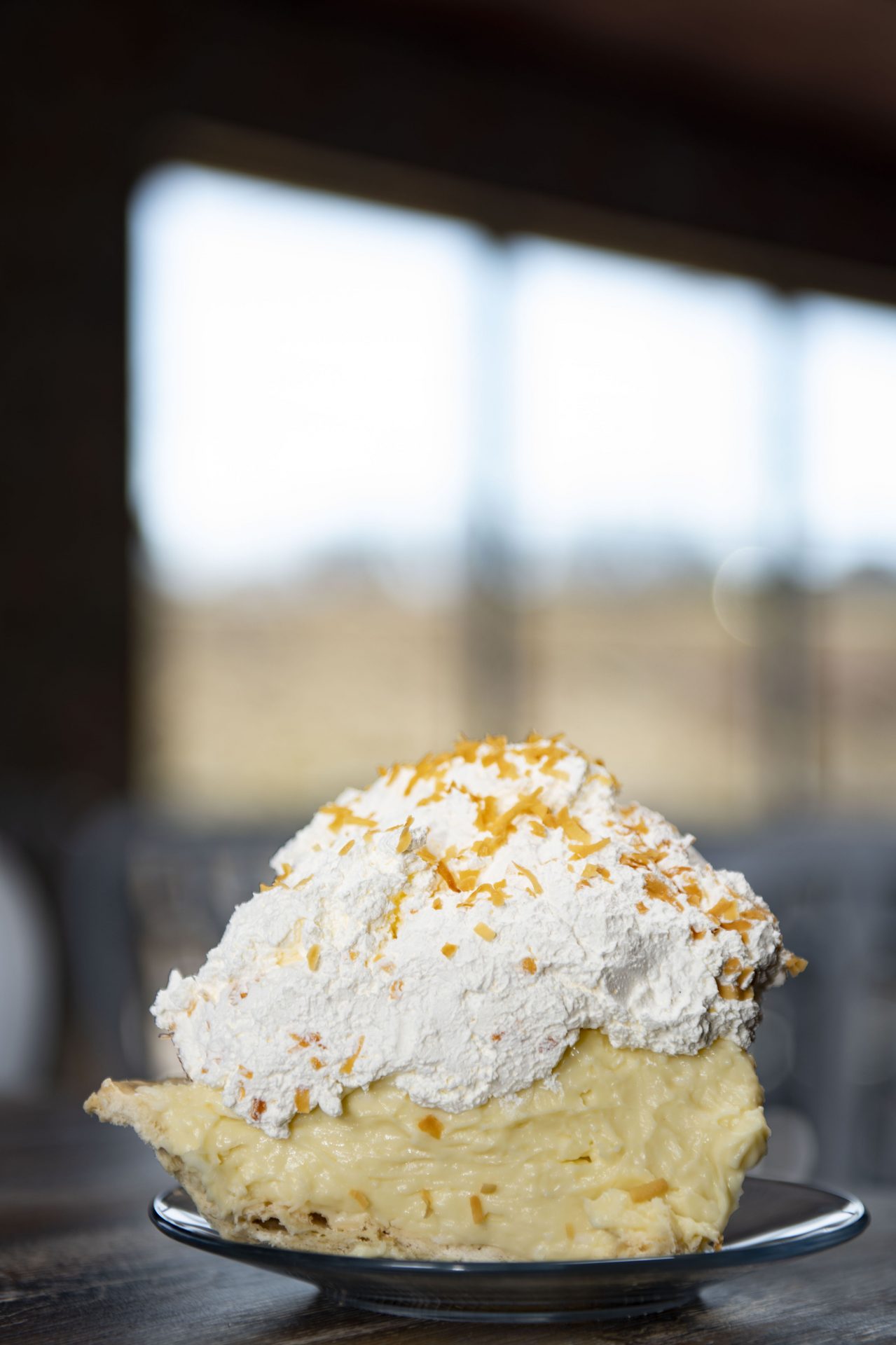 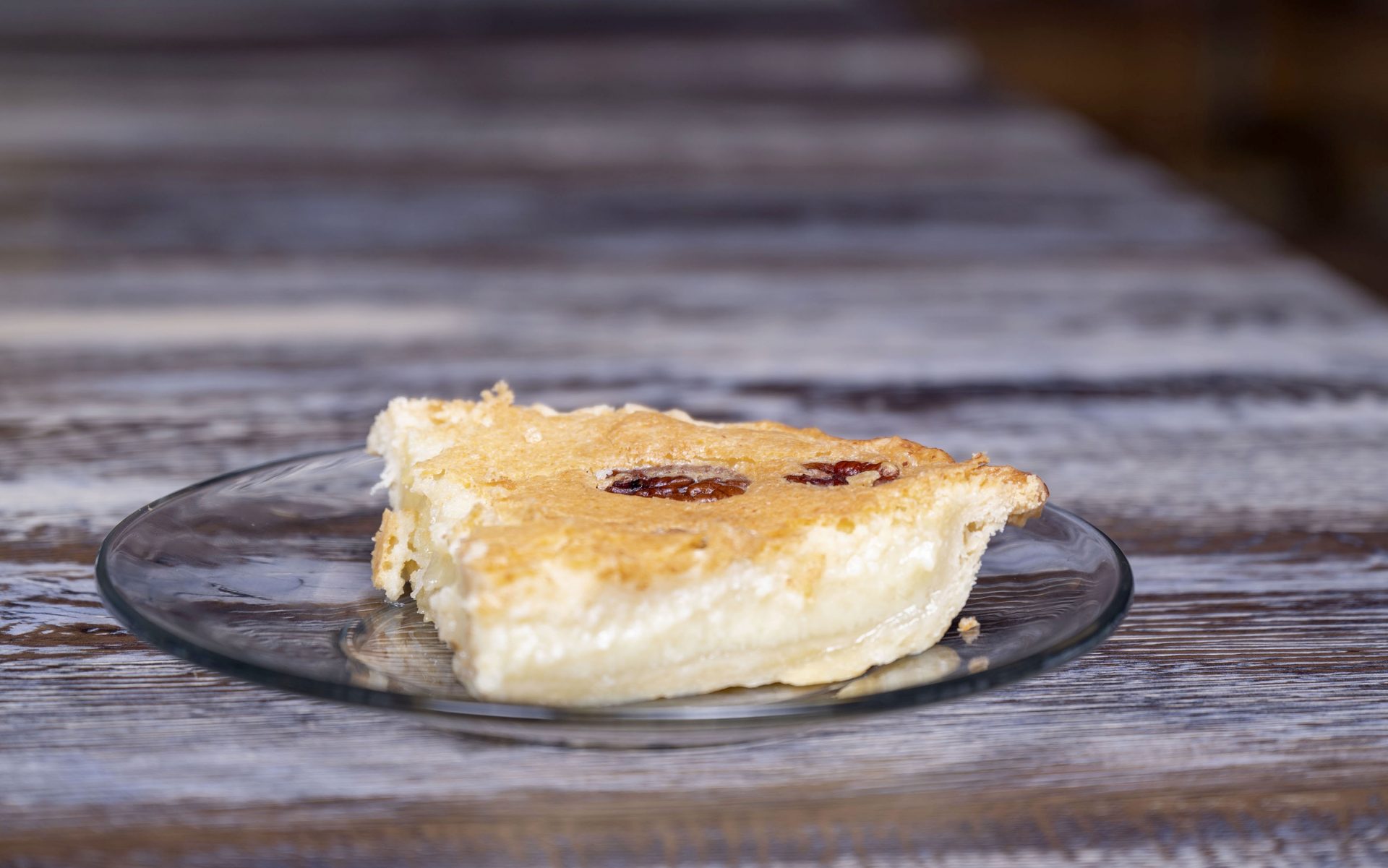 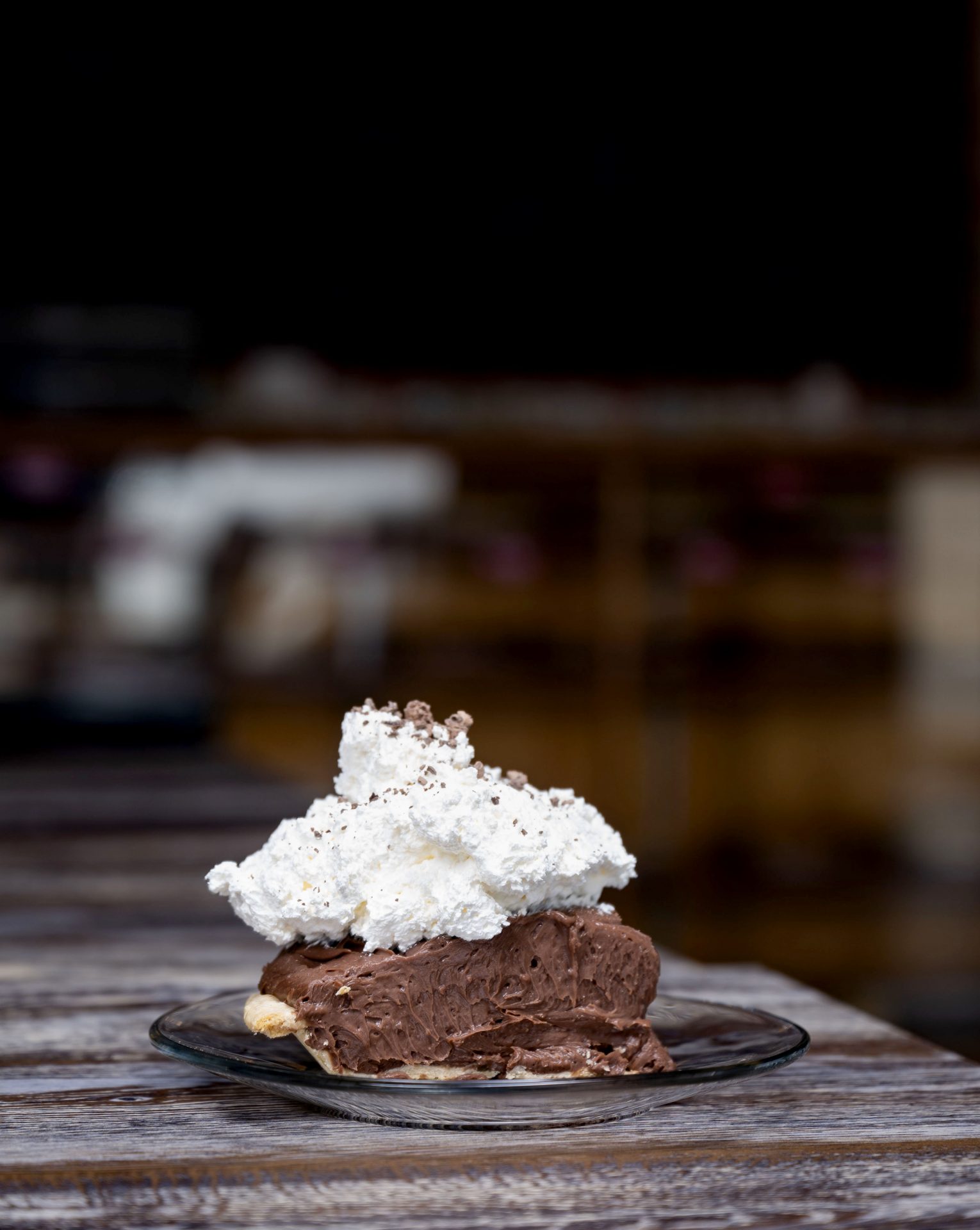 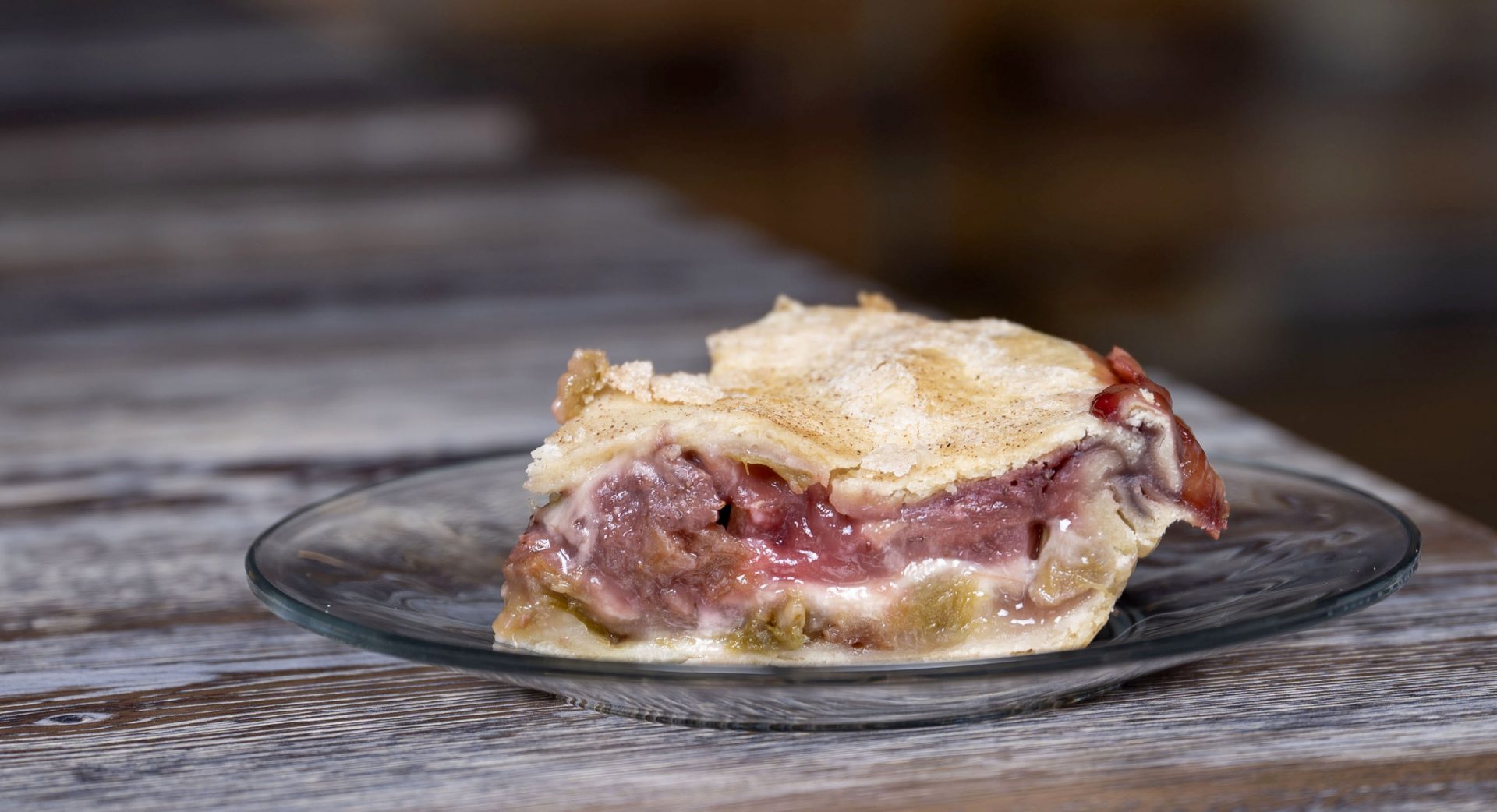 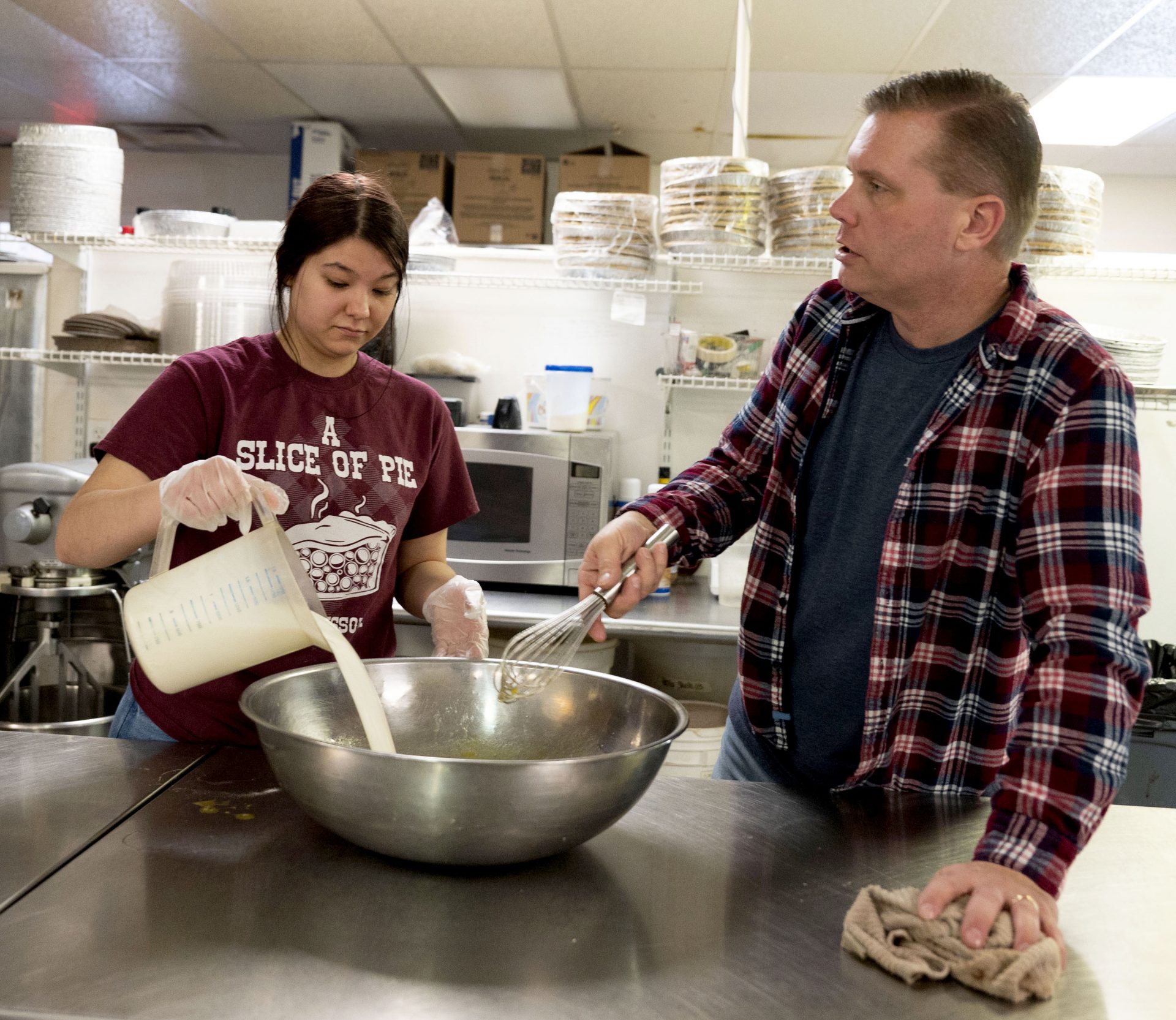 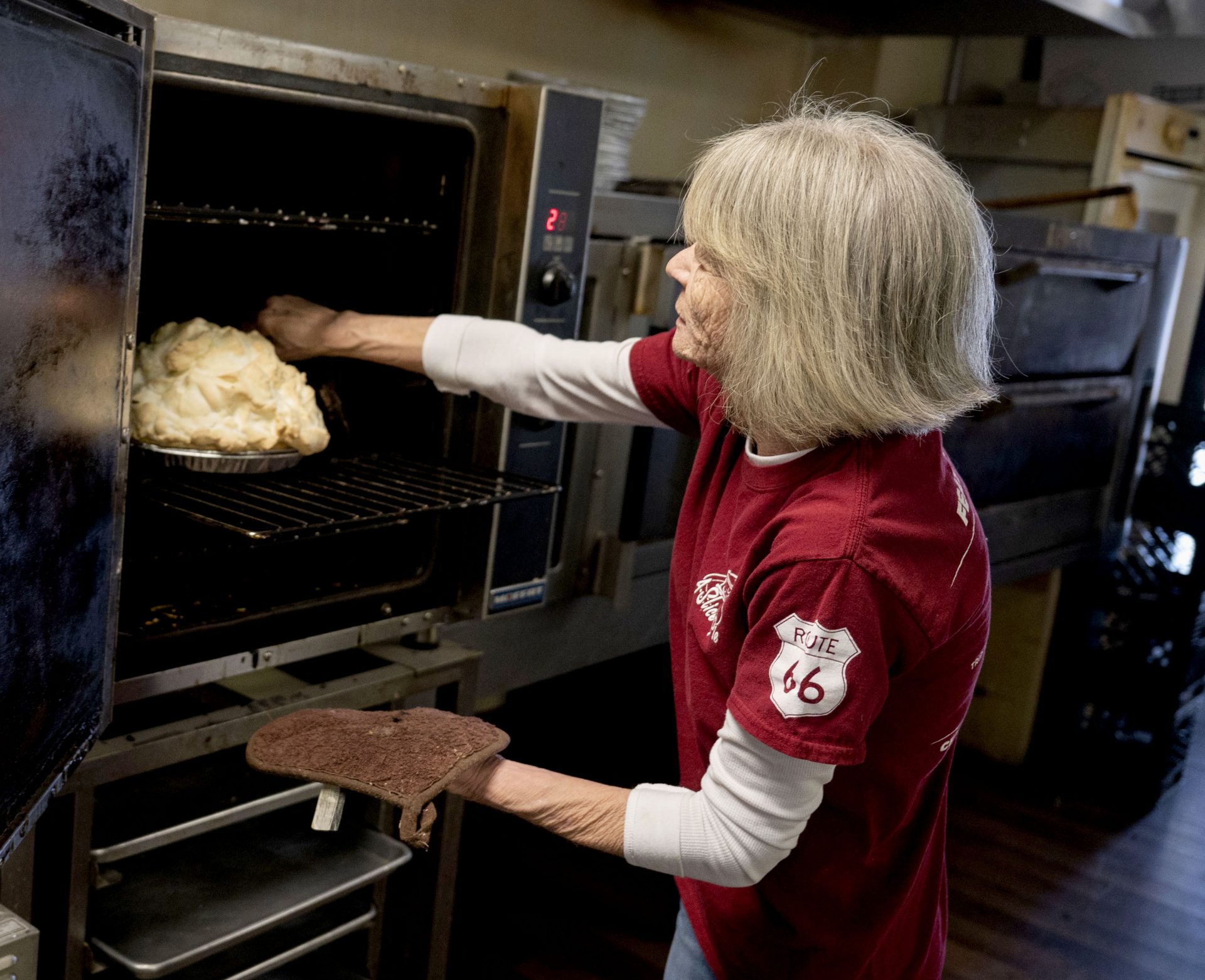 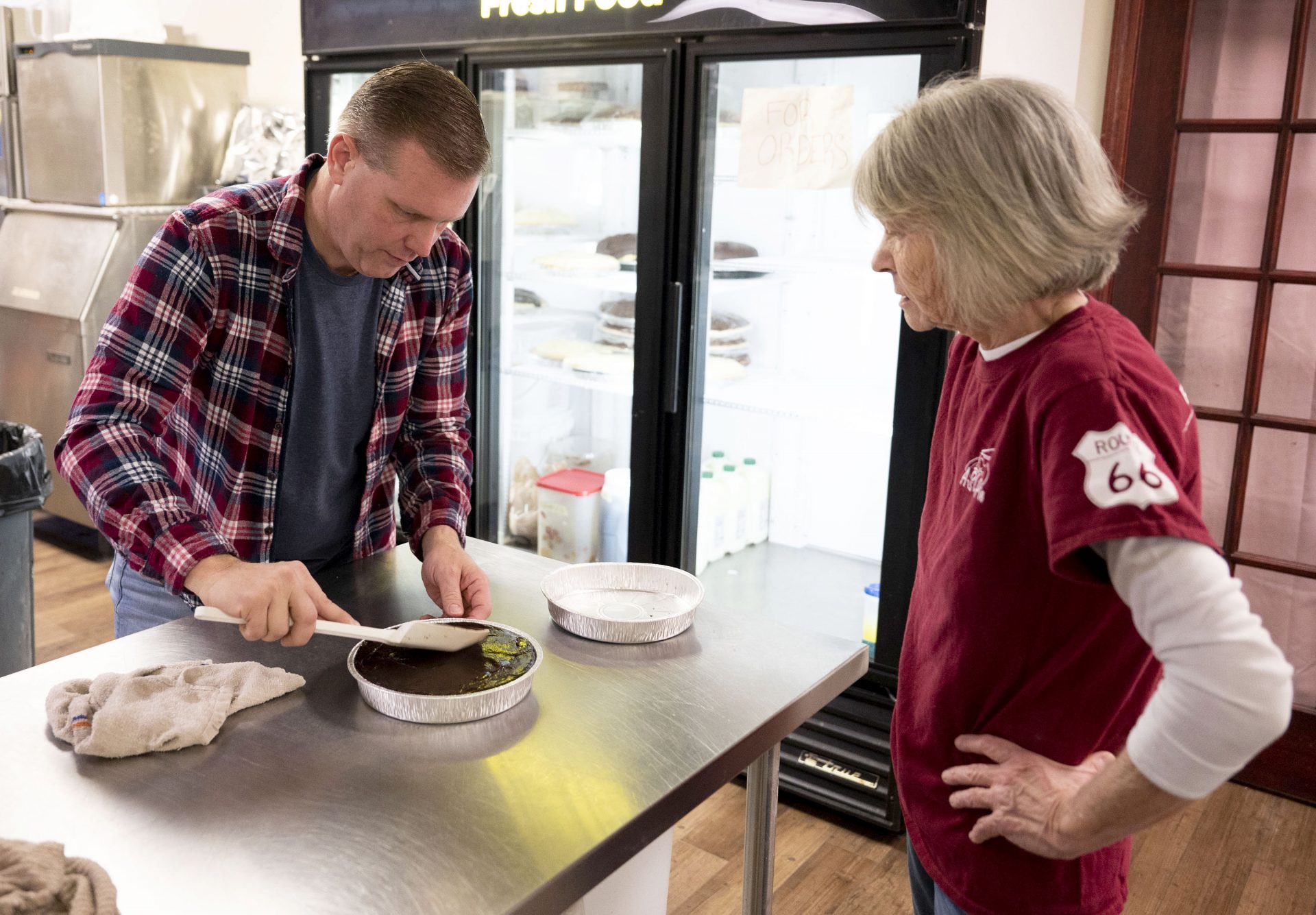 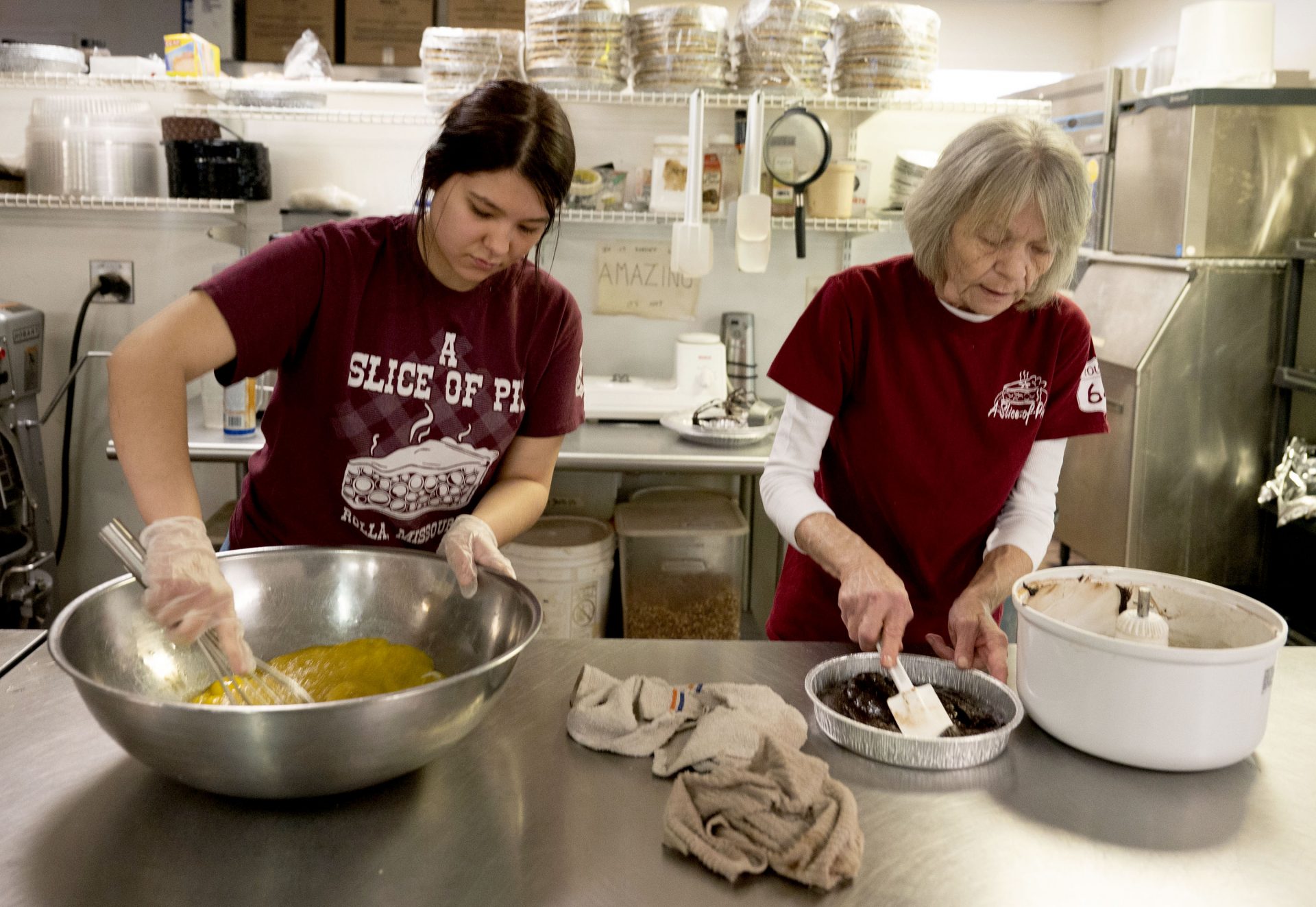 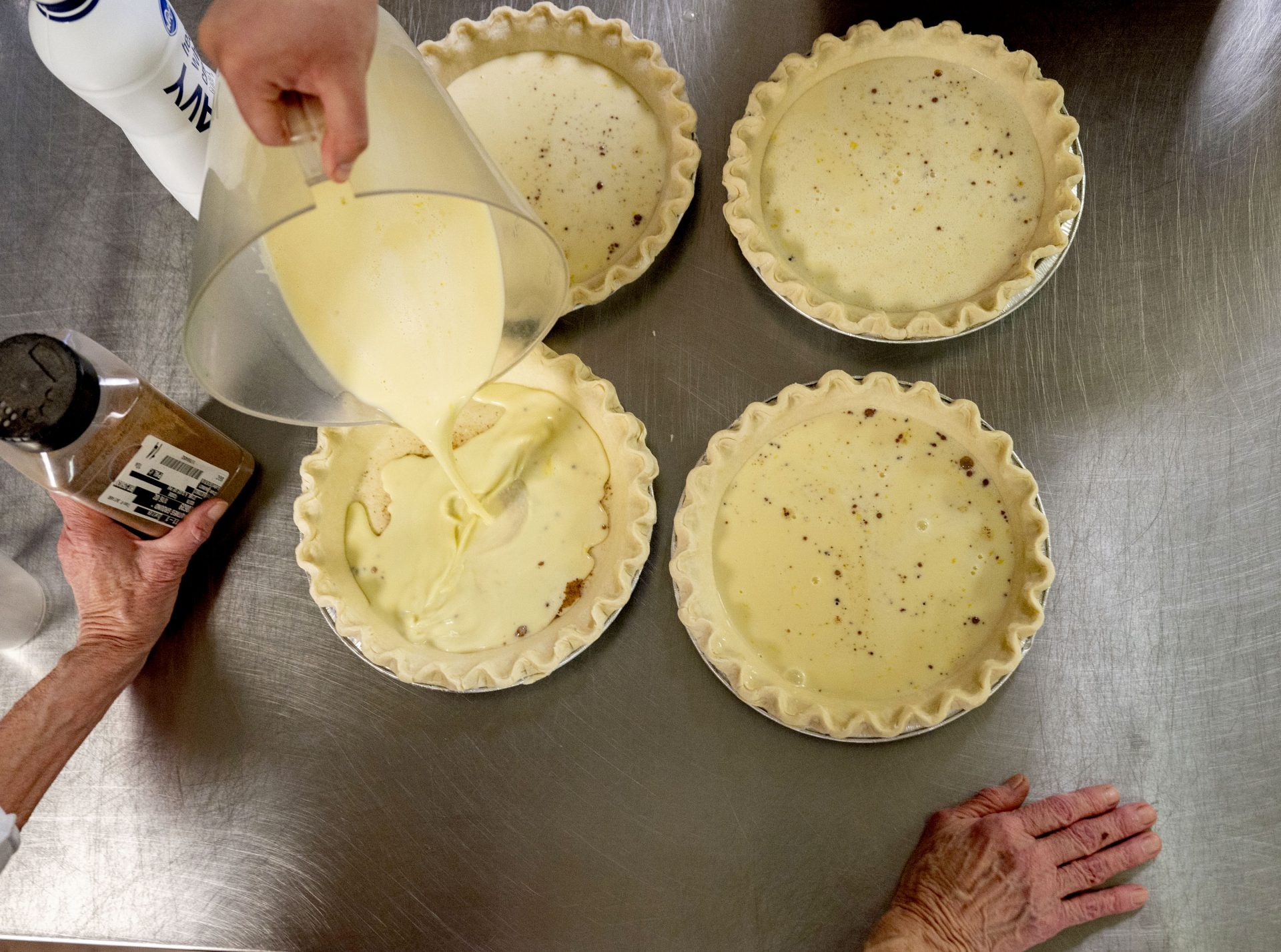 “We didn’t have time to figure out what the next move would be or how long the building would take to get repaired, so we started looking for a new place,” Ryan says. “I never had any intention of leaving that original building, you know, don’t try and fix something that’s working.”

They found a new location about a mile south that offered a much larger kitchen, seating area, office space and a private event location decorated in the same fashion as the original restaurant — including the pictures on the wall. They’ve since opened a second location in St. Robert as well as a small coffee shop a few doors down from the Rolla location.

A Slice of Pie offers about 60 different pies, cheesecakes and brownies throughout the year, with about 40-45 available daily. Coconut Cream pie is the runaway customer favorite. The popular pie features a plentiful portion of coconut filling topped onto a housemade crust. A heaping helping of whipped cream nearly turns the horizontal pie vertical.

Apple pie is the most popular fruit pie with options including an old-fashioned apple pie or the Dutch Apple pie featuring a crumble over the top. Other options include Katherine’s family recipe for Buttermilk pie as well as Country Custard, Peanut Butter Chocolate Swirl, Lemon Meringue, Quiche, Pot Pie and Brumbleberry with blueberry, blackberry, strawberry and raspberry.

The Warnols — members of Intercounty and Gascosage electric cooperatives — say that like any business in Rolla, they are dependent on the faculty and students from Missouri S&T. No day is that more evident than every March 14, Pi Day.

“Pi Day is huge for us, almost as big as Thanksgiving,” Ryan says. “It’s an engineering school and everyone is getting excited for the St. Patrick’s Day celebration. We’re really busy. Our March pie of the month is Bailey’s Irish Cream. Typically we have a line out the door from the time we open to when we close.”

A half or whole slice of pie costs around $7 and whole pies go for $33 to $35. “You get what you pay for,” Ryan says. “If you want something that absolutely stands out and has a record of quality, consistency and size, we’re your place.”

Ryan and Katherine are glad to be able to serve their neighbors and carry on the tradition Ron and Mickey started. “We get to be a part of something that is so important to so many as well as their family gatherings,” Ryan says. “Then we get to pass something down to our kids and carry on this great business generationally.”

A Slice of Pie