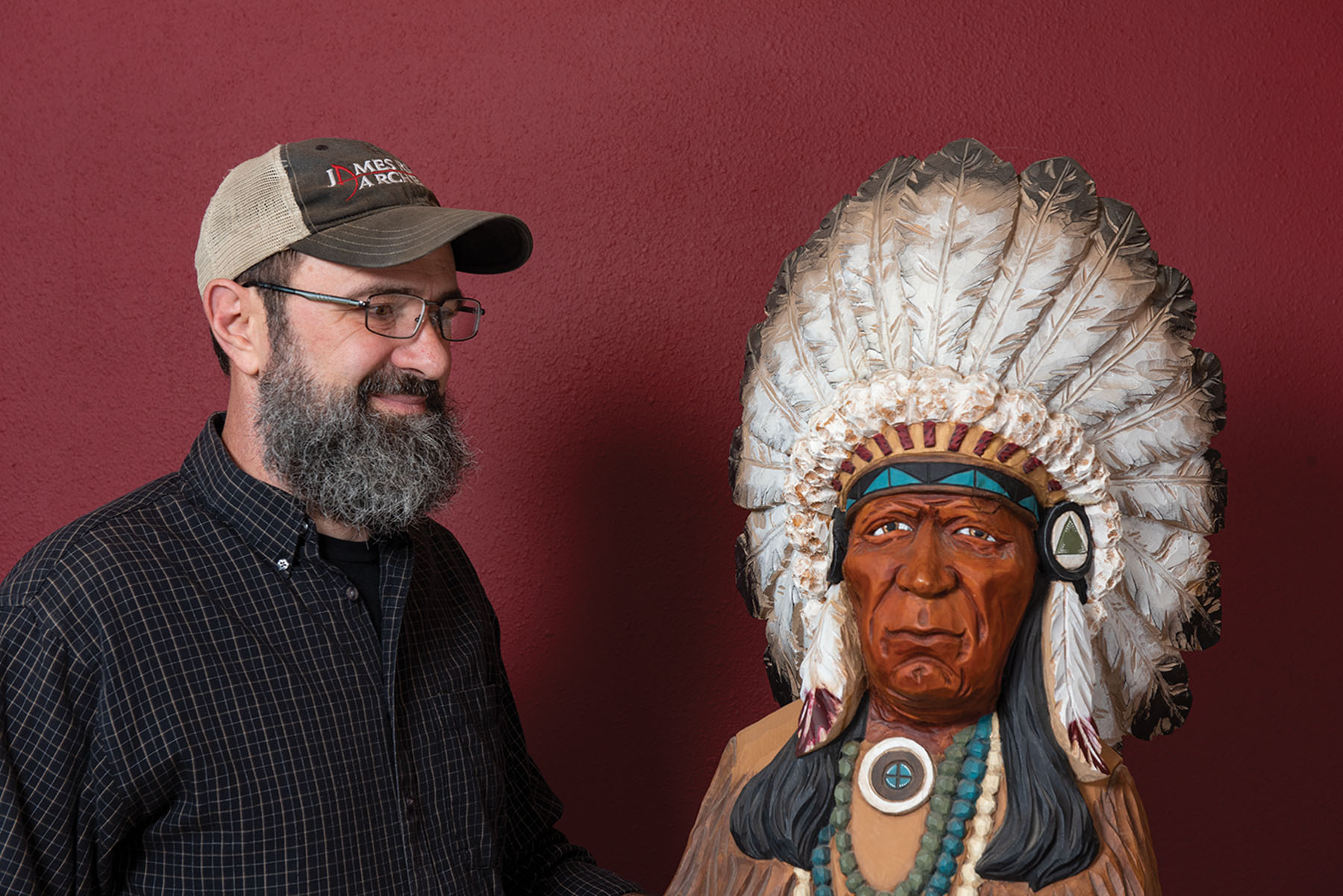 Brent Foster honed his carving skills from an early age

Looking for the right words to describe his lifetime of carving wood, Brent Foster calls it a “journey of self progress.” He recalls getting started at the tender age of 8, watching an experienced friend whittle a piece and deciding he could do it too.

Brent armed himself with his dad’s telephone lineman knife, grabbed a chunk of wood and worked on shaping soda bottles, birds and the like. “I just picked up the knife and gave it a whirl,” says the Southwest Electric Cooperative member.

As his skills developed the youngster worked side by side with the woodcarvers at Silver Dollar City, much to the delight of those visiting the Branson theme park. Flash forward to today and Brent stands in an almost-completed gallery on his farm near Humansville surrounded by his latest efforts. Most are near-life-sized, three-dimensional American Indians, painstakingly carved from huge blocks of wood. Others fit on shelves but were crafted with just as much care and concern for detail as the larger ones.

“I focus mostly on western art but I haven’t eliminated Santa from my playbook,” Brent says. Indeed, the shelves include several interpretations of the jolly elf, each with a distinctive touch that sets his pieces off from the work of other carvers. For example, Brent likes to carve flowers and birds into his Santas. He will stretch out the typically plump proportions for a tall Santa. And for a group carving of Mr. and Mrs. Claus he made them barefoot like Ozark hillbillies. 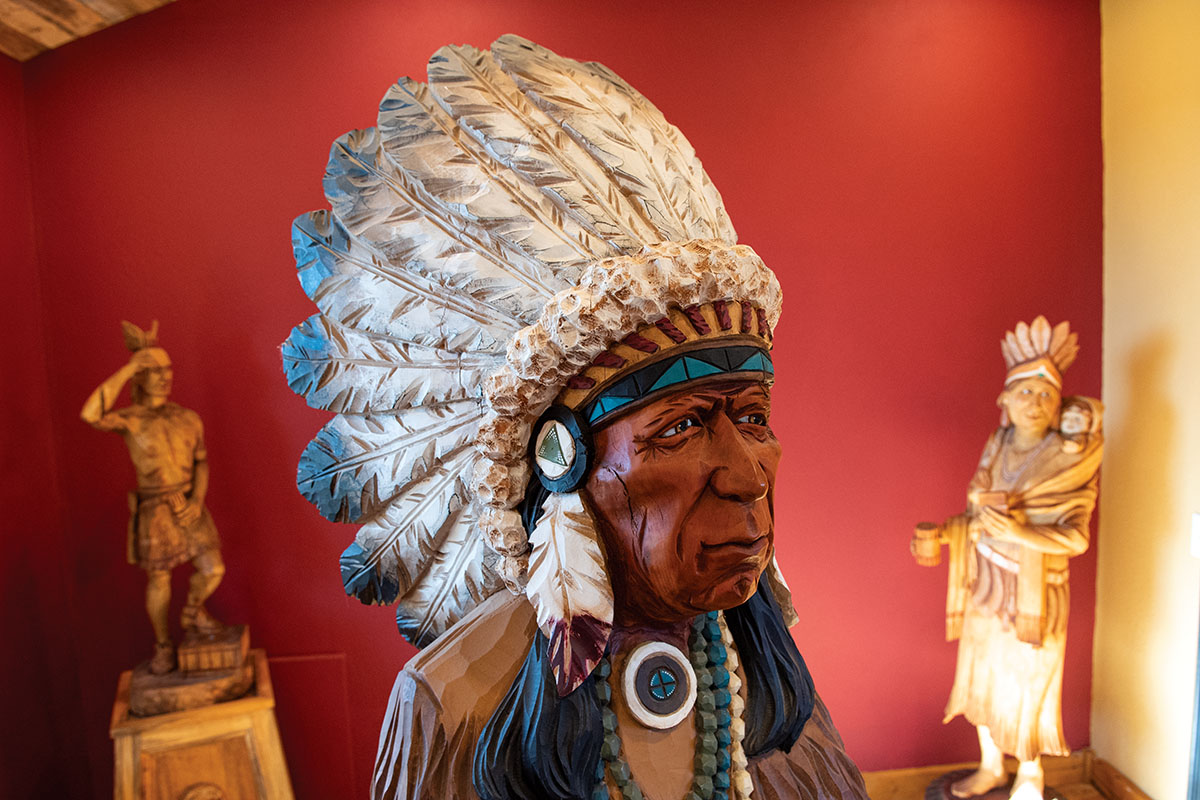 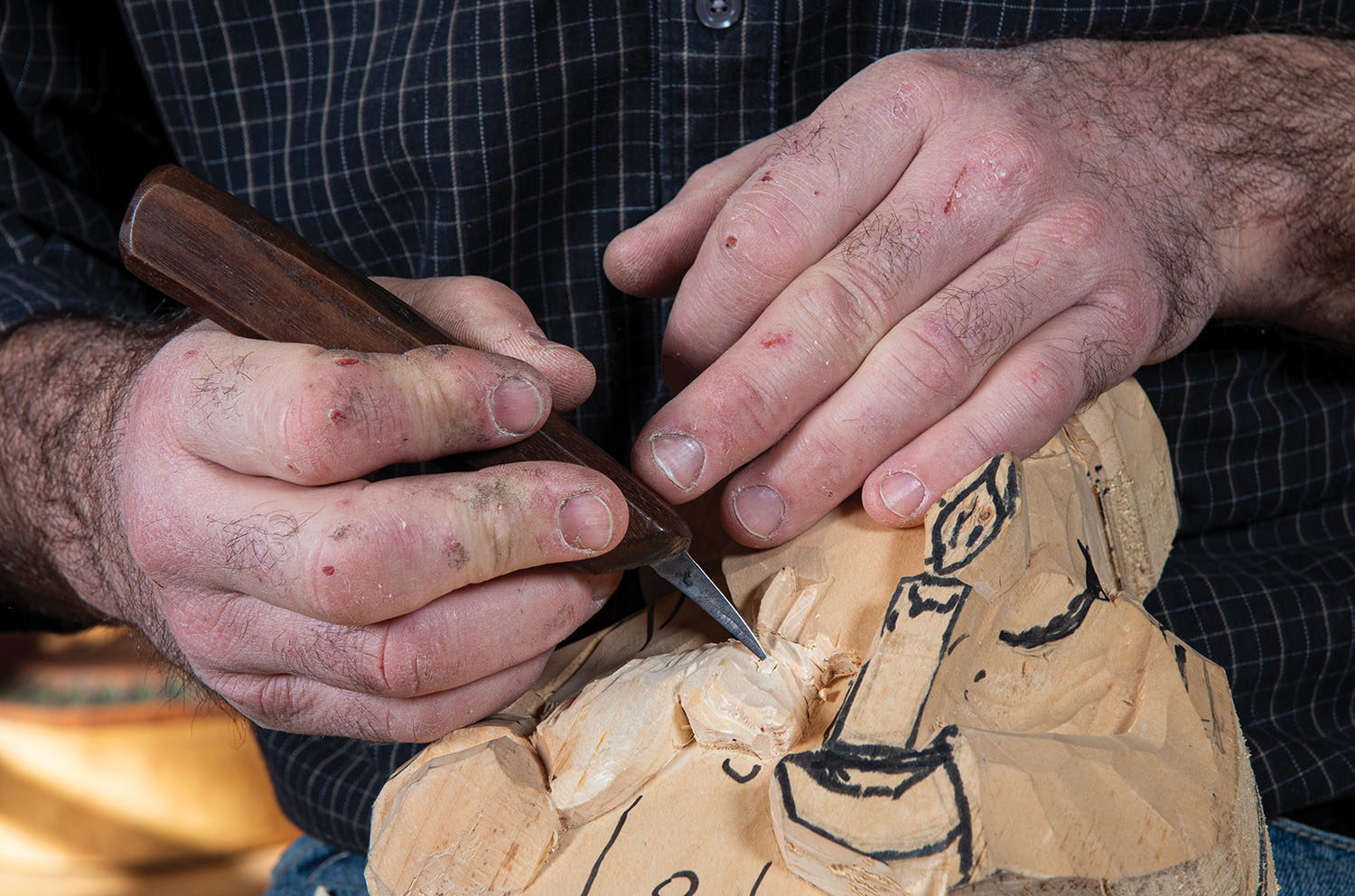 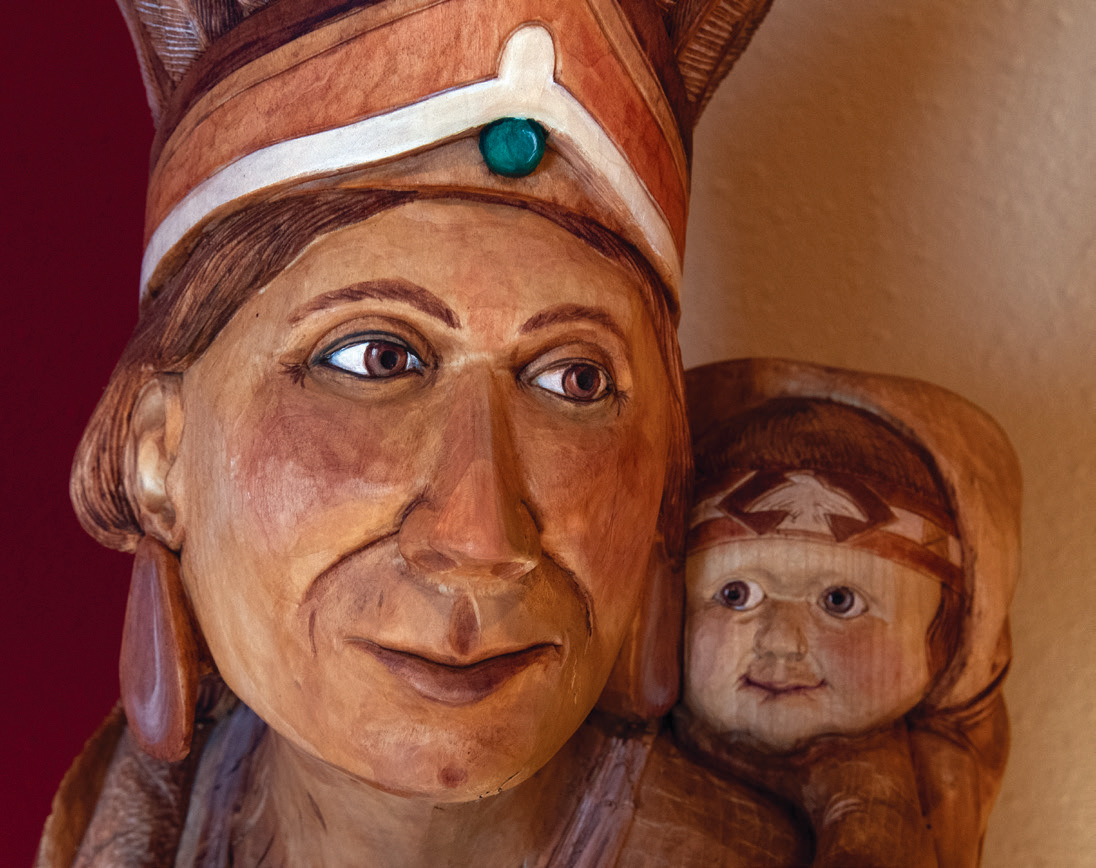 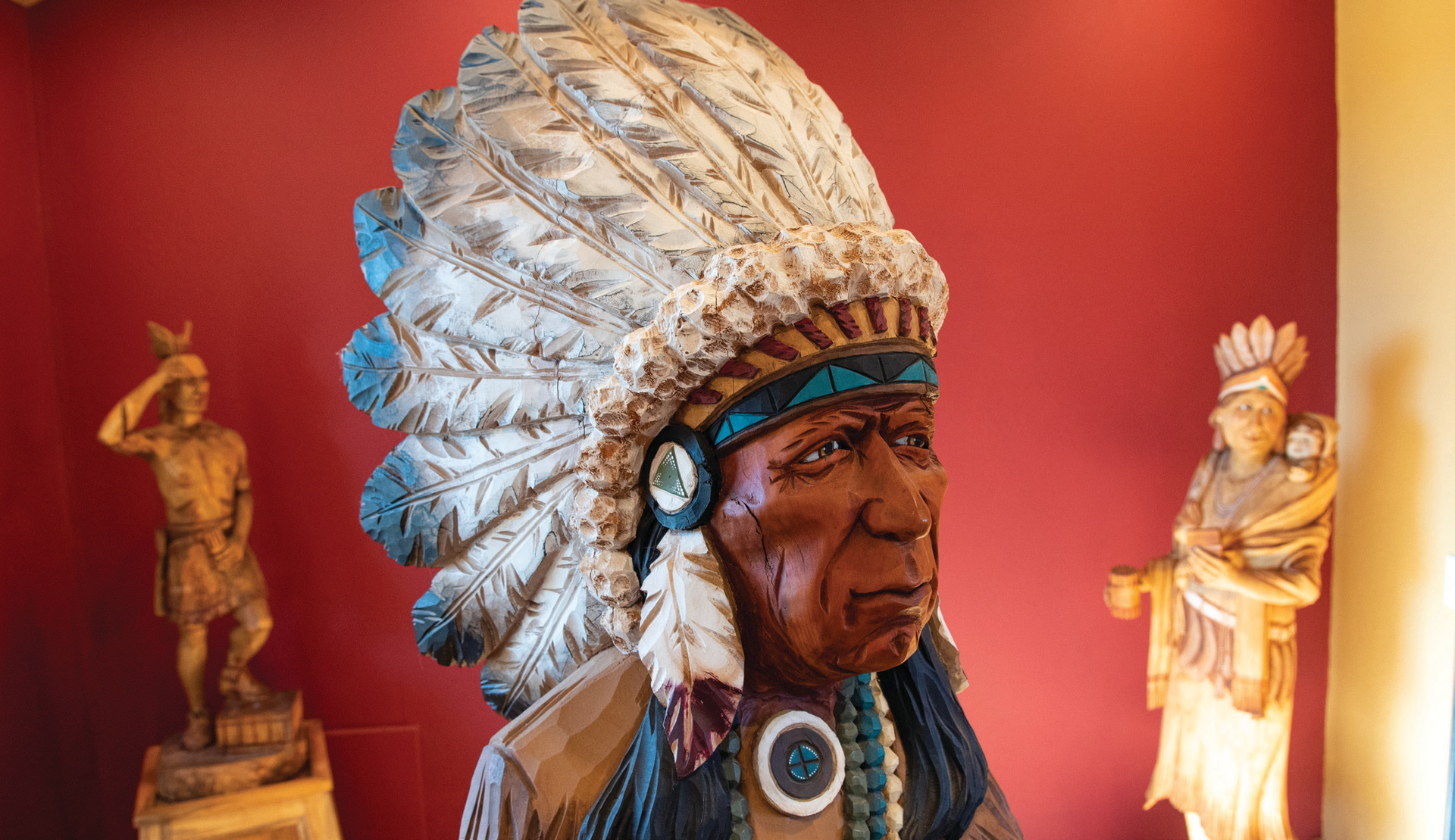 For his western art, which includes cowboys and American Indians, the carver strives for historical accuracy. On some pieces the details are accurate down to the rifles carved into the man’s hands or the jewelry representing a particular tribe.

One piece features an American Indian woman who carries a chubby baby on her back, his smile magnetic. “This is my favorite,” Brent’s wife, Elizabeth, says of the piece. “I was impressed with how he captured the tenderness between the mother and child.”

A black crow may symbolize bad omens or in the case of a cowboy with a loaded pistol behind his back, old debts that must be settled. Brent does his best to carve all of the details from a single piece of wood. Only rarely will he add something to the finished work.

“I almost 100 percent never do two pieces of the same thing,” Brent adds. “The first one would be fun. The second would be arduous. So I don’t do it.”

He does commissions but considers them more difficult than pieces he dreams up on his own.

Brent starts with a chunk of basswood, butternut or walnut and marks reference points that show where the key features will be. Roughing out the shape goes quickly, with the carver switching from a small knife to a chisel as needed. When he moves to the detail phase though the work slows to a crawl. Working a 6-to 7-hour day allows him to complete a large work in about a month.

He’s one of the fortunate few woodcarvers who have earned the opportunity to focus on their art full time. He knew he had arrived when one of his sculptures sold for $10,000. Before he could deliver it, his 4-year-old son took a hammer and a nail punch and decorated the carving. Fortunately, its new owner was sympathetic.

His record sale to date is $22,000, though many of his smaller pieces sell for $100 to $500. His work has sold all over the United States and even abroad to collectors in Japan and Sweden.

Brent began work on a farm gallery when most of the shows he usually attends were cancelled. He’s confident patrons will make a day trip out of visiting while stopping at area attractions and dining destinations along the way. “They can call or honk their horn,” he says. “It’s rather informal right now.”

You can reach Brent at brentsculptor99@protonmail.com or 417-298-9084. Texting works best. His gallery is located at 3523 Highway O south of Humansville.