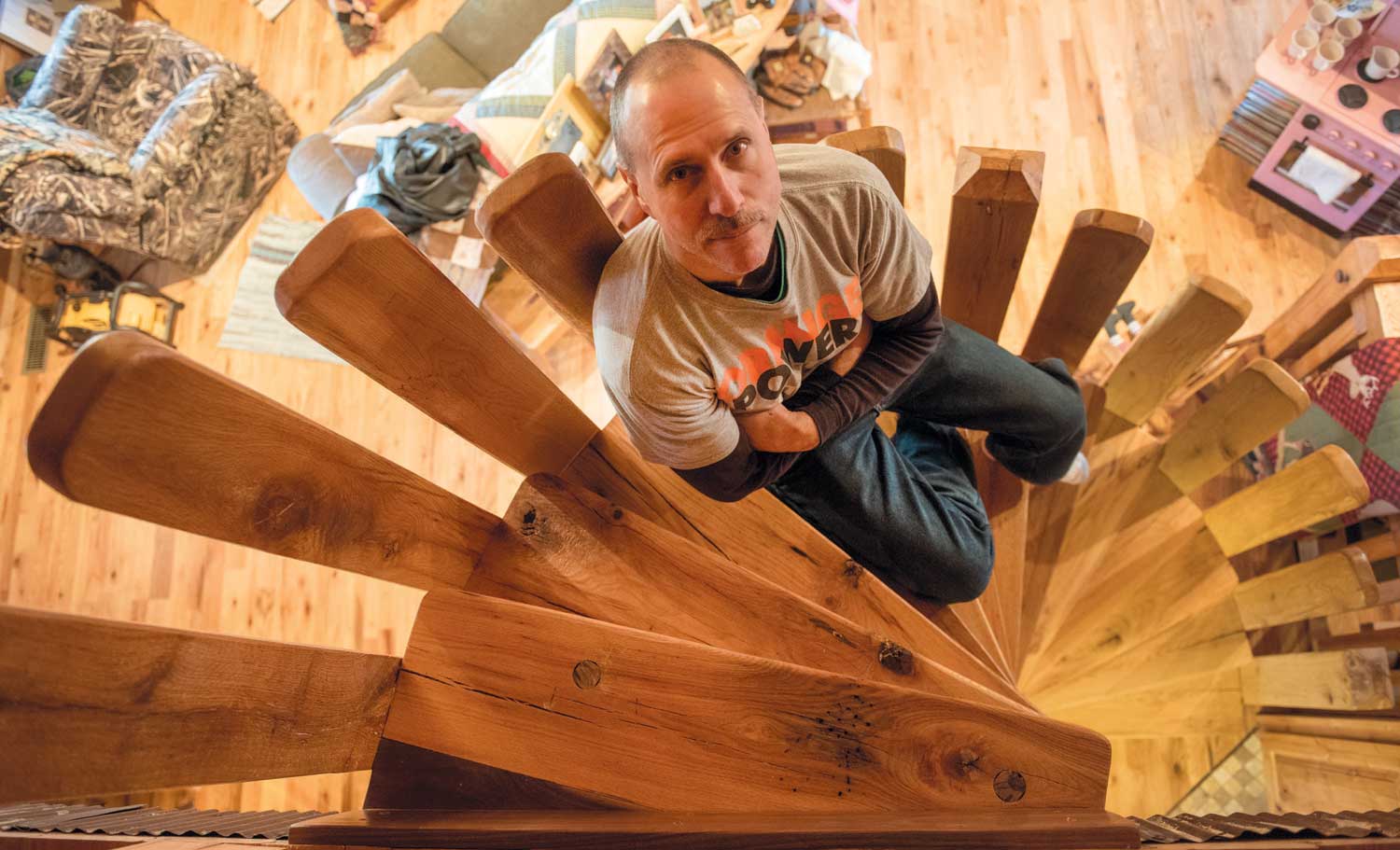 A Timber Frame of Mind

When you first see the figure coming up from the woods you might think it looks a bit like Abraham Lincoln may have back in his wood-chopping days — tall and lanky with an axe tossed up on one shoulder.

“It’s a cold one,” says the stocking-capped woodsman. “Stacy Brockman,” he says, hand outstretched in greeting, his breath hanging in the crisp winter air like a halo.

To the untrained eye, the home where Stacy lives with his wife, Kimberly, and their two children, Isaac and Isabella, seems like a beautiful, yet simple structure.

From the long covered porch, he opens the door to his family’s charming, rustic home.

Stacy looks up at the vaulted ceiling and exposed beams above the living room and smiles. “I cut the logs for these walls the winter of ’90 and ’91, then started building,” he says, noting he moved into the 1,300-square-foot home in rural Randolph County three years later.

What makes the Brockman’s home different than most of today’s conventional log-looking structures are the massive oak timbers he chose and how they’re joined with a centuries-old method called timber framing, a post-and-beam style of construction done without the use of nails.

Stacy, a 17-year veteran firefighter with the Moberly Fire Department, says it was a chance meeting in 1990 that got him into the timber frame of mind.

“I was driving down a road coyote hunting one snowy morning when I looked over and saw a little bearded man running an old sawmill,” says the Macon Electric Cooperative member. “I stopped to visit with him and he’s been my mentor ever since.”

That man was Allen Judy, whose business, Heirloom Handcrafted Homes, made custom-designed timber-frame buildings for those wanting something different than most ordinary homes.

After noting Stacy’s keen interest in woodwork, Allen asked if he had a job. When the 27-year-old said he didn’t, Allen said, “Well you can start Monday.”

Stacy said most of the initial work was cutting logs and sawing them into timbers, then smoothing the saw marks with a 1912 one-sided planer. “We’d run the log through, flip it over, run it through, flip it over again,” recalls Stacy. “It was a lot of work, but worth it. We’d saw, plane then starts a house. It killed your back no matter how young you were.”

Soon Allen found a source in Ohio that planed all the sides of his logs in one shot.

“That’s when the real fun began because we could just build timber-frame houses,” Stacy says, quickly adding, “And have a lot less backaches.”

Most traditional homes use “stick” frame construction, joining two-by-fours together with nails. Timber framing uses wooden beams with interlocking cuts called mortise-and-tenon joints — in other words, held together without any metal hardware. Early American colonists brought the method to the New World with them, and the technique can still be seen today in many historic structures.

The method amazed Stacy in 1990 and still does today. “I knew once Allen showed me how to timber frame, I was hooked,” says Stacy. “It’s the only way I’d build anything. It’s workmanship that will be here hundreds of years from now.”

The 51-year-old says he is glad he stopped to visit with Allen on that coyote hunt nearly 30 years ago because his mentor has recently decided to retire from the timber-framing business. While Stacy also plans to retire one day as a firefighter, the knowledge he’s gleaned as Allen’s protege is worth more than gold to him.

“You can study books, but you can’t beat the learning from an expert in the field,” says Stacy.

Stacy recalls a man once asking Allen why they choose to build things with this method. Stacy says he and Allen looked at the man and Allen replied, “This is how they built things before nails existed! It’s the oldest form of construction there is and that’s why we do it this way.”

“I’m just an old soul and that’s why really I enjoy this OldWorld-way of building,” Stacy says. “I like the way things used to be done. People living off the land, canning food, trapping, and hunting. Heck, I didn’t get a cell phone until I was 43 years old, and now, look at me.”

He holds up his prized old flip phone and smiles.

With his mentor retiring, Stacy is setting up his own sawmill, working on his home’s addition and building coffee and dining tables, headboards and fireplace mantels to sell — all with the timber-frame method he now has ingrained in his soul.

“If someone dozes trees down and I see potential, I usually stop and ask them if I can have it. Of course, I plane half of it for them to keep if they want, but many times, they just let me haul it off,” says the industrious man. “I like planing the wood down and seeing the story it has to tell me before I give it another purpose in life.”