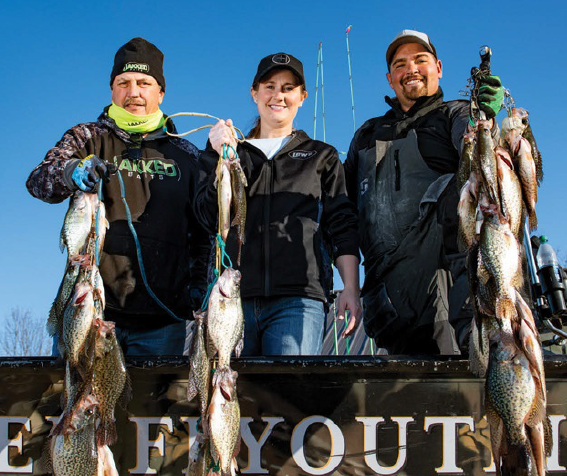 Kris Nelson’s life has been an interesting journey. His fervor for ﬁshing has charted a course from one side of the country to the other, but it’s always led home to southwest Missouri. Since 2010 his guide service, Tandem Fly Outﬁtters, has passed that passion on to numerous anglers at Table Rock Lake and Lake Taneycomo. Now based in Stockton, Kris and his wife, Amanda, are building the company’s reputation for happy clients by putting them on stringers full of ﬁsh.

“I know there’s nothing else I’ll ever do with my life because this is my purpose,” Kris says. “It’s a peaceful place to be.”
Winter ﬁshing, particularly for crappie, comes at a perfect time of year for folks stuck in limbo between deer and turkey seasons. Dense schools of hundreds and sometimes thousands of crappie collect in the original river channel, ﬁlling 15 to 20 feet of the lake’s water column. Other ﬁsh, which haven’t transitioned to winter patterns, remain in huge brush piles called crappie beds.

Identifying the right spot and the forage bait that these massive schools of crappie form underneath are the ﬁrst steps to ﬁlling the boat’s live well. The second is rigging the right tackle. In these conditions, Kris prefers a 16th-ounce jig and light, high-visibility line, which makes it easier to see when the ﬁsh is taking the bait. Finally, comes the presentation. If horizontal casts and slow retrieves don’t bring any bites, Kris positions his boat over the schools and drops several lengths of line down, slowing reeling the jig up through the swarm of ﬁsh. At this point, even a beginner can dip slab after slab — as they are affectionately known by anglers — from the chilly depths.

In nearly every way, the experience anglers have with Kris is merely the 2020 version of the days the Willard native spent ﬁshing with his grandfather. John Nelson grew up ﬁshing the White River before it was dammed to create the well-known lakes around Branson, so he knew the location of the original river channel and more importantly the towering old oaks that, once submerged, provided shelter for all of the ﬁsh.

“What he taught me at a really young age was not to look at a body of water but to think about what it was before the water was there,” Kris says. “That will help you understand where the ﬁsh are at.”

John’s old Lowrance Fish Lo-K-Tor has given way to more advanced equipment, but the premise is the same: know your ﬁsh, know your topography and know your tactics. It’s that same trifecta Kris applies today when taking clients out on Stockton and Pomme de Terre lakes.

“You have to be on the water every day,” Kris says of guiding. “Even if I’m off the water for a week, before I take somebody ﬁshing, I’m going out ﬁshing to know where we’re stacked for success.”

The long way back to the lake

“I didn’t have toys — I collected tackle,” Kris says with a smile. “It didn’t matter if it was a mud puddle, I’d try to ﬁsh it.”

That love for angling led him from his grandfather’s Glastron boat to Key West, Florida after high school. Getting a foot
in the door of the charter ﬁshing industry meant putting in time at sea on a commercial ﬁshing boat, where Kris often spent 21-hour days catching king mackerel by rod and reel. The hard work paid off. After obtaining his captain’s license, Kris ran a private sport ﬁshing yacht in the area for three years.

“I got to live the full-on Key West experience to the point where it wasn’t even fun  anymore,” Kris says. “Something clicked in me. I wanted to start a family, and I had to get back to where life was wholesome.”

And one day back in Missouri during the yacht’s off season, something else clicked for him. While attending a whitetail deer management class at a local church, Kris heard the testimony of a friend and his life was changed. A short time later, he realized his purpose: passing on his love of ﬁshing to others. In 2010, he attended the Sweet-water Travel Co.’s guide school in Livingston, Montana to learn the business. When he returned to Missouri, a few chance encounters showing people how to catch trout on Lake Taneycomo opened the ﬂoodgates. Soon, word-of-mouth referrals had Kris on the water every day, showing folks how to ﬂy ﬁsh.

“Everybody knew somebody else who was coming,” Kris remembers. “I started posting on Craigslist that I had cab-ins to rent out, and that’s how it all started.”

In 2015, Kris took a break from the trout down south to guide walleye trips on Stockton Lake. For two months, he led nonstop trips during the day and slept in a tent at night, ﬁnding time in between to make Facebook posts about each day’s success. When he found the former Stone Creek Lodge outside Stockton, Kris not only discovered better accommodations, but the next step for Tandem Fly Outﬁtters. The motel owner offered to sell, and in short order Kris and Amanda took on the task of converting it into a lodge, tackle shop and their home — all while raising their children and Kris continued to guide. Ten rooms complete with microwaves, refrigerators, coffee makers and sinks can accommodate up to 12 anglers. Along the way, they’ve tweaked the business to suit the clientele such as doing away with the bait and tackle shop in order to make way for expanding dining room seating at the lodge.

This year, Kris started offering package deals, which include three meals a day and lodging, at a lower per person rate than the average day or half-day trip. The more personalized experience, he’s found, gives anglers more time on the water, more opportunities to catch ﬁsh and has led to increased regular customers. With the tackle provided for them and everything from the boat ride to cleaning the day’s catch covered, all anglers have to do is show up with an open mind to enjoy the out-doors.

“I love to see other people catch ﬁsh and see them get excited about doing it,” Kris says. “We want to get away from the ‘meet-your-guide-at-the-ramp’ experience.”

Days On The Water

Rather than doggedly sticking to pursuing one species, the best way for newcomers to enjoy the experience is simply trusting the guide to know what’s biting and where.

The biggest testament to Kris and his guides’ local knowledge and skill may be the regular customers from the Great Lakes area — a place well-ensconced as the Mecca of walleye fishing — who travel to Stockton when their northern fishing holes freeze over in winter. Spring spawning season for walleye and white bass are popular times for trips, but it doesn’t take much more than a change of tackle and tactics to put clients on a limit of crappie.

“The crappie fishing is phenomenal here,” Kris says. “You can do it throughout the year. And after you go an hour or two without getting a walleye bite, people are ready to go to crappie fishing.”

Well known as one of the most popular panfish in Missouri’s waters, crappie are most typically fried in a manner similar to suckers or catfish. If an angler is in search of a new recipe, try Kris’ preferred method of hickory smoking the slabs with a dash of seasoning and a strip of bacon.

From deep-sea fishing the Atlantic to fly fishing Taneycomo, Kris has never regretted moving the business north. It’s fair to say any place you can wake up, fill your bow tag on a public land buck, catch a limit of crappie and have it all in the freezer by 9:30 a.m. qualifies as a “sporting paradise.” The public land around Stockton Lake alone affords outdoor lovers opportunities from bird watching and wild-life photography to turkey hunting to miles of hiking trails.

“There are just so many opportunities here,” Kris adds. “There aren’t very many places you can go where you have that amount of resources at your fingertips just staying at the local fishing lodge.”