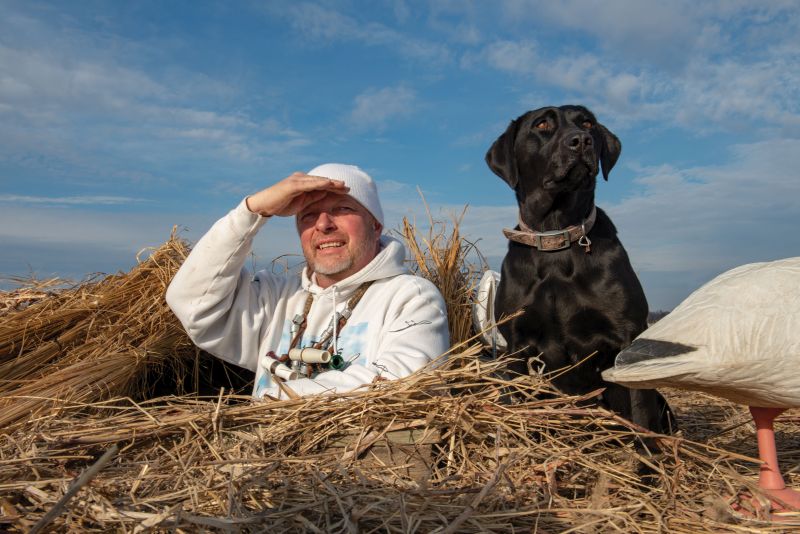 Dug in to the pit blind and camoufl aged in white to blend in with a spread of more than 1,000 decoys, snow goose hunter and enthusiast Arnold Compton and his faithful retriever Cami, watch the skies for signs of their spring quarry — snow, blue and Ross’s geese.

Waterfowlers head afi eld to save an ecosystem in peril

It’s not often that Midwesterners are asked to help save the Arctic tundra, let alone to do so from the cornfi elds and lakes of the Show-Me State. But years of habitat destruction have put an out-of-control goose population directly in the crosshairs of Missouri’s hunters.

The most recent estimates from the U.S. Fish and Wildlife Service put the mid-continent population of lesser snow geese at nearly 12 million adult birds. While the population has seen a general decline since a high of more than 16 million in the mid-2000s, they still pose a threat to their summer haven. Snow geese nest in great colonies along coastal marshlands and agricultural areas in northern Canada — an area that also serves as a breeding and migration staging ground for more than 200 other species of birds and other wildlife that call this region home and depend on it as a food source.

The danger this overabundance of snow geese poses to their own ecosystem is so extreme that in the 1990s, the U.S. Fish and Wildlife Service recommended loosening hunting regulations (as described in this story’s sidebar) on the snow geese and their blue color morph, the blue goose. In 1999, the Light Goose Conservation Order became federally mandated. Twenty years later and thousands of miles south in the American heartland, the fight is still raging in an unusual season for waterfowlers — spring.

“In our lifetime it’s unprecedented to hunt any type of waterfowl in the spring,” says snow goose hunter and enthusiast Arnold Compton. “It’s becoming popular among hunters because the spring season is much more predictable and there are no other hunting seasons to compete for your time outdoors during most of the Conservation Order.”

It’s fi tting that some of the best spring snow goose hunting to be had takes place in Missouri’s Golden Triangle — an area long cherished and well known as a mecca for waterfowlers. The heritage of Canada goose hunting in particular is forever immortalized in the town of Sumner by the statue of Maxie the Giant Goose and an annual Goose Festival, held there since 1955. The local heyday of hunting Canadas seems to have drifted into memory — waterfowlers and birders visiting the nearby Swan Lake National Wildlife Refuge are more likely to spot mallards and migrating fl ocks of federally protected trumpeter swans — but the snow goose is perfectly poised to bring an economic boost
back to area businesses. 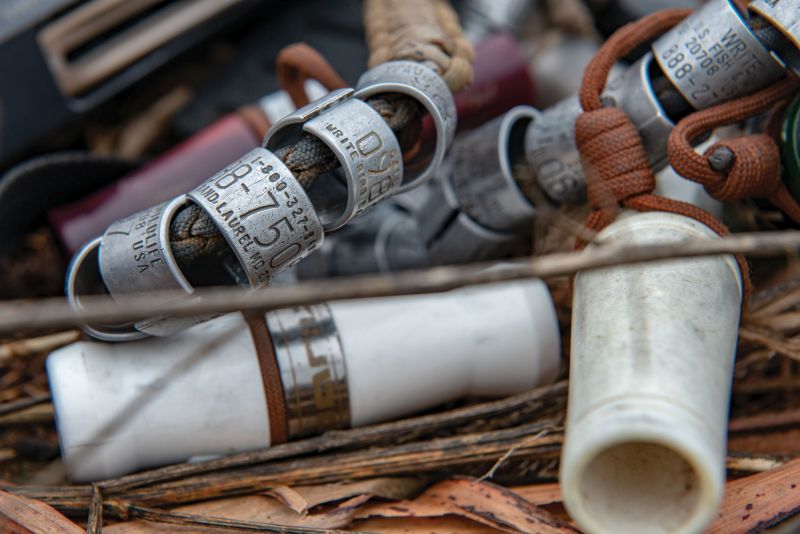 The hallmark of diehard waterfowlers — bird bands from previously successful hunts — encircle Arnold’s call lanyard. Used to track the movements of migratory birds, the band numbers are reported back to the U.S. Fish and Wildlife Service and sometimes are associated with reward money

Arnold has been there from the beginning. In that fi rst year, peeking out of a 1960s-era pit blind at a fi eld of 1,000 plastic bags with black “X”’s drawn on them and tied to popsicle sticks, it was a whole new world. The Associated Electric Cooperative employee and Macon Electric Cooperative member says he had never experienced anything quite like the deluge of white geese that poured into his decoy spread. It’s fair to assume that the geese, having never been hunted during their spring migration in Missouri, were probably just as surprised.

“Every day they would pour out of the sky and if you killed 20, that was a slow day,” Arnold recalls. “We were successful every time we went. I thought I’d found the holy grail of hunting and that nothing would ever change.”

Those perfect days where the birds just don’t seem to stop still happen but perhaps not as often. Arnold notes that by the third season flocks seemed to have educated themselves on the fi ner points of survival and the dangers of decoys. Even when the sun and wind are optimum, hunters can still pass a morning or afternoon in silent frustration as swarming strings of salt and pepper dots strike out for food, seemingly in every direction but toward the blind. Because the geese are hunted nine months out of the year across their migration path they may be somewhat clued in to their newfound infamy. The days when the fervent snow hunters spend all day afi eld, shoulders sore from shooting and face muscles sore from grinning — the days they can’t help but talk about without laughing and shaking their heads — happen most often in the spring. 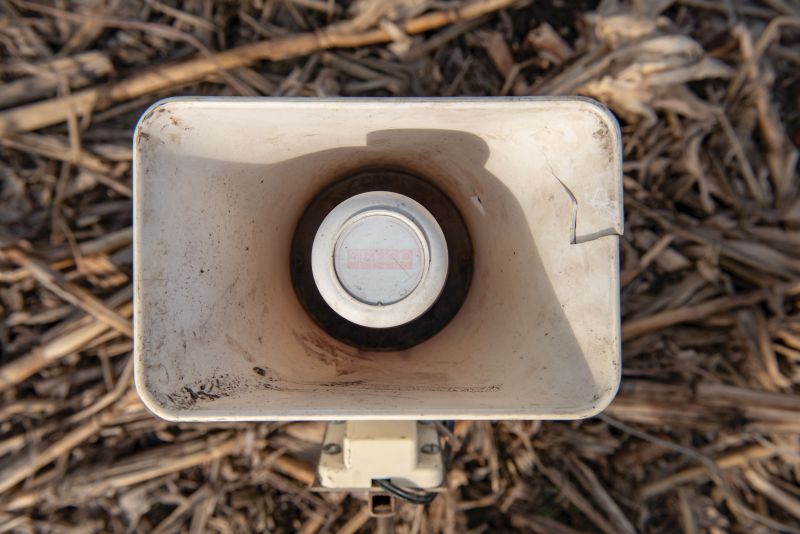 Prohibited for use during the fall waterfowl season, electronic call systems give snow goose hunters an edge in reducing overpopulation during the Light Goose Conservation Order.

“That’s what you dream of and that’s the way it is sometimes, but other times they are more wary, and that has a lot to do with lighting conditions,” Arnold says, adding sunny, windy days are the best for hunting snow geese. “But the juveniles still come in with reckless abandonment, feet out, and it’s just magic.”

In Missouri, it’s not uncommon to see fl ocks of snow geese numbering in the thousands covering lakes and teeming the skies during fall and spring. Even the nonhunter is likely to have heard the bird’s “yap” — distinct from and much higher in pitch than the honk of a Canada goose — while out raking leaves in the yard, although the birds fl y at such high altitudes that they are heard more often than seen due to cloud cover. Flocks can be even more numerous and concentrated in the spring, normally staging just below any weather-related lines of ice and snow, as they make the return trip to their Arctic breeding grounds.

Also caught in the fray in the U.S. is the Ross’s goose, which are nearly identical to snow geese but smaller. They are otherwise unrelated — but when it comes to the spring season they are, as Arnold puts it, “guilty by association,” and hunters are allowed to shoot them. Other waterfowl including Canada, Brant and greater white-fronted geese — also known as specklebellies or specks — are off limits in the spring.

Weather is a strong factor in how well snow geese respond to decoys, and it takes an enormous fi eld of white in order to attract billows of birds into range. The consensus among avid hunters is that a lot of decoys are needed to effectively attract large fl ocks of snow geese. Spreads of 1,000 to 2,000 decoys are quite common, including full-body standing decoys, rotating fl yer decoys and “SilloSocks” — a cross between a windsock and a plastic head that automatically turns with the wind direction. Because the birds feed into the wind and can only land against it, setting them correctly before getting in position is key to enticing them down for a closer look. Arnold says the cost and effort involved in purchasing and setting thousands of decoys shouldn’t discourage newcomers, and like any hobby the would-be goose hunter must start somewhere. For those who don’t want to purchase a few dozen or even 100 decoys, snow goose hunting is a perfect sport for guides to offer their services and expertise at a time of year when no other waterfowl are legal to hunt.

“The spring season has greatly increased opportunities for guides and outfi tters,” Arnold says, adding hunts range in price but can accommodate every budget. “It’s been such a huge boost to the outdoor economy I don’t think we could do away with it now — there would be an uproar.”

The cost to hunt light geese — the collective term for snows, blues and Ross’s geese — in February, March and April is as cheap as it gets. Indeed, a spring snow goose hunter will probably have more money tied up in their shells than the legal paperwork needed to dispatch their intended targets. Unlike during the fall season, Missourians don’t need a hunting license, a migratory waterfowl permit or even the federal duck stamp to hunt during the conservation order. The $5 Conservation Order Permit, which costs $40 for nonresidents, is the only authorization required. Relaxed restrictions on bag limits, shooting hours, the number of shells and even the use of electronic calls add up to give the gunner every advantage in helping to reduce snow geese numbers.

With no daily limit and the potential to bag piles of birds, spring hunting also can provide for a lot of good eating. If you’ve ever heard the bird referred to as “sky carp”, don’t let the bad rap fool you. Snows are as tasty as any game found on the wing in Missouri. Arnold’s preferred recipe for juvenile birds is to cut the breast meat into medallions, dust them lightly with fl our and sauté in oil with jalapenos. Meat from older geese can be ground for sausage or dried jerky. Taxidermy enthusiasts fi nd something to love as well, adding the unique birds to their collections. On a good day, waiting for those telltale “yaps” at frozen dawn trying to unfreeze trigger fi ngers with frosty breath in a layout blind, the sport offers plenty of action for gunners. The retrievers feel the excitement, too, ears pricking up and eyes darting to fi nd where the noise is coming from.

“It’s a great conservation story and it’s enjoyable,” Arnold says. “There’s a whole ecosystem at stake, and it’s neat that hunters have been asked to help manage the situation.” 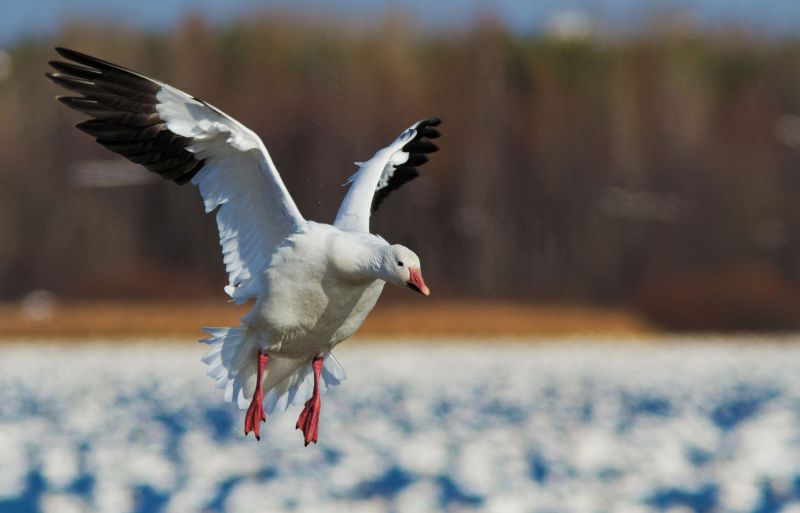 Wings bowed and feet out, the distinctive white-colored bird banks for a water landing among thousands of other snow geese. Estimated to number nearly 12 million across central North America, the birds are endangering key Arctic nesting grounds in northern Canada.

The spring Light Goose Conservation Order differs from the average fall waterfowl season in many respects when it comes to hunting regulations. The differences outlined here are designed to give hunters an edge when it comes to reducing light geese numbers during the spring migration:

For more information on how to experience the spring conservation order or get started snow goose hunting in Missouri, contact Arnold Compton at 660-676-2306.