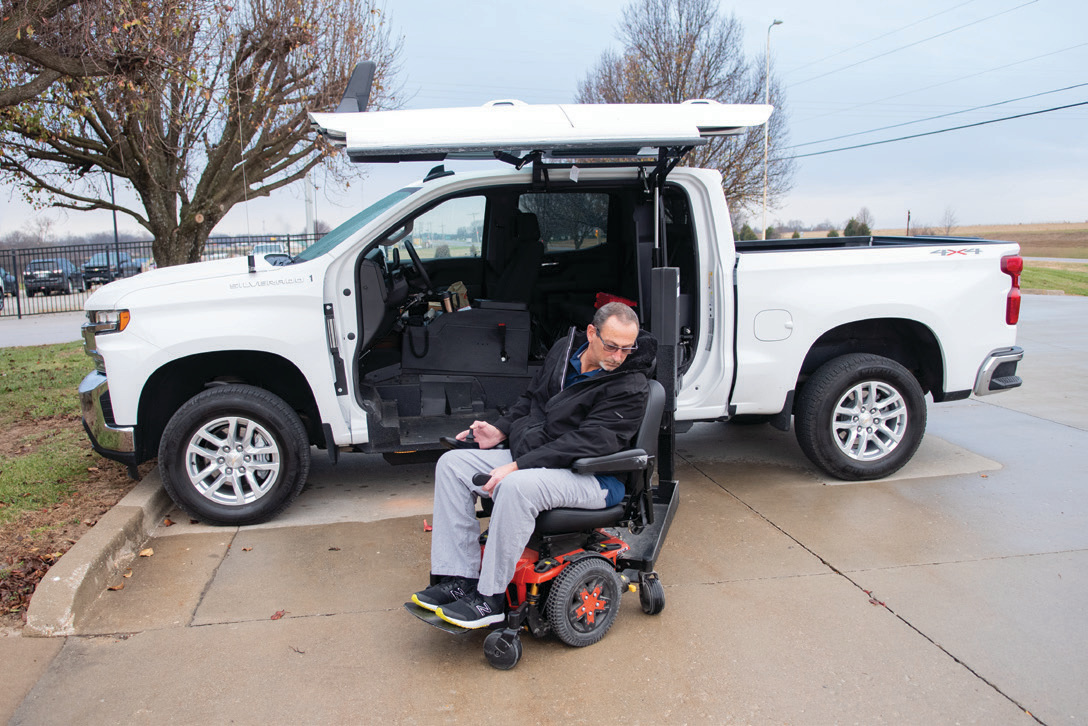 It was supposed to be a simple operation, outpatient surgery to correct a herniated disc. “I put up with it as long as I could,” John Randall relates of the back pain that was making it hard for him to do his job as a lineman for Central Missouri Electric Cooperative. “It was something I couldn’t put off any longer. It was making me physically sick.”

John walked into the clinic, but the next day learned he would not be walking out. During the operation his spinal cord was severed leaving him paralyzed from the waist down.

That was tough news to a man used to working hard his entire life. John, a lineman for the Sedalia-based cooperative, was just weeks away from completing his apprenticeship and advancing to journeyman lineman. Devastated, he struggled to accept the news that he could no longer climb poles and do many of the tasks he had taken for granted.

John’s story might have ended on that tragic day. But along with the bad news, he learned an important fact about electric cooperatives: They are family. The Central Missouri Electric Cooperative family not only rallied around him, they also helped him stay on the job.

“It was very humbling,” John says of the response from his cooperative co-workers. He and his wife, Angela, have a special-needs child. Caring for him meant Angela couldn’t stay with John during his surgery. “My wife had to go home,” John says. “Tony Tilman, he was the one I was on call with all of the time. Tony told Angela to just go home and don’t worry about it. He said, ‘I ain’t ever going to leave you.’ I’ll never forget that as long as I live. That’s friendship.”

Tony set the tone for the rest of Central Missouri Electric’s extended family. He was there for John when he got the bad news. When he headed back to the office, Line Superintendent Gary Coulter was already on the way to John’s side, followed by a stream of co-op employees who assured John wouldn’t face the tragedy alone.

“I can guarantee I wasn’t alone except when I was sleeping,” John relates. “Someone was always there. Even the ladies from the front office. All of them came one night. We went to a common room and talked and joked.”

The co-op’s linemen teamed up to build a ramp that allows John to get into his house in a wheelchair. During John’s long rehab they took turns helping him do physical therapy. “It made it a lot easier knowing they were there for me,” John says. 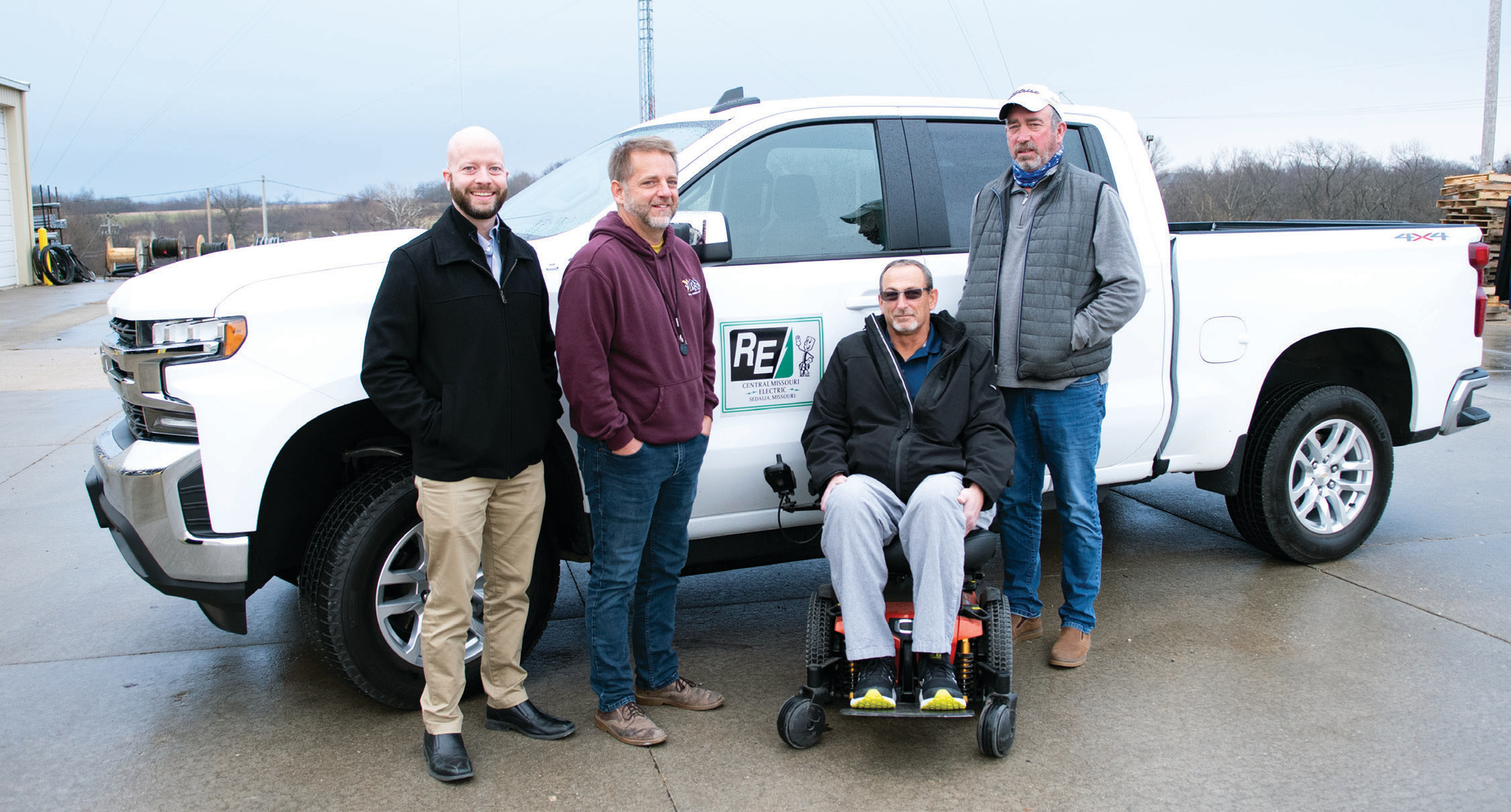 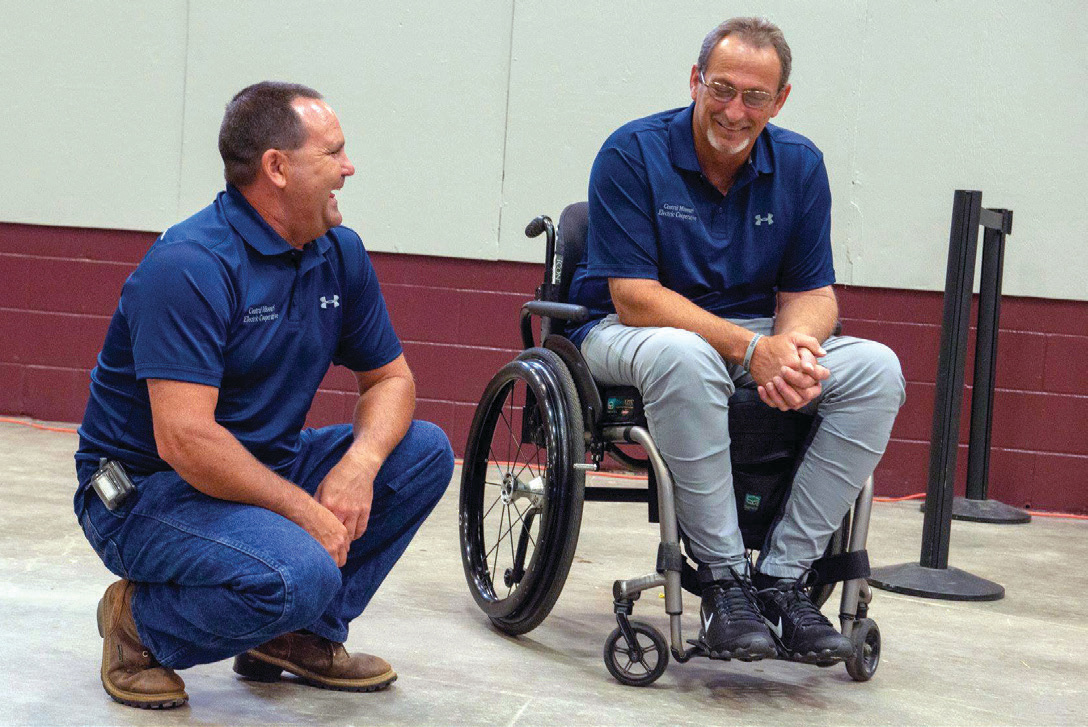 Back home, John struggled with the challenge of caring for his son, Zeb. The two loved to take rides together on a Gator all-terrain vehicle. One night, Zeb asked his dad if they would ever be able to do that again. It depressed John because he had no answer for the boy.

The next day John was wheeling into the office when he met Manager Darren Eckhoff, who instantly realized John had something bothering him. John told him about Zeb, and Darren offered to take a look at the machine. He brought a trailer to John’s home and hauled the Gator away.

On Father’s Day he was back, having modified the ATV with hand controls. “He said, ‘Get on and see if it will work for you,’” John says. “That evening I asked Zeb if he wanted to go for a Gator ride. Me and him hopped on and we were gone for probably 3 hours. That was one Father’s Day I will never forget.”

John would soon get a chance to return the favor when Darren told the staff he was suffering from cancer. As the disease progressed, Darren too was confined to a wheelchair. Along with Assistant Manager Rance Walters, John used his mobility van to transport Darren to Columbia for treatment. “We would bebop to Columbia and get him, make him laugh, bring him home,” John says. “It was a sad time. But Darren was a true friend of mine.”

Darren would pass away in October 2019 after witnessing the same outpouring of support from the co-op family John saw. Not long after Darren’s death the cooperative suffered yet another tragedy when lineman Mike Adams, a 30-year cooperative employee, lost his battle with cancer. He too would feel the love from this extended family.

“We’ve had our highs and lows,” says Rance, who grew up with the cooperative when his dad, Ed, was its manager. “We stick together and say a lot of prayers.”

With new manager Brian Jacobi on board, John wondered whether his role at the cooperative would continue. He needn’t have worried.

John’s experience as a lineman and personality made him the perfect fit for a new role as manager of the cooperative’s right-of-way program. Brian endorsed the idea and John was told to look into a new truck that would allow him to leave the office to oversee the cooperative’s right-of-way contractor. His new ride has doors that open gull-wing style and a platform lift that puts him in the driver’s seat.

The new role fills an important need to improve reliability by keeping trees trimmed well away from lines.

“I was told early on that this was an issue we wanted to do better in,” says Brian. “Rance came and told me that he and Darren had talked about this with John. He told me John owns what he does. And we were going to need that. Of course, there is another piece that is very important with dealing with right of way. Because you have a lot of landowners, some who understand and some who need more background to understand why you need to cut the trees. So, the other big thing is charisma. And that is definitely something John has.”

The co-op’s employees joke that John has been sent to pursue easements or other things from landowners. And he’s come back with both the easement signed and an invitation to come hunt with the landowner.

Central Missouri’s co-op family extends to its members as well. Whenever there is a community need you can find the cooperative well represented. This includes welcoming home the Central Missouri Honor Flight. Before his tragedy, John helped fly a giant American flag from a bucket truck along the route the veterans take through Sedalia.

Gary tells of a member who needed a meter base but could not afford it. One of the linemen covered the charges so the member could receive power. “We’ve got other stories like that around here where the employees have taken care of the members when they see a need,” Gary says. “I think a lot of it starts with the board. It starts there and then we’ve had managers who care about their community and employees. And it just spreads from there.”

As for John, he is grateful for the opportunity to continue working on behalf of the cooperative’s members and for the cooperative family who helped him through a difficult time. “There’s nothing like the love and friendship and family that a co-op has for each other,” he says. “It was a tough time that I went through, and everyone said I don’t know how you did it. I know how I did it. My family. My friends. My co-op family.”