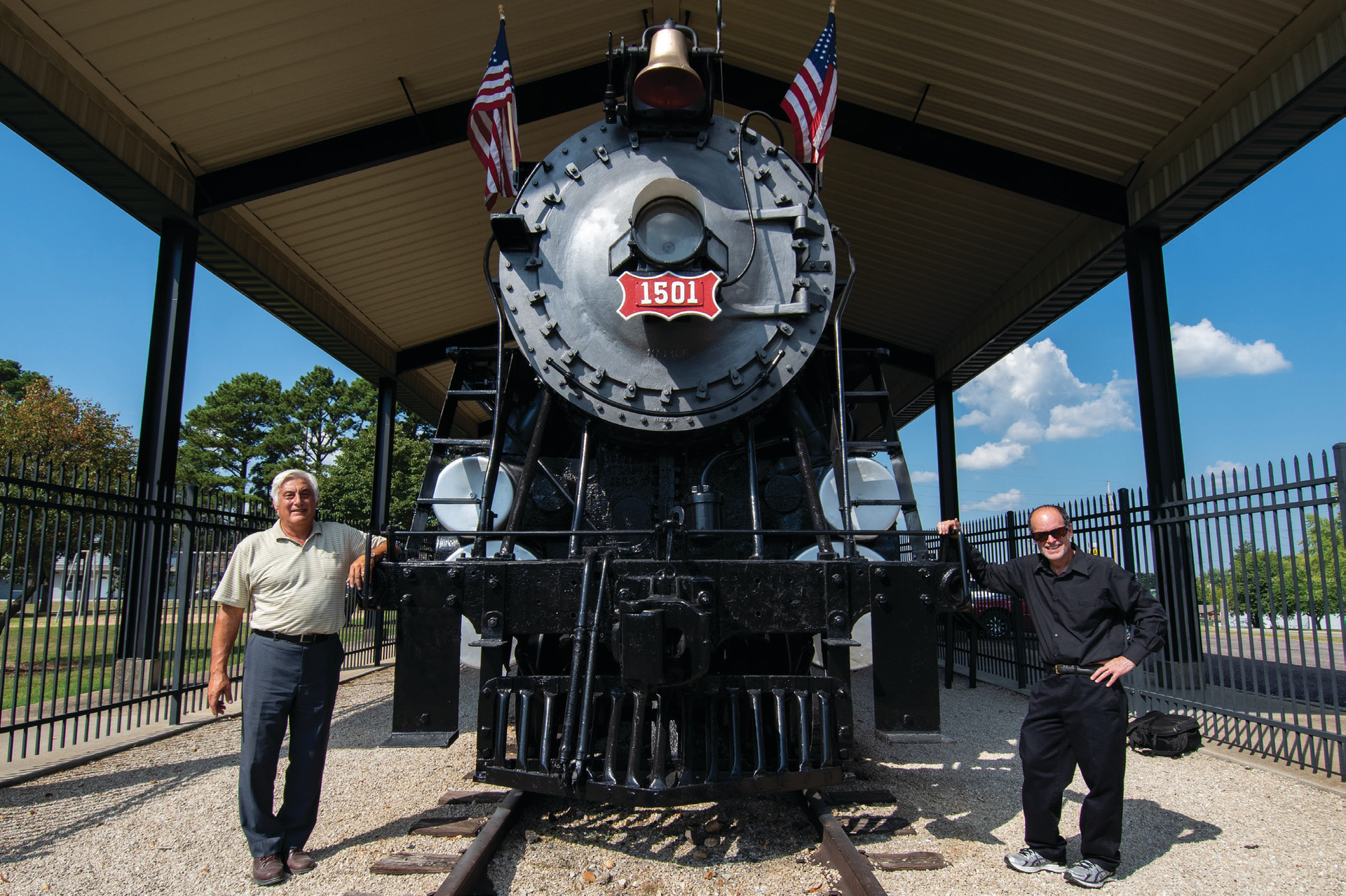 Nick Barrack had a problem. The president of CSE Construction and USA Tours thought he had diversified his company enough to weather any storm. With a commercial construction division and a tour and charter bus company, the Rolla-based enterprise had prospered for 20 years.

“On the construction side, the one job we had didn’t want any strangers in the building,” Nick says. “The tour business just totally died. In one week we went from nine buses running five to six days a week to zero. I’ve never seen anything like that.”

Worse, he was forced to refund more than $200,000 on deposit for bus charters. “Some of the deposits we had were six months old,” he laments. “So it was already in the system and spent. Almost everyone wanted their money refunded, which we were able to do.”

Still Nick was determined to keep his team of 26 employees working. He applied for a Payroll Protection Program loan and was relieved when it was approved. Now he had a new dilemma. The loan would be forgiven provided employees were kept on the payroll. But Nick had nothing for them to do. 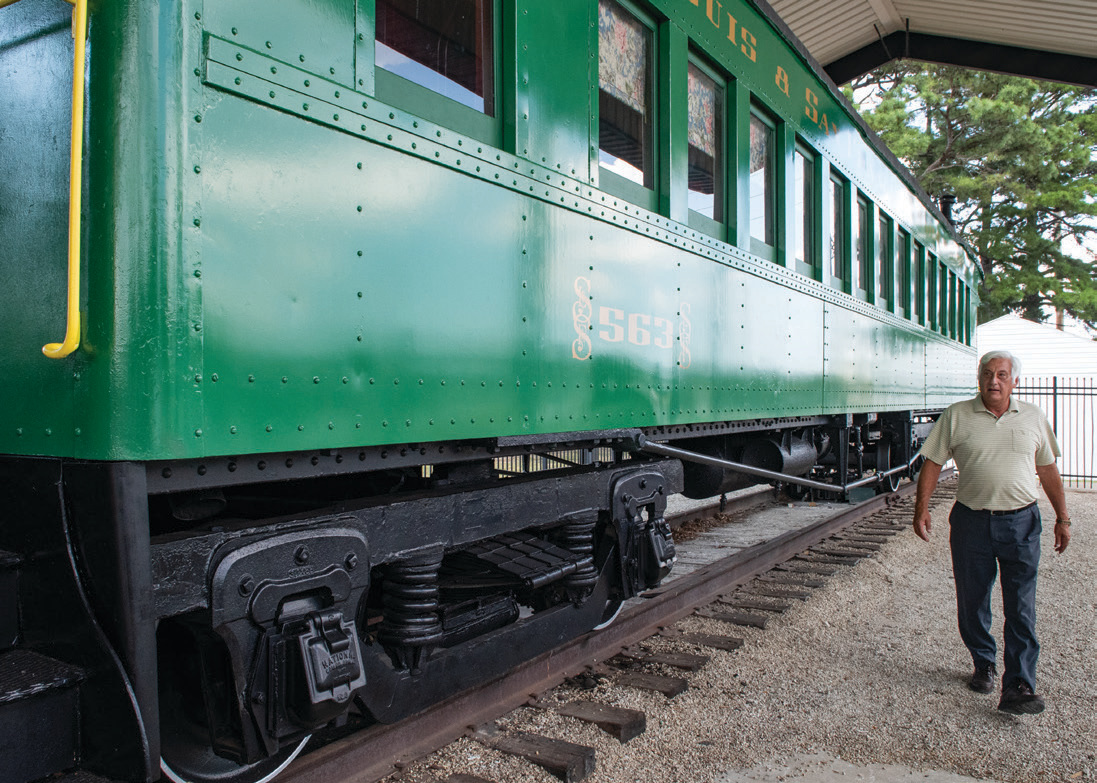 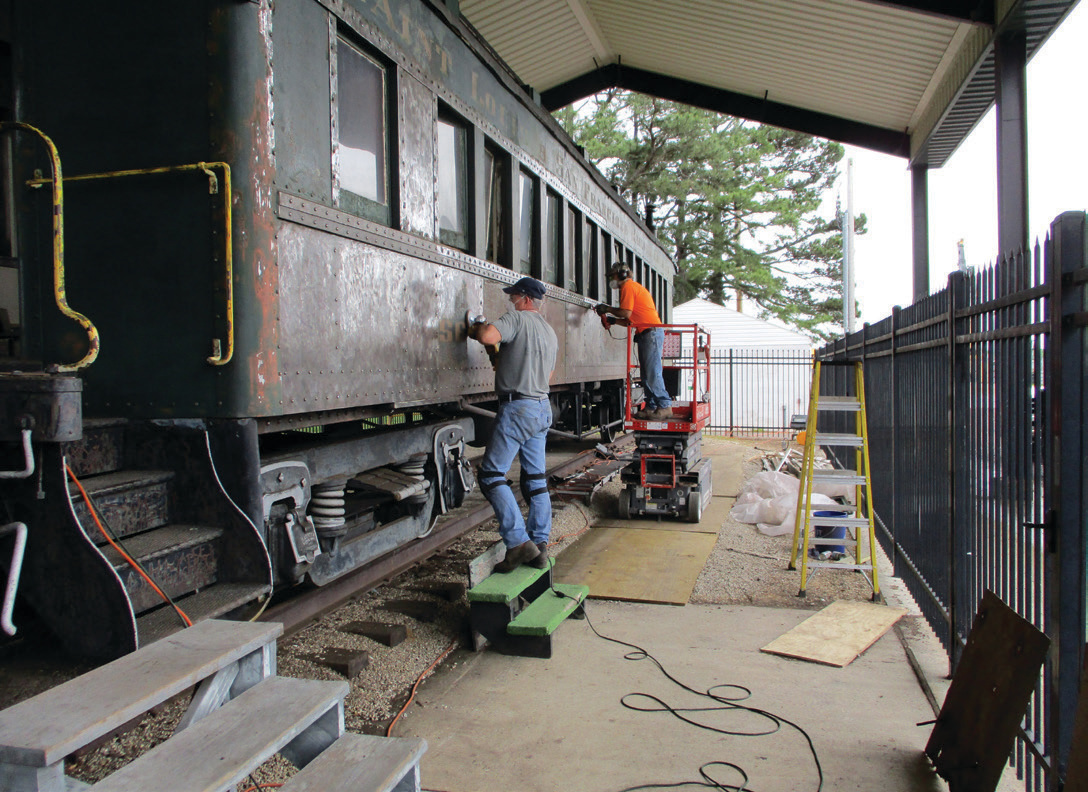 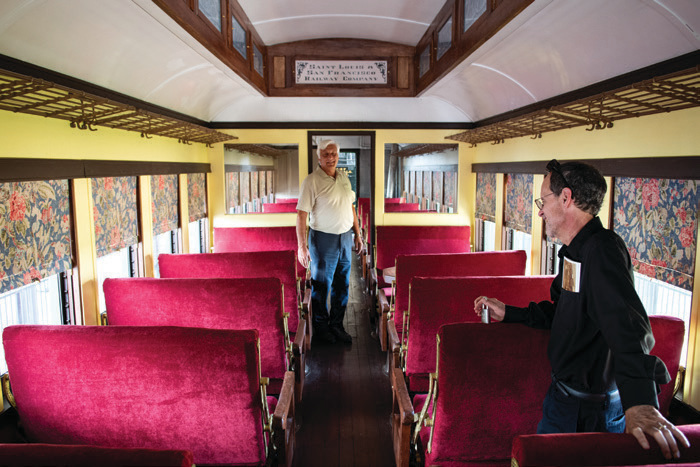 That’s when he approached Rolla’s Parks Director Floyd Jernigan to see if he needed help. Nick suggested restoring the old steam engine and passenger car on display in Rolla’s Shuman Park, and Floyd agreed it was a worthy project and a good match for the company’s skills.

“Nick reached out to us back when the virus first hit,” Floyd says. “First off, we talked about restoring the inside of the passenger car. But there’s nothing too large for Nick and his folks. So, it became a complete redo of everything.”

Engine No. 1501 was a workhorse for the Frisco Railroad from the time the railroad took delivery in 1923 until its retirement in 1951. Built to haul freight and passengers through the rugged Ozarks, the locomotive passed through Rolla many times in its long career.

With steam engines being replaced by diesels all along the line, citizens of the town lobbied Frisco for a retired locomotive. Their persistence paid off. In 1955 Frisco handed over the title to the engine, its oil tender and a rare passenger car built in 1883. They were cleaned, painted and moved to Rolla. They were spotted next to the main-line where a water tank and depot once stood.

Over the years, vandalism, scavenging for parts to keep another engine running and the elements wreaked havoc with the train. Rust covered the engine’s massive flanks, while the passenger car fared even worse. Its roof had leaked, rotting the wood framework and the once plush red velvet seats.

“I knew what the outside looked like because I had seen it,” Nick says of the project. “But I hadn’t seen the inside of the passenger car. It was a mess. The ceiling was coming down. The walls were caving in. The seats were all rotted. The floor — well, one guy fell through it.”

Undaunted, Nick put his team to work with the same “can-do” spirit that brought the train to Rolla in the first place. Some of the workers began sanding through seven layers of paint to take the tender and passenger car down to bare metal.

“It took three guys three weeks with grinders,” Nick says. “We went through hundreds of dollars worth of grinding wheels. The grinding was tough and monotonous for the guys. We had a big celebration when that was done.”

Meanwhile, another group tackled the old passenger car. They found that the ceiling had once caught fire from the kerosene lanterns that provided light. As they removed metal covering the original wood, they discovered it once had a series of clerestory windows with intricate etched glass. Only one window remained, but from this they made a pattern that was used to replace all 30 of the windows.

The entire inside was gutted and the pieces moved to the tour bus garage where they were stripped and repainted. There turned out to be more than 600 parts to the passenger car interior, including its unique seats. Because the train would travel both directions, the seats were designed to flip so passengers could face the front of the train.

Along the way much discussion took place with historians and rail fans who helped with clues about the proper colors for the restoration. One point made by some of the purists was that the original train ran with black wheels. These had been painted silver when it was put on display in order to make the huge wheels stand out better in photos.

“Some were saying now is the time to go back to the way it was,” Nick says. “‘Don’t put the whitewalls on the wheels.’ Well, we kind of kicked that around. It’s really neat to take a picture of your kid next to those wheels. If it was all black you couldn’t see it in the picture. So, we went ahead and painted it silver.”

Not content to just restore the train, Nick’s crew also was determined to make the whistle work. Over the years many parts had been removed, so replacements had to be found or mounting holes welded shut. After much effort the steam chamber was filled with air and the unmistakable sound of a steam whistle resounded in Rolla again.

An open house was held in August so that railfans could see the effort made by Nick and his crew. Right after the ribbon was cut reopening the display a BNSF train went by on the nearby tracks.

“The train engineers had been watching us in the two months we were working on the project,” Nick says. “They knew what was going on. When he saw there was an event going on he gave us a nice salute on his whistle. It just happened there was someone in the cab of the steam engine and he whistled back. It was like it came back to life.”

One boy who attended the event told Nick, “Mister, this is the best day of my whole life.” An older man said he had wanted to blow the whistle for 50 years and finally got the chance.

“It was a once-in-a-lifetime opportunity for all of our people to work on that,” Nick says. “We may never get another chance to work on something like this. But you never know. We might get a call from some other city. ‘We saw what you did and we will pay you to do that here.’”

Rolla’s parks director says the CO-VID-19 situation had a silver lining for Rolla. “You don’t want bad things to happen but in this case it really benefited us,” Floyd says. “We can’t say enough to thank all the volunteers who contributed. No detail was too big and no detail was too small. There’s a volunteer spirit in this town that manifests itself in projects like this.”

Perhaps the hard work paid off in other ways for Nick and his employees. His construction crew is again working, USA Tours hosted four post-COVID-19 bus tours in August, taking guests to several national parks, and charter business from Ft. Leonard Wood, Army Reserve and National Guard units is again putting its bus drivers behind the wheel. 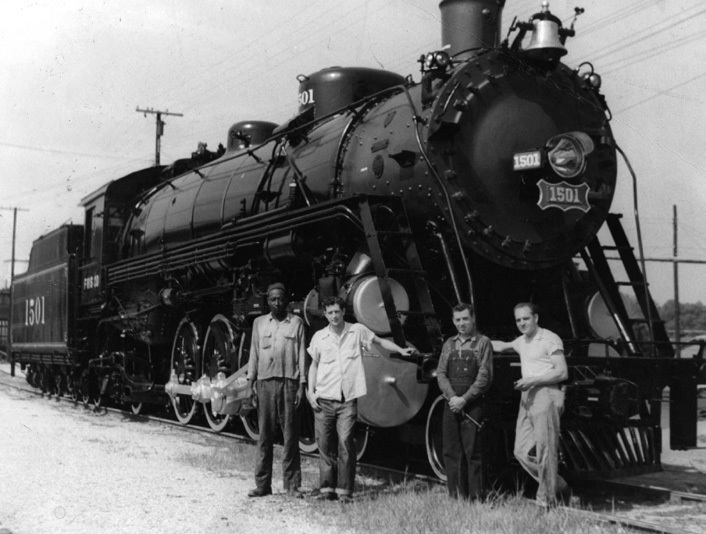 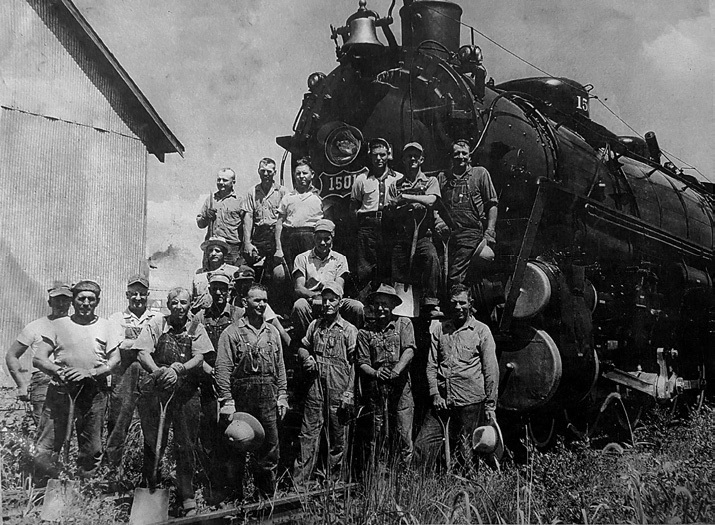 Rolla’s Frisco No. 1501 has a huge following among railfans. Local brewery Public House Brewing Co. even named one of its beers, Frisco 1501 Historic Lager, in honor of it. The locomotive once puffed its way along the Frisco Railroad passing through many Missouri towns along the way. There are still Frisco employees around who drove the train, and they pay their respects to the veteran locomotive on display in Rolla’s Shuman Park.

The engine was one of 30 similar models built for the Frisco by Baldwin Locomotive Works. They were designed to handle the worst inclines on the Frisco lines and were dubbed “Mountain” engines. Equipped with four pilot wheels, eight massive drivers and two trailing wheels, the engines were dual purpose locomotives that could pull freight or passenger trains up the steepest Ozarks grade.

The drive wheels on the engines measure 70 inches tall. The engines weigh approximately 350,000 pounds. Coupled behind them was an oil tender that could haul 4,500 gallons of fuel for the hungry firebox and 12,000 gallons of water. They cost $70,000 each. These engines could hit speeds of 70 mph.

No. 1501 and the other series engines ran from Union Station in St. Louis to Oklahoma City, and from Kansas City to Birmingham, Alabama. Both routes were 700 miles in length. They pulled well-known passenger cars such as the Texas Special, Meteor, Sunnyland and the Blue Bonnet.

Its last run came in the 1950s as diesel power replaced steam on the Frisco line. Scheduled steam operation was phased out on the Frisco by February 1952, although some steam engines were used in reserve until 1956. The Frisco itself lasted from 1876 until 1980, when it merged with the Burlington-Northern.

On Jan. 25, 1955, old No. 1501 was presented to Phelps County along with a passenger coach built in 1883 by the Smith Barney Co. When the engine arrived in Rolla, 1.7 million miles had passed under its wheels.

In 1988 the pistons were removed from the engine and used to restore No. 1522 as a working steam engine, which operated as an excursion train until 2002. Other parts were removed by vandals, including the original bell. Its latest restoration painstakingly returned it to its former glory to keep alive the age of steam for several more generations.

Frisco No. 1501 pulls the Texas Special under steam outside St. Louis in 1941. In the bottom photo it is shown with its crew and with the volunteers who helped move it to Rolla.