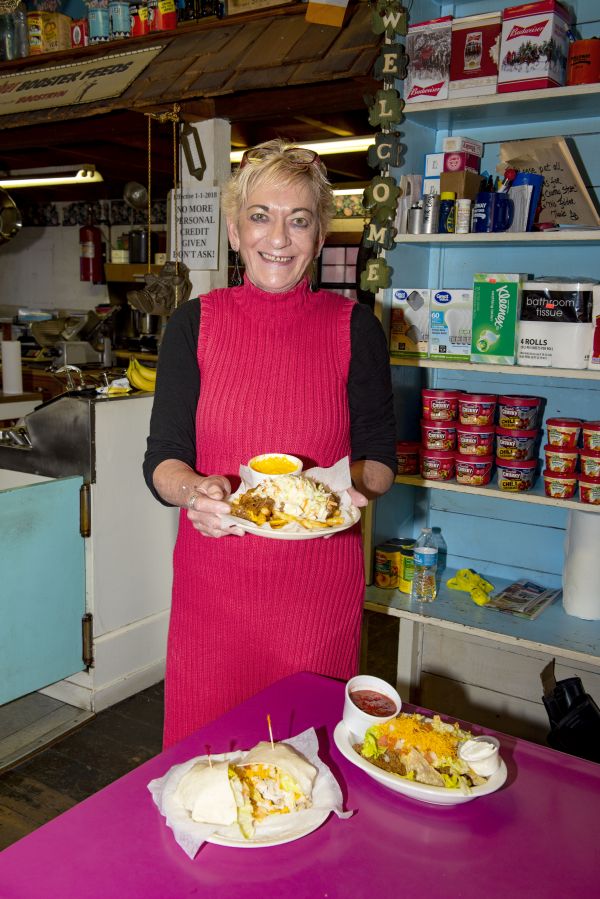 Serving breakfast, lunch and more since 1906

When you fi nd yourself at the junction of highways 49 and 32 in southeast Missouri, you’re smack dab in the heart of Bixby, population 438. The hub of the village seems to be twofold: the Doe Run mineral mines and the Bixby Country Store.

“The busiest time of day here is 3 a.m.,” notes Bridget Bohac, owner of the welcoming rural shop, which also houses the local post office. “The men and women stop here in the mornings to pick up hot biscuits and gravy or a sandwich and coffee, then off they go to work.”

It doesn’t take long for newcomers to pick up on Bridget’s gentle Irish lilt when she speaks. The Black River Electric Cooperative member says her accent was much more pronounced when she and her husband, Antonin, bought the store nearly 20 years ago. But if you listen, you’ll catch the infl ection in her voice as she chats with customers.

The Bohacs traveled across 28 states over the years while Antonin worked as a mechanical engineer in the mining business. When he was sent to Missouri to work with Doe Run, the couple fell in love with the area. They decided to settle in Iron County because the land reminded them of Ireland.

When Bridget saw the convenience store was up for sale, she knew she had to buy it. With her prior culinary training in Ireland and the gift of gab, she became the 11th owner of Bixby’s old-fashioned quick-stop.

Born and raised in County Meath, south of Dublin, Ireland, Bridget and her husband from the Czech Republic emigrated to the United States in 1979, later becoming American citizens.

“I told my mother I’d be back in six weeks, and you know what? I didn’t come back for 5 years,” she recalls.

The original store opened in 1906 and according to local accounts has never been closed between owners. Many of the past owners were relatives. So when the Bohacs purchased the place, Bridget says prior owners didn’t know what to think of her, but says now she’s “just part of the family.”

Those stopping by Bixby Country Store shouldn’t expect tablecloths and fancy dinner plates. Bridget and a staff of four run the entire place, so they might be taking food orders, selling sundries and ringing up fuel.

The menu reads that breakfast is served from 6 a.m. to 10:30 a.m., but Bridget says to ignore that. “We’ll fi x it all day long,” says the friendly owner.

While biscuits and gravy seem to be the odds-on favorite for most early birds, Bridget says their made-to-order ham or sausage breakfast sandwiches served with a fried egg and cheese are popular. The Triple “B” Sandwich consists of a fried egg heaped with hot, crispy thick-cut bacon, then layered with melted cheese. Another choice to begin the day is The Bixby Omelet, a simple two-egg creation with choice of bacon, ham or sausage and cheese. Just want a couple of scrambled eggs and coffee? Or a steaming stack of pancakes? This is the place to stop. Anything else you have a hankering for — such as hash browns, toast and jelly or extras of anything — are sold a la carte. 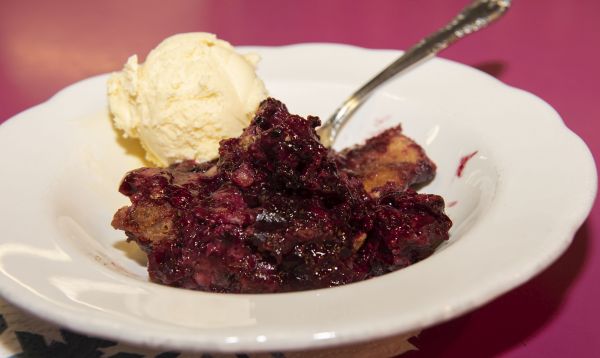 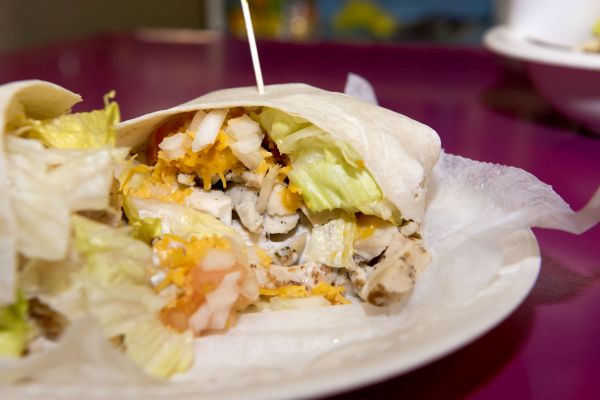 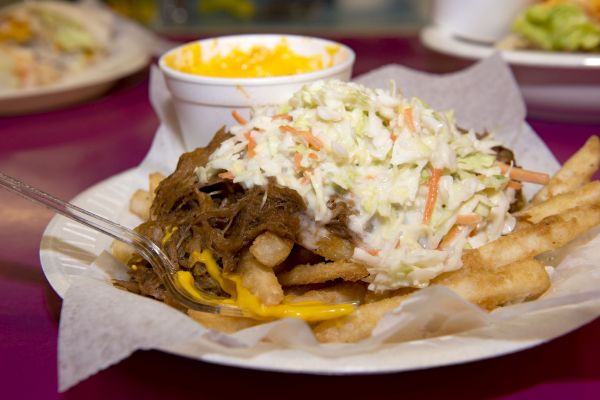 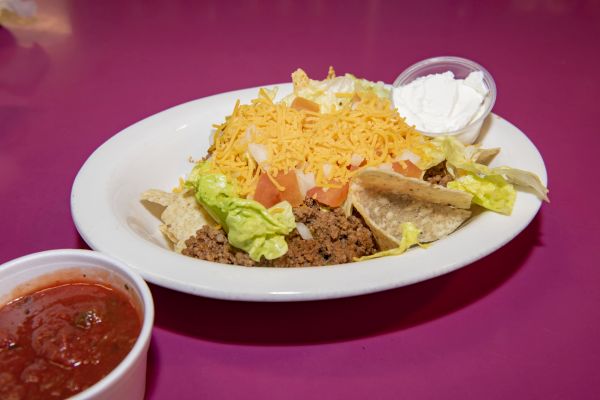 The Cager Chicken Wrap is packed with fried chicken, cheese, lettuce, onions, Ranch dressing wrapped inside a large fl our tortilla. Dirty Fries includes warm pulled pork over hot fries, then topped with slaw. You can grab a taco salad with either beef or chicken. Don’t forget to order some blackberry cobbler and ice cream for

A small room in the back offers several tables for patrons. There’s also a train caboose next door which is especially sought-out by kids. But if you’re planning to stay at the store to eat, sit at one of the long picnic tables (or “liar’s tables” as Bridget refers to them) near the diner counter so you can catch the news of the locals. Besides, you’ll want to hear the chug-chug of the old Lionel train clipping along the tracks overhead or view the collectibles on display.

The menu offers 24 sandwiches for those not preferring breakfast and the staff aims for each one to weigh a full pound. Hearty options include the PoorBoy Man, a “man-sized sammich” heaped with bologna, ham, salami, American, Swiss and cheddar cheeses. The Super Duper State Trooper is a “Hoss of a sandwich,” mounded with ham, roast beef, turkey, Colby, Swiss and American cheeses. The Beef & Cheddah is roast beef, cheddar cheese melted over a warm onion bun. Prefer chicken? Order the Cager Chicken Wrap, fried chicken with cheese, lettuce, tomatoes, onion, Ranch dressing and wrapped in a big tortilla.

The Way Out in the Country Club includes thin-shaved turkey or ham with bacon, lettuce, tomato and mayonnaise and layered between three slices of toast. The Fill-Me Up Cheese Steak Sandwich, dubbed a “behemoth of a racked and stacked snack,” is loaded with either beef or chicken, grilled green peppers, onions and plenty of cheese.

“Rabbit food” as the menu calls salads, includes a good-sized garden salad with the usual fi xings, a chef salad, with ham or turkey freshly sliced and piled on greens, and a beef or chicken taco salad with lettuce, tomato, onion, cheese over tortilla chips and served with salsa and sour cream.

Remember some of the more unusual sandwiches your grandparents may have eaten? You can get those here, too. Opt for a tuna salad, salami, bologna, pickle loaf, or even old-fashioned Braunschweiger or Head Cheese (a cold cut made from meat most commonly trimmed from pig or calf).

There is one time of year near and dear to Bridget’s heart: St. Patrick’s Day. “I’m famous for my corned beef, cabbage and potatoes with white onion sauce.”

The owner says fans drive more than two hours for the meal, with the phone calls starting well before March 17 to ask if Bridget’s making the corned beef.

“I cook about 250 pounds of corned beef, 250 pounds of cabbage, 200 pounds of potatoes and I make about 14 gallons of white onion sauce,” Bridget says excitedly. “The phone never stops ringing when it’s St. Patrick’s Day.”

In the rare case there are leftovers, Bridget offers the special for two days, which both she and corned-beef fans enjoy.

On your fi rst visit, it’s likely Bridget will know your name when you leave. “I want to know everyone,” the friendly owner says “And I guarantee you’ll never leave hungry. 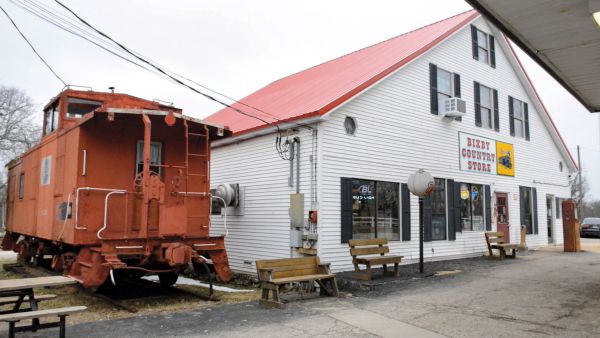 The Bixby Country Store also has a caboose where you can eat your meal. It’s a favorite spot for children.