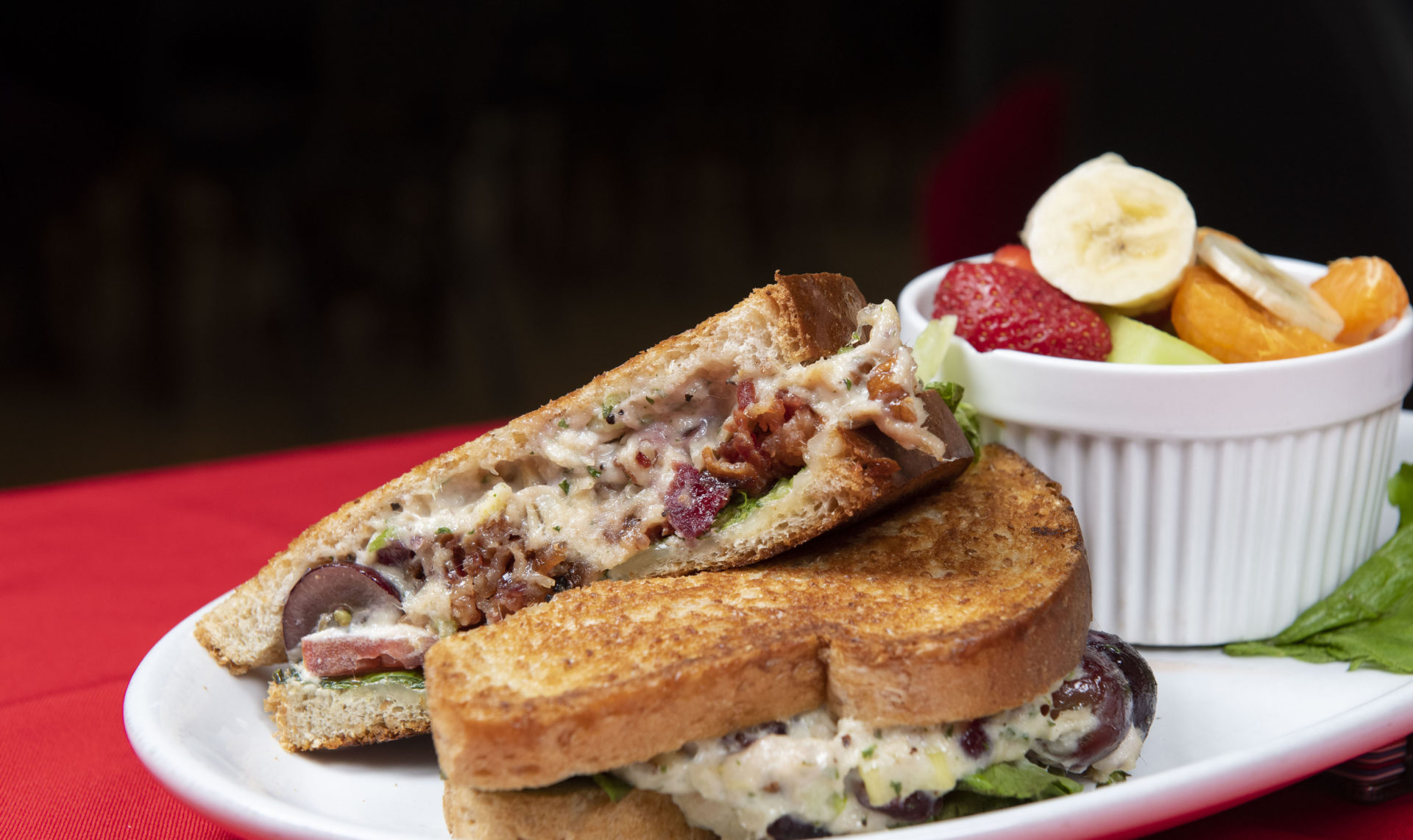 Most mornings in downtown Chillicothe you’ll find Brent Kepner where he’s been for the past 14 years; standing outside the front door, cup of joe in hand, greeting the sun and ready to welcome customers.

Walking through the front door of Boji Stone Cafe, Coffee House and Bookstore, it would be easy to mistake the eatery for someone’s living room or den. Concert posters, set lists and celebrity autographs paper the walls. The shelves are stocked with books covering topics from cooking to music to true crime. A rack holds oversized mugs with the names of regular VIP customers. All of it adds and speaks to the atmosphere Brent and his wife, Lindsay, have tried to build at Boji Stone for almost 15 years.

Brent kept the Boji Stone name — a reference to metaphysical healing rocks found in Kansas — from the previous owner. He explains the rocks are meant to cultivate a sense of unity and inner peace as well as bring people closer together.

“I’ve got to be honest, I’m not into all that but I really liked the name. I thought it was an interesting concept,” Brent says, then adds with a laugh, “Also, when I bought the place I didn’t have any money to change the signage.”

A Chillicothe native, Brent was perhaps better prepared than most to take the reins of a turnkey restaurant: Prior to moving back home, he’d spent 11 years co-managing a training store for Wendy’s International in Grapevine, Texas. He saw untapped potential in the downtown coffee shop he purchased from the owner in December 2006 — only a few months after his first day on the job. Today’s regulars picked up on that vibe the Kepners originally sought to cultivate, making the daily trip whether it’s a walk from the courthouse across the street or a drive from Bucklin. In pre-COVID times, the cafe might be the one restaurant in town where it wouldn’t seem out of place to see visiting duck hunters seated alongside the local bankers, chatting away.

“I’ve always wanted a place where everybody feels welcome,” Brent says. “It’s great on busy days when we fill up to see strangers sitting with each other.”

All the while, the espresso machine never stops buzzing. The first menu everyone checks in the morning at the coffee shop is chock-full of signature drinks, and the cafe’s beans are roasted by Mokaska Coffee Co. in St. Joseph. Two standout frappes are the Chilly Coffee Toffee — a play on the town’s name that combines English toffee, chocolate, espresso and steamed milk — and the Funky Monkey, which incorporates banana, chocolate and caramel. But whether you want a warm cup of caffeine or a fizzy concoction worthy of an Instagram post, the drinks are just a prelude to the dishes that bring hungry diners in from miles around.

“We’ve expanded the menu to more than 70 items now, which is pretty amazing out of the kitchen,” Brent says. “This used to be a clothing store, and we technically cook in their supply closet.”

From the humble kitchen, Lindsay and the staff turn out plate after plate of mouthwatering entrees, flavorful soups and homemade desserts. Lindsay prides the restaurant on using as many local ingredients as possible, sourcing beef and pork from Bachman’s Farm Store across the courthouse square. While Boji Stone’s massive menu only carries a dozen breakfast choices including the Kitchen Sink Casserole and Breakfast Burrito, there’s one clear favorite among the pack.

“Biscuits and gravy, by far,” Brent says without hesitation, noting it’s the only food item served all day. His favorite variant is the Big Country -— a biscuit topped with egg, ham, cheese and homemade sausage gravy.

After 10:30 a.m., the kitchen transitions to lunch and the crowd favorite switches from biscuits and gravy to Lindsay’s made-from-scratch chicken salad. The restaurant’s most popular dish starts with oven-roasted chicken which is then shredded and combined with pecans, green onions, dried cranberries, red grapes, celery, mayonnaise and some secret spices. The original version comes on a croissant, but the seasonal Club Melt variety is served on wheat berry bread with the addition of candied bacon, lettuce, tomato and Swiss cheese.

“I like comfort food, and I think a lot of the inspiration comes from learning a lot of these things from my mom,” Lindsay says. “We made everything from scratch. I think it’s important to keep everything as homemade as possible, and if you can get it local it makes a huge difference in how it tastes.”

With the focus on flavor, Boji Stone’s sandwiches are anything but simple. The mammoth Frisco Melt starts out with local ground beef fried in a cast-iron skillet, mixed with cheese sauce and grilled on Texas toast with cheddar cheese, caramelized onions and topped with Frisco sauce.

“It’s like a homemade Thousand Island — it’s sweet and creamy with some pickles and onions in it,” Lindsay says.  “The overall flavor is tangy, sweet and savory.” 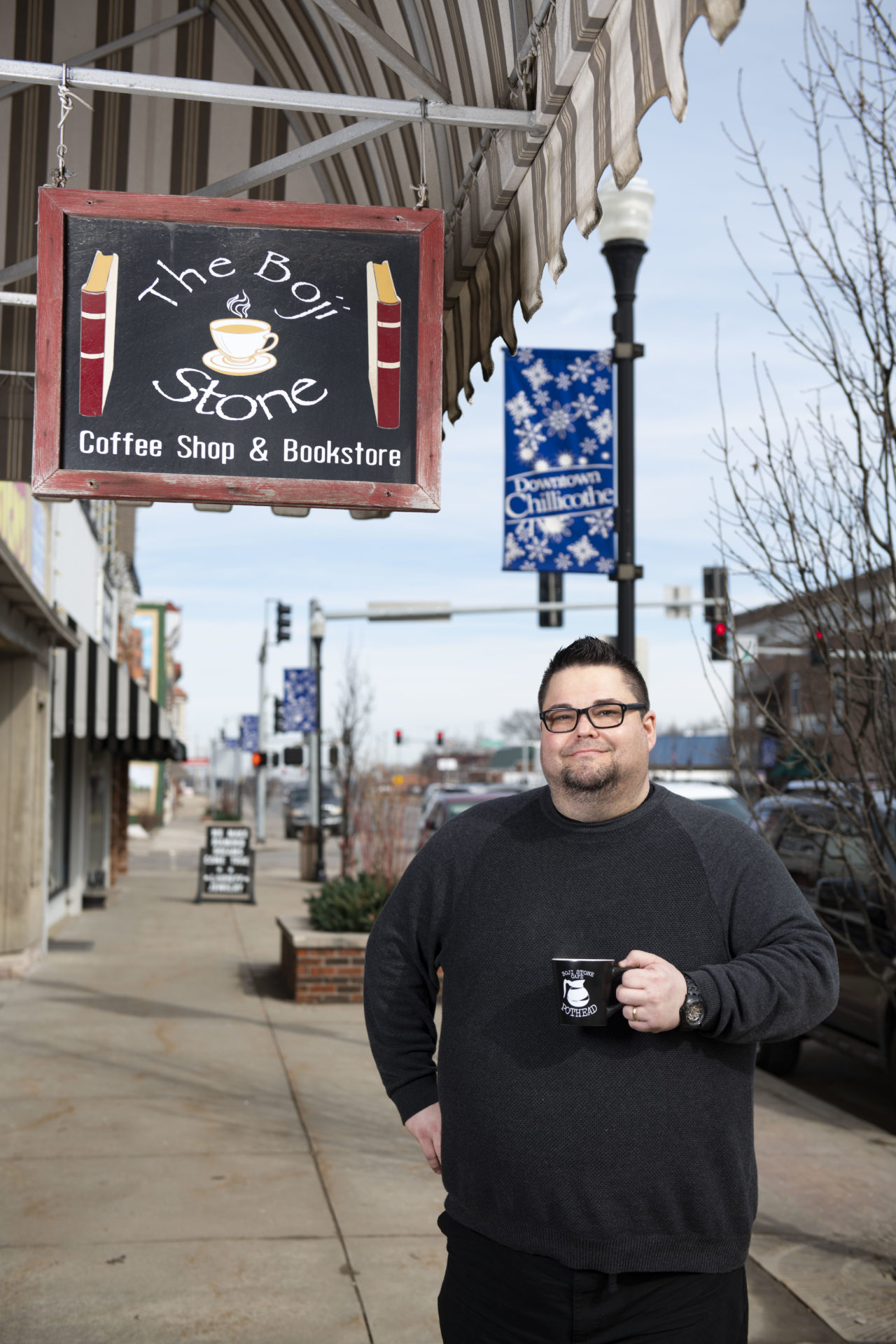 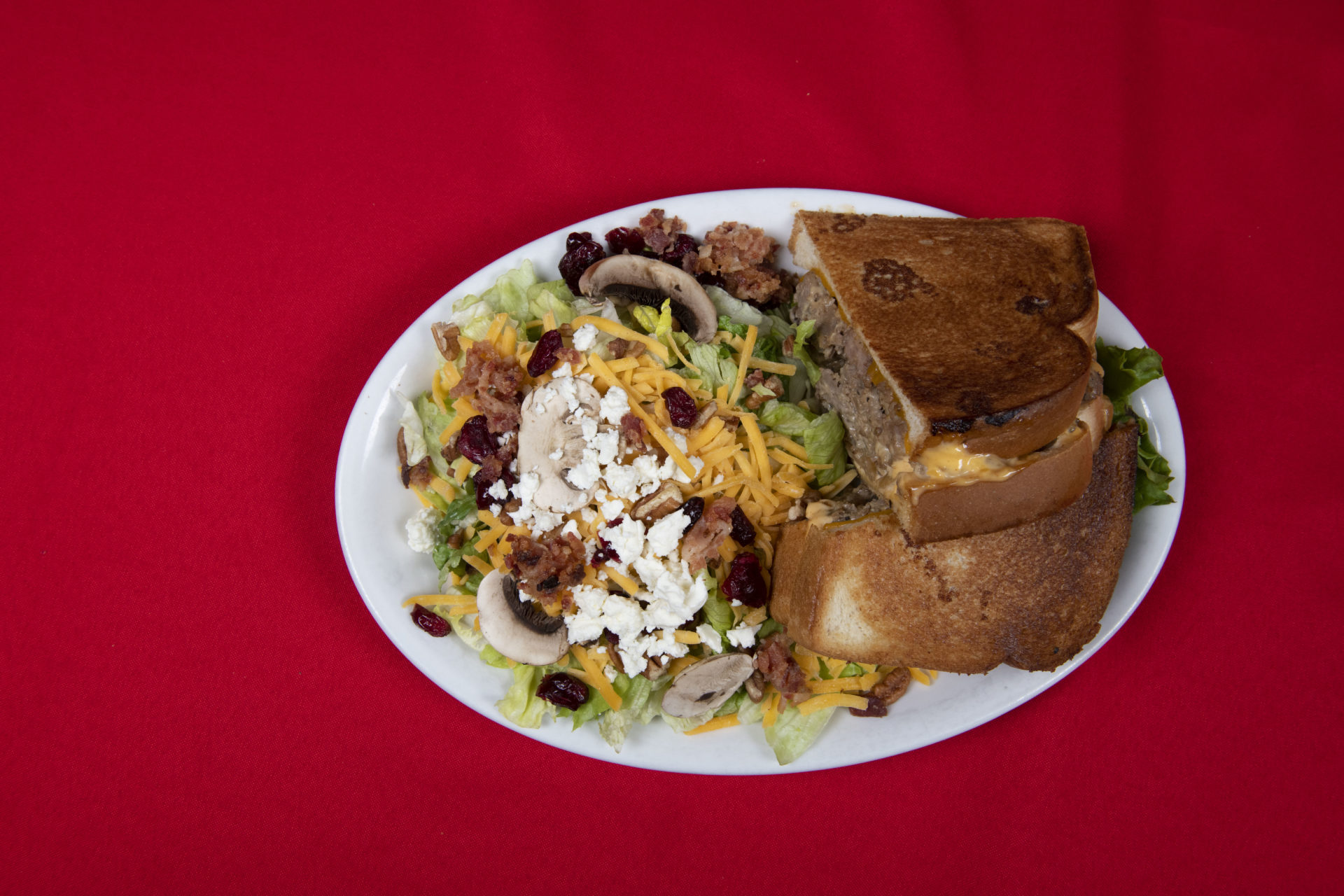 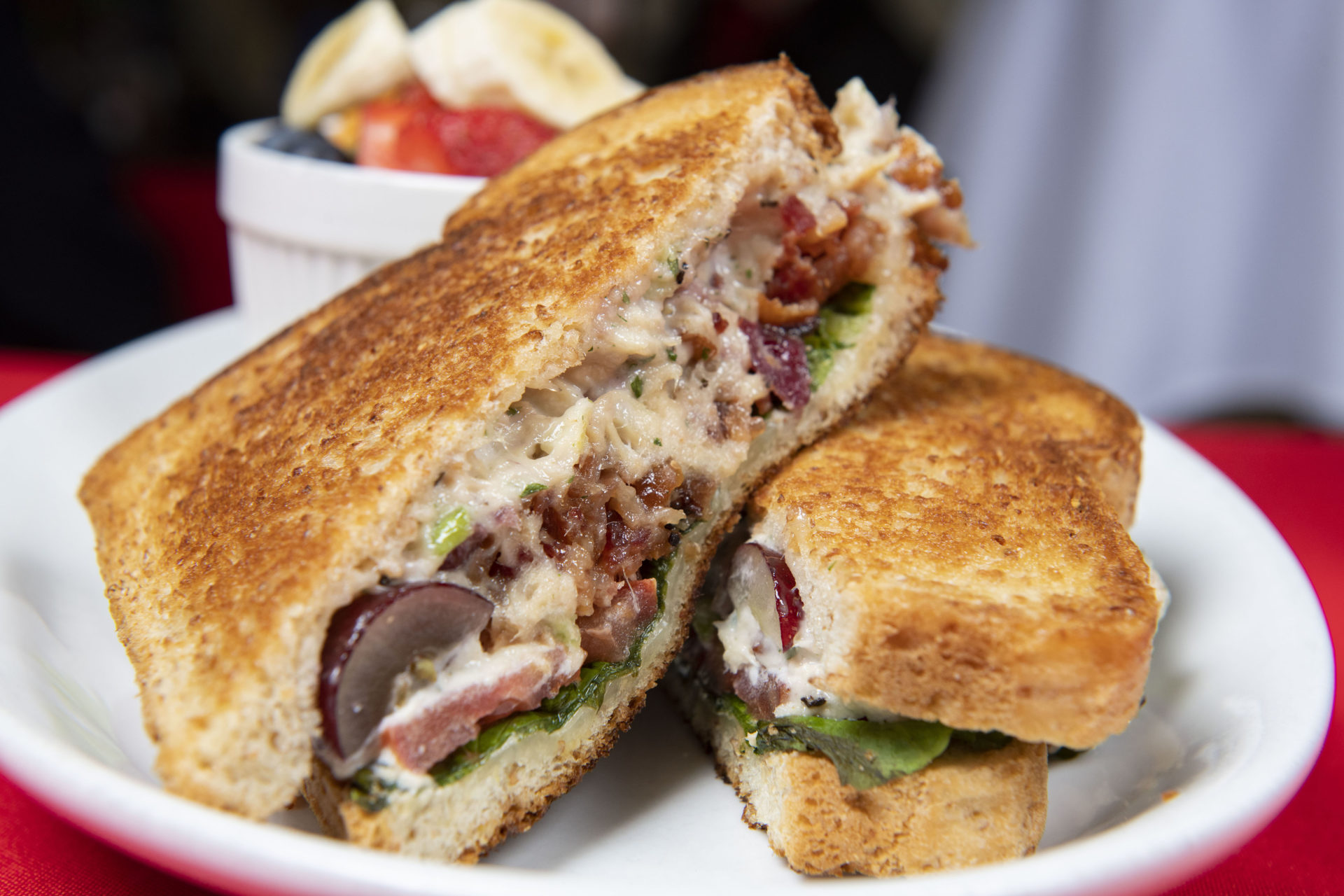 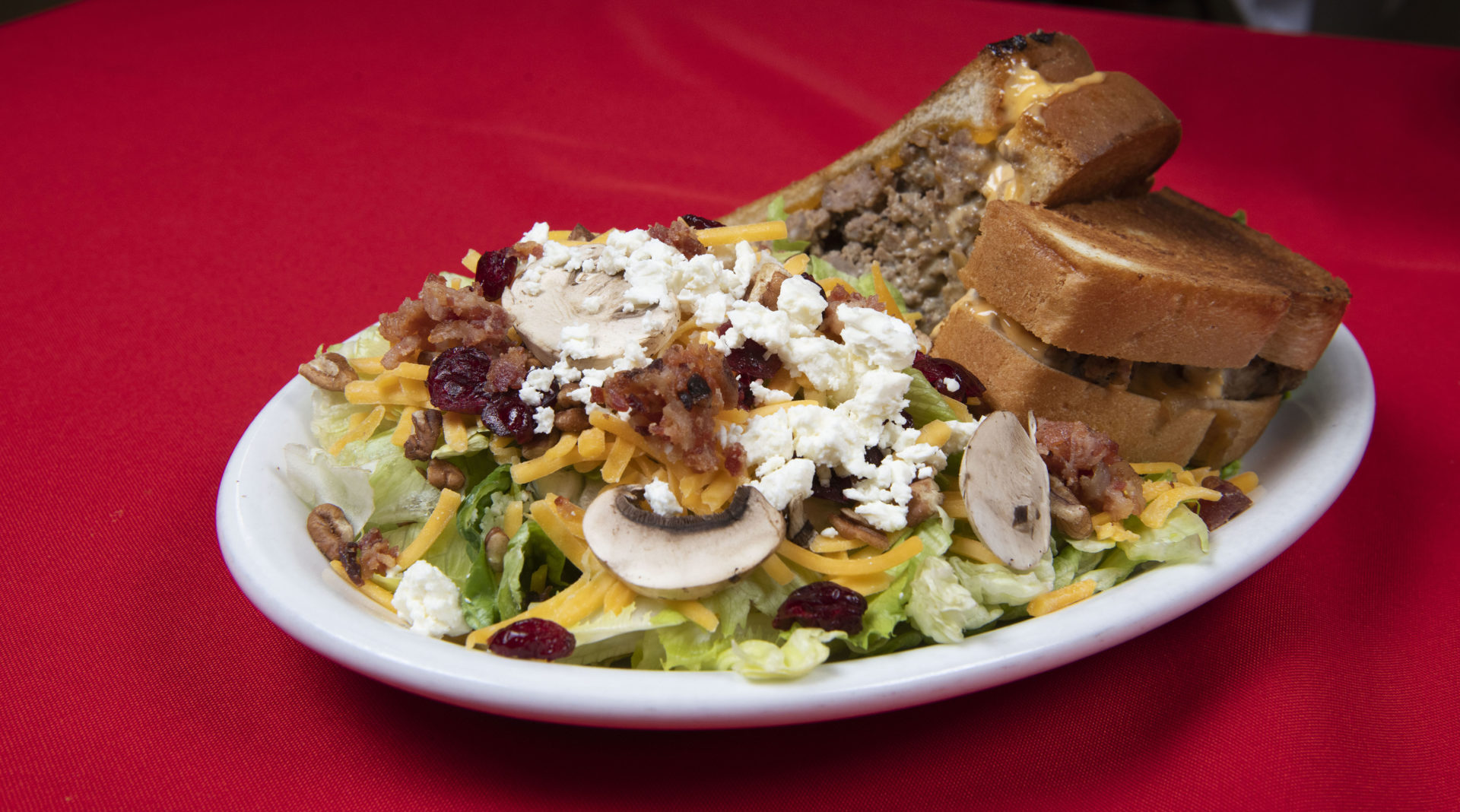 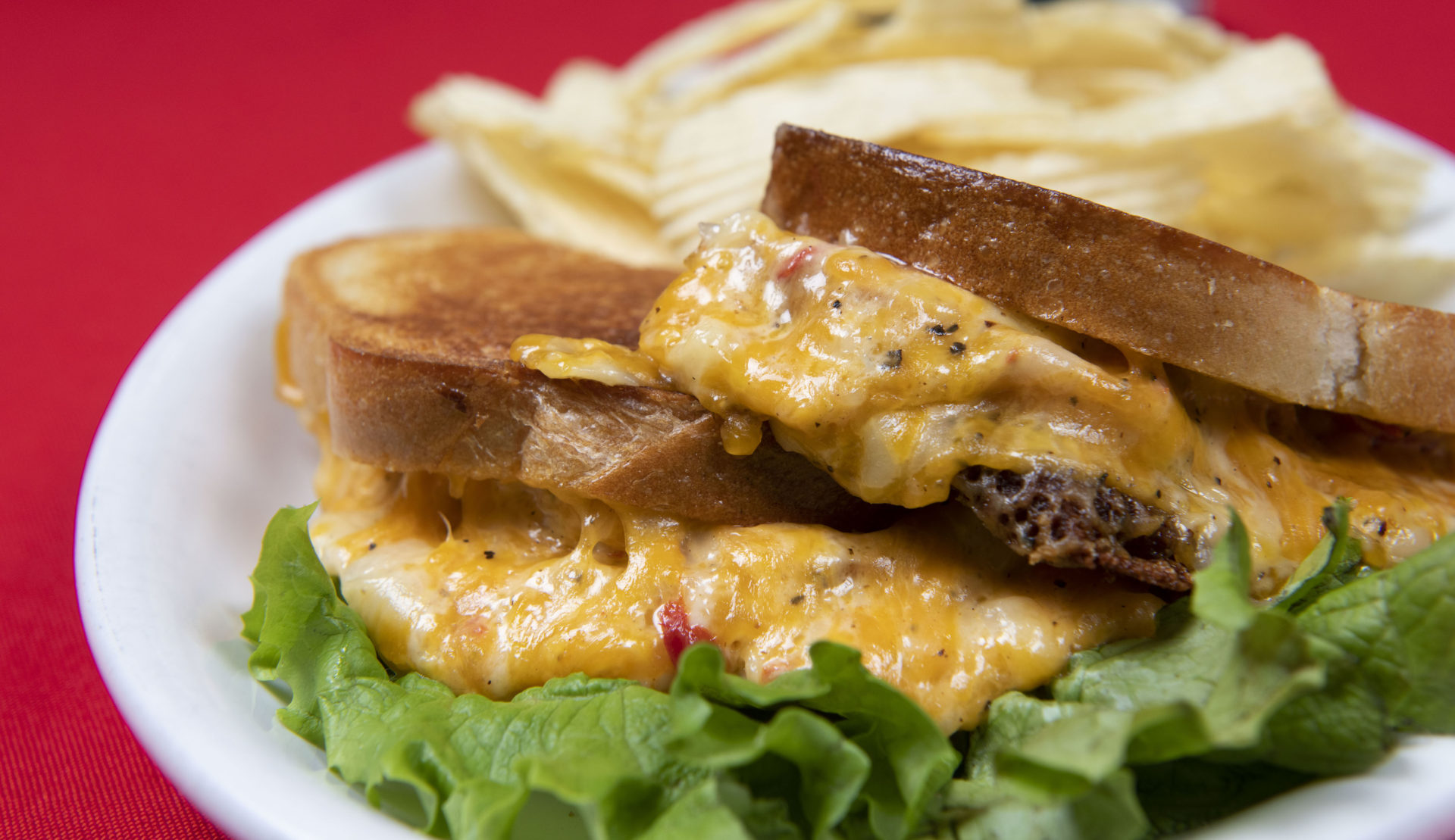 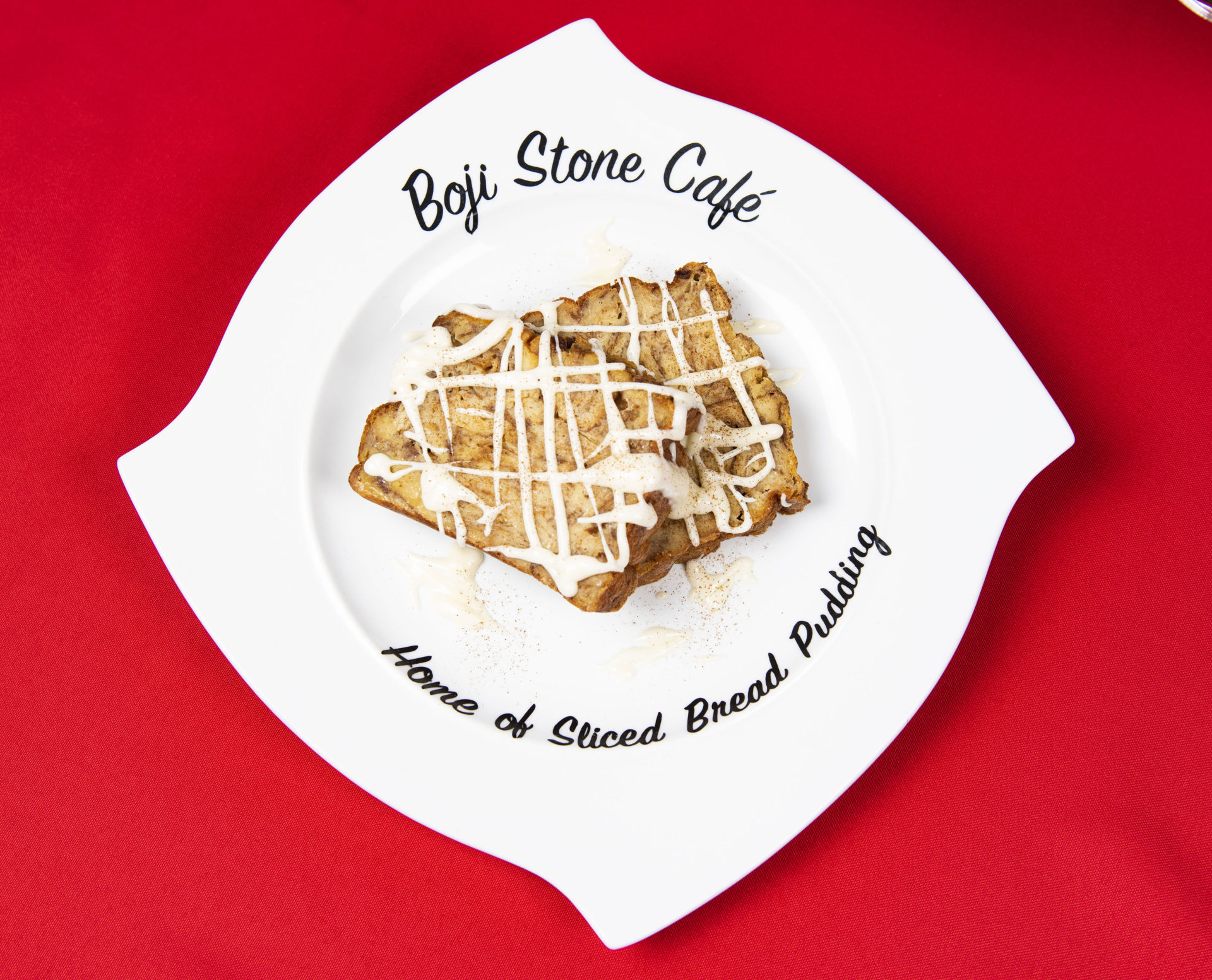 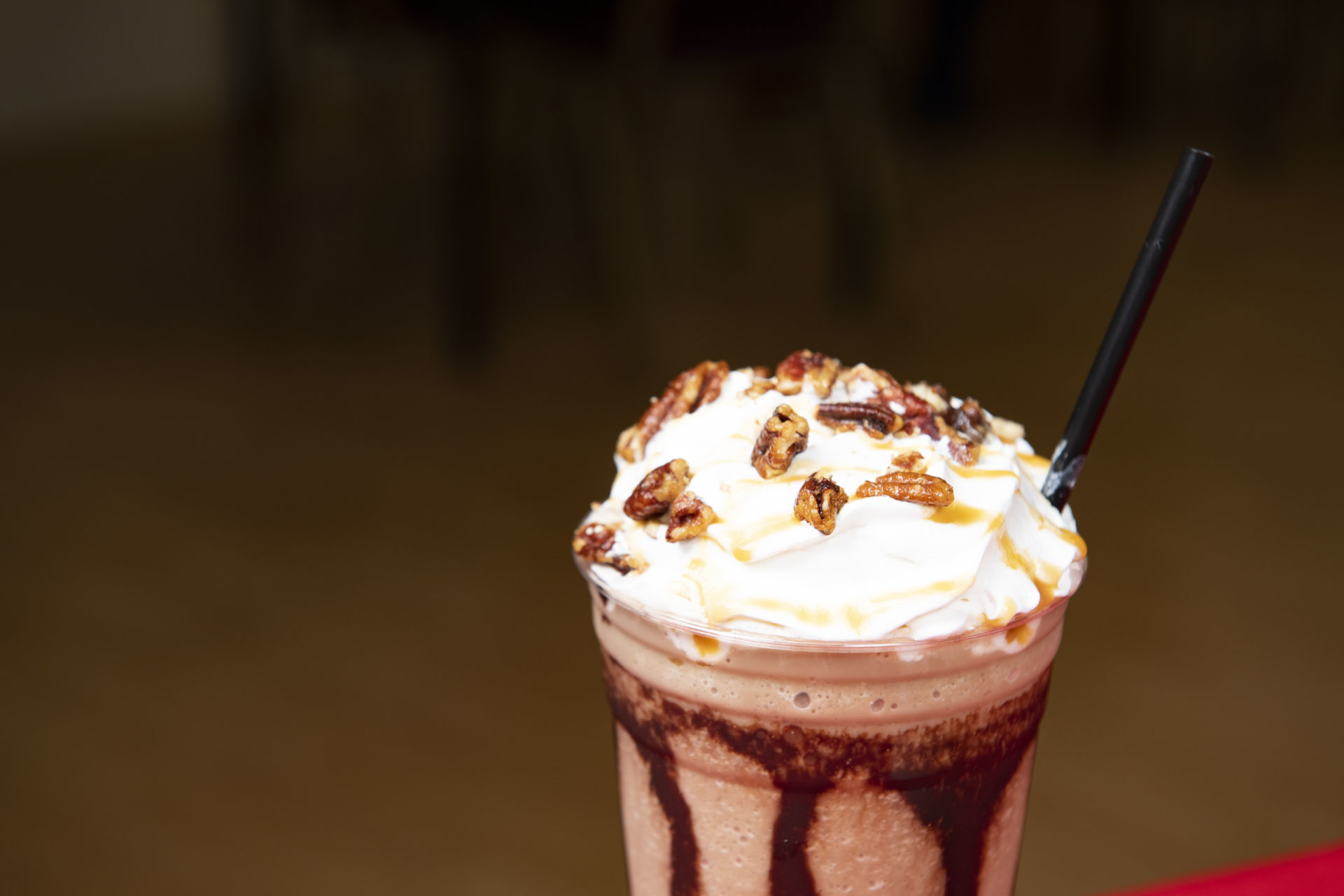 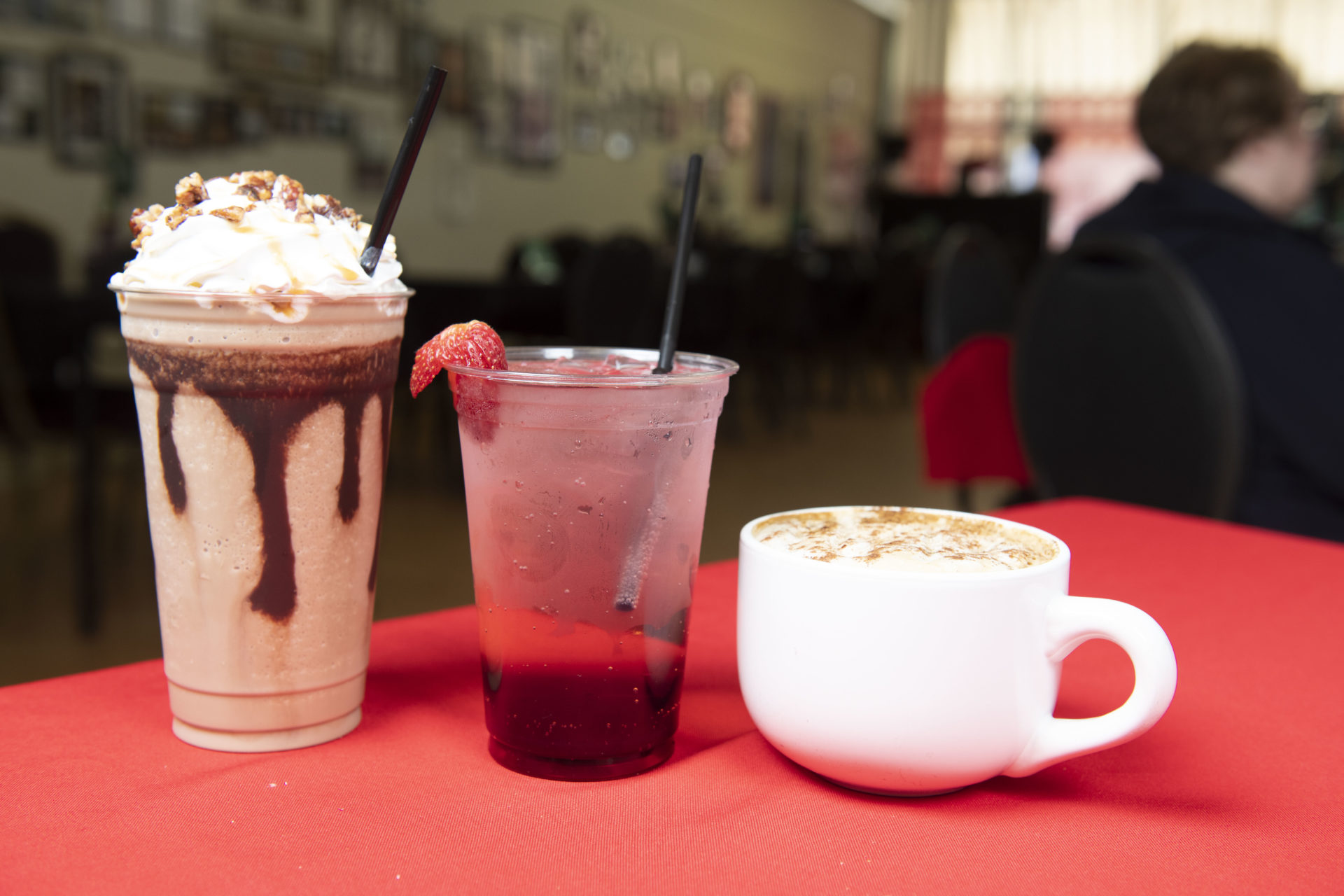 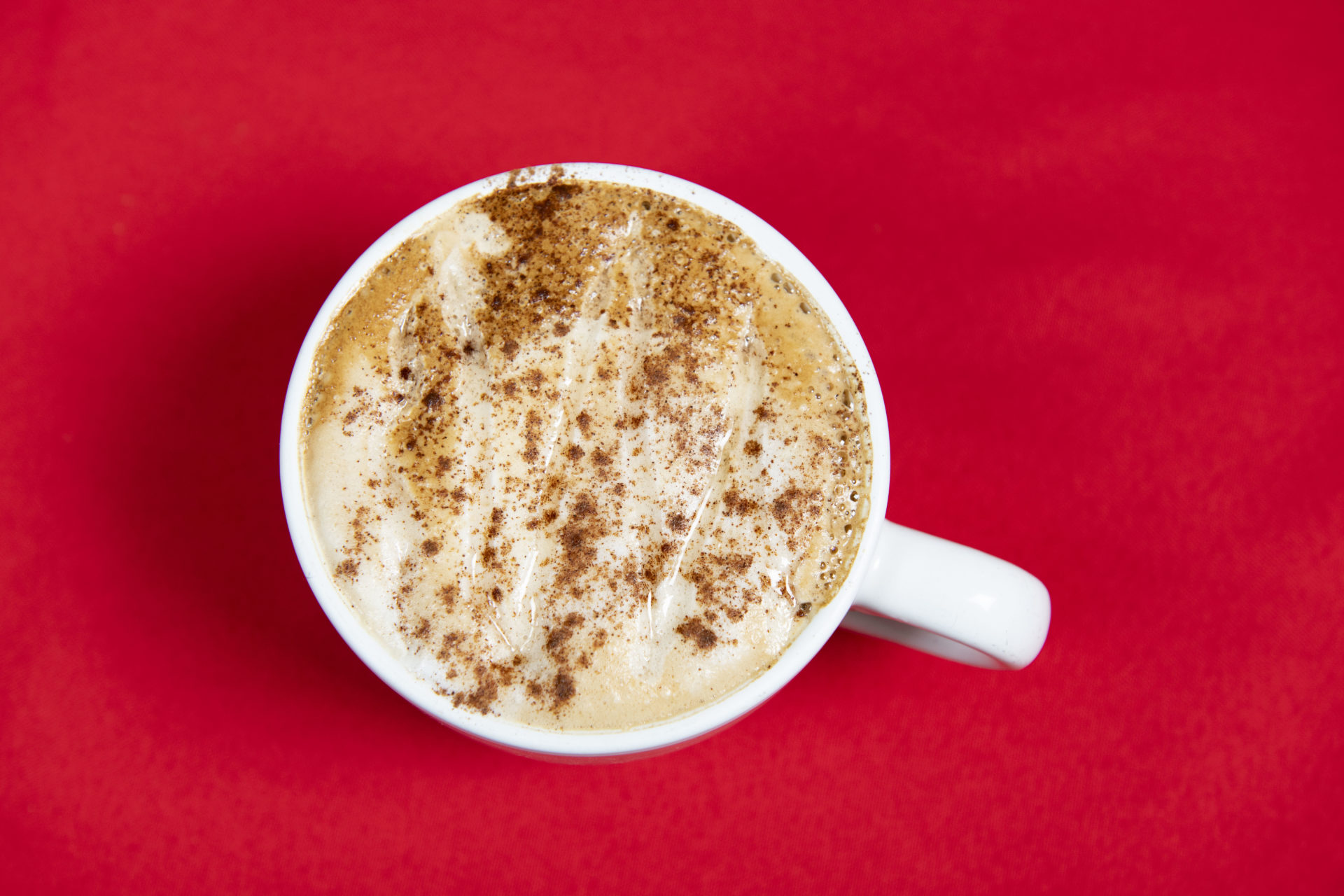 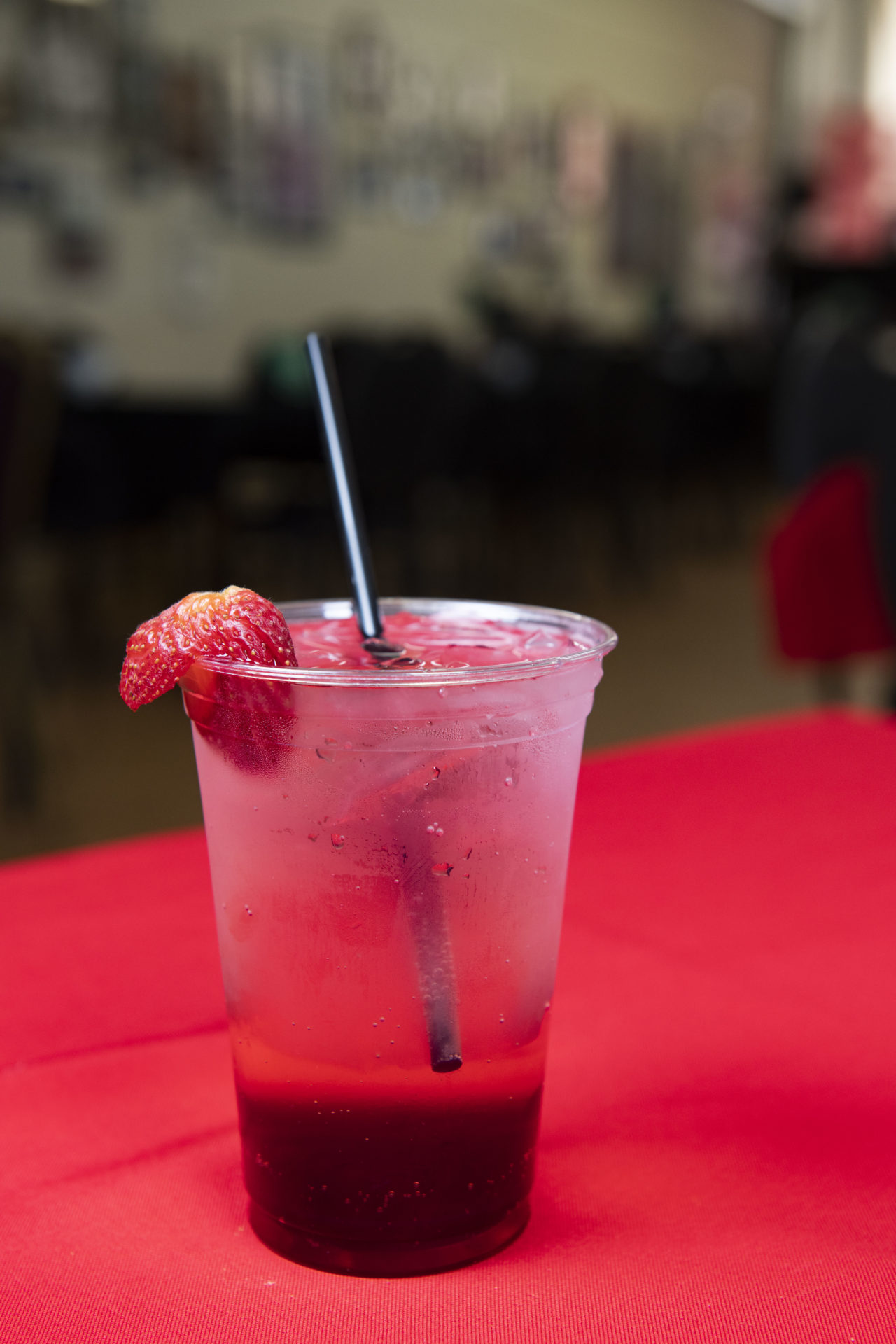 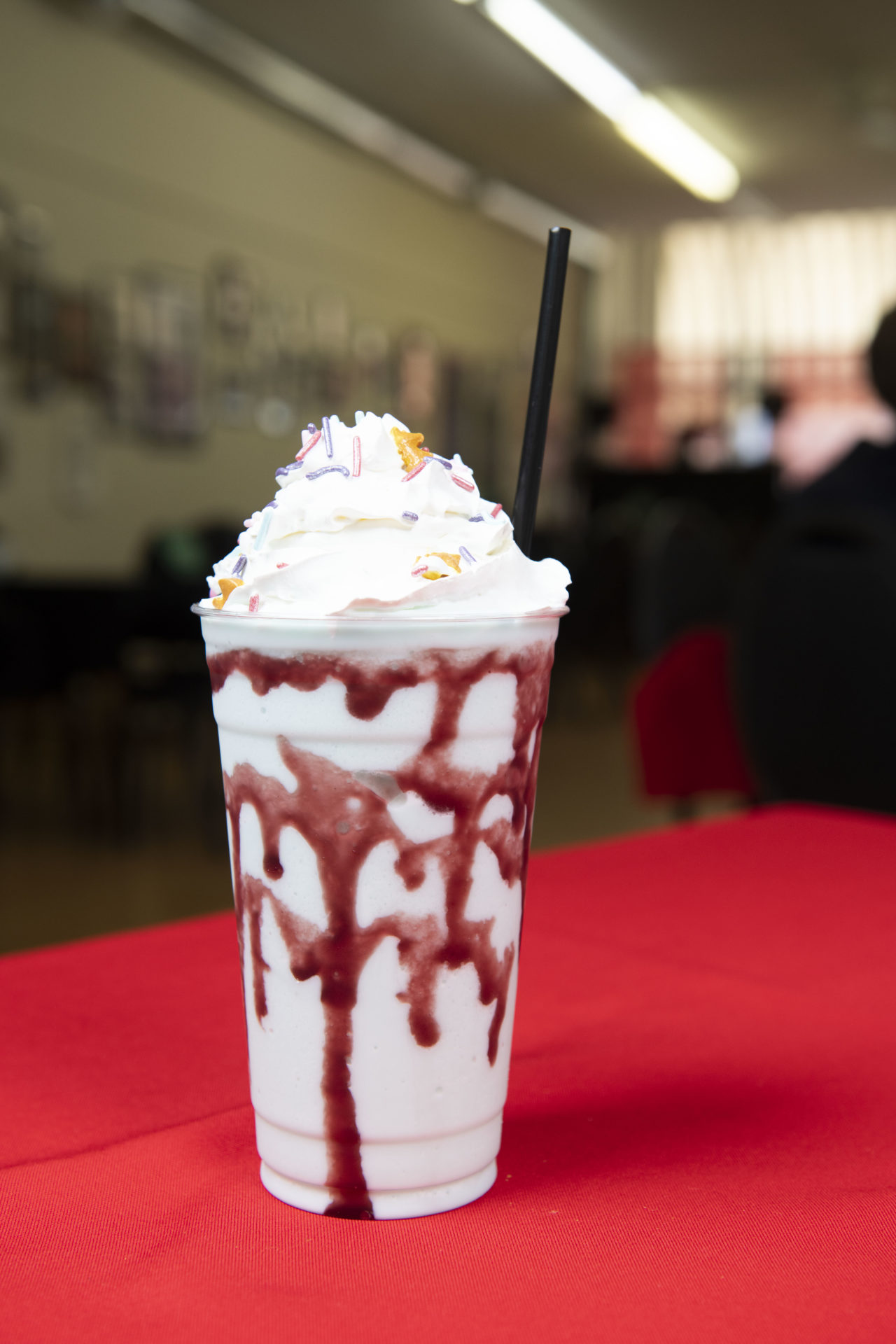 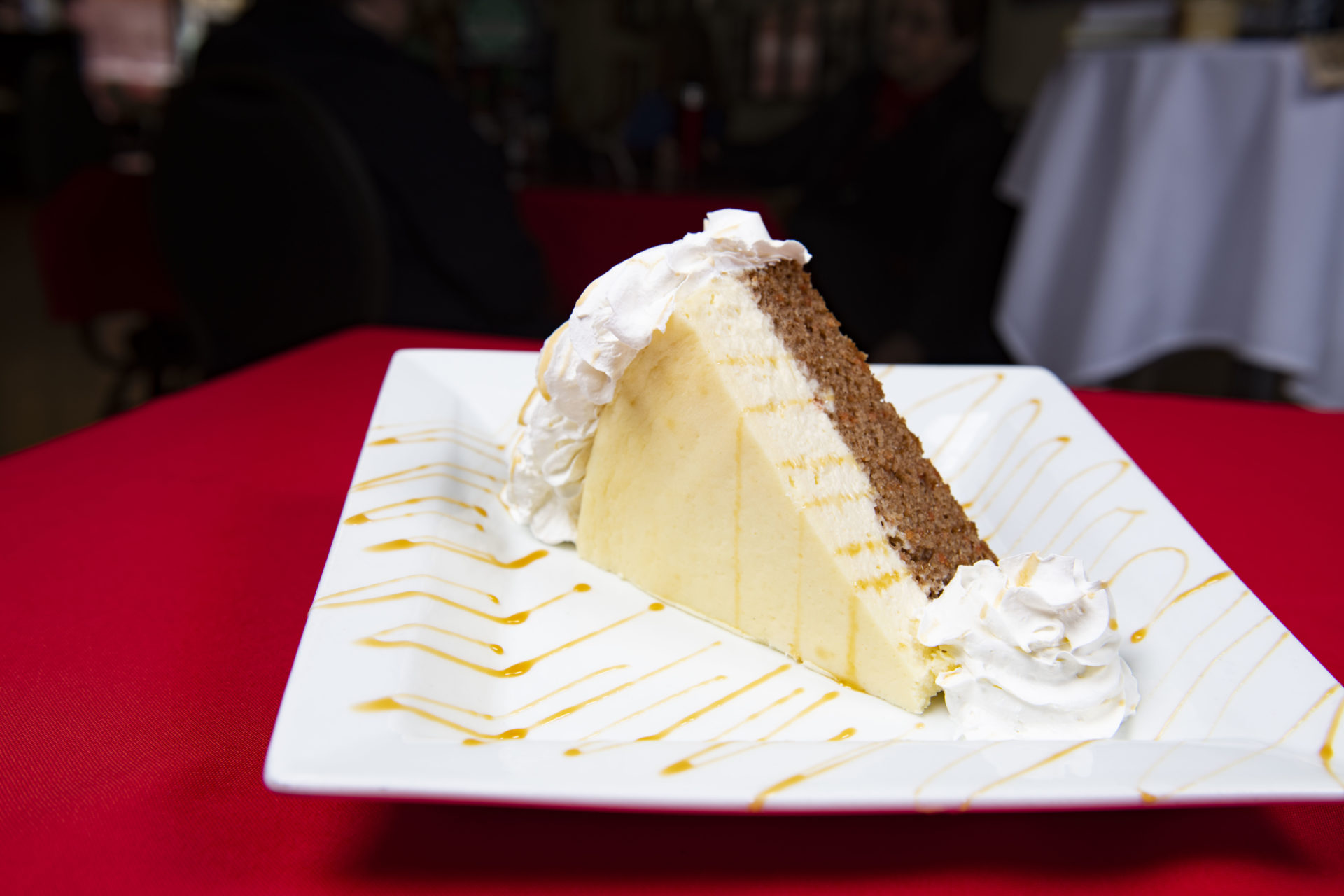 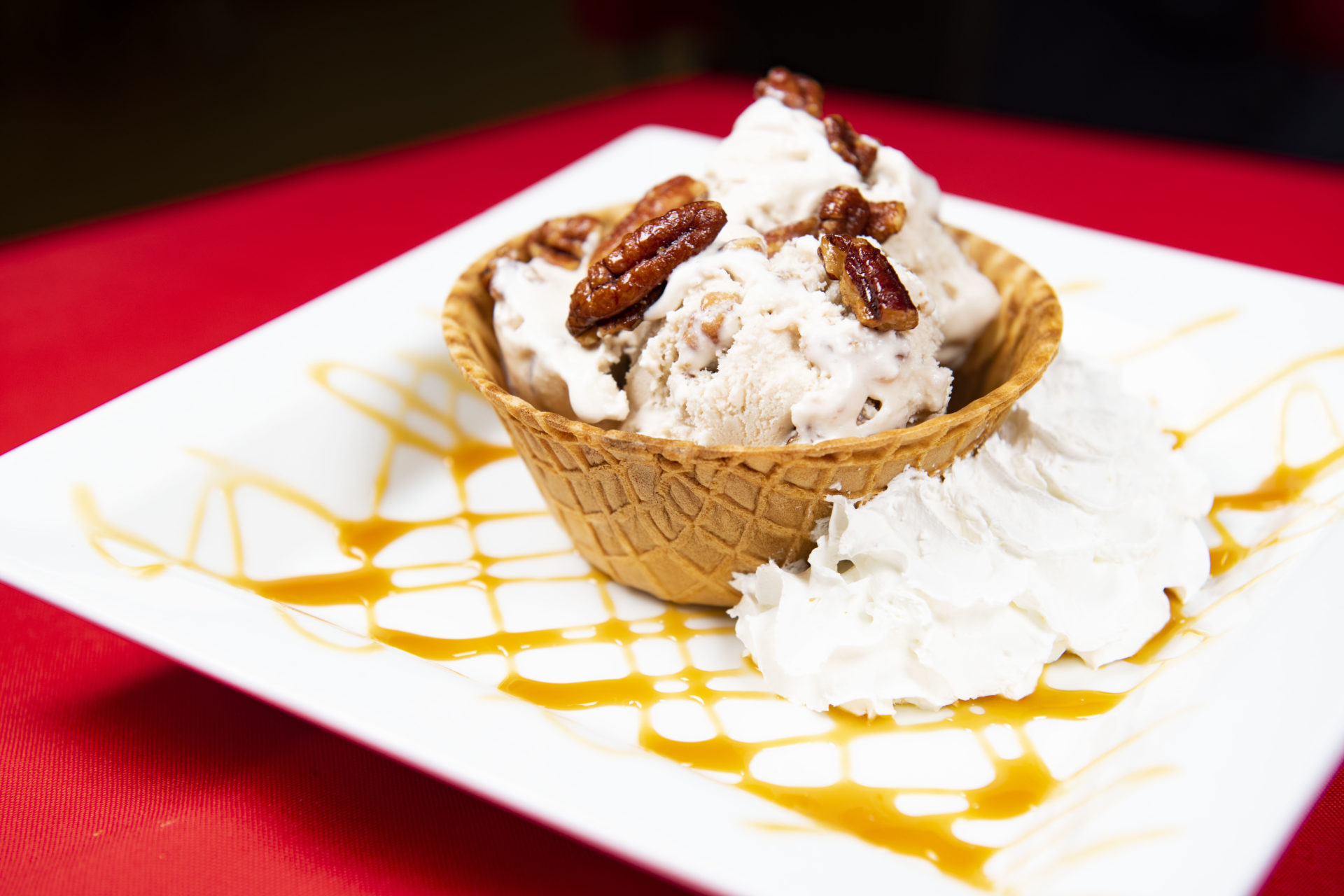 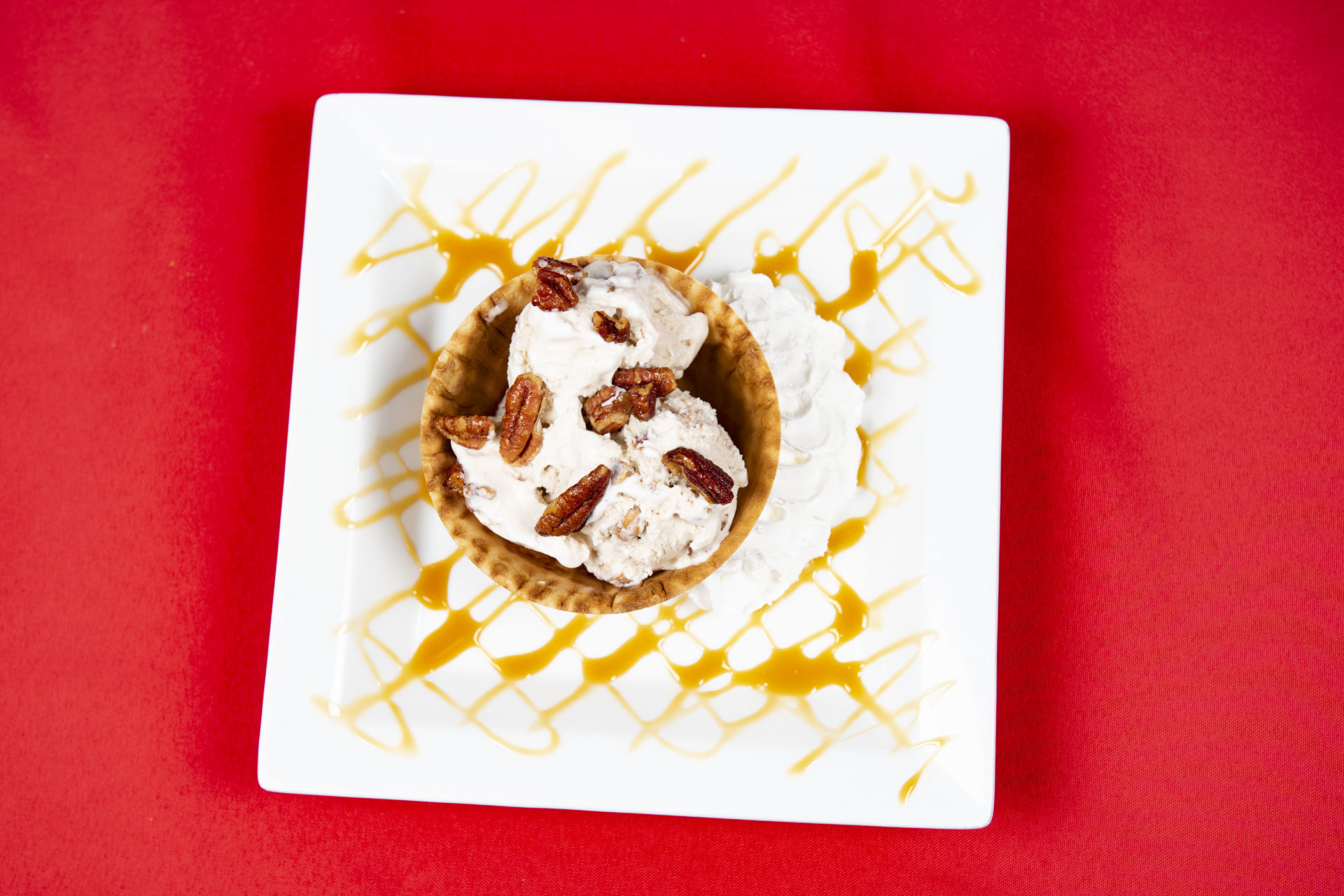 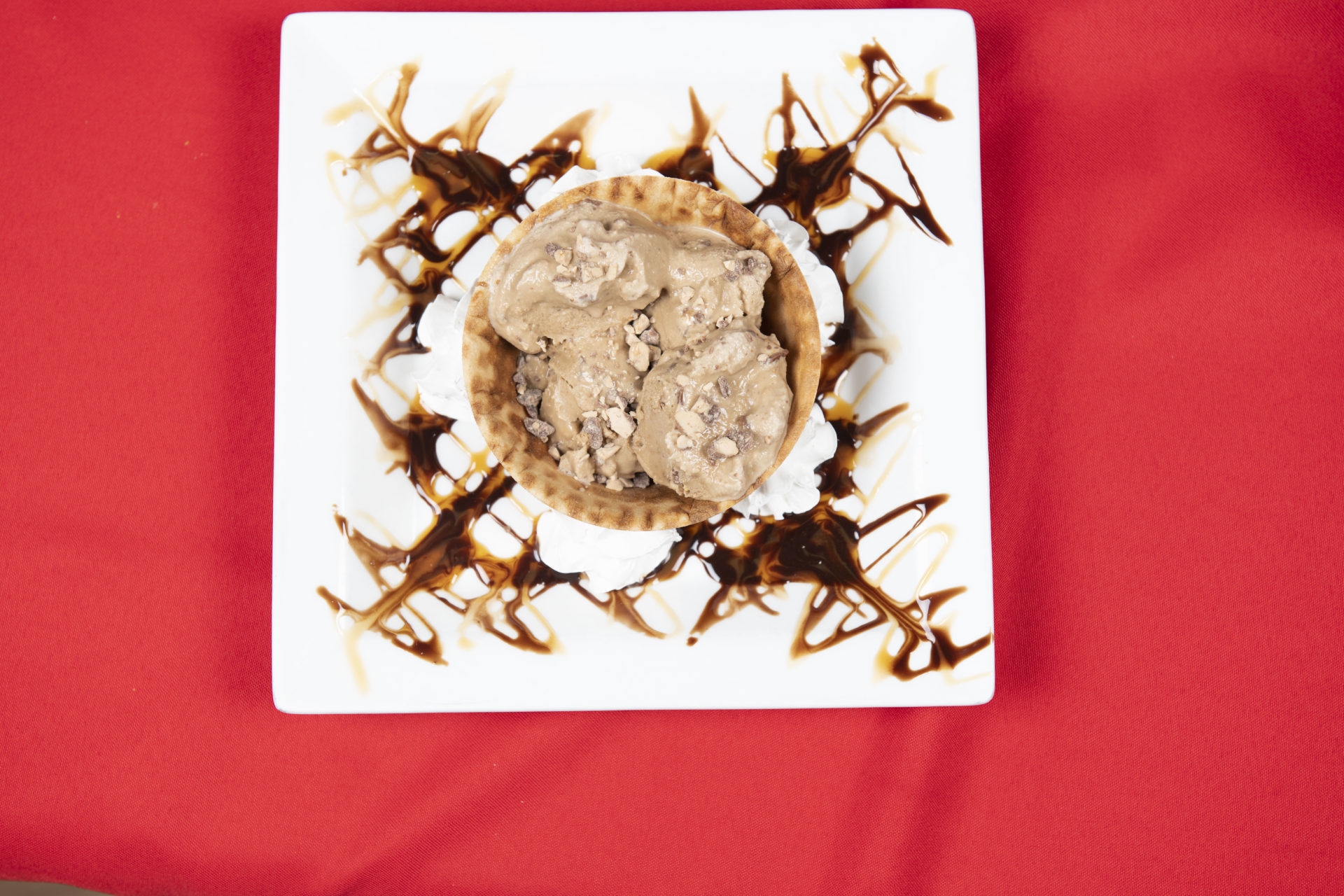 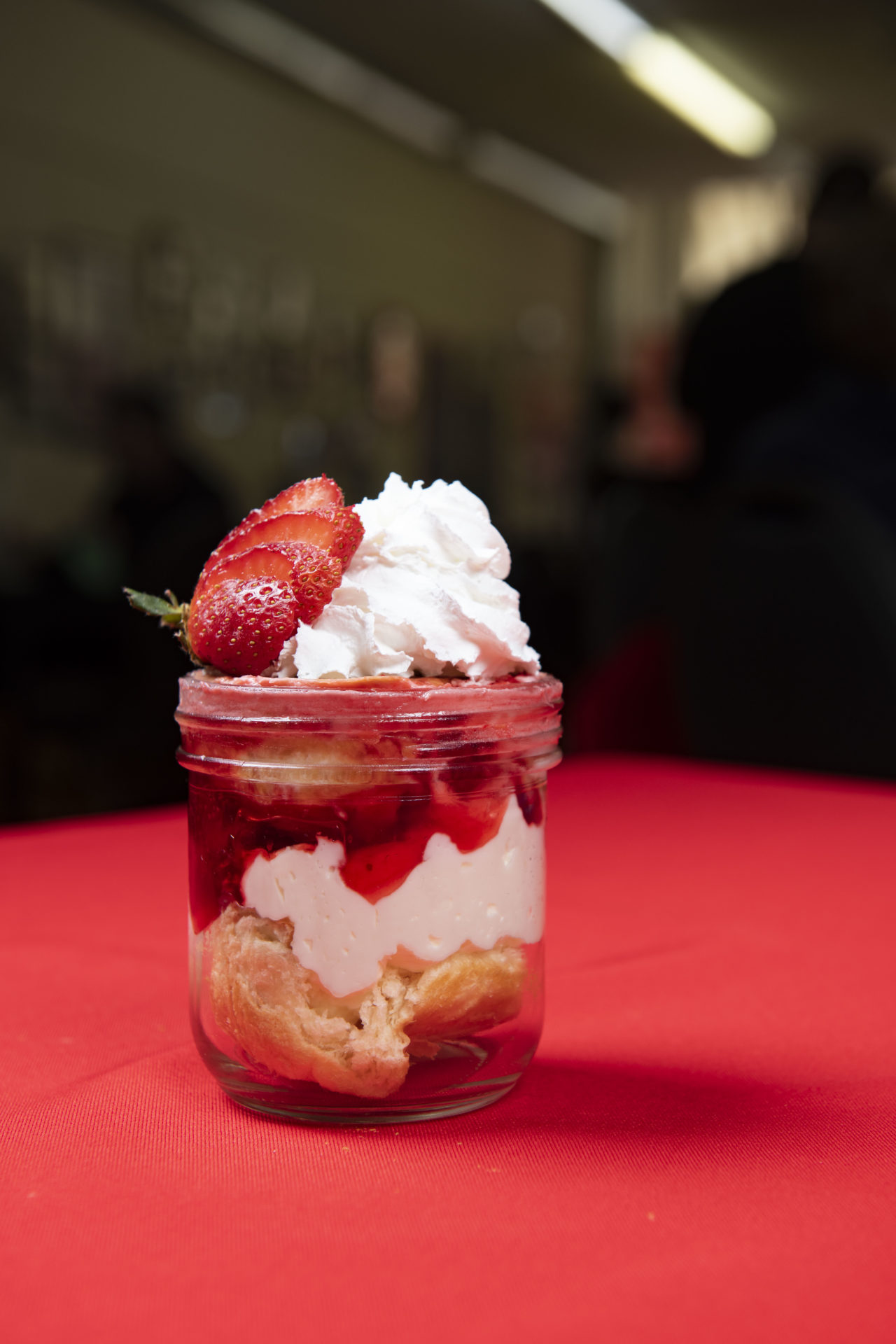 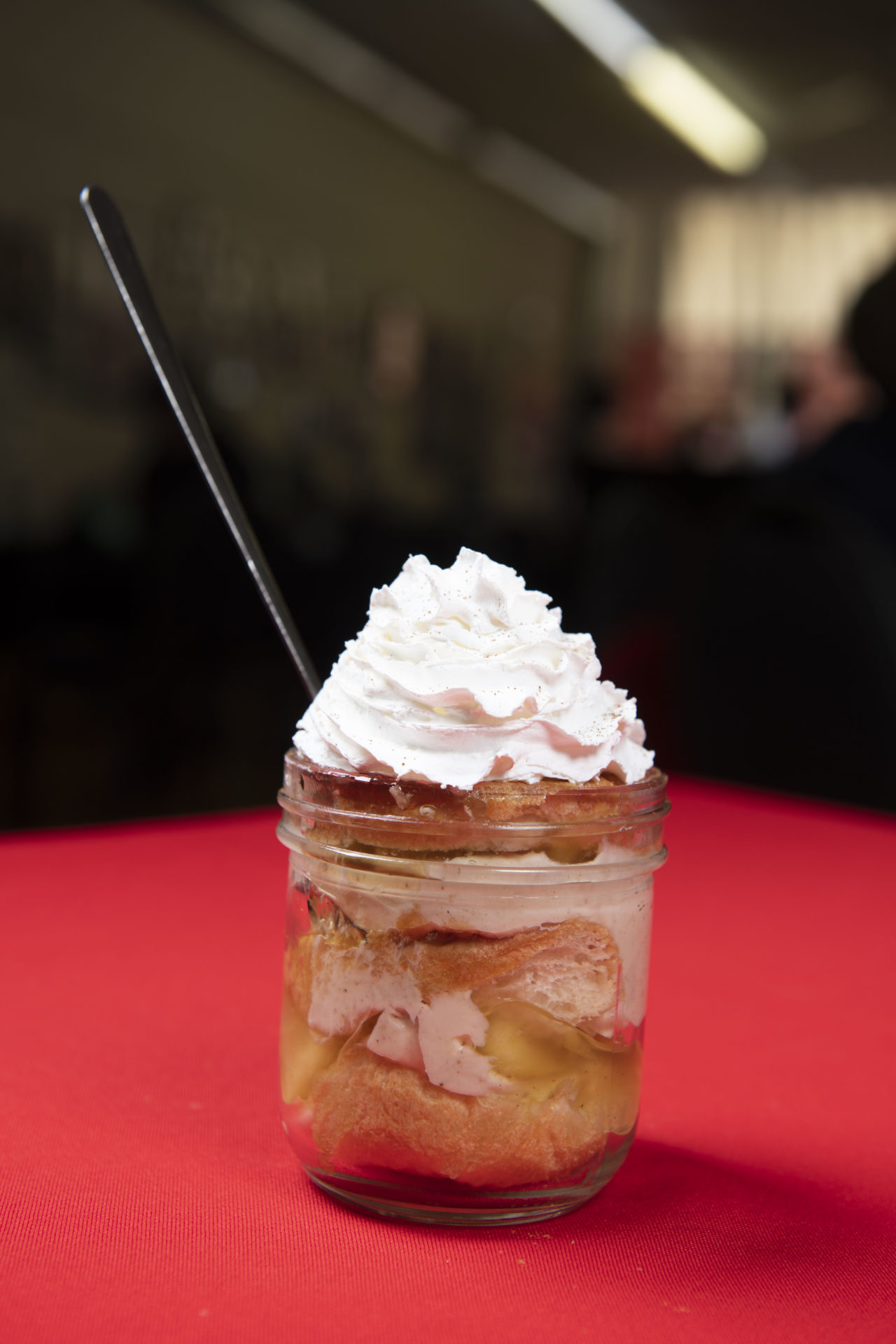 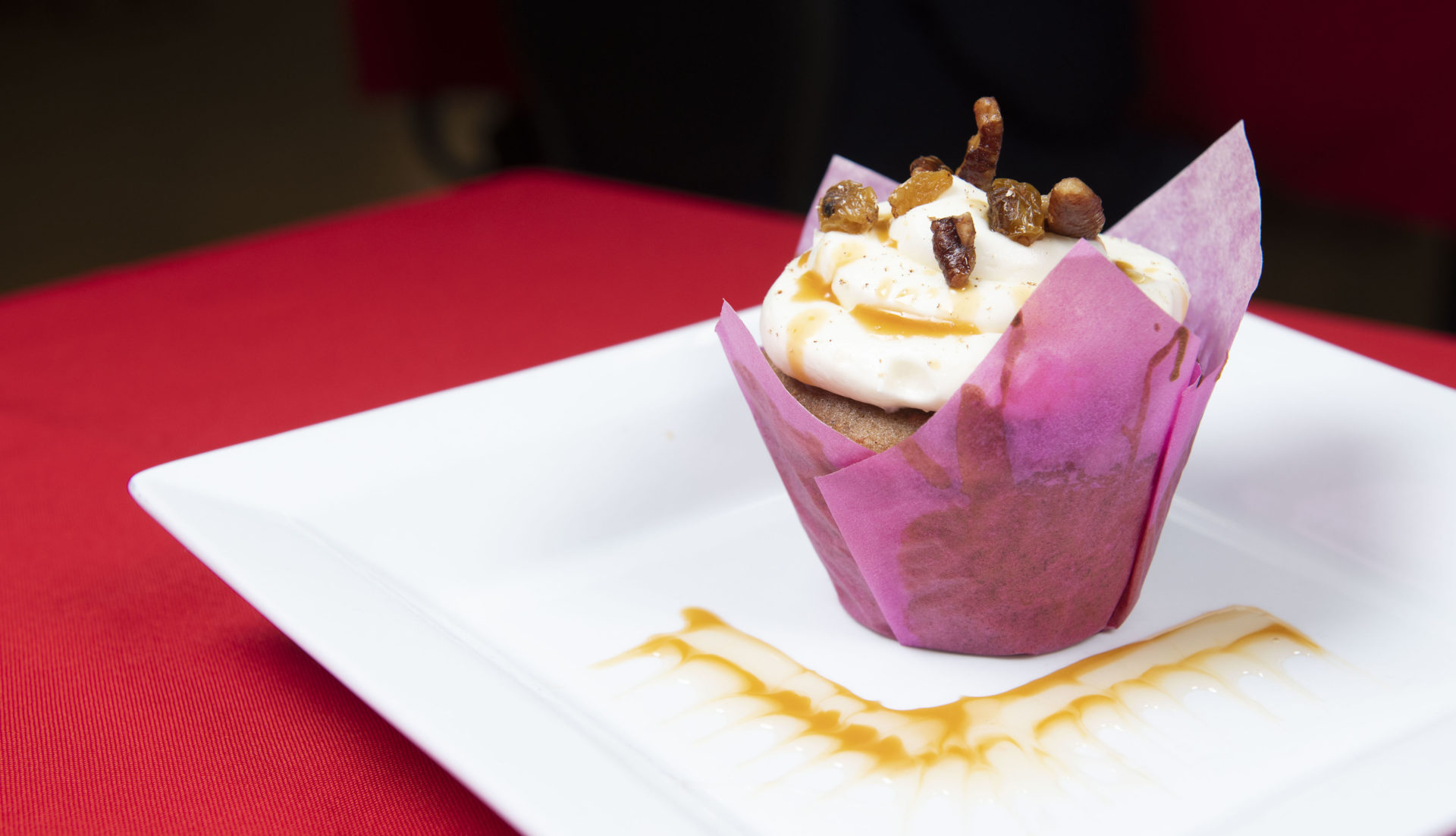 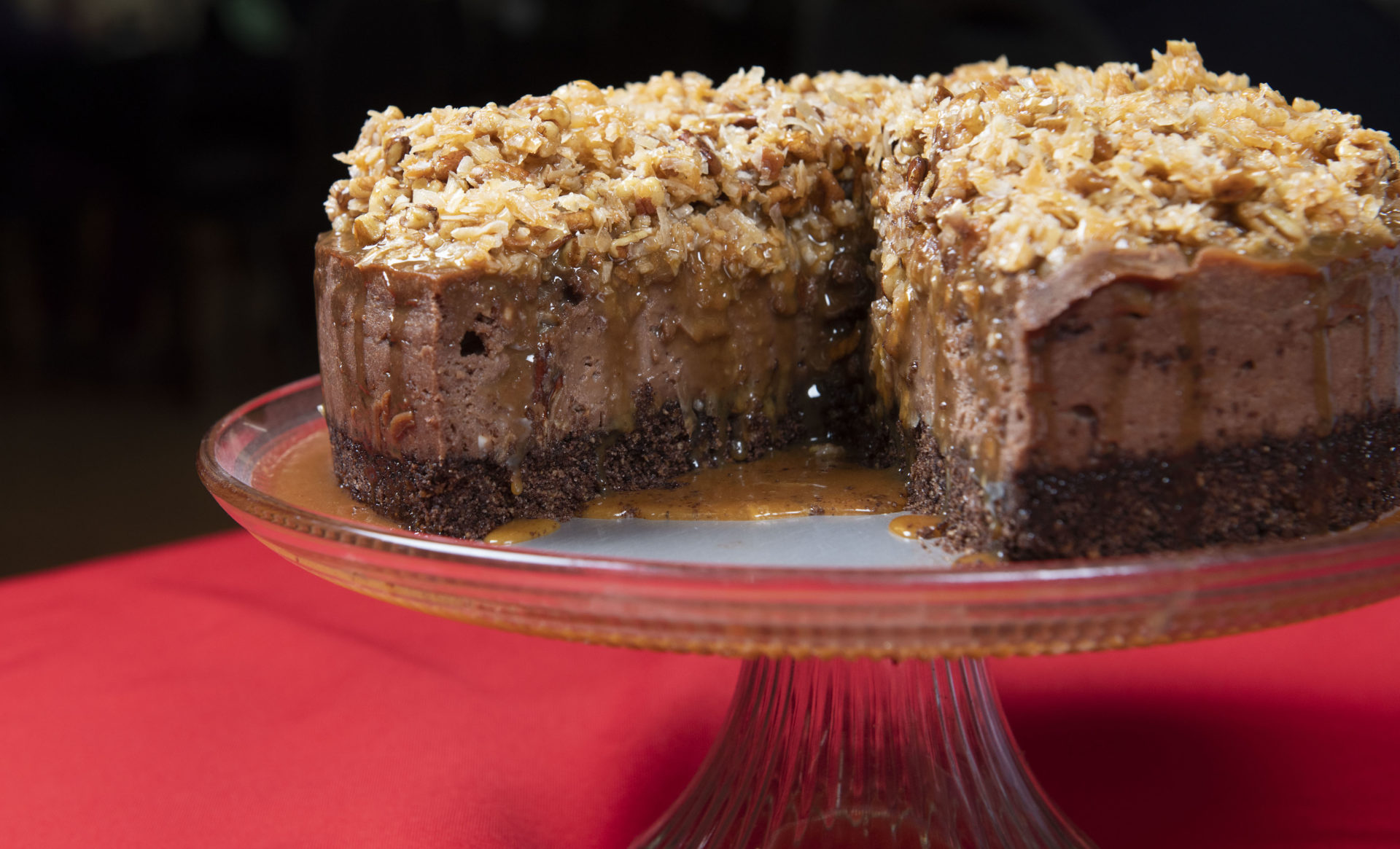 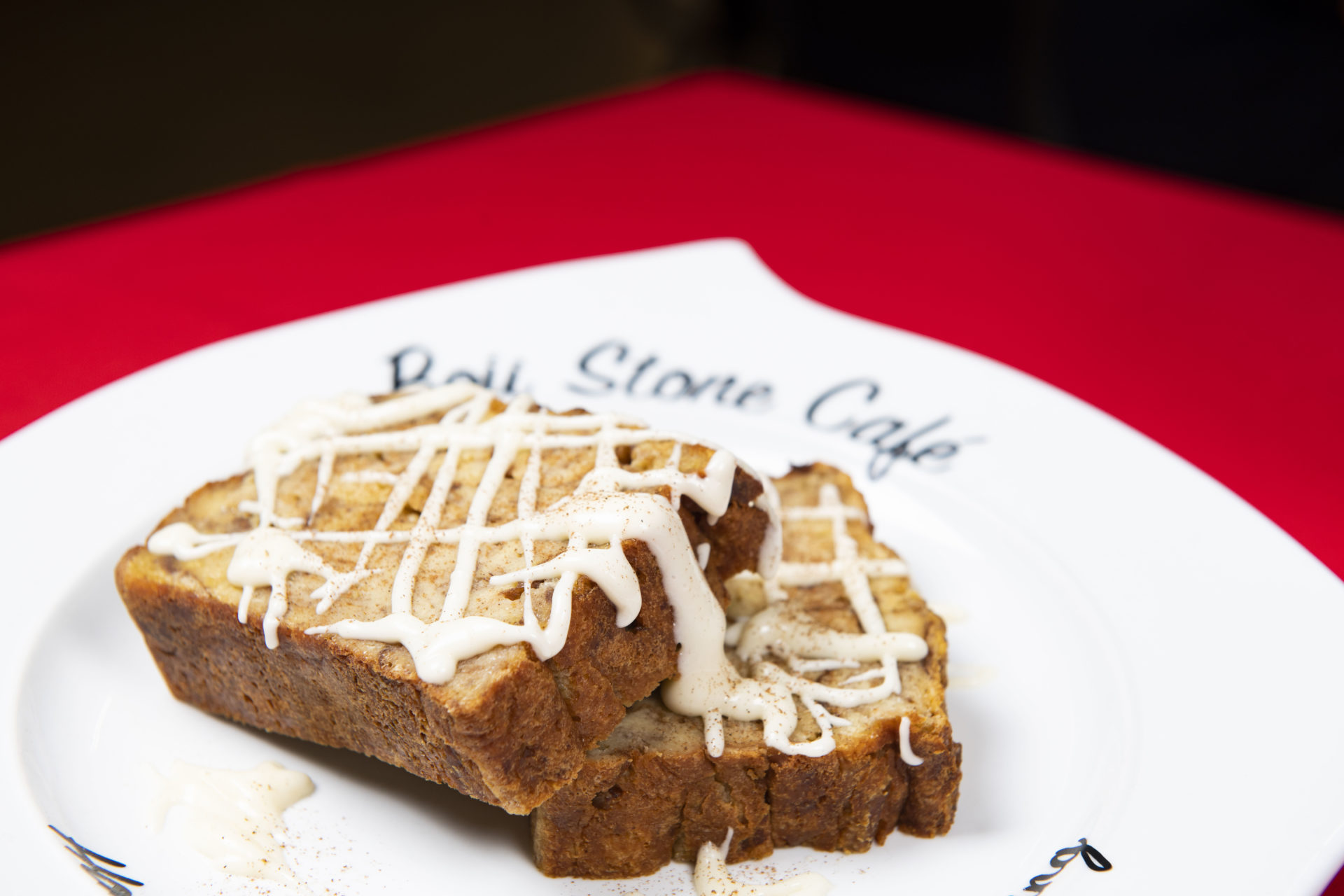 The Pimento Grilled Cheese combines hand-grated sharp white cheddar, mild cheddar, roasted red peppers, mayo and some additional secret seasonings on sourdough bread with candied bacon — an ubiquitous element of many of the restaurant’s most popular dishes. Lindsay’s favorite sandwich is best enjoyed alongside a bowl of her tomato soup.

One section of the menu is heartier fare than you might expect for a coffee shop: pasta. The Cajun Chicken Pasta pays homage to the Kepners’ favorite vacation spot, New Orleans. Seasonal specials round out the list of entrees, including the Ahi Tuna Salad Sandwich and Lent-favorite, Salmon BLT. Add a bowl of chili, corn and potato chowder or beef barley soup and you’re well on your way to being a satisfied diner.

If you managed to save room for dessert, you’re rewarded with more choices, all of them homemade. Alongside the muffins and scones one might expect to find in a downtown coffee shop is Lindsay’s specialty: a 14-ounce slice of cheesecake that typically comes in four different flavors each day. As many as a dozen ice creams are usually on hand, including unique flavors such as caramel apple and butter pumpkin pecan.

Like all restaurants during the past year, Boji Stone had to navigate being a part of peoples’ morning routines amid a pandemic. In addition to reducing available seating and spacing out open tables, Brent created a “red light-green light” system for customers to alert staff when they need service. Since last spring, delivery and takeout constitutes about half of Boji Stone’s business, but Brent doesn’t mind the shift. The cafe has made in-town deliveries since it opened and as long as diners are hungry he’s happy to provide the town meeting place.

“Chillicothe needed a place to get together and hang out,” Brent says. “Since the beginning of history people have met in coffee shops to discuss the world’s problems. We’re just continuing that tradition.”

Details: Open Tuesday through Friday from 7 a.m. to 3 p.m., Saturday from 9 a.m. to 3 p.m. Nonsmoking. Free Wi-Fi. Cash, checks and credit cards accepted. Located at 612 Washington St. in Chillicothe. Visit www.bojistonecafe.com, call 660-649-9939 or like the cafe on Facebook.