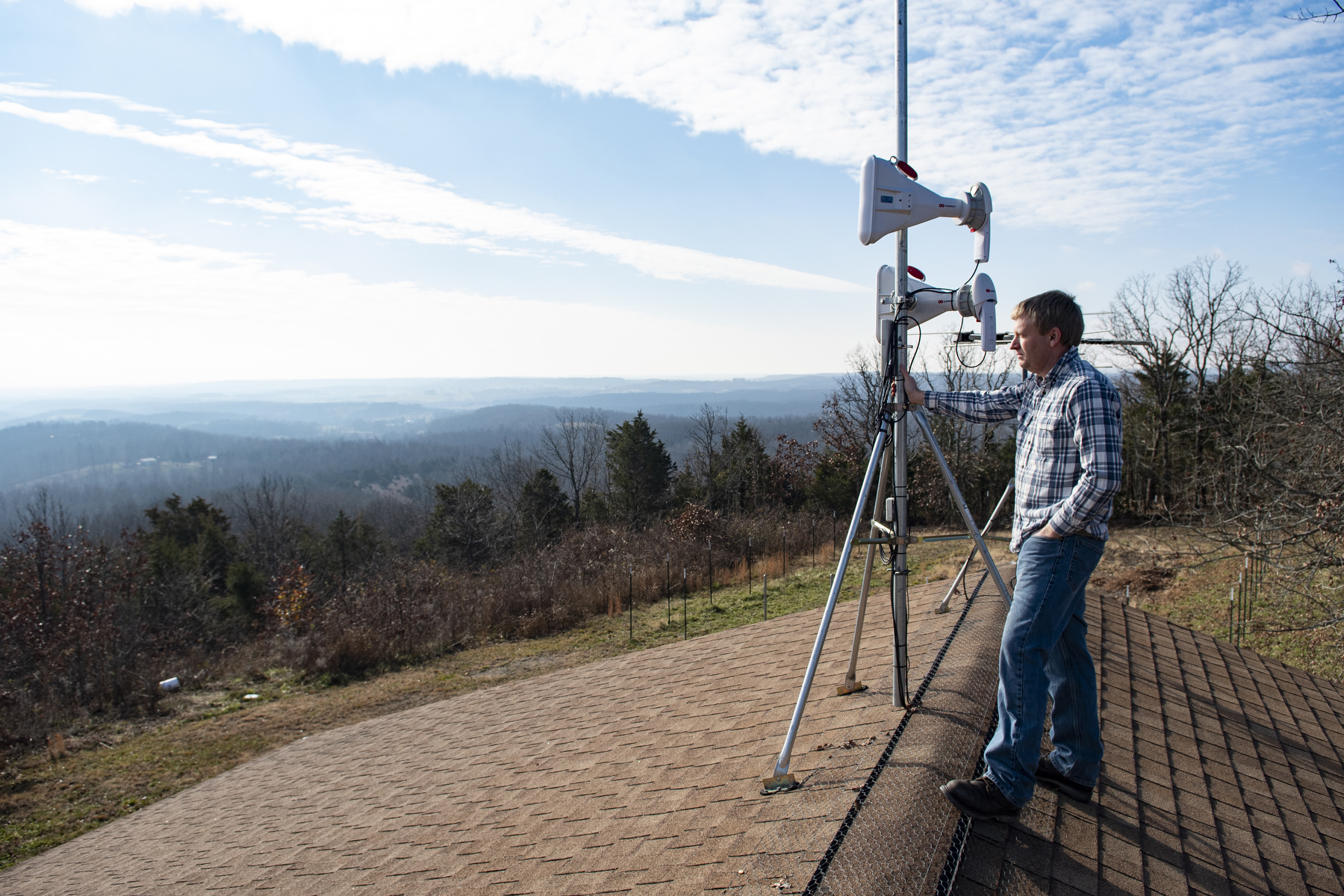 Like a lot of rural people, Andrew Kaiser found himself in need of high-speed internet service but living in an area without it. His computer repair business required constant downloads to upgrade software. Slow speeds made that frustrating.

“I grew up in the era of dial-up and early satellite providers,” Andrew relates. “In the cities, and even small towns, other people had broadband access at that point. It felt like there was this whole other world out there that I wasn’t able to fully participate in.”

He figured he had two choices: Move or build it himself. He chose the latter and today he and his neighbors have found a bridge that leads across the digital divide.

Andrew’s Ridgetop Networks serves a small cluster of rural homes in an area extending from Hartville to Mansfield. It uses line-of-sight antennas to relay a wireless signal along a series of ridges — hence the name — and down to homes and businesses. It’s all possible thanks to a fiber optic “middle mile” backbone hosted by Sho-Me Technologies, the telecommunications subsidiary owned by electric transmission cooperative Sho-Me Power.

“I never intended to turn it into a business,” Andrew admits. “It was for my own need. Really a lot of these businesses are started that way. There is such a need out there that people figure out how to do it themselves.”

Andrew started researching solutions and discovered others were using fixed wireless technology to connect in rural areas. He figured it might meet his needs as well.

“I spent a few years trying that equipment, making deals with neighbors to put up antennas on their houses and run cables around where it was needed to get a connection working,” says Andrew, a member of Laclede Electric Cooperative. “I spent years developing it.”

That early equipment wasn’t reliable, especially in thunderstorms. As the technology improved, so too did Andrew’s knowledge of grounding, lightning protection and electrical theory. 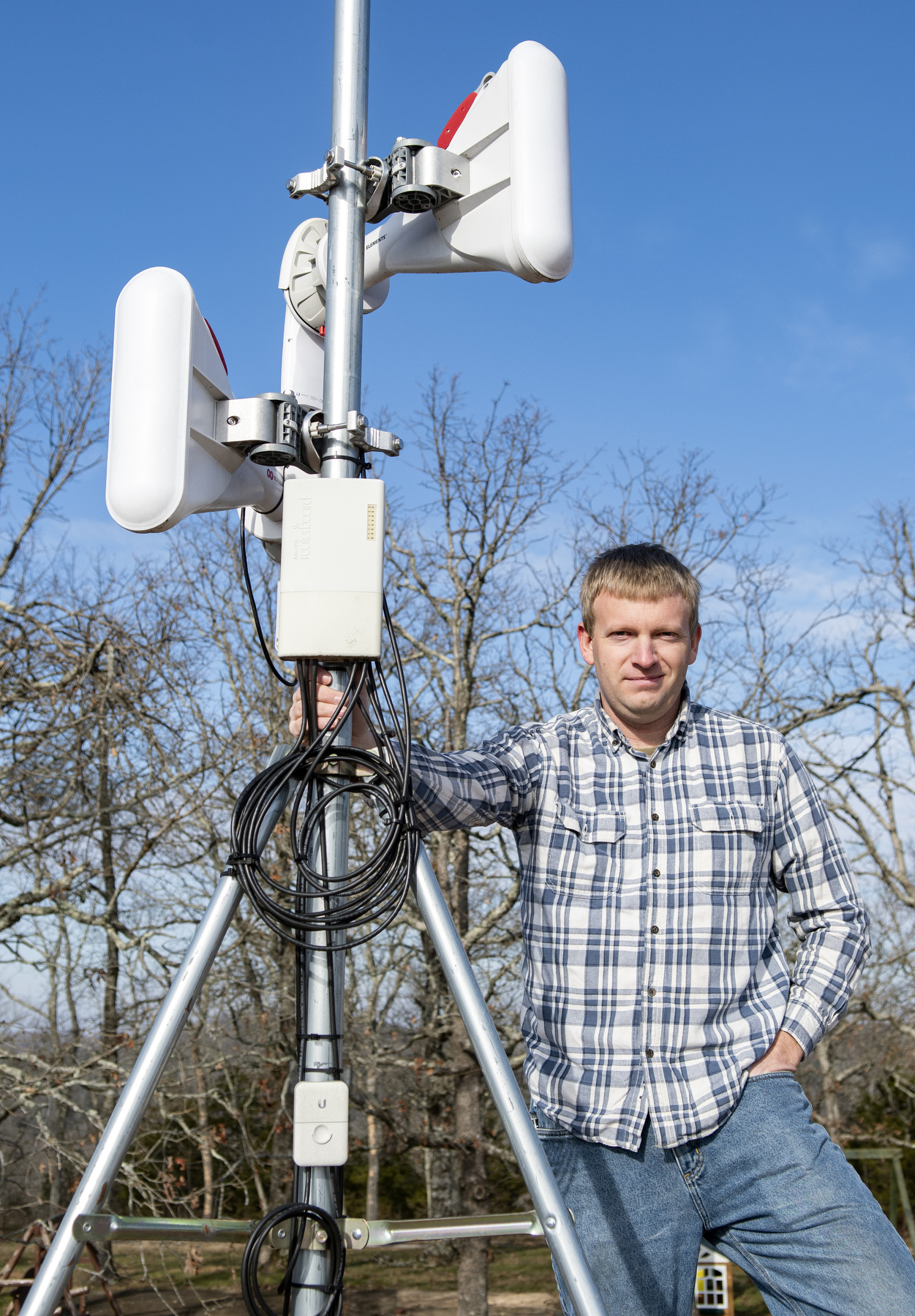 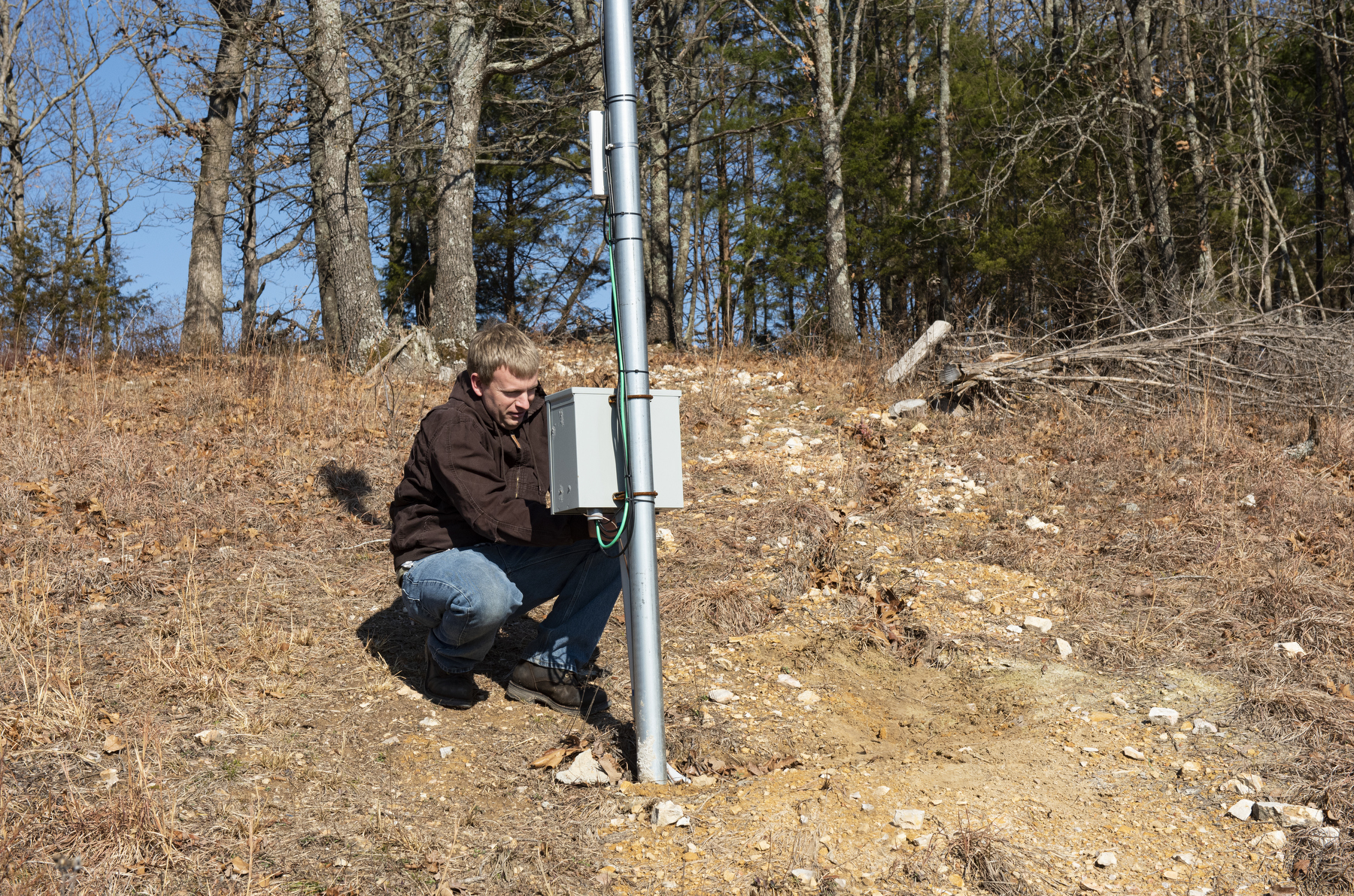 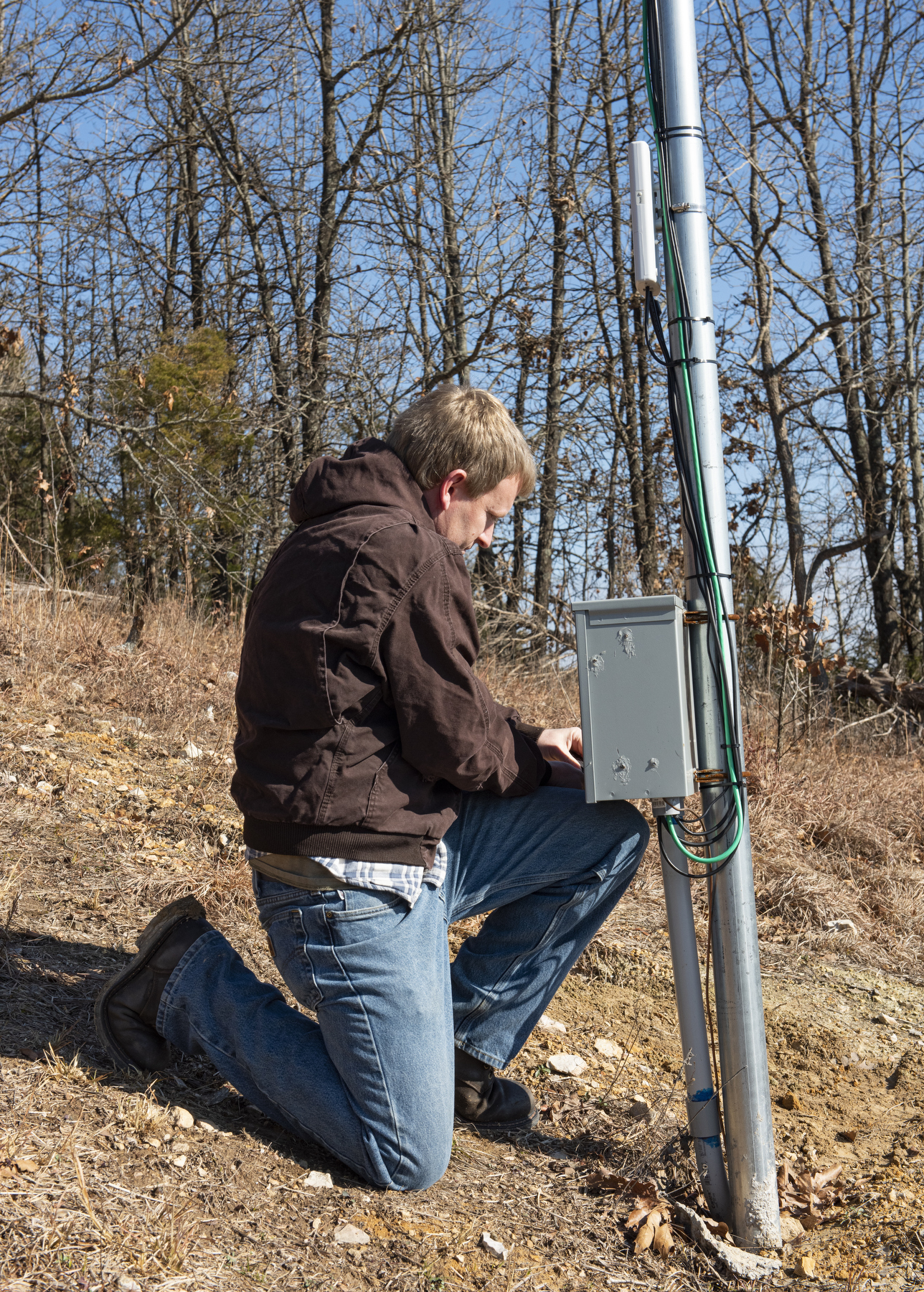 Ironically, about the time he got it all figured out he moved to Mansfield where he did have access to a broadband connection.

“I got it all tested, got it working and moved into town and no longer needed it myself, but my neighbors did. I slightly shifted what I was doing from it being designed to serve one person and opened it up to a number of people in a several-mile radius. I’ve just grown it from there.”

Initially the service just served a few miles around Mansfield, with Se-Ma-No Electric Cooperative providing power for the equipment. Over the years it grew slowly but steadily. In December 2020 Andrew installed antennas on one of the Hartville water towers. That allowed him to significantly increase the area he can now serve.

Wireless internet service providers, or WISPs, are common across rural areas says Sho-Me Technologies Senior Account Representative Becky Allen. “We’ve had neighborhoods contact us that want to serve just their neighborhood. People are finding ways to get what they need. Because it’s almost impossible to get by without the internet today.”

Sho-Me Technologies launched in 1997 when cell phones took off. In order to allow the influx of cell phones, the Federal Communications Commission auctioned the radio frequency then in use by electric utilities to communicate with their substations. The utilities had a choice: move to a different frequency or install fiber optic lines.

“Thankfully, our board decided fiber optics was the way to go,” Becky says. “At that time these areas were being completely overlooked. We are able to offer something to level that playing field a little bit and give them the service they needed to keep up with the rest of the world.”

With extra capacity on its fiber backbone, Sho-Me Technologies helped connect rural schools, banks, medical clinics and other businesses to broadband. It also made possible WISPs like Ridgetop Networks that now serve some rural areas. Those companies are taking Sho-Me’s middle mile network to the end users.

Andrew’s efforts have allowed many people to live in rural Missouri while still enjoying the high-speed internet access once only available to city dwellers.

“In my early days one of my first customers was John Deakyne whose job had allowed him to move from the east coast into southern Missouri,” Andrew says. “They allowed him to move with the stipulation that he maintain an internet connection in order to work remotely. He was not able to obtain that at his home. He would have to take a 30-minute drive one way to go to a town that had a good internet connection for him to work.”

That access ended when his daughter moved to Denver. Fortunately Andrew was able to provide a connection at the man’s home, prompting this testimonial from John: “Your service changed my life.”

Demand for Ridgetop Networks service increased dramatically due to COVID-19 with parents working from home and their kids trying to get online for virtual learning.

“I hear from my customers that their house is the gathering spot for their kids’ friends to come over and do their homework,” Andrew says, “because many of their friends do not have good internet connections at home.”

WISPs such as Ridgetop Networks can offer a broadband solution for rural residents in unserved areas, Andrew says, but only if their owners are prepared to put in the long hours necessary to keep it operating. “It is not for somebody that wants a 9-to-5 job with weekends off. There’s plenty of times I’ve put in a 16- or 20-hour day and an hour or two after I crawl into bed, I get a notification that something has gone wrong and I am back up dealing with it.”

Sho-Me Technologies is ready to help. “It’s exciting and it is very rewarding to think that we play a part in helping everyone get access to the internet,” Becky says “The real rock stars are the people like Andrew. It is gratifying to see that we can help make this happen and help the people in our home area of the Ozarks.”