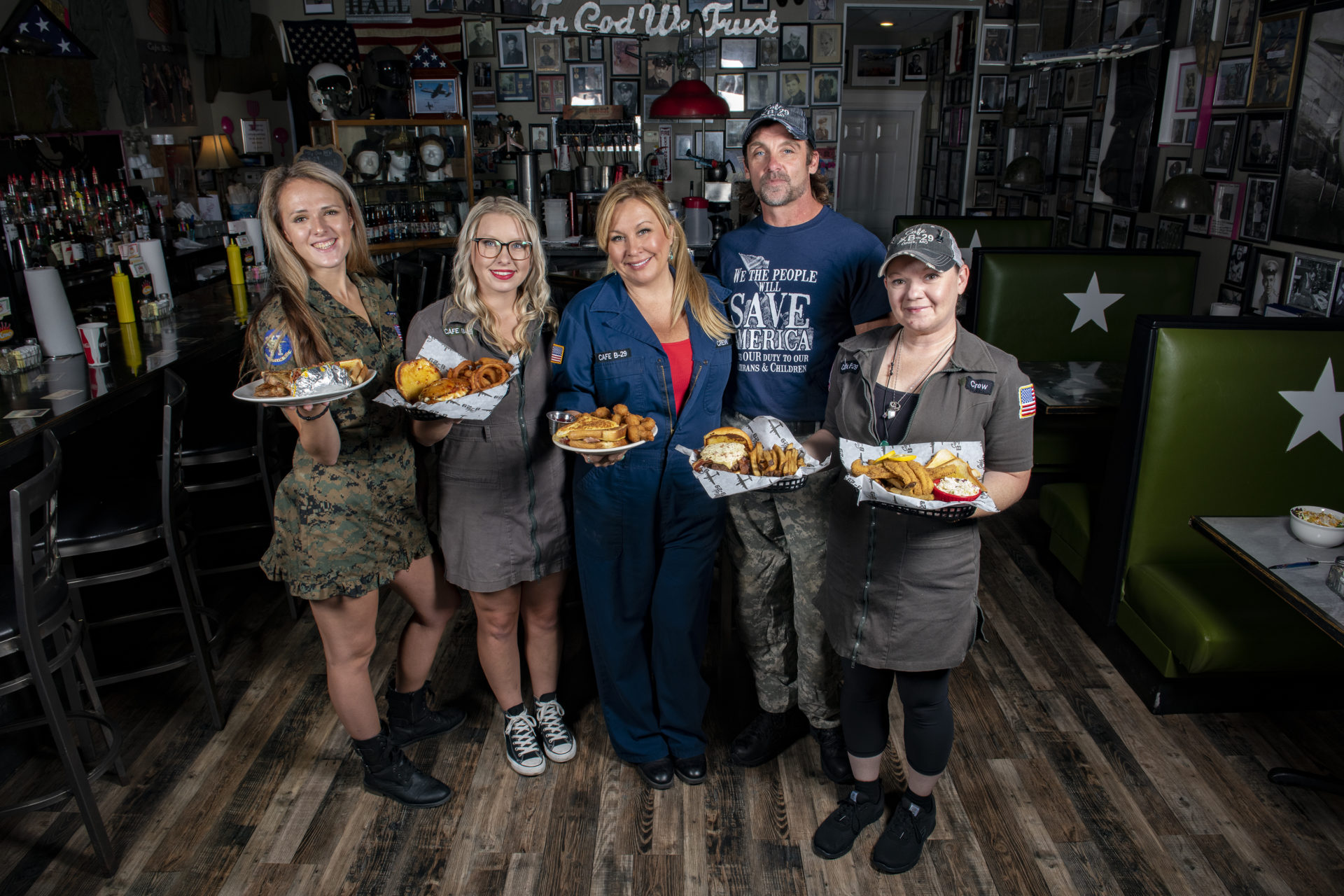 You can tell there’s something different about Cafe B-29 before you walk in the door. It’s not every restaurant where ammo boxes double as flower planters, helmets are refashioned as booth lights and one of two 6-foot-tall cluster bombs serve as a guest book. But the military furnishings and menu names are more than simply decoration and theme. For owners Chaz Koeppen, fiancee, Matt Gann, and daughter, Samantha Johns, it was important not just to serve their community good food, but also show appreciation for those who serve.

“We celebrate the American spirit because the people who join our military services are the heart and soul of this country,” Chaz says. “They’re the ones who make it great.”

“And they give us the chance to open a cafe,” adds Matt. “Without many freedoms we wouldn’t be able to do this, and it was important for us to show that.”

Opening the restaurant may have been the family’s dream, but its success is a story of the community’s support for their service members. When Cafe B-29 — named after the B-29 Superfortress aircraft — opened in 2017, the owners decorated the walls with a few shadow boxes of family military memorabilia and photos. Soon, locals began bringing in their own photos of family members who had served, newspaper clippings, pieces of B-29s and even uniforms to adorn the walls. Frequently, they’d also bring a veteran family member in tow. Chaz and the waitstaff crew, decked out in period uniform, make it a point to announce diners who are World War II veterans who always receive a standing ovation and rarely have to pay for a meal. About 70 WWII vets have visited the cafe over the years and many of them have become weekly regulars. Other frequent visitors include first responders and law enforcement officers.

Binding together the community that’s sprung up around the restaurant is a menu rooted in 1940s, all-American diner food with some inspiration from family recipes, such as Chaz’s grandmother’s bread pudding on the dessert menu or Matt’s mother’s jalapeno popper dip, which shows up frequently on the menu.

“We wanted what people were comfortable ordering, but knew it would be important to make signature dishes,” Matt says. “We wanted to put our own stamp on it.”

It doesn’t get much more all-American than burgers, and Cafe B-29 has six options including the classic toppings on a half-pound Bumstead’s Burger Basket to the B-29 Brat Burger, which features a bratwurst patty infused with bacon and pepper jack cheese. The local favorite is the Jalapeno Popper Burger featuring pepper jack cheese, two slices of smoked bacon and a grilled scoop of the jalapeno popper dip on a half-pound of hand-pattied ground beef. Pearl Harbor’s Ultimate Chicken Sandwich ups the heat and the sweet found in the burger with a spicy and lightly breaded chicken breast topped with grilled smoked ham and the dip. To this are added two caramelized pineapple rings and a sweet chile sauce, known as Rosie sauce after Rosie the Riveter.

Another throwback to the diner era is the K-Ration Bologna Sandwich, which Chaz says has become an obsession for some of B-29’s regulars. Sandwiches and burgers come with a choice of hand-cut fries, Italian-cut green beans with bacon, potato salad or coleslaw. Tater tots, onion rings, salads and fried mushrooms also are available for an upcharge. Just about every side works well to take care of any leftover jalapeno popper dip. 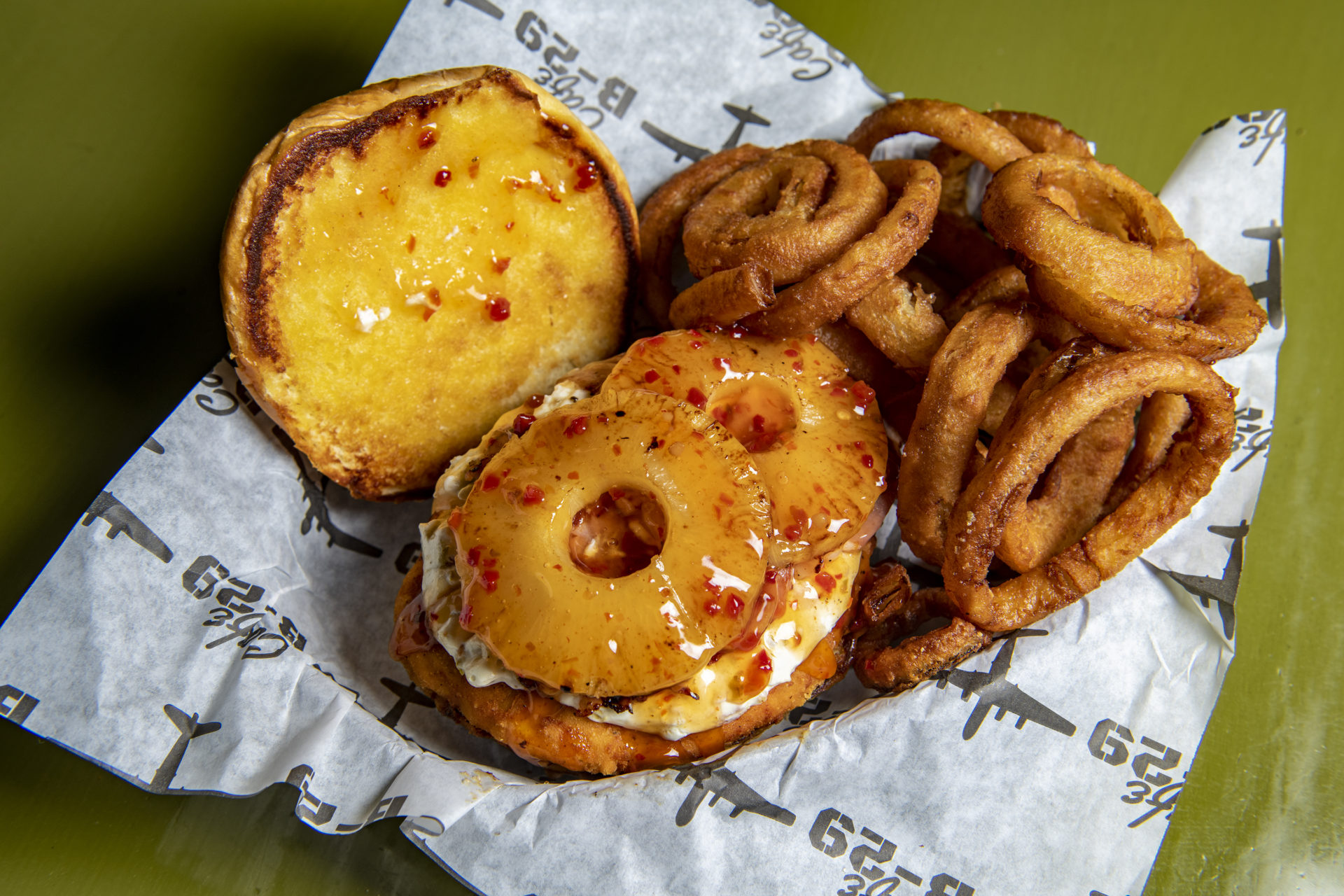 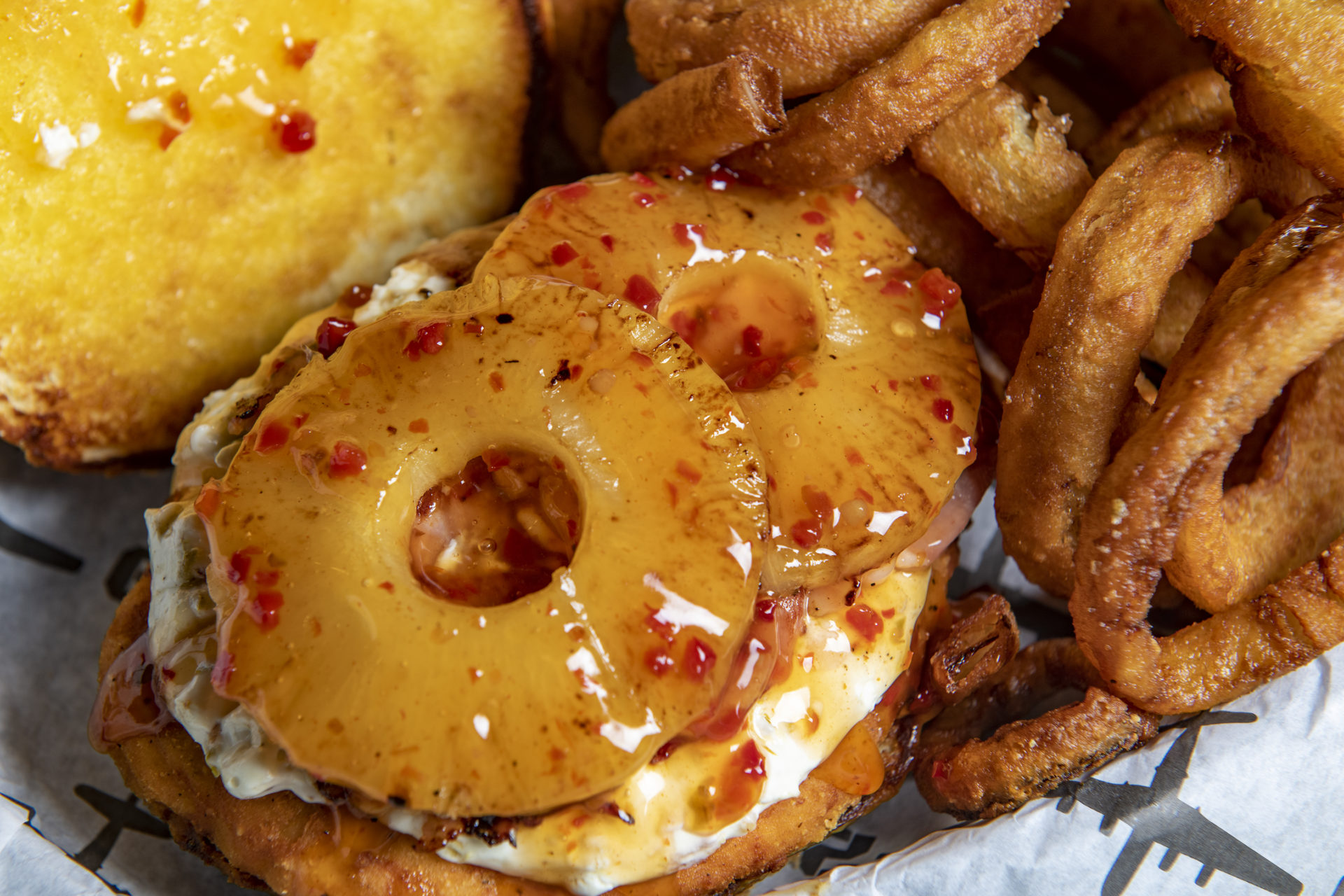 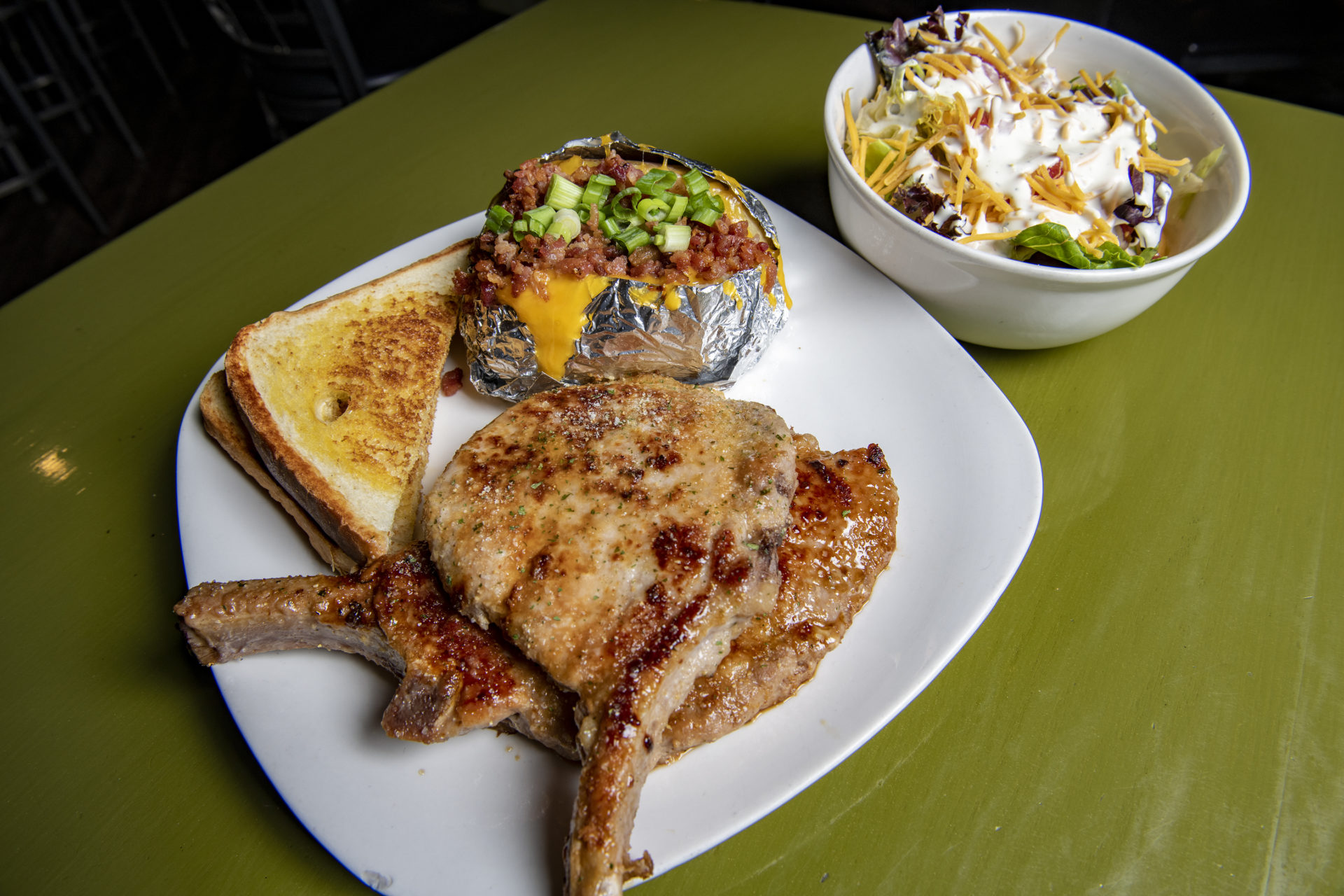 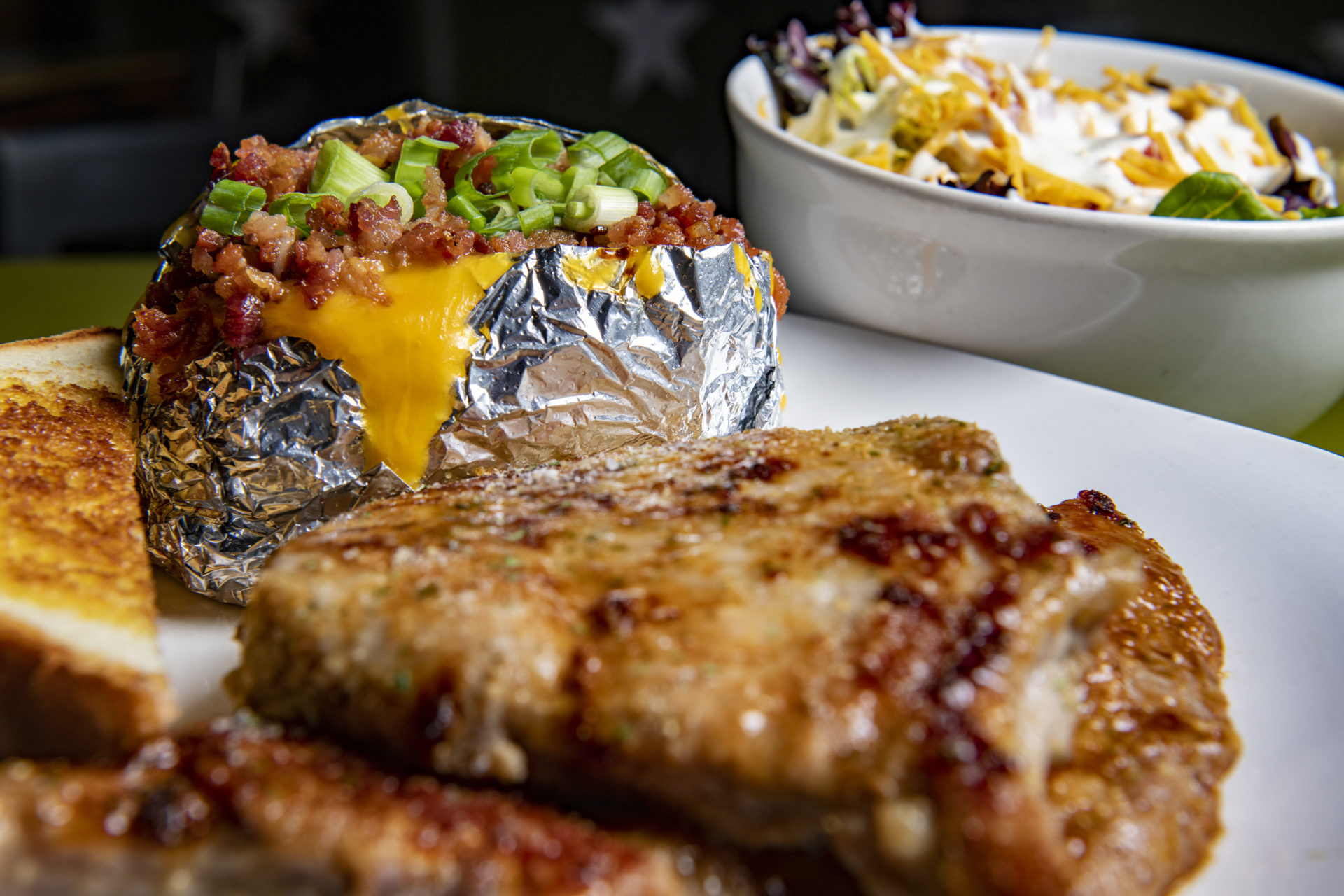 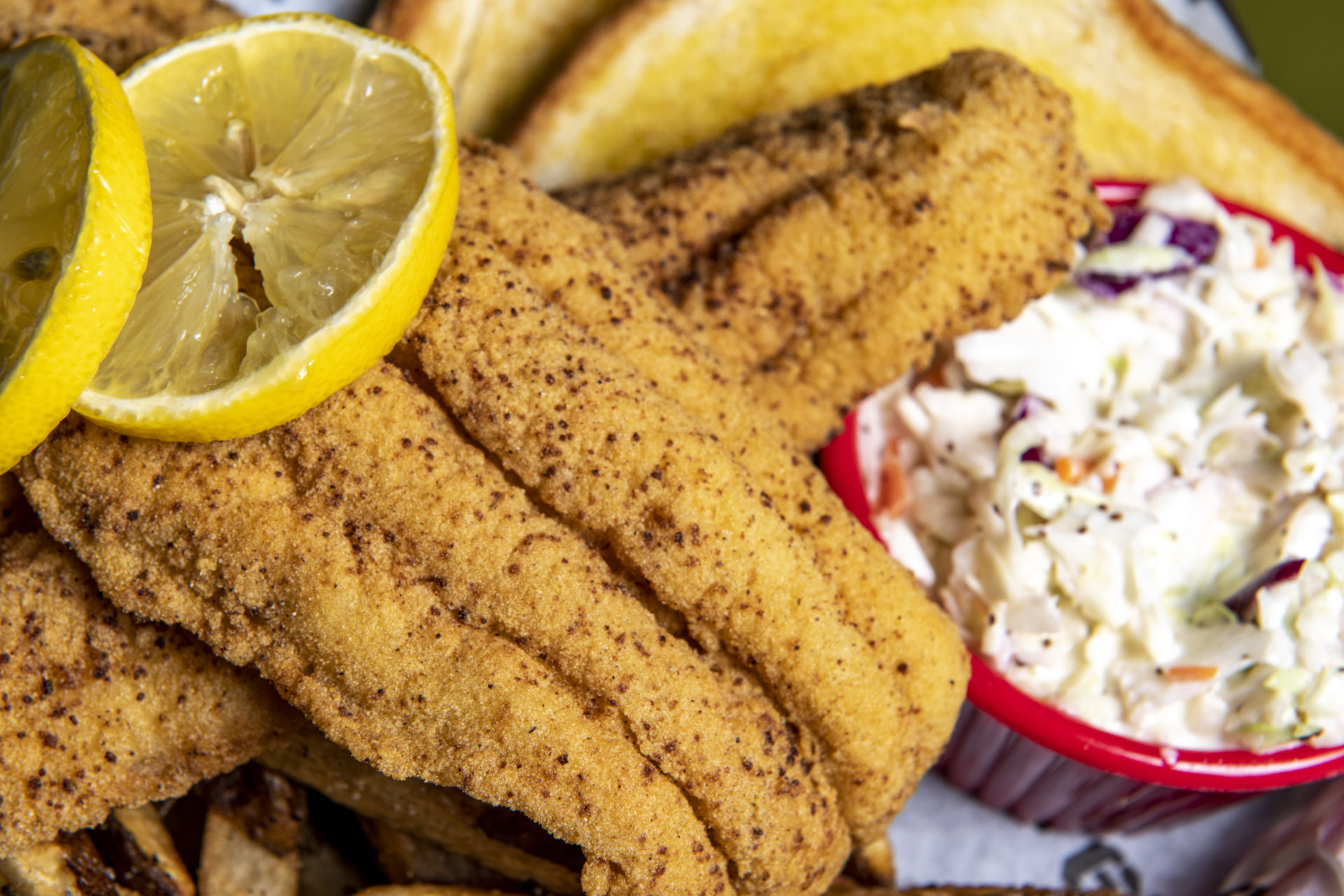 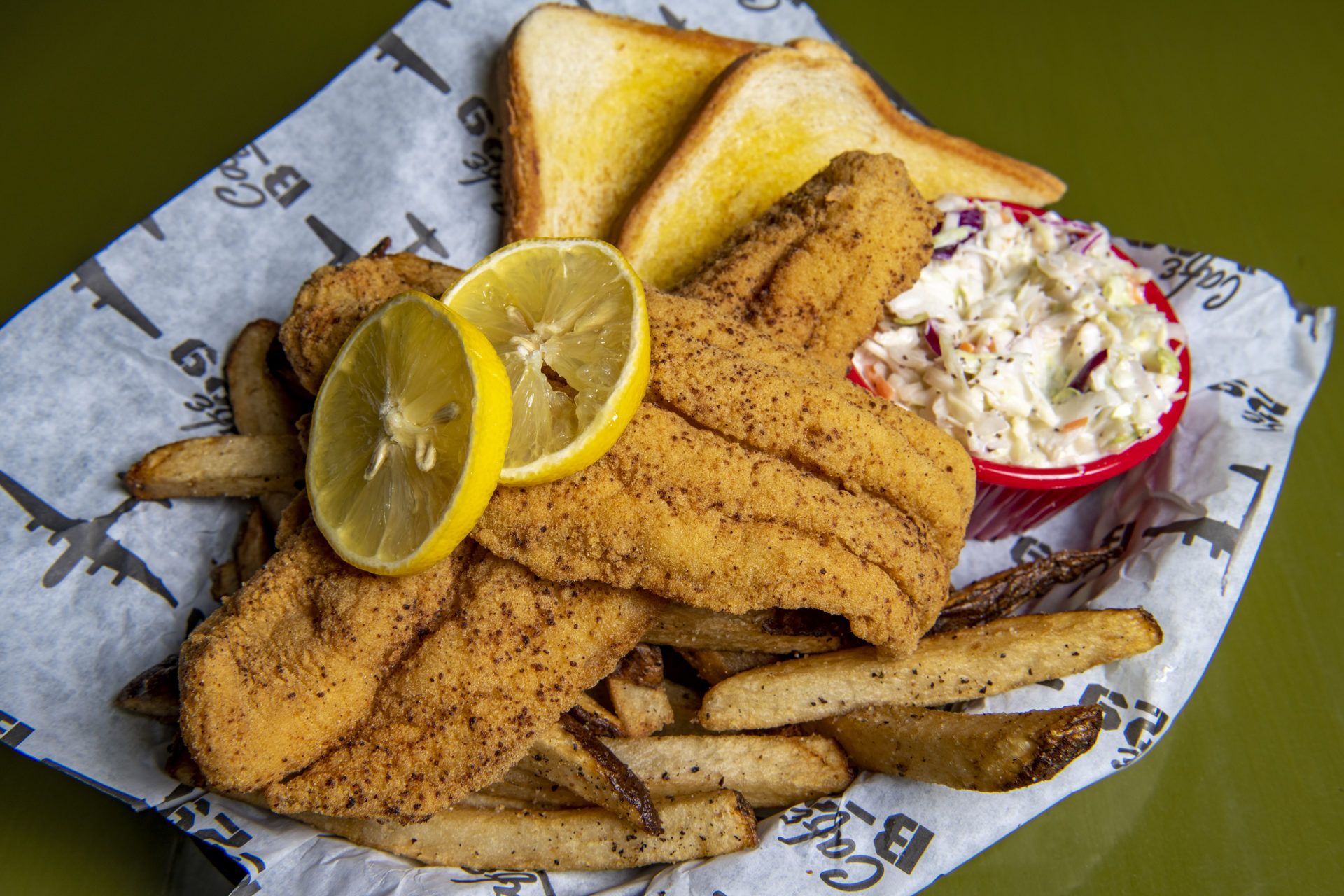 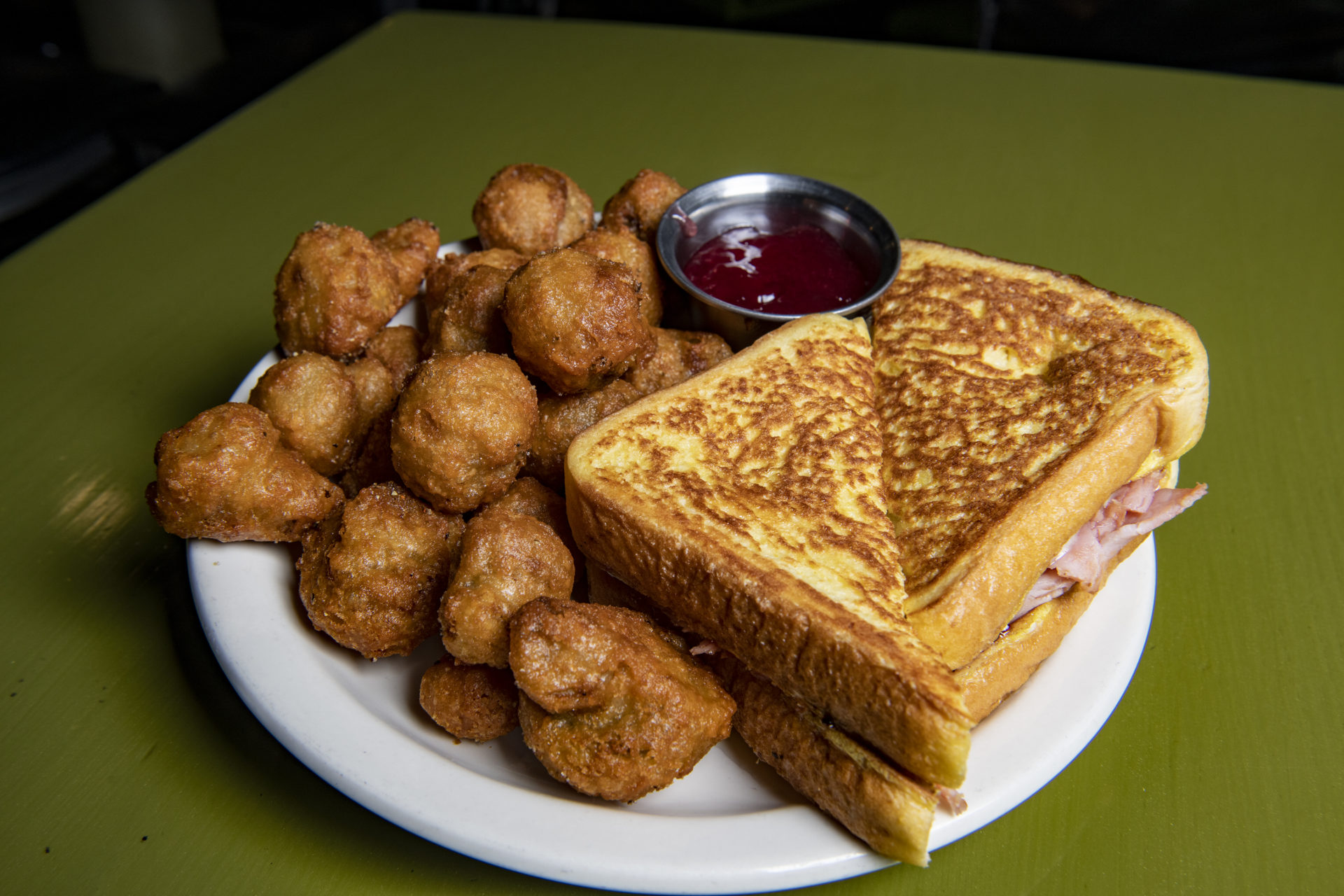 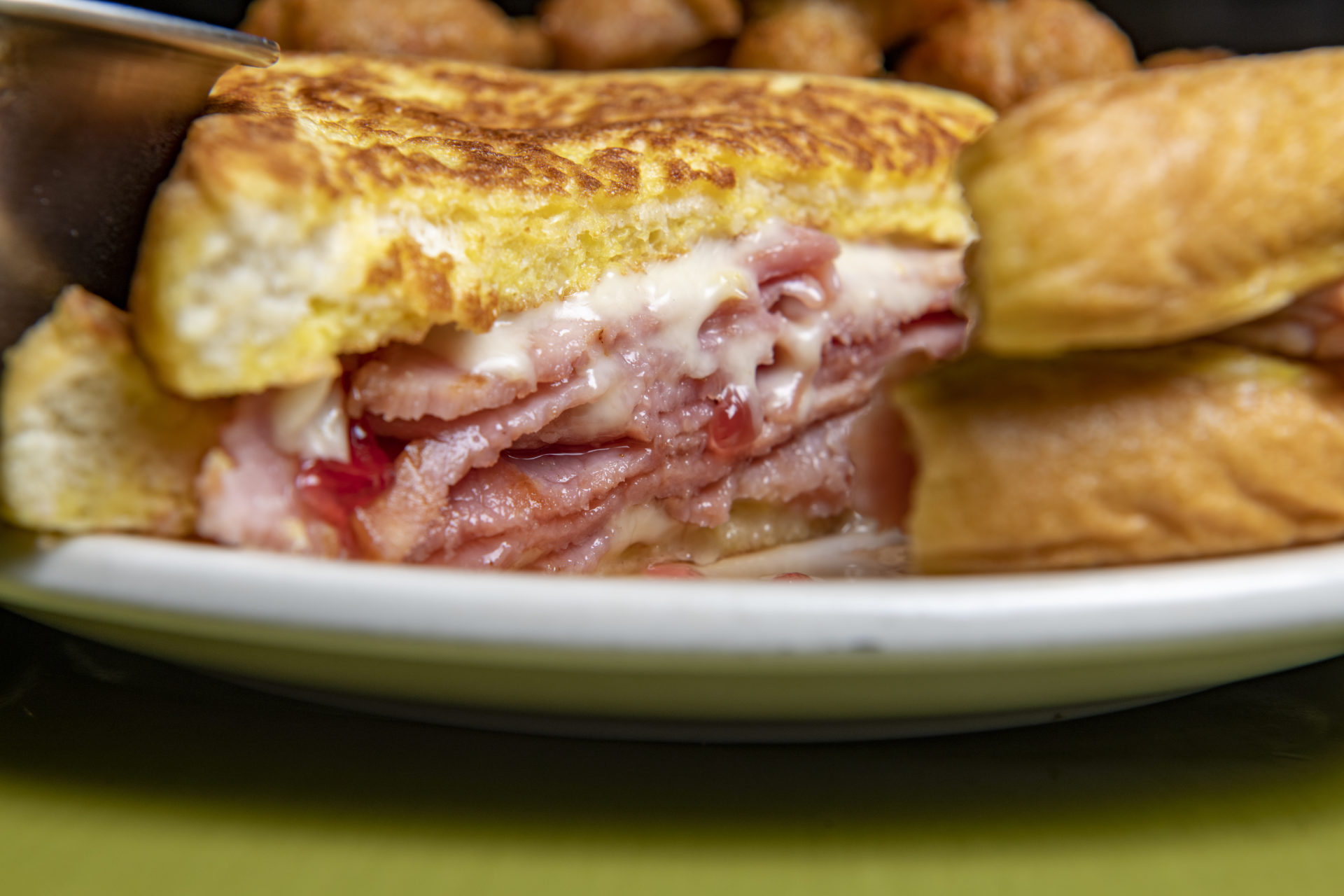 “It doesn’t go to waste,” Matt says. “Whatever drips off the burger, everybody uses it to dip their fries in.”

Even though the restaurant only serves lunch and dinner, breakfast aficionados can still get their fix with MacArthur’s Monte Cristo. The creation of Chaz’s former business partner, Myka Morgan, French Texas toast is topped with a heaping pile of shaved ham, Swiss cheese and a touch of seedless raspberry jam sourced from Amish farms in northern Missouri. Unlike a typical Monte Cristo, the sandwich is not deep-fried nor given a shower of powdered sugar, but it does come with a side of the raspberry jam, if your sweet tooth so desires.

“You want the ham to come through,” Matt says. “There’s some sweetness in the bread already and when you deep-fry that it’s too sweet, almost like a dessert. The Swiss cheese has a little tart to it, and we want all those flavors to come together with the sauce.”

One dinner dish Chaz and Matt are particularly proud of is one of B-29’s simplest: Charlie-Alpha-Tango-Foxtrot-India-Sierra-Hotel or, if you don’t speak IRSA, catfish. Two massive fillets fried in a blend of cornmeal and secret herbs and spices top a half-pound of fries and are served with lemon, Texas toast, tartar sauce and slaw.

“It took us about six months to figure out the catfish, but we finally found the perfect seasoning combination,” Chaz says. “Ours has a little bit more of a bite when it comes to the herbs and spices.”

Weekly specials round out the menu. If two slabs of catfish simply aren’t enough for your appetite, on Thursdays Cafe B-29 offers an all-you-can-eat special. The wall-of-fame record, not likely to be broken, is 13 pieces of catfish. Meatloaf, ham and beans and beef stroganoff are just a few of the specials that are made from scratch and sure to sell out once the dinner crowd arrives.

As the restaurant’s popularity and message have caught on in the Ozarks, Chaz says the B-29 crew has made it a point to give back wherever they can. When the restaurant was briefly shut down at the beginning of the COVID-19 pandemic, B-29 sought out veterans with no means of getting groceries and no family to help support them and made sure they had something home cooked to eat. The restaurant regularly donates to organizations such as Honor Flight of the Ozarks and Woof for Vets and holds fundraisers for locals in need of help paying medical bills. All the while it serves as part eatery, part museum and part torchbearer for the spirit of America’s heroes in uniform.

“That’s the thing about this cafe: Even if people aren’t military or they are younger kids, people are looking at the planes or talking and they’re not on the phones the whole time,” Matt says. “It’s been really neat to see people engage with it.”