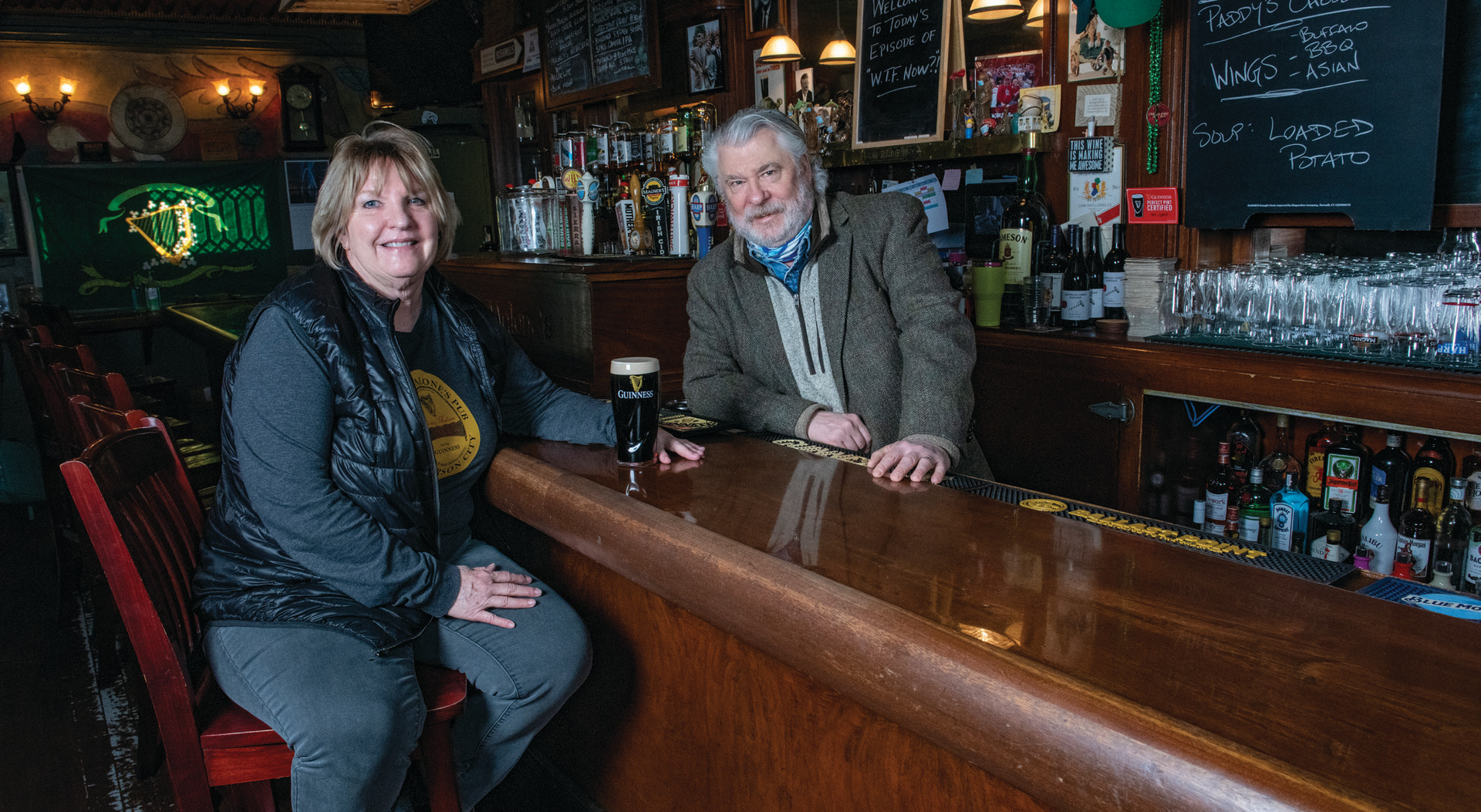 It’s no coincidence that the Irish word for pub, “tig,” also means house or home. Entering a local pub, you’re wrapped in a subtle but singular sense of place. There’s no fuss or formality here; take a seat and make yourself comfortable. Time slows and the patina of history settles over you. Just such a homey atmosphere drew in both of Paddy Malone’s current owners, Allen and Marilee Tatman. With Irish heritage on both sides of his family, Allen named the pub after his maternal great-grandfather and outside the entrance you’ll be greeted with the sign which reads “Tig Padraig Maoileoin,” or the house of Paddy Malone.

In keeping with the storytelling traditions of Ireland, the tale of Paddy Malone’s Irish Pub is both animated and compelling. It winds all the way back to the 1860s, when one of the oldest continuously operated taverns in Missouri had its beginnings. This watering hole has gone by numerous names including, prior to Prohibition, the “First Chance, Last Chance” where it was the first place to get a drink coming from dry Callaway County or the last chance to get one before you left wet Cole County. The building itself made history in 2014 when it was added to the National Registry of Historic Places. Paddy Malone’s builds on that heritage, offering a genuine Irish pub experience replete with delicious traditional pub food, colorful regulars, an exceptional selection of Irish beer and whiskey and live Irish music performances.

When the pub came up for sale in 2000, Allen was working as a historian while Marilee was a nurse at Capital Region Medical Center. Allen was a regular customer of the tavern by that time and wanted to purchase the building. Instead, he was offered a lease with a first right of refusal on the property when the lease was up. “A bar is a place where you get a drink, but a pub is a community,” Allen says. “People come here for the experience.”

Marilee found camaraderie at Paddy’s, and as her relationship grew with the regulars it also grew with Allen. With his gift of gab and early restaurant roots combined with her management skill, their collaboration provided a strong foundation for the restaurant’s new incarnation.

That experience is comprised of the key ingredients of any genuine Irish pub: drink, food and music. With five Irish brews on tap and a large selection of Irish whiskeys and Scotch whiskys, the bar is truly distinctive.

“When customers come in, they say they can’t find Kilkenny anywhere else,” Marilee adds.

Paddy Malone’s takes pride in serving the best draught Guinness you can get stateside. Firsthand research conducted by Allen and Marilee during a trip to Ireland in 2004 led them to the formula. They discovered that it is primarily the ratios of gaseous carbonation which creates the brew’s creamy character, so Paddy Malone’s bears an extra expense to bring customers a pint as close to the original as possible. That could explain why in the heart of Budweiser country Guinness is their No. 1 selling beer. 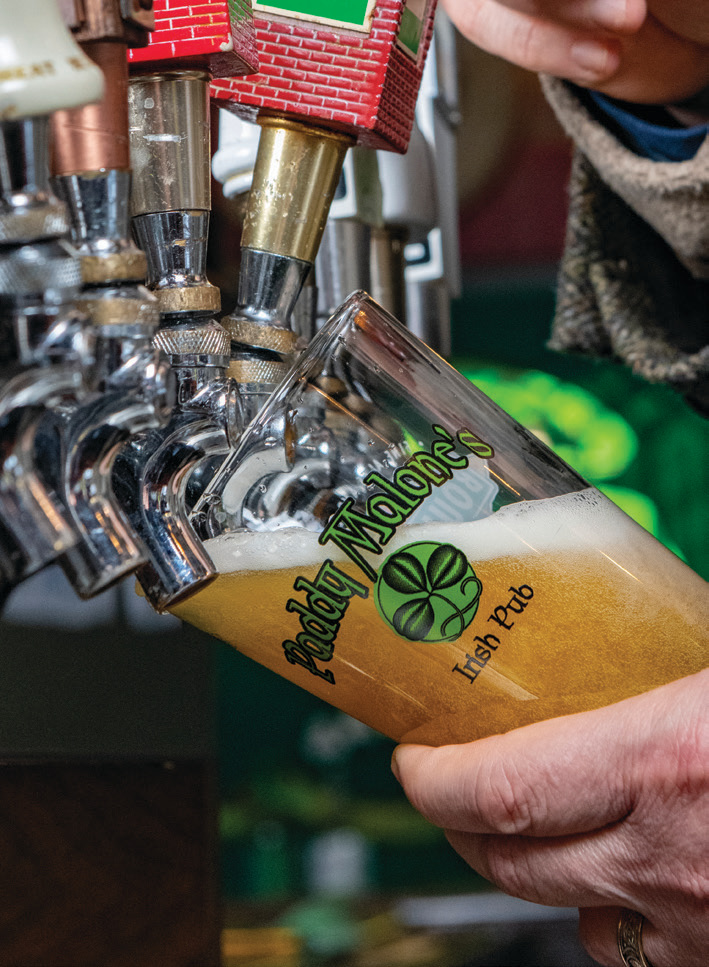 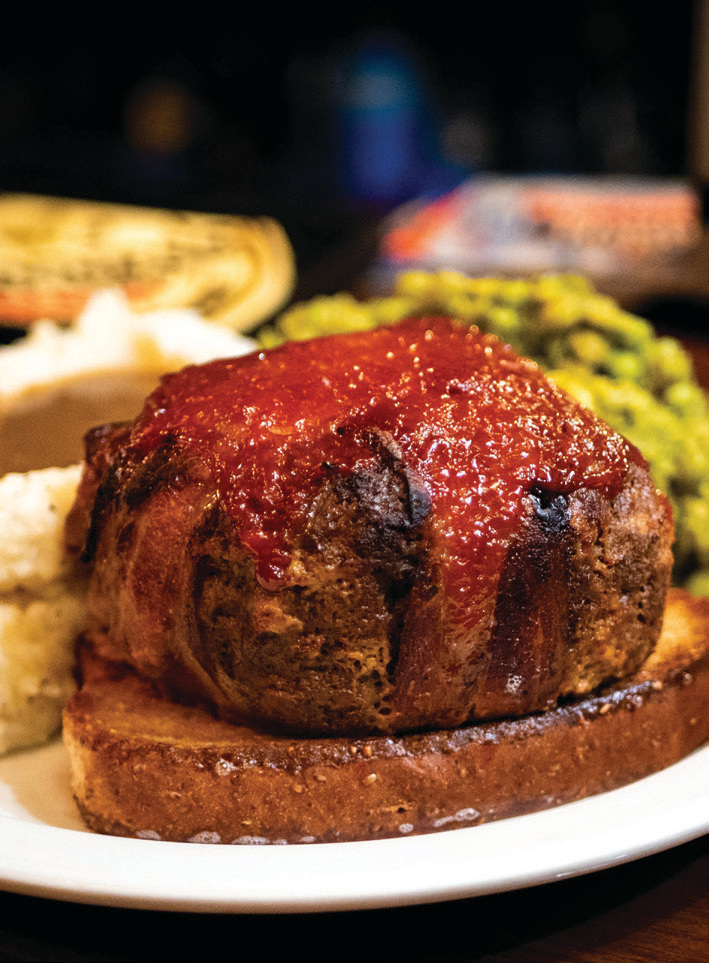 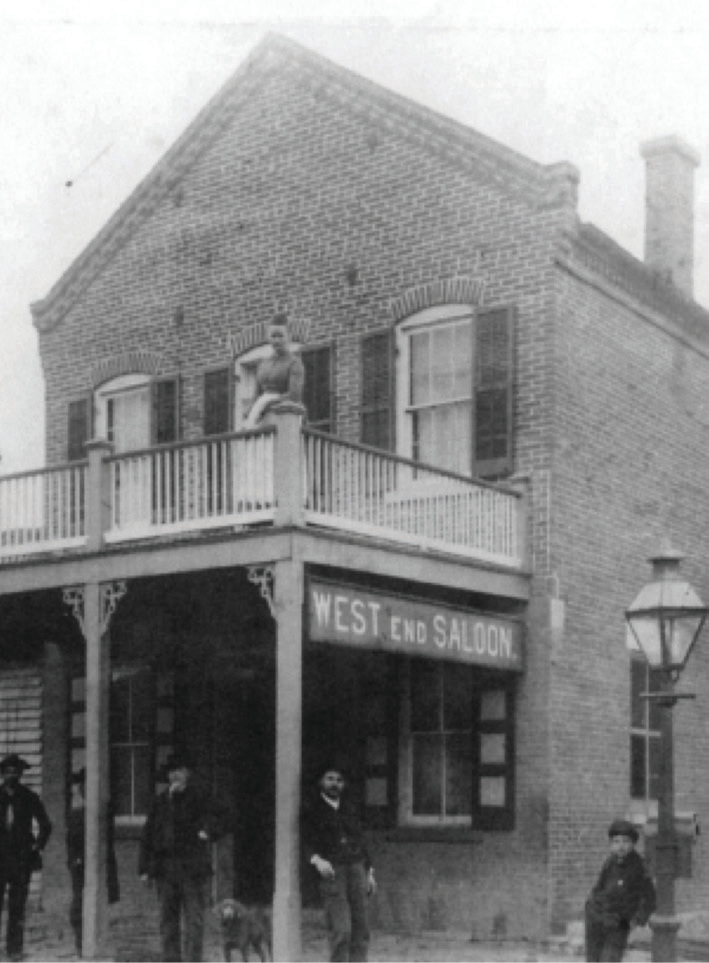 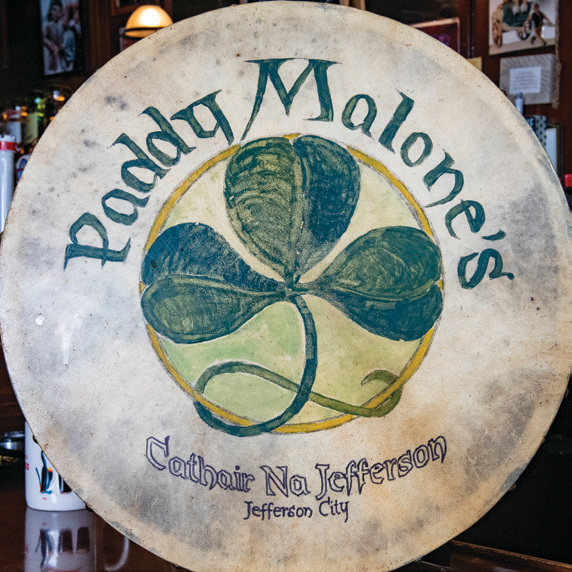 The meals at Paddy’s are equally integral to the pub experience. Allen’s uncle Tommy left his position as a sous chef at a Memphis country club 20 years ago to shape the menu and establish the kitchen of the pub. Tommy is still in the kitchen bringing country club standards to the pub’s traditional fare. This entails making orders from scratch: pounding pork tenderloins, dredging, battering and frying them to order, along with onion rings. Seven special-ty burgers in addition to traditional preparations are all made from fresh ground beef. The signature fish and chips features a thick loin of fresh Pacific Cod. Bangers and Mash is also a must, though here there is a Midwestern twist on the classic using bratwurst and sauerkraut. Side orders are offered a la carte and feature another Irish staple: colcannon mashers which adds cabbage to the potato and is seasoned with garlic and horseradish. Diners are welcome to enjoy their meals in the bar, dining room or patio area or opt for takeout.

No self-respecting Irish pub could operate without live music. Paddy Malone’s has delivered in spades over the years, bringing internationally renowned Gaelic Storm on multiple occasions, the Fuchsia Band from County Cork and other native Irish performers with whom the Tatmans made fast friends during some of their 23 trips to Ireland. More recently, a long-standing local Irish music troupe from Columbia performed one Saturday a month until the pandemic disrupted their performance schedule.

On occasion, Allen himself will carry on the musical tradition set by his cousin Donald Patrick Malone and serenade customers with his own resounding voice. He and Marilee maintain close connection with Ireland through a tour business, Wylde Irish Tours, they’ve established as an outgrowth of the pub. Small, private group tours can be orchestrated upon request. But you don’t have to travel to Ireland to experience some of its charms. The pub exudes Old-World character.

“One of the things about this place is that everything is organic,” Allen says. “There’s a story behind every piece that’s hanging on this wall.”

If the walls could talk, they would surely spin some lively tales. Steve Twigger of Gaelic Storm is a musician and artist from Coventry, England. He told the Tatmans that they have “created a masterpiece.” He went on to tout that “If I were just to wake up in Paddy Malone’s, it would take me a while before I realized that I wasn’t in Ireland.”

Equally, the seasoned staff is testament to the spirit of the Tatmans’ establishment. And while tradition is a core value at Paddy Malone’s, there are times when pioneering is called for. Allen and Marilee went smoke-free in 2007, three years before the city ordinance for such a practice was put in place. They both recall that as the turning point when the business truly began to blossom.

One step into this gathering place and you will be feeling right at home with a drink in hand and a freshly prepared meal before you. Marilee and Allen do their part to carry on the long tradition established at this vibrant spot where folks have long gathered to break bread and raise their glasses to celebrate good times.

“When people get here, they don’t want to leave,” Allen says. “We treat them like family.”