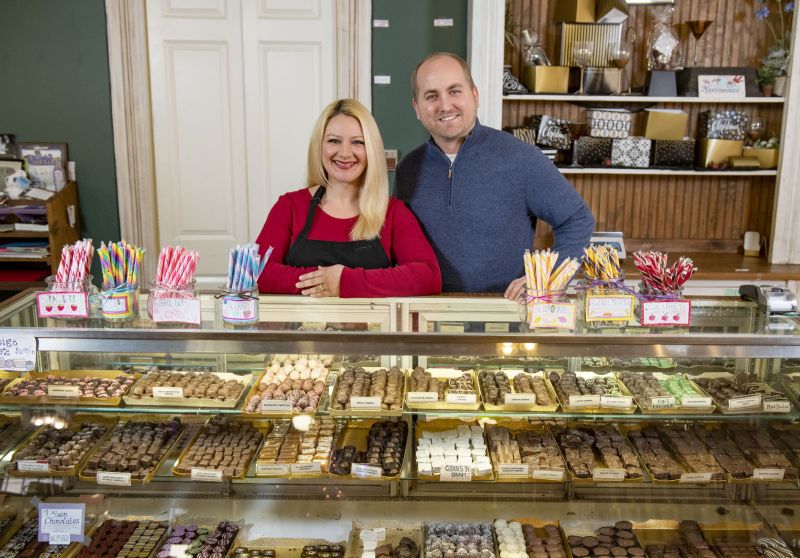 Early February is an exciting time for Mike and Amy Atkinson. The busy Christmas season has long since faded from their rear view mirror. Their downtown Columbia shop is a bustle of activity with Amy making sure everything up front is perfectly placed and Mike in the back carefully making his delectable treats. In a few short days, hundreds of mid-Missourians will be counting on them for the perfect Valentine’s Day gift.

The Atkinsons have owned and operated The Candy Factory for more than 10 years. The sweet store has a nearly 50-year history in the college town and is best known for the old-fashioned, homemade way in which they make their chocolates.

Mike grew up in Columbia as a literal “kid in a candy store.” His parents purchased The Candy Factory in 1986 when he was just 5 years old. He saw the late nights and early mornings his family would put in to ensure a successful business. Valentine’s Day is special at their store and Mike says the holiday has changed since he was younger.

“I got to watch the evolution of Valentine’s Day growing up here,” Mike says. “People used to just come in, and they still do, to get a Valentine’s Day specifi c candy that we make here on site. But, what has taken off and become kind of a local tradition is our chocolate-covered strawberries.” 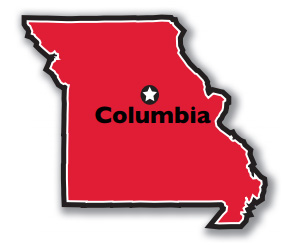 Amy and Mike Atkinson have been with The Candy Factory since 2005, when they took the business over from Mike’s parents.

Amy says the faces they see are usually familiar ones. “It’s sort of turned into a pilgrimage for a lot of people to come get a box of chocolate-covered strawberries year after year.”

Mike says the popularity of the gift continued to grow every year, leaving the chocolatiers scrambling to satisfy the demand. “Now we’ve got it down to a science for a very effi cient line when people come through the door,” he says.

Mike went to Baylor University in Waco, Texas to study business, but had no intentions of taking over the The Candy Factory. “He just liked the idea of owning a business,” Amy says. “He had an entrepreneurial spirit.”

The Atkinsons met at Baylor, where Amy was majoring in biology pre-med. They married in 2004 and the following year Mike was an auditor at a bank and Amy was working in a hospital. That’s when elder Atkinsons approached Mike and Amy about taking over The Candy Factory 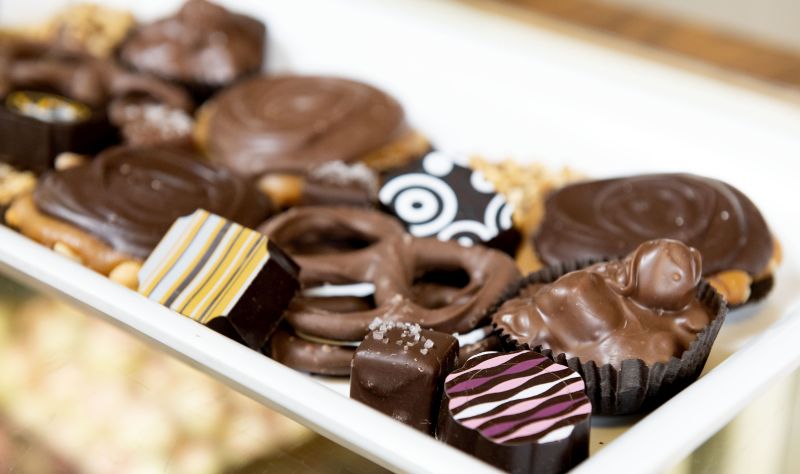 “It was 2005 and we were faced with this big decision,” Amy recalls. “We just kind of looked at each other and prayed about it. We thought, ‘Who gets the opportunity to own a candy store?’ We did and never looked back.”

Mike heads the production operation at The Candy Factory, and he and his team make everything from scratch. Guests can watch the candy being made by hand in old-fashioned kettles from a second-story viewing perch. Mike says that helps customers see the quality ingredients going into their candy.

“The quality of the product we make and the attention to detail sets us apart from a lot of mass-produced things you can buy at big-box stores,” he says. “People that have a discerning taste and palate are patrons of our store. They can come in and watch the candy being made, watch who’s making and see the old-fashioned candy-making techniques.”

Candy making is a mix of art and science. Years of experience have given Mike the skills to make them primarily by look and smell. Each
has a precise recipe and technique. Some require a special stirring pattern to get it just right. Mike forgoes making chocolate altogether on some humid summer days as the humidity can affect the quality.

In addition to their traditional caramels, truffl es and sweet creations, Mike and Amy keep the shelves full with rotating seasonal items. Chocolate bunnies start hopping around the store as Easter draws near. Hand-dipped caramel apples take center stage as Mizzou football kicks off. In the winter, the scent of house-popped specialty popcorn greets customers.

Mike says his favorite items in the store are ones that have a combination of sweet and salty such as the sea salt caramels and chocolatecovered potato chips. As for Amy: “After all these years, my favorite — along with a lot of other women — is the chocolate-covered strawberries.”

Making different variations or experimenting with new fl avors is something Mike practices during the slower months. “It gives me an avenue for creativity,” he says. “I never considered myself a chef or had any culinary aspirations before working here. I’ve found it very natural and fun.”

As The Candy Factory has grown and moved to new locations throughout its history, downtown Columbia has remained a constant. Everything related to the store is done at the corner of 7th and Cherry streets. “It’s part of the identity of The Candy Factory,” Amy says. “We produce, package and sell all our own candy right here in downtown Columbia. That’s becoming more and more rare, but it is who we are.”

For more information on The Candy Factory, call the store at 573-443-8222 or visit www. thecandyfactory.biz.