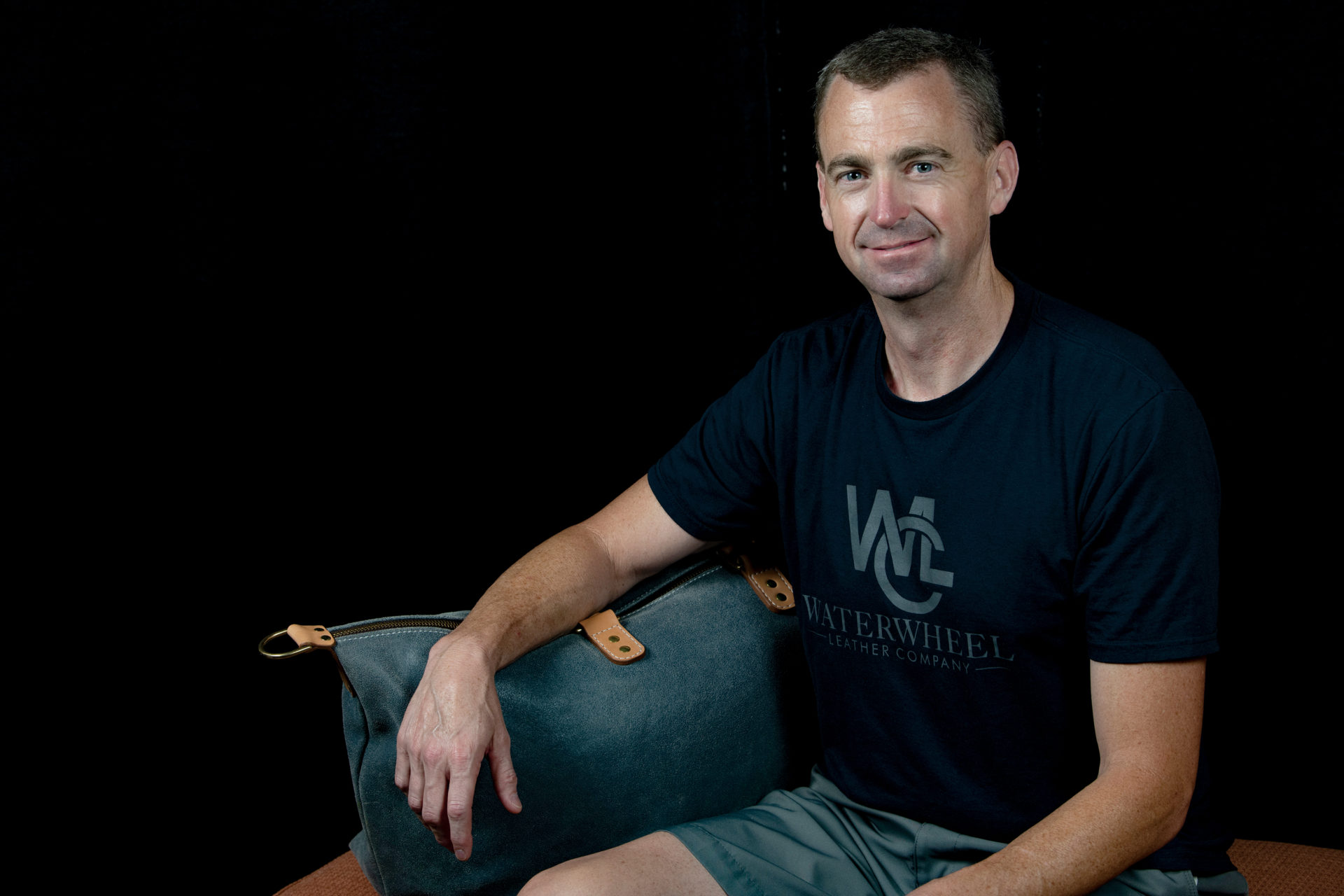 On the river of life, it’s not always easy to see what waits around the next bend. After careers in law enforcement and security and living in the Middle East, John Seawright felt adrift and unfulfilled professionally. With his intuition as a compass, he set out on a new course with Waterwheel Leatherworking Co.

Although he has been working leather with increasing mastery since 2016, John’s identity as an artist has come slowly and taken significant personal work. While his father was an architect and his mother a talented painter, it took him into his 40s to fully reconcile the athletic, macho self-image of his youth with his old-fashioned instincts and artistic sensibilities. Now he embraces his talent through his Ozark leatherworking business. “It starts out with a function and then my artistry comes in to give it form and beauty and ultimately how well it’s made,” says John of his leatherwork.

A trickle of opportunity and a giant leap of faith ushered John and his wife, Leslie, all the way to the Arabian Peninsula where she taught English at Education City in Qatar and John worked in security making risk assessments for faculty and student travel. While browsing with Leslie in luxury boutiques, he came across leather purses and flashed back to an eighth grade industrial arts class where he’d made a leather wallet and checkbook cover. During school John’s identity was linked to his athletic prowess in track and basketball; no one seemed to do this kind of handicraft in his small Oklahoma hometown. “The two worlds of being a designer and being an athlete never went together in my head,” says the White River Valley Electric Cooperative member. “Other than this short period, my interest in leatherworking went dormant for 30 years.”

Despite the time lapse, standing in the Qatari boutique handling exclusive brands like Gucci, Prada, Hermes and Valentino, a pull came over him and he said to his wife, “I think I could make something like these handbags.” She was dubious, but an ember had been quietly reignited.

When Leslie accepted a new position with Missouri State University, the couple shifted course and returned to the Midwest after four years abroad. With his wife’s support, John set out into leatherworking. A quick internet search yielded that Springfield was none other than a hub of American leather. “Up pops Tandy Leather and Springfield Leather Company and I think to myself, ‘Are you kidding me?’ It truly felt like I was going down the correct road because it was so easy.”

Things quickly gained momentum as he took a workshop at Tandy Leather. John set up his own shop with striking full grain hides, sewing machines and all the tools of the trade including hole cutters, scrolls and punches. Having drawn renderings for his father’s architecture firm, John now intricately sketches handbags, travel bags and clutches. Drafting courses he took in college helped him envision 3D designs. Being a fourth-generation polo player fed his knowledge of how durable leather goods could serve the consumer. “It all clicked in my mind and became very easy,” says John.

He continued to follow the flow of leatherworking. As a self-taught craftsman, the hardest part was learning the sequence of construction. It was vital that each step be completed in proper order to fit liners, hide screws, sew clasps, edge coat components, stitch handles and fit buckles together seamlessly, hiding the engineering while showcasing handiwork and design. Each leather creation is one-of-a-kind and can take 60 to 80 hours of production. John says, “When a bag is going together with all the elements and the math and the dimensions line up, it’s like poetry.” However, if an error is made late in the assembly stages, all of that effort can only be valued as a learning experience. 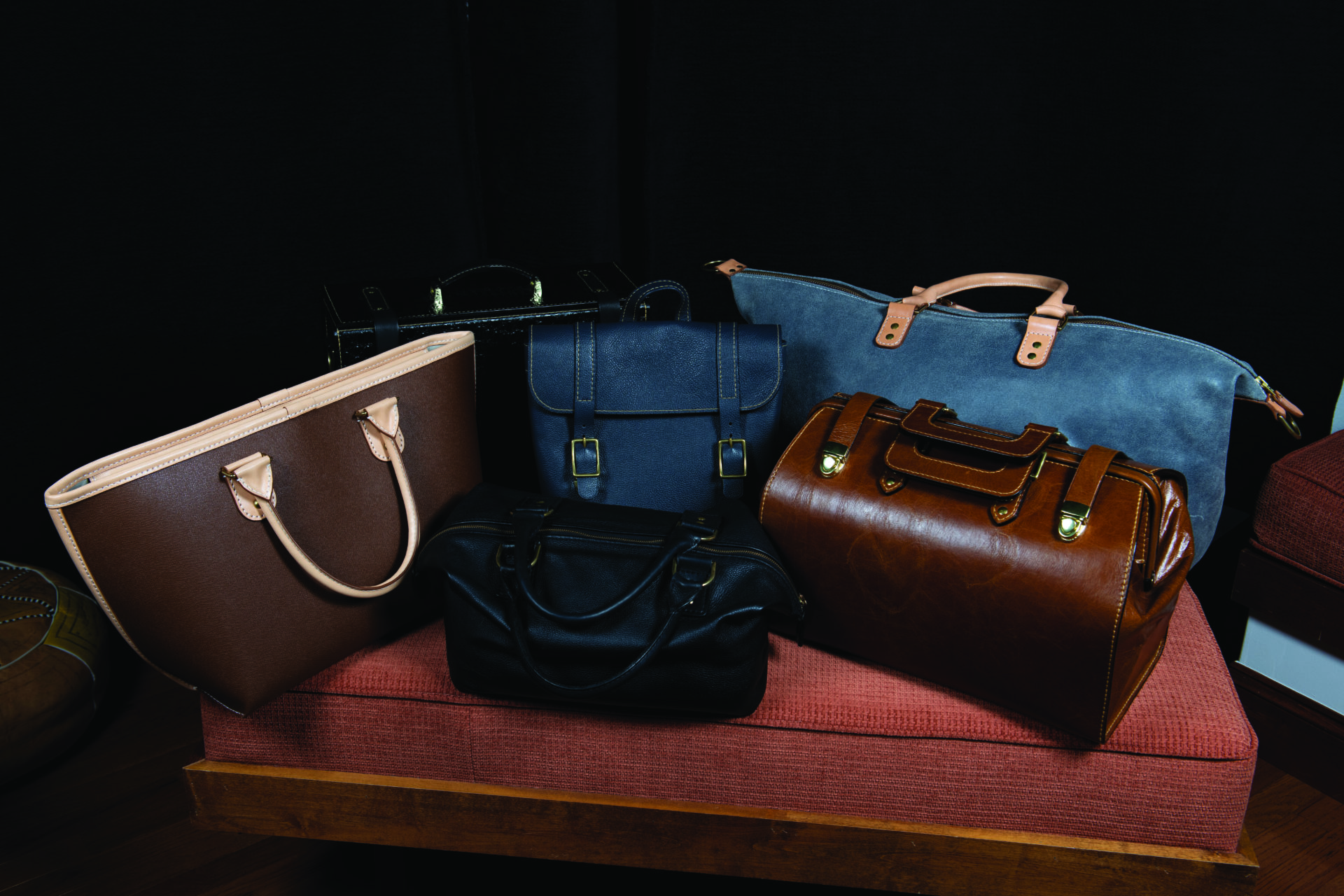 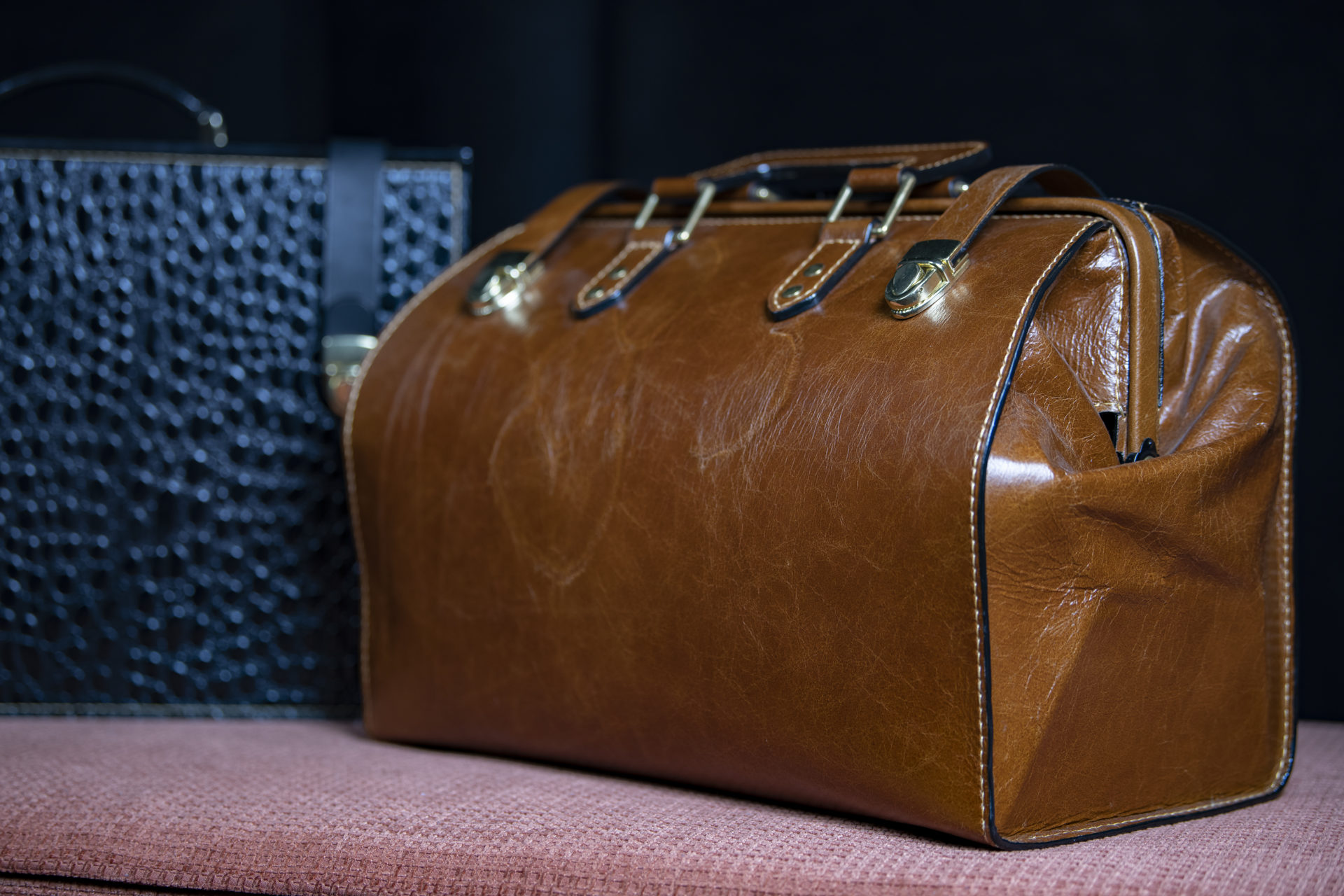 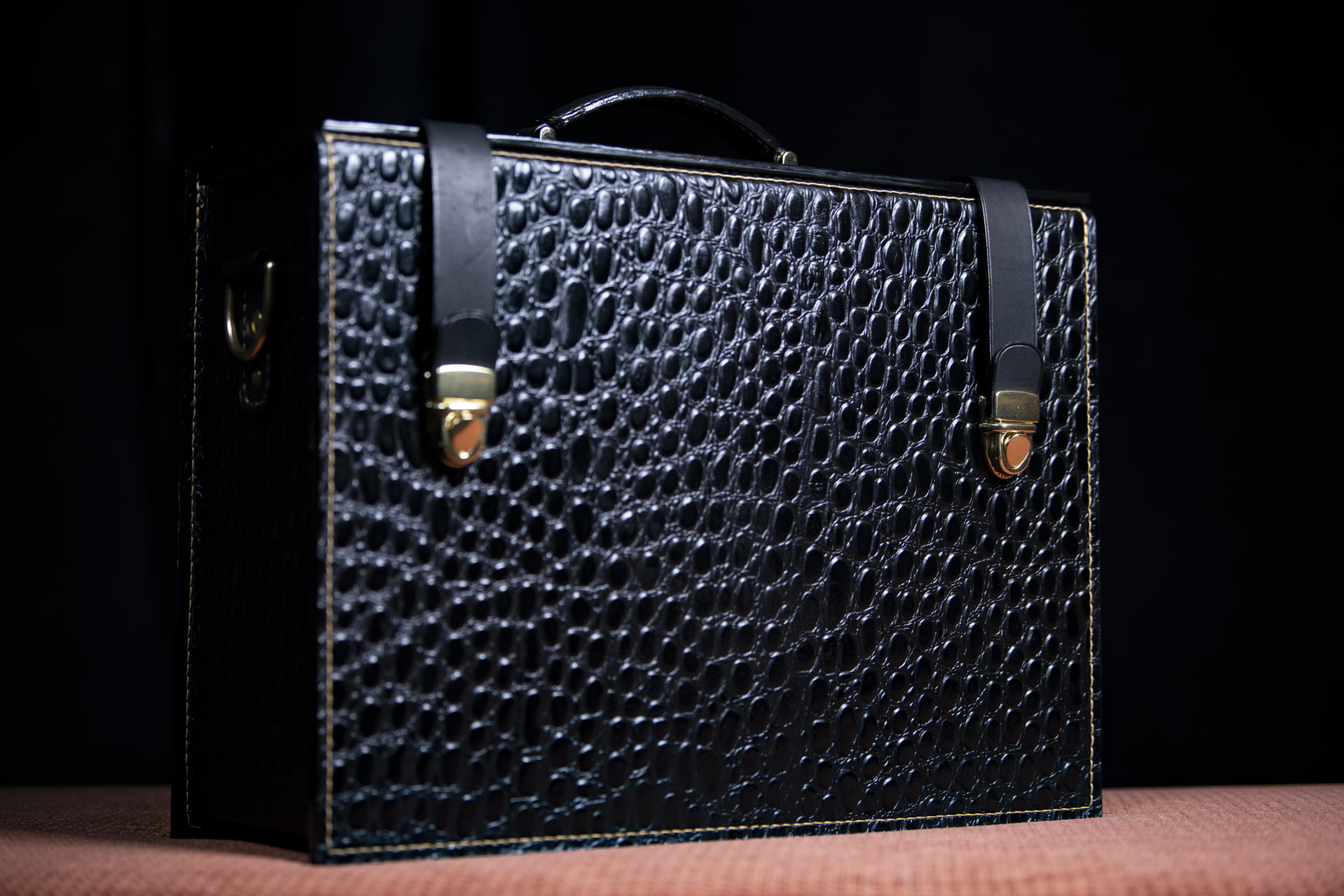 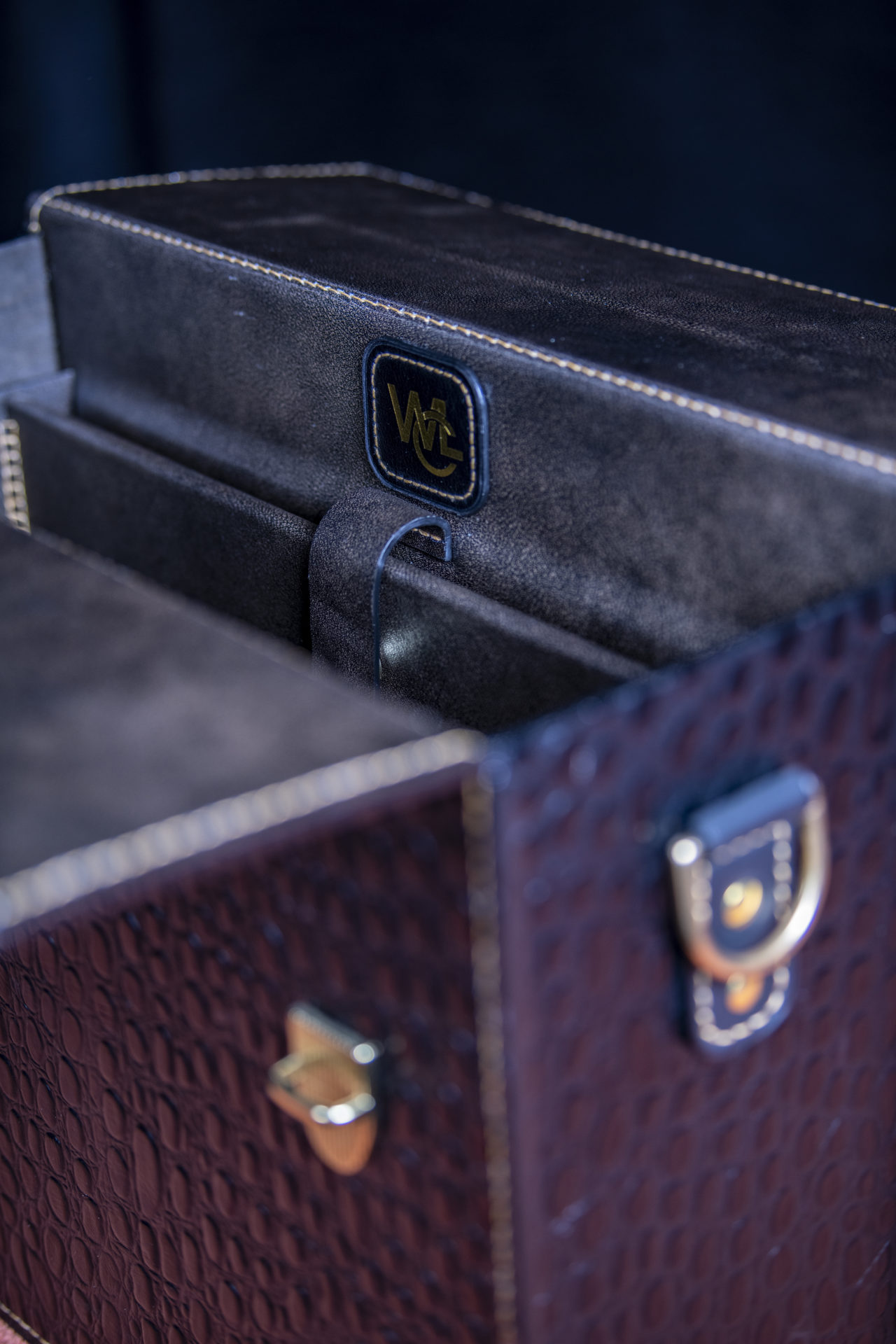 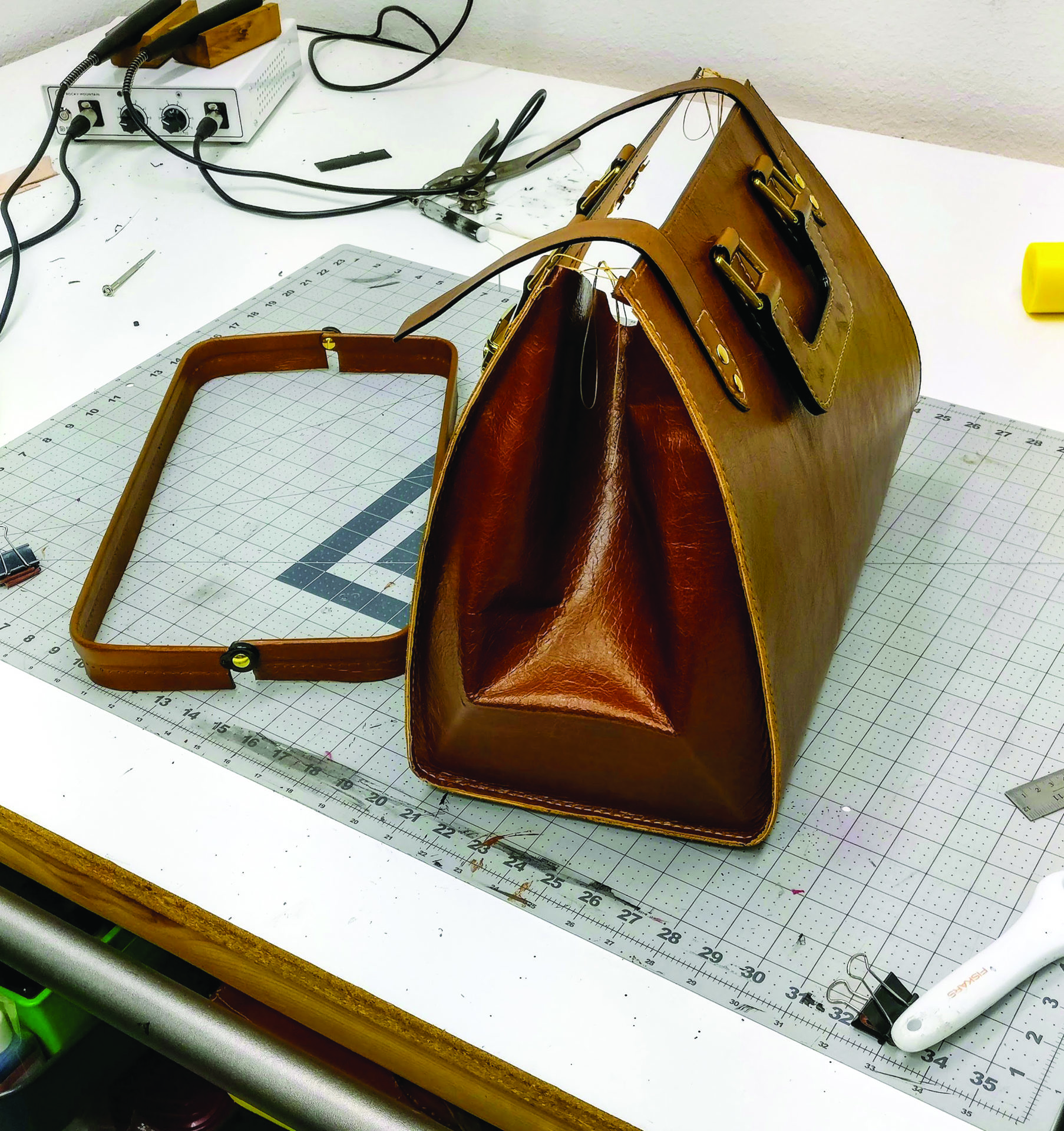 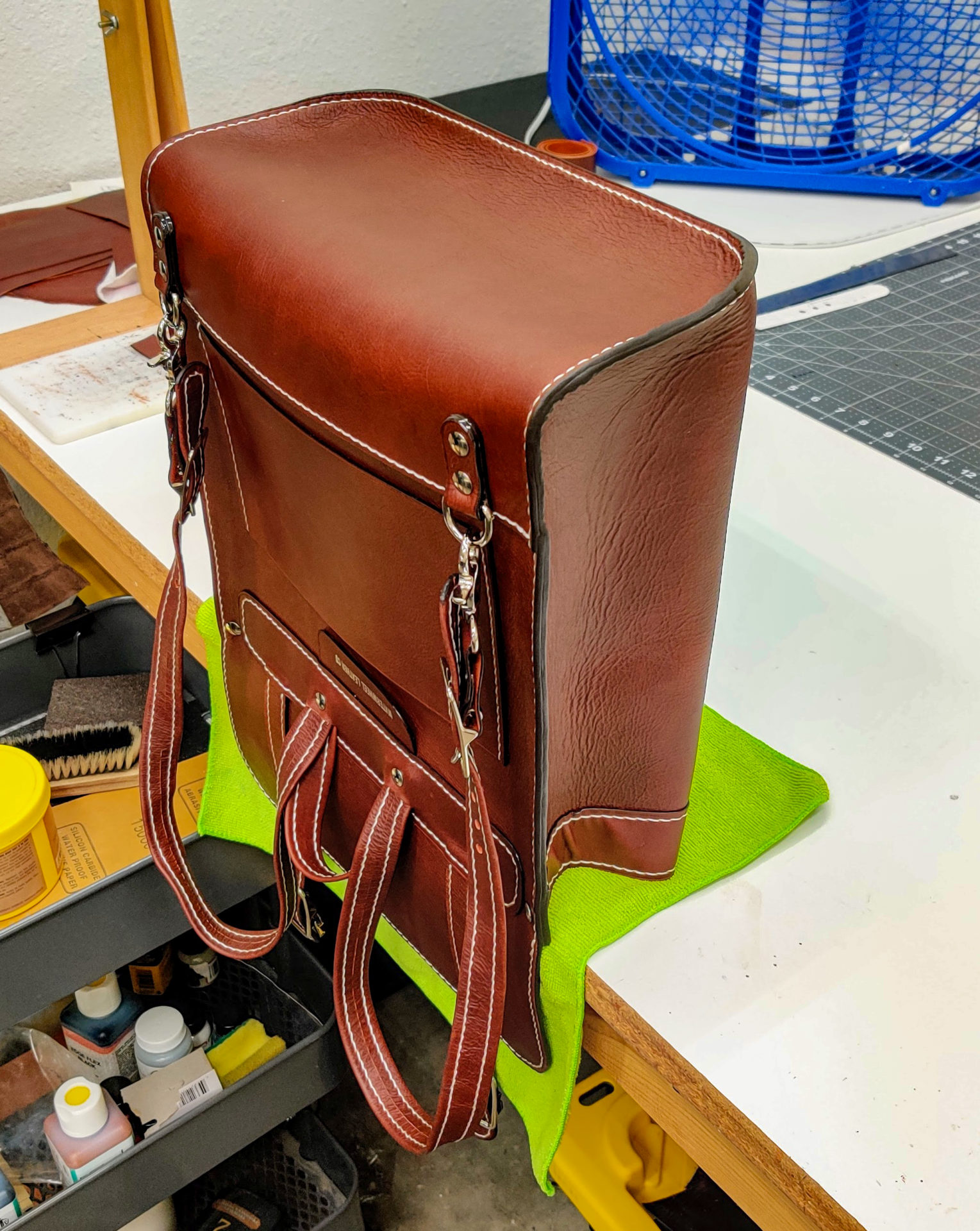 John uses premium leather, hand-stitches 90% of his pieces and rarely duplicates the use of a single piece of leather. He’s perfected a six- to eight-step edge coating process and his designs are intentionally timeless and meant to transcend mass-produced fashion trends. The leather he uses slowly softens with wear, adding character and uniqueness. With prices ranging from $800 to $1,200 for a handbag, he creates pieces of lasting value. No corners are cut in making such products. John says they are comparable to the Hermes brand since his too are made by hand. He holds dear stories of his ancestors who survived the Dust Bowl, and his creations hearken back to a pre-industrial time when goods were made by hand and built to last a lifetime.

As a member of www.buymissouri.net, John is proud to produce top quality leather goods made in the Show-Me State. In addition to handbags, totes and clutches, he also creates backpacks, journals and occasionally custom pieces that have included furniture and a gun case. While new product ideas continue to spark in his mind, his customer base grows through word of mouth.

John encourages people to listen to their intuition and pursue feasible life course changes. “Life could not be better; I could not be happier,” he says. The best part about his work is the peace that comes upon him when he’s working the leather. The process calms him and puts him in a happy place. In turn, his pieces bring joy to his customers and the waterwheel continues to turn.

Joplin is a freelance writer from Loose Creek.