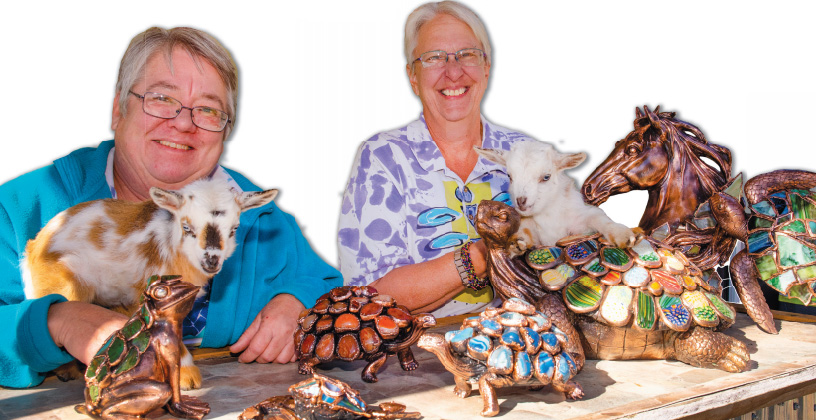 Turtles of all sizes are born in the basement studio. Some are small enough to hold between an index finger and thumb. Others are massive and sit on the fl oor.

Janet Weilbrenner looks down the two walls of shelves packed with containers, then over at Stacy Benesh and says, “We need to go to Tucson to buy more stones. We’re out of big stones.”

Stacy smiles and nods in agreement. The duo makes up the collaboration of a West Plains art business called Copper Turtles. The women travel around the country and sell their copper sculptures at art shows.

Back in the ’80s, Janet lived in Iowa and worked in restaurant management. “But I got tired of all the long hours,” she says. “My mother was a retired art teacher making jewelry, so we teamed up. A few years later, I branched out on my own and started selling jewelry at art fairs.”

The successful clay and copper jeweler loved making pieces for people to wear — but she still needed to relax. With her love of animals, Janet began trail riding, and that’s how she met vet tech Stacy.

“My business was doing well and I needed help, so Stacy quit her job and came on board,” says Janet. “My specialty was making turtles and frog pins from clay, and then encasing them in copper. I don’t know why, but people just loved them.” 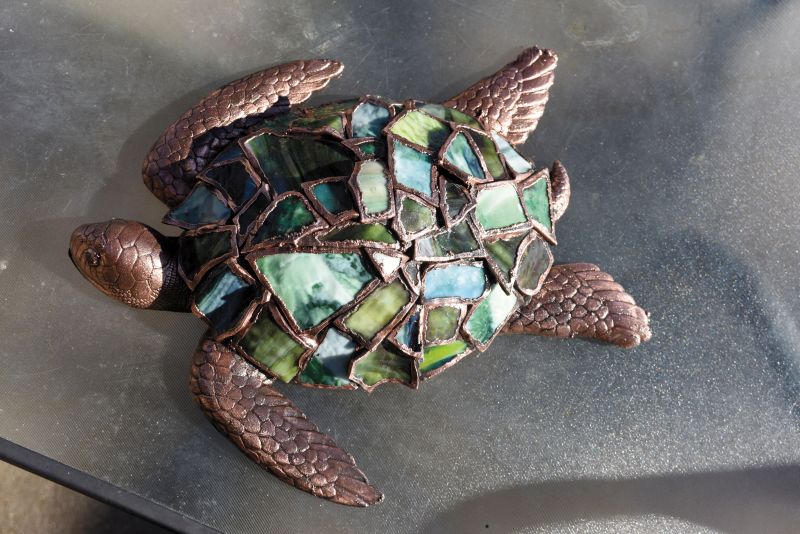 One day Stacy made a turtle and Janet pointed out that it was “too big to be a pin,” and told Stacy the reptile would “most likely just sit there.”

“We took it to an art show and it sold immediately,” says Stacy, 59. “You just never know. What may not appeal to one person might be the thing that catches someone else’s eye.”

That over-sized frog pin was the beginning of Copper Turtles, which is served by Howell-Oregon Electric Cooperative. The Best of Missouri Hands juried artists have been in business for more than 30 years and average 25 art shows a year across the United States. Pieces start around $20 for a small turtle and can go as high as $2,000 for their largest turtle.

Janet and Stacy’s handiwork has evolved into a distinctive style which is unique to them. Each piece utilizes a technique Janet’s mother taught her when making jewelry: electroforming. The method joins metal to another medium by using low-voltage electric charges to create a thick metal layer. In this case, that metal is copper.

To add to the uniqueness of their critters, the couple includes precious polished stones such as tiger’s eye, sodalite, carnelian and malachite for example, as well as abalone shells and Italian millefi ori-style glass beads they make themselves in a kiln.

“There are probably 12 steps to getting a piece completed,” says Janet. “No two pieces ever come out alike and that’s what makes this so interesting.”

When the duo is on the road they don’t work on creating the dozens of turtles, fi sh, crabs, butterfl ies, alligators, dragons and more which can be seen in their show booth. The numerous steps require the artists to do their hands-on creating at home during the winter months.

While they won’t divulge all of their proprietary process, Janet and Stacy will say they have dozens of forms they use to sculpt their creation frames. Next, they apply the stone, glass or shell layer and allow them to dry. Then they electroform copper around each piece and allow it to oxidize. When the piece is nearly fi nished, they polish each creation and coat it with a lacquer to keep it looking bright.

The electroforming step takes anywhere from 24 hours to two weeks to complete depending on the size of the piece.

“A lot of people think what we do is like stained glass,” says Janet. “But it’s not. We don’t solder anything. The process uses vats of acid solutions we’ve created and charged copper anodes. It’s kind of a mad-scientist thing.”

Their copper creations have garnered them several awards, including two best of show in art fairs through the years. While that’s not the main goal, Janet and Stacy appreciate the nod to their unusual art.

“Our newest pieces are garnering the attention of hunters. We now make copper European mounts for the hunters,” Janet says, adding they always try creating new ways to use their creative coppering method. So far, the duo has tackled the skulls of deer, buffalo, longhorn cattle and a bighorn ram.

“Commissions are welcome,” she adds. “The deer skulls start at $350 depending on whether or not the owner desires copper alone or copper with a stone or shell to fi nish off the skull.”

“We both love animals. Besides our triple-registered goats we sell, we enjoy our host of dogs, cats, chickens, peacocks and horses,” says 62-year-old Janet, smiling.

Janet says they have the most “adorable kids” (goats) and invites anyone to come over to visit or buy the little cuties.

The duo’s love of animals — both stationary and live — keeps life interesting for them.

“It’s not the path everyone would have chosen, but we’re having a good time doing what we do,” says Janet. “Who knows where the road will lead us next.”