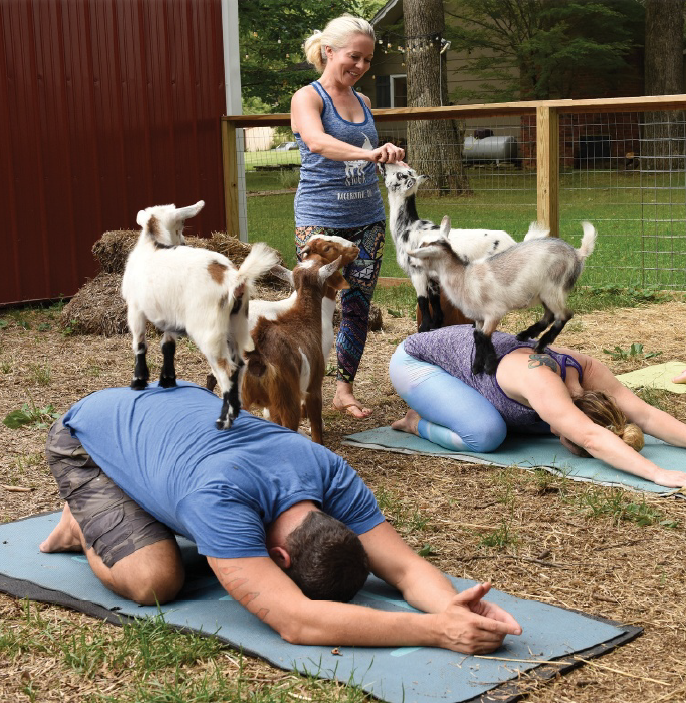 Relax with the critter on Herding Dogs Farm

The sun sets low on the horizon and the canvas sky is painted in goldenpink hues. A light breeze rustles the oak leaves as the group settles with their mats. Then Stephanie Wubbena opens the gate and in run her assistants — Rose, Lucy, Emmy, Coco, Marybelle and Lottie.

Happily, the hooved helpers hurry off to visit those attending the session, excited to be hugged or allowed to climb onto the backs of those warming up with their downward-facing dog move, plank or child’s pose.

Stephanie and her husband, Eric, opened Goats and Yoga in 2017. The classes are held at their home, Herding Dogs Farm, a 10-acre farm in Rogersville. While they have rabbits, chickens, turkeys, dogs and cats, it’s usually the 24 Nigerian dwarf goats which garner most of the attention from visitors.

“Our business tag line says it all — ‘Where zen and joy meet,’ ” Stephanie says. “We think spending time with our goats and bunnies while communing with nature is a beautiful mix, both inside and out.”

A longtime yoga and fitness buff, Stephanie brings more than 20 years of expertise, as well as experience in occupational therapy, to Goats and Yoga — or in this case — to the barnyard.

If you’re a no-nonsense kind of yoga attendee, these sort of classes may not be your thing. But for those attending a Goats and Yoga session at the Wubbena’s farm, the novelty of having little “kids” run across your back while doing meditative moves under the wide open sky may be the perfect cure-all.

“It’s so much more than yoga,” says Stephanie, who is a member of Webster Electric Cooperative. “It’s about clearing your mind of every day stresses, soaking in nature and letting your body totally relax. And with curious goats, there’s always laughter involved, too.”

Goat yoga originally began in 2016 when Oregon farmer and yoga instructor Lainey Morse held the first class, allowing her goats to roam among attendees during the session. While still a relatively new concept, the unique combination of yoga with goats has quickly grown in popularity, bringing in millions of dollars annually for the unique exercise industry. While she doesn’t get into specifics, Stephanie says the business is rewarding “both emotionally and financially.”

Choosing to go all in with the critter and relaxation plan, the yogini recently sold her business, Live Pure Yoga, in Springfield so she could go full time with Goats and Yoga. These days, Stephanie says “namaste” to yoga attendees on their farm on Friday, Saturday and Sunday for evening goat and yoga classes.

“We’ve had people come from as far away as Tulsa to take a class,” she says. “We’ve even had one family from Kansas specifically plan their vacation so they attend a session here at the farm.”

More than half of the attendees are regulars with the rest generally attending to be able to say that they have indeed experienced the fun of an hour of goats tap-dancing on them during class. Stephanie points out one of the little Nigerian goats standing on the shoulders of an attendee. The goat holds his stand while nibbling on a pony tail. The college girl laughs and both of them are unharmed by the fun moment.

While yoga may seem like an “out there” exercise class for some, Goats and Yoga falls into a relaxing way to quietly release the daily stresses of the world and concentrate on some quality “me” time, something people feel guilty about doing these days.

“There’s so many advantages to spending time with animals,” says Stephanie. “You can lower blood pressure, reduce anxiety and stress, as long as you aren’t afraid of the animals.

“Part of people reducing their stress around our goats and bunnies is that they’re helping us socialize the animals and in turn, people calm down and forget whatever’s got them wound so tight — which is exactly what we hope for.”

While you’re on a yoga mat for the class, you are on the goats’ property — and they might poo right then and there, so don’t be upset. They are, after all, sharing their barnyard home with you.

Sometimes Stephanie ends the class with a softer meditation partner. “Bunny meditation is quickly becoming as popular as goats and yoga,” says Stephanie. “It’s a win-win for everyone.”

“I’ve done bunny meditation as well as goat yoga here and it’s easily the most fun I’ve had while living in Missouri — I can’t wait to go again and bring my friends so they can experience this, too.”

Stephanie says another segment of her yoga business is quickly climbing in popularity — goat grams.

“People will call and ask ‘Can you bring your goats here?’ and now we can,” Stephanie says, noting they have the proper state license to do so. “Nursing homes, birthday parties, bachelorette parties, you name it, we’ve taken a goat gram there. Corporations are starting to catch on and have us deliver them as part of their retreats now, too.”

According to the yoga instructor, a goat gram experience includes a card, flowers and a basket with two baby goats to play with. The 30-minute session runs $75 for the trendy telegram.

“It’s pretty easy to de-stress when a bunny is in your hands staring up at you,” says Stephanie. “I enjoy watching everyone become almost childlike in their excitement over the animals, that’s rewarding for us all.”