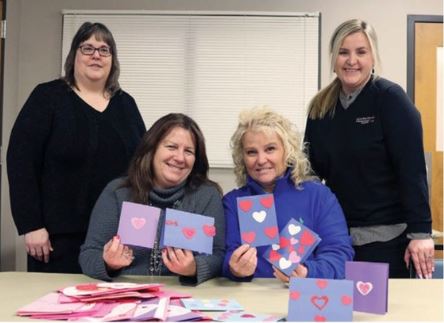 Co-op employees team up to make community a better place

The generosity of cooperative employees can manifest in many different ways. At Cuivre River Electric Cooperative (CREC), it might be preparing lunch for hundreds of community volunteers on a muggy July afternoon. Or applying siding and sofﬁ t to help give “a hand up, not a hand out” at a Habitat for Humanity home on a brisk November morning.

“The cooperative principle ‘Concern for Community’ is something that we all live by,” says Mary Wilson, CREC manager of communication. “Most people that work at the co-op live within our service area. They’re already used to giving back to our community through their churches, kids’ activities or civic organizations.”

Cuivre River introduced a new employee initiative in 2018 called Cuivre Cares. The program — #cuivrecares on social media — seeks to empower employees and their families to volunteer in the communities in which they live and work for the betterment of everyone.

Giving back is nothing new for the Troy-based electric cooperative. For more than two decades the cooperative’s members have been rounding up their bills to the next dollar to fund needs within their ﬁ ve-county service area. A community trust board has distributed more than $6 million since 1997. However, CEO/General Manager Doug Tracy knew the co-op could do more.

“It’s one thing to write a check, but we also wanted to give back in a tangible way with sweat equity in our service projects,” he says. “There’s a big difference when our employees and their families are donating their time on weekends to go out and improve their communities.”

The ﬁrst Cuivre Cares project had approximately 50 employees acting in a supportive role for Troy Story 2. Employees raised tents, provided meals and assisted in other preparations for 450 teenage volunteers from across the Midwest who descended on Troy to complete 60 community projects ranging from landscaping to building accessible ramps.

This past September, Cuivre employees spent a day landscaping at a local Emmaus Home, a location that serves clients with intellectual and developmental disabilities. Their efforts helped ensure funds for the faith-based program are directed toward Emmaus clients and not on landscaping.

“We weren’t just pulling weeds,” Doug says. “We were there for about seven or eight hours cleaning it up and making it look really nice. We just wanted to help make them feel good.”

Cuivre Cares helps bring together all the cooperative’s employees, from recent college graduates to those who have lived, worked and volunteered in their community for decades.

“Millenials are really into giving back and making a difference,” Doug says. “We have a wide demographic of employees and thought this would be a great way of not only giving back in a meaningful way but also working together as a cooperative team. Some employees bring their families and we’re outside of the ofﬁ ce in our blue jeans. Everyone just gets to know each other a little better.”

Cuivre’s outreach includes more than these weekend projects. In the past two years, CREC has sent trucks and members of its right-of-way crew to participate in a beau-tiﬁ cation project at Jefferson Barracks National Cemetery. The crews joined other tree care professionals in service to Saluting Branches, a nonproﬁ t that supports veterans and their families. The crews trimmed trees and removed downed limbs from the cemetery.

“It’s a great opportunity to give back to the service-men and servicewomen who have given their lives for our freedom,” says Scott Skopec, CREC right-of-way superintendent. “Being an electric cooperative, giving back to the community is a big part of what we do. We look forward to participating again.”

Employees are stepping up inside the walls of the cooperative ofﬁces as well. During the holidays this past year, CREC staff competed in a mini Christmas tree decorating contest. The trees were either donated to local retirement homes or placed on display in the co-op ofﬁces to be sold with the proceeds beneﬁ ting The Key Center, an organization that serves homeless youth in Lincoln County. In February, employees were encouraged to participate in random acts of kindness. One week included employee-made Valentine’s Day cards that were distributed to a local nursing home.

“Because we work for cooperatives, we work together,” Mary says. “We’re able to do some things outside of our normal roles, beyond our job descriptions. It’s not just what we can do to help the co-op; it’s what can we do beyond that?”

The co-op has utilized the matching grant program, Sharing Success, from its banking partner CoBank since 2012. In total, Cuivre River Electric has distributed $40,000 in community grants from the program, most recently to The Key Youth Center and the Greater St. Louis Honor Flight.

Doug says that these programs and more are just part of what makes the cooperative difference to the member at the end of the line.

“Concern for Community is one of the best ways for us to differentiate ourselves from other electric providers,” he says. “It’s not just backing local programs ﬁnancially. It’s our people. It’s our service projects or even something as simple as having employees in local Rotary and Lions clubs. It makes all the difference.”