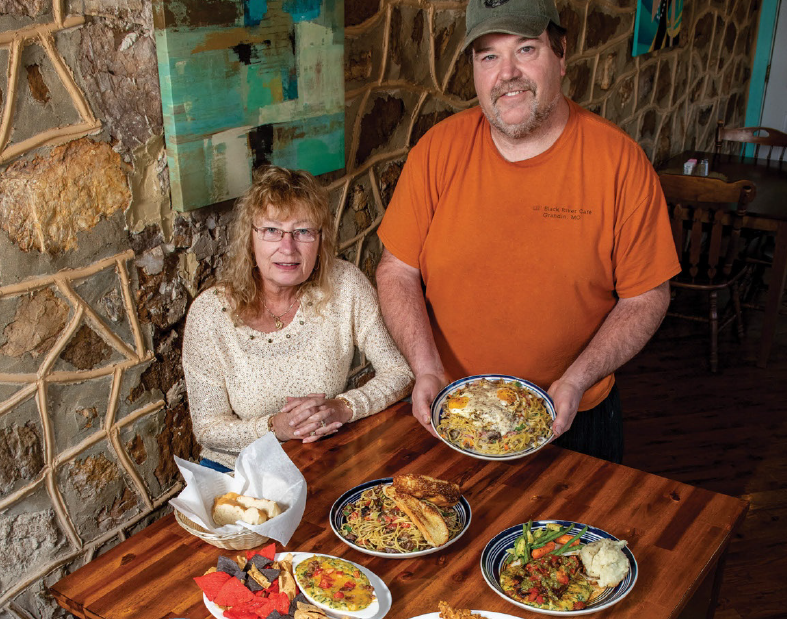 When Alan and Valerie Porter returned to Alan’s stomping grounds in south-central Missouri, the plan was to build a log home with a wraparound porch and take it easy. The slower pace of life appealed to the couple, particularly Alan, after more than 13 years of cooking during the busy tourist seasons in Fort Myers Beach, Florida. It didn’t take long for kitchen fever to strike the self-trained chef and the idea for the Lil’ Black River Cafe was born.

“I like to say, ‘we’re the only people who moved from Florida to Missouri just to buy ourselves a job,’ ” Valerie says.

The restaurant highlights many of the influences Alan has picked up over decades of cooking different styles and flavors of food. Diners of the former Casa Del Rio in Poplar Bluff or La Mer Belle or The Carriage House Pub and Eatery in Springfield have all tasted some of Alan’s cooking in years past. Tex-Mex, Italian, seafood and down-home country favorites all find their way on to the Lil’ Black River Cafe’s menu, and Alan’s never afraid to try something new or honor a diner’s request.

“A lot of it is just playing around, but I don’t have to play too much with it — it usually works out.” Alan says, when
asked where his culinary inspirations take him. “I’m here to make people happy, so if it means adjusting something,
that’s what we do.”

After some searching, the husband-and-wife duo found a building on the banks of the Little Black River in Grandin.
Its cornerstone laid in 1887 and lacking plumbing and electricity, the future restaurant needed more than a little work before Alan could get busy creating. With the extensive remodel behind them, the cafe opened on Mother’s Day in 2014. The couple had no concerns about trying to operate a restaurant 25 minutes from the nearest city — Poplar Bluff — or the traffic on Highway 60.

“I knew, coming from the area, that people traveled for good food,” Alan says. “And I figured I could give people out
this way something that they’re not accustomed to at a really good price.”

As the sign out front says, the owners pride the cafe on its hormone-free meats and homemade bread, sauces and dressings. The marinara and barbecue sauces were so frequently requested, the cafe had to start selling them by the Mason jar. Equally popular are the French loaves and cinnamon rolls, which just like the tartar sauce and hamburger buns are freshly made every day. They also showcase Alan’s ability as a baker, a skill he picked up while enlisted in the U.S. Navy.

“I guess he did OK — they didn’t throw him overboard, anyway,” Valerie quips.

Few diners skip the appetizer menu, and two of the favorites — Spinach & Artichoke Dip and Pigs In Heat — are typical of the types of twists Alan puts on his entrees. In the former, chopped spinach is added to sliced artichoke, diced onion,
cream cheese and heavy whipping cream for the dip which is topped with cheddar-Jack cheese and diced bacon.

For the latter, jalapeno poppers are stuffed to the brim with sausage, onions, bacon, cilantro plus cheddar- Jack, cream and Parmesan cheeses and Alan’s own blend of spices.

“To me, it’s simple,” Alan says. “I just have a knack for putting different things together.” Across the menu, from breakfast to dinner, there are some commonalities among the dishes. From the mashed and baked potatoes all the way down to the fries, Alan is adamant that nothing comes out of the box or the freezer. And if the main dish doesn’t incorporate fresh vegetables, you can be sure there will be some on the side.

“There were a lot of people who weren’t into vegetables,” Alan recalls with a laugh, “including a lot of the girls on our wait staff. But we started them off on the dip and went from there.” 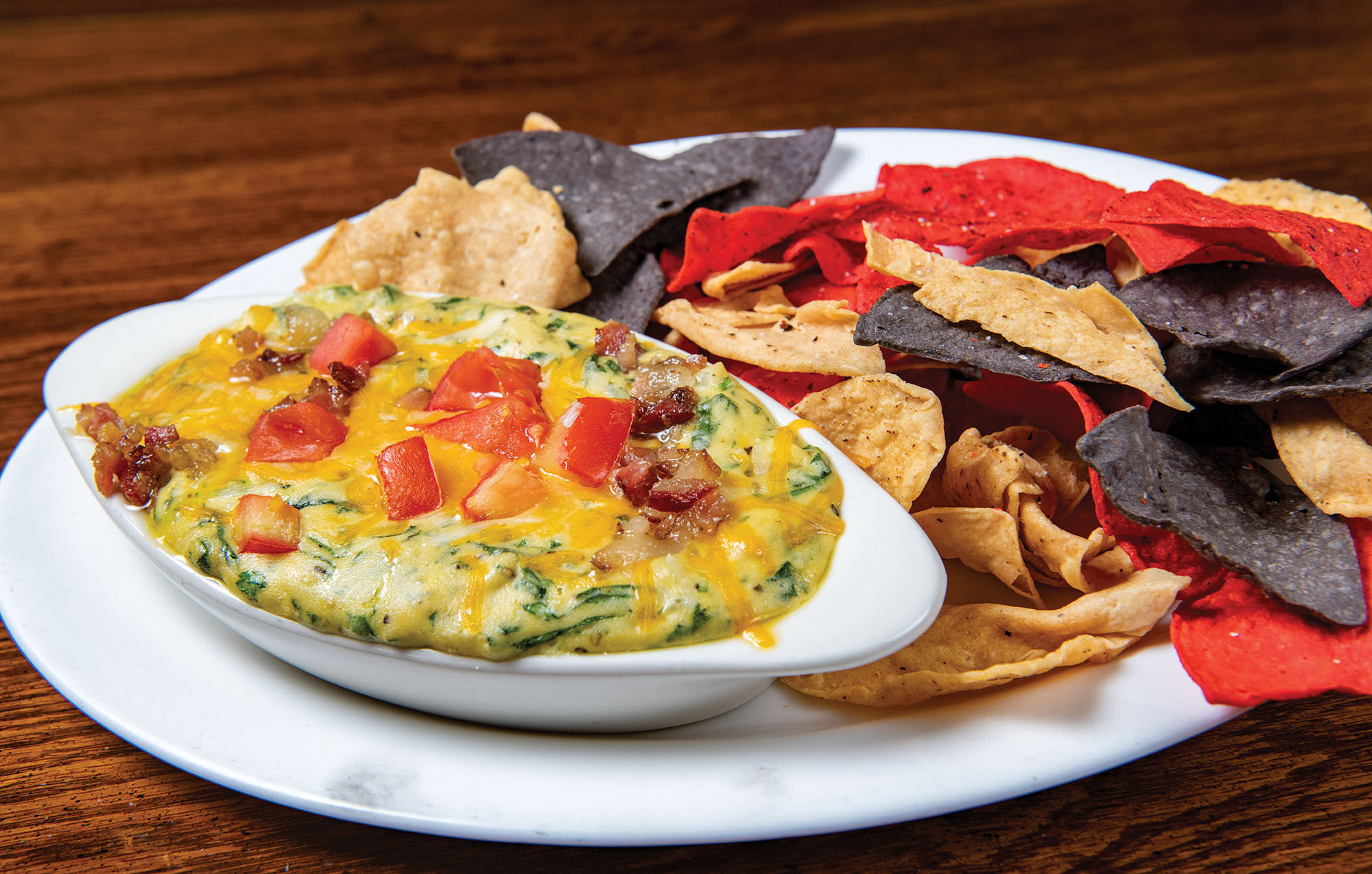 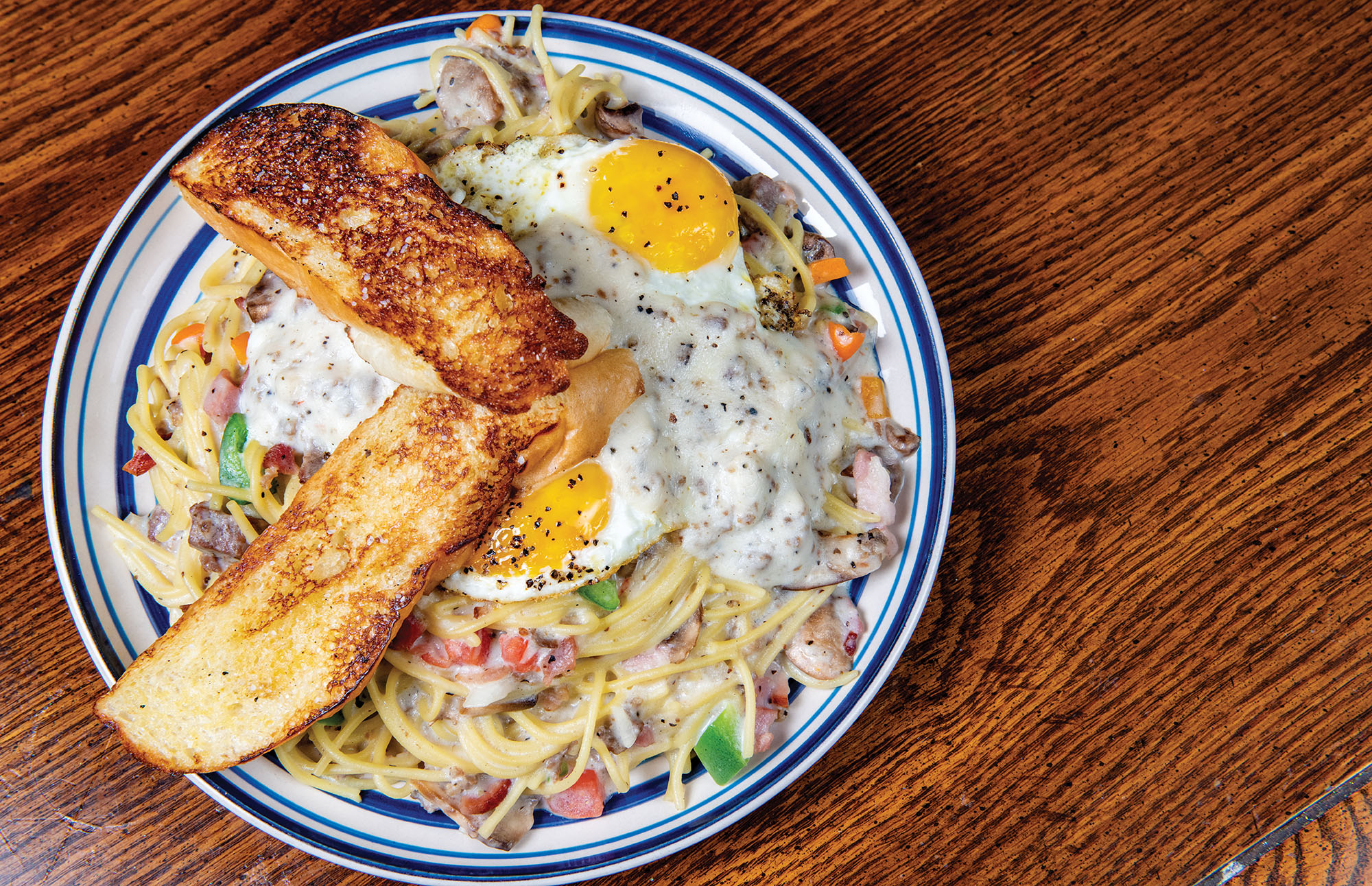 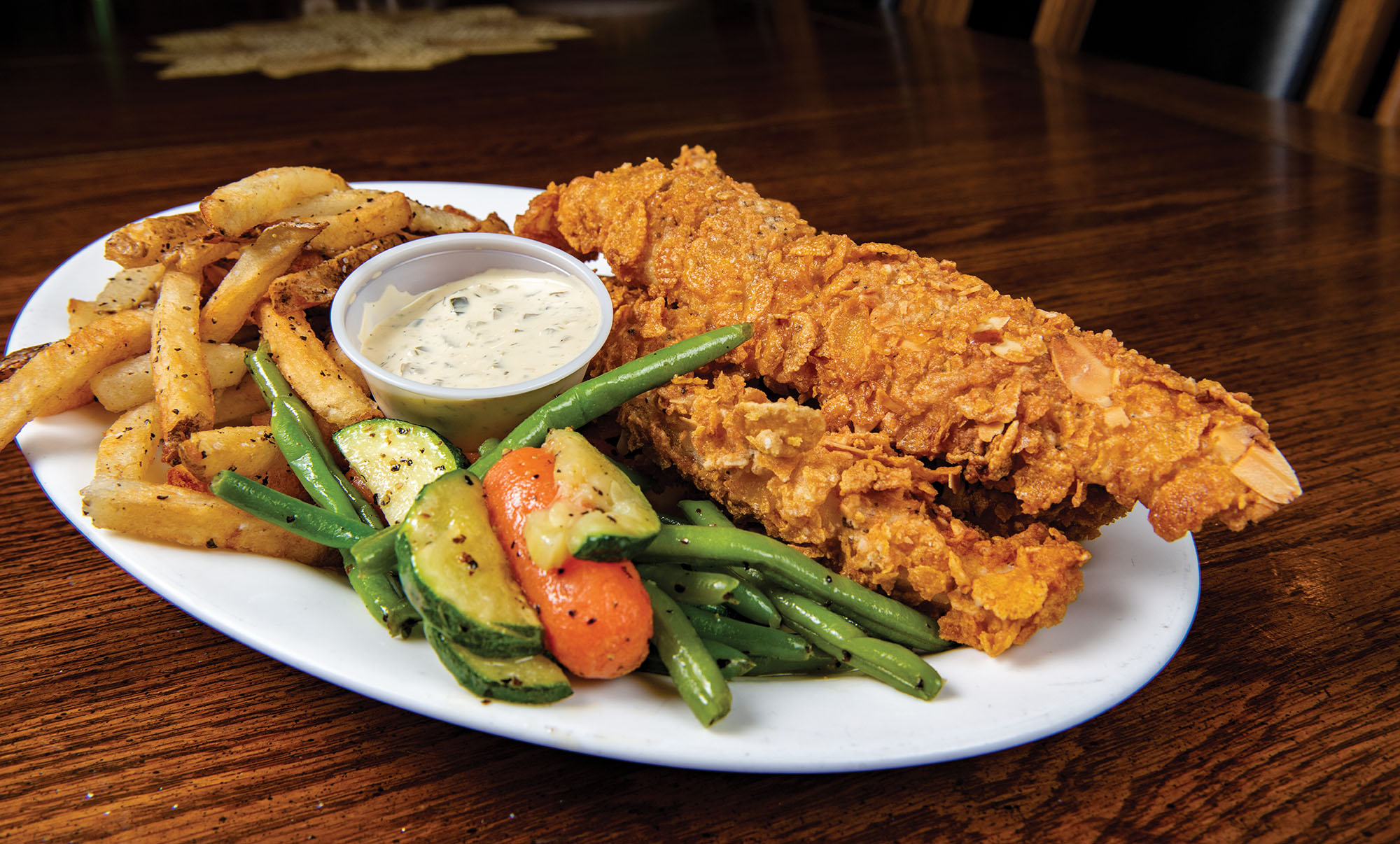 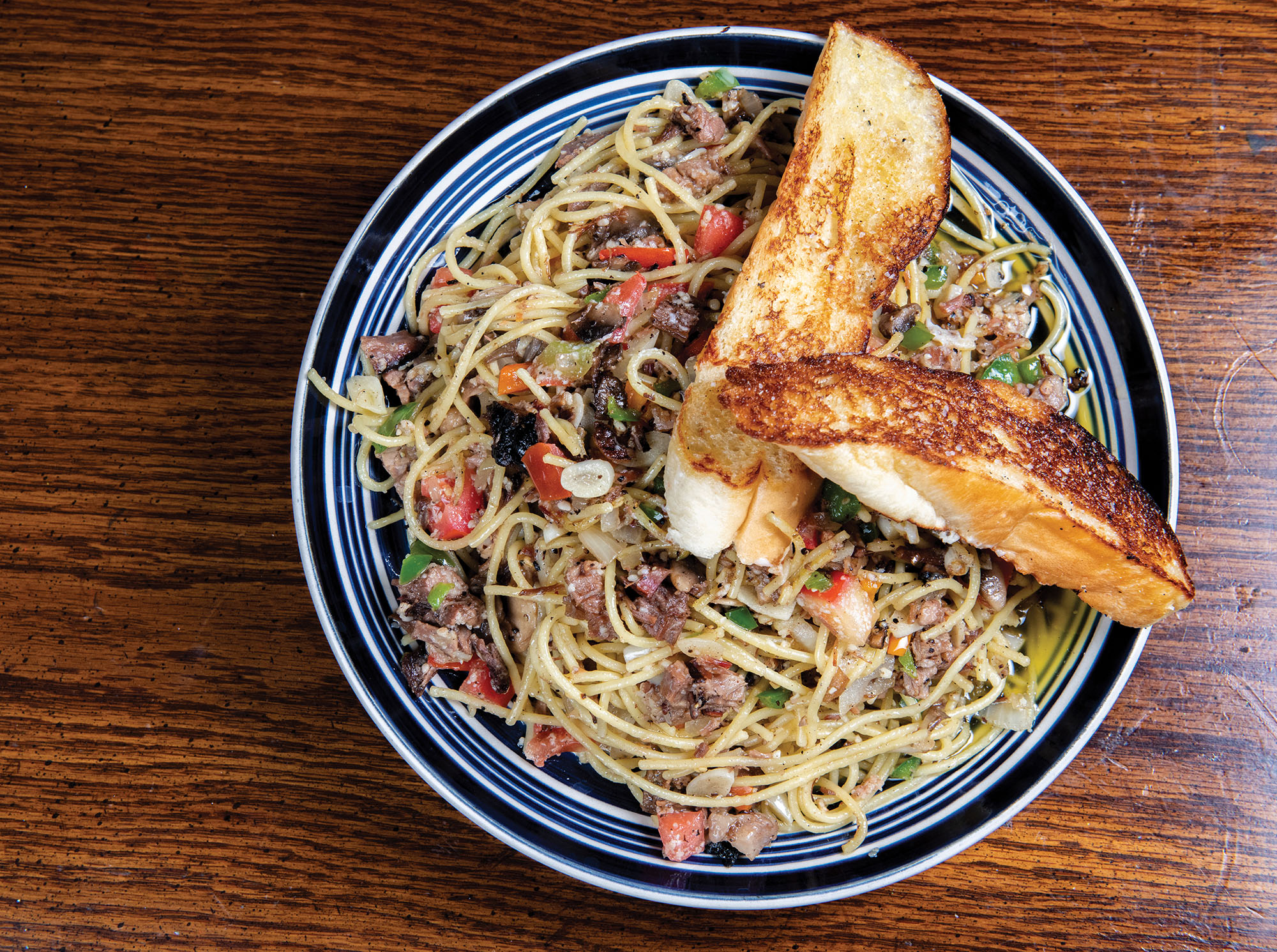 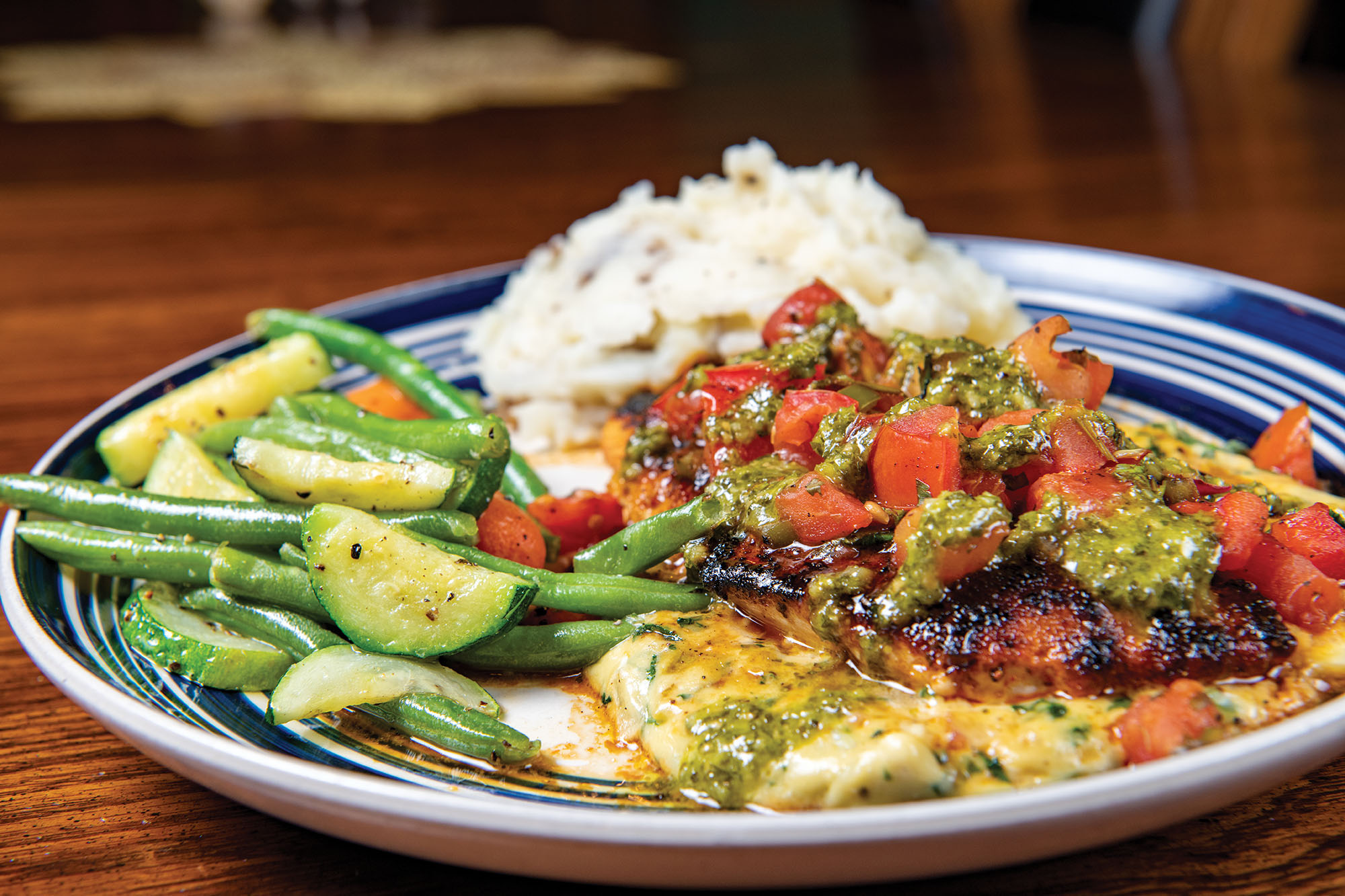 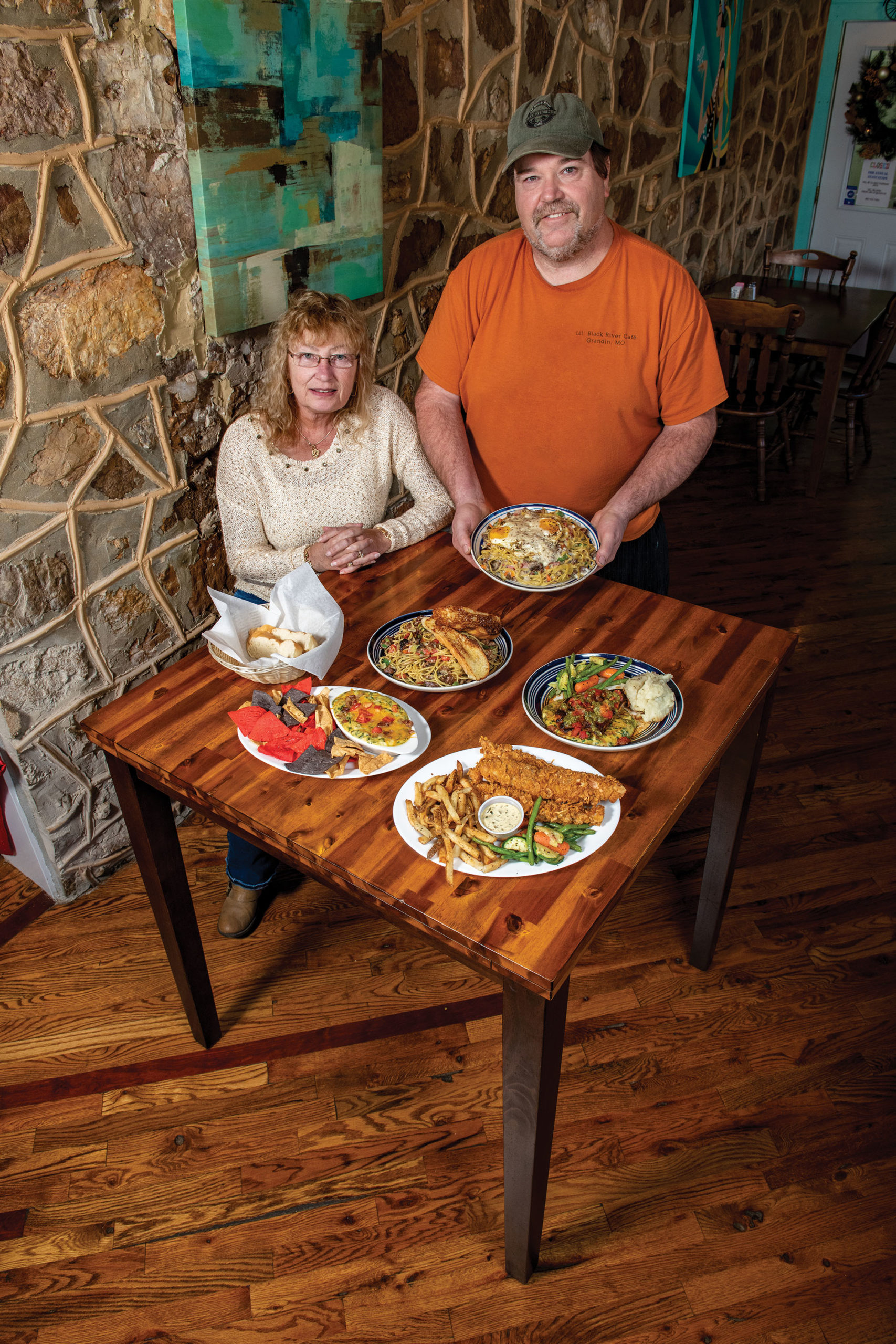 Not one to waste anything, Alan followed his culinary muse. Many of his signature dishes started with a little bit of something left over — some dip here or sausage gravy there — and evolved into one-of-akind entrees. The Blackened Chicken Breast was one such creation. Chicken breasts are grilled on top of Alan’s blackened seasoning and then served on a pool of the Spinach & Artichoke Dip. Pico de gallo and chimichurri sauce — made with cilantro, parsley, garlic, vinegar,
mustard, salt and pepper — are added to create a dish popping with color and flavor.

“It’s got a little sour from the lime juice, and the blackened chicken with the dip underneath mellows that out,” Alan says. “It’s creamy, but it has a bite to it. All the flavors marry well together. They match.”

One dish from Alan’s cooking career in Florida sees the staple catfish dinner served the way author Ernest Hemingway would have preferred. A trio of fillets are breaded in fl our and egg batter, then encased in a crust of cornflakes and almonds and fried. It’s a little different from the cornmeal breading most Missourians are probably used to, and Alan also uses it on grouper and mahi when requested. Catfish also can be ordered blackened, cornmeal breaded or beer battered upon request.

The chef can make just about any version of his special omelets and pastas with seafood, adding scallops, shrimp and crab meat. True to form, Alan takes a simple dish such as spaghetti a few steps further as well. The mountainous Italian Breakfast combines noodles with diced peppers, onions, mushrooms, tomatoes, bacon, ham and sausage. The towering feast is topped
with sausage gravy, eggs cooked to order and two pieces of garlic bread.

At least once a month the spaghetti can be ordered with local, slowsmoked brisket. The beef — along with the lamb and pork — is all grown and processed locally, and all of the beef at the Lil’ Black River Cafe is hung and aged 21 days.

“It has that smoky flavor of the brisket, and with the garlic and vegetables it’s not the norm,” Alan says. “I like to make things that are semi-normal, but a little different.”

At the top of the list of thing “not the norm” has to be the Burrito Lust: cheesecake and nut clusters are wrapped in warm tortillas, then topped with chocolate and caramel sauces and whipped cream. This special dessert pops up on the menu occasionally, but it never lasts long once hungry visitors know it’s available.

“We kind of have a saying, ‘big city quality at a small town price,’ ” Alan says.

Now the building which has at one time or another served some central function for the community — restaurant, bar, post office, gas station and convenience store, library, hair salon, meeting place for local Boy and Girl Scouts — once again finds itself the center of life in Grandin. Local businesses and church groups host parties and dinners inside, while diners from as far away as Memphis and Springfield make the drive to enjoy their favorite specials on the outdoor patio by the Little Black River. All the while, Alan is busy in the kitchen doing what he loves and, more than likely, creating something new.

“We don’t cook out of a box — that’s what I hear from a lot of people,” Alan says. “They come here for something different,
but we’re still homemade.”