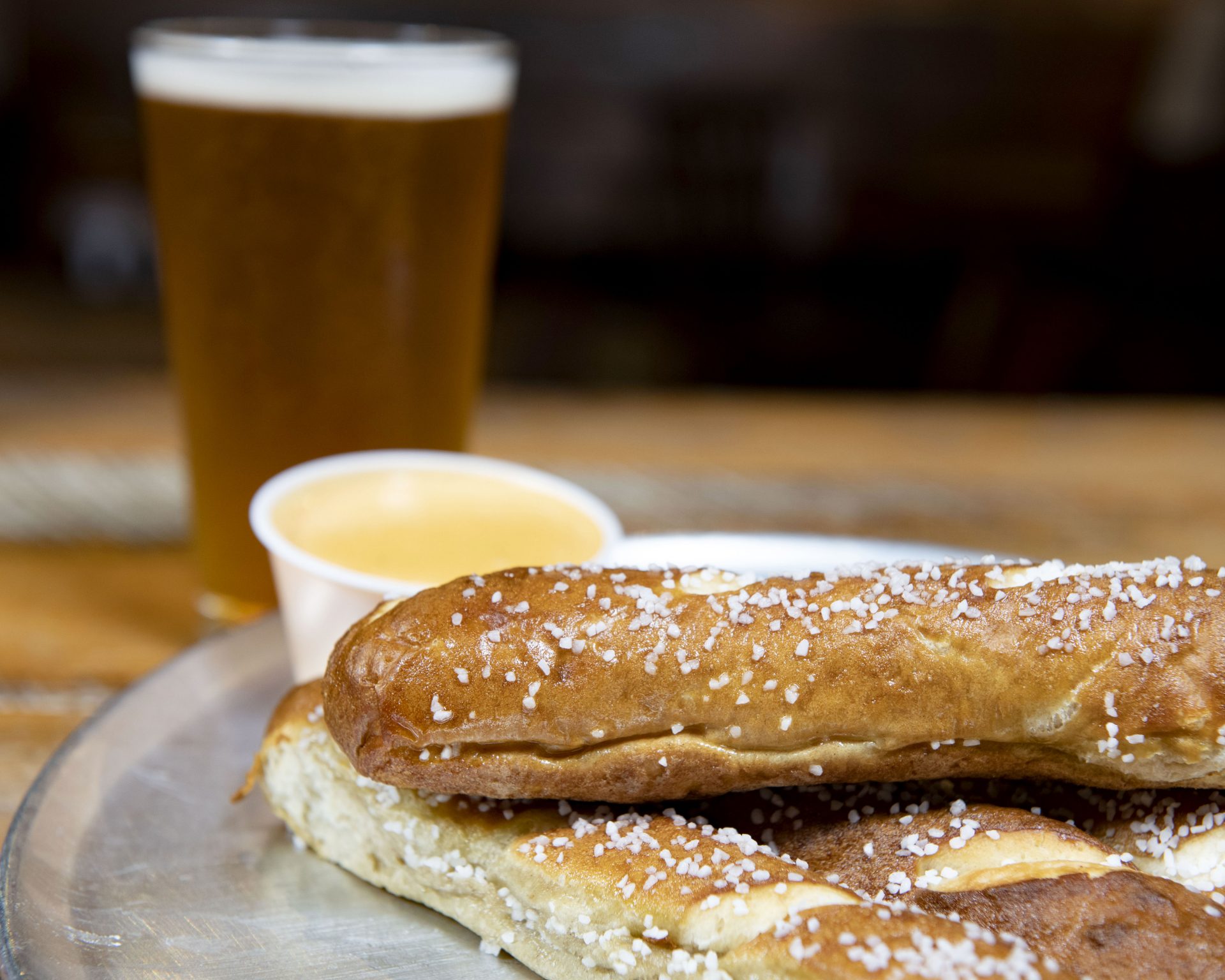 Pizza, pasta and pretzels in a unique brewpub

The journey to opening a brewpub began for Neil Wilkerson on his honeymoon to Breckenridge, Colorado more than three decades ago. It was his first time visiting and he and his wife patronized the newly opened Breckenridge Brewery. They were intrigued by the craft beer offerings that were so different from what they were used to.

“So fast-forward a few years and we’re living in Columbia and I saw in the Columbia Daily Tribune that you could buy a beer-making kit,” he says. “I skipped enough lunches to be able to afford it. I started making beer then, and it’s been a passion ever since.”

In 2018, Neil started pairing his signature brews with delicious pizza and opened Dubious Claims Brewing Co. in downtown Excelsior Springs. The restaurant is known for its variety of appetizers, sandwiches, pasta and specialty pizzas to accompany one of Neil’s craft beers on tap.

The name came from the claims businesses in Excelsior Springs were making about the healing ability of spring water in the 1940s and 1950s. Interested visitors from all over frequented The Hall of Waters in town to take in the magical healing powers of the spring water found there. As the popularity of mineral baths slowed down, a Kansas City Star editor wrote that the claims made in Excelsior Springs were dubious.

“We found that article at a local museum and thought it was the perfect name for our brewpub,” Neil says.

Dubious Claims was designed to be a place where no one is a stranger. General Manager Luke Adams says all of the brewpub’s food is intentional. “Our menu is simple,” he says. “We serve food that is meant to be paired with our great beer and shared among family and friends.”

That atmosphere’s roots go back to the days when Neil was perfecting his recipes at home. “Neighbor Neil” as he was known was a popular guy in his neighborhood as friends would stop by and try one of the 13 drafts he had on tap in his house.

Neil found the perfect location just one block from the historical Elms Hotel that features seating for up to 250 guests as well as a 5-barrel production facility allowing them to brew up to 150 gallons at a time.

With no deep fryer, nearly every item at Dubious Claims runs through their conveyor oven. They’ve got a handful of delicious appetizers, but Luke recommends any that comes with their beer cheese sauce, made in-house with their Kolsch. Specifically, the Bavarian Brewhouse Pretzels. The pre-pizza starter features four pretzels that are buttered and salted to order, take a trip through the oven and are served with beer cheese and ale mustard. Other options include nachos, garlic cheese sticks or the Wolf Hollow Wings with your choice of five sauces.

If you want to make sure you don’t leave hungry, try Skyla’s Mac & Cheese. Macaroni noodles are covered in the beer cheese sauce and topped with bacon bits, breadcrumbs, a cheese blend and baked in the oven.

“The mac and cheese started as an experiment and it’s kind of turned into a happy accident,” Luke says. “It comes in a huge portion and has really taken off. You can personalize it with chicken or any other ingredient off of our build-your-own menu.”

Pizza is the star of the show at Dubious Claims. “I think that pizza is the working man’s food and made for sharing,” Luke says. “The breadiness and the versatility makes it one of the ultimate food pairings for craft beer, especially malt forward beers that we specialize in.”

One of the most popular pizzas is The Full Keg, their take on a supreme pizza. The pie starts with marinara sauce spread over the 12-inch crust. It’s then topped with a proprietary cheese blend they source from Wisconsin-based Grande Cheese Co. Next come pepperoni, sausage, ground beef, black olives, red onions, green peppers and a final sprinkle of the cheese blend before going in the oven.

“It comes out nice and crispy on the edges but soft and doughy in the middle with all of your heated ingredients,” Luke says.

The owner is the namesake for the Neighbor Neil’s Choice, a meat lovers pie, and Christy’s Pizza features a garlic aioli base with grilled chicken, Italian seasoning, roasted tomatoes, onion, spinach, black olives and the Wisconsin cheese blend.

“Pizza was an obvious choice for us here because it pairs well with beer and we didn’t have anything like that in the business district of Excelsior Springs,” he says.

Other unique options include the BBQ Pizza and Taco Pizza, Luke’s favorite. The BBQ Pizza starts with a base of sweet barbecue sauce topped with your choice of chicken or brisket, red onion, roasted tomato, bacon bits and the cheese spread. Before heading out for service, the pizza receives a raspberry barbecue sauce drizzle. The Taco Pizza features a base of refried beans and beer cheese sauce along with ground beef, onions, black olives and cheese. After it comes out of the oven it’s topped with crumbled Nacho Cheese Doritos. 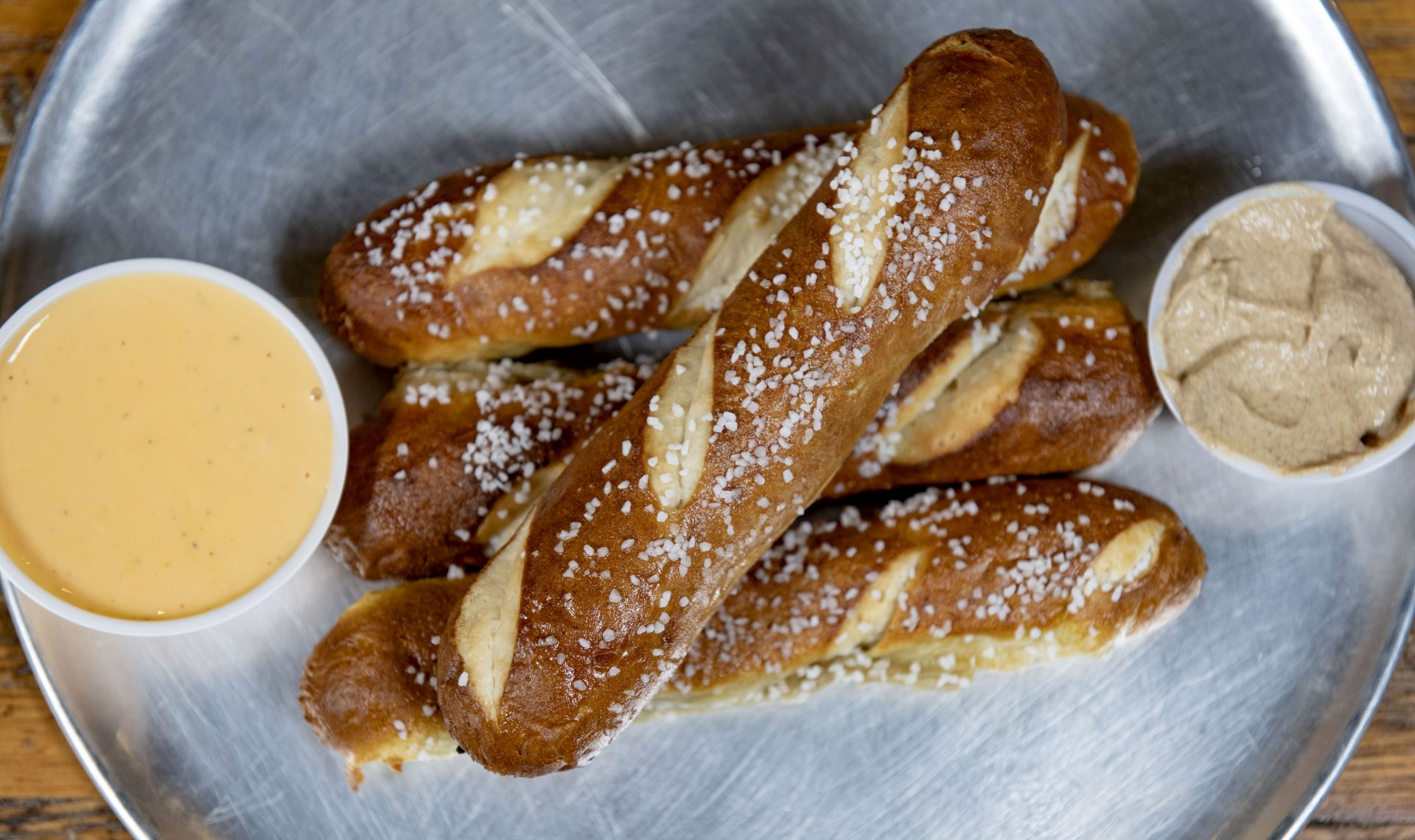 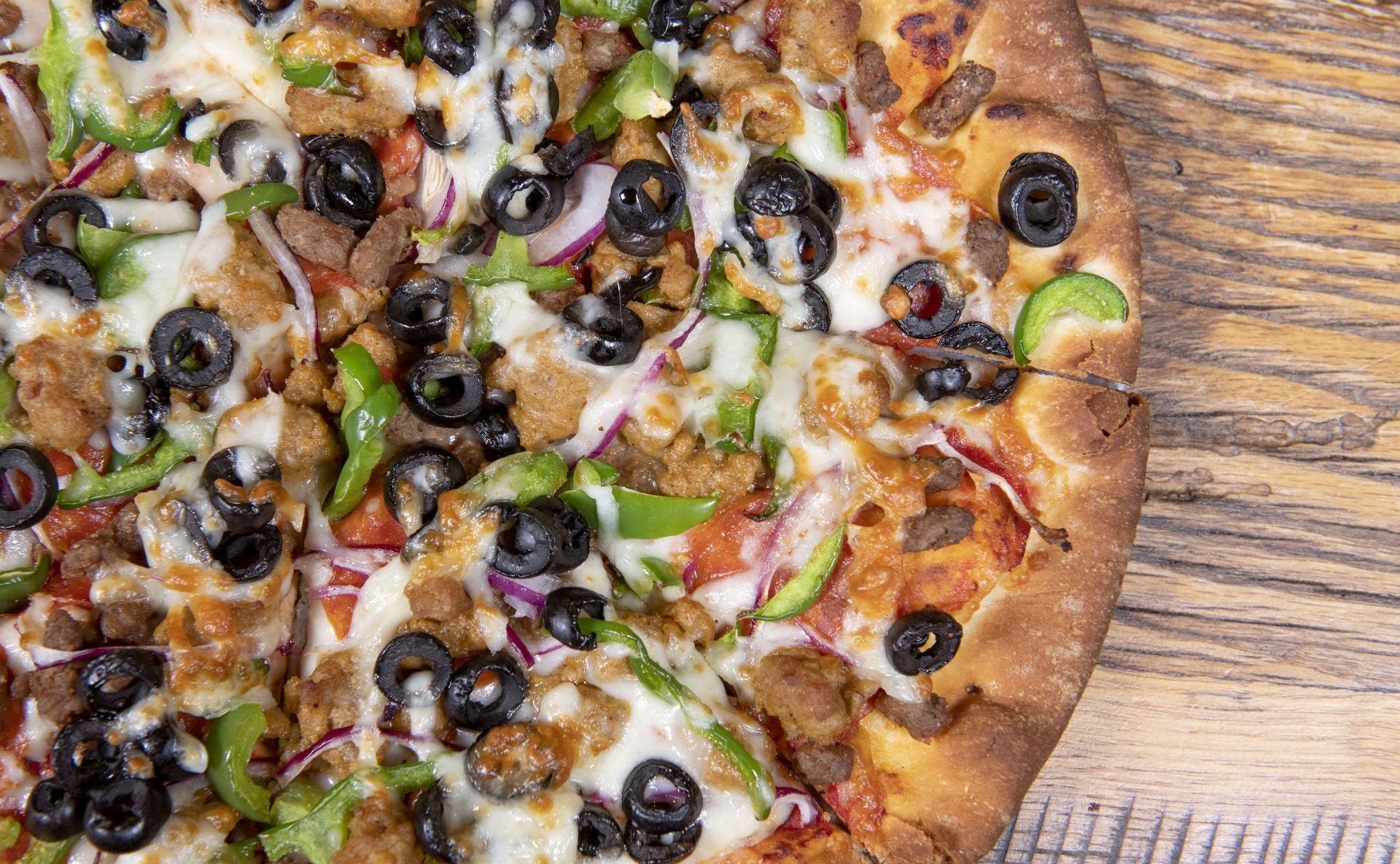 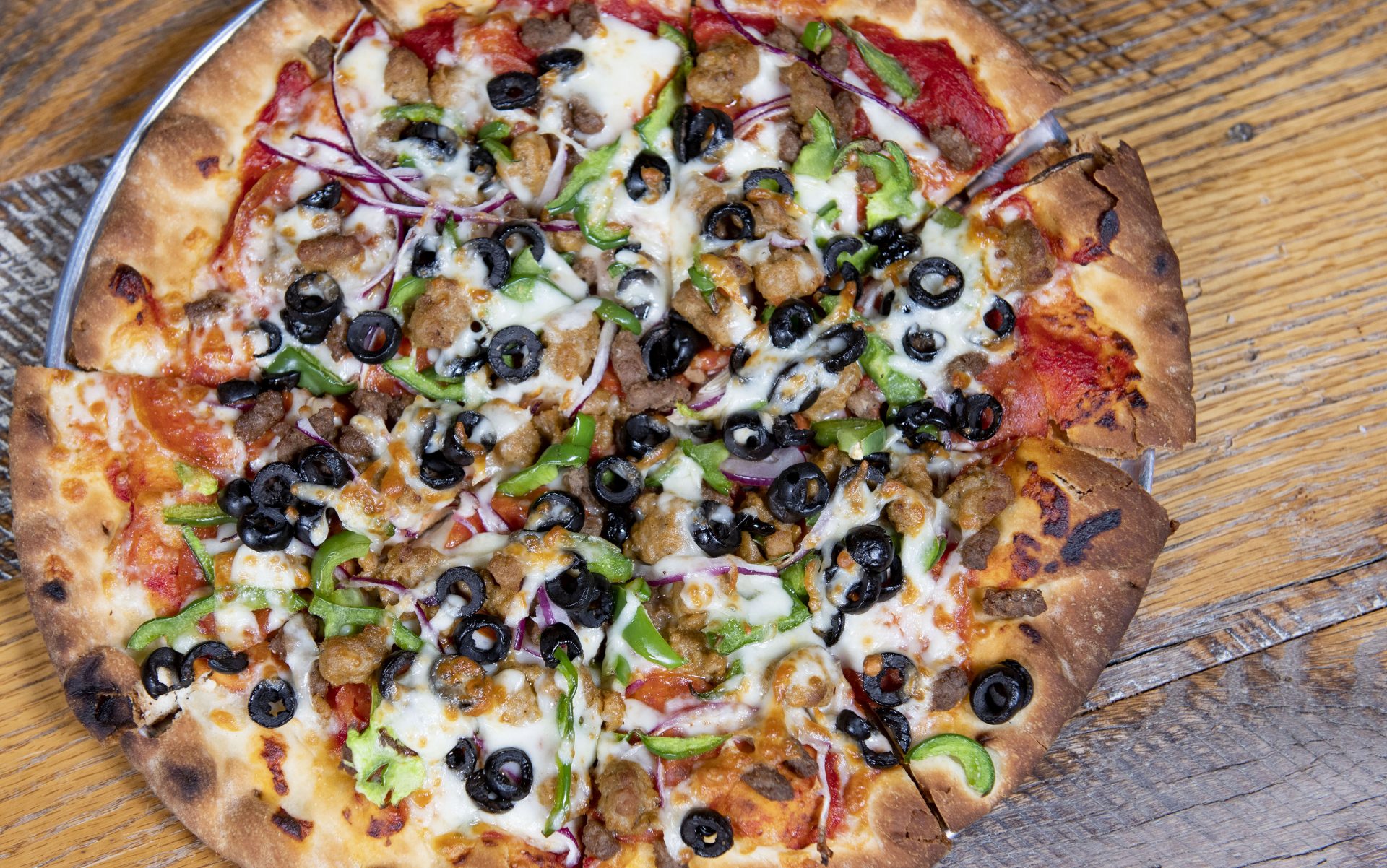 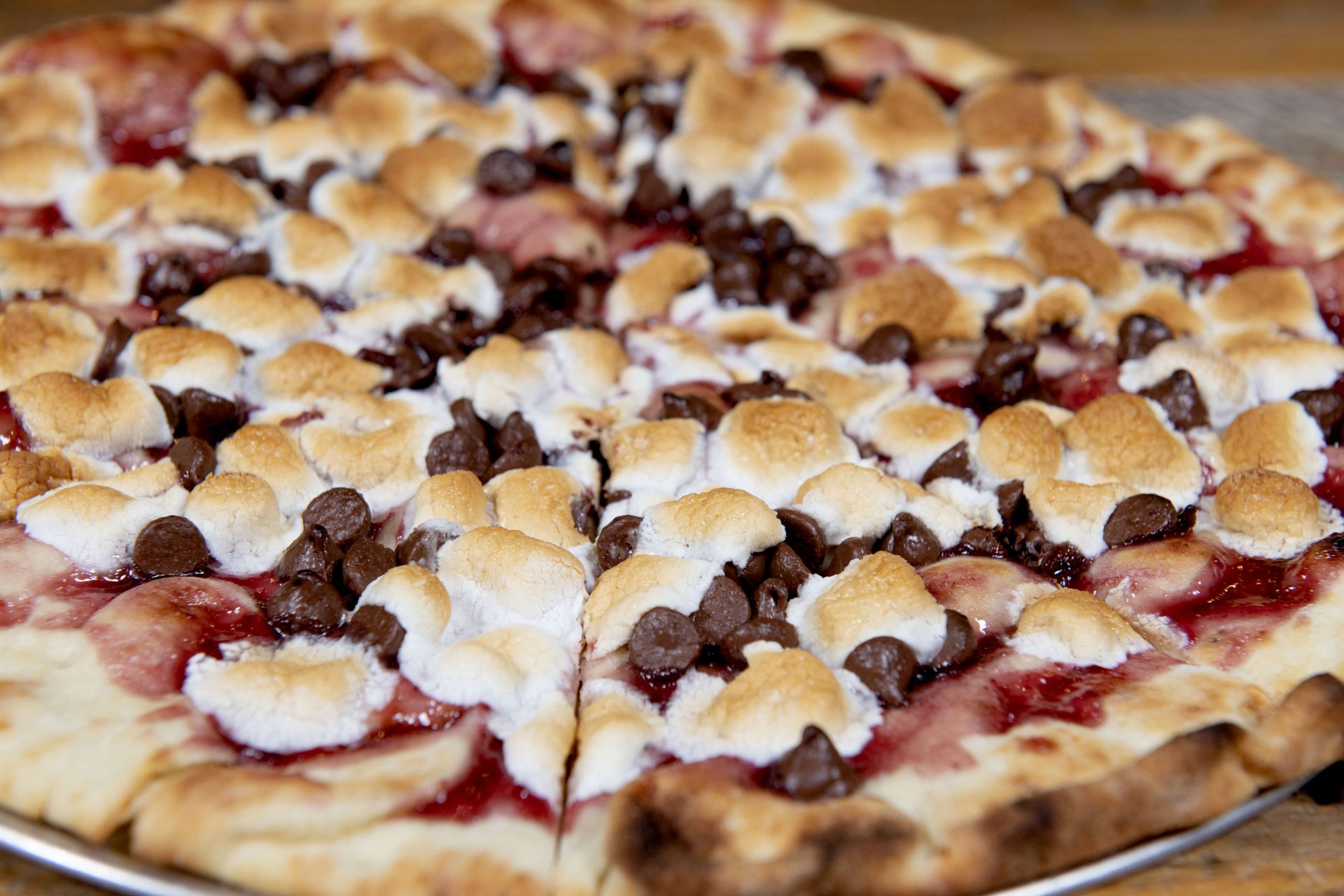 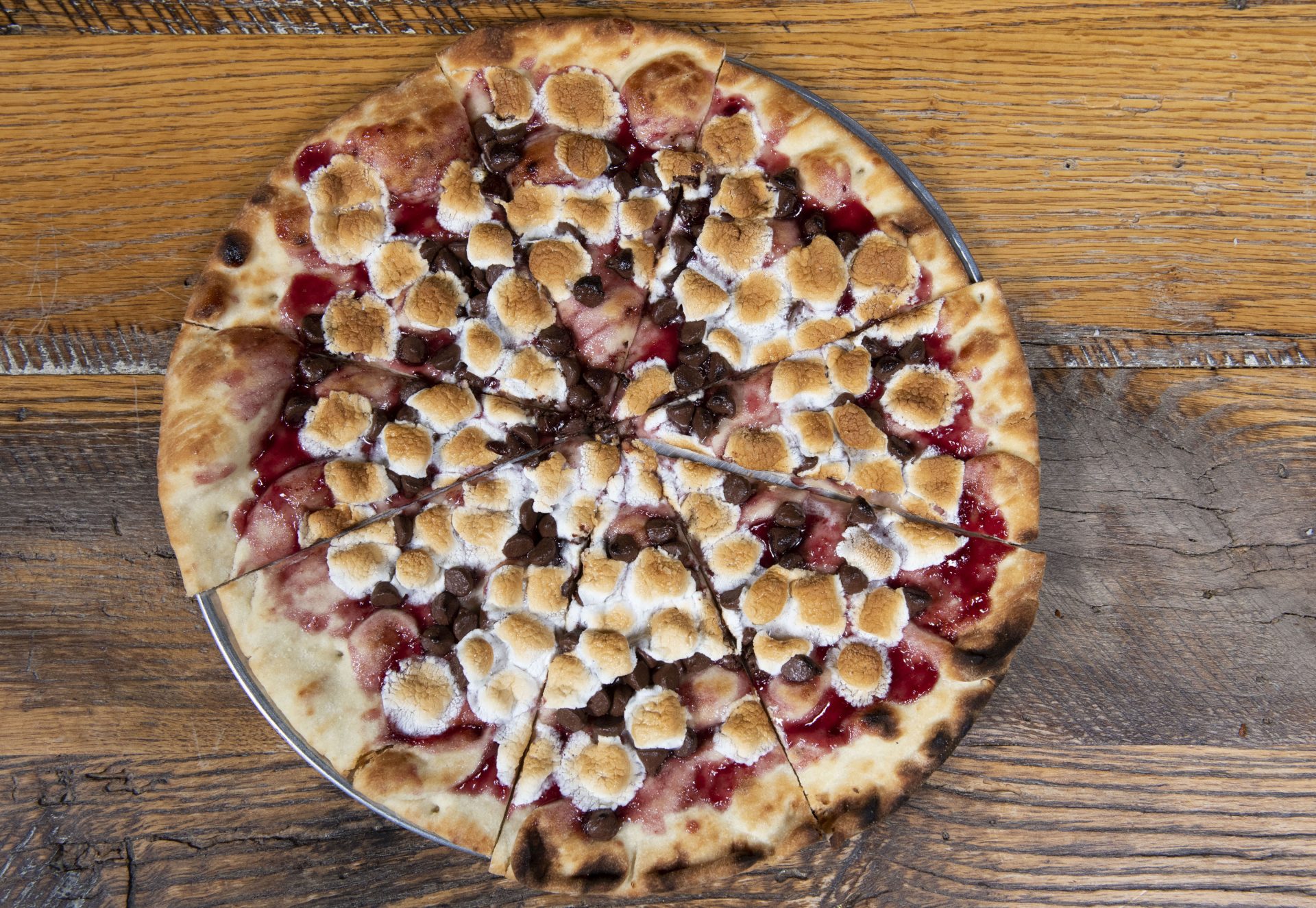 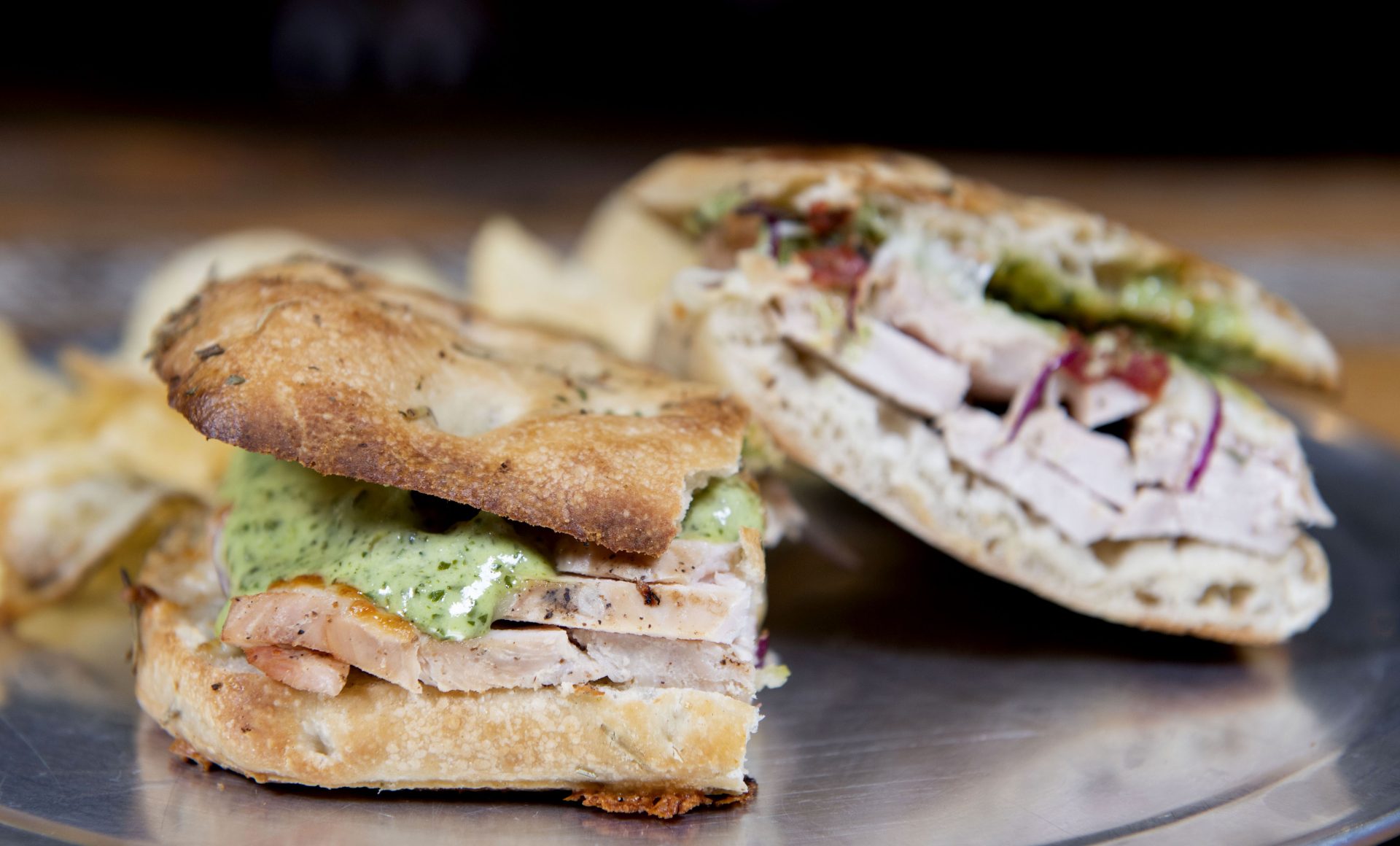 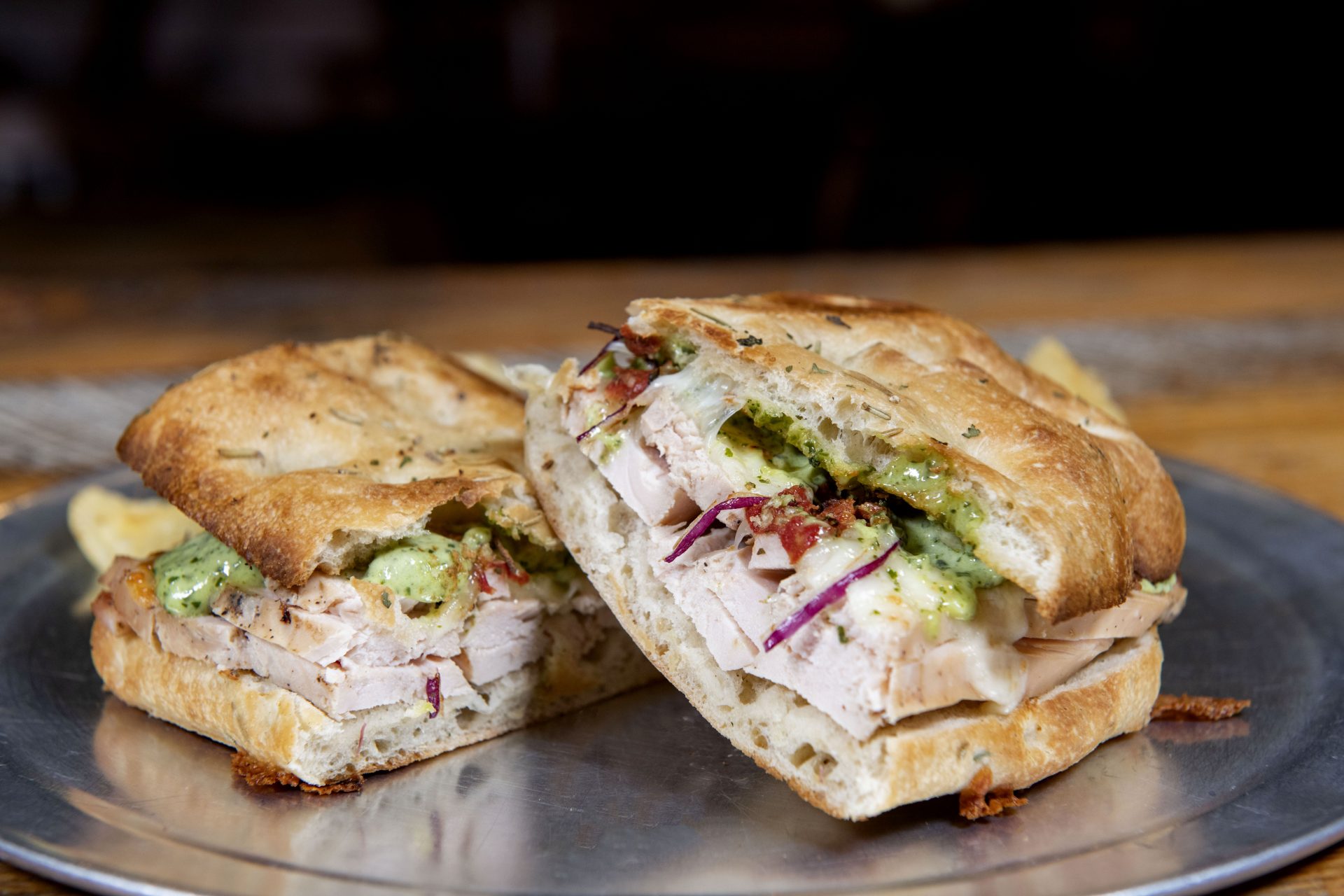 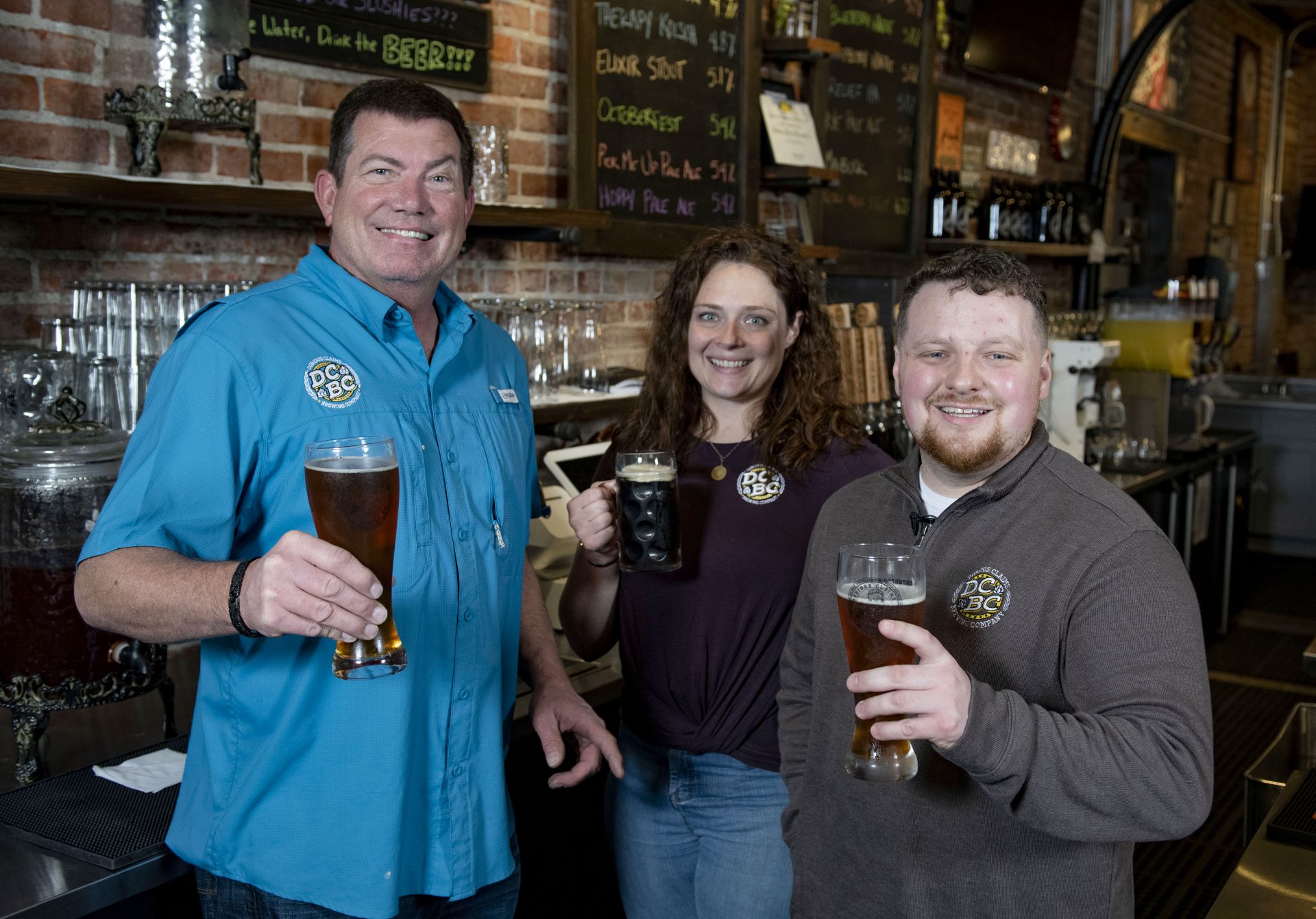 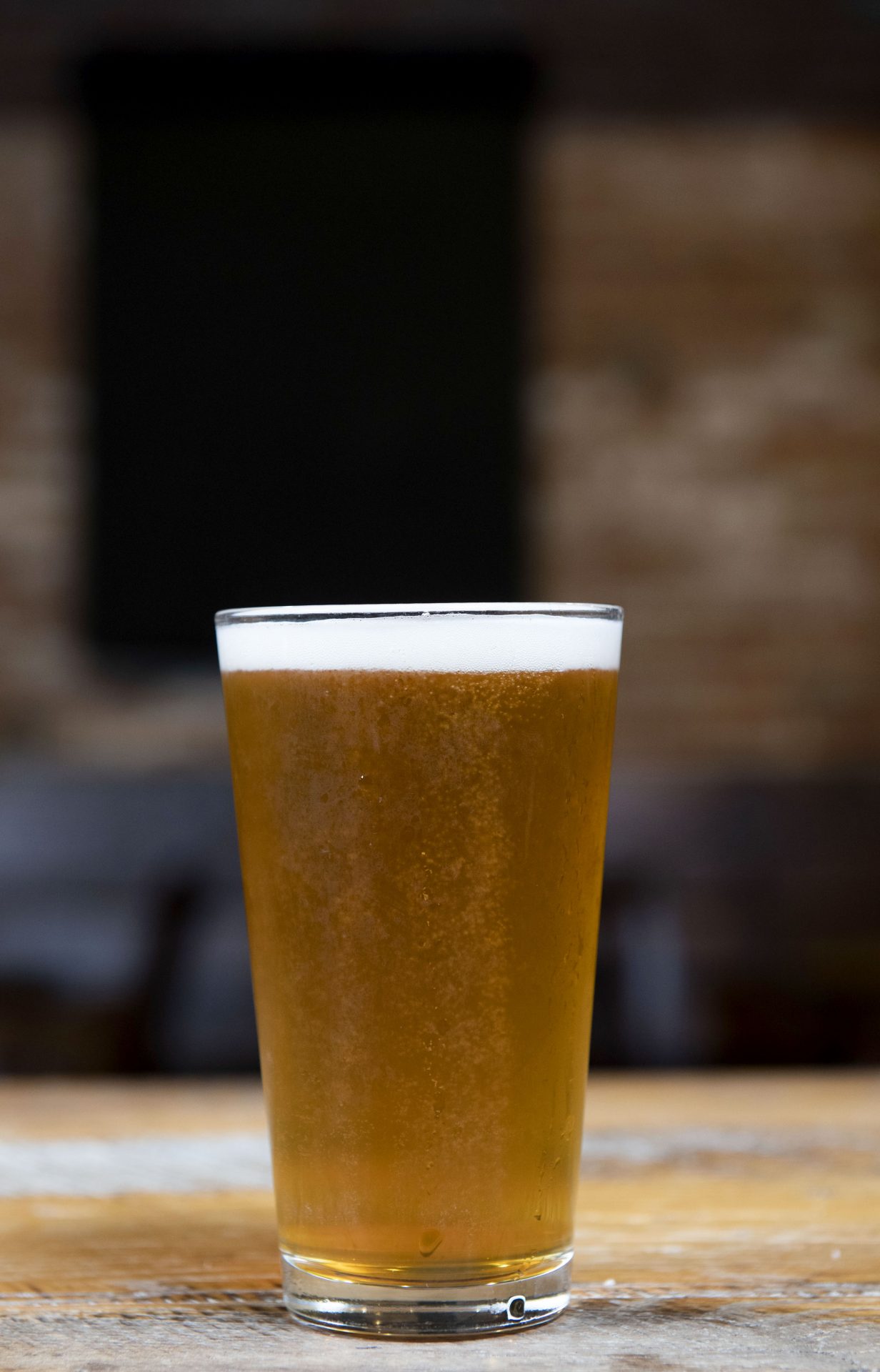 If you want your dinner between two slices of bread, you can order the Final Gravity Sandwich. Grilled chicken, roasted tomatoes, red onion and their cheese blend are placed on rosemary bread and toasted in the oven. The finishing touch is a pesto aioli on the hot sandwich.

“The rosemary bread is a thicker cut and when it comes out of the oven it has a nice crunchy feel to it,” Luke says. “With the chicken and tomato it gives you a variety of texture.”

If somehow you’re still hungry after your meal, try one of Dubious Claims’ newest menu items: Regent Raspberry Dessert Pizza. Their 12-inch pizza crust is spread with a Melba raspberry sauce, chocolate chips and mini marshmallows that puff up and turn golden brown as the sweet creation goes through the oven. “It has a nice tartness and sweetness to it,” Luke says. “It’s a nice, fluffy, filling dessert that’s nice for sharing.”

Whether you stop by to try one of Dubious Claims’ hand-crafted beers — the Blueberry Wheat is the most popular — or devour some of their mouthwatering fare, you’re sure to enjoy yourself.

“We produce this awesome beer right here at this facility,” Neil says. “The food we have is amazing and you can check out all that Excelsior Springs has to offer. You won’t be disappointed.”