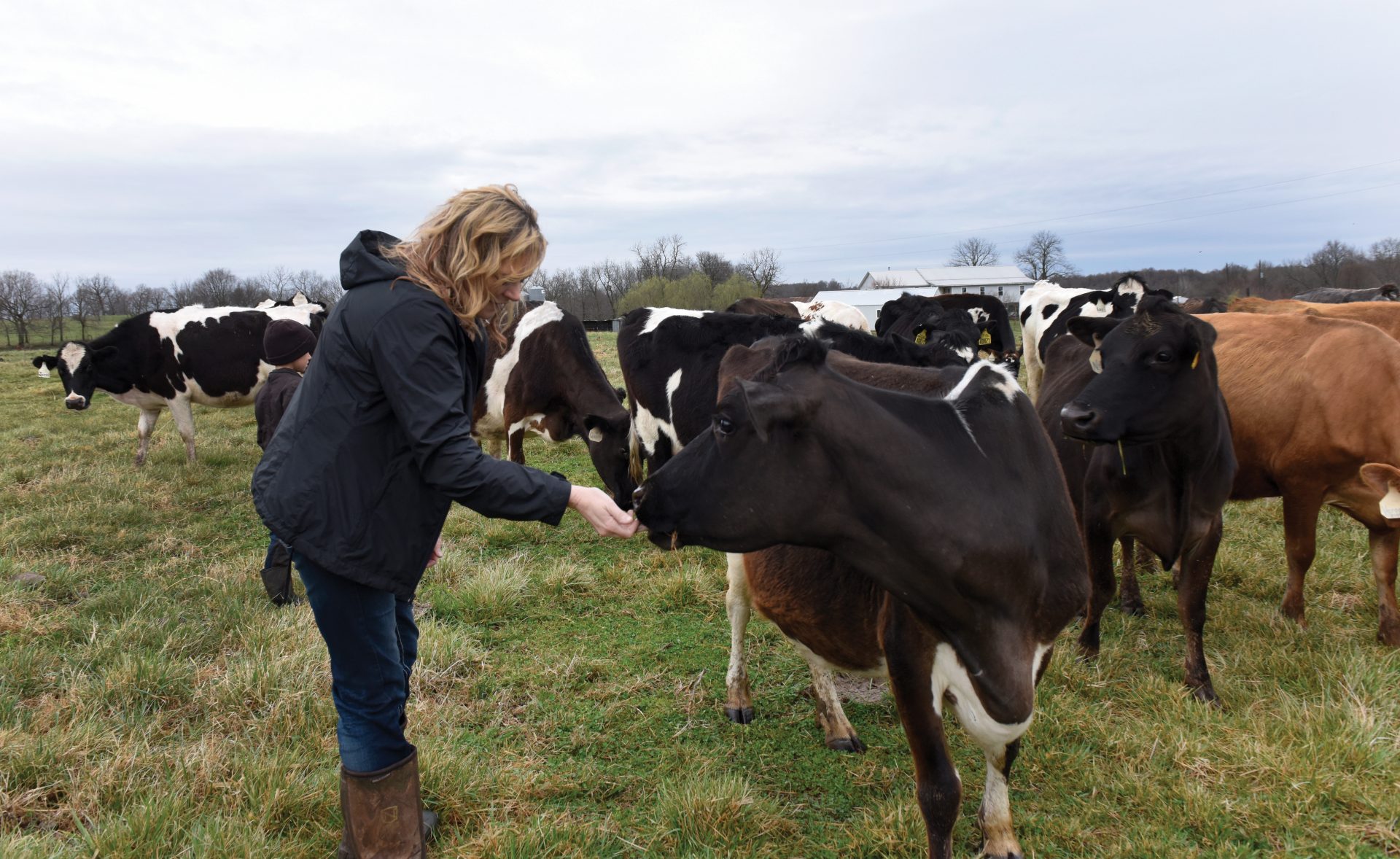 The dull clang of a cowbell rings in the spring breeze. While cowbells used to help farmers locate their cattle, these bells chime as the employees of Edgewood Creamery arrive to start their day.

When Kelli Stephens purchased Edgewood Creamery in Purdy from longtime dairy farmers Charlie and Melissa Fletcher, cows were not new to her. She had raised replacement heifers for multiple dairies for several years. Coming from a family of farmers, Kelli came to the creamery business with a well-rounded skillset.

In 2017 the Fletcher family decided to sell the business. “I couldn’t bear to see the creamery close so I bought it,” Kelli recalls.

At that time, she was running nearly 500 beef and dairy cattle on her own.

So Kelli reinvented the creamery business, contracting with local dairies for the milk she now uses to create a delicious line of artisan cheeses and more.

“My kids were getting older and I knew I couldn’t manage all that and run a creamery too, so I sold most of my herd and began working with nearby farmers who were willing to raise the cattle the way I required,” says the Barry Electric Cooperative member. When she’s not at the creamery, Kelli teaches educational psychology at Crowder College in Cassville.

The cattle are on rotational grazing systems which is good for the cattle and the land. Every 12 hours the animals are moved to a fresh pasture of grass, allowing the cows to eat the most nutritious grass possible for milk production.

“I pay a premium and the dairy farmers provide a premium product,” says Kelli. “By working together, we’re able to help many families stay on the farm, which is a win for us all.”

She and manager, Michael Nash, stop by the contracted dairy farms weekly to check on herd health and milking conditions.

“The cows have to be fed a certain way so our milk will produce the froth desired by coffee shops we sell to,” Kelli adds. “Attention really is in the details in this business.”

These days, the creamery is all about bottling milk and making handcrafted cheese. Their line of cheeses is well known in southern portions of Missouri and northern Arkansas and gaining popularity with gourmet and farm-to-table eateries. Edgewood Creamery’s cheese line includes their signature Ozark Mountain blue, sharp and mild cheddars, farmhouse original and fromage blanc (a cream cheese) in Plain Jane or Milk and Honey flavor. Their regular or jalapeno cheese curds also are popular. 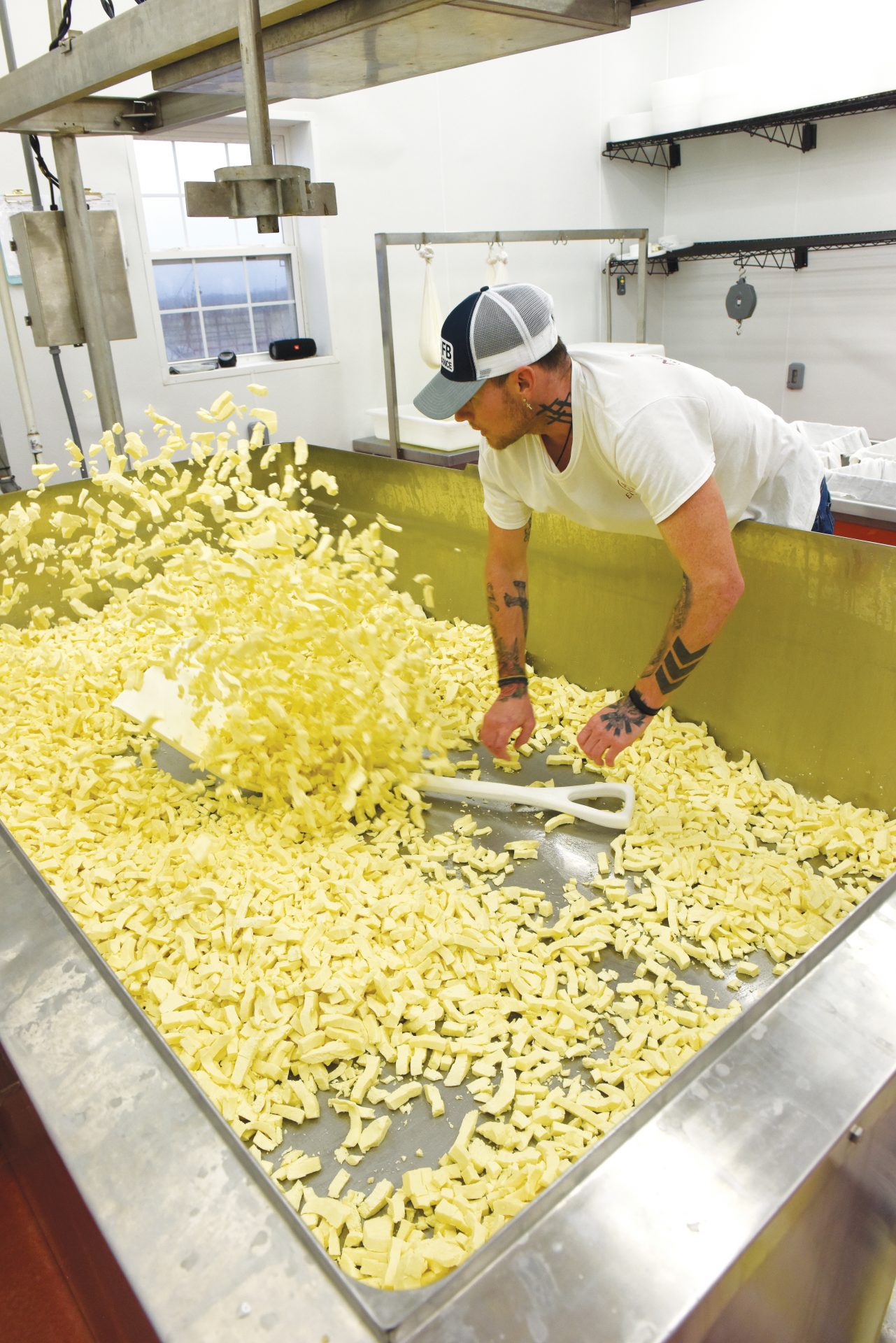 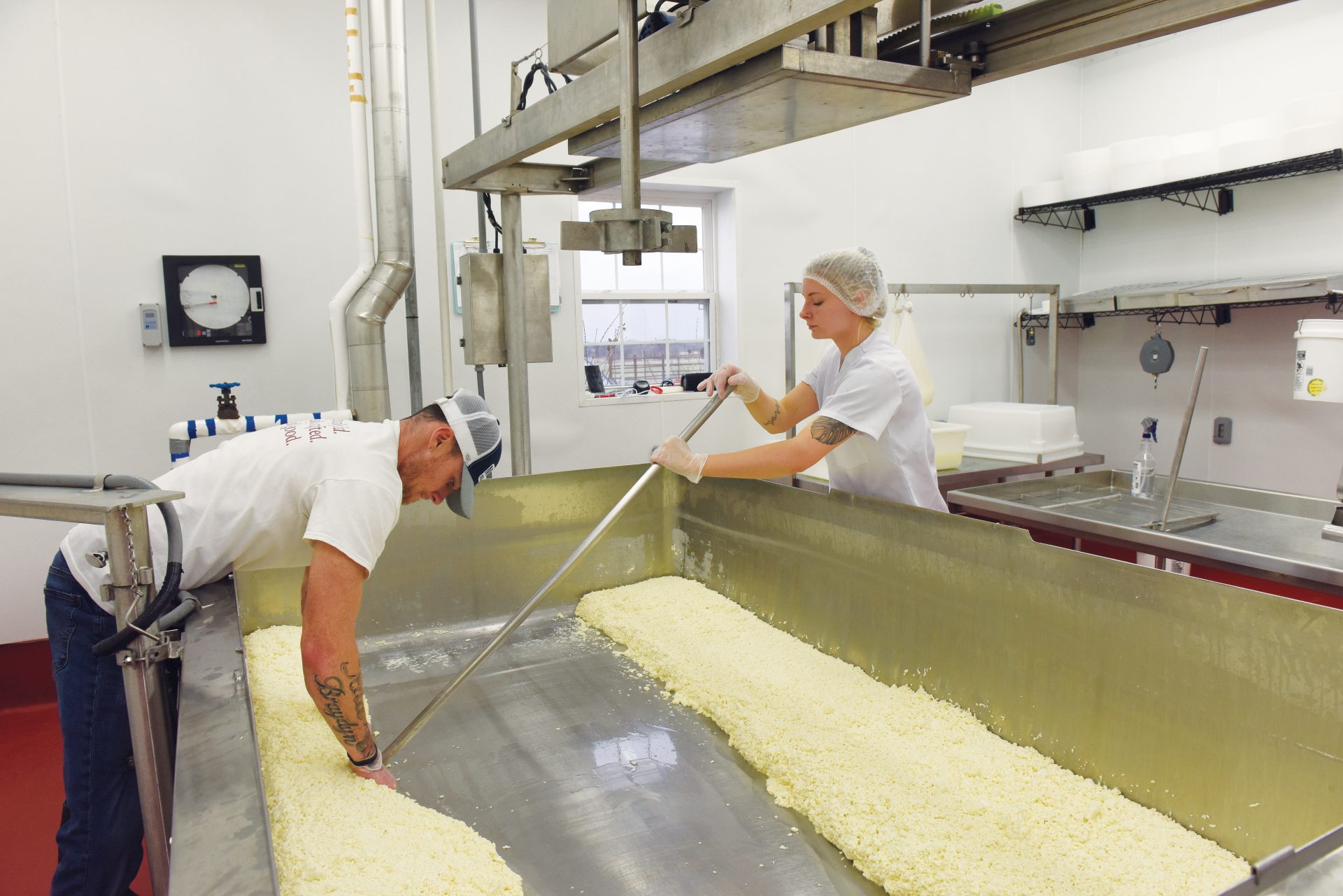 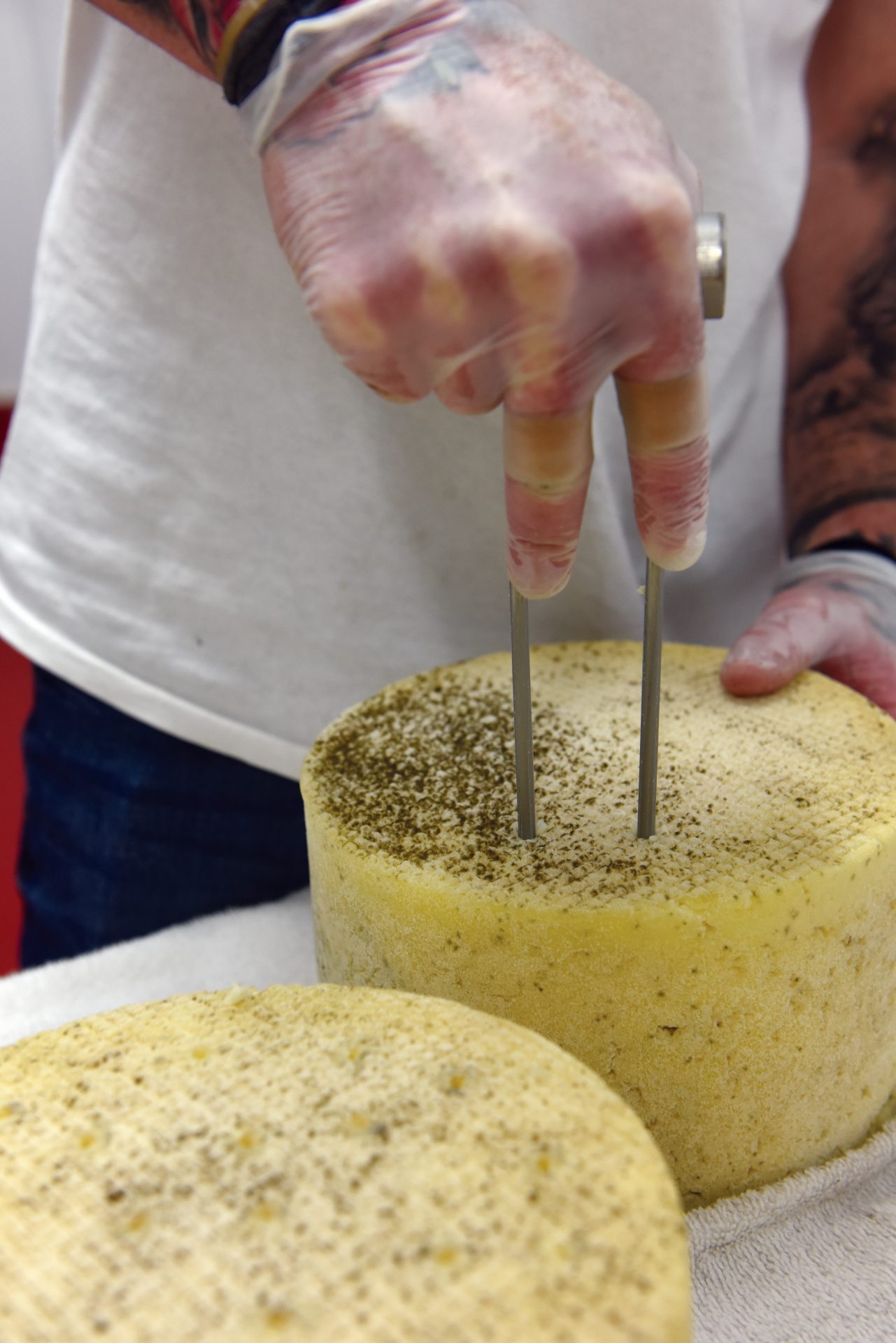 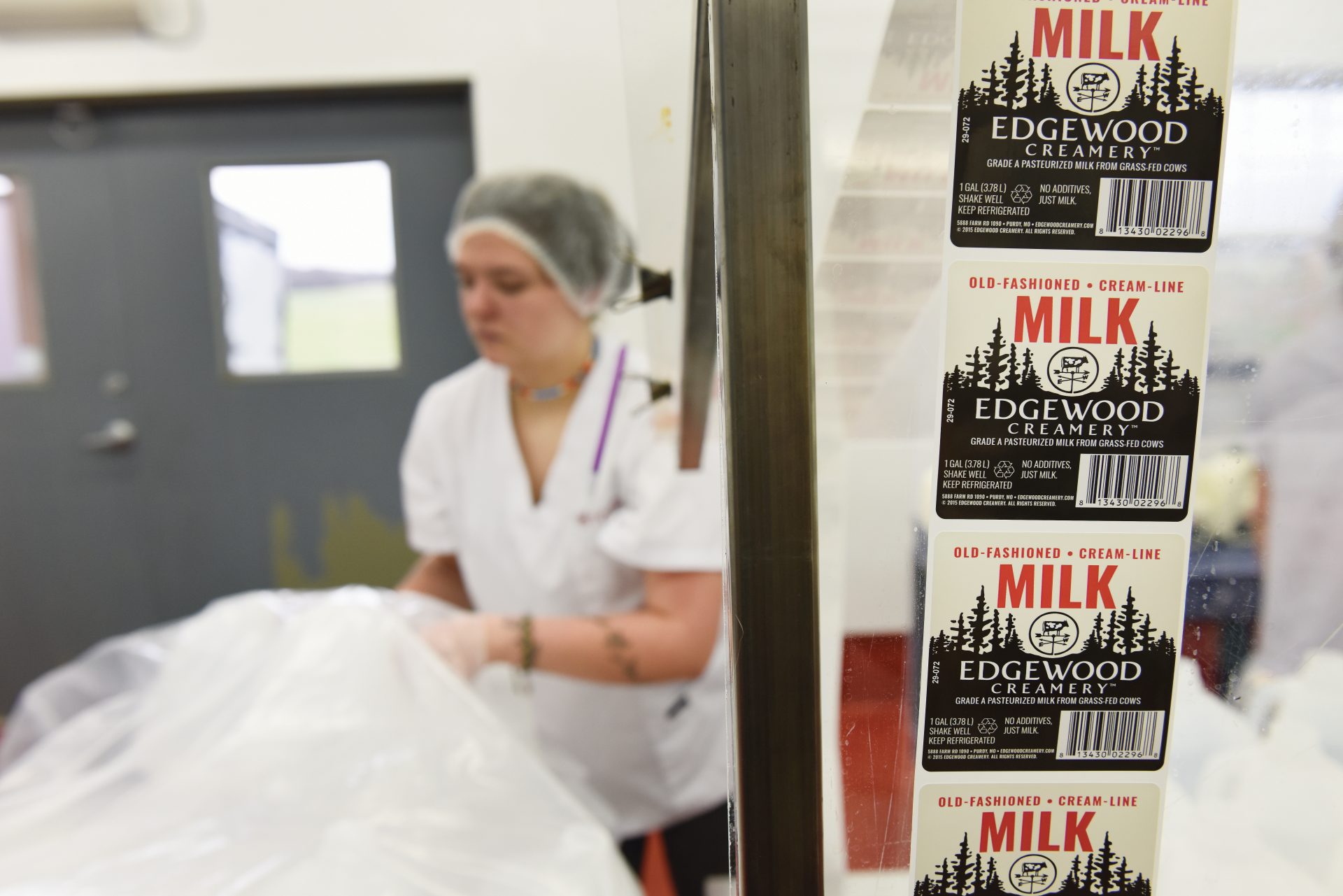 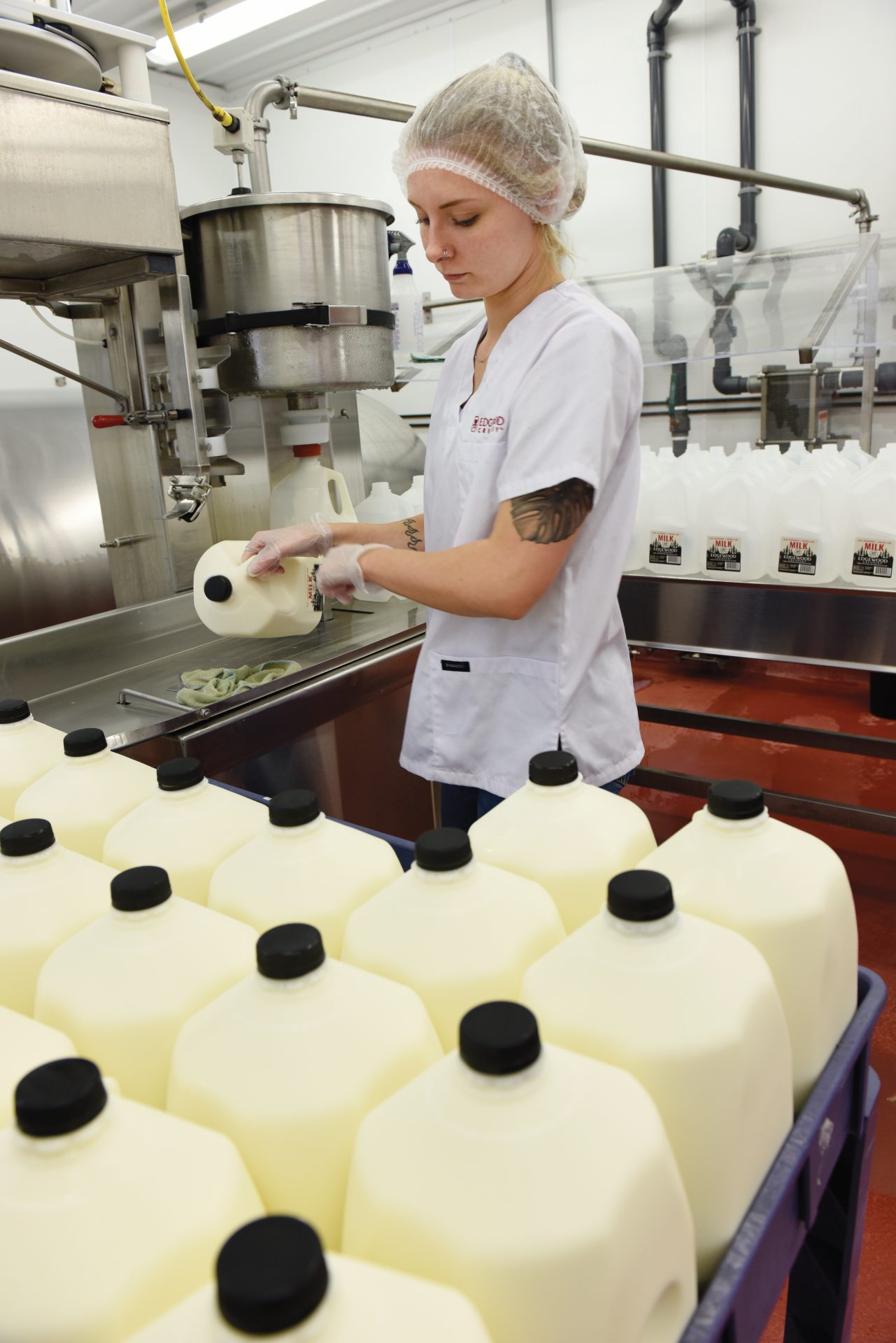 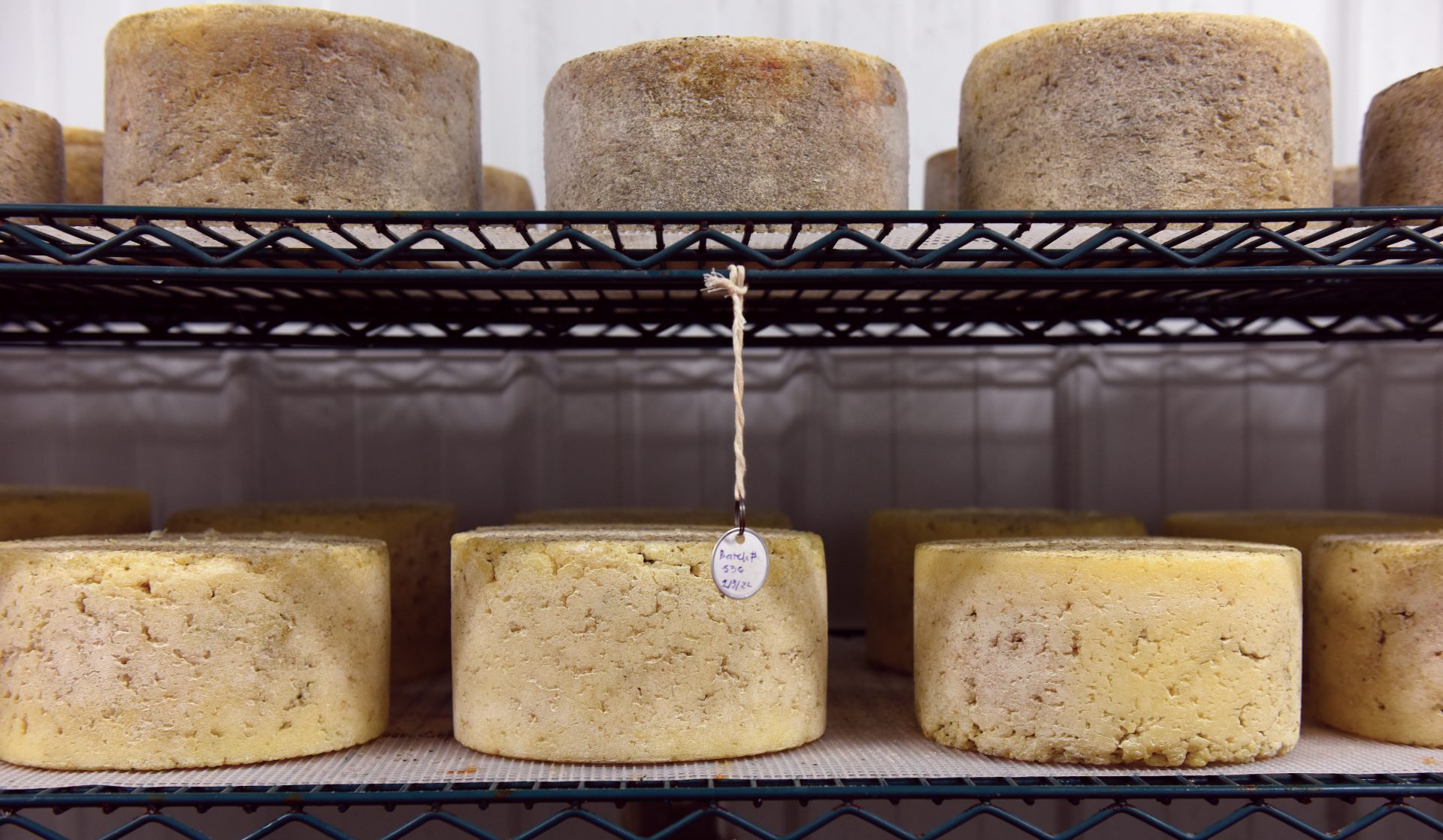 A typical day at the dairy includes collecting the milk from the dairy farms, then pasteurizing and preparing it to make cheese or bottle for sale.

Today, cheese curds and hand bottling milk is on the schedule. For the cheese curd process, milk is poured into a large stainless steel vat, with enzymes added and slowly heated to get the pH levels correct for the cheese. After the machines stir for hours, curds begin to form as they separate from the liquid. Once most of the liquid is gone, Kelli and the staff squeeze excess liquid out, then slice the solid mass of cheese into large slabs.

The cheese is then stacked in the stainless steel vat so any remaining liquid continues to drain. When ready, the slabs are run through a curd slicer. As the curds cure, dairy workers toss them to make sure they’re salted evenly. Then the curds are weighed and packed into stainless steel, cheesecloth lined forms and hand packed and pressed overnight. Then they’re ready for vacuum sealing and labeling.

One main distinction with Edgewood Creamery’s milk is that it isn’t homogenized like most milks consumers can purchase at the store. It’s also hand bottled.

Homogenization is the step after pasteurization when the fat is blown up into a smaller size and stays suspended in the milk. Edgewood Creamery’s milk is made with a minimal amount of processing, allowing them to offer a healthier nonhomogenized milk.

Another thing which makes Edgewood Creamery’s dairy varieties unique are the type of cows they use to make their milk and cheese. Part of the dairy cows they milk offer A2A2 genetics. This choice makes the creamery currently one of the only ones in the region to offer A2A2 milk in addition to regular milk.

“Some of the cows we milk have been genetically tested to make sure they have only these proteins in them,” says Kelli, then quickly follows with, “You’ve heard of heirloom seeds? A2A2 cows are heirloom cows.”

The A2A2 milk is a game changer for those people who are lactose intolerant. The milk is collected in separate bulk tanks to make sure there isn’t cross-contamination.

“There’s actually not a lot more money in this for us, but we want to look out for our end customer. This is one more option we can offer to those who might not have been able to enjoy dairy before,” says Kelli.

According to the dairy owner, you won’t taste any difference between regular and A2A2 milk. But she does say Edgewood’s milk tastes sweeter and creamier than most because the cows are grass fed and the milk is vat pasteurized. Kelli says it doesn’t cause inflammation for most people because it closely mimics mother’s milk.

“It’s pretty amazing when someone starts to cry when they tell you that they’ve never been able to enjoy milk before they tried our A2A2 line,” Kelli says of their products, which are part of the Buy Missouri program.

There are plans to expand the creamery in the future and add items such as bottling machines and possibly offering heavy cream and butter. But for now, Kelli and her nine employees are churning out the milk and cheese as fast as possible.

“We’re processing about 2,000 gallons of milk alone each week,” says Kelli. “That’s a lot when you’re doing it by hand.”

Customers can purchase Edgewood Creamery milk and cheese at Hy-Vee, Price Cutter and Mama Jean’s Natural Market and Deli in Springfield. You’re also welcome to stop by the creamery’s small storefront, if you happen to be out in their area during the day. There you’ll also be able to purchase locally grown beef raised on nearby Five Holler Farm, owned by her sister and brother-in-law, Kegan and Mark Terry.

“We’re really just harvesting sunshine, which makes the grass grow, which the cows eat,” says Kelli. “And that quality goes into althe products we make here at Edgewood Creamery.”

To contact Edgewood Creamery, call 417-442-3010 or email sales@edgewoodcreamery.com; www.edgewoodcreamery.com. The creamery is located at 5888 Farm Road 1090 in Purdy. Small group tours are available when booked in advance. This is one of nearly 500 Missouri companies that are part of the Buy Missouri initiative overseen by Lt. Gov. Mike Kehoe. To find Missouri-made products or to enroll your business visit www.BuyMissouri.net.