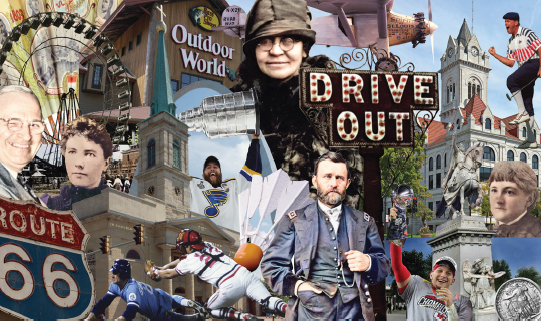 Book reveals 200 years of Missouri’s past

Plenty of books have been written about Missouri’s history. But none are quite like the new one written by John Brown, a TV news anchor for KTVI in St. Louis.

“Missouri: An Illustrated Timeline” com-bines common themes of Missouri’s statehood with little-known facts about obscure Missourians who contributed greatly to the nation’s progress.

The lavishly illustrated coffee-table book was timed for Missouri’s 200th birthday in 2021 says its author, who grew up in Belle but has lived in 20 Missouri towns.

“It all started with my ﬁrst book, which is ‘Missouri Legends,’ about 10 or 12 years ago,” John says. “I started keeping a list of the famous people from all these towns I lived in. That list grew and grew and turned into a book. This is the next extension of that book to put into context what those people did.”

John’s biggest challenge was deciding what went in and what was left out from the thousands of historic events and fascinating people. “We tried to balance it not only in the timeline format but also in regions of the state,” John says. “So some things got left out simply because we wanted to include historical moments from other parts of the state.”

One of the events left out was the 1918 Spanish Flu pandemic. “I wrote that story but left it out because it was at the same time as the troops returning from World War I,” John says. “Now we realize it was a bigger deal than maybe we thought because we are going through it again.”

While longtime Missourians already know the story of Missouri’s most famous natives, such as Harry Truman, Mark Twain and Walt Disney, newcomers will be amazed at how many inﬂuential Ameri-cans hail from the Show-Me State. But all readers will love learning about the unheralded Missouri residents. For example, most Missourians probably have never heard of Mayme Ousley, who went door to door ask-ing women for their votes just two years after women won the right to vote. She won the St. James mayoral election by eight votes, becoming Missouri’s ﬁrst female mayor.

“Of all the places in the state of Missouri I think it surprises people that the ﬁrst female mayor of a city was in St. James,” John says.

Montgomery City’s Charles Leiper also lives on in the pages of the book. In 1929 he unveiled a drink called
“Bib-Label Lithiated Lemon-Lime Soda.” Today we know it as 7Up.

Missouri ﬁrsts abound in the book. Did you know the ﬁrst drive-thru restaurant opened in Springﬁ eld? Or that eight-track tapes, LEDs and Twitter were all invented by Missourians? And that the ﬁrst Masters golf tournament was won by a Missouri man?

Great sports teams get their moment in the spotlight in the book. One story tells about the 1942 Subway Series played between the St. Louis Cardinals and St. Louis Browns, while the 1985 Royals vs. Cardinals I-70 Series is recalled in another. John says that entry was the book’s most controversial, with the Cardinals wanting the emphasis placed on a certain missed call and the Royals wanting the focus on their Game 7 blowout. 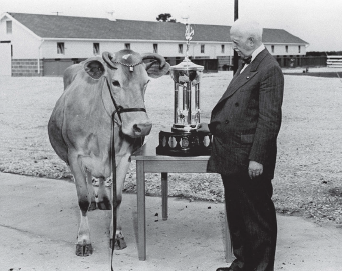 J.C. Penney is one famous Missourian who is part of the book. He is shown here with one of his prize-winning cows raised at his farm in Hamilton.

The book’s sports moments include the Stanley Cup hockey championship by the St. Louis Blues and the Kan-sas City Chief’s Super Bowl victories in 1970 and 2020.

The author doesn’t gloss over Missouri’s tragedies in favor of its triumphs. Included are riots in Kansas City, St. Louis and Ferguson. Floods in 1951 and 1993 share space with the Civil War burning of Carthage, the Gasconade River bridge disaster and the Joplin tornado of 2011.

The book’s timeline begins with Missouri’s quest for statehood and ends with the upcoming 2021 Missouri Bicentennial. It leaves the reader feeling proud of the place we call home, small towns, big rivers, urban centers, historic homes and towering skyscrapers.

“Missouri: An Illustrated Timeline” is the latest book of its type from St. Louis-based Reedy Press, which specializes in making history readable. With short and easy-to-read stories, its books have great appeal for a generation more used to online reading. Yet they offer fascinating glimpses into topics that will have readers saying, “I never knew” over and over again.

Other offerings from Reedy Press include “The Missouri Almanac 2018-2019,” “Historic Missouri Roadsides” and “Secret Route 66.”

John Brown’s other books can be found on his website at www. missourilegends.com.