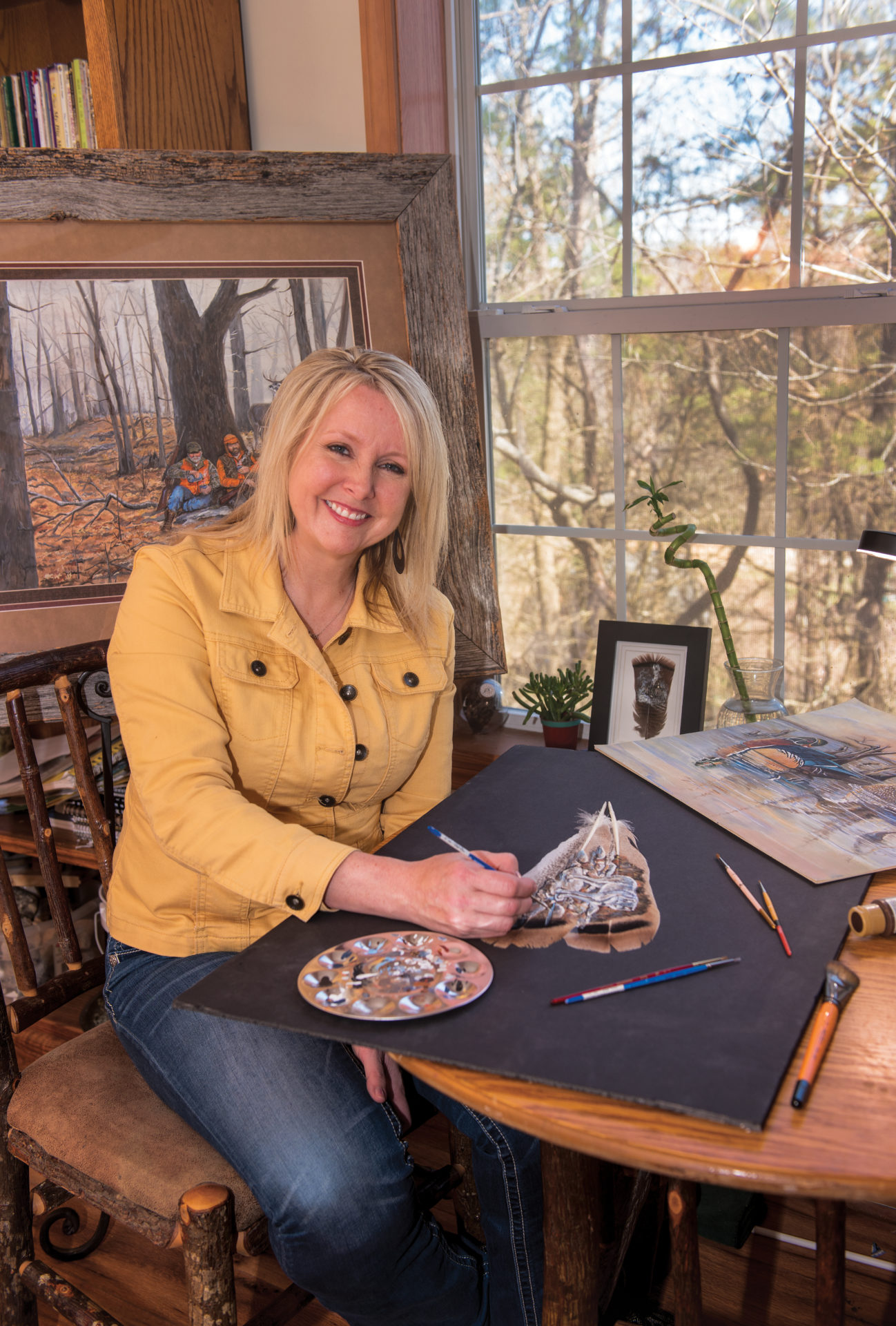 Her brush looks like one most people would throw away, with its scarce long bristles pinched into the metal base. To use it would be a bit like painting with a blade of grass, but for Tina Richards, it’s perfect for the tiny world she brings to life.

Amazingly enough, a decade ago the Hollister real estate agent didn’t paint at all. She saw a woman painting on feathers at a Branson festival and couldn’t get over the beautifully detailed artwork. 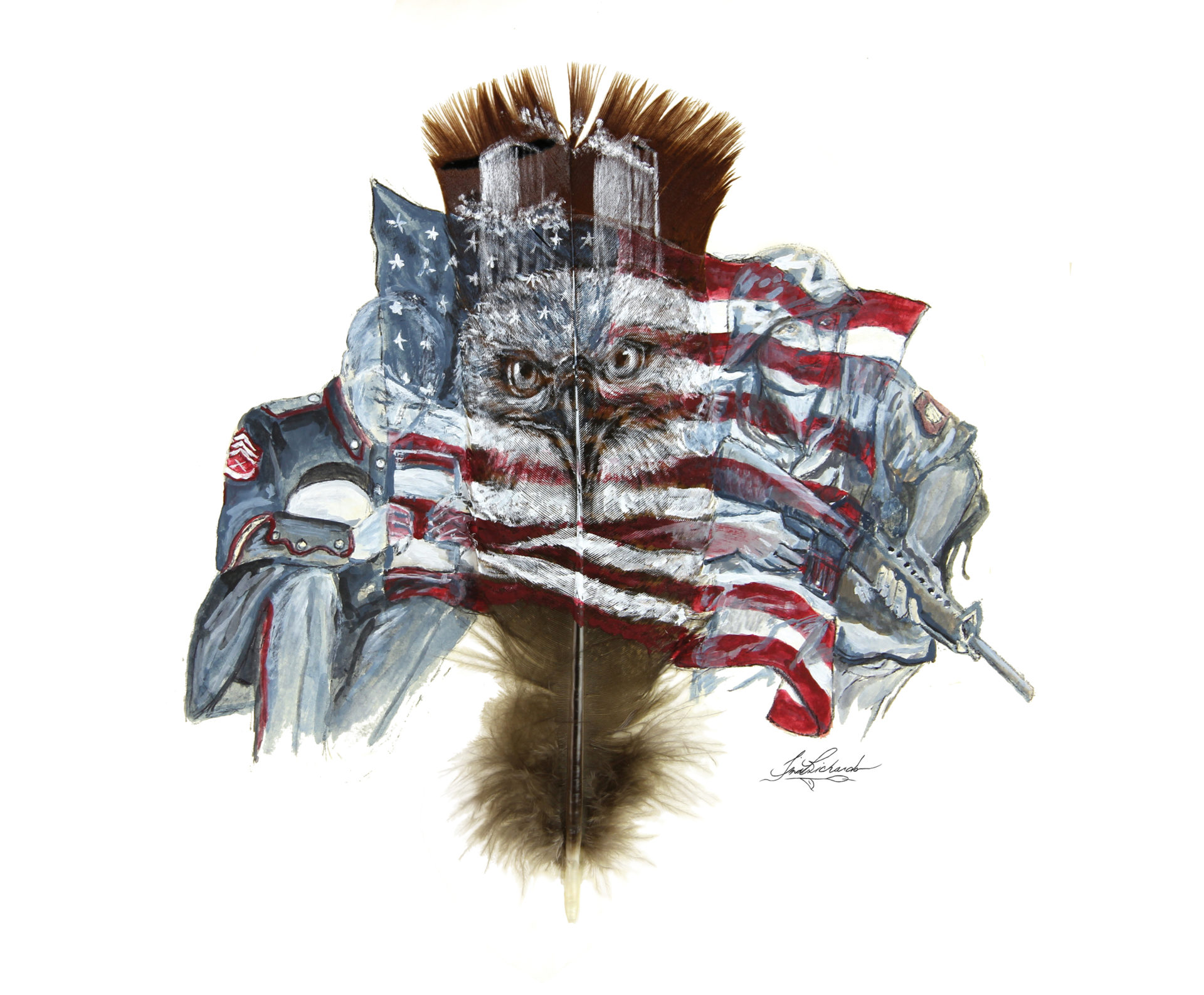 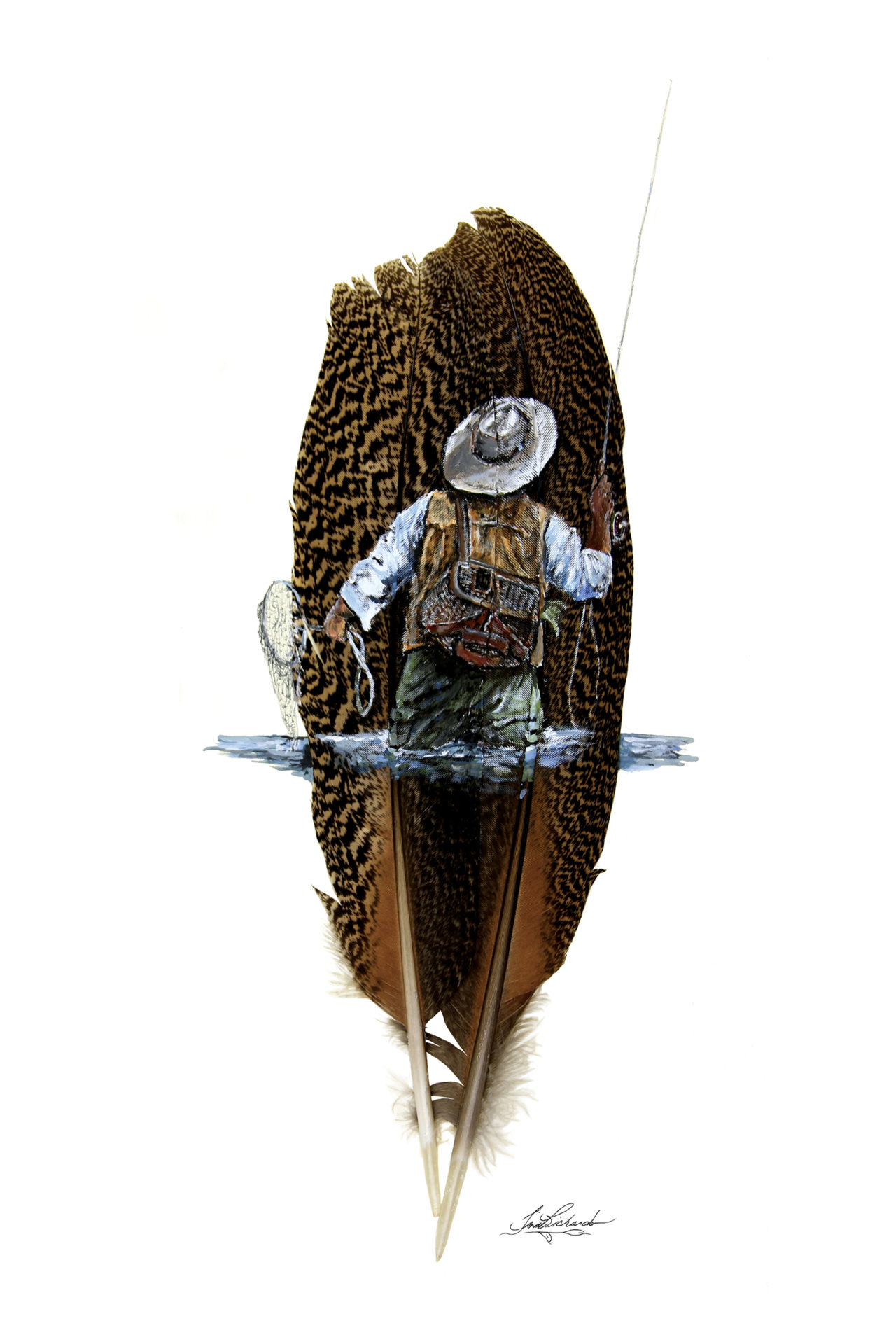 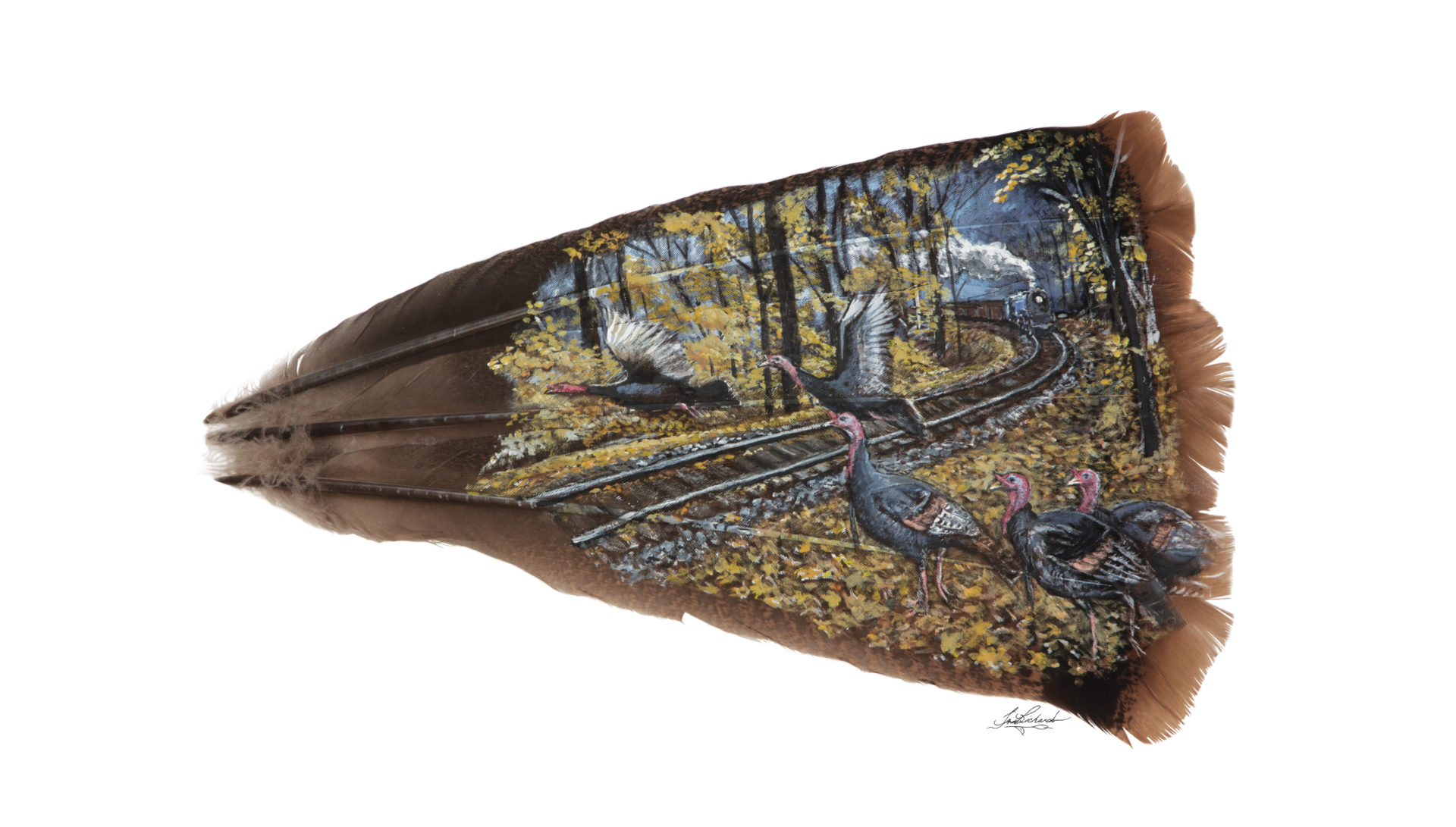 She shared the conversation with her husband, Eric, then began her search for feathers. Armed with acrylic paints and brushes, Tina began outlining a little red fox on what would become her first painting.

“Within a year I was painting an entry for the Ducks Unlimited Missouri competition. Then someone at Silver Dollar City called and invited me to paint during their fall festival,” Tina says, noting this fall will be her ninth year painting at the park.

Her Ducks Unlimited entry — a painting of two hooded merganser ducks in water — garnered her first big win in 2015.

Through the years, Tina has perfected her technique through trial and error. “You learn things like what glue to use and how feathers do or don’t take paint. You create some pretty rough stuff sometimes. It takes a lot of patience,” she says.

The artist says you can’t paint on any feather you find. “You can only use feathers from birds you can legally shoot or legally raise,” Tina says. To do otherwise is breaking federal law. She often purchases her feathers from reputable online sources or taxidermists.

Tina says a few dots of paint can sometimes last for an entire feather painting. “Acrylics are easiest to work with because they’re forgiving as you work,” she says. It can take as few as eight hours or up to two weeks to complete a detailed painting according to Tina.

An image can be a small work on a single feather or a large illustration  painted across several feathers which have been joined together before Tina begins painting. Sometimes an image is painted partially on a feather, overflowing onto the backdrop. Other times an image might include several likenesses within a painting.

“I call those the ‘Where’s Waldo?’ paintings,” says Tina, smiling. Some of her most popular prints have a military theme and often include several depictions within one main work.

The White River Valley Electric Cooperative member says she’s been blessed to enter and win the regional Ducks Unlimited competition as well as painting at several of their events. A customer once told her she should enter the wildlife conservation contest for the state of West Virginia, so she did, and won, twice.

“I’m still amazed at how all this began,” says the humble artist, noting she’s had no formal art training.

While she’s created a few canvas works, feathers are her primary medium. Prints created from her original feather paintings begin at $20 while original feathers can run into the thousands of dollars. Her matted and framed Ducks Unlimited original sold at Silver Dollar City during one fall festival making her one of the highest-paid artists to ever work at the park.

When she’s not painting, selling real estate with her husband or fishing with their three children, Tina represents the area as Mrs. Branson 2020, a title she holds until she relinquishes her sash later this year. She also holds the title of Mrs. Congeniality awarded to her by the other contestants from the three-state competition. Tina also can be found sharing her effervescent personality through a weekly Monday night Facebook Live broadcast with local Pastor Shane Grady called “Be Encouraged.”

“I hope to win the federal Ducks Unlimited competition one day,” Tina shares. Until then, the artist is happy to paint her feather works of heart for others to enjoy.

To see more of her work, follow Tina Richards Studio on Facebook or Instagram. You may reach the artist via email at christinajrichards@yahoo.com or by calling 417-334-8338.