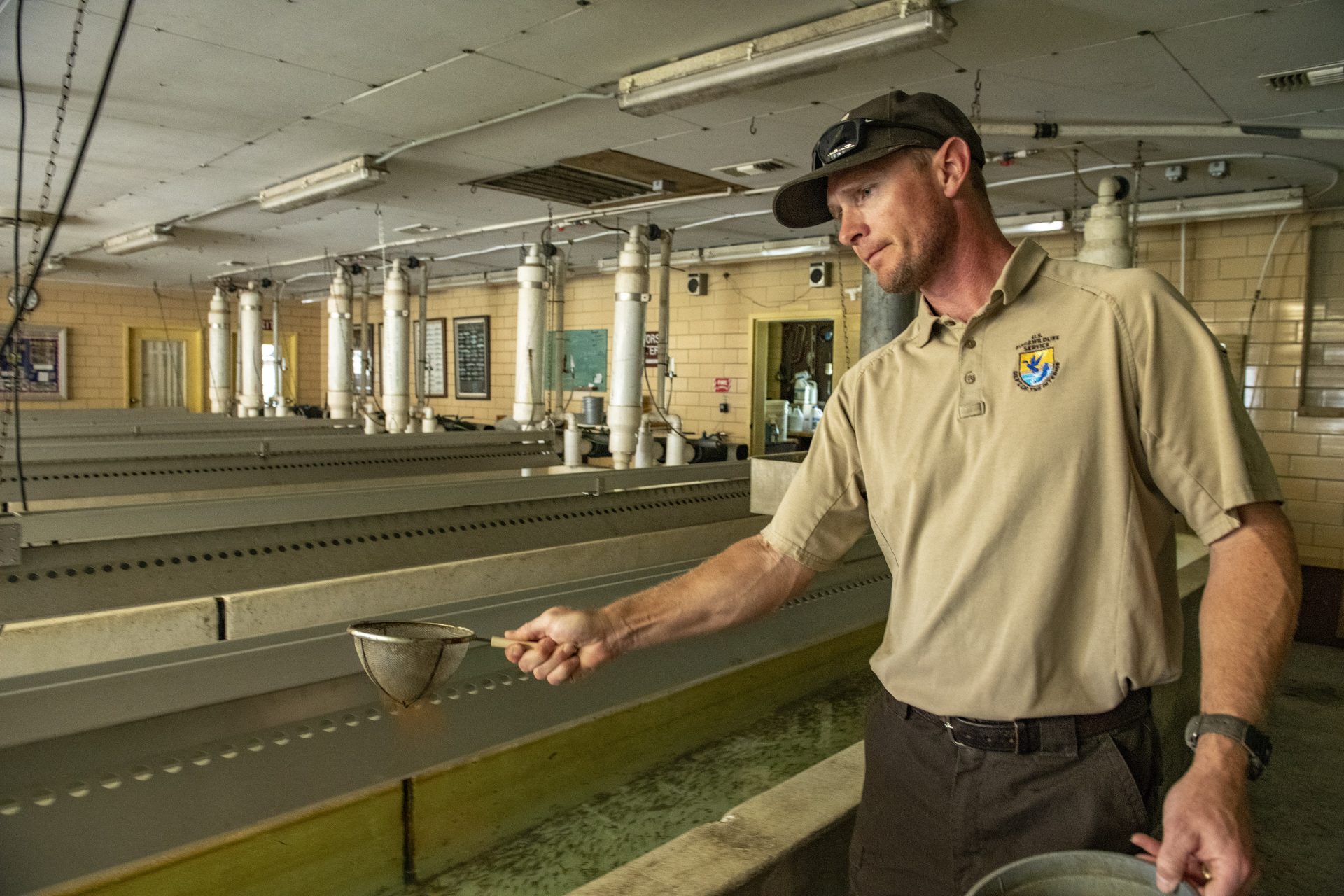 For the better part of 135 years, the mouth of Hearrell Spring has fed millions of fish to the nation’s streams through the Neosho National Fish Hatchery. Established by an act of Congress in 1888, it’s the oldest federal hatchery in operation today and since that time has played a key role in fueling one of Missouri’s signature recreational industries as well as recovering endangered species.

“As fish hatcheries go, we’re unique in the respect that the vast majority are in the country, off the beaten path,” says Assistant Manager Nathan Eckert. “The local public views us a park, so we have tens of thousands of visitors every year.”

The hatchery’s close ties with Neosho stem from its location. The town, once a few miles away from the grounds during the 19th century, now surrounds them. Train tracks that once carried freshwater species by milk can and fish car still run past the buildings, but modern transportation methods have made way for specialized tanker trucks. The original feed preparation room now serves as a museum to the bygone era when Nathan’s predecessors would have worn woolen suits, even in summer. The water that supplies the hatchery still runs from Hearrell and three other area springs, but it no longer flows through wooden pipes wrapped in iron bands and tar. The federal hatchery system celebrated its 150th anniversary on June 10, and for much of that time, despite the changes, the mission at the Neosho facility has remained the same: Raising fish, which visitors can see and feed during a guided tour, to stock Missouri’s waters.

Chief among the hatchery’s residents are rainbow trout one day destined to swim the waters of Lake Taneycomo near Branson. Neosho contributes about 180,000 or roughly one-third of the 560,000 rainbows stocked in the lake every year with the Missouri Department of Conservation providing the remainder. The partnership has created an enduring lure for anglers hoping to catch the next record lunker. Blue Eye resident Bill Babler’s state record — a 40-pound, 6-ounce brown trout caught in 2019 — fell less than 2 pounds short of the all-tackle world record caught in New Zealand.

The Neosho trout are raised to about 10 1/2 inches before they are released, growing at a rate of roughly 1 inch per month once the eggs hatch. Eggs are brought in five times per year spaced a few months apart so the restocking numbers coincide with the peak of fishing action on Taneycomo. The 18,000 to 20,000 trout stocked during the winter months ramps up to as much as 80,000 in the summer. Growing fish to the prescribed size is a constant numbers game of graduating food sizes and organizing the cubic feet of water required for thousands of rainbows.

“Ultimately, we’re a trout hotel, but I’ve already rented the hotel room out, so you’re here for an inch a month,” Nathan says. “If you don’t eat or get stressed out and don’t grow for two weeks, I don’t lose two weeks: I’ve lost the two weeks you weren’t growing plus the two weeks it takes to catch up.”

Hatcheries also raise federally endangered species and those which have difficulty repopulating in the wild. The Neosho hatchery assists with a multi-state effort geared toward improving numbers of the pallid sturgeon on the Missouri and Mississippi rivers, and is presently rearing lake sturgeon as well. Other species of note include the Topeka shiner, a native of prairie streams in Missouri, and the Neosho mucket. Roughly the size of a baked potato when fully grown, this freshwater mussel will spend two years growing to the size of a golf ball before being released in the wild roughly two hours in any direction from the hatchery.

“The Neosho River basin is largely what its range is,” Nathan adds, noting the hatchery also raises the fish — freshwater drum, flathead catfish, largemouth and smallmouth bass — that Neosho muckets and other mussels use as hosts to reproduce. “We’re very well positioned to be one of the major players in recovering that mussel.” 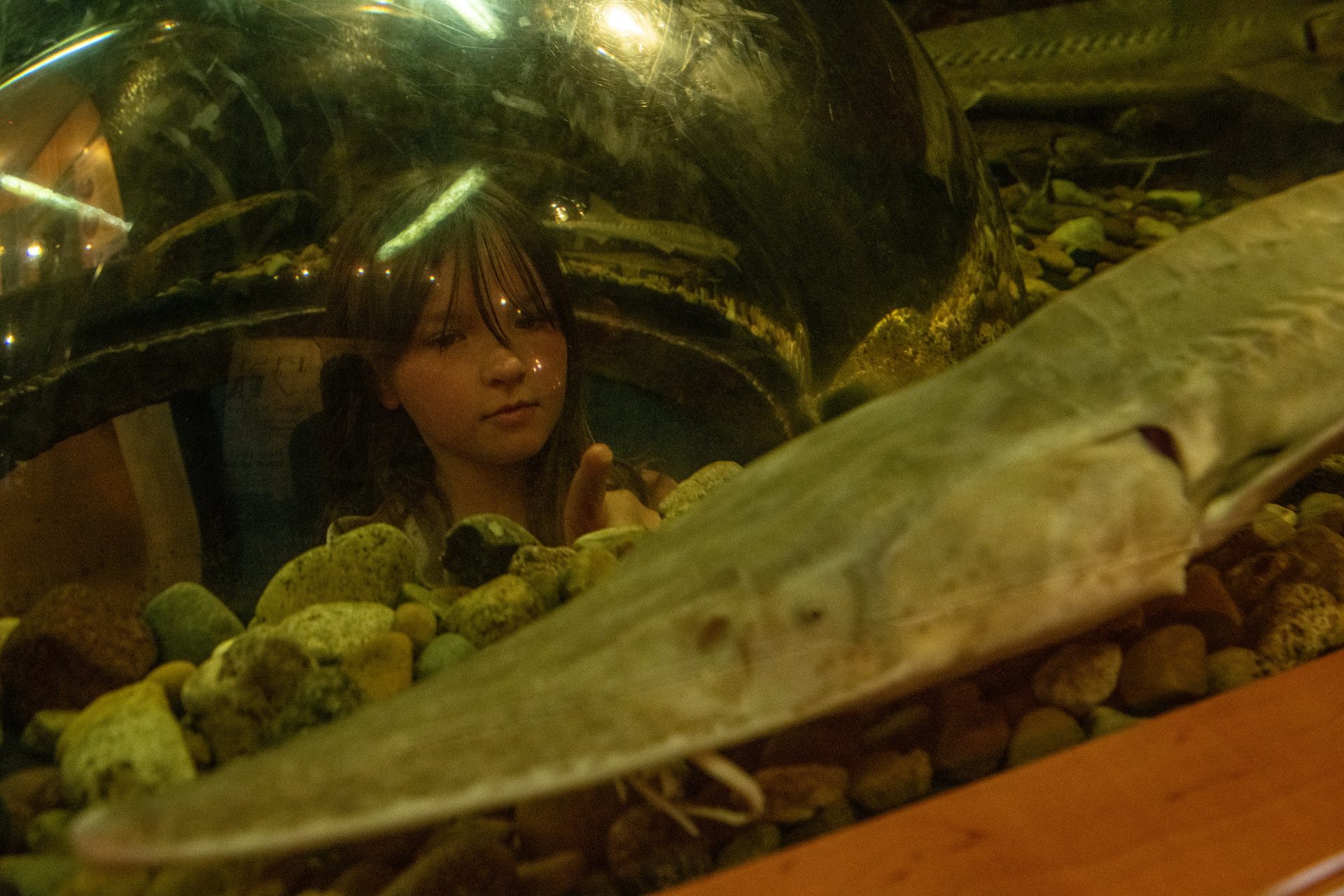 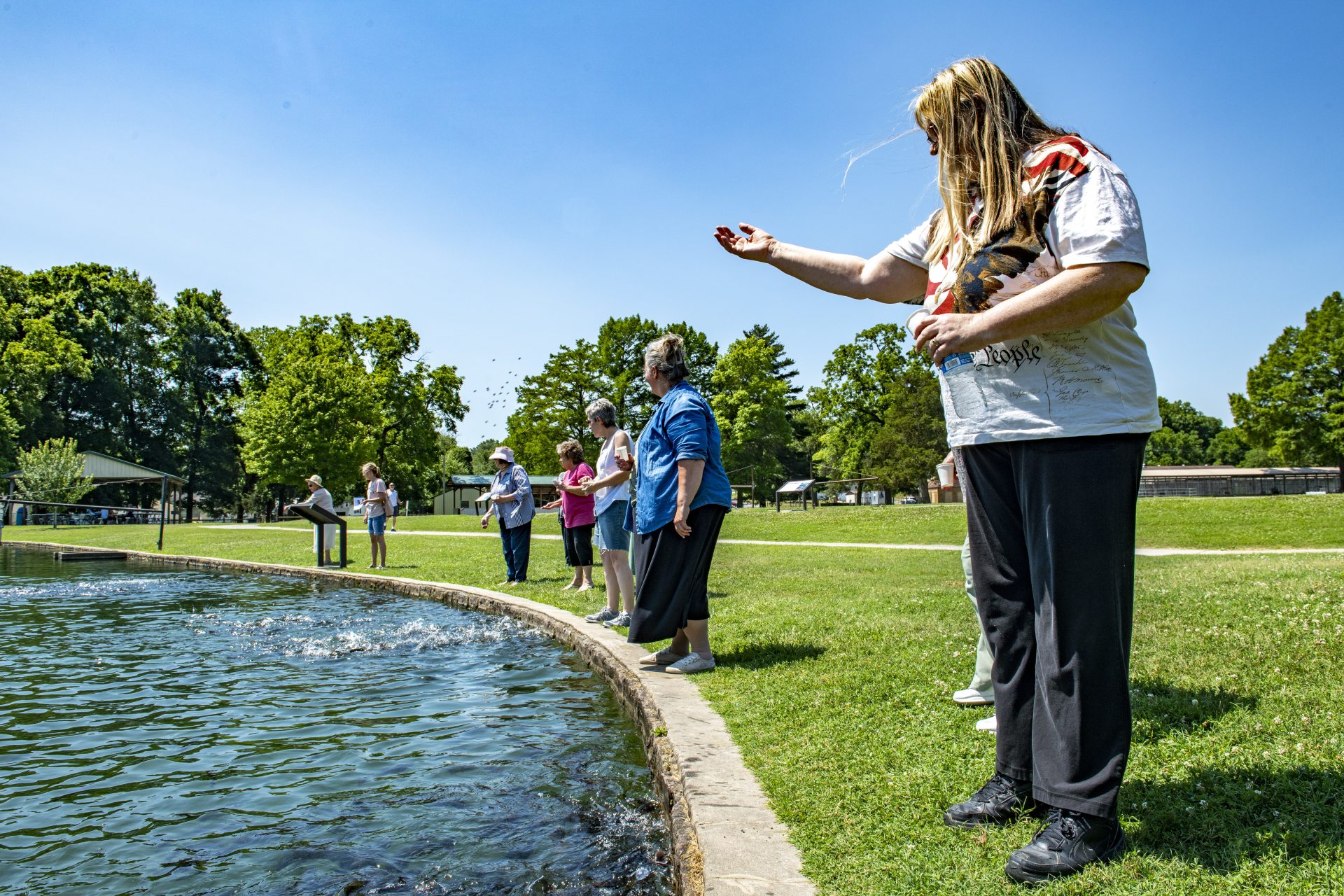 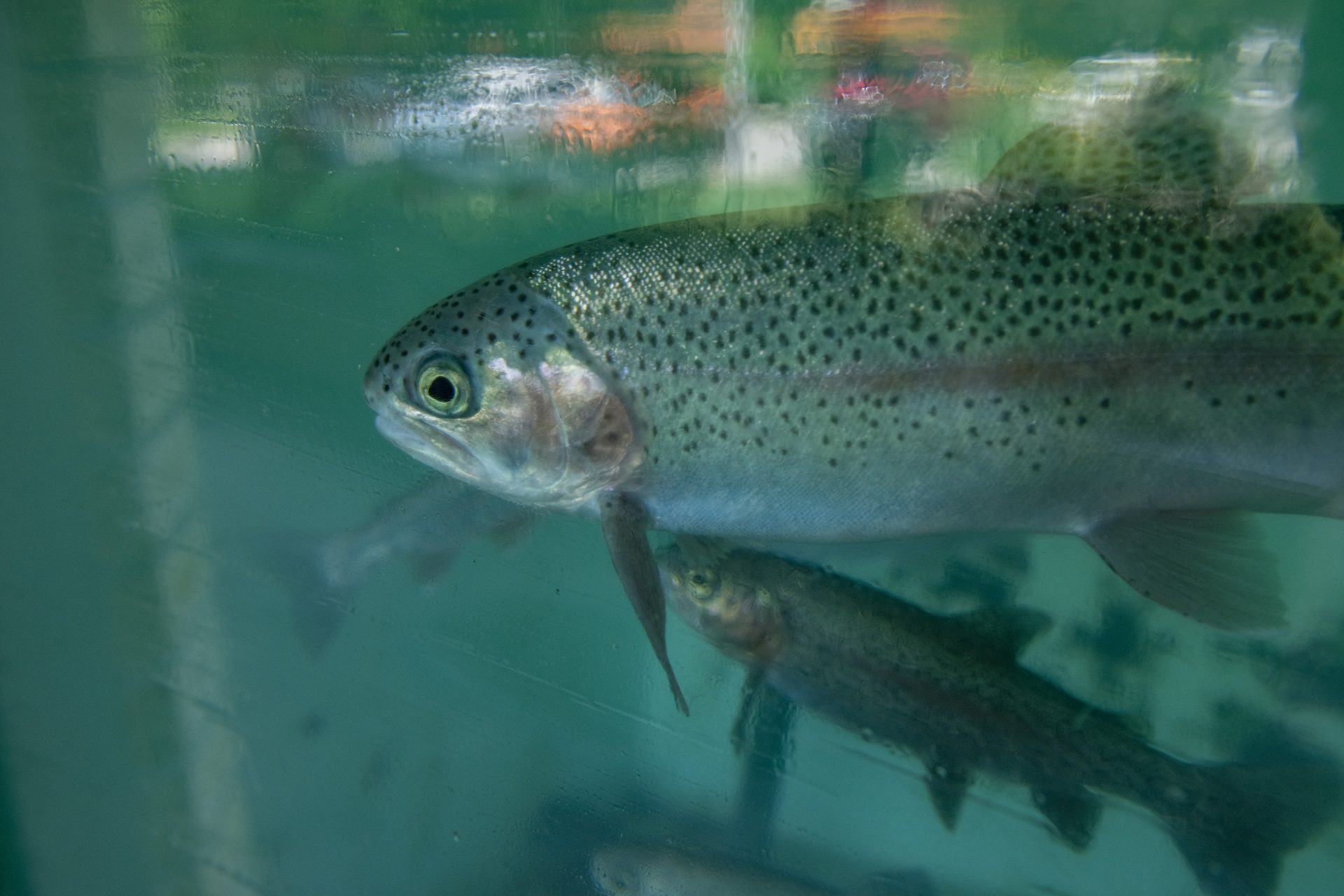 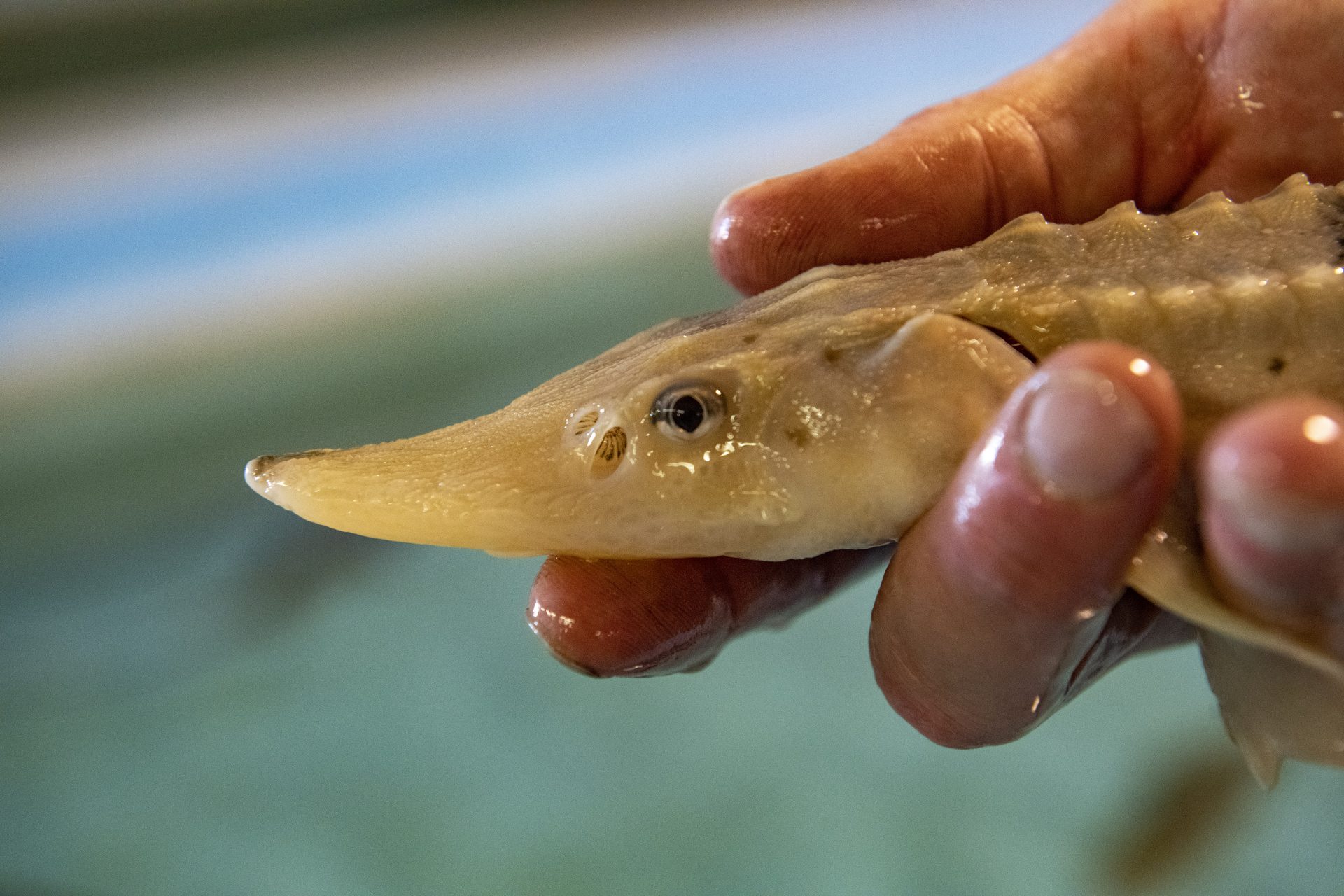 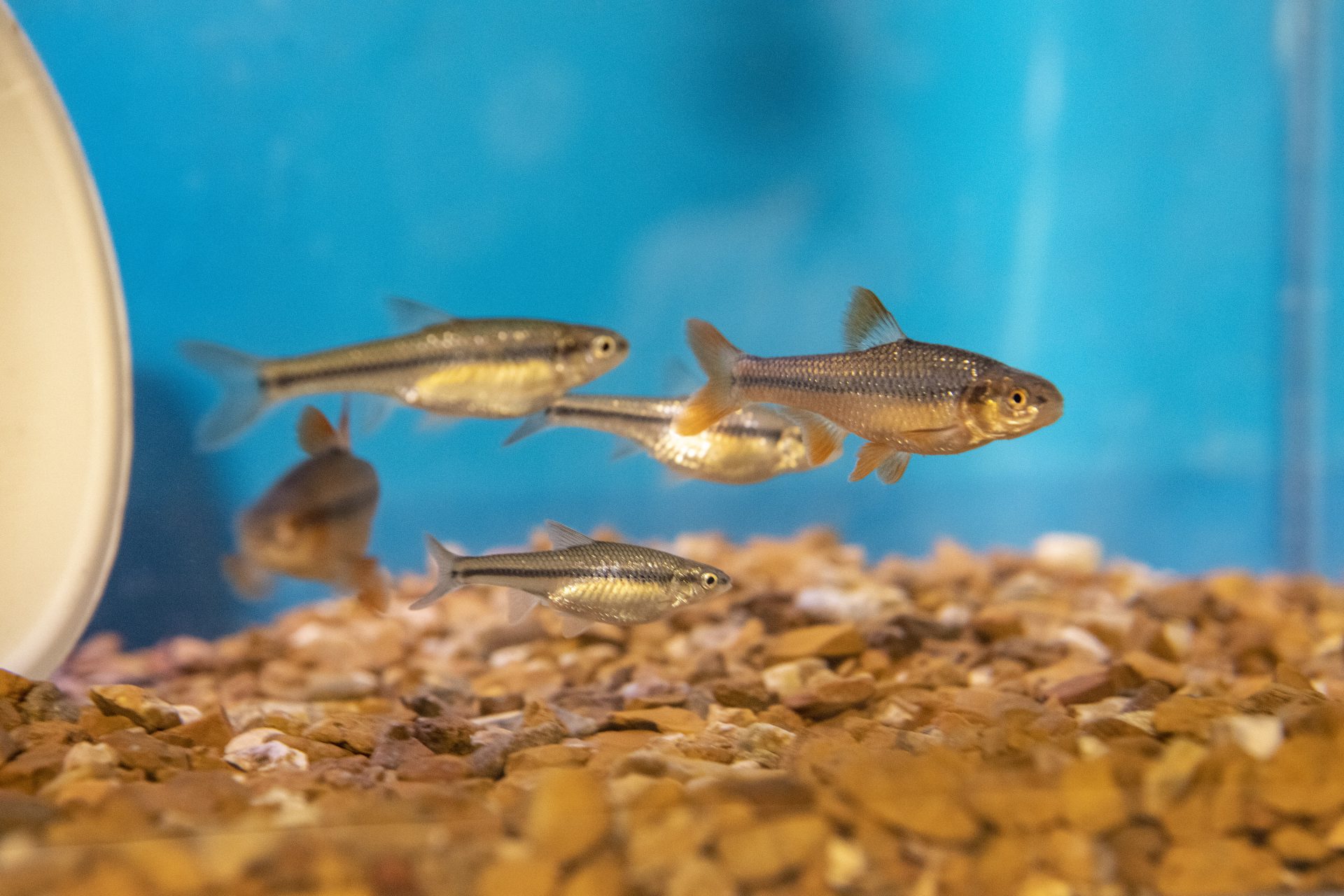 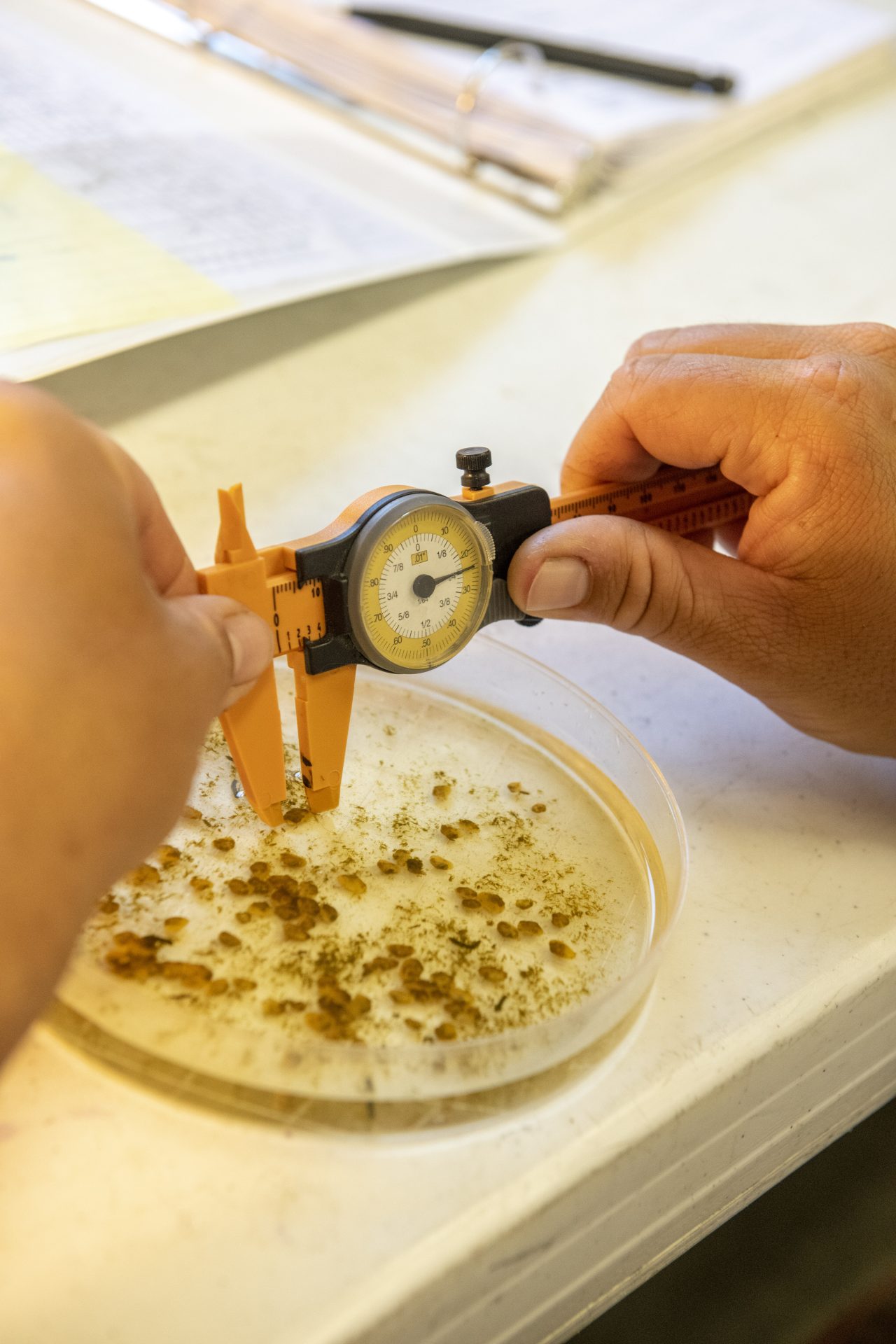 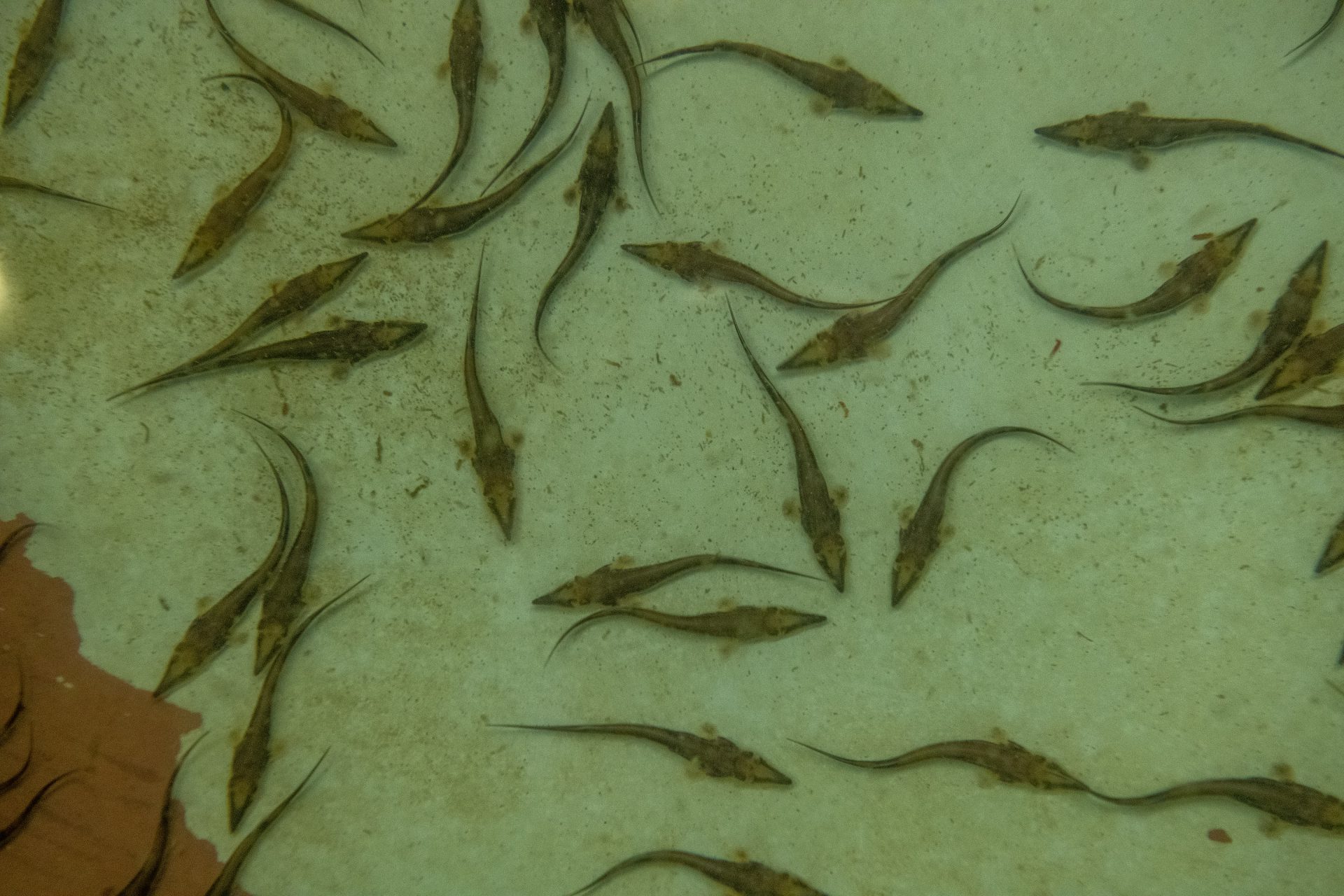 Alongside the day-to-day operations of the hatchery itself, its other features are designed to connect guests with nature. Locals come to walk the one-third mile loop that navigates the ponds, while visitors can learn about everything from the Ozark cavefish to the pipevine swallowtail in the visitor center — and everyone loves feeding the fish. With some assistance from its volunteer group, the Friends of the Neosho National Fish Hatchery, the facility also puts on four annual events for the public.

“Whenever we have a big event like the fishing days we try to help out,” says volunteer Evelyn Eckhard, adding the Friends also help run the visitor center gift shop and spearhead fundraising efforts for special projects. “They have an open house with the conservation department during the Neosho Dogwood Tour, and people come out, get a free tree and something to eat, and walk around to see everything. It’s a fun time.”

Other highlights include the three special fishing derbies for children, veterans, seniors and people with disabilities, which are typically held in the spring. The hatchery provides the tackle and trout, anglers just need to bring a big smile, a camera and some freezer bags if they want to take home their catch for the grill. Whether you want to get your picture taken with a living fossil, start a feeding frenzy in the trout pond or get another stamp in your Blue Goose Passport book, the Neosho National Fish Hatchery is a convenient and unique gateway to the state and the country’s natural history.

“This hatchery has been a part of the community for 130 years, and that’s worth seeing,” Nathan says. “For the adults, you can appreciate the history. For the kids, you can see fish and feed fish, so we really have something for everybody.”

The Neosho National Fish Hatchery grounds are open to the public during daylight hours. The visitor center is open from 8 a.m. to 4:30 p.m. on weekdays and 10 a.m. to 4 p.m. on weekends. For more information, call 417-451-0554 or visit www.fws.gov/fish-hatchery/neosho.