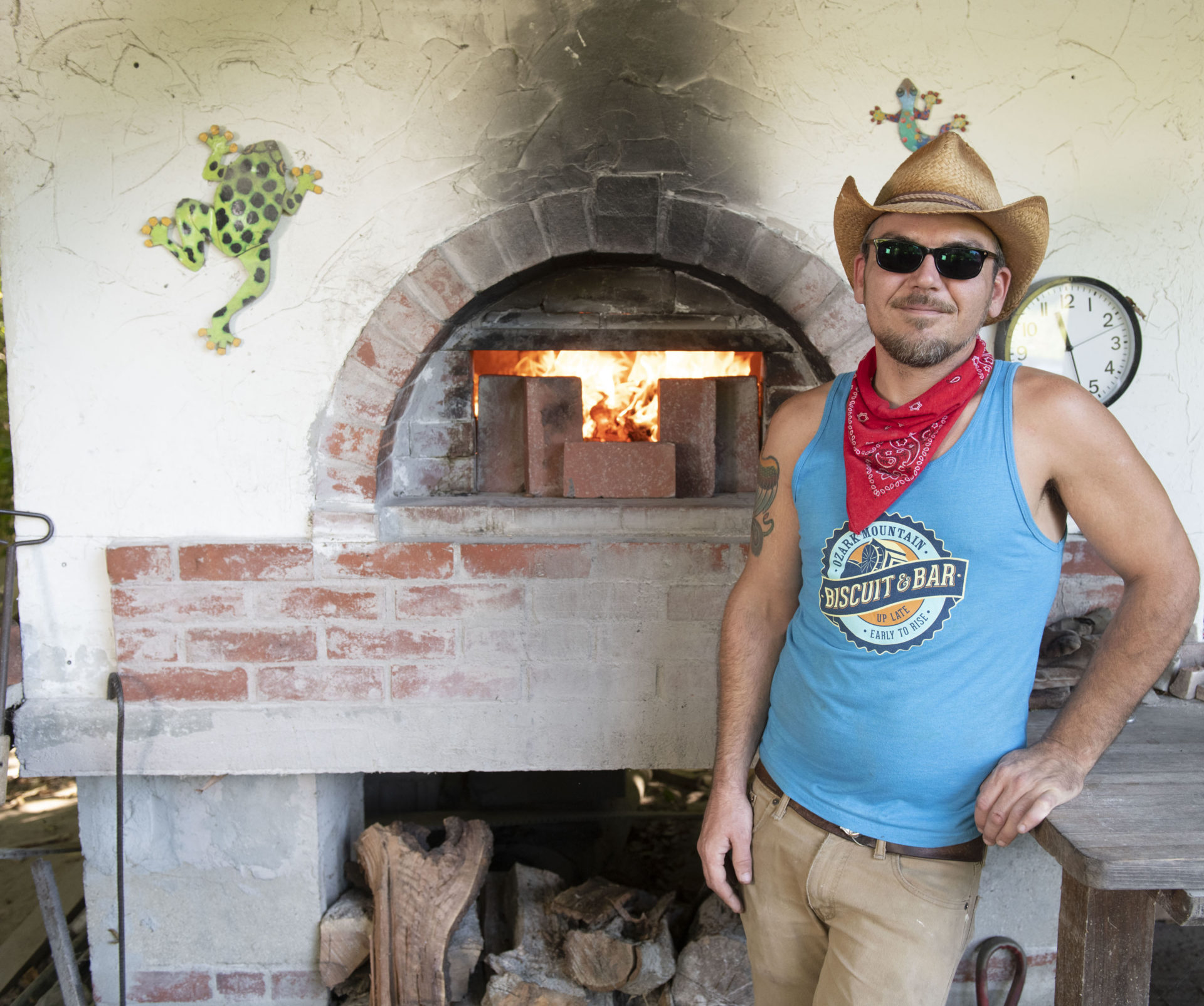 It’s a quiet and still morning on the farm. Cell service is spotty at best and not many cars pass by on the gravel road. Chris Foley is alternating his time between chopping wood and hurling a Frisbee for his dog, Apollo, for the umpteenth time. He adds the wood to the fire inside the 21-square-foot oven he’s tending. But don’t expect anything to eat soon, this is a big preheat. Tomorrow there will be bread.

“I had a whole learning curve on thermodynamics and surface temperature versus depth of temperature,” Chris says. “It’s sort of like throwing a dart at two moving targets and hitting both bull’s-eyes with one throw.”

Chris is the owner of Fiddle & Stone Bread Co. in Columbia. For the past three years, he’s focused primarily on sourdough, naturally leavened bread cooked using local ingredients inside the wood-fired oven on the farm just a few miles outside of Columbia. He sells his bread two days per week at the popular Columbia Farmers Market.

Chris’ interests in baking go back decades to his teenage years working at a local bakery in Ashland. After attending Mizzou, he’s baked at some well-known restaurants in Columbia, including Cafe Berlin, Pizza Tree, Ozark Mountain Biscuit Co. and about a decade at Shakespeare’s Pizza.

About five years ago, Chris was working a handful of jobs and found it was getting to be a grind and very repetitive. “I quit drinking then and ended up with all this extra time on my hands. So I thought I would try and figure out sourdough. I started my own sourdough culture and looking back now,” he says while shuddering, “I can’t believe how proud I was of those first loaves.”

Through some trial and error, he was able to get his arms around making sourdough bread. An acquaintance put him in contact with farmer Richard Knapp who had built a wood-fired oven that had never been used. “So we came out here and fired it up for way too long; it was probably 1,300 degrees,” he says with a laugh. “We ruined all the bread.” 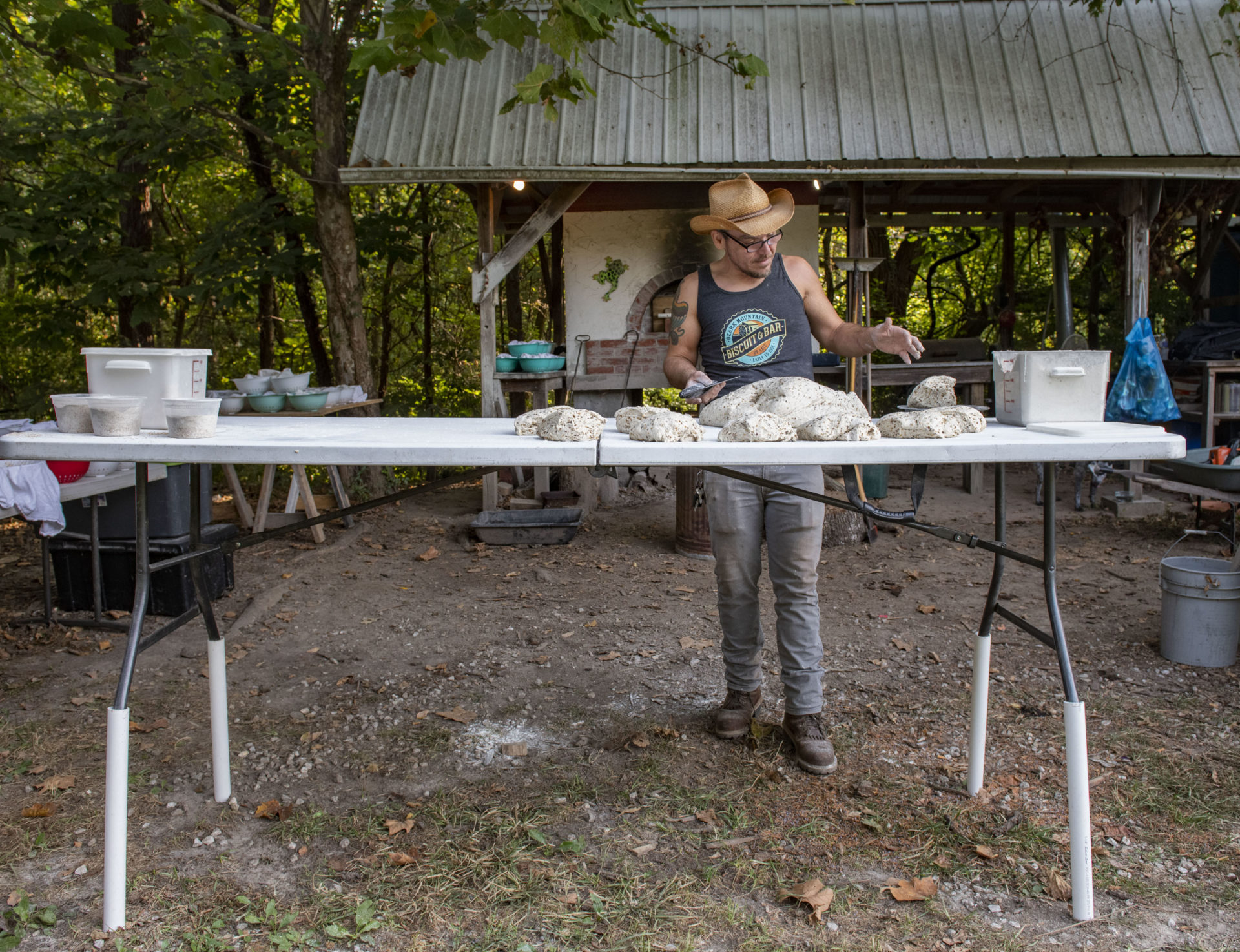 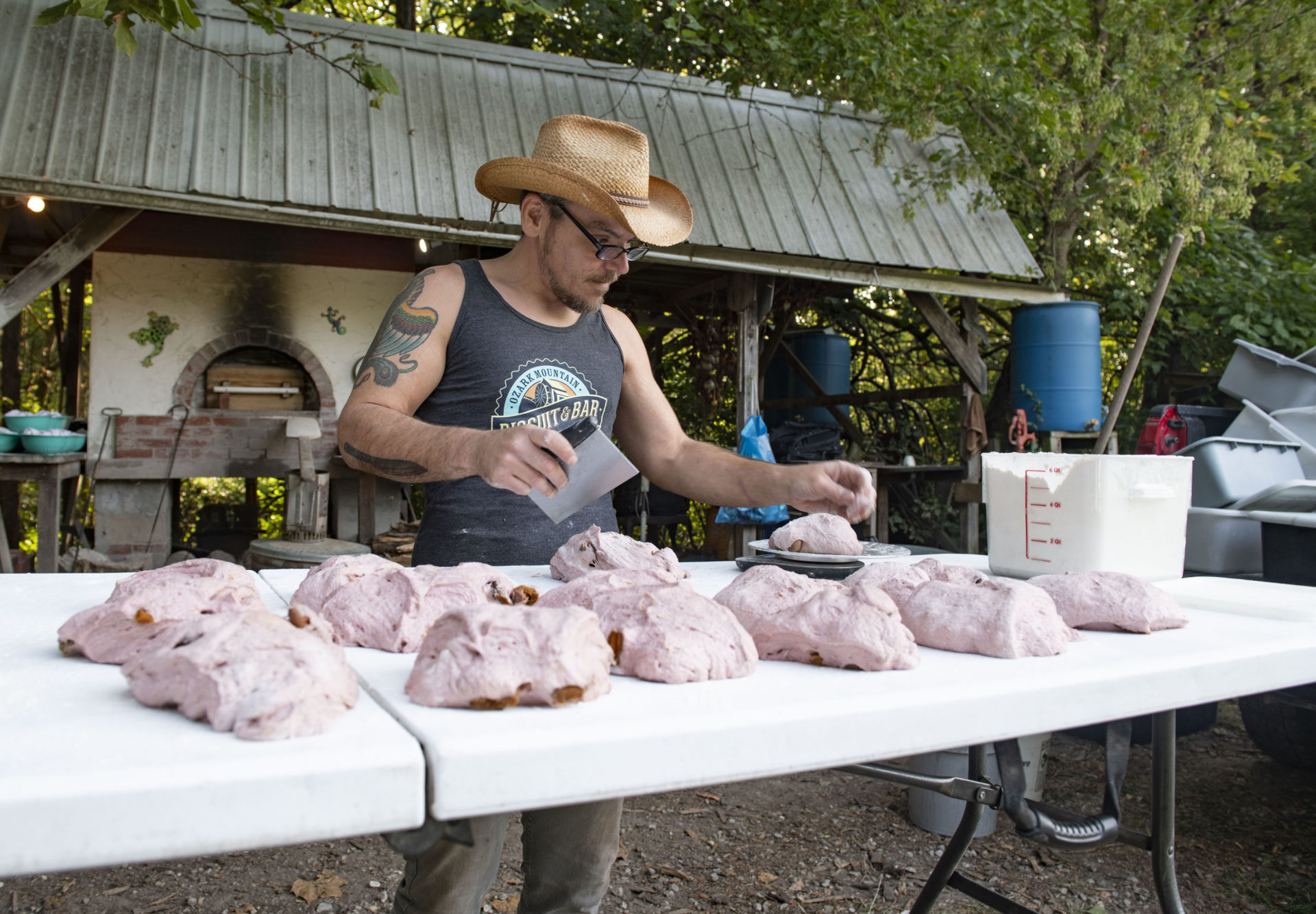 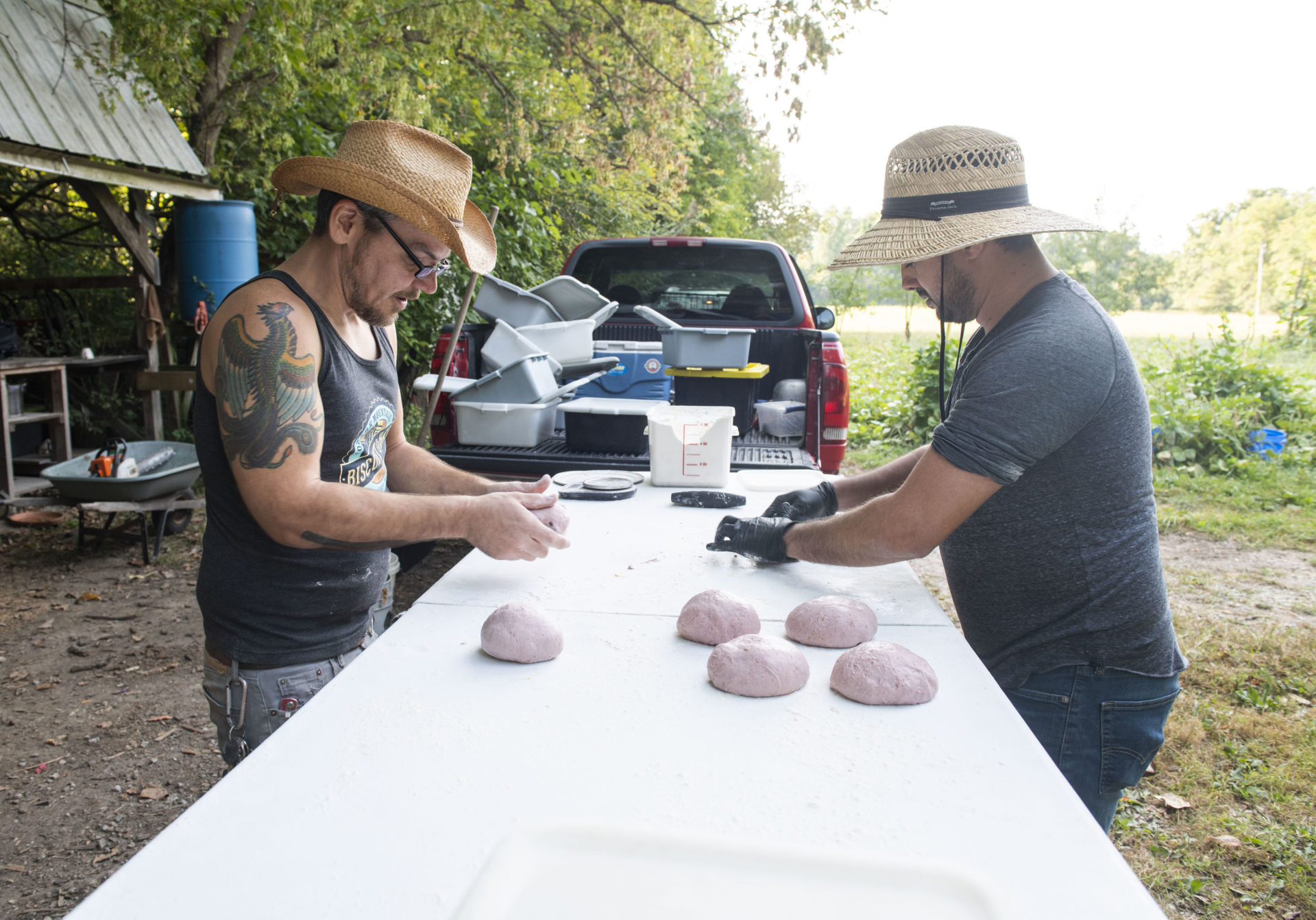 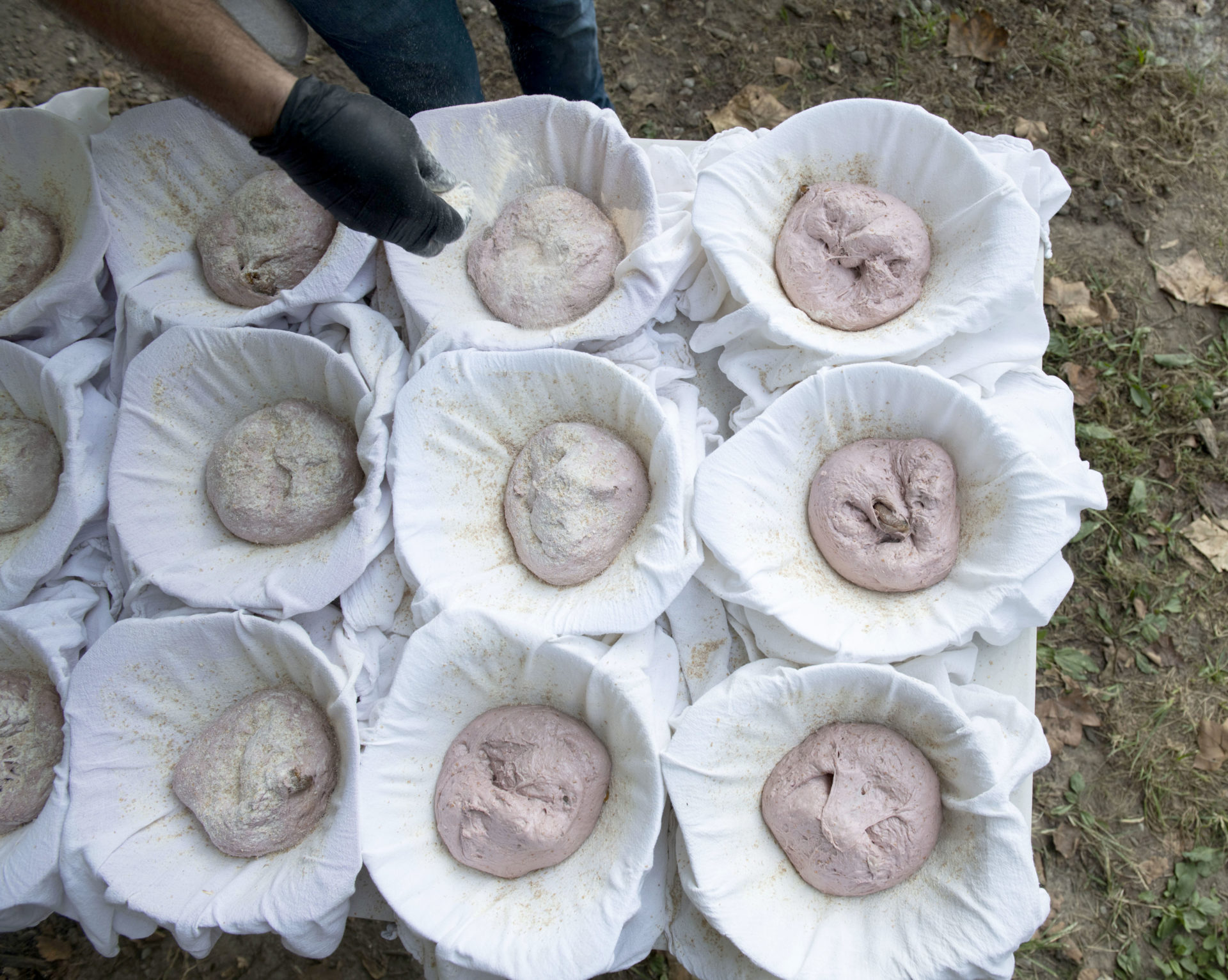 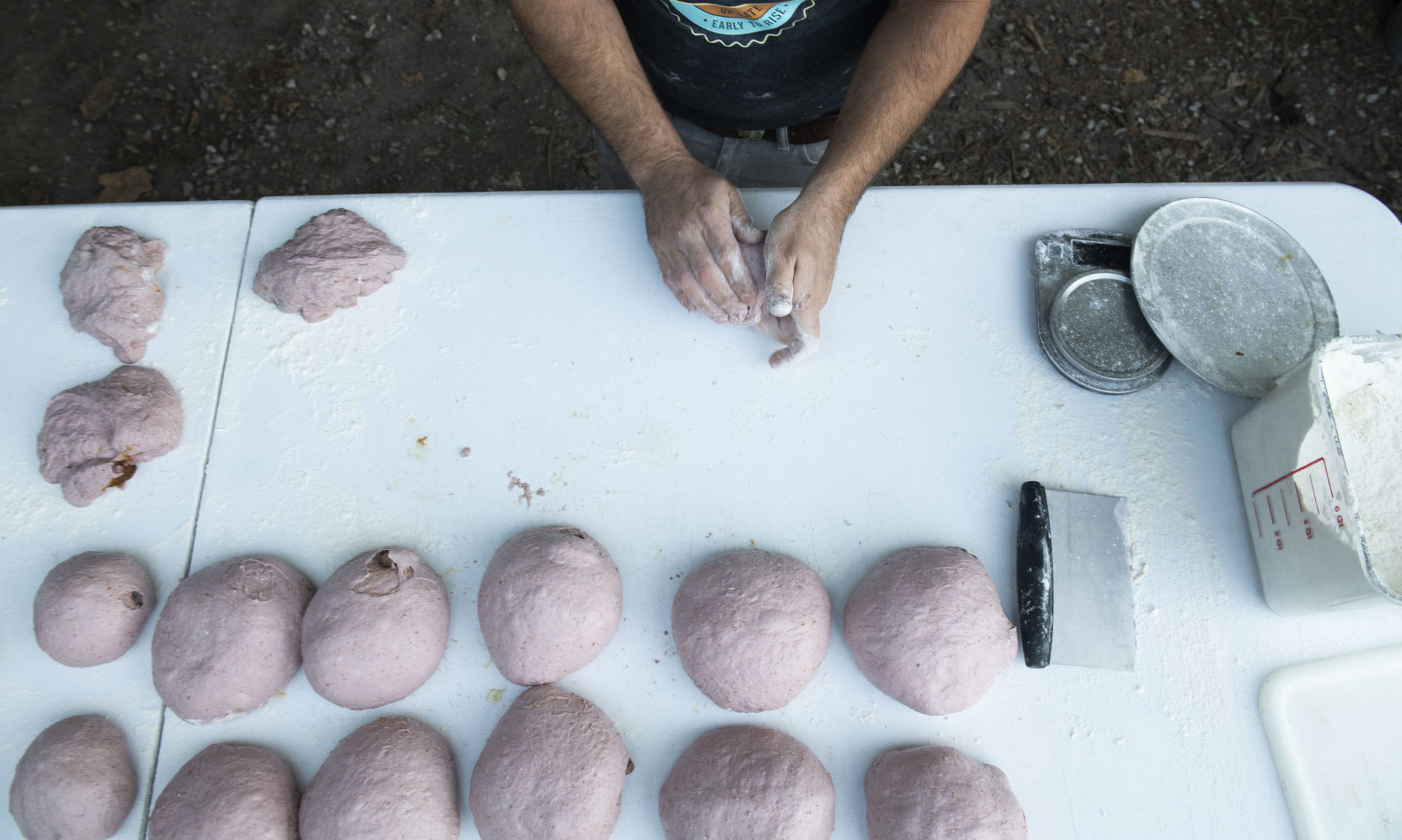 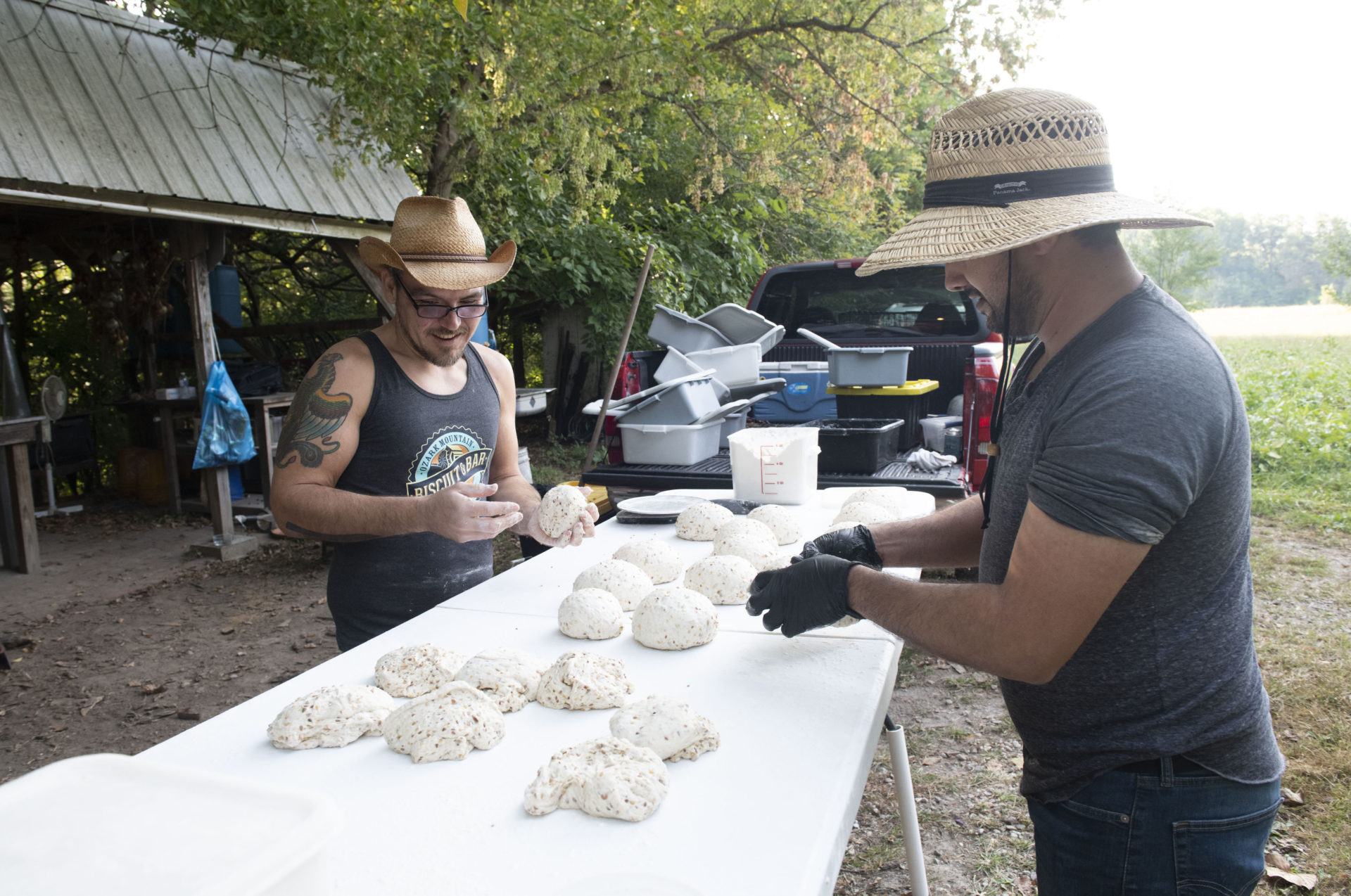 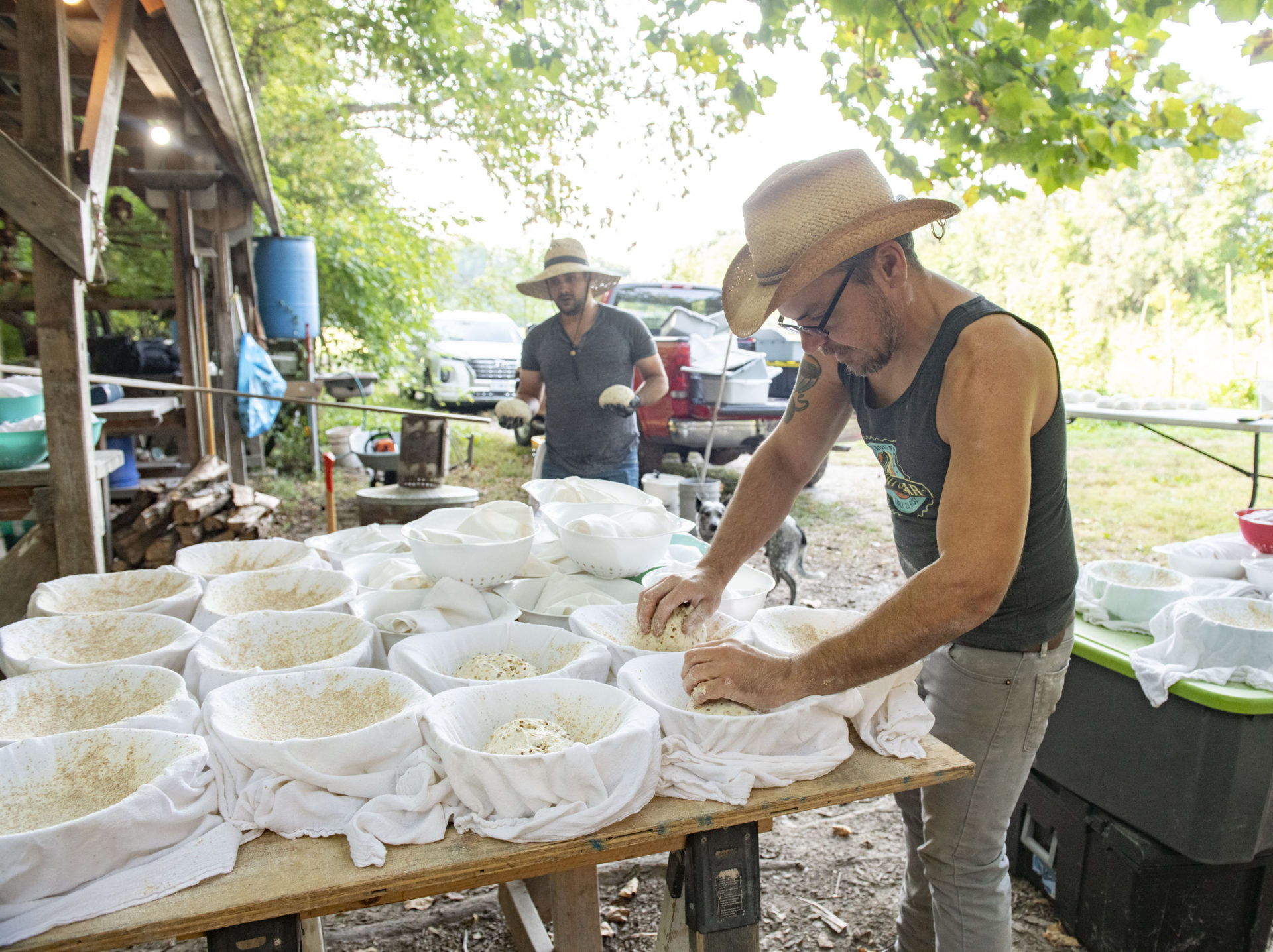 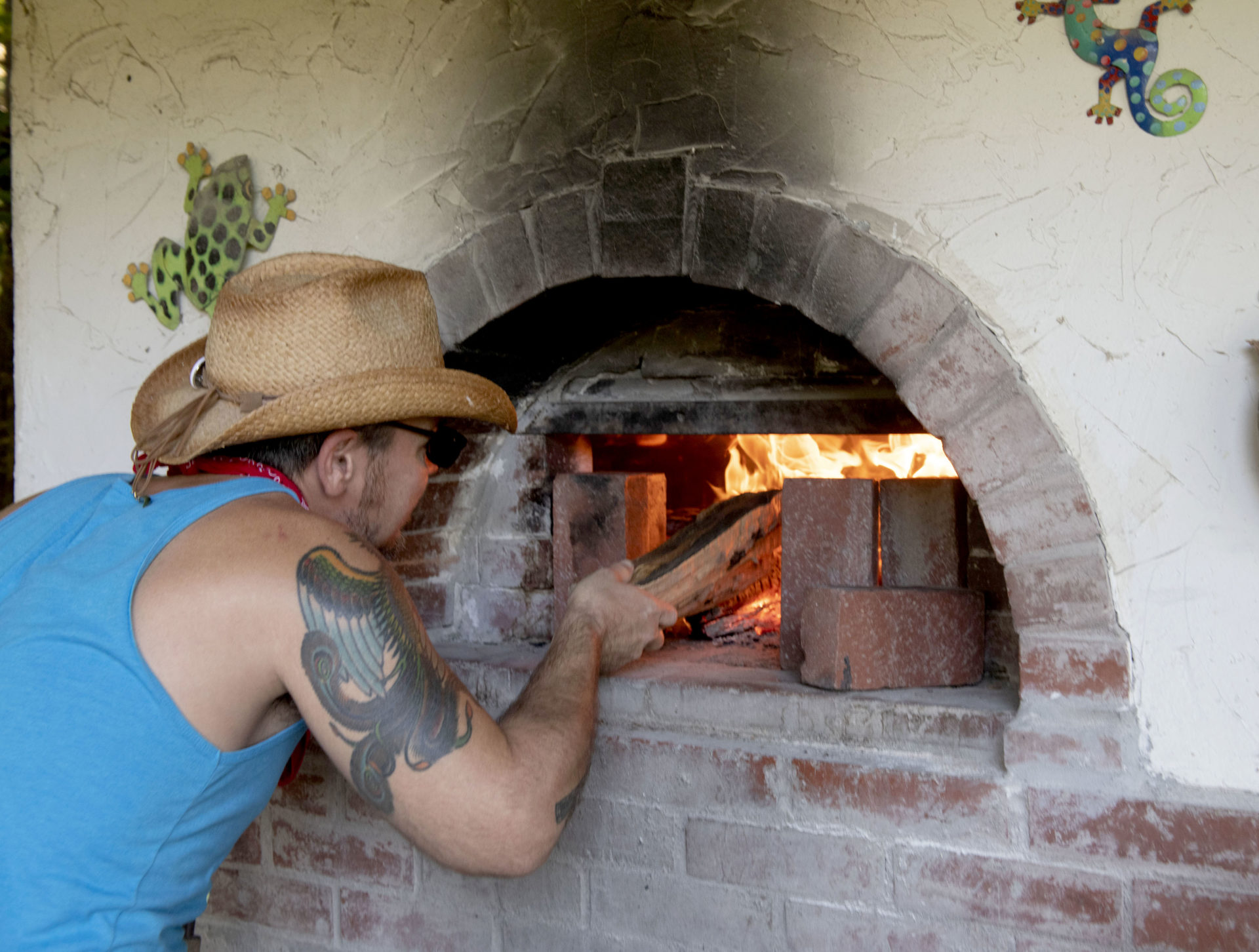 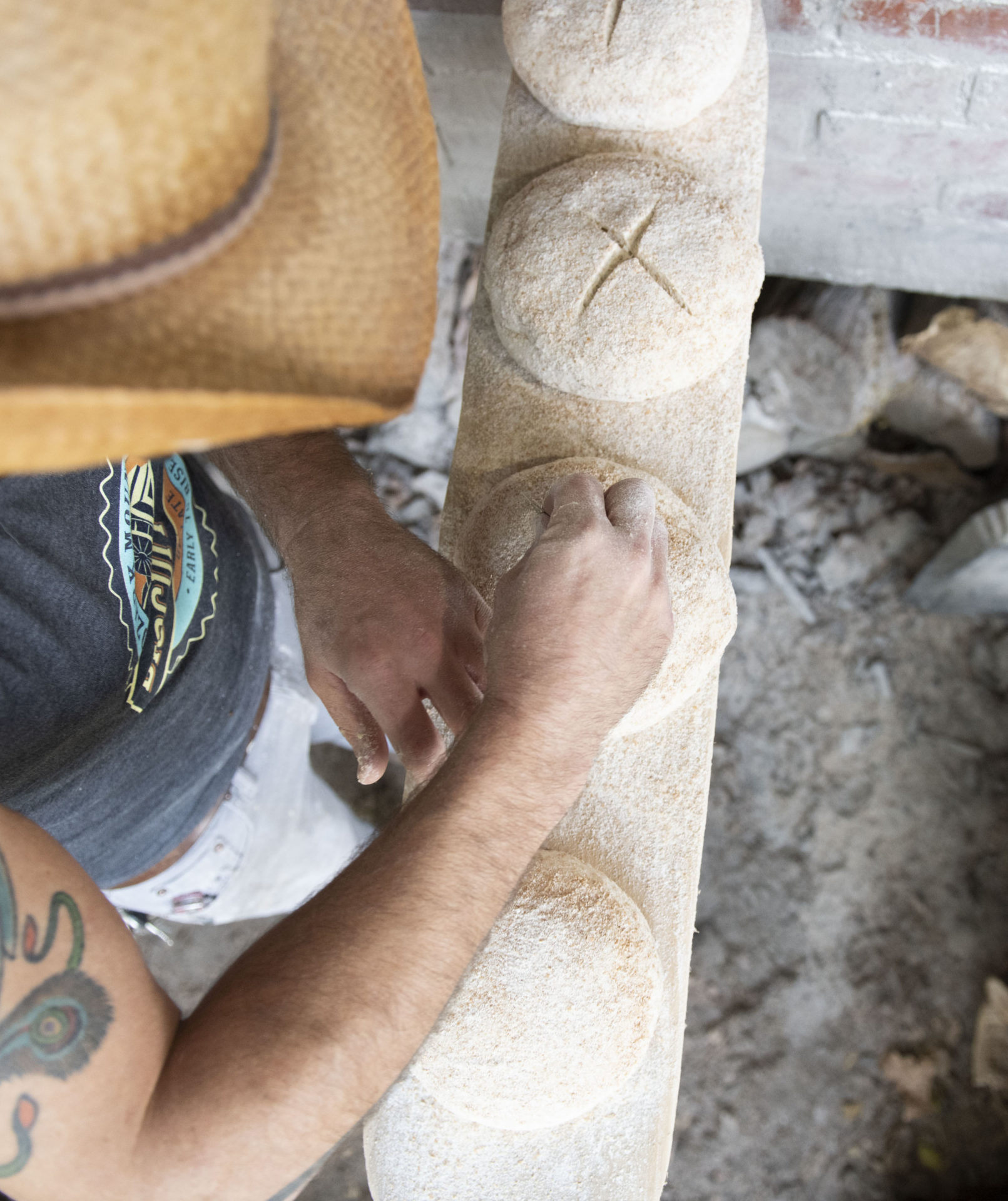 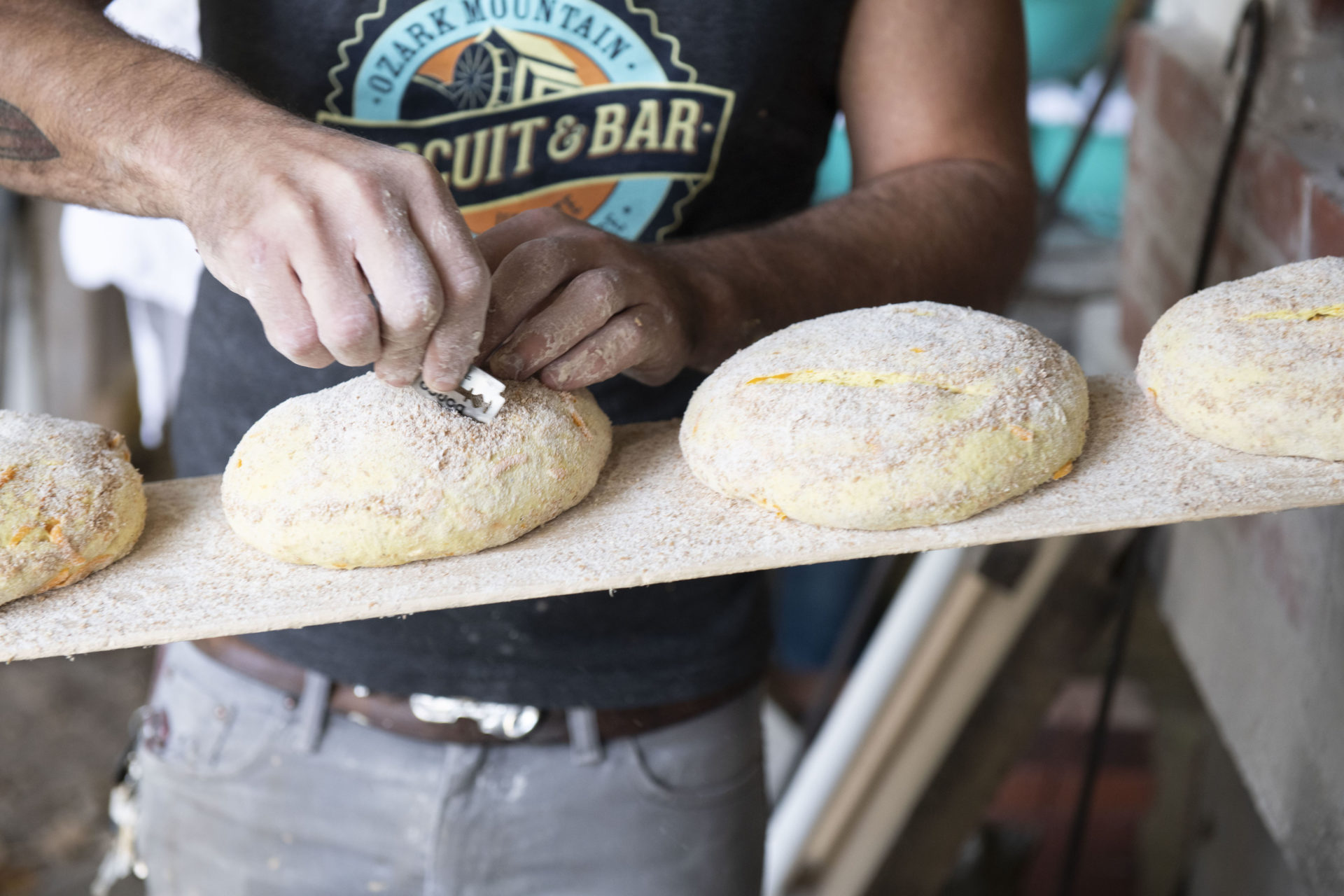 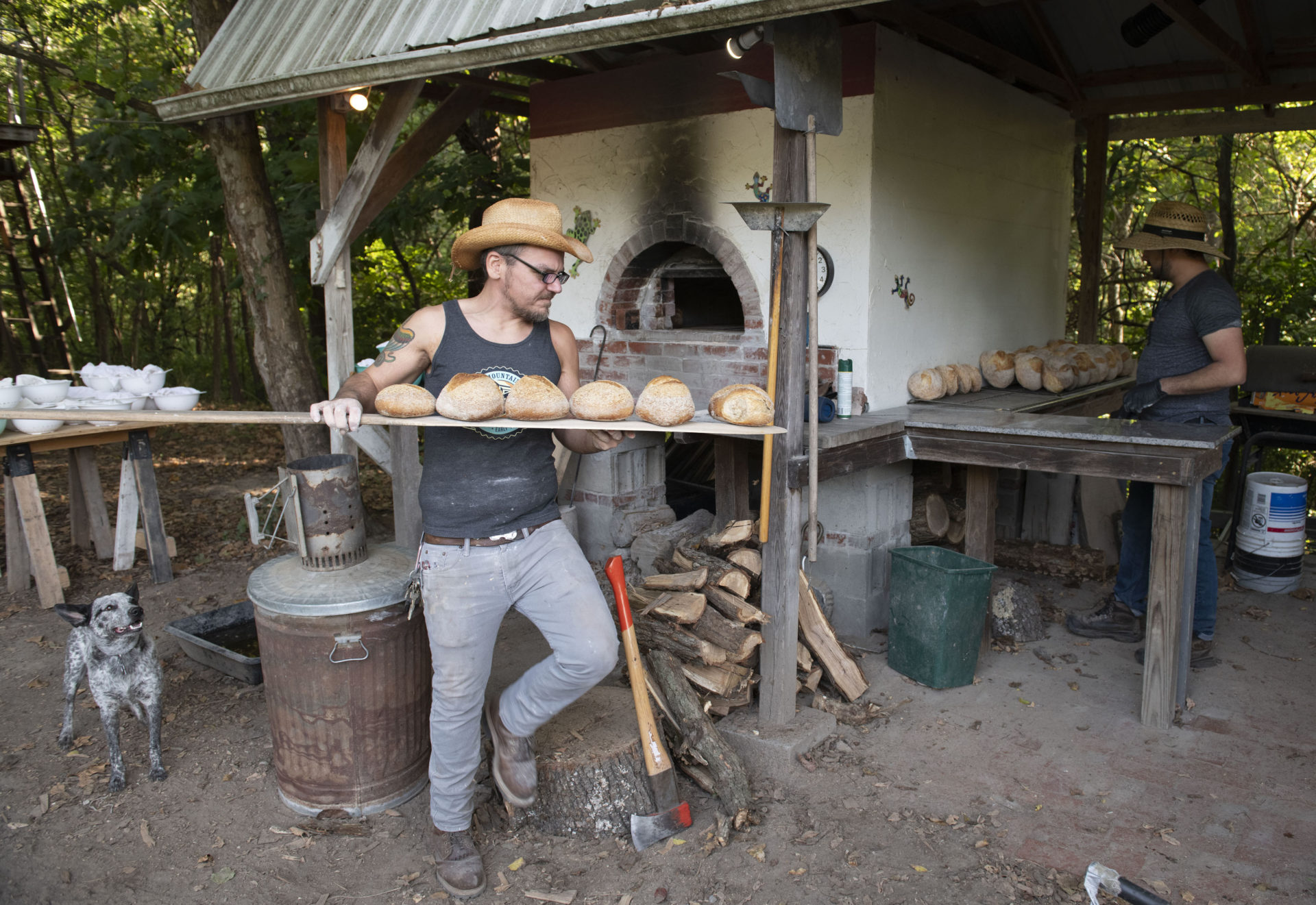 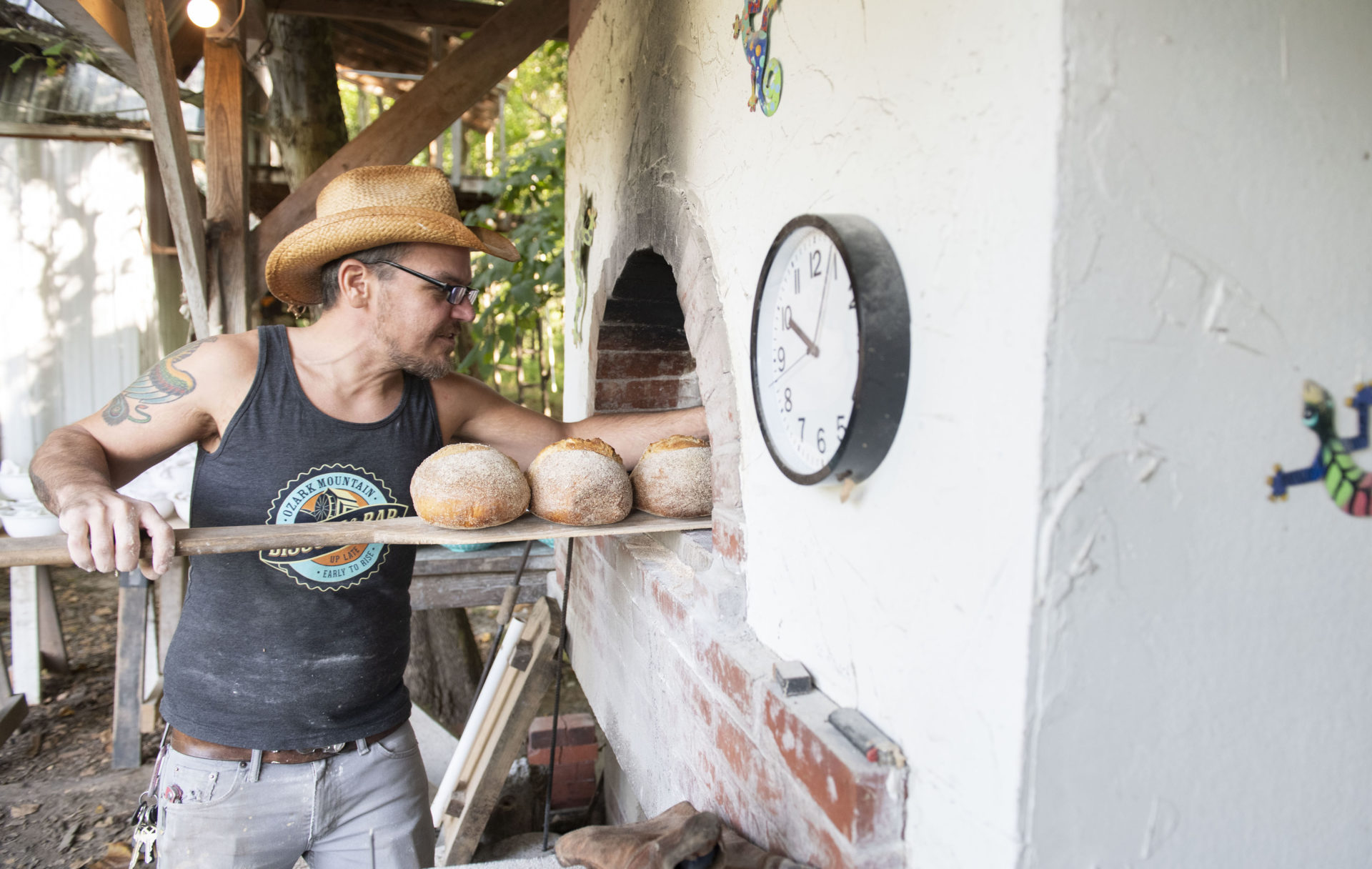 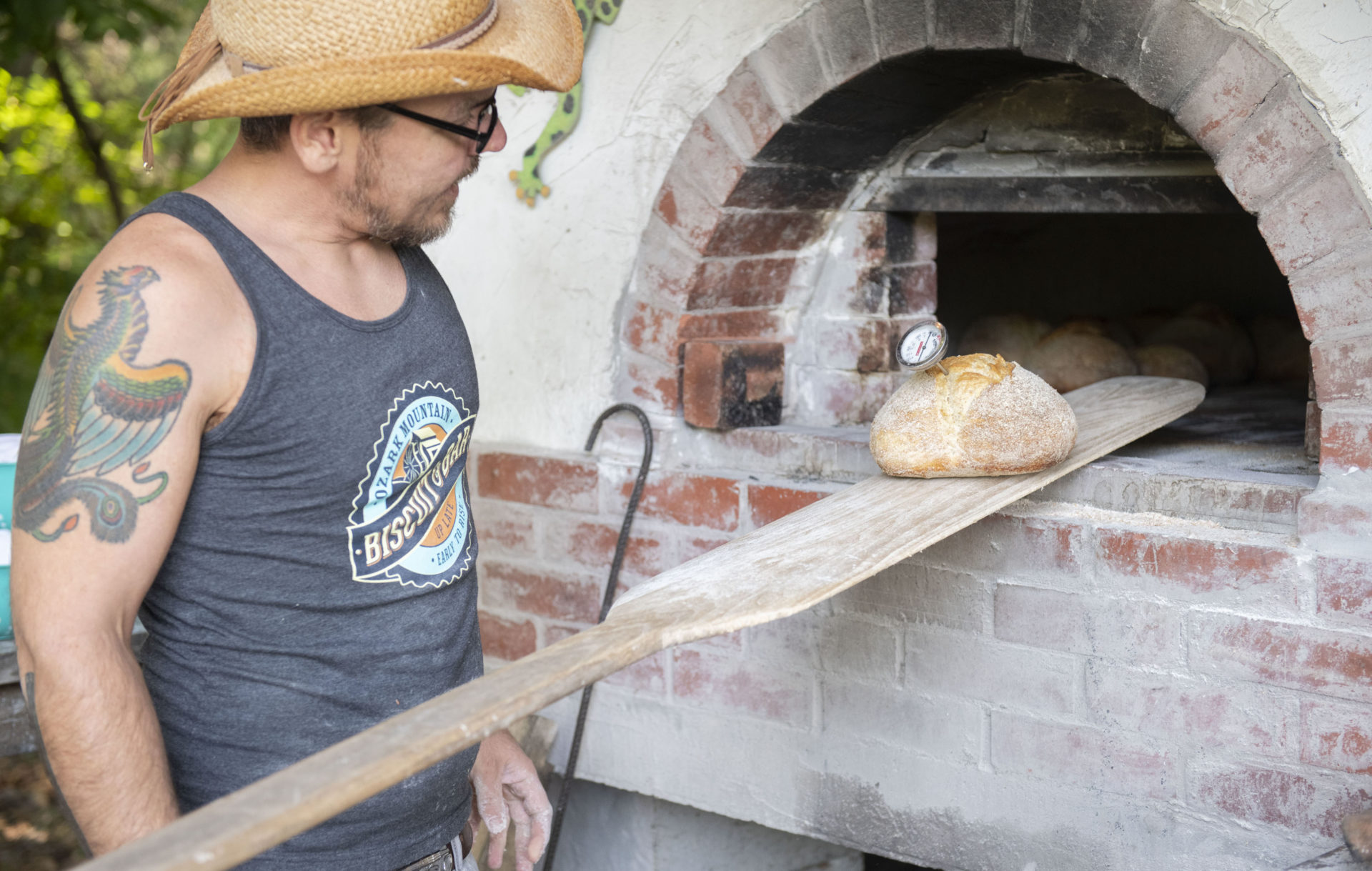 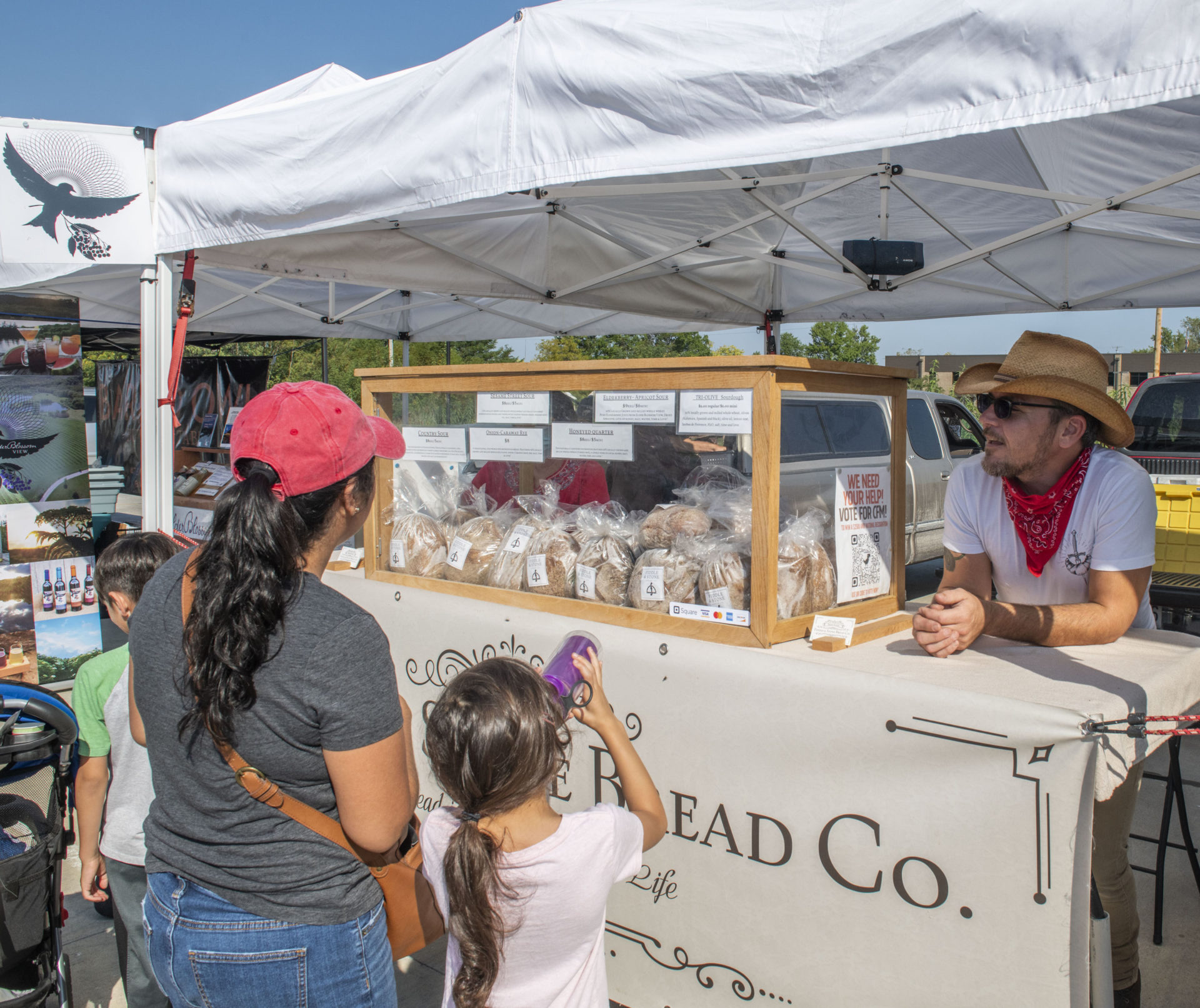 Chris learned the proper way to best utilize the oven and eventually, his friends and family said they had no more room in their freezers for his gifts. A friend invited him to do a pop-up shop during a monthly art gathering. He brought about three dozen loaves of bread and sold out. He was hooked.

“I haven’t stopped since,” he says. “I signed up for the Columbia Farmers Market almost immediately after that and now we’re up to 120 to 180 loaves for every market.”

The oven he uses is a black oven, meaning that the fire is cleaned out of the oven before baking. It cooks using the residual heat. The day before he bakes, Chris is at the farm firing up the oven for a few hours to heat it through. When he returns the next morning, the oven will have cooled down to about 425 degrees, but the heat is throughout. He lights another quick fire in the oven to give it a boost. The wood is cleaned out and the bread goes in.

Chris makes all the dough by hand, bypassing a mixer. By mixing his water with his leaven for about 45 minutes — a process called autolyse — he cuts back on the kneading required for his dough. “That creates the gluten so instead of kneading the dough, it’s just a short series of folds,” the baker says.

Sourdough refers more to the method of making the dough as opposed to the flavor of the bread. Fiddle & Stone is currently using a sourdough starter that dates back 140 years to a San Francisco bakery. Chris likes to keep his ingredients as local as possible and it doesn’t get any more local than his whole wheat and rye flours. He buys them from Richard, who mills the flours less than a Frisbee throw away from the oven. “I was weighing some out this morning,” Chris says. “It still felt warm from being milled.”

Once the dough is made, it’s stored in a walk-in cooler overnight to slow down the fermentation process until the next morning. Chris is joined on baking days by his roommate, Josh Santiago. Working in batches, they measure and shape the dough into about 40 different boules. The loaves rise while the oven is prepped for cooking. Chris scores the bread and using a tool almost akin to a canoe paddle, he loads 40 loaves into the oven.

“We’re outside, so I’m kind of at the mercy of Mother Nature with control over the oven,” he says. “That first batch the oven should be around 500 degrees and will start to decrease. The first batch might take 35 minutes and the third could take 70.”

He tends to the dough in the oven, using the paddle to check the bottom for burning and spinning them around. Once they look done, he confirms it with a thermometer and they’re placed out to cool for the next day’s market.

Chris says that his unique cooking process can be time-consuming, but the finished product speaks for itself. “If I did this with a mixer, traditional oven and flour from a big-box store the bread wouldn’t be anywhere near as good,” he says. “Wood-fired ovens bake convective, conductive and radiative heat. It makes so much of a difference and gives the bread a harder, denser crust.”

Fiddle & Stone offers about a dozen varieties of bread, with all but one made using the natural leavening process. Chris and his mother are regulars at the Columbia Farmers Market on Tuesdays and Saturdays selling his loaves for $8 each.

Chris says that while many people might be scared of baking thinking there has to be an exactness to it, he finds pleasure in the process.

“It’s cathartic,” he says. “I get to come out here twice a week and it’s quiet and peaceful. Baking is kind of reactionary, the fiddling you have to do with the baking of bread. I’m just the guide.”