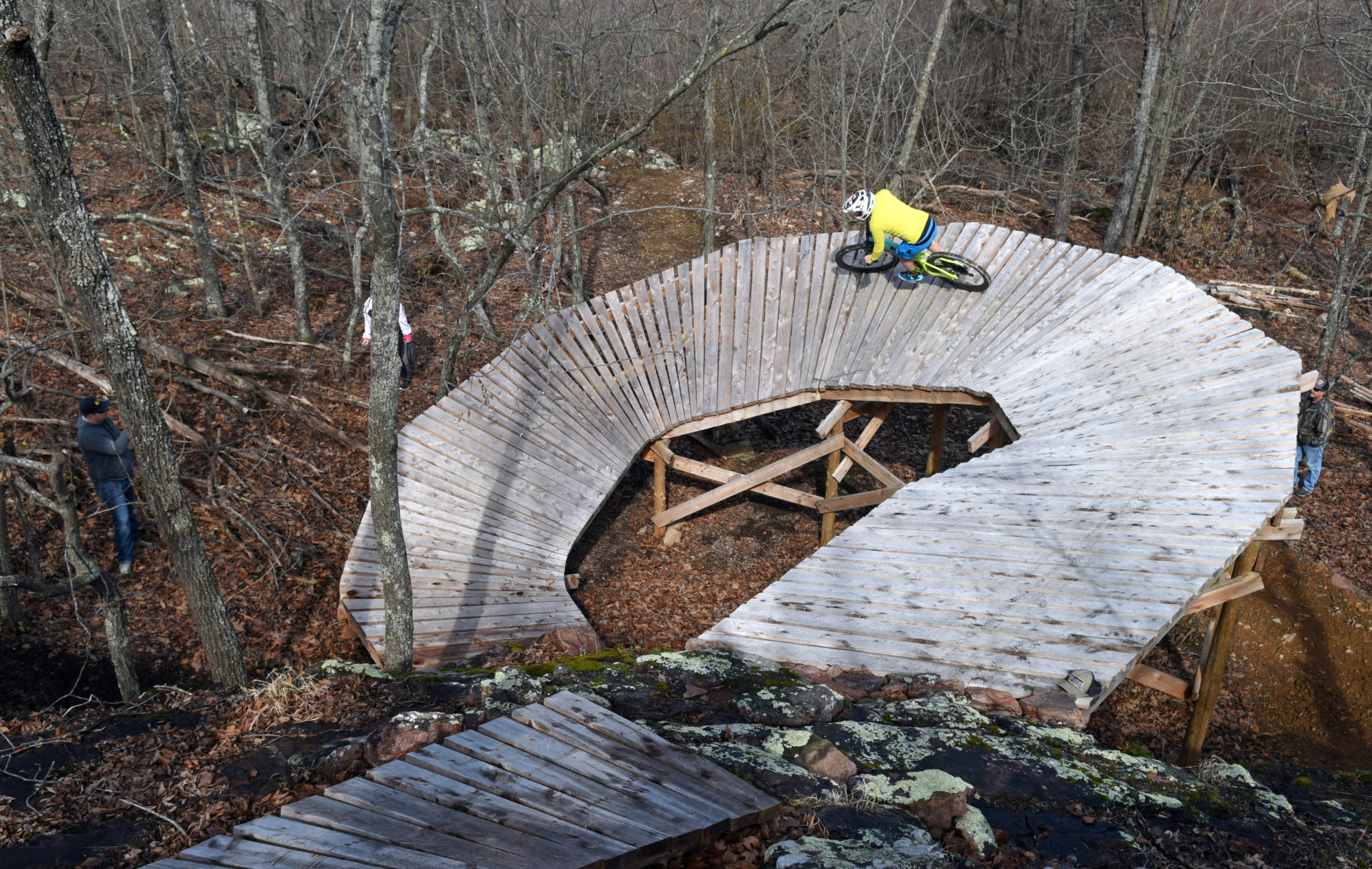 Driving through the Arcadia Valley on Highway 21, it’s hard to miss the looming presence of Shepherd Mountain. It dominates the skyline 600 feet above Ironton and is a link to the days when the town’s economy depended on mining. Now the town of 1,528 hopes the mountain represents the future prosperity of the entire region.

On April 3, Ironton’s Shepherd Mountain Bike Park officially opens to the public. The ribbon-cutting is expected to unleash a welcome influx of hardcore mountain bikers craving downhill excitement — and a corresponding influx into the economy of an area that has never fully recovered from the loss of iron and lead mining jobs.

All eyes in Missouri’s growing mountain bike community have been focused on the project since it was first announced in 2019. Missouri is home to many miles of all-terrain trails suitable for mountain biking. But the state lacked purpose-built, gravity-powered downhill trails.

That began to change during a chance encounter at a chamber of commerce meeting held at Ironton’s Fort Davidson Cafe. Klinton Silvey, a Potosi native who competes in enduro mountain bike racing when he’s not in his role as financial advisor for a local bank, was at the meeting. “I just mentioned how I thought we have the biggest hills in the state right here,” Klinton recalls. “It would be amazing if we could have mountain bike trails down them. They said, ‘Do you know a lot about that kind of stuff?’ I lied and said, ‘Yes. It’s all about vertical feet and right here you’ve got the best in the state.’” 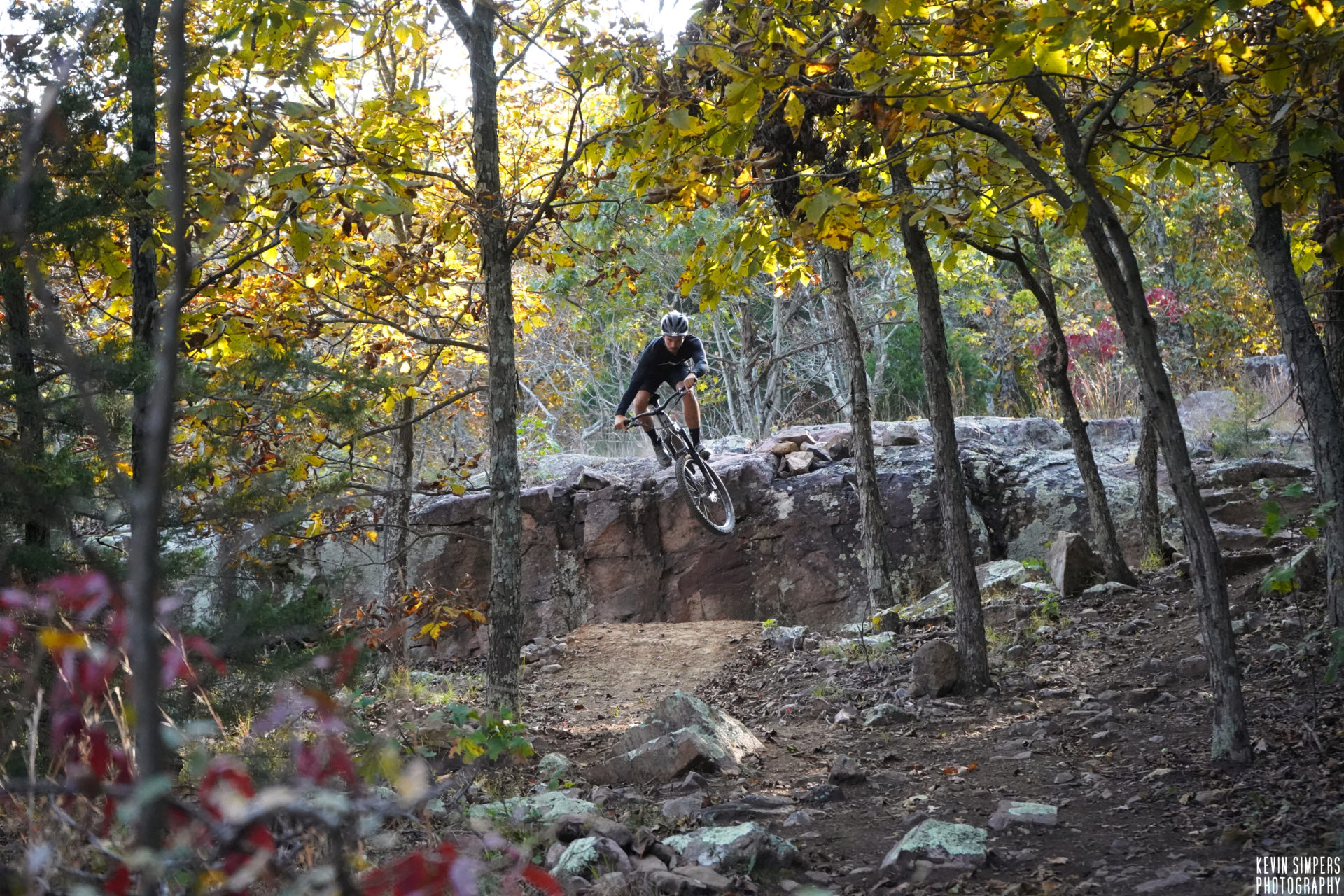 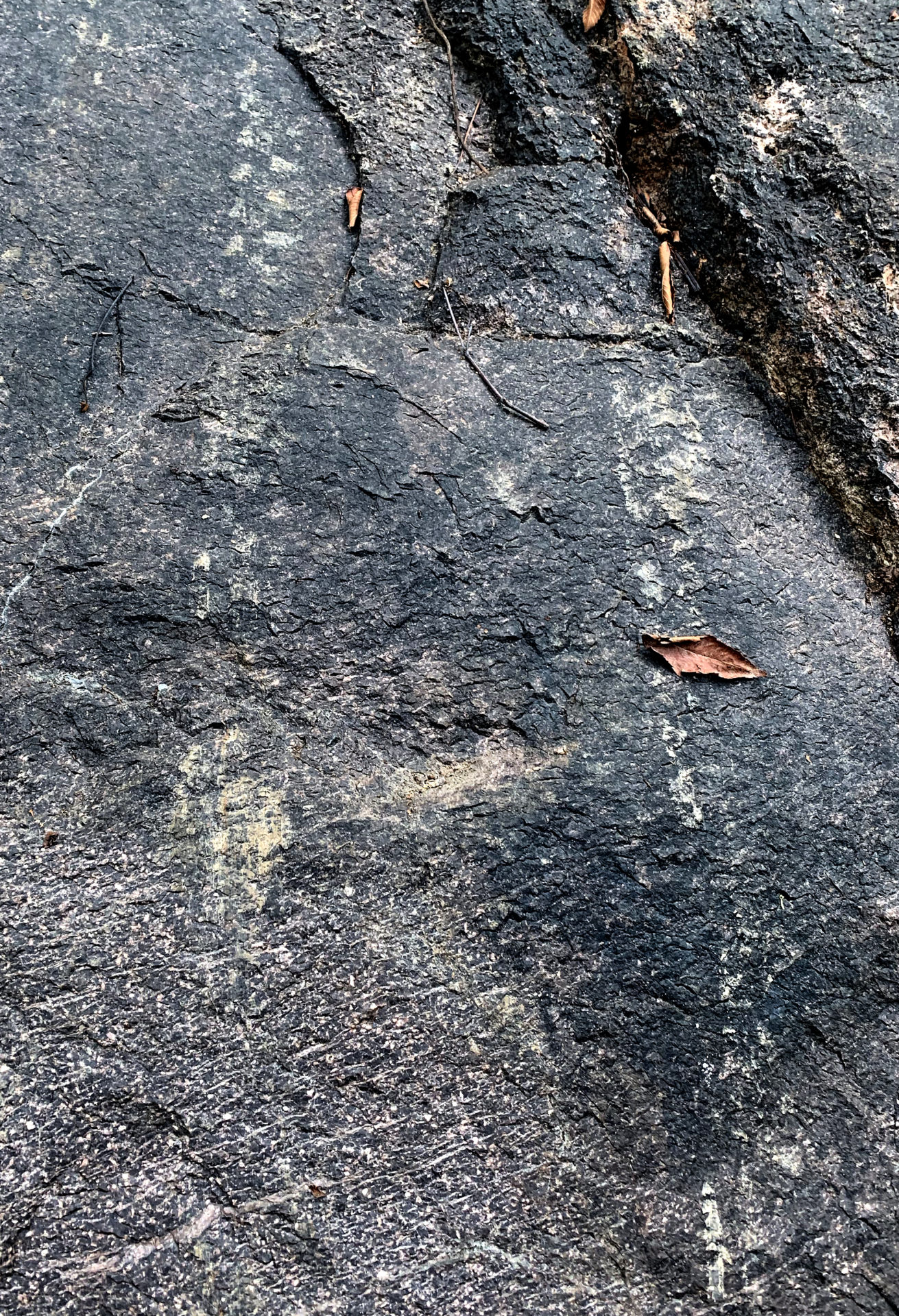 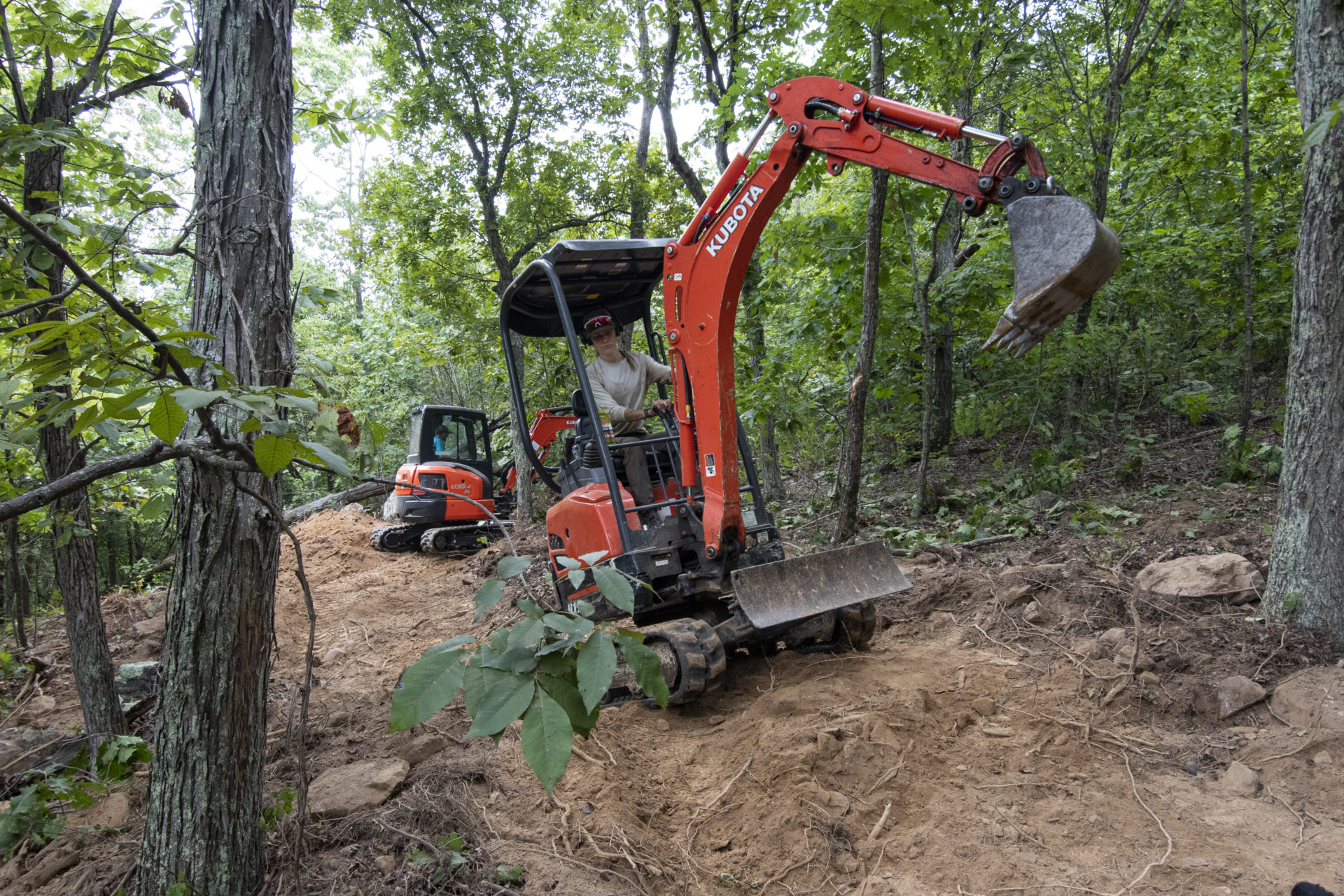 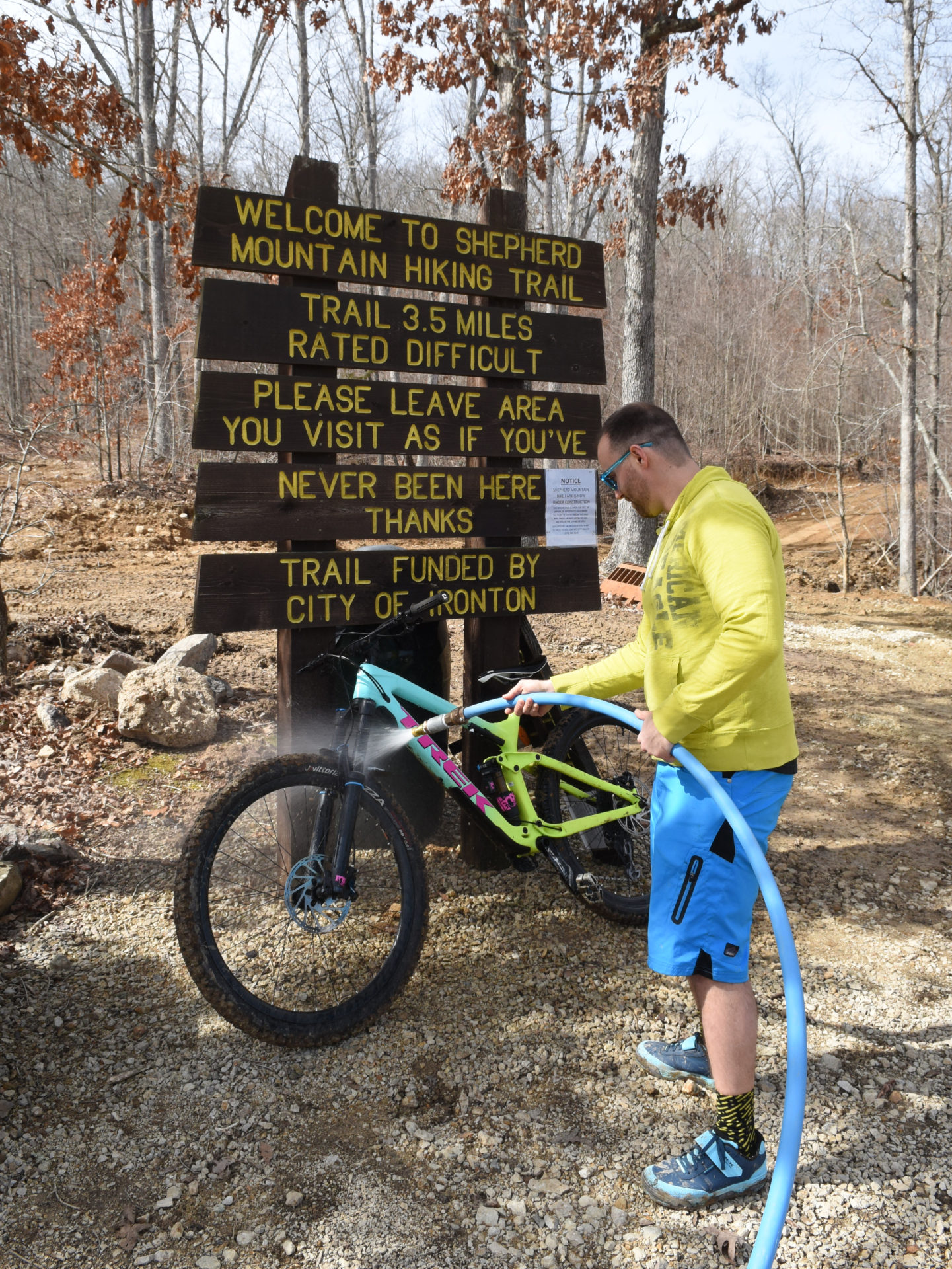 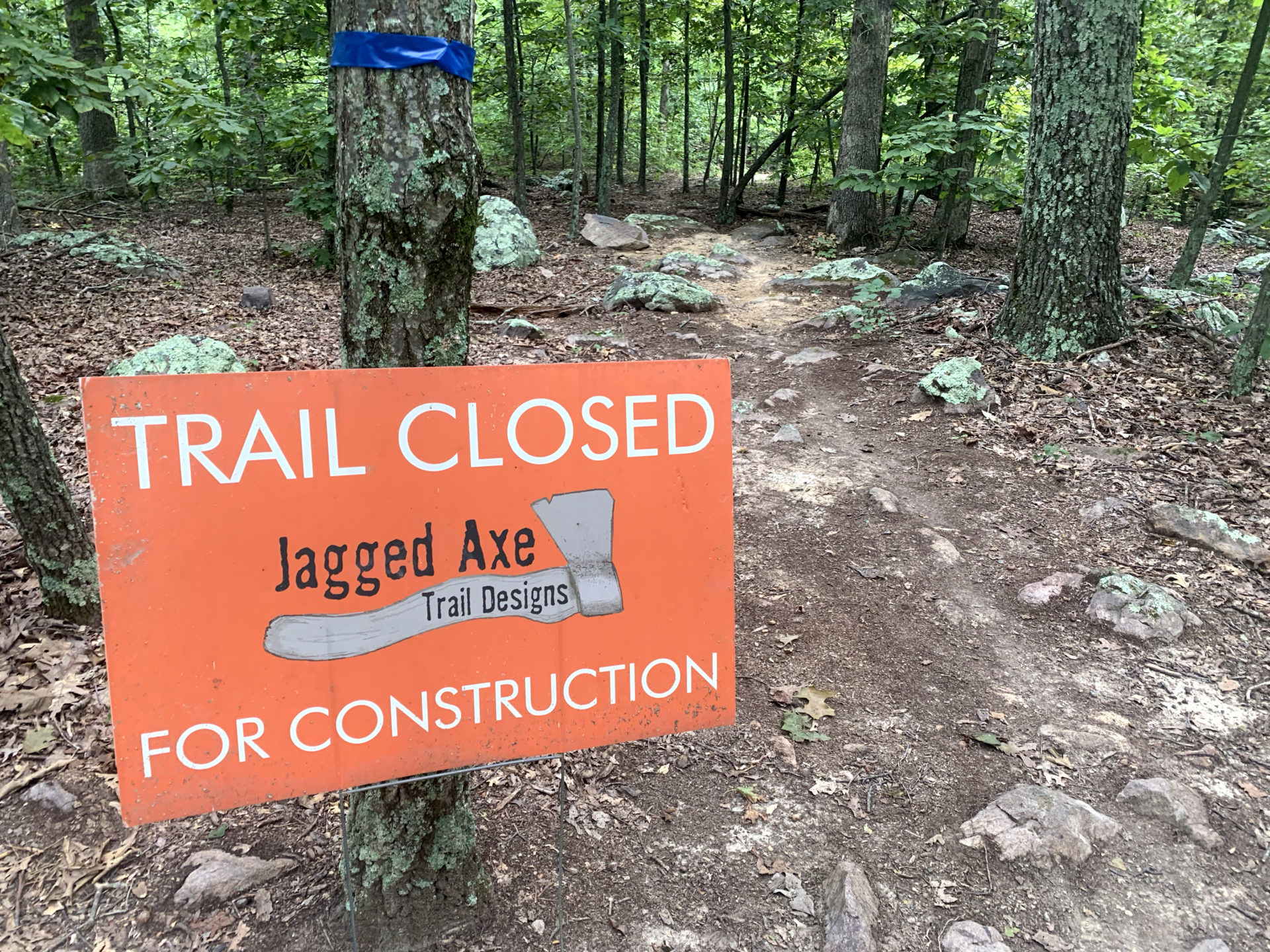 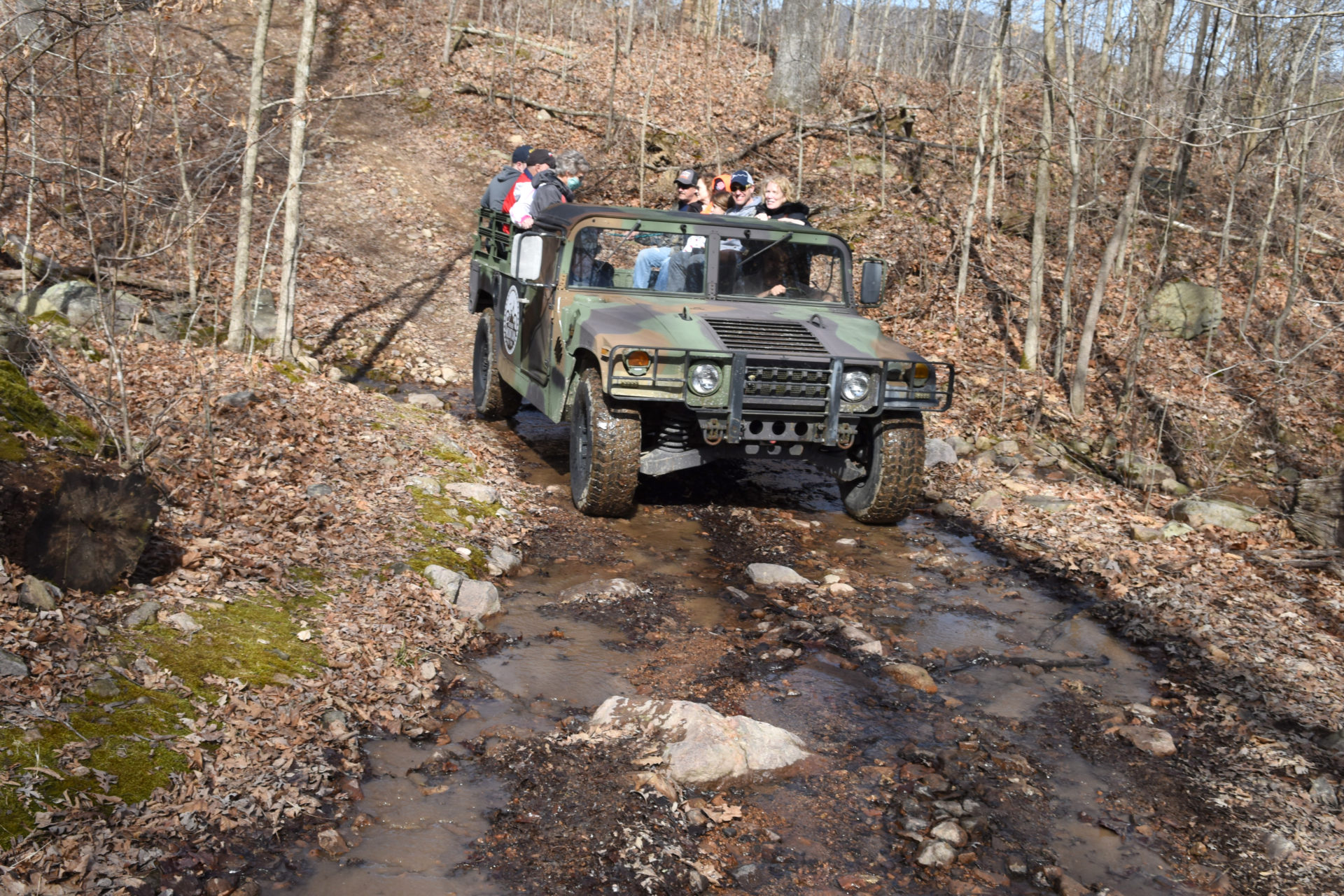 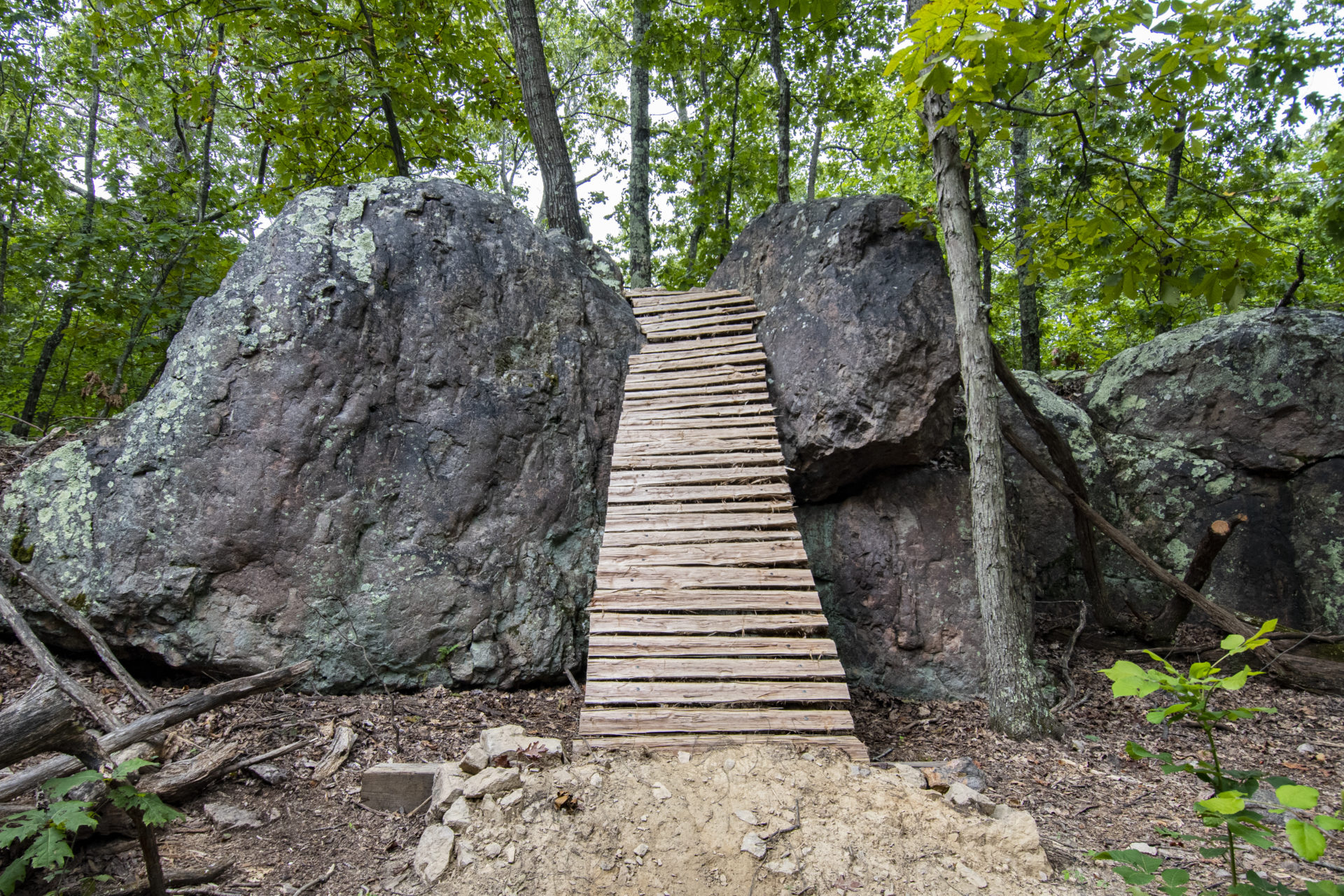 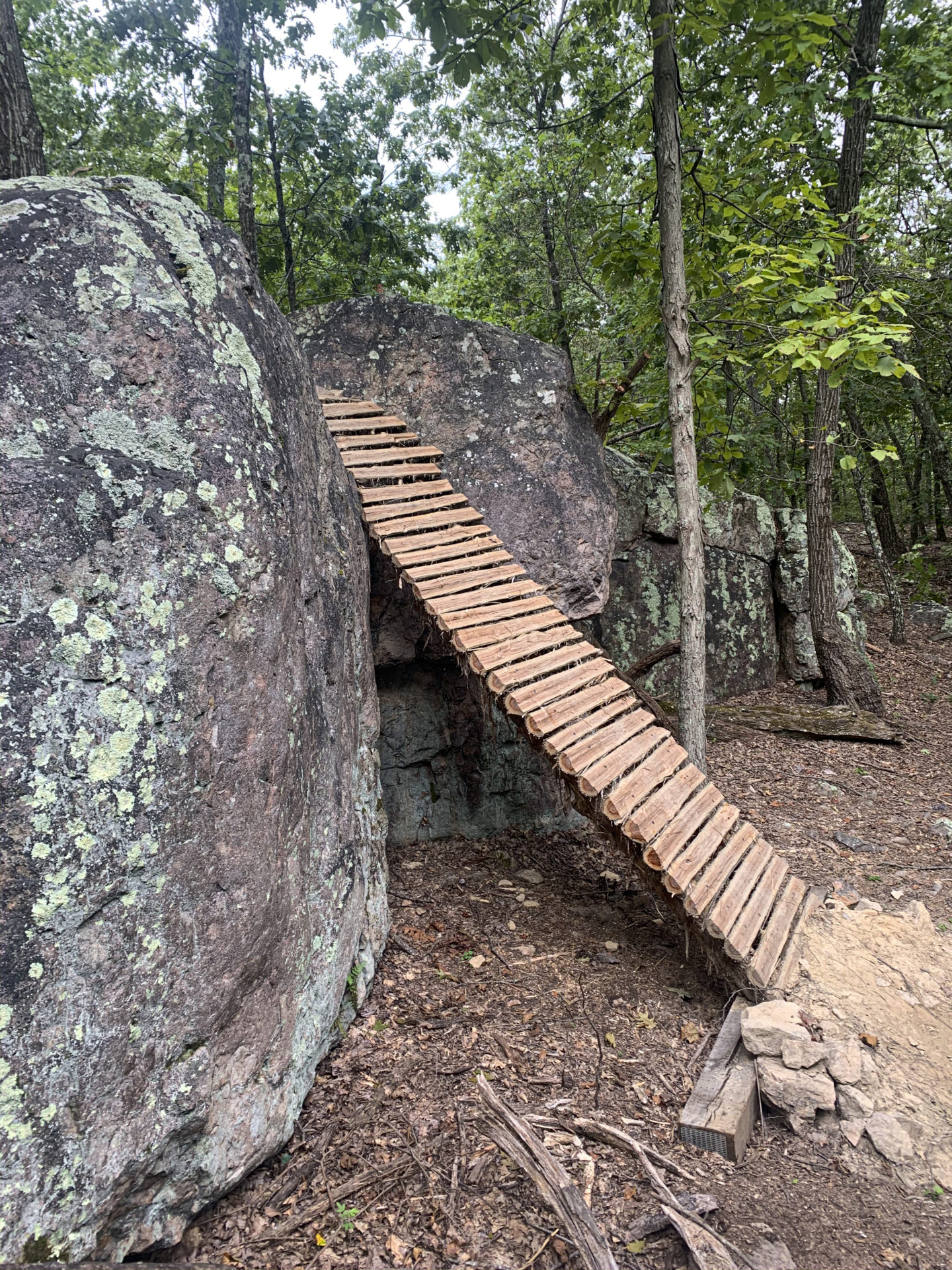 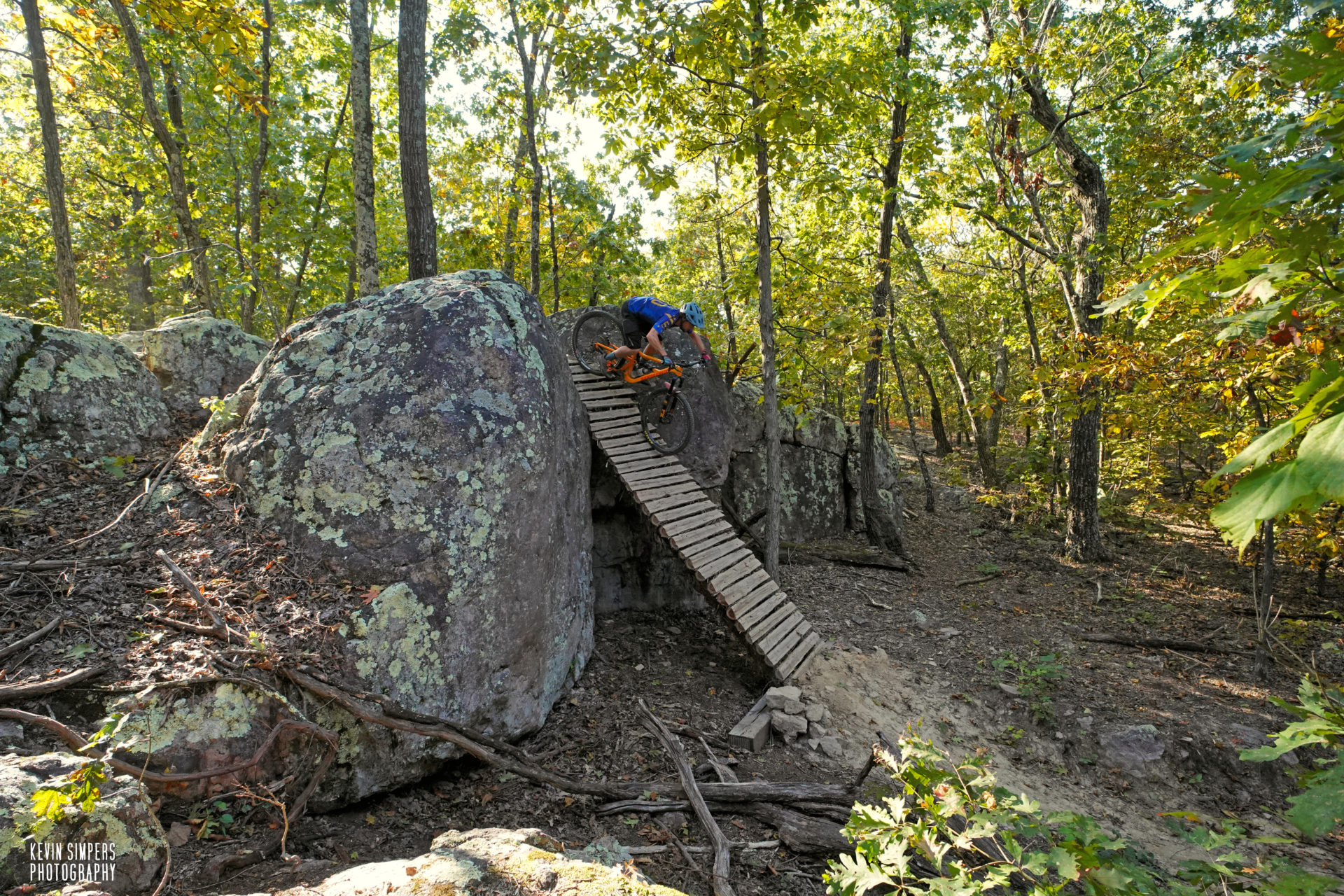 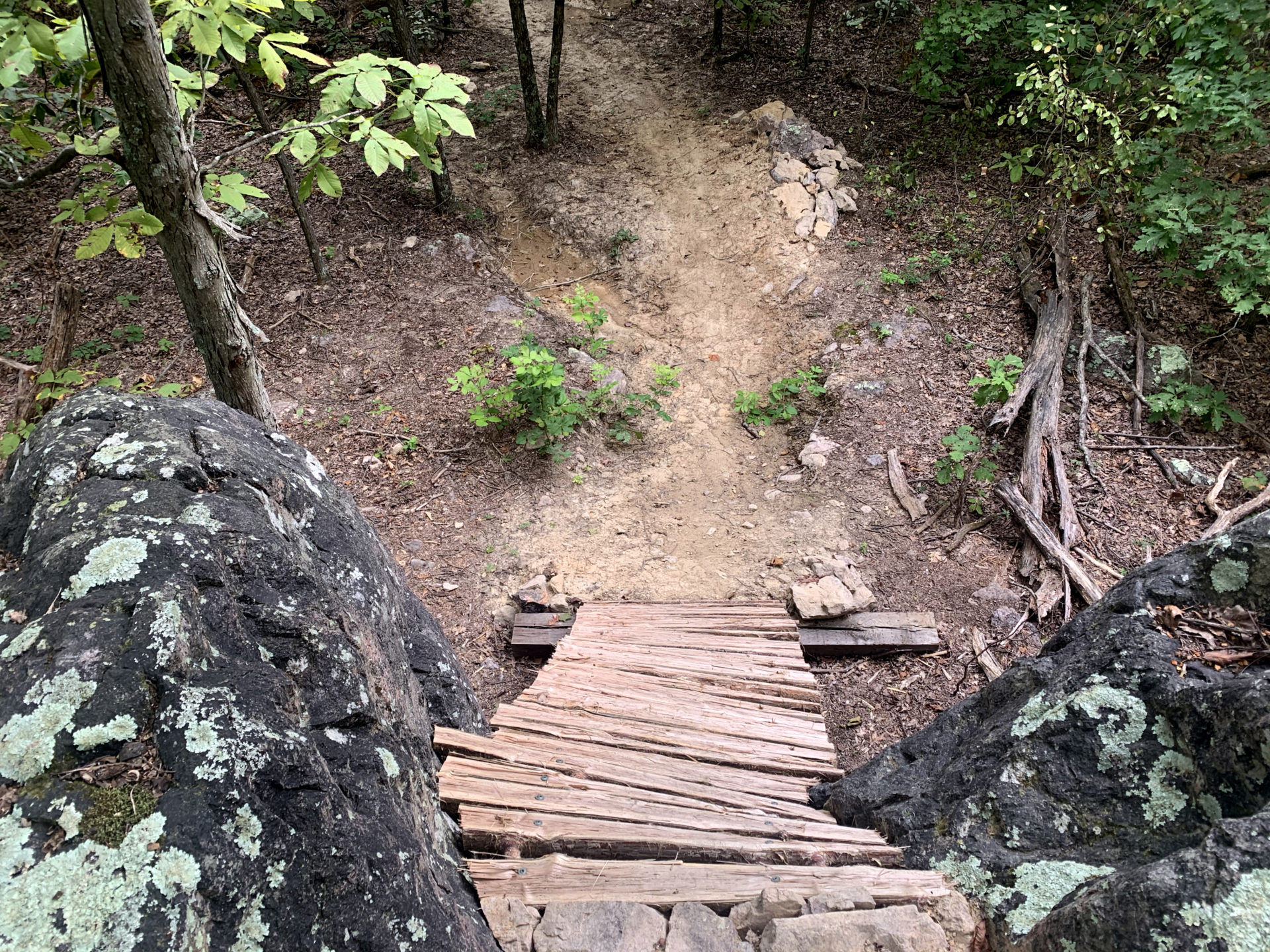 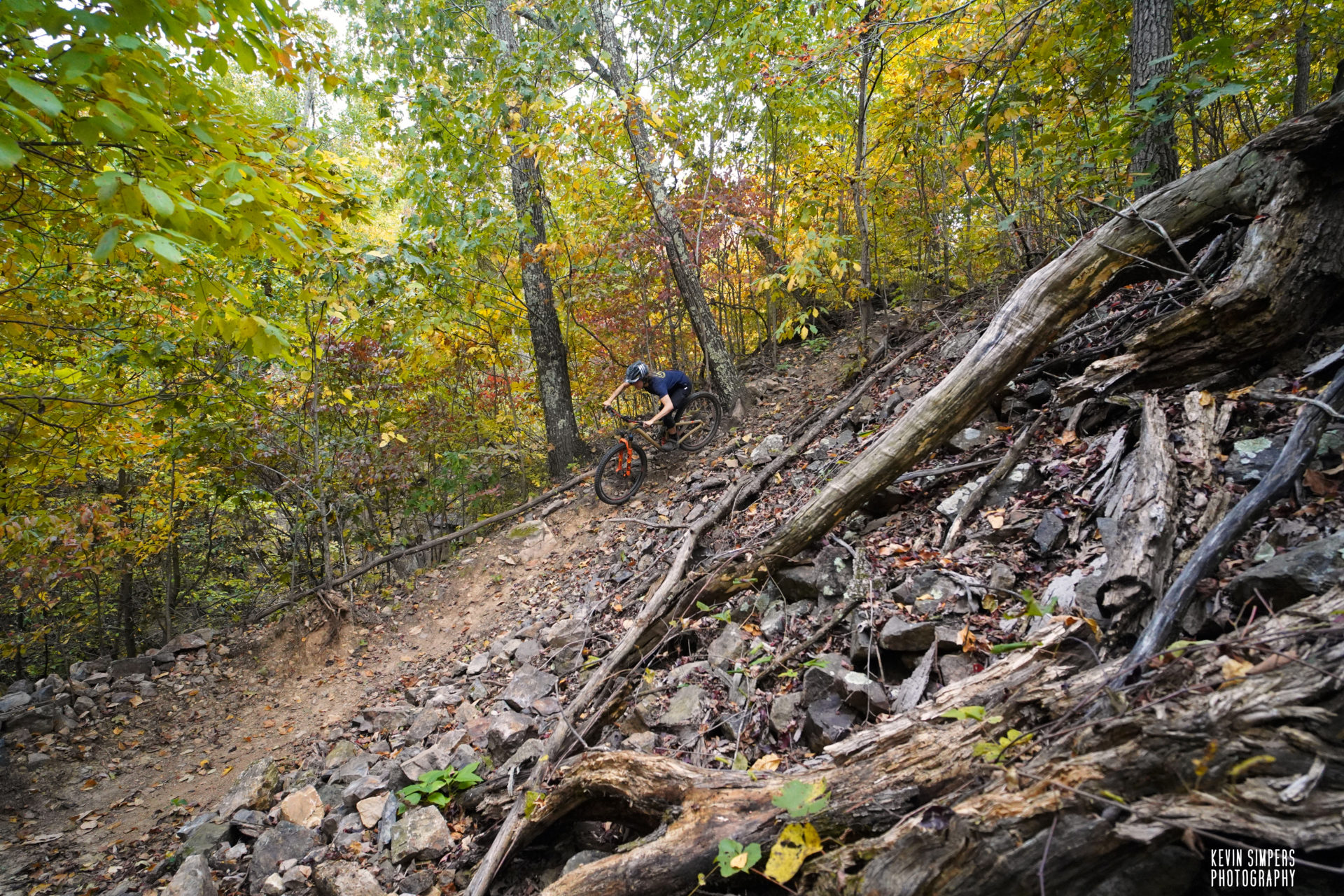 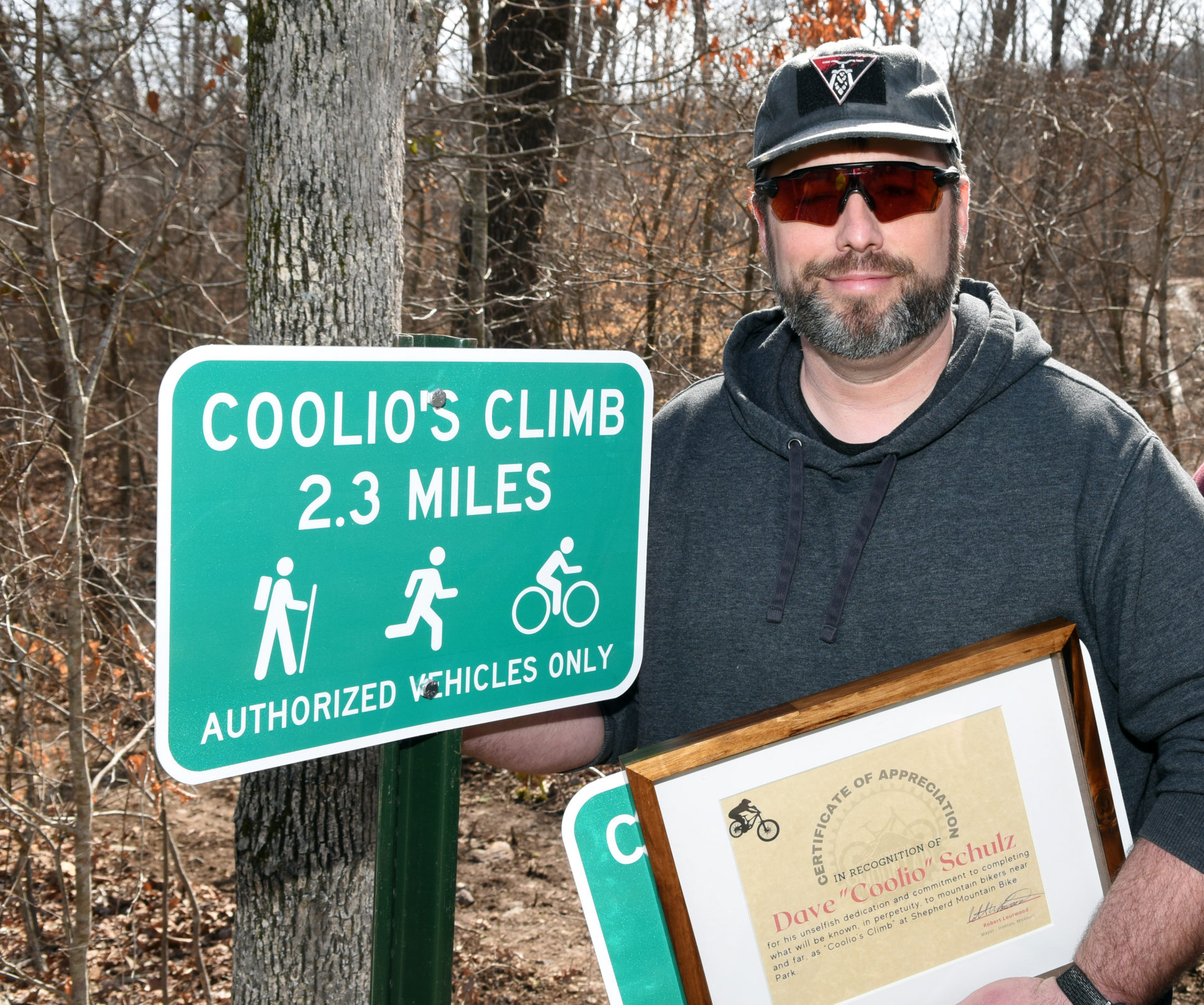 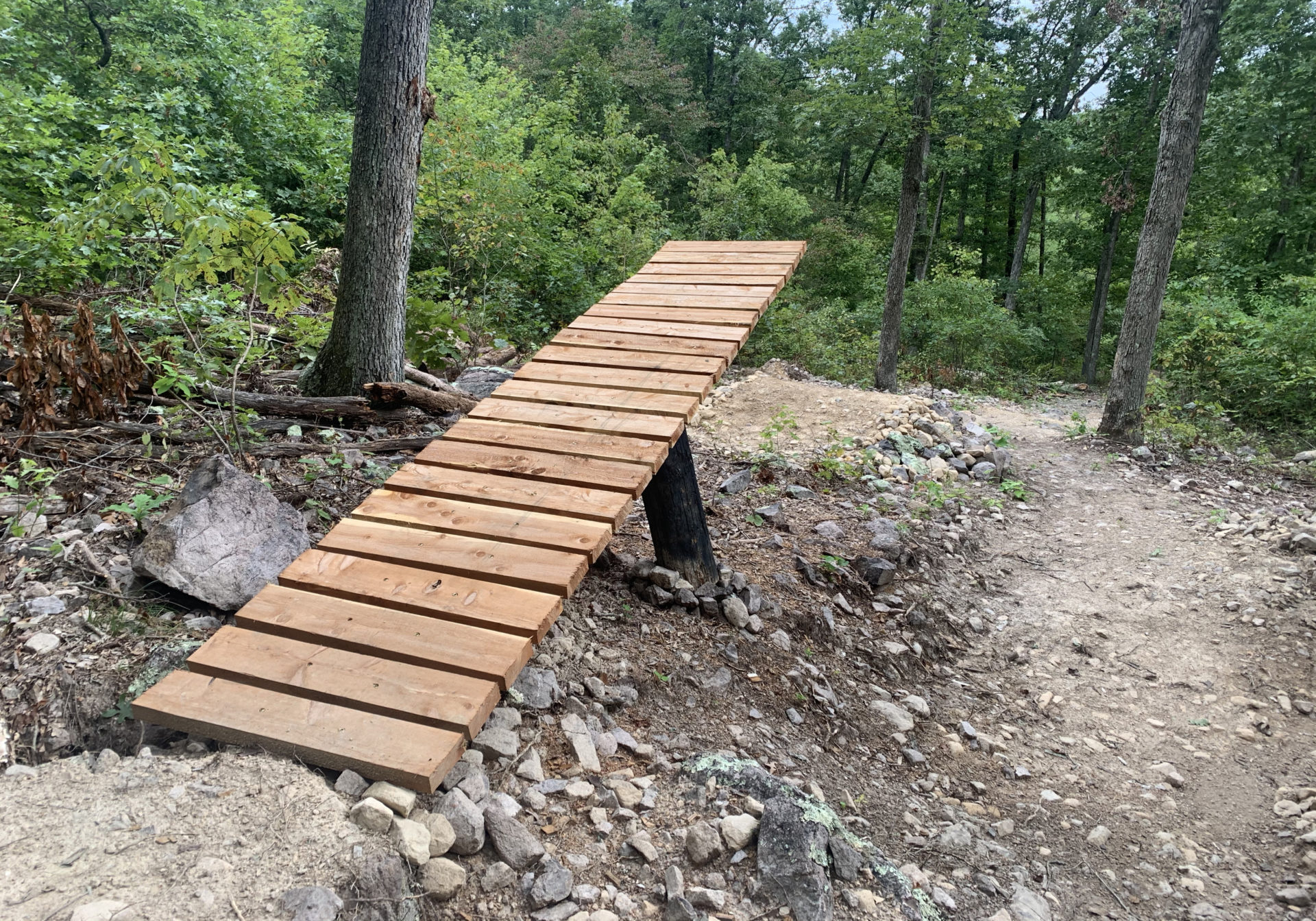 That encounter quickly led to a meeting with Ironton Mayor Bob Lourwood. This time Klinton brought reinforcements representing the Gateway Off Road Cyclists, or GORC, a trail-building group based in St. Louis.

“They were immediately receptive,” Klinton says. “They’ve been looking for a way to use Shepherd Mountain to bring tourism into the area. They had mountain biking on their radar but no one around here rides or understood what they had or the kind of trails that could be built to become a tourist destination.”

Ironton purchased Shepherd Mountain in the 1980s to protect it from clear-cutting and has been looking for a good use for it ever since says the town’s mayor. “I’ve been mayor since 2013,” Bob says. “That was one of my first objectives, to use our assets without destroying them. I looked at Shepherd Mountain and said, ‘What a great asset.’ So, we started looking at ways to utilize it. We had been known for a long time for mining. Now our economy is kind of depressed. We’ve been looking for economic development. This seems to be it.”

He says the community rallied behind the idea because it has the potential to help not just Ironton and its sister cities of Arcadia and Pilot Knob, but the entire region. Case in point, one meeting held in the summer of 2020 attracted tourism and economic development professionals from as far away as Perryville. So many people showed up the meeting had to be moved to the high school gym.

With the ball officially rolling, area leaders formed the Valley Growth Initiative. The group researched other communities that had transformed their economy thanks to mountain biking. They read studies that showed the economic impact of a bike park.

They compiled this research into a grant proposal and took it to the Iron County Economic Partnership, which administers money from the settlement made after the Taum Sauk Reservoir burst in 2005.

“It was a long process getting approval,” Klinton says. “We did tons of research. We used tons of studies that we found on mountain biking and its impact on a region. But they agreed.”

With nearly $500,000 in hand, the group hired Jagged Axe Trail Designs, an Arkansas-based company, to build the park. That would pay huge dividends later as it turned out.

“We said if you are going to do this you need to hire the most creative trail builder that we know of for this kind of riding,” Klinton says. “We made it clear that if you just build mellow trails right off the bat you are not going to draw people from very far away. Because we have hundreds of miles of that already.”

In fact, communities all over Missouri — including St. James, Neosho, Poplar Bluff, Stockton, Trenton and Warsaw, to name a few — have cross-country style trails. What the GORC advisors were calling for is highly technical, fast, rock strewn, black-diamond trails that strike terror into the average rider — along with green (novice) and blue (intermediate) downhill runs for those still honing their skills.

Half of the money went to building five trails, while the rest went to the infrastructure that makes this unlike any other cycling destination in the state. A building was remodeled to house shuttle ticket sales, a shower and bike wash. A pavilion gives riders a chance to unwind. Two Army-surplus Humvees, a truck and bike trailers were added to haul bikes and riders up the steep mountain.

Meanwhile GORC showed it had skin in the game by building the 2.3-mile climb trail, designed for riders who want to “earn their turn” and ride up to the trailhead instead of using the shuttle. Its volunteers put hundreds of hours into helping with the project.

For their part, Jagged Axe found ways to turn the mountain’s natural features, including its 1.5 billion-year-old volcanic rock, into an amazing set of trails. For example, a giant wooden “Corkscrew” built from local red cedar takes riders on a breathtaking run from the top of a sheer wall to the bottom.

Another feature on the black-diamond trail is an almost vertical descent down another outcrop that goes immediately into a series of big jumps off granite boulders, culminating in a wooden ramp called “The Cannon” that will launch riders into the sky.

But Jagged Axe’s biggest contribution to the park was introducing it to one of the principals behind Big Mountain Enduro, a Colorado company that hosts big-league enduro bike races. Big Mountain sent representatives to Ironton, where they agreed to add the park to its schedule even before the first trail was complete. The race quickly sold out.

On May 2, Shepherd Mountain will host the first race of the 2021 Big Mountain Enduro series. The event is expected to bring 350 riders into Ironton, but counting support staff, vendors and spectators, that number could swell into the thousands. By bringing the race to Ironton — its first outside the Rocky Mountains — Big Mountain gave the park its seal of approval and effectively put it on the map for the entire nation.

When it opens in April, the plan for Shepherd Mountain will only be halfway completed. Work is underway on funding Phase 2 of the project. This moves to 200 acres on the west side of Shepherd Mountain Lake, where more trails will be centered around a 50-unit campground.

“In Phase 2 we are going to focus more on cross country trails,” Bob says. “When we get completed we think we will have a family destination here.”

Trails will be extended into Ironton so that riders can pedal into town for meals and after-ride libations. One advantage for this park is its location on the doorstep of an established tourism destination, with motels, fine dining, shopping, a coffee roaster and historic sites such as the Iron County Courthouse and Battle of Pilot Knob State Historic Site.

Also in the works is a shuttle that will take non-riders to other area attractions such as Lesterville’s Black River canoeing liveries or the nearby Johnson’s Shut-ins, Elephant Rocks and Taum Sauk state parks.

“That’s our goal, to regionalize tourism,” Bob says. “All these communities have something to offer. We want to provide links from ourselves to these other communities. People are excited. The community is behind it. One analogy I like to use, it’s like a baby eating a steak. It’s going to be great if we don’t choke on it.”

While the wait for the park to open has had area mountain bikers foaming at the mouth, Ironton’s mayor says he will be content watching his grandson hurtle down the mountain. “I told these guys I will do everything I can to help build this,” he says with a laugh. “But they will never see me on it.”

You can learn more about Shepherd Mountain Bike Park and area attractions at www.visitarcadiavalley.info/mtbpark or on Facebook. The park is open to hikers and cyclists every day and is free except for shuttle tickets.