Jared’s Jams shows off its namesakes’s abilities, one jar at a time

He’s met the U.S. president and vice president, addressed the United Nations twice, hung out with Missouri’s governor and lieutenant governor and has crusaded to end hurtful words at Kirksville High School.

He serves on the Special Olympics Missouri Board of Directors and has been known to rappel off tall buildings for its benefit. As a Special Olympics athlete, he has competed in six sports and was selected for two USA Games.

Those who have met Jared Niemeyer know him as a person with many abilities. It’s hard to imagine that someone born with Down syndrome could achieve so much in his 30 years. Now Jared is bringing his name, smile and work ethic to a unique business located on the courthouse square in Edina called Jared’s Jams.

The idea for the family-owned business which opened in November 2021 came from Jared’s fundraising effort for Special Olympics.

“The whole thing began because in 2014 Special Olympics asked Jared to speak at the United Nations,” says his proud mom, Brenda. “He came back from that experience so amazed and appreciative of the opportunity that he asked us how he could give back to Special Olympics.”

The family — which also includes dad, Dan, and older brother, Josh — brainstormed and came up with the idea of selling jam made from a recipe passed down from Jared’s grandmother. Jared adds that there was another reason he picked jam for his fundraiser: “I like jam a lot,” he says. “My favorite is cherry and blueberry.”

The jam was initially made from fruit grown on the family farm and was sold at the Kirksville Kiwanis Farmers’ Market. After two years, Jared managed to donate $6,000 to Special Olympics. 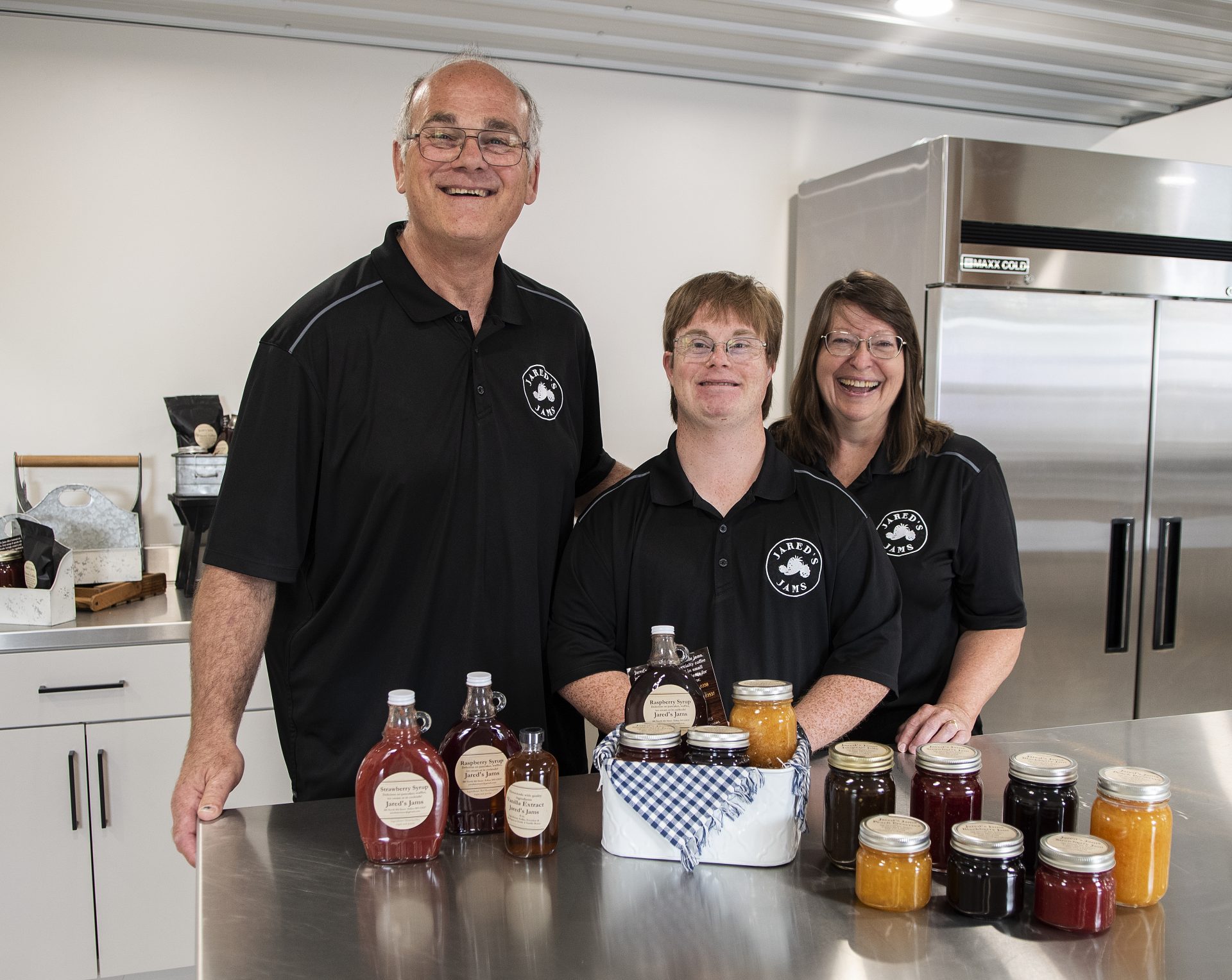 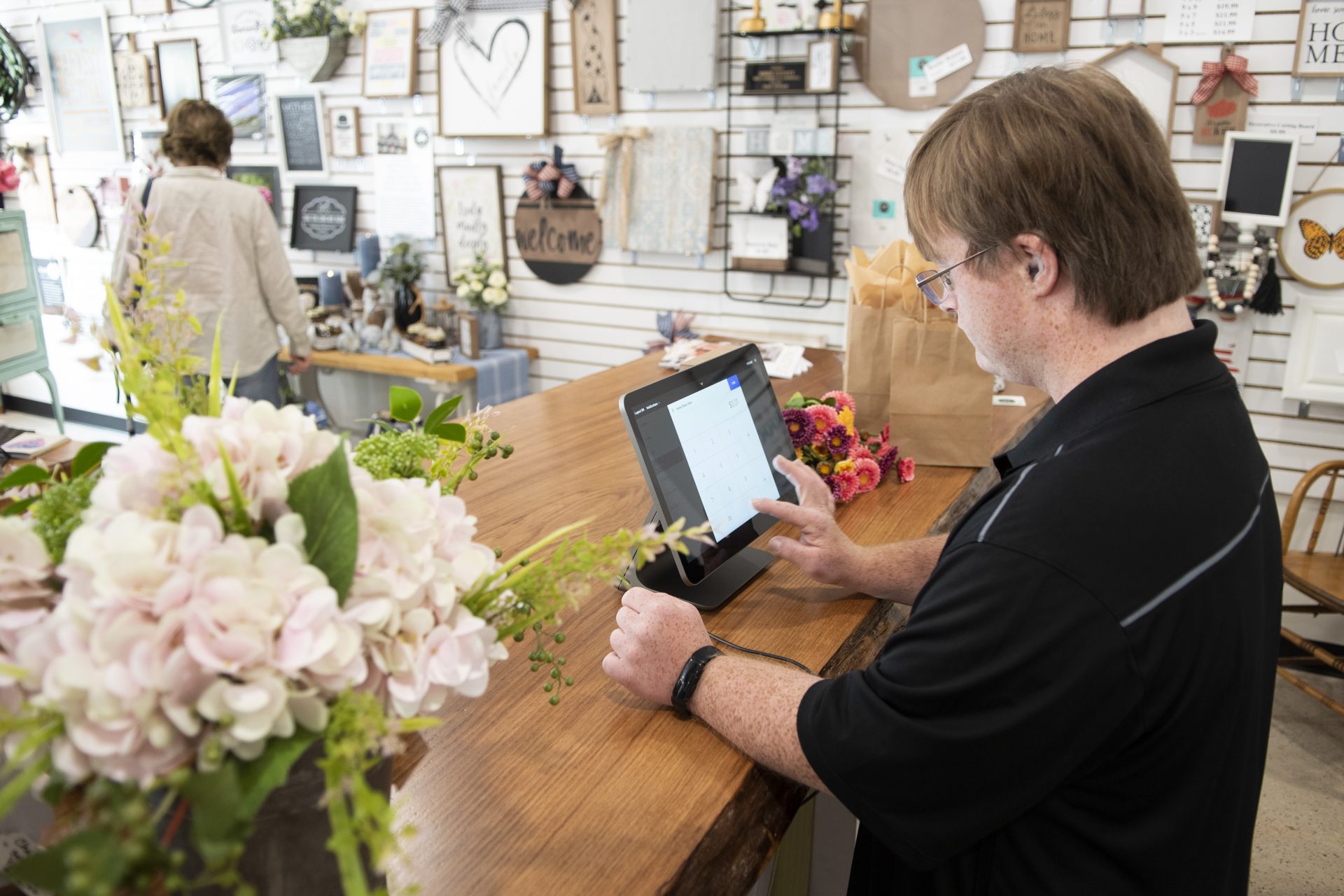 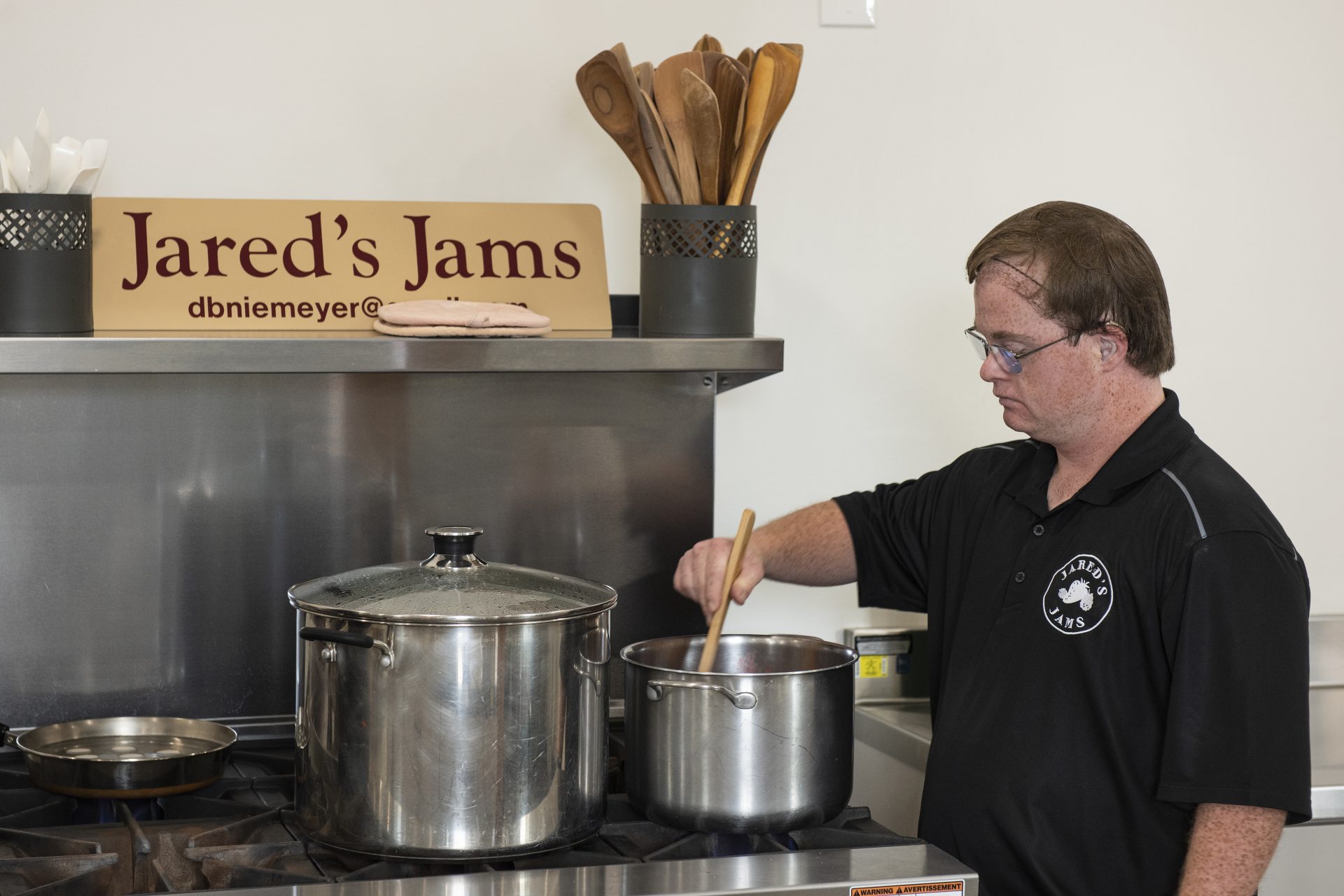 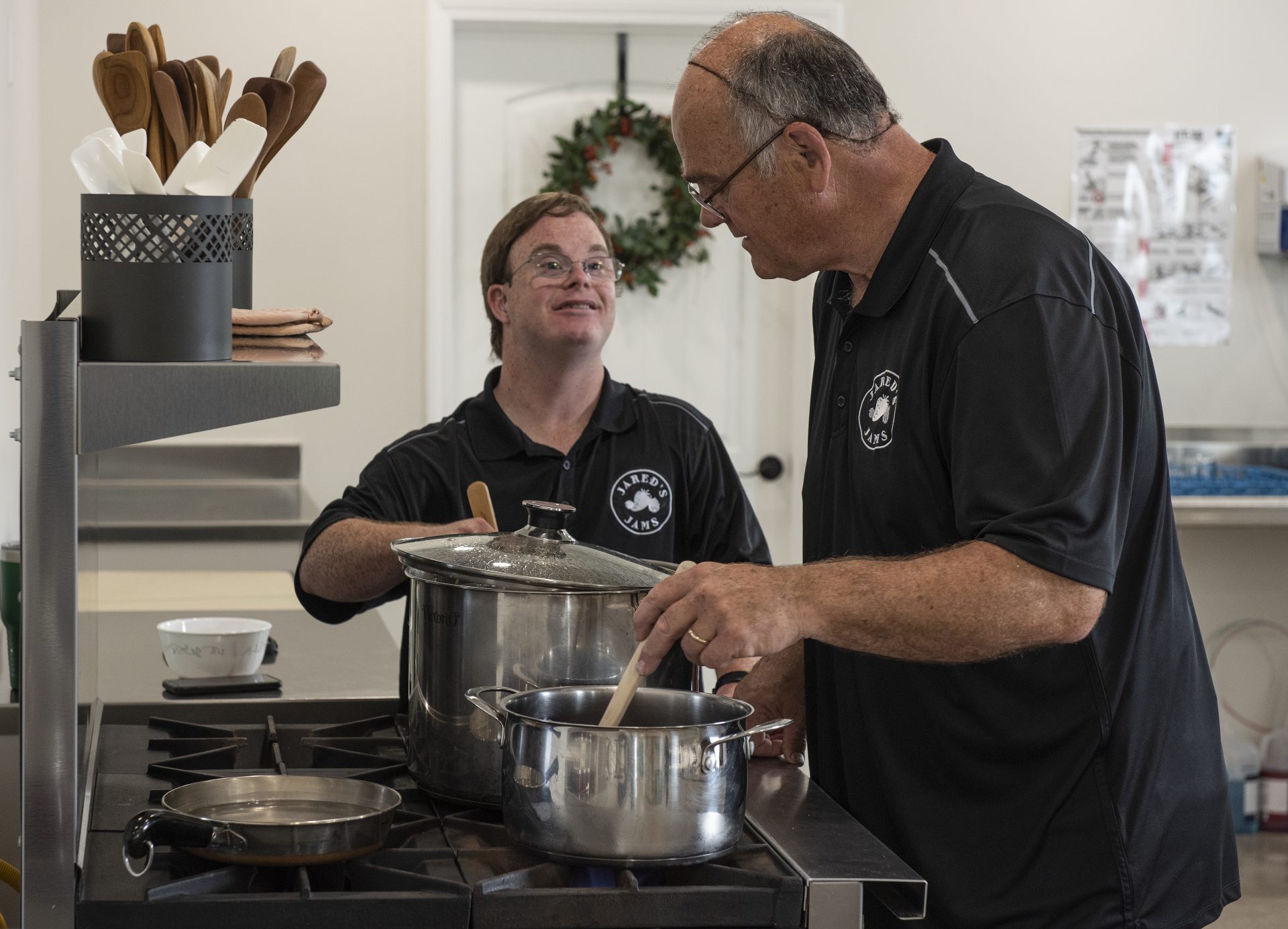 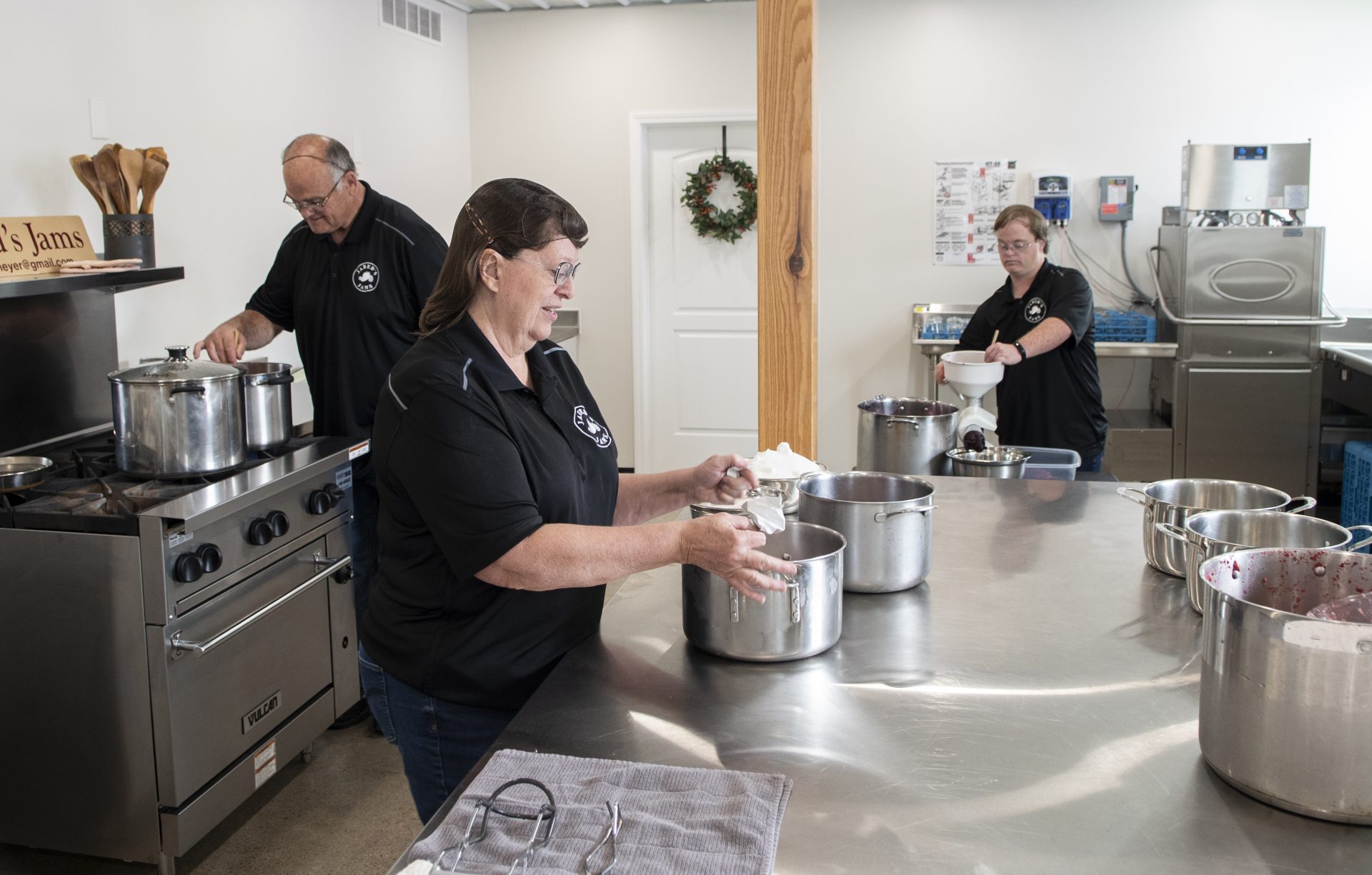 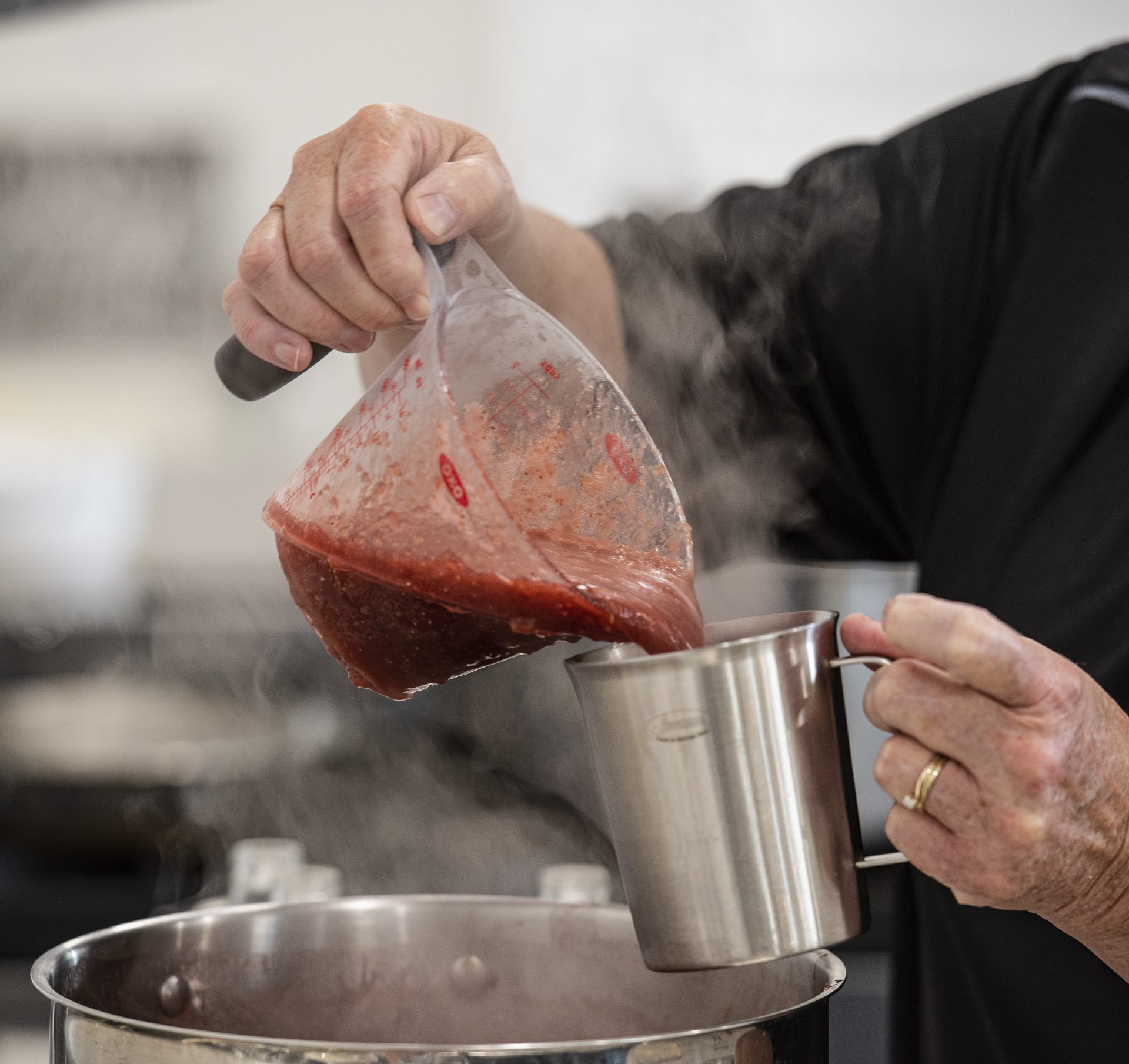 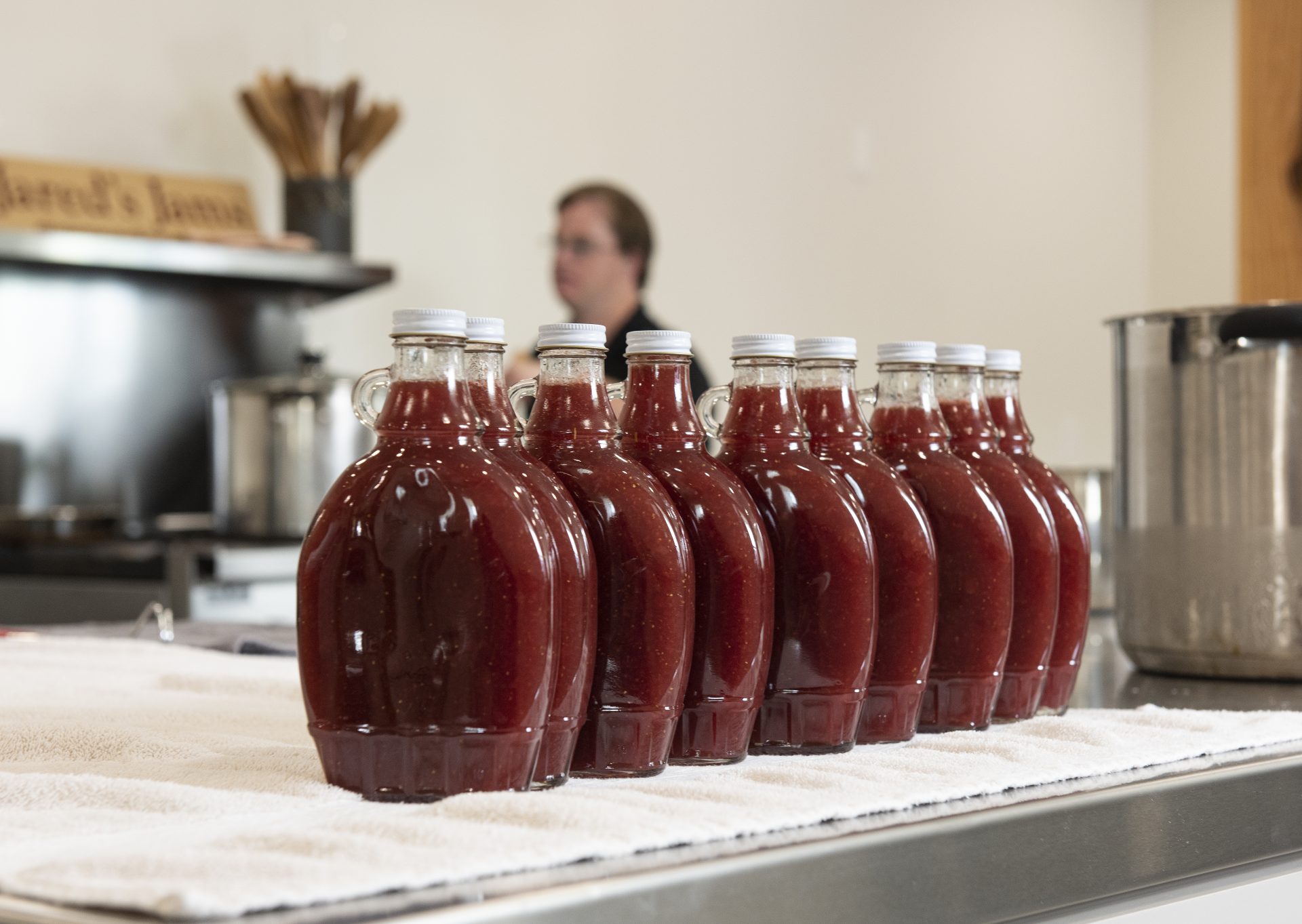 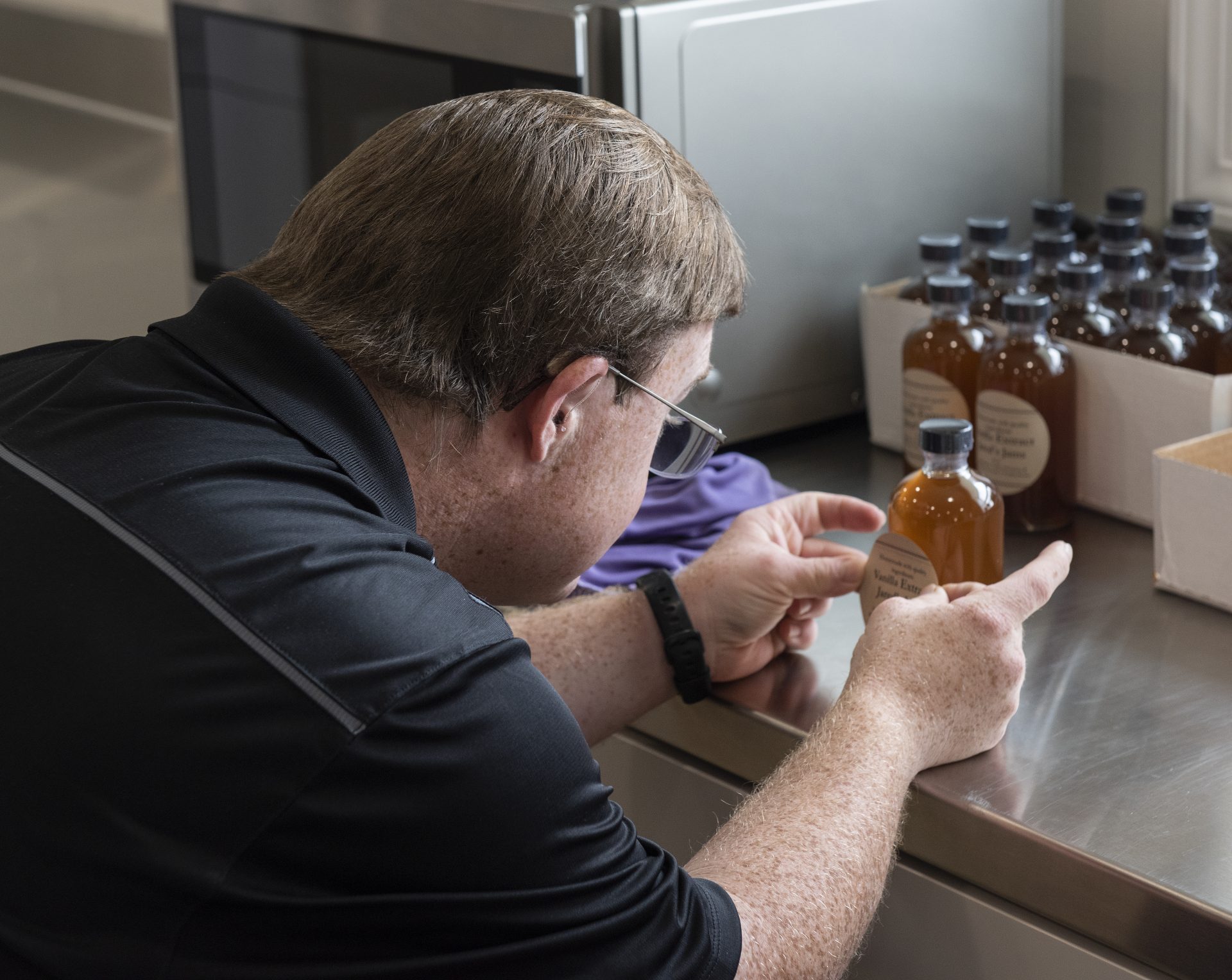 The jam was initially made from fruit grown on the family farm and was sold at the Kirksville Kiwanis Farmers’ Market. After two years, Jared managed to donate $6,000 to Special Olympics.

Jared’s success in those 2 years prompted his family to transition Jared’s fundraising initiative into a small business that donates regularly to Special Olympics Missouri.

Six years later, as the Niemeyer’s were approaching retirement from their careers, they were encouraged by Kim and Les Cardwell, who opened a successful woodworking business called Hardwood Xpress on the Edina square. The Niemeyers bought a nearby old building that was once a hatchery and renovated it from the inside out.

Ultimately, they created a gift shop in the front that sells Brenda’s crafts, storage in the back and in the middle built an FDA-approved kitchen with gleaming white walls and stainless-steel countertops.

“The goal was to take that next step,” says Dan of the business that grew from Jared’s fundraiser. “To do that we had to have an FDA-approved kitchen. So that allows us to have a website with a sales page, and ship across state lines or cross state lines to vendor events.”

Three or four days a week, you can find Jared, Brenda and Dan at the business making jam from all kinds of fruit and berries. “We make small batches in order to maintain that flavor and keep it fresh,” Brenda says. They keep things simple, with just three ingredients in their jams: fruit, pectin and sugar. The latter is kept to a minimum so the natural flavor shines through in every bite.

They might turn out 500 to 700 jars a month, Dan says, adding, “We have no intention to compete against Smuckers. That’s not our deal. The flavor and the price and the quality of our product is what we’re after. The small batches the way Grandma made it is the big difference.”

But the kitchen was designed with more in mind than making jam. “We wanted it to hopefully provide an income for Jared when we are gone,” Dan says. “But at the same time, it’s a commercial kitchen we can rent to others. There’s nothing like this in this area at all.”

One local woman uses the kitchen to make casseroles which are sold to busy families in need of a quick meal. The kitchen was used by the Edina Chamber of Commerce to make chocolate-dipped strawberries for Valentine’s Day. The Niemeyers, members of Lewis County Rural Electric Cooperative, demonstrated how to make vanilla extract for the local 4-H club and they also offer cooking classes.

“Our other purpose was for the schools in Kirksville and Knox County to have a work program for their students with disabilities,” Brenda says, adding that COVID has delayed this plan. “So those students can come in for an hour or two and do a work-experience class so when they graduate they’re a little more prepared for being out on the job.” Toward that goal, a coffee shop is in the works and should be open for business in early August.

Similar training helped Jared land a job at Hy-Vee in Kirksville, where he’s worked for 11 years. Dan and Brenda hope to share the training that led to his success with others. “When we were in school, individuals with disabilities were in a building over there,” Dan says. “We may not have known they even existed. Now with inclusive education, with inclusive employment, they are part of the community.”

That’s how Jared was raised. He joined his brother in 4-H and FFA, and was active in school, St. Joseph Catholic Church and the Knights of Columbus and got involved with Special Olympics at an early age. His life has been defined by his abilities, not his Down syndrome.

He’s the kind of person any business would be proud to employ. At the store, Jared rattles off the list of jams available while steadily turning the crank that removes the seeds from a big batch of blackberries: “Apple butter, peach, cherry, red raspberry, strawberry, blueberry, blackberry, elderberry.” In addition, there’s syrup made from strawberries, raspberries and other fruits as available.

Not to be left out, Jared’s brother, Josh, created a line of flavored coffees that are also sold in the store. These include chicory, cacao and cardamom. Also for sale is homemade vanilla extract made from Madagascar beans steeped in a vodka base and sold in 8-ounce jars.

Everything here is made the same way: small batches, laboriously handcrafted by a family working together the way things were done on farms for generations. Jared is involved in the entire process, from removing the seeds, to cooking down the berries to ensuring each label is put on the jar perfectly. He works the cash register, answers questions and, ever the gentleman, carries orders to the car for his customers.

Besides making customers happy with their delicious products, Jared’s Jams is putting Edina on the map once again. They are part of a revitalization of the Knox County seat’s historic downtown, which includes many Victorian buildings just begging to be restored and repurposed.

“If that’s a side result of this, we are delighted with that, because giving back is important,” Brenda says. “We’ve been very blessed and fortunate. And if we can help others in any way, when one of those is by making our kitchen available, then that is what we are going to do.”

You can find Jared’s Jams at 106 North 4th St. in Edina. The store is open Tuesday through Saturday. For more information, call 660-341-0358, visit www.jaredsjams.com or find them on Facebook.

This is one of nearly 500 Missouri companies that are part of the Buy Missouri initiative created by Lt. Gov. Mike Kehoe. To find Missouri-made products or to enroll your business visit www.BuyMissouri.net.