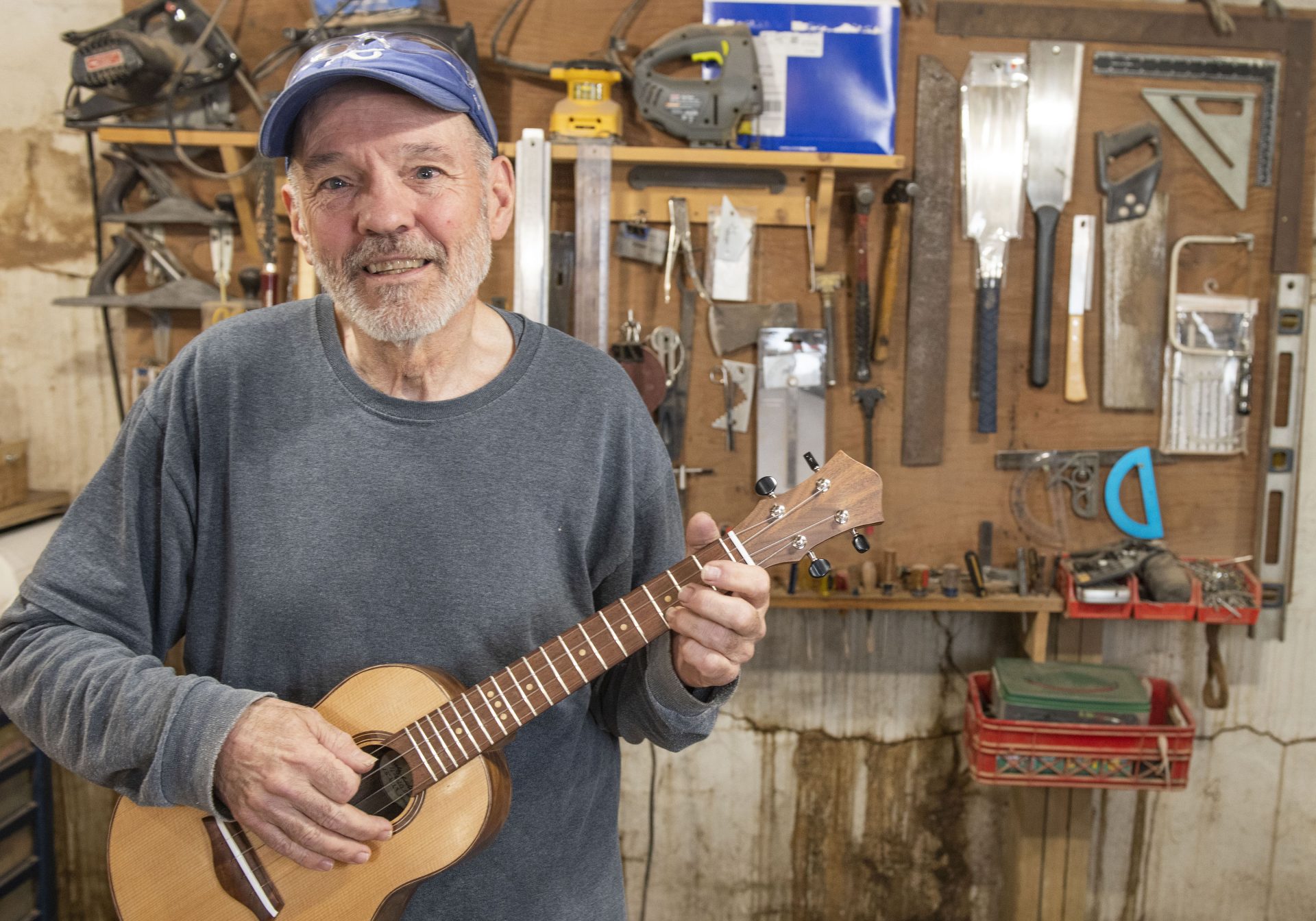 The story has been the same for Kelly Stillfield ever since he picked up his most recent hobby, to put it lightly, more than a decade ago. He peruses musical instrument social media pages and message boards full of people looking for custom-made pieces. He’ll bypass the request for the standard cigar box guitar or ukulele until he finds the person looking for a Prince-themed electric ukulele patterned after the guitar the musician played.

“I get back to them and tell them ‘that’s right up my alley,’ ” he says. “Then we start talking and texting and come up with a plan. That’s the quirky stuff I’m into.”

Kelly is a mechanic by trade, but has taken to building a myriad of string instruments in the basement of his Maysville home. He specializes in one-of-a-kind instruments that pay homage to the owner’s interests.

It started for Kelly while working in Des Moines, Iowa in his 20s. “We had a family friend that had a banjo. An heirloom family banjo. And I thought that was the coolest thing ever. So I built that thing,” the United Electric Cooperative member says pointing to the decades-old instrument in his kitchen. “Just built it on a shoestring budget and a whim.”

He moved back to his hometown of Maysville and when his son was in high school jazz band playing electric bass guitar, he was intrigued. 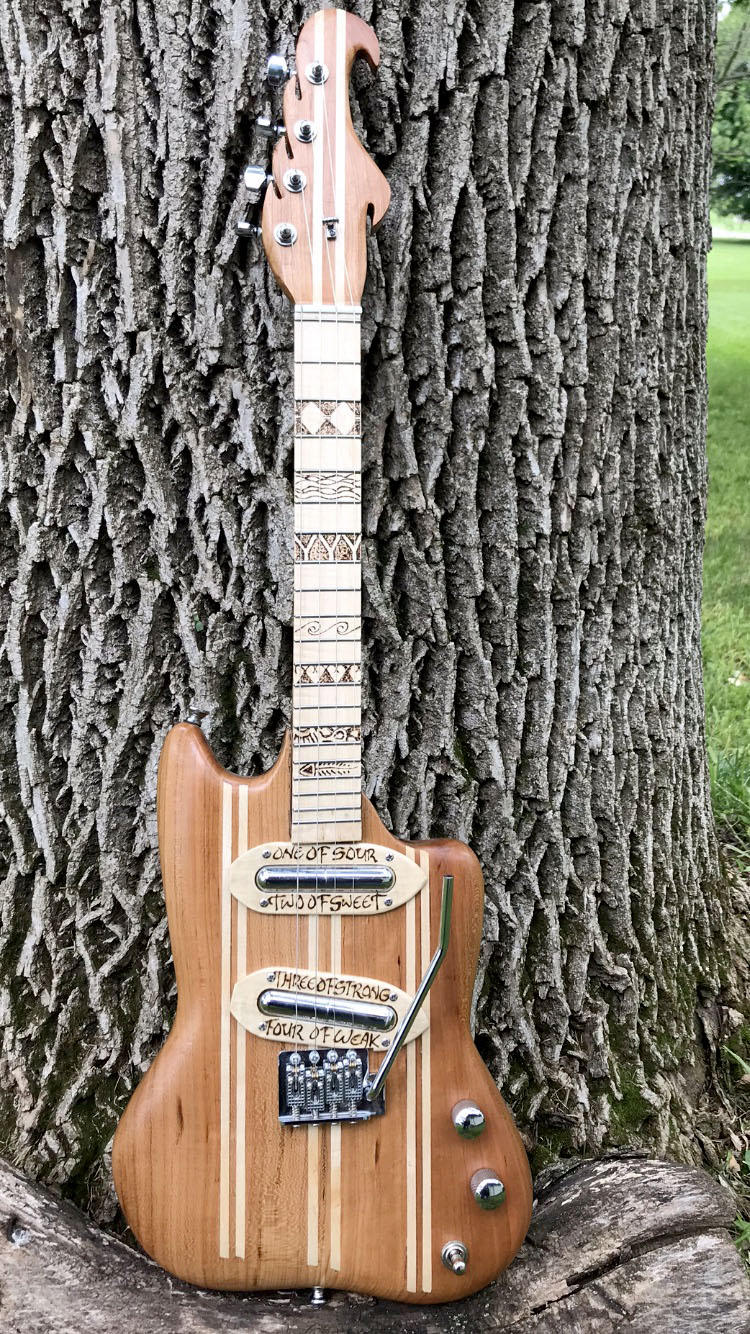 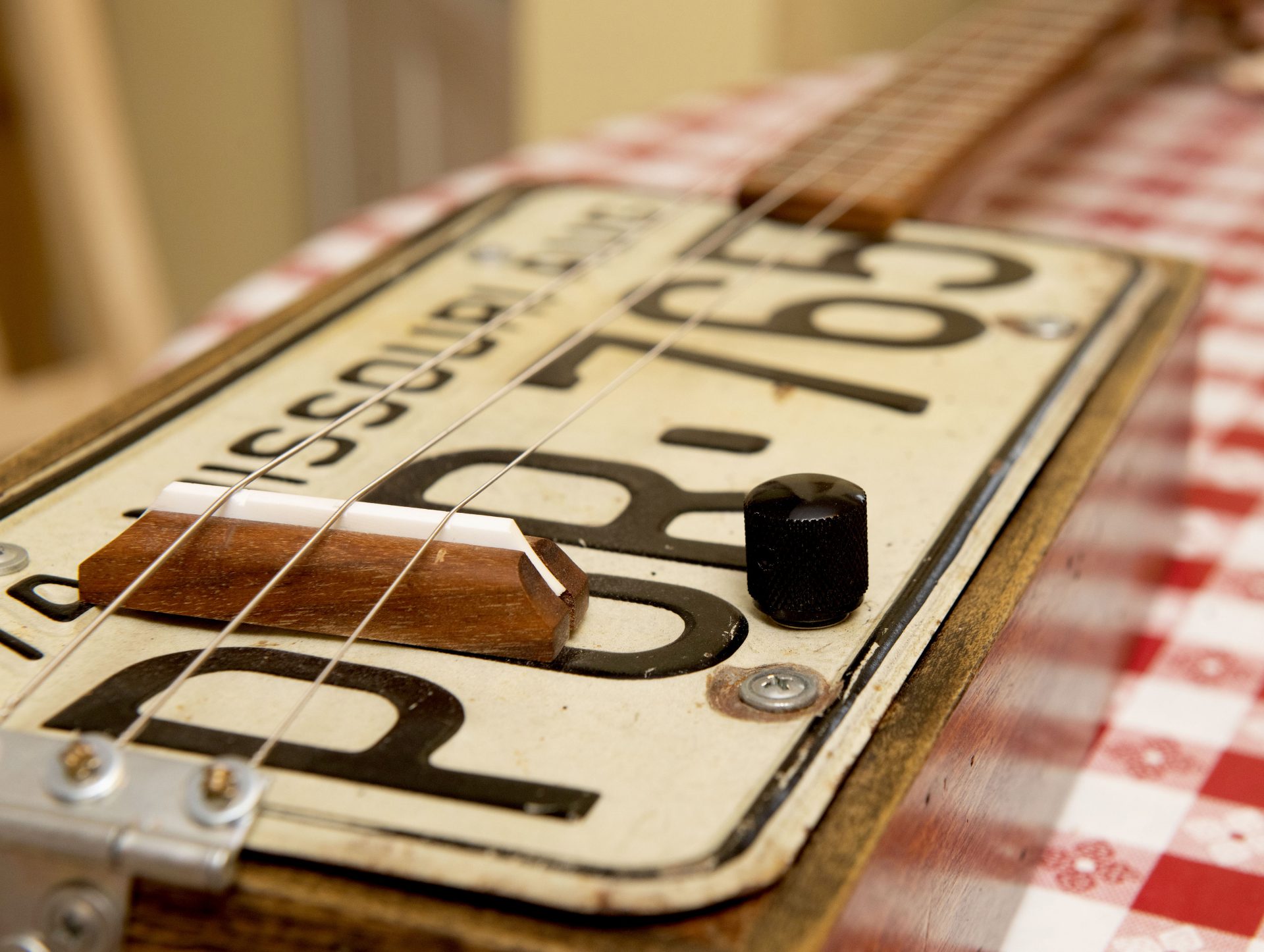 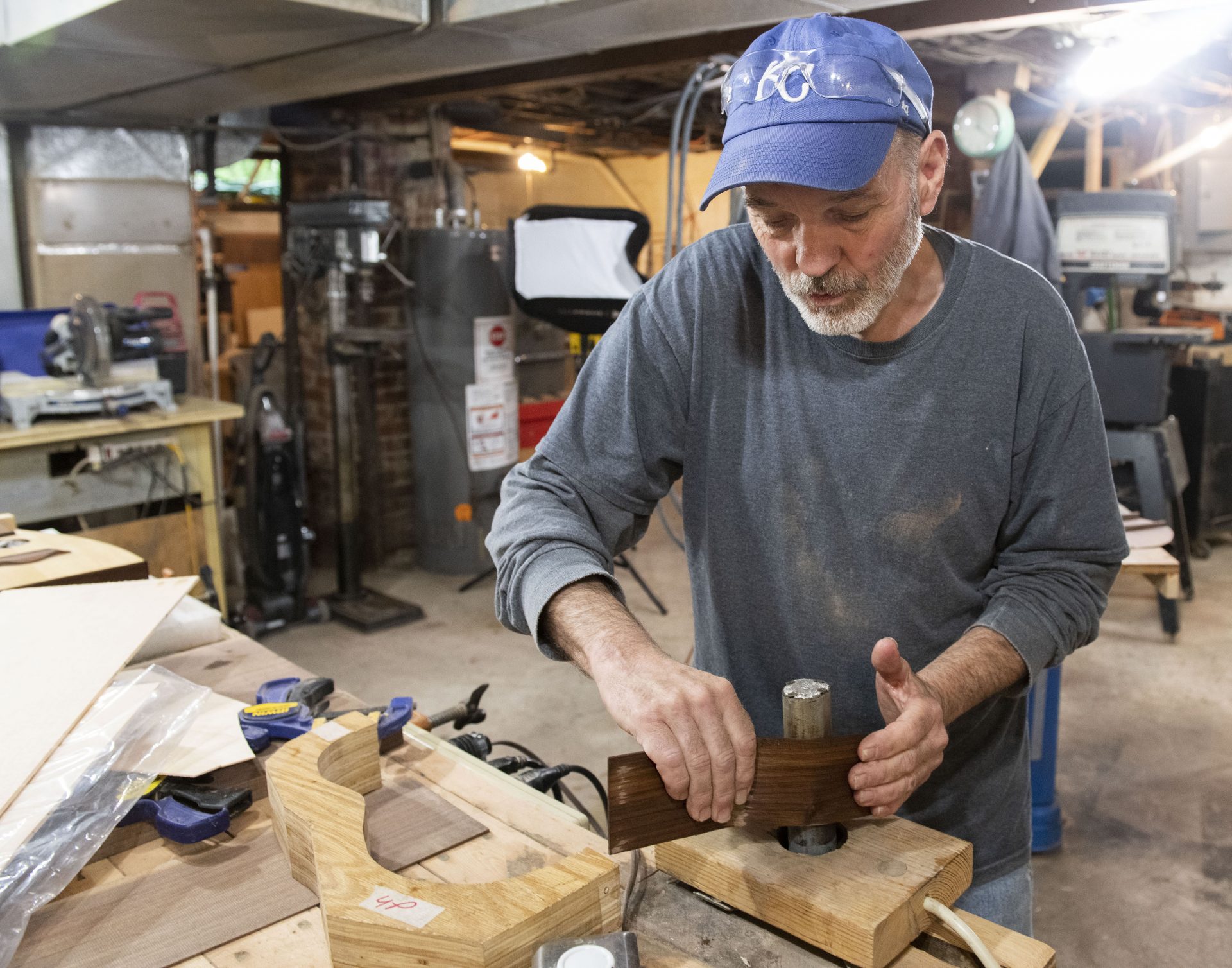 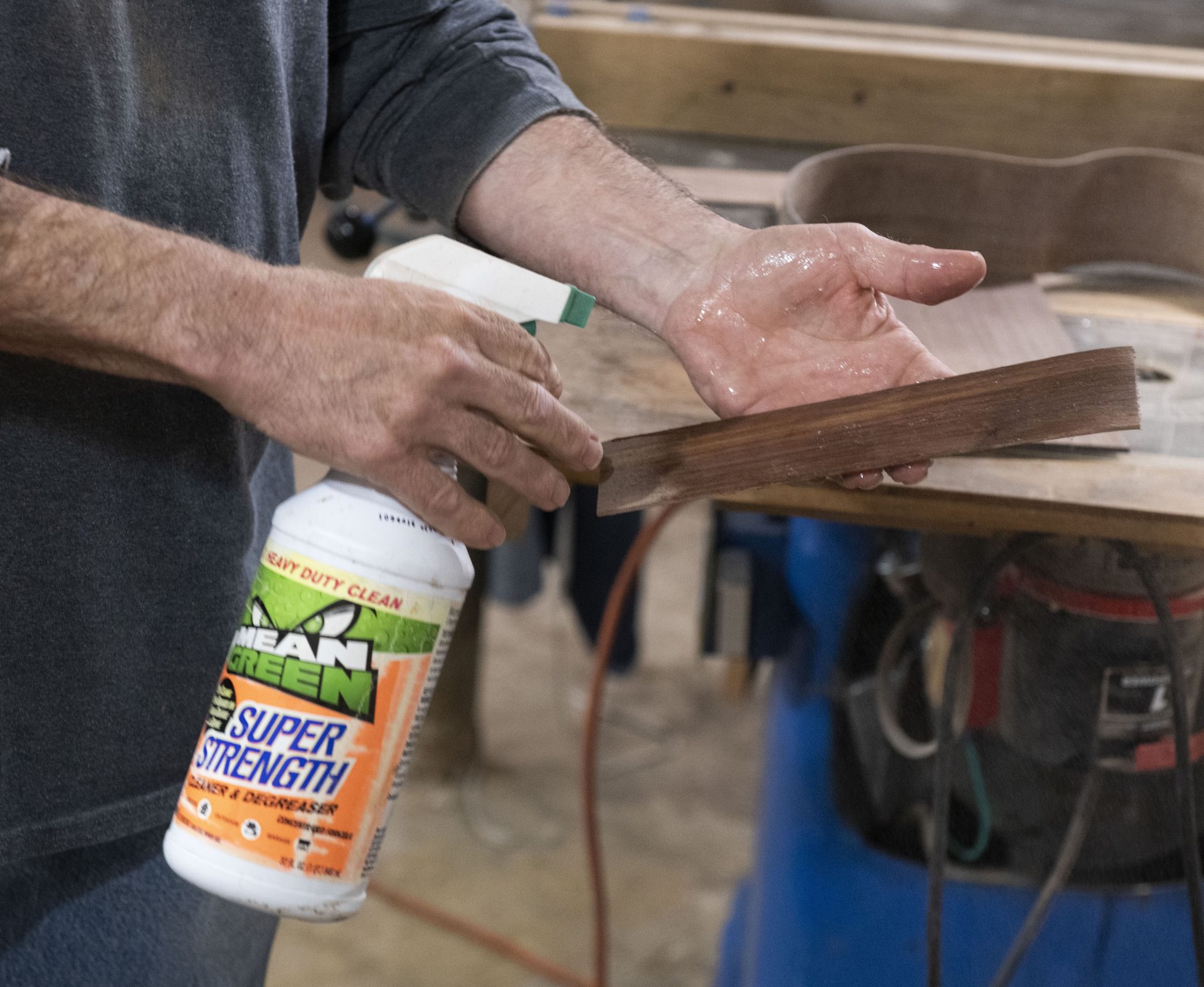 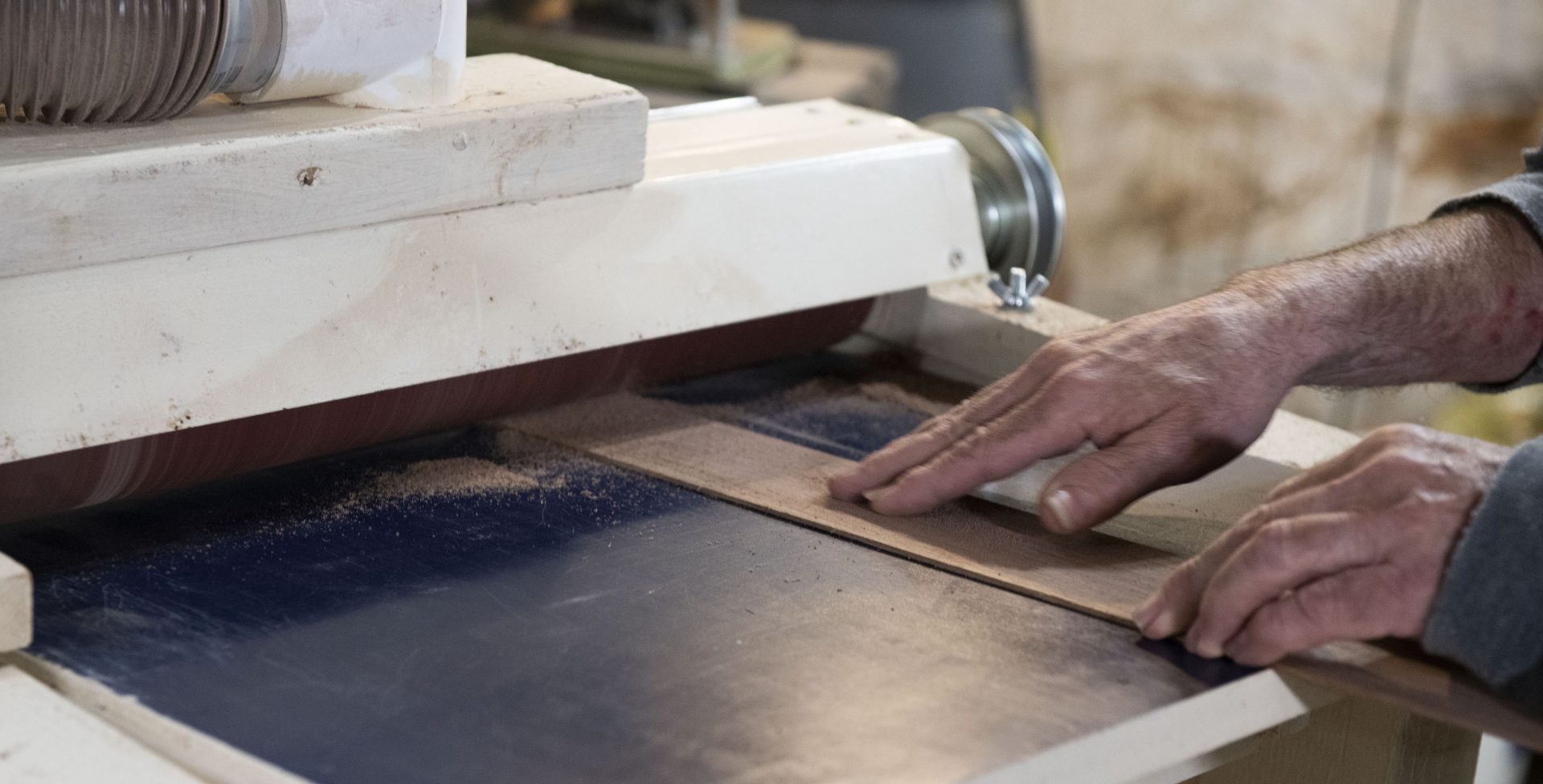 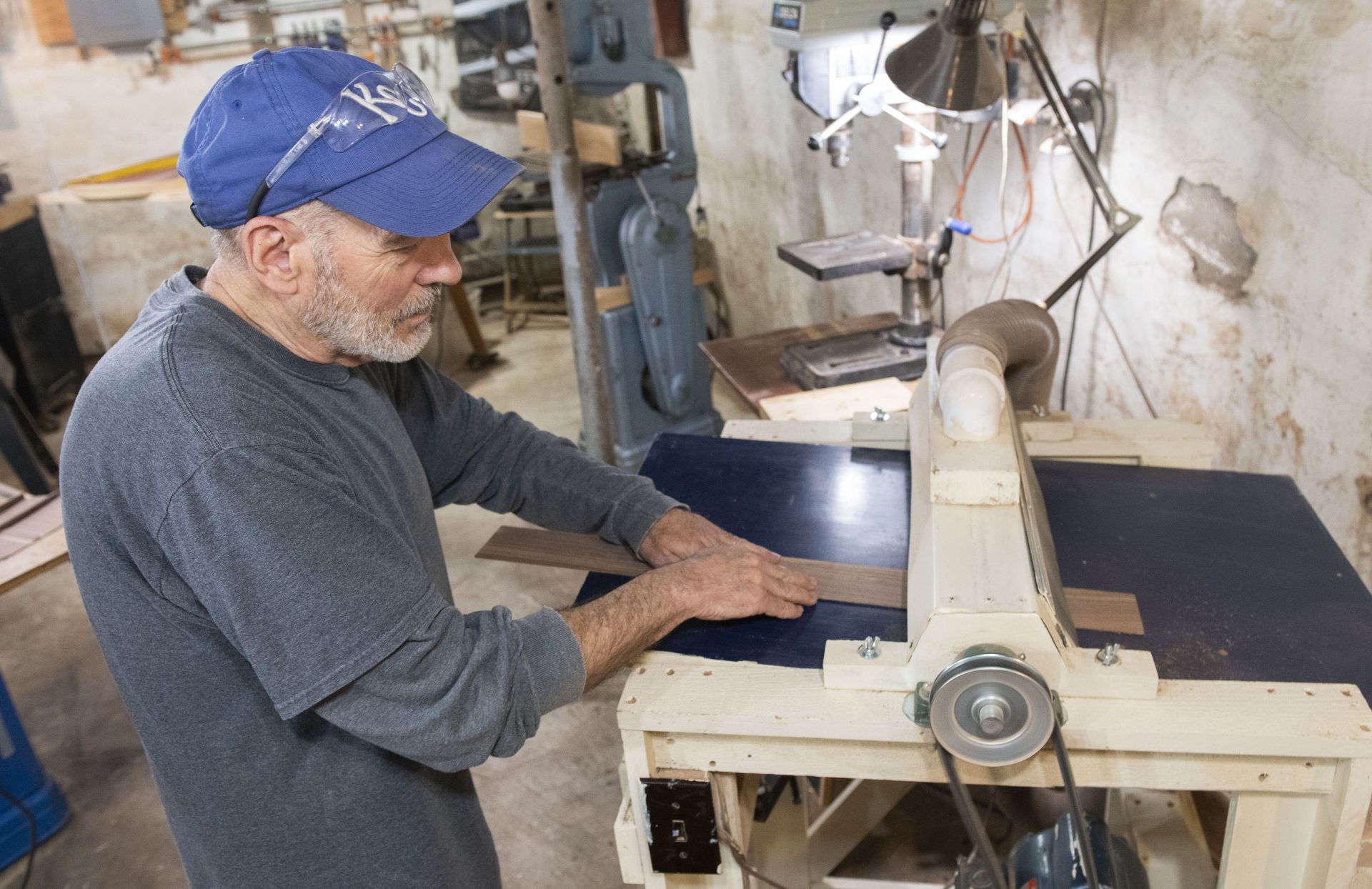 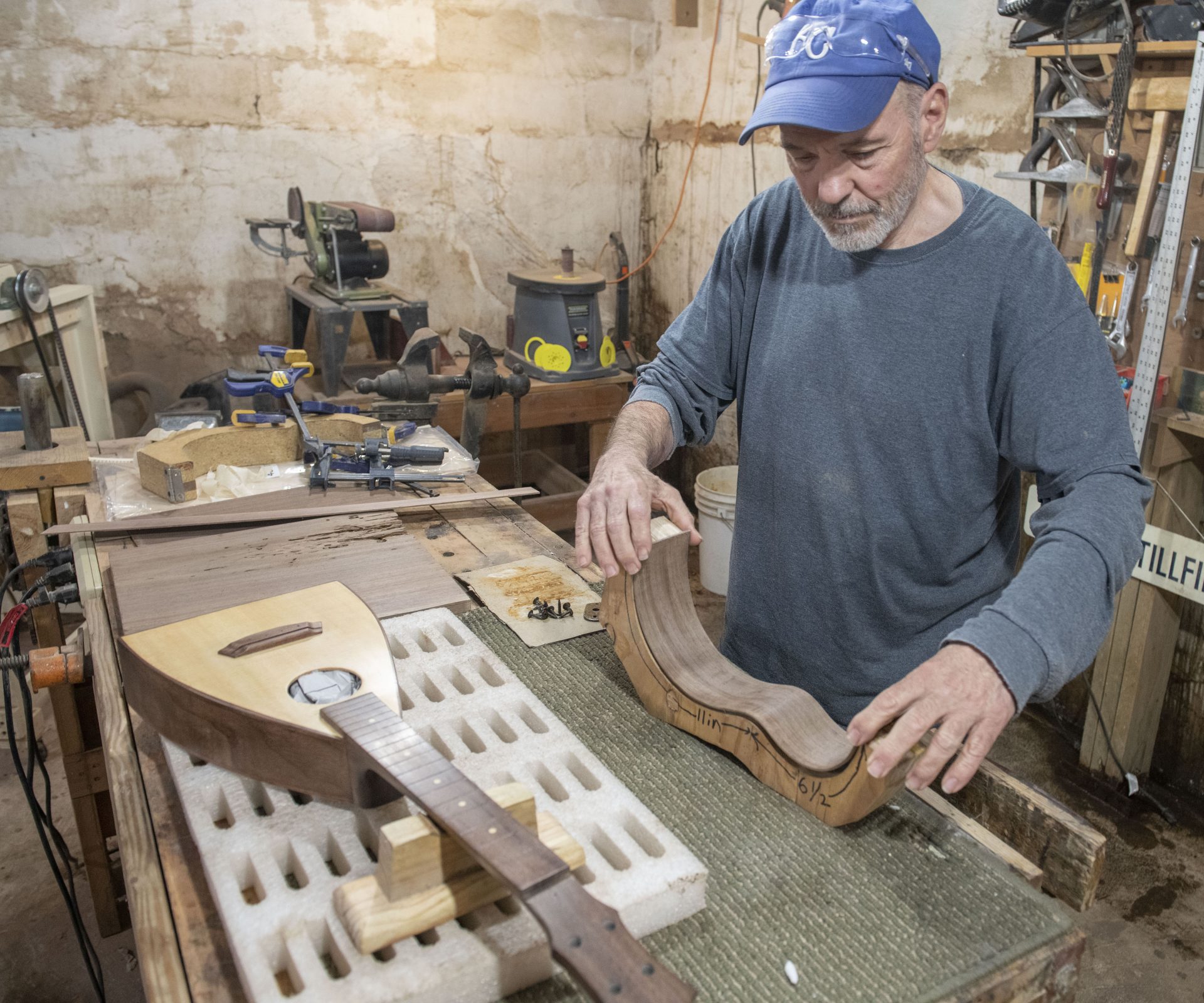 “I figured if I built that banjo I could build a bass,” he says. “Time went on and I built a few for friends and acquaintances. Then when my oldest grandson was turning 13 years old, he was interested in learning to play. So I built him an electric guitar. I’ve got five grandkids and they all got instruments for their 13th birthday.”

More than a decade ago he discovered cigar box guitars and thought the unconventional 3- and 4-string guitars would be fun to build. They were popular and a good seller at the time, so he gave it a try.

“For me it’s just a hobby, so it’s not like I got rich doing it,” he says. “I enjoy myself and it pays for itself.”

Kelly builds his guitars in his basement shop, which is chock-full of all the tools — purchased and handmade by Kelly — to do the job. He says he spends about two hours per day working in the shop. At that rate, they take about eight weeks to finish. Kelly works on one instrument at a time, until it comes time to finish the instrument  and it needs time to sit. He’s made more than 160 cigar box guitars and ukuleles.

Kelly mostly uses walnut for the sides of the instruments, as he can get it locally at Miller’s Rustic Sawmill in King City. All the knowledge he’s needed for the projects has come from his experience and YouTube. He posts pictures of his works in progress on social media, specifically his Instagram page.

“That’s so people know how complex this process is. It’s not like you just go in the basement and wham, bam there it is. It’s a lot of different disciplines. There’s basic woodworking, finishing and bending the wood on the heat, which explains the burns on my arms,” he says with a laugh. “If any of them are electric, then you’ve got the electrical end to it too.”

He has since switched his focus to making ukuleles and has made more than two dozen of them, including a few very unique pieces. Other than the Prince ukulele, he’s built a tiki-themed ukulele for a customer who lives on a houseboat. The client wanted a design wood burned into the instrument, so Kelly found someone in Cameron to do that. It included surfboard-shaped bases for the pickup covers with a Caribbean drink rhyme inscribed: “One of sour, two of sweet, three of strong, four of weak.”

Kelly’s passion for building might be most evident in the one big difference between him and his customers. Kelly can strum his guitars and ukes, but hasn’t mastered playing them. That first banjo might still be with him because of nostalgia or a lack of buyers. “I’m left-handed so I built it to be played by someone who’s left-handed,” he says. “I never learned to play. So that was a big mistake because almost nobody can play it now.”

He’s perfectly content with his artistic passion being the musical vessel. “Building and playing are both challenging, but they are completely different,” he says. “When I started I thought, ‘well it’s only got three strings. It’s easy.’ And it is easy for somebody that’s got the aptitude for it. But, I’ve just got more aptitude for building them than playing. And I enjoy it.”

Kelly’s obvious passion for his one-of-a-kind creations manifests itself whenever he doesn’t get his few hours per day in the basement.

“If for one reason or another I don’t get my shop time, I get antsy,” he says. “It’s like therapy for me. I get weird. It’s like I need to be down there. I’m happy making them.”