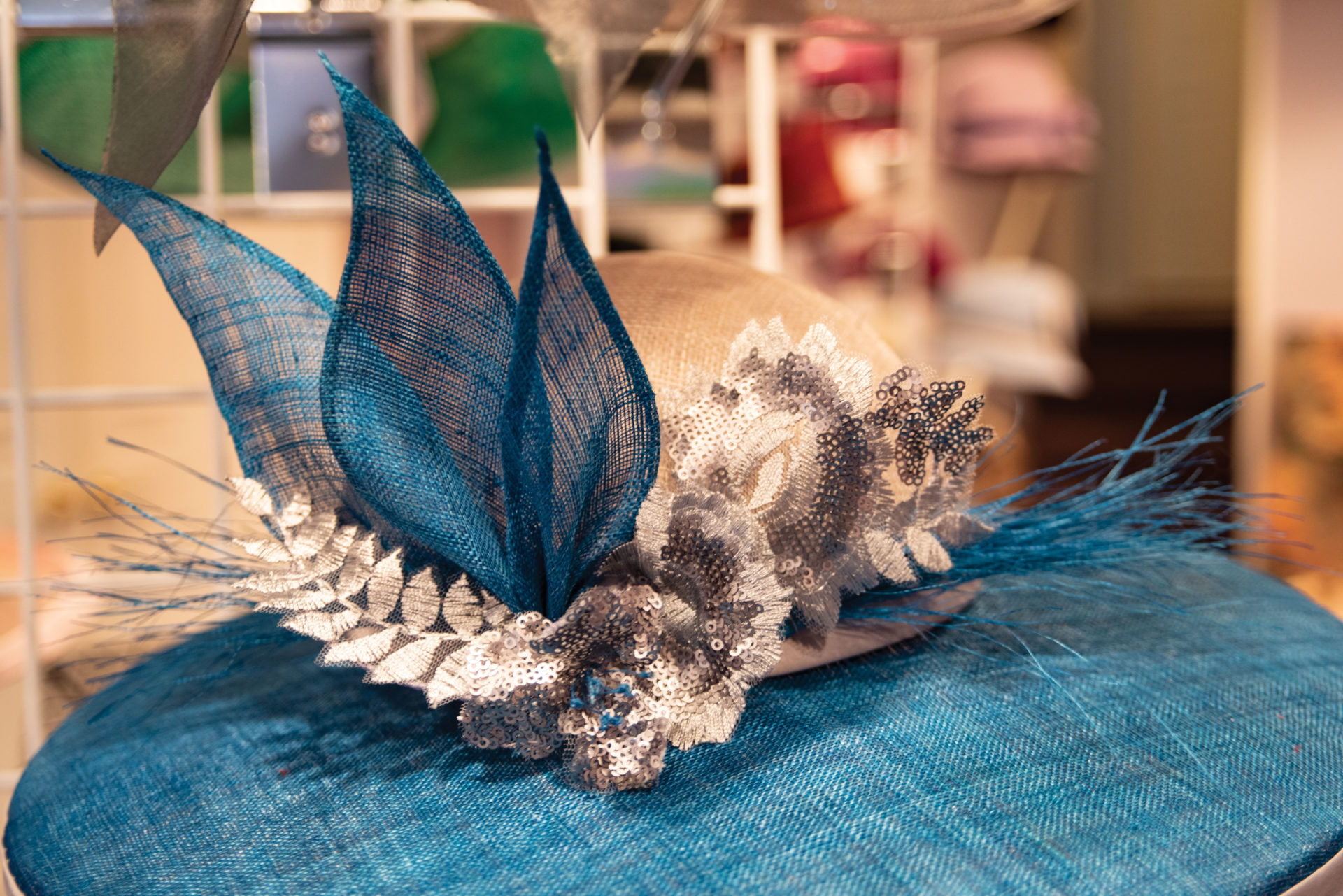 Dainty hands smooth the damp fabric over the domed wooden form. The seemingly unforgiving material finally begins to give after numerous tugs, relaxing around the shape. As it gives way to the designer, pins are strategically placed to set the brim. Once dry, the crown will become part of one of artisan Rose Monzyk’s unique hats.

“They’re all fun to create, but I’m naturally drawn to large-brim hats,” says the milliner. “And bows, netting, roses, feathers, I love it all.”

It’s that attention to detail which garnered Rose’s hat handiwork a highly sought-after spot in the Kentucky Derby Museum at Churchill Downs in years past. She’s been lucky enough to have four of her creations on display at the Louisville museum.

The Washington milliner is the queen of chapeaus. For more than 20 years, Rose has designed headwear for ladies all across the United States.

The designer is no stranger to creating items to wear. She began sewing at age 7 and kept right on stitching. Being on the petite side, Rose says she often had a difficult time finding clothes which fit her well, so she began sewing her own, including her business suits. When she couldn’t find hats to go with outfits, the seamstress began researching how to make her own and the rest is history. 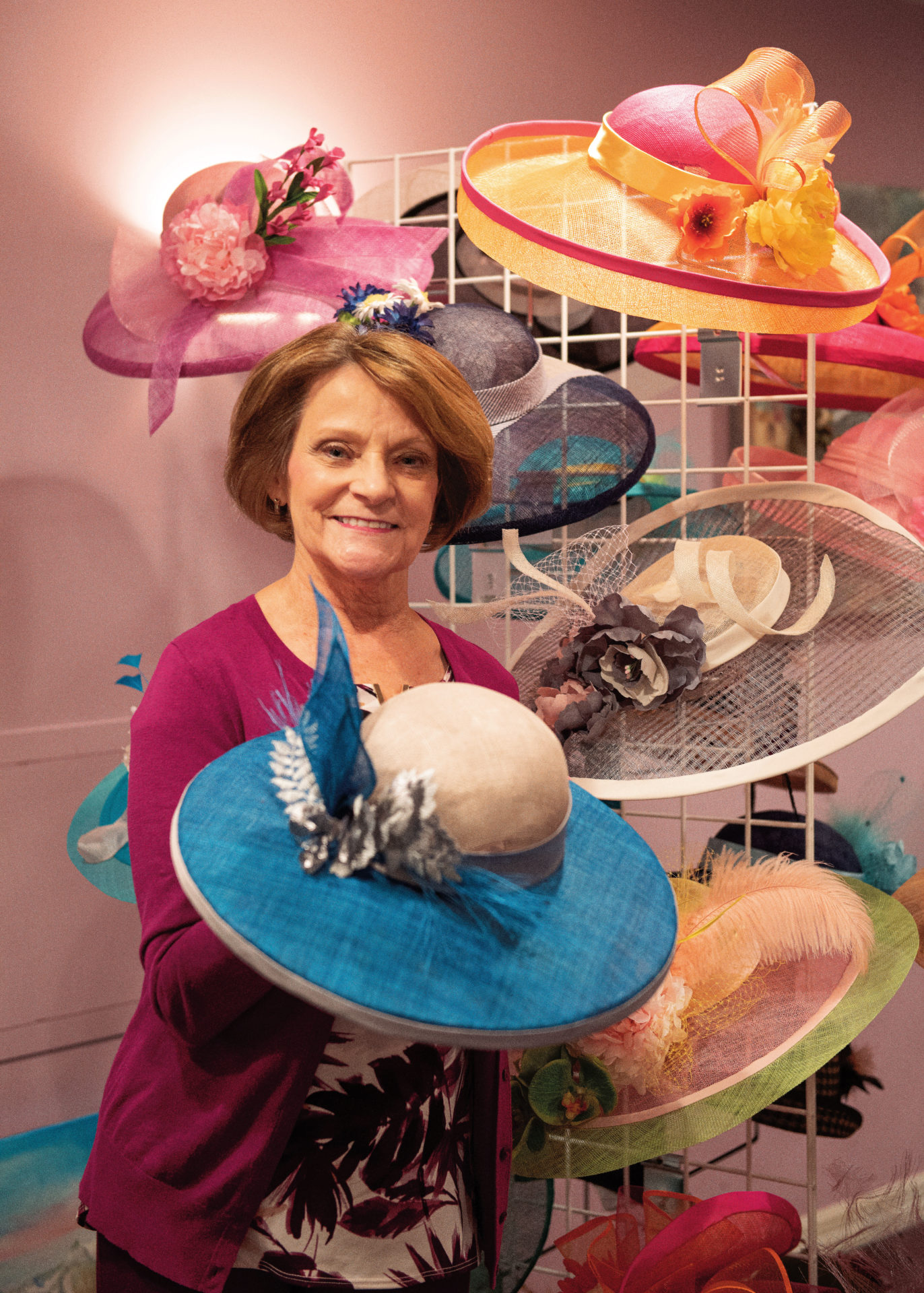 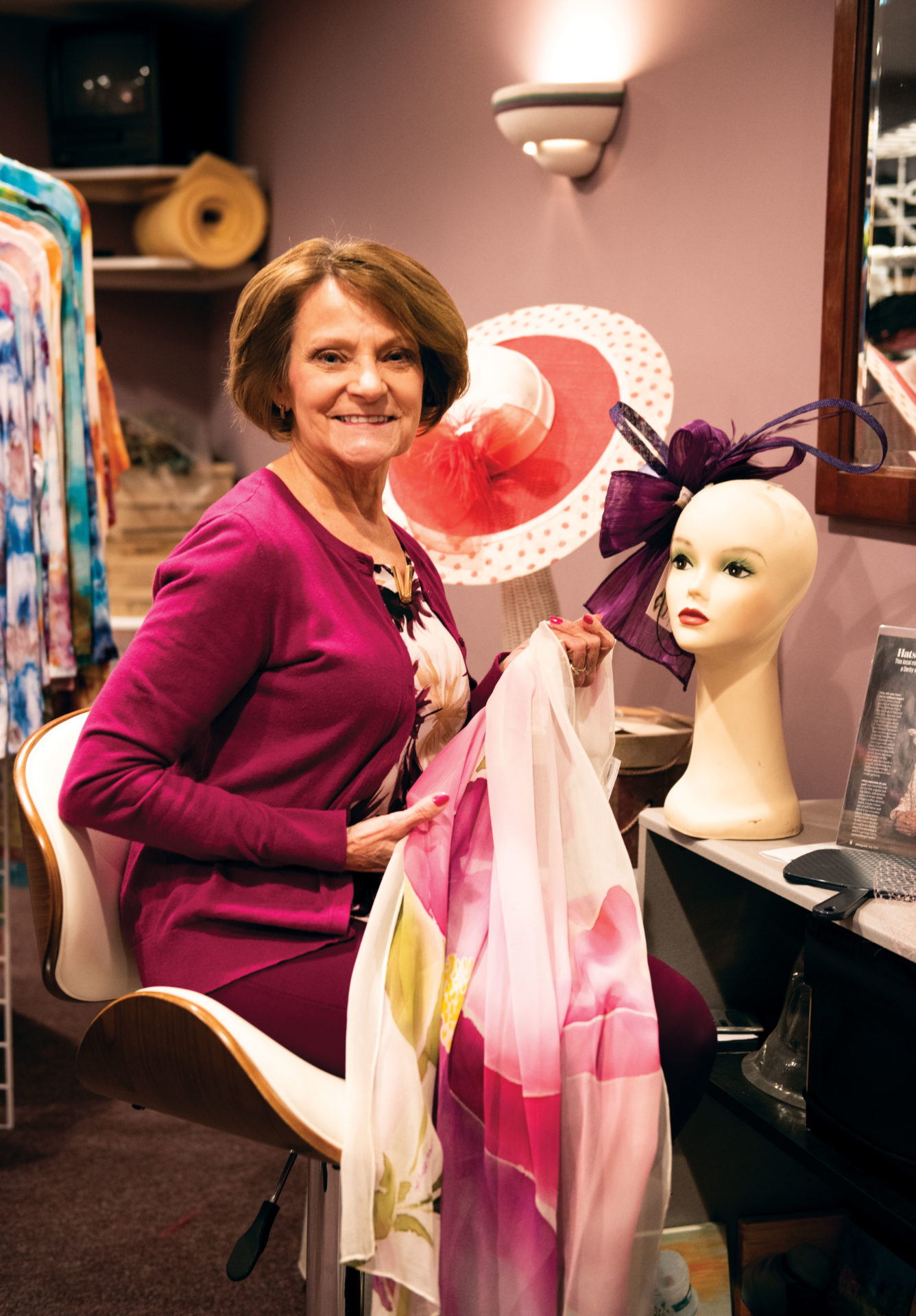 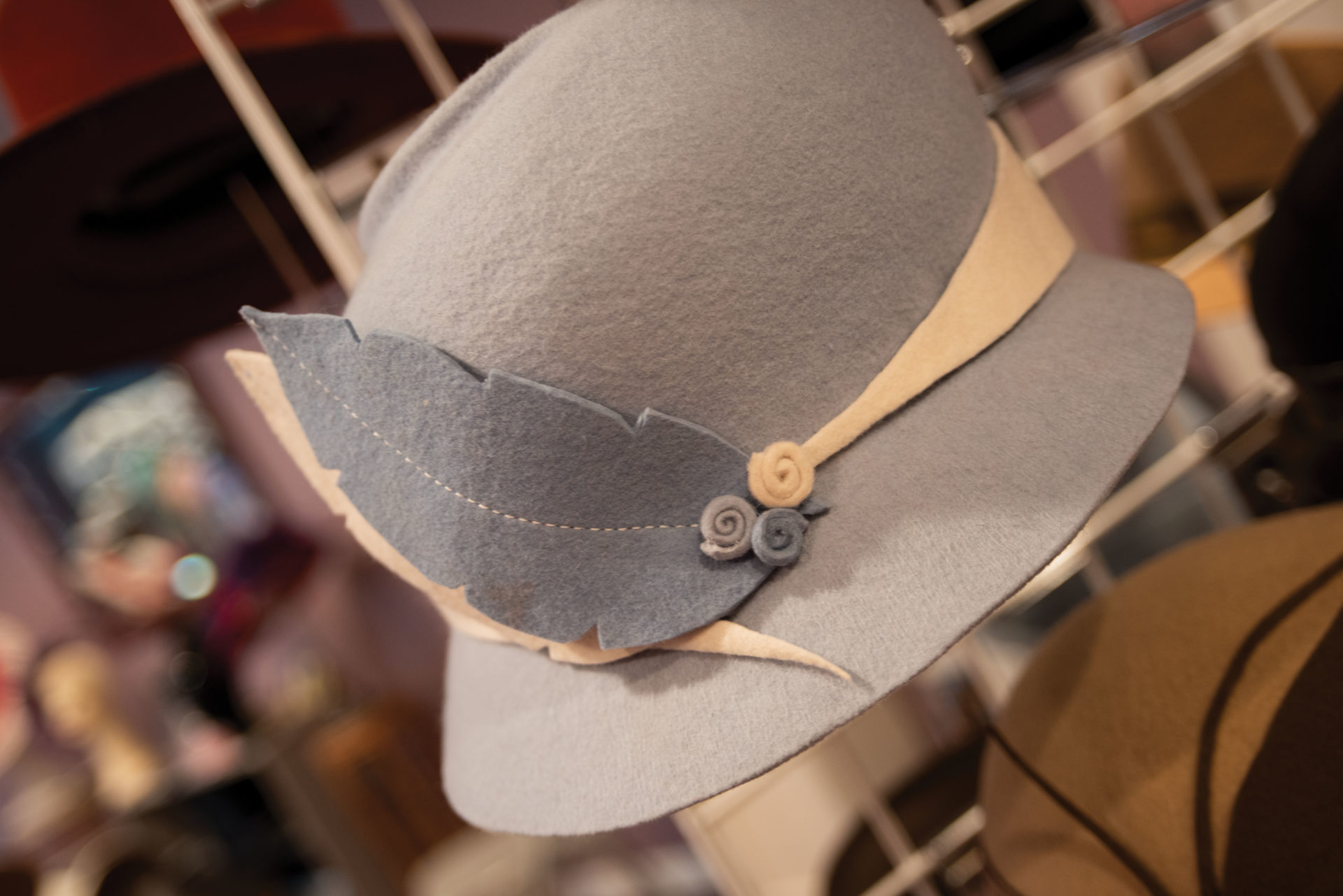 “I fell in love with the entire process, whether it’s choosing what fabrics the hat will be made from to fitting it over a form and watching it begin to take shape. Hats are like people — no two are ever exactly alike,” says the designer.

Like clothes, hats have seasons. Wool, felt or fur hats are considered as fall or winter wear, while a hat made from most fabrics, straw or sinamay (a fiber made from the stalks of the abaca plant in the Philippines) would be worn in spring or summer.

Rose runs her hand over the sinamay fibers which she pinned earlier. “This will be dry soon. Then I’ll take it and iron over the fibers, making the layers fuse together. At that point it’s ready to be sewn onto a brim.”

Most of the time the designer has hats in various stages, with crowns drying on forms, brims getting edge trim sashed on, garnishes being made and added. Hats take anywhere from six to 12 hours to complete. Everything is hand-stitched — not even glue is used to attach added detail.

“I’ve kept pretty good count through the years and I think I’m up to 1,600 hats,” Rose says, noting she always tries to take a photo of each hat when it’s completed.

Most of her work is sold online, but Silver Dollar City fans have seen Rose working on the handmade toppers for the past 16 years during fall craft festivals. She hopes this year will be no different.

“She has the uncanny ability to know which hat will highlight your features,” says Carol Lundy, a Reeds Spring resident who’s been buying Rose’s creations at Silver Dollar City for nearly a decade. “Her work is beautiful and reasonably priced.”

Carol says she has more than a dozen of the artist’s hats right now, with her collection including everything from broad brim Derby styles to close-fitting cloches and lightweight fascinators, a clip-on style which the royals made popular. When she’s not wearing them, Carol says they’re all on display in her home.

“The ladies enjoy the hats,” Carol says, “But when I’m out in public, it’s the men who come up and tell me how much they love my hats. I think they make such a statement.”

Before COVID-19 halted gatherings, Rose says she had been asked by Saks Fifth Avenue in Frontenac to do a trunk showing with her hats. Another popular store, Lilly Pulitzer, had Rose come in and place her hats in displays several times because they go so well with the styles and colors the store offers customers.

Rose’s work also has found its way into markets in states such as Georgia, where the Southern ladies love a beautifully made hat or fascinator. Most of the milliner’s creations start around $75 for fascinators and go up to $175 for wider-brimmed hats, depending on the detailing. While commissions are welcome, Rose prefers to create and let the hat find the owner.

“Faces are rarely symmetric. Some styles look better on some people than others,” says the designer. “It’s wonderful to see people love what you made. Then when you see them try on the perfect hat, it’s just a wonderful feeling. Their faces light up and you know the hat has a new owner.”

Before the world halted this past spring, Rose had begun offering small classes on hat making. She’s hoping as things open back up, she’ll be able to begin hosting those again. One highlight of her millinery work was competing in the Top Hat Contest in Lexington, something similar to TV’s “Project Runway.”

“You had to pay to enter, then maybe you’d get chosen. Only six milliners were asked to compete and I was lucky enough to be one of them,” says the artist.

Competitors were put in a big room at separate tables. Other than their own needles, thread and scissors, milliners could only use supplies offered to them to create a hat worthy of the win.

The colors she was assigned — apple green and pink — made the designer think of roses in a garden, so away she went, snipping and sewing. Six hours later, Rose had a completed hat, ready for her model to wear during the runway show. She came away with the first-place win, receiving hundreds of dollars of supplies, a trophy and a model wearing Rose’s award-winning hat on the Kentucky Derby fashion calendar.

If you ask Rose where she hopes her millinery work will take her next, she knows the answer immediately.

“There’s a two-week class held in a castle in France which I would love to attend,” she says. “Maybe one day.”

Until then, the stylish artisan keeps creating beautiful works of wearable art for ladies to wear and gentlemen to behold.

You may contact Rose Monzyk by emailing rose.monzyk@gmail.com or call 636-239-5423. See more of her work at www.rosemonzyk.com or follow her on Facebook at Rose Monzyk Millinery and Brushworks.