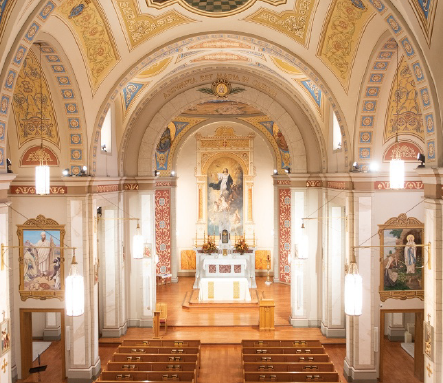 hen the priests, brothers and staff at the Association of the Miraculous Medal in Perryville set out to create a new plan for the core campus, they faced a real challenge. The beautiful Vincentian St. Mary’s of the Barrens Church, which houses a much visited national shrine, needed major renovation. But the work would have to be done in keeping with part of the mission statement, which calls for “preserving, protecting and honoring” the heritage of the church and its grounds.

“The biggest renovation was the church, and the church had a few issues,” says Don Fulford, CEO of the association. “It was leaking a little bit. We had termites. Our electric usage was unbelievable.”

Driving the high electric bills was the lighting used to illuminate the interior and the many works of art hanging on its walls. “We had 16 500-watt bulbs that did nothing but shine on the altars and the paintings brought over from Europe,” Don says.

Not only were the lights using too much electricity, they also left much of the sanctuary in shadow. Don says he noticed those attending Mass clustered in certain spots. “When the hymnal was open and they were following along, the only places they could see were in these bright spots in the church.”

Fortunately, the shrine is served by Citizens Electric Corp., which not only wanted to help but  also had a rebate program in place that was tailor-made for the project. Power Moves is a program provided by Wabash Valley Power Alliance, which supplies wholesale power for Citizens and cooperatives in Indiana and Illinois.

“It’s about saving the members money and providing them with the best energy value,” says Steve Elsea, manager of member services for Citizens. “We don’t want our members wasting energy. Power Moves provides more energy value to the member, and the energy savings on the wholesale side are passed on to our members through stable rates.”

Citizens helped the shrine fill out the application. But when it was sent in, the request was rejected because it didn’t meet one of the key requirements of the program. “Wabash Valley has certain program parameters, one of which is that the payback on the energy efficiency measure has to be less than seven years,” Steve says. “When we calculated the payback, it was like 19 years. Power Moves said, ‘sorry, we can’t give them a rebate.’ ”

Undaunted, Citizens went to bat for the shrine, which brings tens of thousands of visitors into Perryville each year. The problem was that the new lights planned for the historic structure had to be custom made to match the ones being replaced.

“This is a national shrine and a destination for tourists,” Steve says. “My point is if it had been a regular church that needed to do a lighting retrofit you can go to a catalog and say, ‘OK, I’m going to order these off-the-shelf lights.’ The shrine needed to maintain the integrity of the place, which blew out the cost. So, we asked Wabash to re-run the numbers based on standard lighting costs. Well, they did, and we were able to give them the rebate.”

Altogether, the association received $18,364 in Power Moves rebates, which cut its energy use by 135,953 kilowatt-hours per year. It ended up with brighter lights, lower electric bills and less maintenance from the LED lights.

“What the upgrades meant to us was that we could make the place brighter for all of our wonderful visitors and guests,” Don says. “We could illuminate more of the beautiful artwork that was here, and we can do it at a much cheaper cost.”

The extensive renovations were completed in 2018 and visitors have been commenting on how much they like the improvements. Don says the most touching comment to him came from a second grader who on a visit to the church stared in awe at the decorated ceiling and stained-glass windows. The child commented that it was the most beautiful church he had ever seen.

“I know that the new lighting system had a lot to do with it because he can now see the beautiful murals, he can see the artwork,” Don says. “And it was because of our partnership with our co-op.”

The church and surrounding campus got its start in 1818, three years before Missouri became a state. It originally included a seminary that was the first seat of higher education west of the Mississippi River.

The seminary closed in 1985 and its buildings were converted into a retirement home for Vincentian priests and brothers.

The present church dates back to 1827 when the cornerstone was laid. It replaced a log structure that has been restored and is still on the campus. There are eight altars located in various chapels inside the church. These gave each of the 200 or so seminarians an opportunity to say Mass during their training at the campus.

One of the chapels is the Miraculous Medal Chapel added in 1929. An adjacent door leads into the Votive Light Room, where thousands of LED candles recall the requests for prayers that come into the shrine from the faithful around the world.

During the recent renovation, the first in 40 years, a rosary walk was added to the shady campus. This leads to the grotto built on the site of the quarry that provided stone for the church. It was built during World War I and will celebrate its 100th anniversary in 2020.

“We have a beautiful statue down in the grotto,” Don says. “As a yearly routine they would send a student up on an old ladder with a bucket of white paint. There was probably 60 layers of paint on it. When we stripped it down they found it was painted many colors, not just white. So we redid it to its original colors.”

The area always has been a place where people can come to find peace, Don says. “It’s just one of those special places. We have people from all faiths who come out here and just recognize that their minds need a quiet space to reflect. We are not a park, we are not a picnic area. We are just a reflective space where one person can be at peace with themselves.”

That’s especially true now that the Missouri National Veterans Memorial with its exact replica of the Vietnam Wall has opened on the north end of Perryville. “It makes for a special day when someone visits both the Wall and the shrine,” says Don.  “The reflective and prayerful space here complements the emotional and inspirational site of the Wall. It is truly a synergy this community can be proud of.”