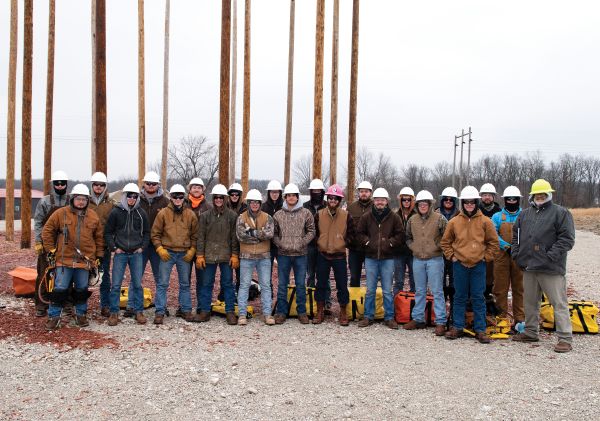 Ozarks Tech trains the next generation of linemen

Bitter cold temperatures and a biting wind make conditions miserable, but a group of 23 Ozarks Technical Community College students gather undaunted outside the college’s Lebanon campus. They pull tools from bright yellow and orange bags, strap spikes to their boots and don hardhats. Then with a skill that defi es their relative inexperience, they scamper up the circle of tall poles and go to work under the watchful eyes of instructor Mitch Hurt.

A former lineman for Consolidated Electric Cooperative and a basketball coach for several Missouri schools, Mitch knows how to coax the best out of the future linemen. Most had never touched a pole when they started the program.

“Line work, that’s my passion,” Mitch says. “I always wanted to teach in a school. Some of the guys call me coach. That doesn’t bother me a bit because that’s what I do.” 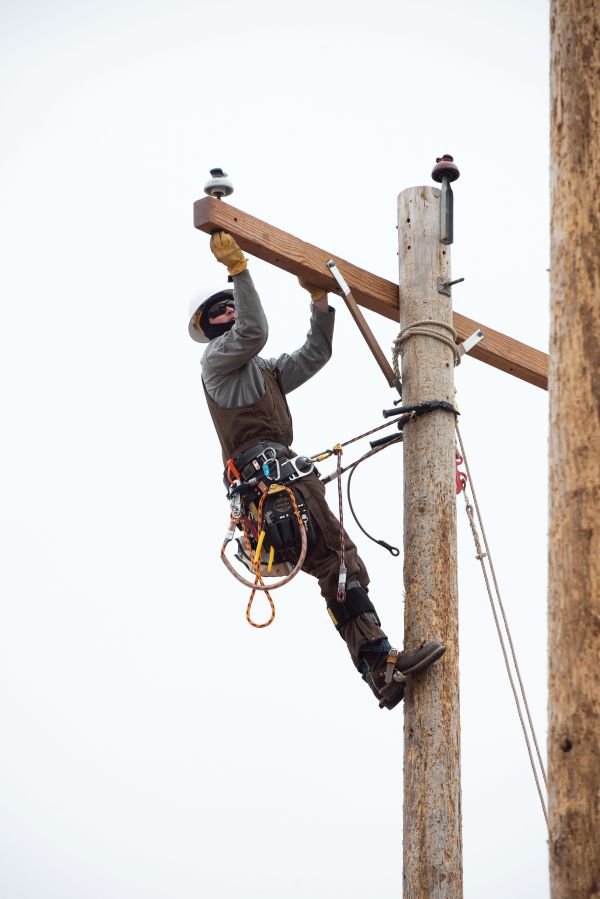 Derrick Crosser braves the heights while framing a 45-foot pole.

He’s pleased with the progress the students have made in a short time. Midway through their second semester, his students already know enough to be of value to employers. But the education Ozarks Tech has in mind for them is far from complete.

Graduates of the Electrical Distribution Systems program will earn an associate degree in applied science. Along with their lineworking skills, they will get a broad education including math, English, civics and public speaking, skills that will help them advance in their careers. They also will leave with a commercial driver’s license, along with experience behind the controls of trucks used for line work.

Mitch admits he had little training when he started as a lineman with a contractor in Tipton. “It was all on-the-job training,” he says. “I was gloving 7,200 volts 11 months after I was hired and I shouldn’t have been.”

Mitch and his father, a lineman for Co-Mo Electric Cooperative, often talked about the need for a lineman training program in Missouri. “We thought there should be a school to teach linemen basic skills: climbing and rigging and stringing lines, change out poles, put a meter loop on, frame poles, all that stuff. This was back in the ’80s.” 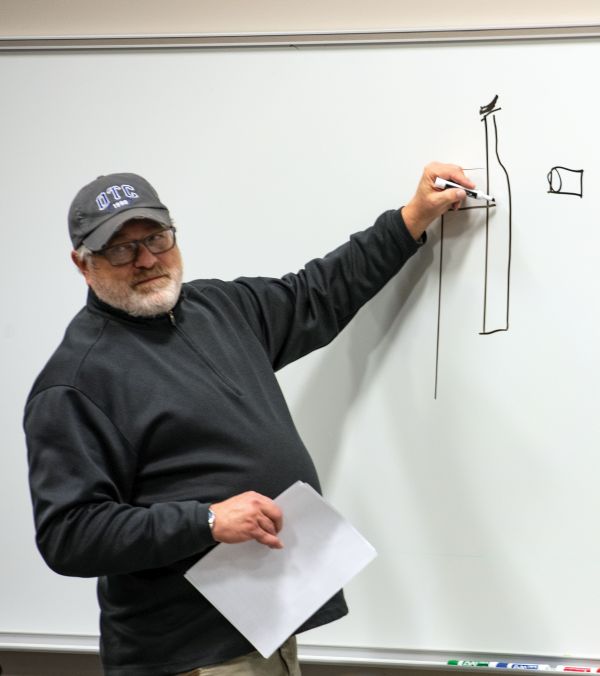 Armed with a degree in social sciences he earned after suffering a career-ending injury as a lineman, Mitch was the logical choice for the instructor of the new program.

“I fi gured in the fi rst week or two we would have someone come to me and say, ‘I’m scared of heights,’ ” says Keith Dinwiddie, director of the program. “I was watching them on the poles the fi rst couple of weeks.

A lot of them were doing it like I would. There were holes from their gaffs and holes from their fi ngers around the back of the pole. But no one complained. Mitch is doing a phenomenal job with them.”

Rare for a program that teaches newcomers to climb poles, no one has left the program from fear of heights. “I don’t push them to go to the top, never ever,” Mitch says. “They push themselves. When they see their buddies going to the top, they are going to want to go to the top.” 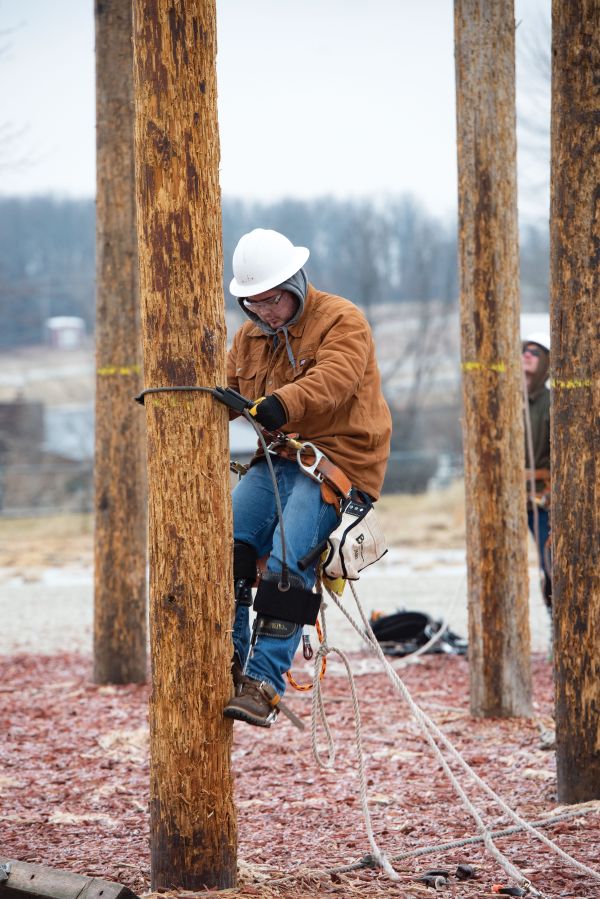 Justin Hillhouse starts his way up a pole in the climbing lab.

Ozarks Tech launched the lineman program, the second in Missouri, after being approached by electrical utilities that saw a need for new lineworkers to replace those who are about to retire. “We dug into it and the next 3 to 5 years we are looking at about 6,000 openings in Missouri and surrounding states,” Keith says.

That includes Missouri’s electric cooperatives, which enthusiastically supported the program through donations of tools, surplus materials and trucks that no longer fi t their needs. Laclede Electric Cooperative, with headquarters across Interstate 44 from the campus, donated poles for a climbing circle and set them prior to the start of class in August 2018. Donations also have come in from Consolidated Electric, Southwest Electric, Co-Mo Electric, ShoMe Power and the Association of Missouri Electric Cooperatives, with more to come.

In addition, linemen from electric cooperatives have stopped by the school to offer real-world advice from their careers. These have included Mitch’s son, Tory, a lineman at Southwest Electric Cooperative.

The program is not for the fainthearted. Besides working outdoors in all kinds of weather, successful students will have to overcome their fear of heights. “It’s something you’ve got to get used to,” says student Dylan Dampier of Lebanon. “It’s not natural to stand on your arches 45 feet up a pole. But every class we have with Mitch we go out and climb. We are in class eight hours a day. We are climbing probably four. You get used to it pretty quick.” 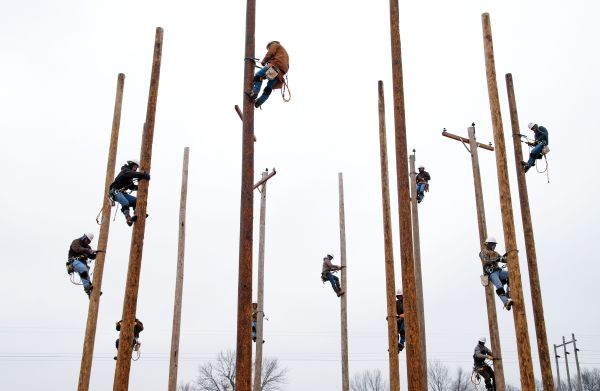 Gaining confi dence on the poles began the fi rst week of the class. Students practice climbing during every class, in all kinds of weather and even at night.

He says the ice storm of 2007 inspired him to become a lineman. “I went out and watched the guys work on the line in front of my house,” he recalls. “After graduation I wanted to stay somewhere close. I went with an engineering degree fi rst. Once this opened I changed my mind immediately.”

Hunter Rost, a student from Marshfi eld, brought deep roots in the electric cooperative program to the class. His great-grandfather, Hugh Bennett, was the first manager of Webster Electric Cooperative.

He says working in the cold is tougher for him than being so far off the ground. “Mitch is a one-ofa-kind instructor,” he says. “He knows how to teach, to get out there and instruct you because he was a lineman and a teacher. So it’s the best of both worlds.”

Justin Hillhouse from Competition signed up for the class thanks to the stories told by a family member who is a lineman. “He talks about it, says how much he loves it and that he gets to travel. I love all of that. He said I should give it a try and I have. I absolutely love it.”

Among the many lessons Justin has learned from the course comes mastery of fear. “I’ve learned to push that out of my mind and focus on what’s at hand,” he says. “You know you are not going to fall, but that thought is still in your head. I guess you would call it experience. It’s coming more naturally than it was the fi rst semester.”

All three students say they would have pursued other careers if Ozarks Tech hadn’t launched the lineman training program so close to their homes.

It’s not cheap, especially in the fi rst semester when the cost of tools and the CDL class add up to just under $10,000. But after that the program costs the same as other Ozarks Tech courses and fi nancial aid helps. Most of the students will leave with little or no debt and the potential for excellent pay and benefi ts.

Besides the outdoor work — which will include building mock power lines and then tearing them down — the students spend time in the classroom learning the why behind power line work.

Along with electrical theory, Mitch instills in his students life lessons he’s learned along the way. “You have to be employable,” Mitch tells them. “You keep your mouth shut and do it. If they say hang it upside down, you hang it upside down. If you learn nothing else from me, learn how to take instructions. Or they will eat your lunch.” The students are working to line up internships for the summer. From this and feedback he has already received, Mitch will tweak the training to ensure these future lineworkers are well prepared for their careers.

“I can’t wait to see how they do,” Mitch says. “The future looks really good here. I’ve got a ton of support, I work for great people and it’s a good situation all the way around. Give me the kids that are ambitious, give me the kids with the passion. I’ll take care of the rest of it.”

For more information on the program, call Mitch at 417-447-6635 or visit https://academics.otc.edu/ electrical-distribution