September is National Honey Month and what better way to celebrate than to stir some of the naturally sweet elixir into your favorite recipes?
If you’re using honey as a replacement for granulated sugar, use half the amount called for in the recipe. If baking, reduce the liquid in the recipe by 1/4 cup for each cup of honey used and reduce the oven temperature 25 degrees to prevent over-browning.

For more delicious recipes, check out the National Honey Association at www.honey.com. 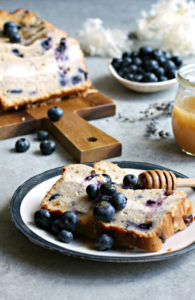 Heat the oven to 350 degrees.
Add the eggs, honey and sugar to a large bowl and cream together using a hand or stand mixer. Beat in the butter, vanilla, Greek yogurt and lemon zest.

In a separate bowl, sift together the flour, baking powder and salt. Stir the dry ingredients into the wet. Toss the blueberries with a teaspoon of flour and stir into the batter. In another bowl, blend the cream cheese, honey, sugar and salt until thoroughly combined.

Pour half the blueberry batter into a greased loaf pan. Spoon on the cream cheese mixture, top with the remaining blueberry batter and gently swirl with a butter knife. Bake for 50 to 60 minutes or until a toothpick inserted comes out clean. 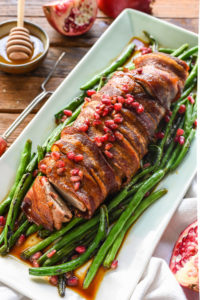 Reduce heat to medium and continue to cook, stirring occasionally, until the mixture is reduced by half, about 7 to 10 minutes. Remove from heat and allow the glaze to cool and thicken while you prepare the remaining ingredients.

Generously sprinkle the pork tenderloin with salt and pepper. In a large ovenproof skillet, heat the oil over medium heat. Place the pork in the skillet and brown on all sides. Remove to a cutting board. Use the 2 tablespoons pomegranate juice to deglaze the pan, scraping up any brown bits on the bottom, then remove the pan from heat.

Wrap the bacon slices around the pork, overlapping them so the ends stay secure. Place the pork tenderloin back in the skillet. Pour the glaze over the pork, using a brush to make sure it’s thoroughly covered. Place the pork in the oven and roast uncovered, scooping up the juices from the pan and brushing the pork every 10 minutes or so. Roast for 25 to 30 minutes or until a thermometer reads 145 degrees.

Remove the pork from the oven and glaze again. Allow to rest for 5 minutes then glaze a final time, sprinkle with pomegranate seeds and serve. 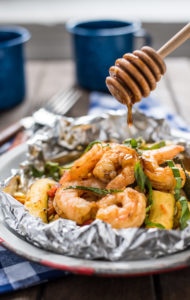 Heat gas grill to 400 degrees or medium-high heat. Tear off four sheets of foil about 10 inches across; set aside.

In a small bowl, whisk together the honey, garlic, vinegar, soy sauce, olive oil and red pepper flakes. Season to taste with salt and pepper.

Place 1/2 cup of the rice in the center of each piece of foil. Divide the zucchini, corn and tomatoes evenly between the packets. Top each packet with shrimp. Sprinkle everything with salt and pepper again.

Drizzle the honey glaze evenly over each packet. Bring the edges of the foil up over the vegetables and shrimp and fold over to create a seal. Prick foil with a fork several times to allow steam to escape.

Place foil packets on the grill and cook for 12 to 15 minutes or until shrimp is pink and vegetables are tender. Serve the packets straight from the foil or in bowls, topped with fresh basil. 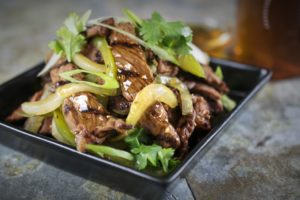 In a large bowl combine all ingredients, except beef, and whisk to make sure everything is well combined. Add the beef to the marinade and refrigerate for at least 1 hour before cooking.

When ready to prepare, remove the beef from the marinade. Over a hot grill or well-oiled saute pan, cook the beef until the outside is caramelized. Combine with other ingredients and serve while hot.