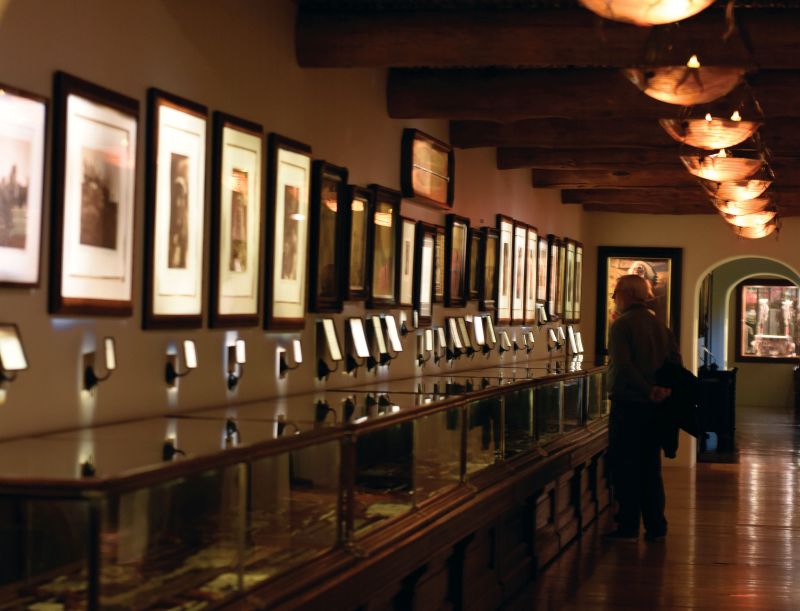 It sat atop the freshly plowed Ozark fi eld. A spring rain brought history to the surface where it lay, waiting to be found. A 16-year-old Johnny Morris was fl oating the White River with his father and uncle. Hurrying back to the truck, the young man cut across the fi eld and something caught his eye — an arrowhead.

Captivated by the fi nd, the young man turned it over in his hands, stopping to think about his fi nd. What had life been like for the man who made this? What was the hunting and fi shing like back then? Did he wear a buffalo hide or a tanned loincloth? How long had it been since someone had touched the point?

Through the years, Johnny’s interest grew in researching tribes that would have lived in the area, such as the Osage. As his desire to know more about the Native Americans grew, so did his personal collection of artifacts. In 2014 another link was added to Johnny’s story. Amazingly, most people outside the Ridgedale area haven’t experienced the Ancient Ozarks Natural History Museum which is housed beneath Top of the Rock.

“That arrowhead he found began a lifelong interest in Native American culture for Johnny,” says Molly Bolt, curator for the museum. “He collected pieces all these years and the museum is the culmination of his collection.

“We have more than 75,000 artifacts — and they’re authentic,” Molly says, noting the 35,000-square-foot museum has expanded four times since opening. “With the exception of a few pieces on loan to us, all of the collection displayed belongs to Johnny.”

According to Jeff Wilhoit, part of the marketing team for Big Cedar Lodge, says many guests have told them the museum is bigger and better than the Smithsonian’s.

“Celebrities Kevin Costner and Val Kilmer say it’s one of the best collections they’ve ever seen,’ ” recalls Jeff, who has worked closely with Johnny since 2000. “It’s currently the largest collection of its kind in the country.”

Johnny’s respect for nature and the rich history of the Ozarks is something visitors see in every project he approaches. This amazing
museum is no exception. With a great deal of Native American items included in the museum, Johnny wanted to be assured the tribes were OK with what he’d done.

“He had the American Tribal Council come to give their blessing before the museum ever opened. They loved it,” Jeff says, pointing to a group photo on the wall. “Johnny respects that the Native Americans were our very fi rst conservationists. They didn’t let anything go to waste, they used everything.”

From the onset, visitors can read the founder’s impassioned narrative about his love of nature, respect for those who’ve lived here before us and why this collection matters so much.

There’s much more than Native American culture on display. Museum goers are immediately awed by dioramas displaying lifelike prehistoric creatures such as the giant Jefferson Ground Sloth, the terrifying Hell Pig and colossal Terror Bird that would have roamed here long ago. 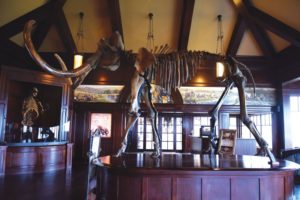 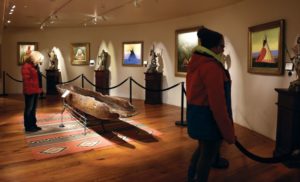 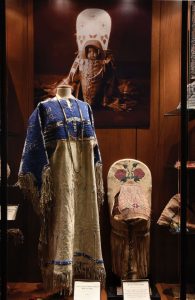 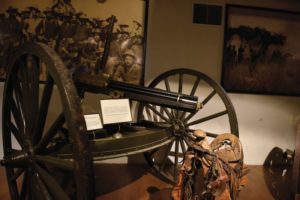 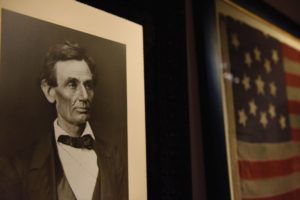 Hallways are lined with beautiful glass cases displaying artifacts, such as 120 unique axe heads — only a small part of the 8,500 in Johnny’s collection. Room by room, history unfolds to the visitor’s level of interest.

“We’ve had people zip through and stop when something catches their eye,” says Molly. “Then we’ve had people say they’ve spent four hours just in one area. Everyone’s different.”

To enhance each visitor’s experience, the museum is about to release a free app which can be used while walking through and later, at home, if they want to recall something they saw during the visit.

The pottery room showcases what Molly refers to as “the ancient of ancient” pottery. The earthenware star of this segment is the Hopewell Tradition Pot found in the Mississippi River, dating as far back as 500 A.D. Other clay items of interest are the unique head pots on display.

“Only 138 have been found and all those were in the Bootheel,” Molly says. Peaceful notes of a pan fl ute and quiet sounds of nature journey along with museum goers as they work their way through the displays, many of which are housed beneath the Top of the Rock restaurants. Muted lighting also adds to the ambience of the collections.

One item, a buffalo robe, is splayed across a wall showcasing the pictographic art drawn to record events of importance.

“The Plains tribes did this as a means to share signifi cant events from their life. Marriages, deaths, battles, hunts — they drew it here as a record,” says Jeff. “It was the Facebook of their time.”

Another astounding exhibit in the museum involves beautifully captured photographs of the tribes.

Molly says Johnny has more than 400 silver-gelatin prints taken by photographer Edward S. Curtis, of which only a fraction are on display.

“His photos deserve an entire room, so we’re working on now. We’ll also have a documentary telling more about his work,” Molly adds. “Until people hear the story they don’t realize how important what they’re looking at truly is. He was the only photographer to record the tribe’s day-to-day life.”

The work of another photographer, Frank Rinehart, depicts stunning portraits of tribal leaders taken in a makeshift studio during the 1898 Omaha World’s Fair.

Toward the end of the museum, the collection transitions to the Civil War era. An entire room is dedicated to President Abraham Lincoln, showcasing the desk from his lawyer’s offi ce and a legal document signed by Honest Abe.

“We also have one of the last 36-star Grand Luminary fl ags used for President Lincoln’s funeral,” says Jeff. “It’s likely this flag draped over his coffin.”

The exhibits continue to amaze guests, including: a cannon used at the Battle of Gettysburg during Pickett’s charge, President George Washington’s leopard-skin saddle pad, correspondence signed by Washington, Thomas Jefferson and John Adams and Custer’s fi eld desk where he would have made the ill-fated decision that led to his last stand.

Another area which draws attention is one showcasing Buffalo Bill’s Wild West Show costumes and props. Among the collection is a travel trunk and gun of a young Annie Oakley.

The last area comes back to Johnny’s passion for conservation. One wall marks President Theodore Roosevelt and his National Parks legacy. Another shows the near extinction of the bison and its comeback. The fi nal wall shares a message Johnny gave at the University of Missouri School of Natural Resources in 1995. His speech included a letter written in 1854 by Chief Seattle.

“You must teach your children that the ground beneath their feet are the ashes of your grandfathers … the earth does not belong to man; man belongs to the earth … All things are connected like blood which unites one family … man did not weave the web of life; he is merely a strand in it. Whatever he does to the web, he does to himself.”

The Ancient Ozarks Natural History Museum spans a great many topics and people, painting a circle of life we are all part of today. What a wonderous thing that an arrowhead found decades ago made a young man curious enough to leave his own legacy for generations to come.

Tickets are $12 for adults, $5 for ages 4 to 12 and free for children 3 and under. Mention this article for a special $6 adult admission rate. Go to www.topoftherock.com for more information.