I begin my tour where other travelers have ended theirs, on the confi nes of the wilderness, and at the last village of white inhabitants, between the Mississippi River and the Pacifi c Ocean. I have passed down the valley of the Ohio, and across the state of Illinois, in silence! I am now at the mines of Missouri, at the village of Mine a Burton, and surrounded by its mineral hills and smoking furnaces.

On Nov. 6, 1818, an intrepid explorer named Henry Rowe Schoolcraft left Potosi to begin an epic trek through an area that was yet to be called the Ozarks. Near penniless after the failure of his father’s glassworks, and unprepared for the rigors if the wilderness, the 25 year old undertook the venture to fi nd fame and fortune. His journal left behind one of the best accounts of the landscape in the days before Missouri became a state.

Two hundred years later, another explorer set forth from the same location to follow in Schoolcraft’s footsteps. Rick Mansfi eld, a minister, storyteller and author from Ellington, often portrays Schoolcraft in presentations around the state. Hoisting a pack and revisiting the explorer’s adventures seemed a logical step for the former Army Ranger.

Rick fi rst learned of Schoolcraft at age 10 when a preacher read him passages from the explorer’s journal. Three years ago, Rick was asked to portray him for an annual event at Round Spring on the Ozark National Scenic Riverways. Joined by Ellington High School student Cynthia Deas, who portrays Schoolcraft’s companion, Levi Pettibone, Rick shares the story of this journey to many people who have never heard of Schoolcraft.

His goal in reliving the trek is two-fold. He wants to ensure Schoolcraft’s contributions to our knowledge of 19th-century Ozarks culture are not forgotten and to show others that outdoor adventures are within their reach, no matter their age or physical condition.

Others have walked Schoolcraft’s route southwest from Potosi to an area east of Springfi eld and back, most notably Milton Rafferty, a professor from Missouri State University who spent most of his spare time documenting the path. But Rick believes he is the fi rst to do it on Schoolcraft’s 93-day schedule, which he hopes will be complete Feb. 4.

That meant leaving with winter approaching, sleeping on the ground and covering 900 miles counting the return. It was a challenge Rick, who is 64, wasn’t certain he could meet. “I just thought how neat it would be to replicate that,” says Rick, a member of Black River Electric Cooperative. “But I didn’t tell many people at fi rst. Because I’ve got a few health challenges like most of us do as we get older. I thought, ‘What if I get out there and can’t do it?’ Because really I hadn’t slept under the stars for probably two decades.”

Rick’s doctors encouraged him to build up his endurance before leaving, something he fully intended to do. But life — including leading a clean-up effort that removed 40 tons of debris from Current River — got in the way. “The fi rst thing I knew, it was Nov. 5 and I hadn’t built up to it,” Rick says. “I hadn’t had a pack on. I hadn’t hardly gone out and walked more than 4 miles.”

Undaunted, he left Potosi at 3 p.m., around the same time and date Schoolcraft began. He covered 3 miles that fi rst day. He spent a pleasant night under the stars and had high hopes the rest of the journey would continue that way. He was wrong.

“I’ve slept on some pretty rocky ground,” he says. “One night I tried to set my tent up early because I knew it was going to be a rough night. A gust of wind hit and snapped the poles.”

He’s had nights when it was too wet or windy to build a fi re and days when the mercury dropped to 12 degrees. Unlike Schoolcraft, Rick still had commitments that required him to return to civilization from time to time. “I’ve had to go back and forth a lot,” he says. “I’ve preached two funerals, married one couple and studied with them prior to the wedding. I’ve done 17 public appearances including seven as Santa Claus.”

Faced with staying on schedule yet still meeting his obligations, Rick did one 40-mile stretch in 48 hours. He often walked in the dark, guided only by the moon and stars. This led to a scary encounter in Douglas County.

“I was crossing about a 12-acre fi eld, when I met what I’m going to guess was a bull because he was in there by himself. And whether he had combat or compassion on his mind, I wasn’t prepared for either,” Rick says.

Traveling by himself in the winter, Rick keeps in touch with his wife, Judy, through a satellite messenger that can send reassurance messages or an S.O.S. if he has an emergency. He keeps a length of fi re starting cord tied around his waist and fi rst-aid supplies close at hand. 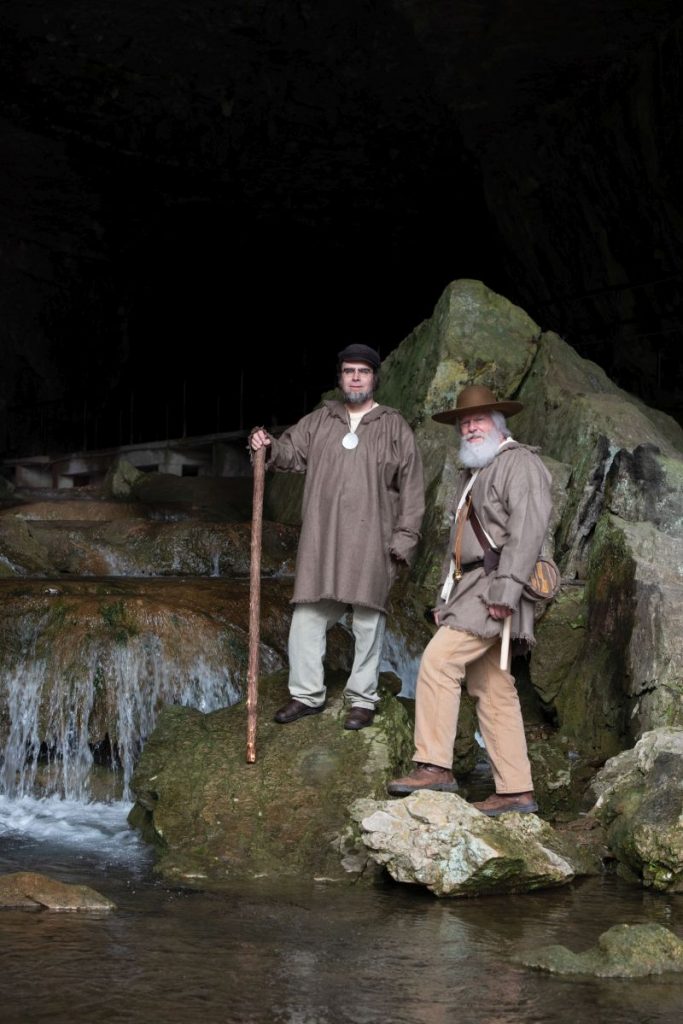 Above: Rick Mansfi eld, right, is joined by fellow Henry Rowe Schoolcraft portrayer Eric Fuller during a stop at Smallin Cave in Ozark, one of the places mentioned by the explorer during his trek in 1818-1819. Below: Schoolcraft posed for this painting in 1852.

Since the demise of his tent, he uses a wedge of canvas that is open to the everpresent fi re. His pack has slimmed from 50 pounds to around 30 pounds.

Along the way, Rick has met some wonderful people who have helped guide him to landmarks noted in Schoolcraft’s journal. He’s also been assisted by other Schoolcraft researchers and portrayers, including Bob Kipfer and Eric Fuller.

Rick has relished the immersion into nature and the incredible beauty of the Ozarks. One location he was seeking was Smallin Cave located near Springfi eld. He did not know the cave visited by Schoolcraft is now a commercial cave, where Eric does presentations on Schoolcraft and serves as the cave’s resident archaeologist. Rick was blown away by the splendor of the cave, not to mention the fact that here he knows he is literally standing in a spot Schoolcraft visited.

“Because of his journal, we can take you to the exact place where he was in the cave. The trek has been very neat, but when I am actually standing and my feet are where his feet were 200 years ago, that is a connection to history.”

The modern explorer also was assisted by Jim Fisher, a distant relative of one of the two guides who accompanied Schoolcraft. Jim led him to the lead mine near Springfi eld that was Schoolcraft’s ultimate destination.

You can follow Rick on Facebook at www.facebook.com/rick.mansfi eld.96. He plans to write a book about the adventure. To contact him call 573-663-2269 or email emansfi eld2004@yahoo.com.