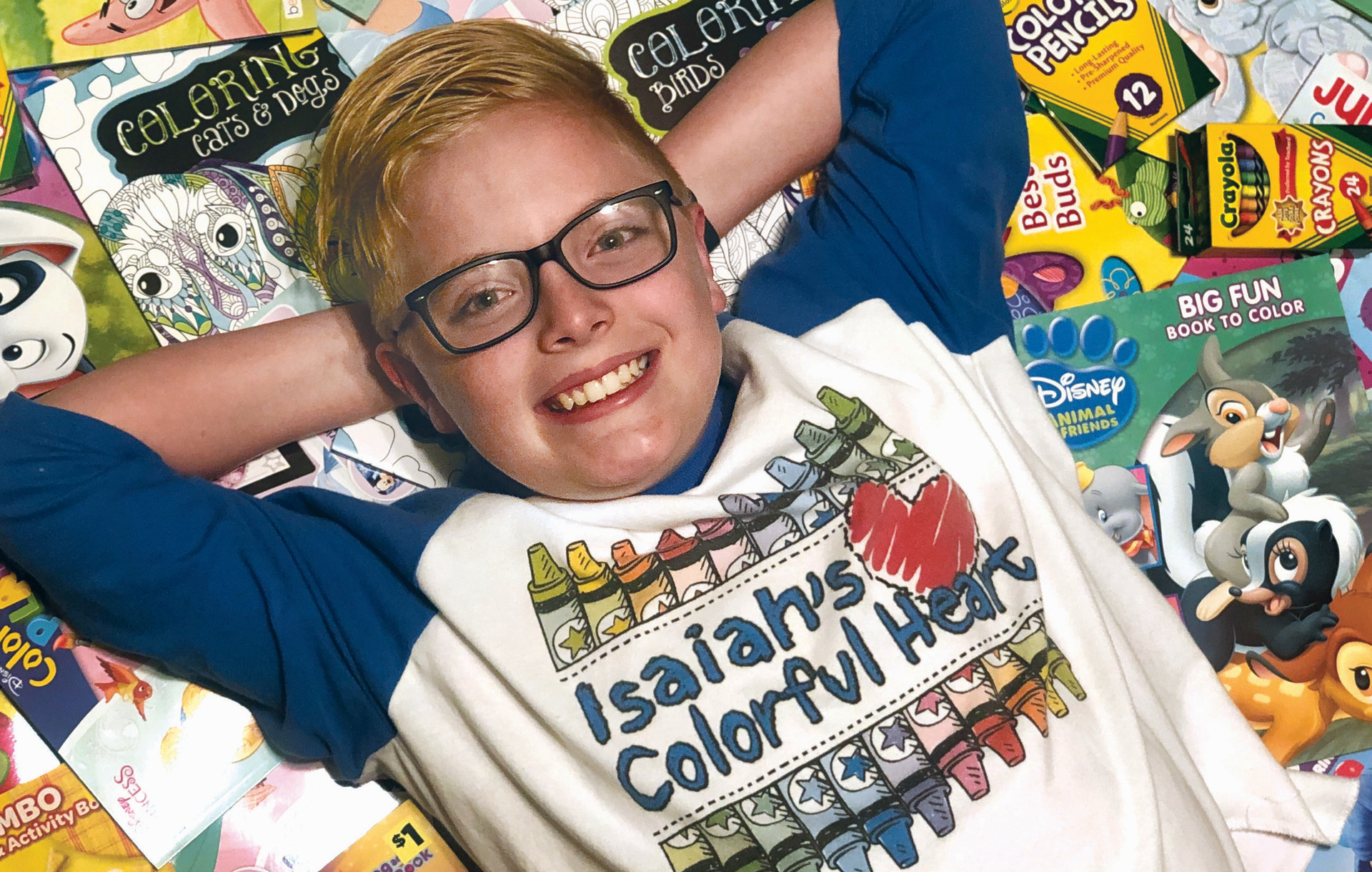 On a Mission to Spread Healing Smiles

Five years ago, Isaiah Mills was at St. Louis Children’s Hospital for heart surgery to install a pacemaker. The 5-year-old was scared. To alleviate Isaiah’s fear, a nurse gave him a goody bag with coloring books and crayons hoping it would brighten the young boy’s mood. As a thanks, Isaiah colored a picture for everyone on staff.

That kindness is the root of a project Isaiah and his family started a few months later called Isaiah’s Colorful Heart. Isaiah makes it his personal mission to get coloring books and crayons into the hands of any child who finds themselves in the hospital, especially during the holidays.

His mother, Jamie, recalls the day she and her husband, Jason, got a call from their son’s school that changed everything.

“He was at the top of the slide on the playground, passed out and fell,” says Jamie. “He just kept having spells where he’d pass out a few seconds.”

Isaiah’s first cardiologist thought Isaiah had a heart arrhythmia that he’d outgrow, like many kids often do. So his parents were given an external heart monitor. But after five months, his doctor sent him to another cardiologist at Washington University in St. Louis who fit him with a small internal monitor to constantly gather information.

Jamie, a nurse at Fresenius Kidney Care in Farmington, said it was eventually determined Isaiah had been born with a sinus node dysfunction — where the heart can’t keep the heart rate consistent and is unable to keep up with the level of activity.

Dr. Jennifer Silva, Isaiah’s cardiologist and surgeon at St. Louis Children’s Hospital, had Isaiah’s parents rush him to St. Louis. It was decided he would have a pacemaker that week. Thankfully, that resolved the issue.

“Isaiah has grown and matured so much over the years,” says Jennifer, who now feels like extended family. “He demonstrates empathy and gratitude well beyond his years.”

The specialist adds Isaiah wants to bring joy to other children who have cardiac issues. His generosity has brought smiles to many young faces during what can often be uncertain times in the hospital.

Ask Isaiah how having a pacemaker changed his life and he says, “Well, I can’t play football.” Then he smiles and says, “But if we’re doing jumping jacks in gym class, I only have to use one arm. If they do pushups, I do situps.”

Most of the time Isaiah says he doesn’t think about it and doesn’t usually notice when his pacemaker is “pacing” — what it does to keep his heart working as it should.

Because of continued growth, Isaiah will likely have a surgery in the next year to change his pacemaker battery and put in a new, longer lead line. For health and COVID-19 issues, Isaiah and his 7-year-old sister, Keeley, attend school virtually. When Isaiah can, he plays baseball and other sports by wearing a paceguard, a hard plastic disc, to protect his pacemaker.

When he’s not being a fifth grader or hanging out with his sister, Isaiah is gearing up for the Christmas deliveries he and his family have been making for years to medical centers and hospitals in the area.

“Being in the hospital can be a dark time,” Isaiah shares from experience. “Especially now, when you can’t always have family with you and nobody is looking toward the future very much.”

After his hospital stay, Isaiah told his parents it bothered him that not every kid could go home from the hospital during the Christmas season. He said he wanted to give something back like the nurse gave him.

“I wanted to bring cheer to other kids who were in the hospital and scared like I was,” Isaiah says. “So we spread smiles one coloring book at a time.”

With the help of a local graphic designer, the Isaiah’s Colorful Heart logo was created. Isaiah made flyers and shared them everywhere he went. Collection boxes were set out. A Facebook page was created by his parents to help Isaiah’s efforts. Soon, donations began pouring in from churches, schools, neighbors and businesses. When cash donations are made, Isaiah and his family make the money stretch as far as possible, buying items on sale.

“The goal his first year was to collect 100 coloring books,” says his mother. “I think he collected 700 that year.”

The next year they collected 1,000, with the number growing each year. To date, Isaiah’s Colorful Heart has collected more than 11,000 coloring books, crayons and markers to share with kids in the hospital at Christmastime.

Isaiah says he’s stopped setting collection goals because, “I don’t want anyone to be disappointed if we don’t reach a number. I look at whatever we collect as that many more smiles we can share.” One year when his family went to Disney World, the theme park found out about Isaiah’s project and invited him for photos with Mickey Mouse, who even autographed coloring books for Isaiah to share with other heart patients. Interviews with area television and radio stations have helped Isaiah get comfortable with promoting the project.

Last year, as they delivered items to St. Louis Children’s Hospital, Isaiah got a chance to meet St. Louis Blues hockey players Alex Pietrangelo, Jordan Binnington and Ryan O’Reilly, as they headed out the door. “I about passed out then, but in a good way,” says Isaiah, smiling.

Every December, arrangements are made to drop donations at the door of St. Louis Children’s Hospital and other medical centers in the area. Preparing is a family affair, with each coloring book stamped with the mission’s logo.

There’s no Grinch-like heart in this kid. His heart is gold and as big as the moon, just like his smile he shares with everyone he meets.

You can reach Isaiah and his family at P.O. Box 150, Fredericktown, MO 63645 or by sending an email to isaiahscolorfulheart@hotmail.com. Follow Isaiah’s Colorful Heart on Facebook for updates.