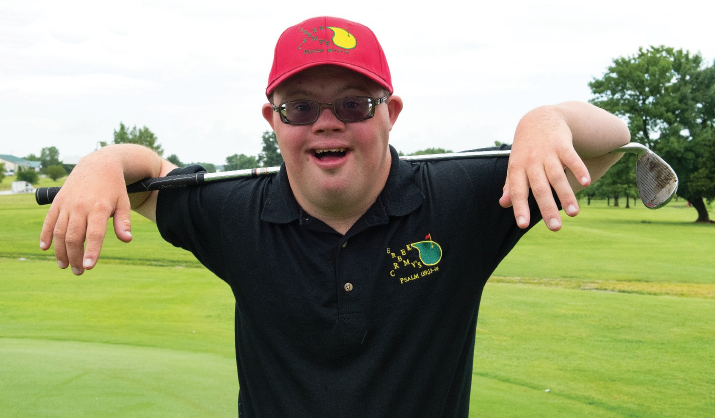 When Jerry Marti told his son that the family had just bought a golf course, Jeremy answered in his usual brief way: “Awesome! J-Dawg’s Golf Course.”

The 9-hole course began life in 1952 and has been known as the Lamar Country Club for most of its existence. But lately it had fallen on hard times, with fewer members sparking higher dues for those who remained. Enter the Martis, who live just a swing away from the course’s well-manicured greens. They took over June 1, much to the delight of their son.

“I always had in mind that there would be a place for him to work at this golf course,” Jerry says. “We live within golf cart driving distance of this course. So now Jeremy can get himself to and from work by driving a golf cart.”

Born with Down syndrome, Jeremy wasn’t expected to talk or have the muscle coordination to do normal daily activities. But that diagnosis was unacceptable to his determined parents, Jerry and Debbie. Early in his treatment they discovered golf could make all the difference in his development.

Down syndrome is caused when a child is born with an extra copy of chromosome 21. Those with the syndrome typically have growth delays, intellectual disabilities and other issues.

Jeremy started playing golf at age 2 and loved it from the start. His parents used his love of the game to encourage him when he faced life’s challenges.

“In all of Jeremy’s therapies the motivation was ‘if you do this therapy it will help you get stronger which will help you hit the golf ball farther and higher,’ ” Jerry says. “Whether it was strengthening his legs or his arms or abdomen, that was the constant motivation. ‘This will help you play better golf.’ ”

He acquired math skills in order to fill out his own scorecard. He learned to read so that he could read the menu and order food when playing at a course away from Lamar. When he became frustrated trying to do the things others take for granted, Jeremy coined the phrase “I like hard.”

A natural left-hander like his dad, Jeremy was strongly right-side dominant in his early days. For this reason Jerry forced him to change hands so that his left side would better develop. This had the advantage of the son mirroring what his father was doing.

Now 23, Jeremy has progressed far beyond the dire prognosis of those early doctors. As the president and “Top Dawg” at Jeremy’s Creek, he cuts grass, trims trees and rents golf carts to course duffers. He’s a self-starter, always searching for what needs to be done and taking care of it on his own.

“A good day is working in the morning and playing golf in the afternoon,” Jerry says.

Along the way, Jeremy has turned into a fine golfer. He’s played in the Special Olympics State Tournament where he usually wins his division. He’s a regular at the Fellowship of Christian Athletes Pine Needles Camp, where he gained his J-Dawg nickname from Christian singer Toby Mac. He played on Lamar’s High School golf team, which finished just short of making it to the state tournament his senior year. He’s been known to beat his dad on certain holes.

“I would come out here and he would want to come with me,” Jerry recalls. “Initially it felt like he would swing a hundred times before he hit it. But he never got discouraged and he just loved being on the golf course. So we spent a lot of time here. Then as he got better probably at about age 6 or 7 I would take him to play in scramble golf events with me.”

The youngster quickly proved his worth in the scrambles, where golfers play the best shot out of a foursome.

“Jeremy has a gorgeous golf swing,” Jerry says. “Almost without fail when he would swing and hit the ball it would be ‘wow’ because he had such a gorgeous swing. When you are 7 and you hit the ball 60 yards, that’s a good hit. He would have good ball flight, and for his age and size it was a very nice hit. It surprised people how well he would play.” But it’s in his short game that Jeremy really shines. While others might take a long time considering the lay of the green before putting, Jeremy seems to have an instinctive feel for the putt. He steps up and quickly puts the ball in the cup.

“He is hands down a better putter than I am,” Jerry admits. “He just reads greens very well, therefore he putts very well.”

Jeremy’s presence lends a special feeling to the golf course, which is undergoing a major renovation with the addition of foot golf and a new restaurant. He manages to make everyone feel special and has a huge following that extends well beyond Lamar.

He likes to point to a sign hanging behind the counter in the pro shop. It reminds players that they are not Jack Nicklaus or Tiger Woods, “So don’t take the course or your game too seriously and have fun.”