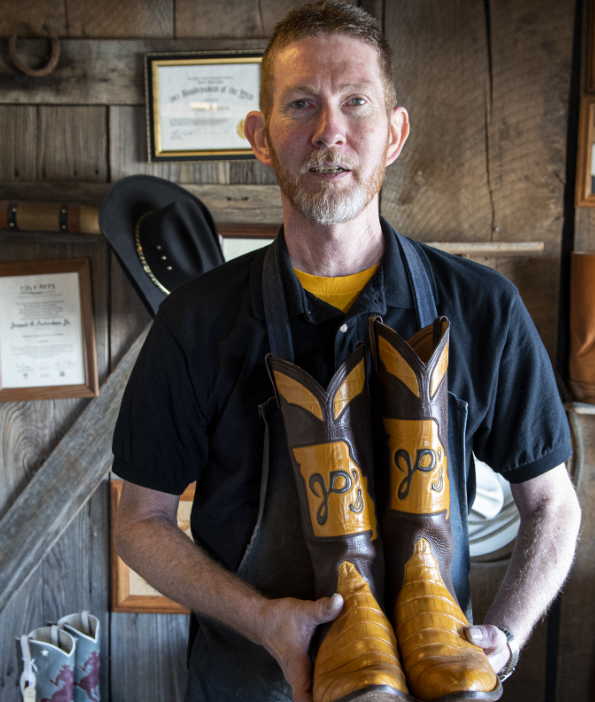 It’s a typical day at JP’s Custom Handmade Boots on the square in Camdenton. Joey Patrickus has his workday all planned. He hopes to get the steel shank cemented into two pairs of boots he’s making and then stitch the outsoles. He settles in with a cup of coffee at his side.

Then the door opens, and a customer walks in with boots that need the soles reattached. Joey talks him through the process, puts a tag on the boots and places them on the repair shelf. No sooner has that customer left than another walks in. This one needs a leather thong attached to a holster to keep his pistol from slipping out.

The bell above the door rings again, and this time Joey patiently explains to a lady why her bargain athletic shoes aren’t worth fixing. The phone rings a few times, but in between interruptions he manages to repair two pairs of shoes and finally get those shanks installed.

It’s no wonder orders for handmade boots — the main purpose behind the little shop — stretch out six months for delivery.

“It’s feast or famine,” says Joey. “You go a day or two and not see anybody, your phone doesn’t ring. And then you will have a day when you have 10 to 12 people in with soles and heels. Now, instead of not having much to do you have enough work for the next week and a half.”

Joey — the fourth Patrickus to carry that name — is carrying on the legacy passed down to him by his father, Joe, who started JP’s Boots 40 years ago. The elder Patrickus learned to make shoes from an uncle but taught himself how to make boots. Once he mastered the craft, he passed his skills on to his son through the Missouri Folk Arts Apprenticeship program.

“It was structured,” Joey recalls of the program, which pays a master artist to share his skills. “It wasn’t just come in and hang out and do the repair work and watch over Dad’s shoulders. I did make a pair of boots through the apprentice program and I still have them.”

He worked nights and weekends with his father but decided to pursue a career in law enforcement instead of following the family tradition. That lasted until 2004, when Joey left police work for good. Before his father would take him back, however, he made him prove his worth by making another pair of boots. This pair — made from tan alligator tail with the JP’s Boots logo inlayed on the shafts — are on display in the shop.

Working together, the two turned out a tremendous amount of custom work over the years. “Dad used to say two people can work four times as hard as one person,” Joey says. “I could never understand the logic in that. But I can tell you when Dad and I were both going, man we could whip some stuff out.

“After he wasn’t there anymore I was like ‘now you have to do it all and there’s only so many hours in a day.’ ”

The two worked side by side until 2011 when Joey officially took over the operation. But Joe continued to come in, and Joey continued to pick his brain on everything there was to know about bootmaking. Joe passed away in 2018, taking with him a lifetime of knowledge.

“He is sorely missed,” Joey says. “A lot of the information is just gone. Almost every day there’s something I want to ask him.”

That’s especially true when one of the vintage machines breaks down.

Joey is just one of a handful in the U.S. who earn a living providing custom, handmade boots that mirror the customer’s feet. There are no off-the-shelf boots here, just dozens of wooden lasts, antique tools and leather ranging from calfskin to python, elephant and shark.

He can make boots that fit problem feet, such as the ones made for a football player whose size caused him to break down factory boots.

Repeat customers hardly notice the difference between father and son. “If you ask him, he would say I was a better bootmaker than he was,” Joey says of his dad. “But I would tell him every day, ‘no I am not, I am still learning.’ He did everything better than I did, that’s just the way it is.”

At a recent boot and saddle maker roundup in Texas, he reluctantly entered a pair of his boots in a contest. It marked the first time boots with the JP’s logo were ever judged. This pair won first place in the dress boot category.

While he appreciates the honor, Joey gets more satisfaction from repeat business and other signs his customers like what he has created for them. One customer asked him to throw away his old boots after trying on the new pair for the first time. Then he left on a lengthy motorcycle trip with no other footwear.

There’s no end to the options Joey can add to a pair of boots, though all will have the same quality workmanship from the heel to the tabs that help pull them on the foot. This quality doesn’t come cheap. Prices start at $1,500 for a basic pair of boots, with 12-inch shafts and cowhide leather. Exotic leather can increase the cost to $1,900 for ostrich all the way up to $3,400 for alligator.

The sky is the limit for other options such as custom inlays, multi-row stitching and even gemstones.

Joey says demand for his services is up this year. He keeps turning out boots with no two pairs alike, following the time-honored traditions taught to him by his father.