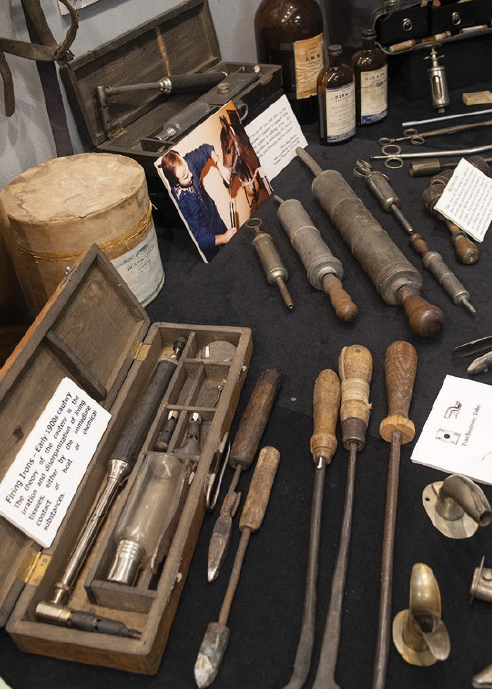 A walk through this central Missouri museum’s displays is not for the squeamish. You can touch a hairball here, along with horse teeth, snake-skins, bones and feathers. Rooted in the interest that most people have for wild creatures — particularly pets and beasts of burden — the Missouri Veterinary Medical Foundation Museum in Jefferson City pays tribute not only to veterinarians, but also to the animals that have beneﬁted from veterinarians’ services for hundreds of years. Historic items, instruments and documents plus the aforementioned hands-on displays offer visitors an opportunity to see the evolution of veterinary science and its hoof-in-hand relationship with Missouri’s agricultural history.

“I think they’re drawn to the museum by the curiosities, such as the giant hairball, but once they get here, they see the history that’s behind the profession and where it started,” says Richard Antweiler, executive director of the Missouri Veterinary Medical Association.

Richard adds that the small museum welcomes groups and hosts hundreds of schoolchildren annually on tours and is afﬁliated with the Missouri Veterinary Medical Association. When established in November 1978, it was the only veterinary museum in the U.S. Presently, it is one of only three privately held museums of its kind in the country. It was the dream of its original director, Jack Kroeck, who along with nine other veterinarians formed the Missouri Veterinary Medical Foundation in 1975.

The museum is neatly organized into several areas. Visitors are invited to take a self-guided tour and see the thousands of items dating from the 16th century to present day.

Behind a large mural of a veterinarian caring for a mule at the start of the tour stands the iconic image of the country vet: a trunk, circa 1910, which carried veterinarian’s equipment on the back of a buggy, replete with instruments from the early 20th century.

The book display highlights veterinary science books and reference guides from the 1500s — a horse treatise handwritten in German by an unknown author — to the modern day.

“Veterinary medicine has a rich history in Missouri,” says Richard. “We are at the crossroads of the country, and animal agriculture, where veterinary medicine started, was a dominant force here. Animal diseases were serious business, and companies that made treatments and the veterinarians that delivered them were an important part of the economy and everyday life.”

Included with the books are some of the ﬁrst state vet’s documents in the form of Paul Paquin’s journal and ledger from his travels in the 1800s. Paul was the ﬁrst Missouri State Veterinarian and founded the pathology and hygiene labs at Missouri State University in the late 1800s. The museum highlights achievements and daily toils of other veterinarians, including Dr. Earl Sloan of St. Louis, a veterinarian who treated trolley car horses in the late 1800s and went into the business of making patent medicines.

After the book section, prepare to see the tools of the trade. Any fan of English author James Herriot will appreciate seeing antique instruments including a hog catcher, balling guns — devices used to deliver food or boluses (pills) to animals — or a Swiss trocar, used as a portal for placement of other veterinary instruments or to allow the escape of gases and ﬂuids from organs.

The museum also displays a U.S. Army X-ray machine that a veterinarian purchased after World War II, believed to be the advent of X-ray use for animals. This machine is located next to the military display, honoring veterinarians from the Civil War to the present day for their service to the U.S. Another interesting item includes a homemade exam table from the 1920s. It makes clever use of the bottom part of a barber’s chair and tabletop so that the surgical table could be angled.
Other exhibits include a wide array of patent medicines, featuring potions for “man and beast.” Some contain up to 40 % alcohol. Of interest is the Dr. L.D. LeGear trunk, owned by a horse doctor who started his own patent medicines company in Texas and later St. Louis.

LeGear medicine bottles can be easily acquired in today’s antique market because of the large quantities produced. Veterinarians often concocted their own medicines until the 1950s — when the Federal Drug Act prohibited the practice.
Other inventions and subsequent patents by veterinarians are on display. Missouri had its share of famous vets, including the Shikles brothers, J.R. and E. A., from Dear-born, who invented a vaccinating kit in 1924 that veterinarians used for hog cholera until the 1950s. During this time period, Missouri veterinarians vaccinated 30,000 pigs annually.

“These are the things that the kids love to see,” Richard says, pointing to skeletal remains in a case. The collection also includes Siamese piglets in a jar, hairballs, a whalebone and X-rays that show broken bones. Other X-rays show more unusual items, such as a ﬁshing rod that a dog swallowed and a ﬁ sh hook ingested by a cat.

Curators are always adding items to the displays, thanks to the generous donations of legacies from veterinarians throughout the state and country. “We focus on items we currently do not have, on items that are rare and on items that help illustrate the various aspects of veterinary life and practices throughout history,” adds Richard. “I can’t say we are on the hunt for a particular item, but we know it when we see it.”

The Missouri Veterinary Medical Foundation Museum is located at 2500 Country Club Drive in Jefferson City. Hours are 9 a.m. to 4 p.m. Monday through Friday and Saturday by appointment. Admission is free. For more information call 573-636-8737 or visit movma.org.