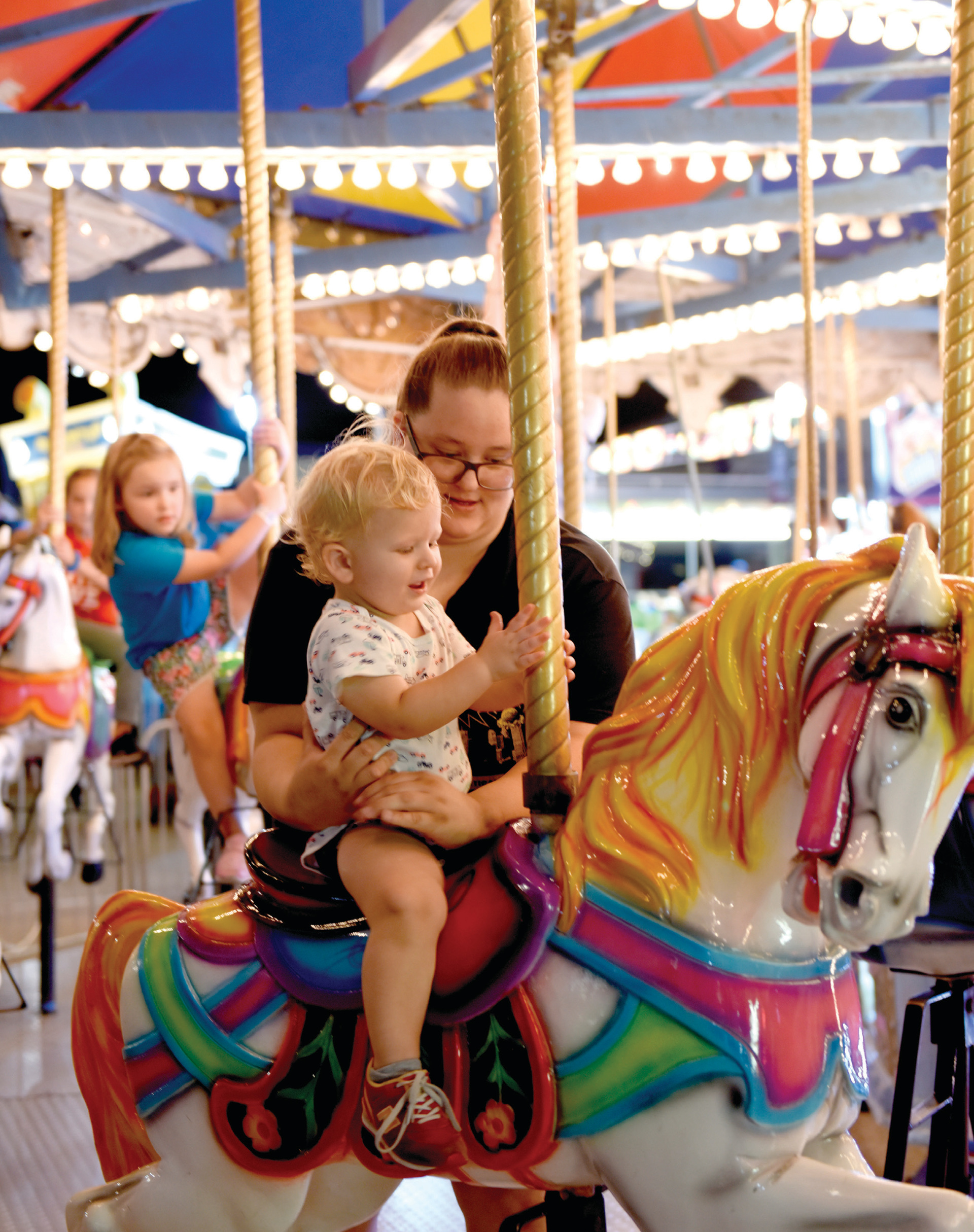 Kids of all ages enjoy the carnival rides and bright lights during Lamar’s old-fashioned fair.

Editor’s note: The following information is accurate as of July 13. Please refer to Lamar Free Fair on Facebook for the entire fair schedule and updates.

Sometimes the hottest days of summer can bring the most fun: swinging from tires over the creek, jumping from bale to bale as the hay is lined up along the fence line, listening to the music of the ice cream truck as it turns the street corner. Another sign summer is in full swing is when a fair comes to town.

“There’s no entry or parking fee charged like most fairs and any entertainment is free,” says 81-year-old Terry Moore, Bud’s oldest son. “The only thing you pay for are carnival rides, food and vendor items. Our fair is about as budget-friendly as you can get.”

As of our publication date, the Lamar Free Fair is scheduled for Aug. 8 through Sept. 6, but please refer to the contact information at the end of this article for further information.

Whether large or small, there’s a certain energy everyone feels when attending a fair. The putt-putt of old tractors and antique cars in the parade; a practiced wave from a newly crowned fair queen; the scent of cotton candy and ears of corn dripping with butter; the sight of kids preparing cattle for competition or the hawking invites from midway workers as the dog days of summer turn into nights brightly lit by carnival lights — it adds up to a lot of fun for all ages.

Each August, the town of Lamar swells from its usual population of 4,300 to an anticipated crowd of 10,000 for the fair, which offers midway rides for attendees on the last four days.

“This is a big deal in our part of the state,” says Terry’s younger brother, Edwin, 74. “People even come here from Oklahoma and Kansas. We appreciate it.”

The fair has been part of Terry’s and Edwin’s summer dating back to 1943 when their father started organizing the local fair. Sadly the family patriarch passed away suddenly in 1968 at the age of 59. After watching their father gather the community together each summer for nearly 25 years, his sons chose to carry on as co-managers of the Lamar Free Fair.

“When Dad came home from serving in France during World War II, he wanted to expand the farming expo they’d been hosting each summer,” Terry says. “With the donations of the townsfolk and dozens of volunteers, it’s become much of what is here today.”

The Moore Pavilion located just off the square was built in honor of their father and serves as home to numerous livestock competitions during the fair. Most of those who participate are 4-H or FFA youth vying for more ribbons, trophies and possibly even the sale of their prize farm animal. Some, like 7-year-old Cole Runnels shown on our cover, are just beginning their livestock show experience. 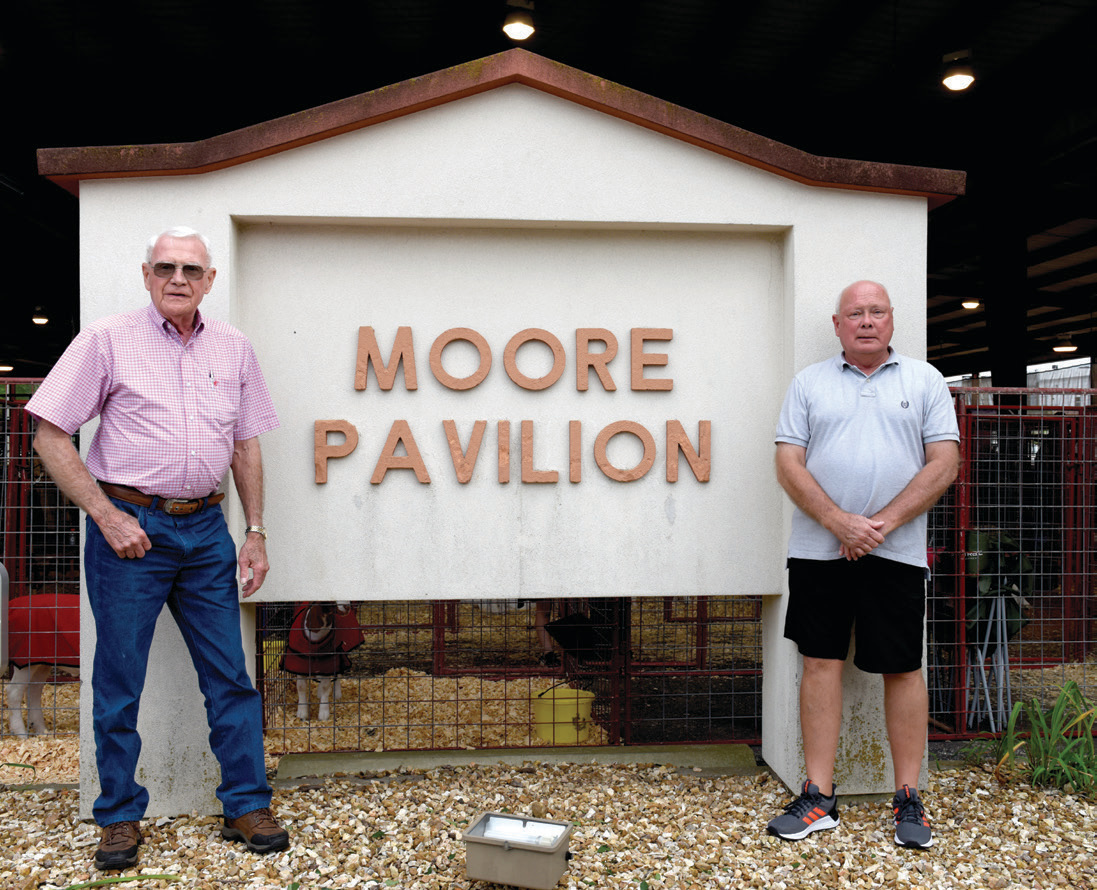 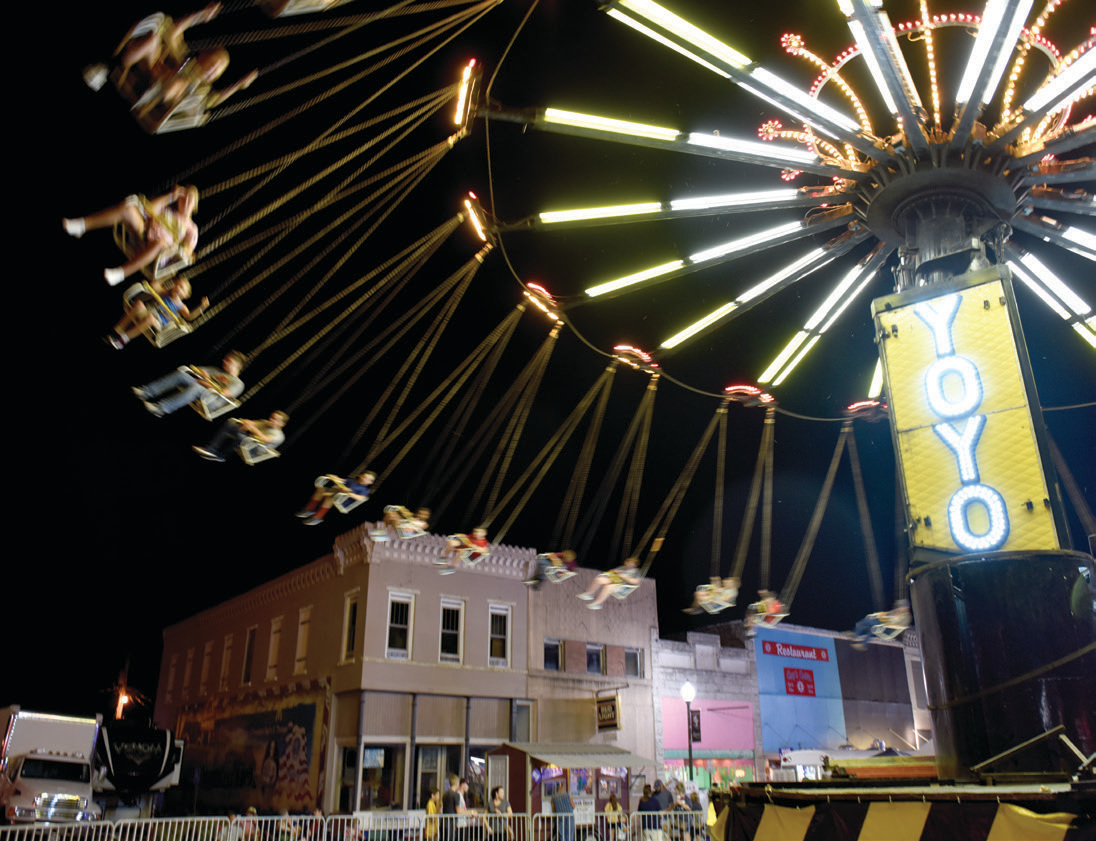 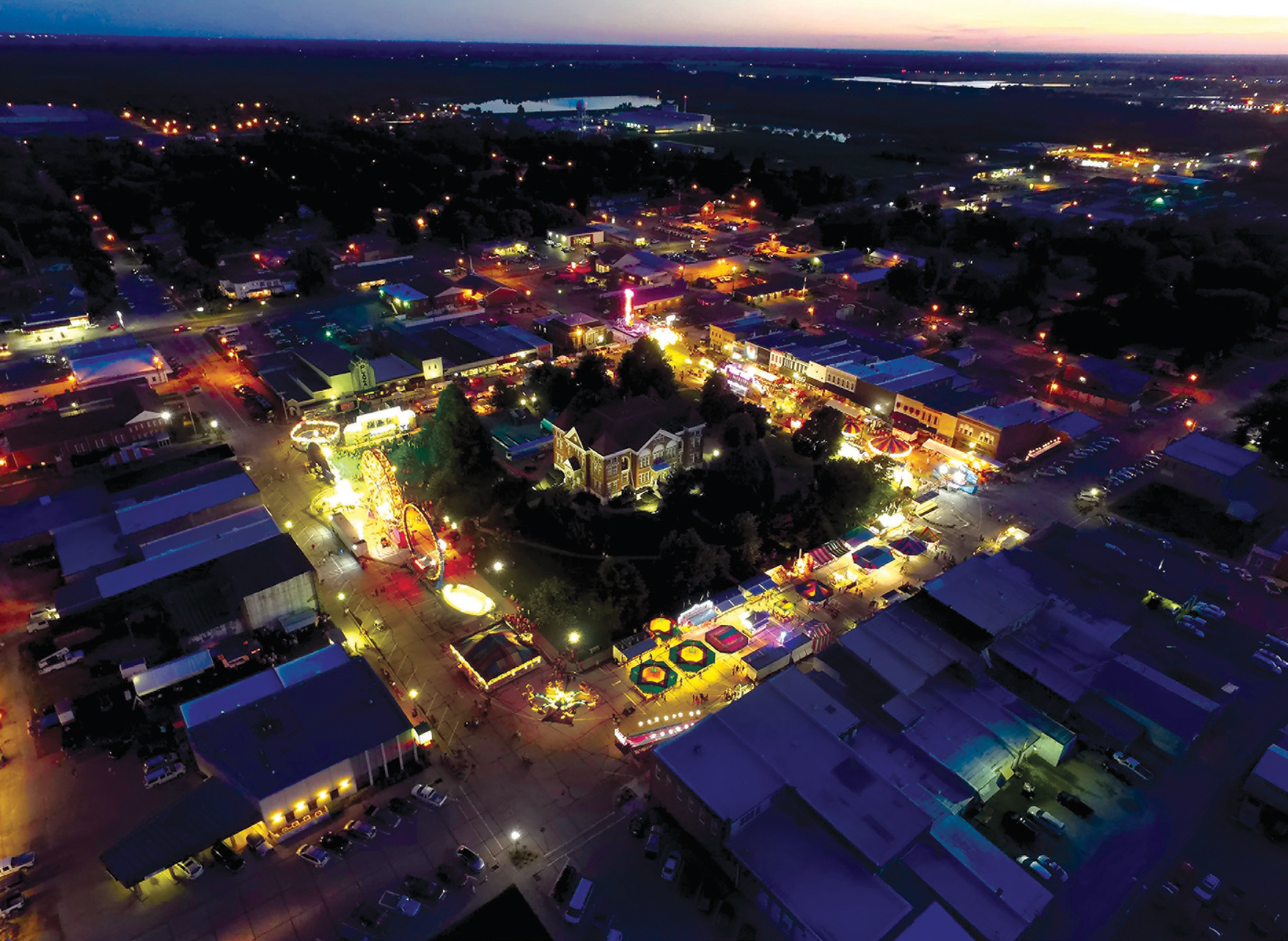 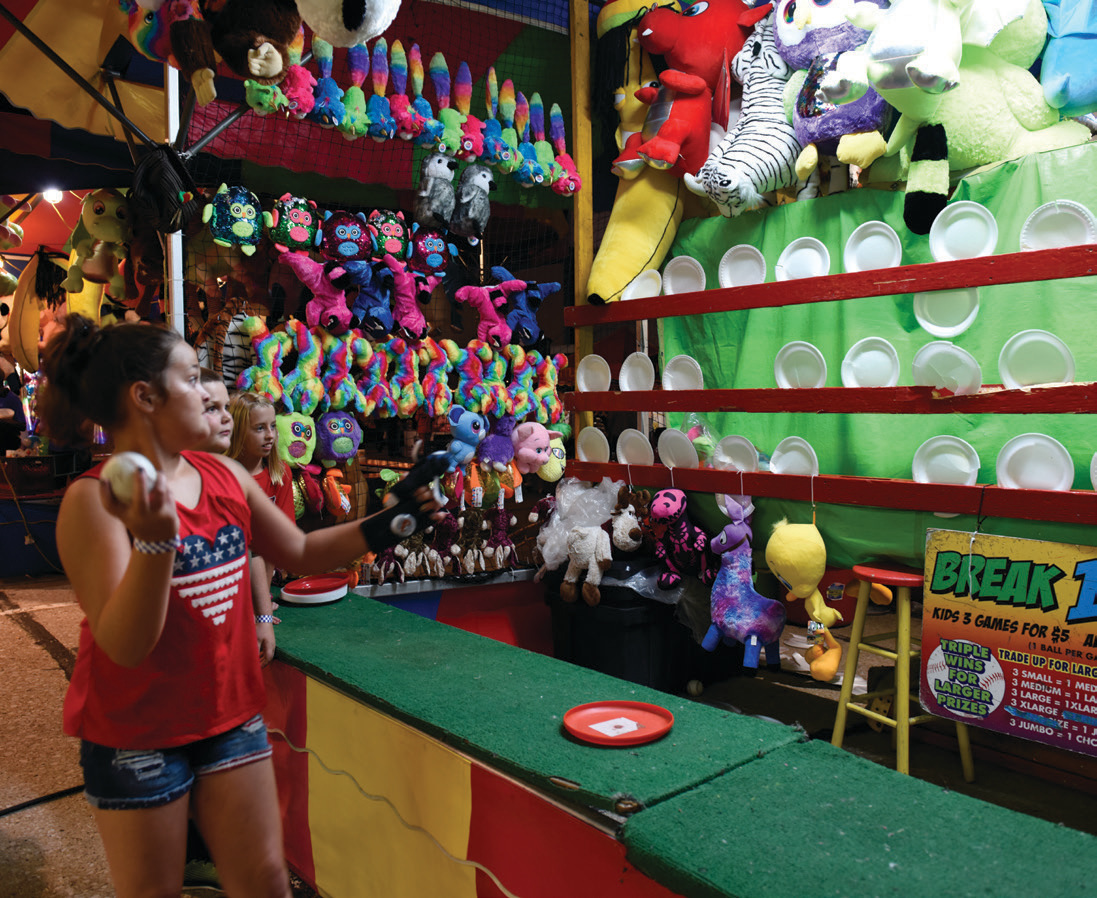 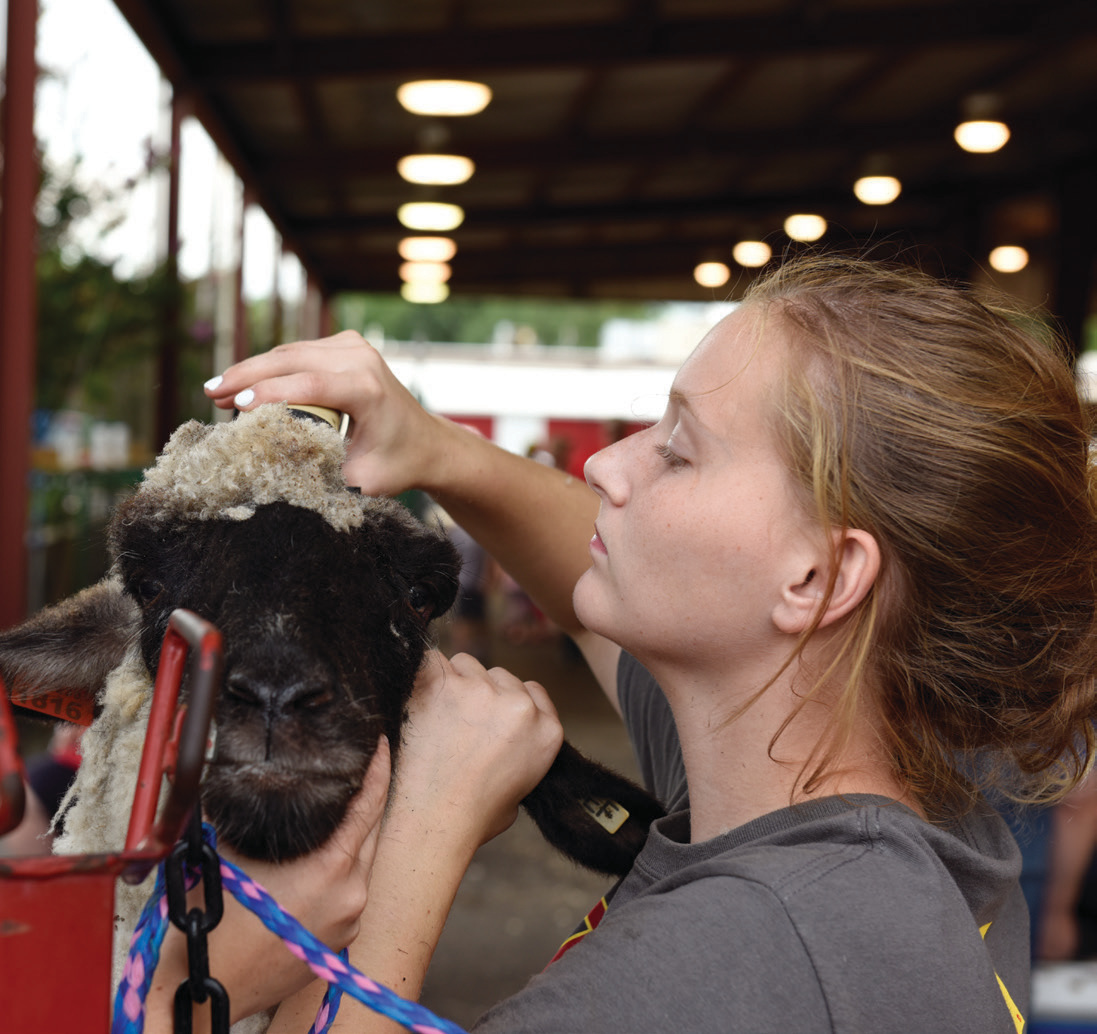 “Cole’s been showing calves since he was four,” says Allie Runnels, Cole’s mother. “He already loves showing cattle at the fair. He’s really excited to show again during the fair this summer.”

The youngster is certainly no stranger to cattle as his family runs a herd of 120 registered Simmental and Angus cows on their Jasper farm, which is served by Barton County Electric Cooperative.

“This is Ed and my 53rd year working on the fair I believe,” Terry says as he leans back and looks up at the ceiling as if to double-check the figure.

“Along with the city of Lamar, we have nearly 100 volunteers and businesses who help pull this together every year and they all get paid the same — one free barbecue voucher,” he adds. “Sometimes people say they feel they should step down because they’ve helped long enough, but we always tell them, The only way you can get off the committee is to die.’ Nobody’s wanted off the committee that bad so far.”

He smiles and notes that they do host a catered meal in February in appreciation of the volunteers, but Terry adds that’s also when the group starts talking about gearing up for the next fair.

“It’s a fairly well-oiled machine now, but you still need to go over all the details,” Terry says.

As local fairs go, this puts everyone’s best on display — besides the Moore Pavilion for livestock shows, the American Legion building off the square displays everything from garden veggies to flowers and quilts to woodworking. Local 4-H and FFA projects are also on display. While the carnival portion is only four days long, there are plenty of opportunities to join in some fair fun. The Rotary Club starts festivities with a queen pageant, there are 5K and 10K runs, music shows, a parade as well as an antique car, truck and tractor show and much more.

If people only attend for the food and carnival rides in the evening, they shouldn’t be disappointed. Ride options fill three sides of the town’s quaint square, with a fourth filled with numerous food and beverage selections. There’s even some local music to enjoy.

“We have a lot of out-of-state food vendors who’d love to be at Lamar’s fair, but we always say no thanks,” Terry says. “It’s a tradition that we keep food vendors local. The churches, civic clubs and schools prepare all the food so the local community can benefit from sales.”

Kids love it when they get to buy one of the fair’s popular little apple cider bears — a bear-shaped bottle filled with ice-cold cider — while adults enjoy buying slices of homemade pie and eating some of the best grilled burgers around.

Terry and Edwin are mum about how much the fair may cost them or the town, but they did say they were pretty happy to hand the city a good-sized check in 2018 to help offset power costs.

The brothers have hired Missouri-based Evans United Shows from Plattsburg as their carnival ride vendor. They set up more than 20 rides for fairgoers to enjoy. Armbands can be purchased so thrill seekers can ride to their heart’s content long into the night.

The fair is such a vital part of the community that schools close Thursday and Friday of fair week.

“We’re glad of having a reputation as one of the best little fairs in a four-state area,” Edwin says. “When you see generations of families come back every summer to make new memories, all the planning and effort is worth it.”

Terry nods in agreement with his brother.

“It’s a work of heart for us,” Terry says. “Everyone helps plan all year and some of it is a lot of work. When you see families return year after year, it’s all worth it. The smiles we see are priceless.”

“It’s also an honor to continue the legacy our father started decades long ago,” Edwin adds, “But that legacy is only as good as the community working with us. And we’ve got a good one.”

This year the Lamar Free Fair is scheduled for Aug. 8 through Sept. 6, with carnival rides on Aug. 26 through 29.

Armbands for rides are $15, if purchased in advance locally, or $18 at the carnival.