Whether you’re sending letters, picking up packages or catching up with an old friend you run into, the small-town post office is still, for many, a hub of communication. But according to Linda Lower, who has been a clerk in the Vandalia Post Office for 25 years, there’s another reason people visit and it has little to do with the mail.

“It is not unusual for people to come into the post office specifically to see the mural in our lobby,” Linda says. “They are usually from out of town, but somehow they know the mural is here. They always take a picture of it.”

Titled “Corn Harvest,” the mural has been displayed since 1942, a year after the post office opened. It depicts farmers harvesting corn and loading a wagon pulled by mules. It’s one of 29 post office murals in Missouri painted between 1934 and 1943. They are part of more than 1,200 murals commissioned by the U.S. Treasury Department’s Section of Fine Arts near the end of the Great Depression, according to author David W. Gates Jr.

“They were mostly installed in small communities in every state as part of the New Deal program of President Franklin Roosevelt’s administration,” David says. “The objective was to make people feel uplifted and positive during a difficult time in our history, while creating something of lasting beauty and significance to American citizens. Additionally, they provided work for unemployed artists.”

Post office lobbies were selected to display the art because at the time these were some of the most frequented businesses in each community. Most of the surviving murals remain displayed where they were first installed — usually over the door leading into the postmaster’s office.

An important objective of the Section of Fine Arts was to produce quality art which incorporated topics of local history and interest. The artists were commissioned based on their previous work or drawings they submitted, and the competition to be awarded a mural was open to anyone. The Section of Fine Arts approval process had no particular preference in artistic style. However, judging from the art that remains, the most acceptable subjects were local or historical places or events, people of local fame, scenes of daily life or postal history. 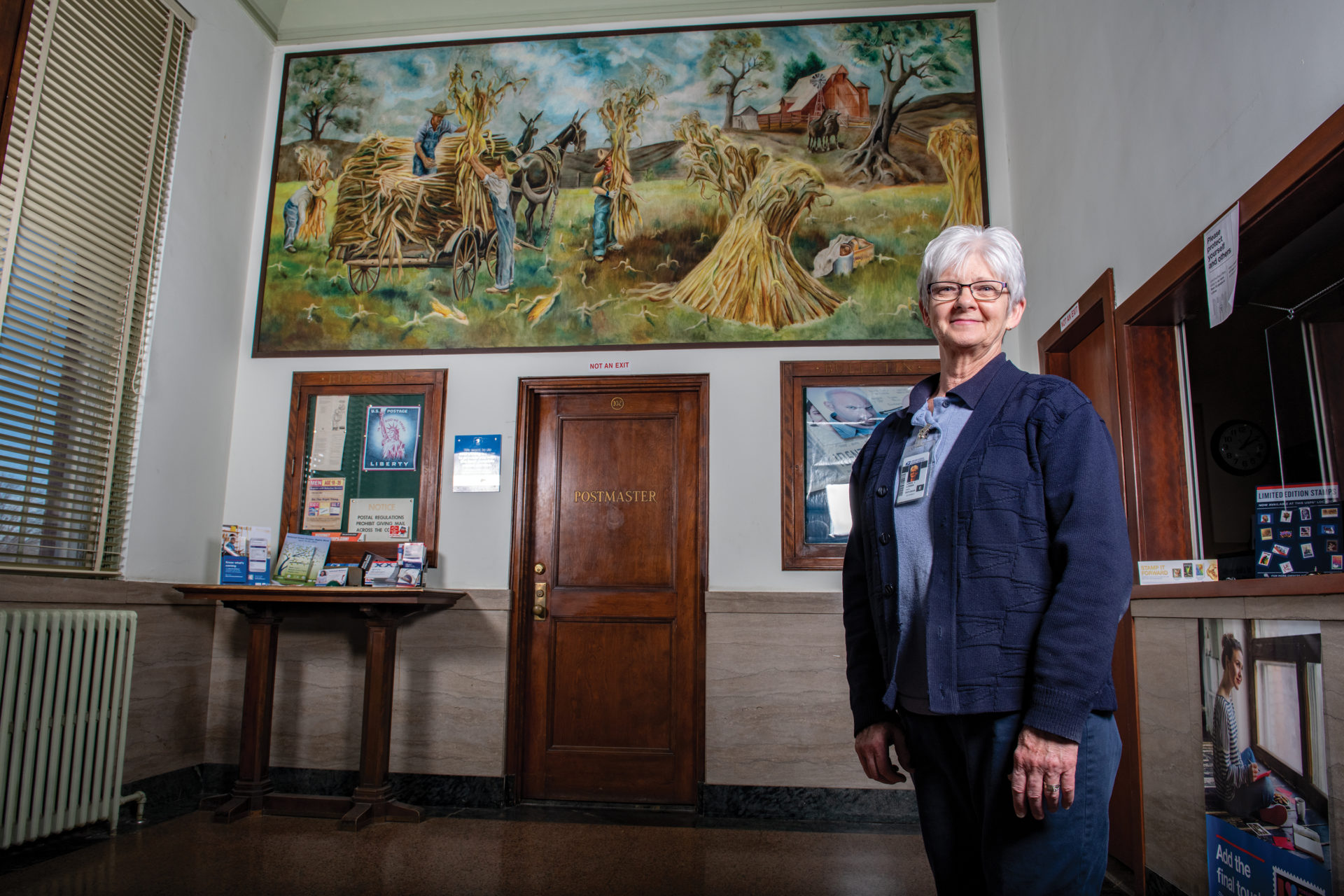 Once an artist was selected, they were encouraged to visit the location or at least write to the postmaster and important local citizens for suggested topics.
Most of the artists went on to have successful careers. Joseph Vorst, who painted the Vandalia mural as well as the mural in Bethany, is an example. Raised in poverty in Germany, Vorst fled as the Nazis came to power and he settled near relatives in St. Louis. For a while he shared a studio with renowned Missouri painter Thomas Hart Benton.

While most post office murals were painted on canvas, other mediums were also used. The 1941 mural in the Cassville Post Office by Edward Winter titled “Flora and Fauna of the Region” consists of three panels of painted porcelain. Two are devoted to native Missouri flowers and plants, while the center panel focuses on Missouri wildlife. Winter became a nationally recognized expert on enameling.

The Clinton Post Office contains the mural “Coon Hunt” painted by Richard Haines in 1942 and portrays a hunting party with their dogs staring up a tree trunk. Haines was one of the more prolific New Deal muralists. He moved to Los Angeles after World War II where he taught at what is now the California Institute of the Arts and the Otis Art Institute until retiring in 1974.

Some of the murals have been restored. Linda says the Vandalia mural was cleaned in 2005, which made the original colors as bright and prominent as when it was first painted. Many murals were painted when the New Deal was building new post offices. In those instances, murals were funded with 1% of the construction costs.

While the funds were primarily applied toward a mural, the dollars could also be used for other artistic embellishments to federal buildings. For example, in Vandalia the facade of the post office is decorated with three limestone sculptures of a plane, train and ship. Each represents a different vehicle the postal service uses to deliver mail.

The St. Louis Post Office contains the largest and most expensive mural project in the nation. Covering 3,000 square feet in nine large panels, the $29,000 commission was awarded to artists Edward Millman and Mitchell Siporin, both from Chicago. They took two years to complete the work.

In Missouri, and nationwide, the murals generally remain sources of local pride, even though they are also frequently overlooked. Often the background of the painters has been forgotten, as has the tie to the historic New Deal.
To formally recognize the artistic and historical importance of the murals in the history of the nation, in April 2019 the U.S. Postal Service issued a set of commemorative stamps that reproduce five of the murals.

For more information and to locate and see the Missouri murals, visit the interactive map at www.newdealartregistry.org/map/MO.
Winnerman is a freelance writer from St. Louis.