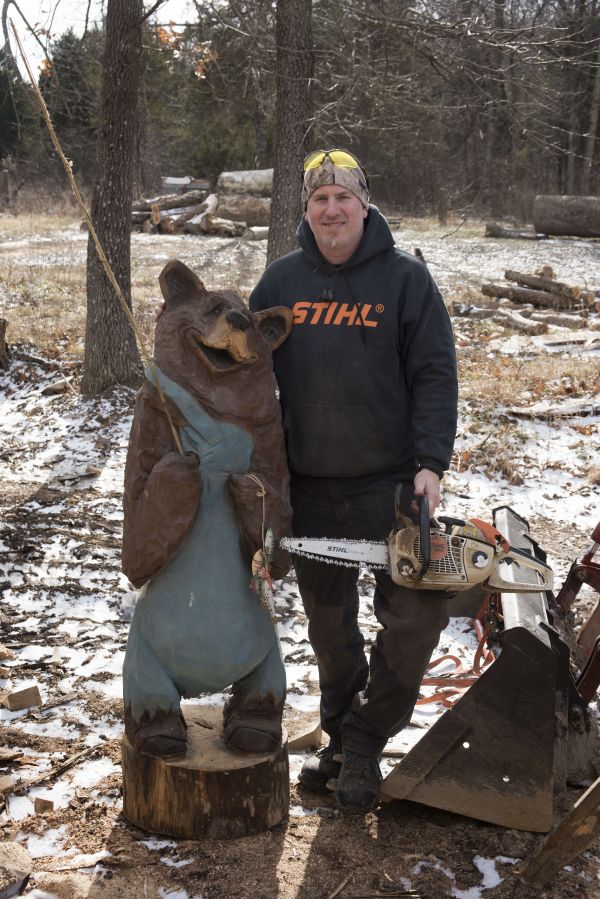 Strafford man carves a career with his chainsaw

The massive log stands on end as Jason Morton does a quick circle around the piece, looking for the right spot to begin. He fi res up the chainsaw, then quickly sets the handheld device to the timber, skillfully moving the whirring chain around the imageless trunk, allowing it to bite only as needed.

The sound of the metal gnawing at the wood fi lls the air. Sawdust falls like tiny snowfl akes, clinging to everything within range. With each rev of the engine the saw rises and falls, and the air now smells like a campfi re on a cold winter’s day.

The artist stands back, assessing his progress. Now the black bear stares the artist in the eyes.

Jason sculpts wood with chainsaws. About 10 years ago, the 38-year-old house painter began using a chainsaw during his offseasons to create wooden pumpkins. Today the hobby has allowed him to carve a new full-time career.

“I wanted to understand how a chainsaw would work on something besides cutting fi rewood,” Jason says. “When you’re cutting wood you use the chainsaw all the way to the back and dig the dogs in (points on the saw’s chain). But for something like this, you carve with the tip of the saw, the total opposite of how you’re used to using the chainsaw.”

He kept practicing, eventually working his way up to carving animals, but they weren’t always good.

“We still have the fi rst bear I ever carved. My wife, Brittany, calls it Bear Pig. Practice defi nitely makes you, well, lots better,” Jason says, then laughs.

On the days Jason wasn’t painting homes, he’d practice, honing his chainsaw skills. He recalls seriously getting into carving one January and by that May, began to sell his art. 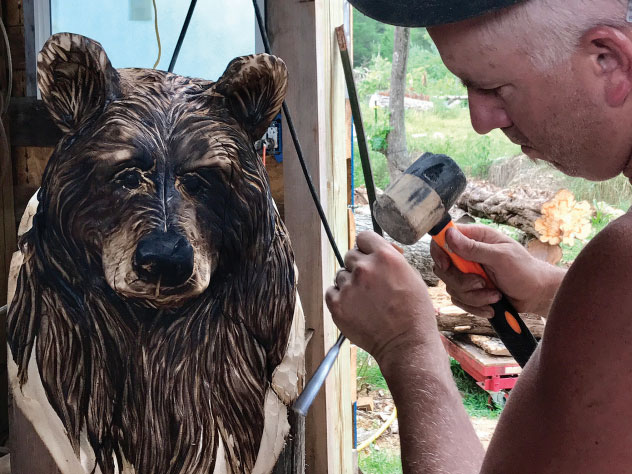 “I went to an Ace Hardware store in Springfi eld and carved for a day and sold a couple of pieces,” recalls Jason. “As I left I thought, ‘Man, I just made as much money in a few hours as I made all last week!’ ” So in 2010, the couple opened Eagle Ridge Chainsaw Carvings and Jason soon went full time into chainsaw sculpting.

The couple began going to shows and fairs to sell the log art. “We didn’t have our two boys then, so being gone 32 weekends out of 52 wasn’t as big of a deal. We’ve cut that back by at least half now,” he says. The carver notes he’s done a few competitions with some world-champion competitors and placed, but that’s not really why he’s doing this.

“Competitions are tough, no matter how good your work is,” says Jason, who has fi nished near the top several times. “You’re usually carving something that takes days in six hours. You have to really be able to keep the pace and get down to the fi ne details quickly.”

Brittany handles the orders and social media side of things, allowing Jason to create new pieces and do commissioned work. The artist says names carved in logs are always popular with people, as are animals, from mice to moose. But he can’t carve enough bears of any kind.

The carver says the fall and Christmas seasons are his busiest, noting orders can get backlogged pretty quickly. “But if they’re ordering a name log, I can knock out dozens of those in a day of nonstop carving,” he adds. A 4-1/2-foot name log runs $100 for any last name that will fi t. They also offer a bigger diameter 7-1/2- foot name log for $350, which can hold a last name and fi rst names of family members on either side of the surname. Prices don’t include delivery.

Jason does plenty of onsite carving, too. People will have a massive tree still on their property, but maybe the branches have been broken or damaged in a storm. They will call Jason and ask him to carve the tree into something beautiful again.

“The biggest thing I’ve carved onsite so far was a 25-foot-tall tree, still in the ground. It has eagles fl ying at the top, two turkeys below that, a 12-point buck jumping a fence near the bottom, squirrels and an owl around the backside. It’s pretty cool.”

Jason says if you’re within a 30-mile radius of his Strafford shop, commissions usually start at $100 per foot. Beyond that, the artist charges $750 for the day.

“I hated to do that, but people were asking me to drive four hours to carve a squirrel,” Jason said, shaking his head. “But if you pay me the day rate, you have me for the entire day and I’ll carve however many trees you want me to carve.”

Most onsite jobs are scheduled for the winter months because it’s cooler and it works better for his schedule. “Most people are understanding and don’t mind being on the waitlist as long as they know it’s going to happen.”

Sometimes people will call and want a tree carved, but it’s been eaten by bugs, houses a swarm of bees or has a ton of nails hammered in it and he has to explain why carving the tree isn’t the best idea.

“You want to pay for something that will last, not get blown over in the next storm,” he says.

Pretty early on in Jason’s chainsaw sculpting career, a representative for Stihl approached him while he was carving at a local event. He asked why he was using that brand of chainsaw and Jason told him that it was what he could afford. The rep told Jason to come back in a couple of weeks and when Jason did, he was given a bevy of Stihl saws to use as long as he didn’t use his old saws again. “I’m so glad to have Stan Crader and Stihl USA as my sponsors,” says Jason.

When Stihl has an event, they often have Jason bring his gear to demonstrate.

About fi ve years ago, their 100-plus-year-old white oak started failing and a local arborist told them it was indeed dead. They approached Jason during an annual carving festival and asked him for some ideas.

“We often see eagles soaring high above our cottages,” Kathy says. “So for the last four years, Jason has come down and carved an addition into the tree by adding eagles every year. We have even had brides and grooms choose to stay at our inn because they want our eagle tree in their wedding pictures.”

Every once in a while Jason says he’ll find time to carve something for himself. One of his favorites was a 9-foot-tall sasquatch he began carving, setting it aside as other commissions came in. Months later, he was still staring at the head of a Bigfoot and nothing else.

“Someone asked for an 8-foot bear, so there went my sasquatch,” Jason says, “I’ll get one carved eventually.”