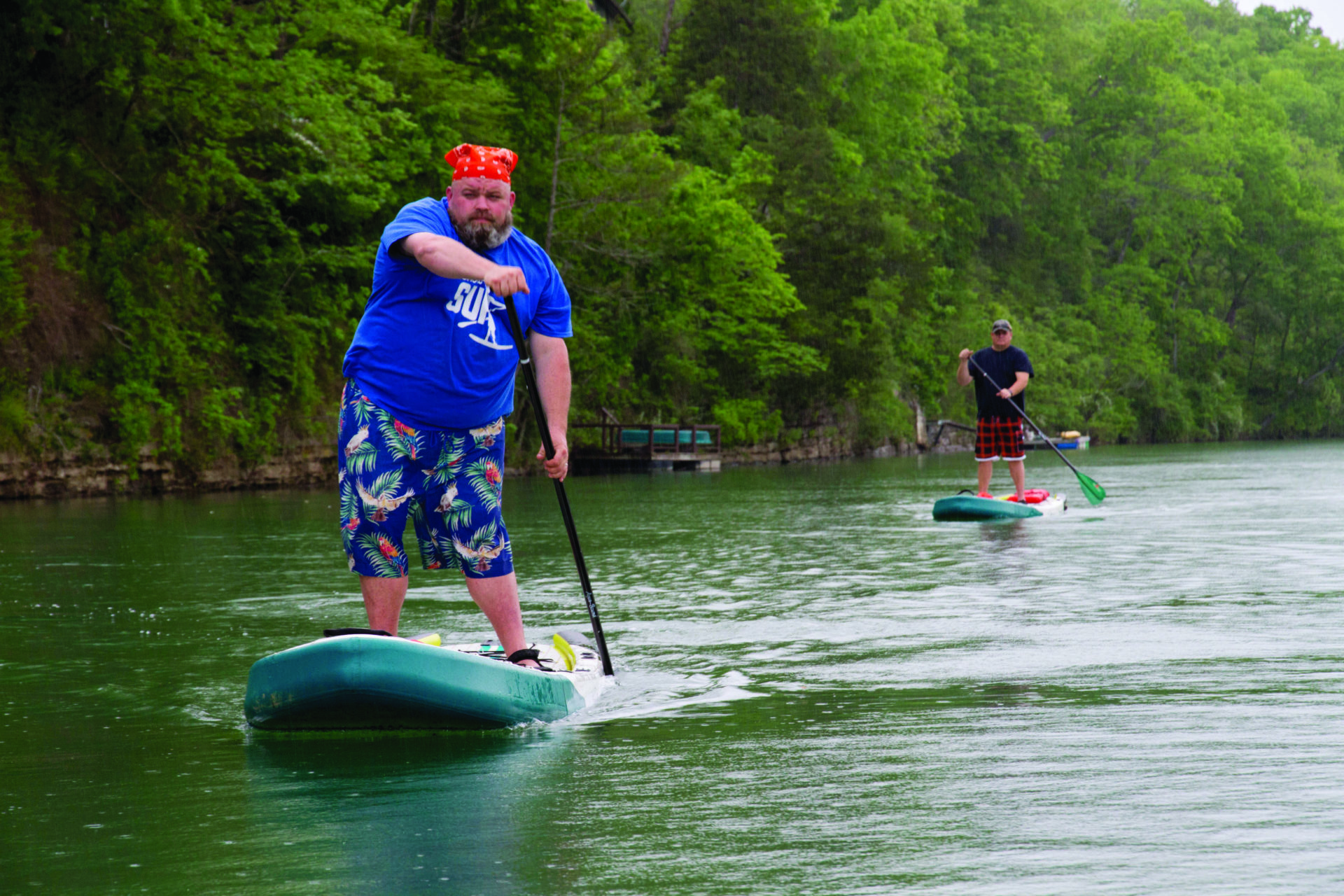 The sun is drifting toward the western horizon, leaving in its wake a vibrant sky of pink and red over Springfield. The frogs have begun their evening song. A warm breeze stirs the river’s current. T.J. Holman lives for moments like these — quiet sunset paddles on a perfect summer night in the Ozarks.

Born on the Mississippi, T.J. says the river runs in his blood. He’d always dreamed of trying stand-up paddleboarding, also known as SUP, but never expected it to change his life the way it has.

After losing his mom to a brain aneurysm in 2015, and consequently his job at her company, T.J. struggled with health issues and gained weight. His friend, Shane, who owns SUP St. Louis, offered to build him a board that would support his 425 pounds.

“I’d never paddleboarded a day in my life, but I caught the bug. I took that board home, got up the next morning and was on it all day, six days a week, to the point where my wife asked if I was ever going to come home,” he says with a laugh.

The more T.J. did it, the better he felt. By the following year, he had lost 125 pounds and joined Shane on a six-man board — the first of its kind — for the MR340, an annual race from Kansas City to St. Louis on the Missouri River. From solo paddlers to 40-foot long boats that carry 12 to 14 paddlers, the race draws hundreds of participants, including Olympians and professional canoe and kayak racers. “We’re talking 340 miles in 88 hours,” T.J. says. “It’s an insane event to be a part of, and that race is what fueled me to want to teach people to do this.”

In 2018, T.J. and his wife, Nicole, started Show Me SUP in Springfield with 10 stand-up paddleboards. His fleet includes hardboards and inflatables. “They’re all extremely tough, made of the same PVC material that whitewater rafts are made of,” he says. An average board measures roughly 11 feet long by 33 inches wide and holds up to 420 pounds. His personal board is even larger and can haul gear and fishing racks, which is perfect for a several mile float down the Finley River, James River or Lake Springfield.

But the Holmans didn’t stop with paddleboards. After receiving hundreds of calls from people asking if they rented canoes, T.J. sought out old, dilapidated canoes and brought them back to life. With their odd paint jobs and unique shapes such as a nearly square canoe, you’re in for a hilarious, unforgettable float every time. “It’s the same principle, you get in a canoe and paddle, but why not do it in something different and obnoxious,” T.J. says.

From April through October, people can rent T.J.’s unique canoes and boards for an unforgettable float. It’s his goal to get people out of the groove of a normal float trip and encourage them to try something different. “Standing up offers you an entirely different view of the water. There are so many colors and so many fish you wouldn’t see otherwise,” T.J. says. “And all those sections where your friends in canoes and kayaks are dragging over the rocks, you can float right over it on your paddleboard and wave at your buddies as you pass them by.”

There is a learning curve to SUP, T.J. admits. “Prepare to fall in some at first. That’s just the nature of the beast,” he says. But after the first 30 minutes or so learning to balance and stretching your muscles, T.J. says the fun really begins.

“With a board, you can easily drop to your knees if you come up on some little rapids,” he adds. “You’re way more stable on your knees than you are in a canoe or kayak.”

T.J. has seen a wide age group participate in the activity, from babies on boards with their parents to people in their 90s. A few years ago, he let some family friends use his personal board with their son, who is in a wheelchair. They put the boy in a camping chair, alongside his family, and gave him an extra-long paddle. “The boy was out on the water for hours and grinning from ear to ear,” says T.J.

That’s what his mission with Show Me SUP is all about. “My handicap was being overweight. For that boy, it was a wheelchair. I don’t care what your physical ability is, I can get you on a paddleboard,” says T.J. “It may be a 15-foot long, 5-foot wide paddleboard, but we’ll make it work for you. While most other companies focus primarily on average-sized people, we’re able to accommodate larger-sized people, too.”

He loves for people to make the experience their own. Some bring their dogs along. Others who once struggled to stand up are now off participating in races, he says. “Or if you just want to come out and sit, you can do that,” T.J. says. “I like to teach people to stand up, but if you’re coming down for a sunset paddle and you’re just wanting to get away from the kids, or your house, or you’ve had a stressful day and you just need to relax, it’s a floating chaise lounge, if you want it to be.”

Throughout the year, beyond his regular rentals and lessons, he offers themed float trips. They have yoga floats, which are led by a former trick rider for Dolly Parton’s Stampede. They also regularly do sunset paddles, battle paddles and one called Tie Dyes and Tutus. Being a mobile outfitter gives him a great deal of flexibility and allows him to visit various rivers around the Springfield area.

“It wasn’t until around 2010 that people started seeing paddleboards around here. The idea of paddleboarding really migrated from places like Hawaii and California,” he says. “In other areas like Texas or Florida, people paddleboard on all the waterways. They use them to go to town and get groceries. All those waterways are like roads to them.”

For T.J., stand-up paddleboarding truly changed his life. He named his own personal board “Makuahhine,” which means “mother” in Hawaiian, to honor his mom and the journey of the last few years. “Plus, my board is the mother of all paddleboards,” he says with a laugh.

T.J. is convinced that getting away and unplugging for a few days on the water is medicine for the soul. Despite his losses and challenges in the recent years, T.J. isn’t looking back. “I’m just paddleboarding across the state of Missouri and loving it.”

To learn more about Show Me SUP visit www.showmesup.com, find them on Facebook at www.facebook.com/ShowMeSUP or call T.J. at 417-521-4421.

Kaiser is a freelance writer from Hartville.