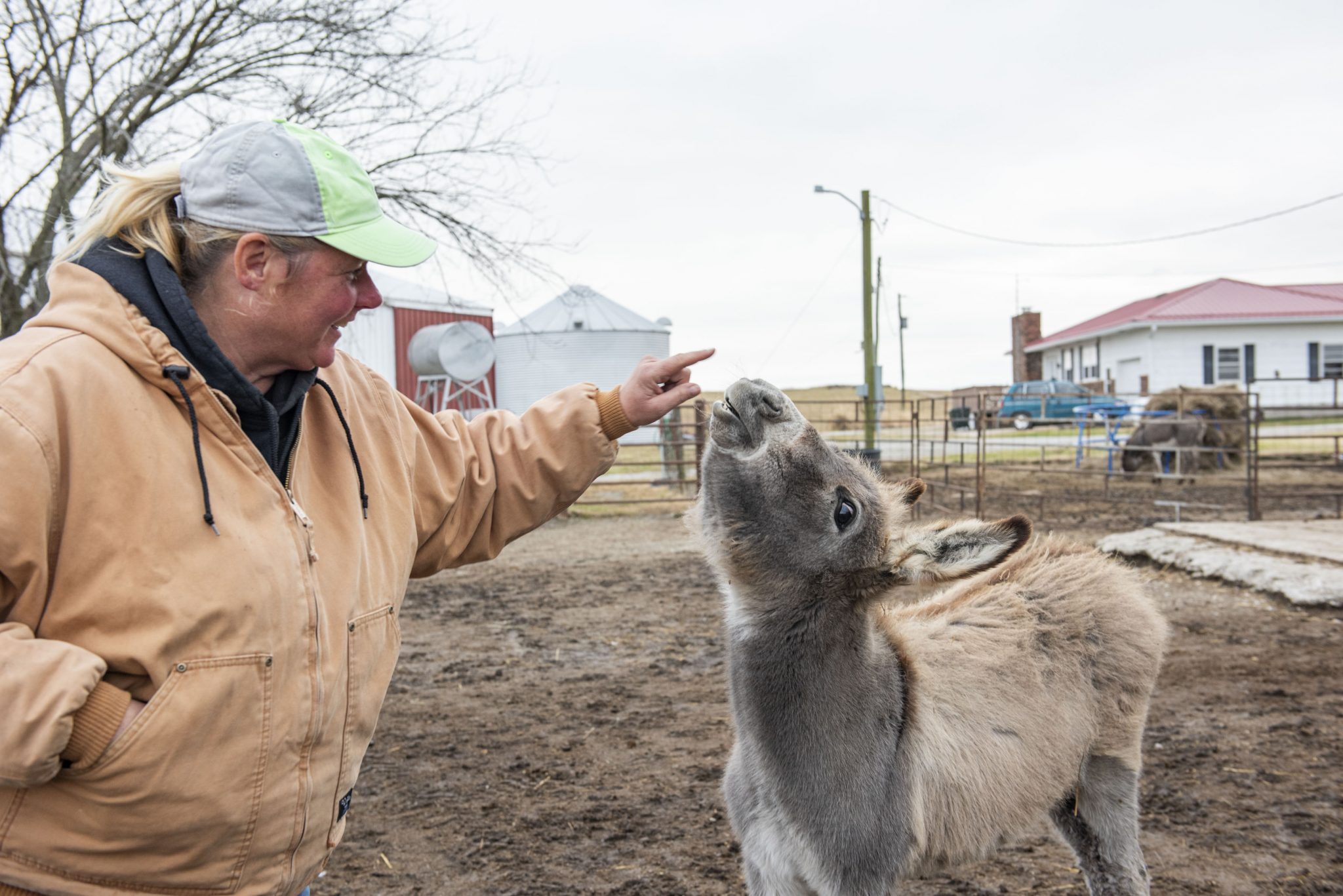 D&D Donkey Rescue is home to those who bray
by Heather Berry  |  hberry@ruralmissouri.coop

The old four-wheeler sputters to a stop near the edge of a creek where several donkeys graze. While the group nibbles, two donkeys stick closer together than most.

“Ember is blind and Basil is her constant companion,” says Deanna Kafka, co-owner of T&D Donkey Rescue in Liberal. “You won’t see one without the other.”

Ember was rescued from an auction slaughter pen in 2015. With a 4-month-old foal now at her side, the docile donkey was fur over bone when Deanna saw her.

Deanna and partner, Tom Kohley, own T&D. While there are several horse rescues in Missouri, this is the only one specifically geared toward donkeys, the couple says. The organization is dedicated to rehabbing at-risk, neglected, abandoned and abused donkeys.

Raised in Wisconsin, Deanna spent most of her teen years helping break horses. But an accident changed the equine lover’s life forever.

Climbing onto the back of a green horse, the animal got frightened and threw Deanna off, fracturing vertebrae in her back. While time healed her body, Deanna found she was emotionally unable to get back on a horse and ride.

Years later, Deanna moved from Wisconsin to an 800-acre farm in Liberal, where she and Tom grow crops — and offer donkeys the love and care they deserve.

In 2013, when they were in Texas on vacation, she received a text message about two jennies (female donkeys) which had been left in a kill pen in Oklahoma. “The horses had been saved, but nobody wanted the two donkeys because they were in such horrible condition,” says the Barton Electric Cooperative member. “So I said we’d take them.”

The donkeys were skin draped over bone. The couple named one Donkey, after the “Shrek” character, and the other, Floppsalot, because of her big, floppy ears. “That was the beginning of T&D Donkey Rescue,” recalls Deanna, noting the organization became a nonprofit in 2016.

After more than $1,200 in veterinary care, the aptly named Donkey had to be euthanized. With a great deal of care, Floppsalot enjoyed several more years during which she was well loved. “When we got her, she had a deteriorated hip joint and torn ligaments in her hind legs because she had been used as a roping donkey,” Deanna says.

Donkey roping is when a donkey is used in place of a young calf for sport roping practice. The donkeys are roped over and over again until they either quit working from the trauma or are too injured to continue being used. At that point they’re often sent to auction for slaughter.

“Floppsalot taught me more about forgiveness than anyone else ever could,” says Deanna. “She learned to trust again and we were part of that process.”

The donkey caretaker also shares that Floppsalot taught her about how smart and gentle donkeys are.

“People may think of donkeys as stupid and stubborn, but I don’t think that’s true,” Deanna says. “They’re like giant dogs. They enjoy interacting with each other as well as people they trust. They love being loved.”

Over the past seven years, T&D Donkey Rescue has rescued nearly 500 donkeys, with 100 currently roaming controlled grazing areas on the southwest Missouri farm. The nonprofit also has adopted 239 of the equine to good homes.

“By the time we see them, they usually look sad and hopeless. Over time you see the life come back in their eyes when they’ve realized we’re here to help them, not hurt them,” says Deanna.

She holds up a 10-inch piece of what looks like dried-out driftwood.

“Do you know what this is?” she asks, not waiting for reply. “It’s a donkey hoof that was never trimmed. Some of these donkeys come to us with such damaged legs that they’re literally walking on bone — or hooves like this.”

Donkeys have long been used as sure-footed trail animals, guards for livestock or pulling carts in shows or parades. Their usefulness goes back centuries — even Joseph had a sure-footed donkey carry Mary and their soon-to-be-born son to a stable in Bethlehem.

Deanna says they’ve had some well-known donkeys come through the farm.

“We had a little donkey named Petals that was famous on six continents,” Deanna says. “She was adorable. We had her dressed in costume within 24 hours of being born. She loved people from the start.”

Several of the donkeys have been adopted by the Sight and Sound Theatre in Branson. “If you see a donkey in the show, you’re probably looking at one of ours,” says Deanna.

As Petals grew up, she would follow Deanna and the volunteers around the farm to see what was going on. The foal was working on becoming a certified therapy animal, but gained fame after Deanna shared a photo of the little donkey picking up mail at the mailbox. The photo went viral on Facebook and mail began pouring in.

“Petals got mail from around the world,” Deanna says, adding she still has every card and letter. Amazingly enough, Petals even found time to reply to the kids who wrote.

Petals died suddenly last spring. Tests were unable to find the cause.

“Everyone misses Petals,” Deanna says. Tom adopted a donkey for Deanna this summer and she says he has a similar personality to Petals.

“McGee wouldn’t mind getting mail,” says Deanna, “He’d write the children back like Petals did.”

Deanna, Tom and a small crew of volunteers are the workforce behind the farm.

“We have a small but incredible team of volunteers who love these animals as much as I do, and that’s hard to find,” says Deanna.

Amanda Brown, a veterinarian based at the Animal Care Center of Fort Scott, Kansas, believes what T&D Donkey Rescue does is out of pure love.

“I’ve learned so much from working with Deanna,” says Dr. Amanda, as folks usually call her. “It’s one thing to learn about what a body condition score means when you’re studying books in vet school, but when you see what a score of 1 out of 9 is in real life, that puts it into perspective.”

A score of 1 out of 9 is an animal with barely any body fat and near death.

Dr. Amanda and Deanna met a few years ago on a call that they refer to now as “The Liberal 12,” where a dozen emaciated horses and a donkey were rescued on a cold winter night.

“I think it was about 20 degrees,” recalls the veterinarian. “We fought hard and were able to save all but one.

“Honestly, going to T&D Donkey Rescue is like going to the happiest place on earth. Those donkeys always put a smile on my face,” she adds. Last year the budget ran well over $115,000 for feed, care and rescue. “We do what we can, but it’s really the generosity of those who care that make this work,” says Deanna.

A donkey is within arms reach of Deanna. She points toward its nose and his lip twitches as he reaches toward her hand. The donkey smiles.

“When you love something this much, it’s not work,” says Deanna, smiling at the donkey. “They’re smart because they know they’re loved.”

T&D Donkey Rescue is located at 500 NW 110th Lane in Liberal. For more information call 417-214-9010 or email info@tddonkeyrescueinc.org. Follow them on Facebook for updates, adoption information and support opportunities.