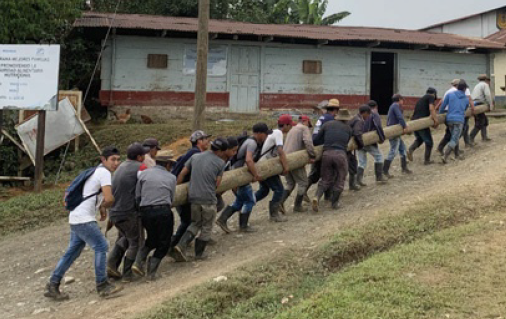 Linemen from electric cooperatives in Missouri gave the ultimate gift to residents of a remote Guatemalan village in December. They left behind family and friends for two weeks in order to build power lines that will bring electricity to the village of Trapichitos for the ﬁrst time.

The linemen had to string power lines across many deep ravines in order to connect the village to a small hydroelectric dam.

“It was deﬁnitely a challenge for the simple fact that we don’t see the kind of mountainous areas like this back home,” says Tim Pirtle, a safety instructor for the Association of Missouri Electric Cooperatives and the project leader. “When the linemen ﬁrst stepped in and saw what the project was all about there were obvious looks on their faces that they didn’t know how they were going to get across these deep valleys. But they did an excellent job accomplishing it.” He adds that the project would have taken much longer had it not been for the efforts of those it was intended to help. Men from the village worked side by side with the linemen.

When it came time to stretch the wire, they swiftly pulled it down hills so steep the linemen feared for their safety. But just as quickly the Guatemalans appeared on the other side, almost running up the steep slopes, their natural element.

The villagers also dug dozens of holes for anchors, carried heavy poles to their locations and set the poles using only brute strength. Besides building primary and secondary lines, the linemen also wired the village’s community center, school and a communal kitchen.

The work here is not ﬁnished, however. This month a second group of linemen will return to the village to wire 120 homes.

We will have more coverage of the effort in our March issue. You can follow the project on Facebook by searching for Missouri on a Mission.