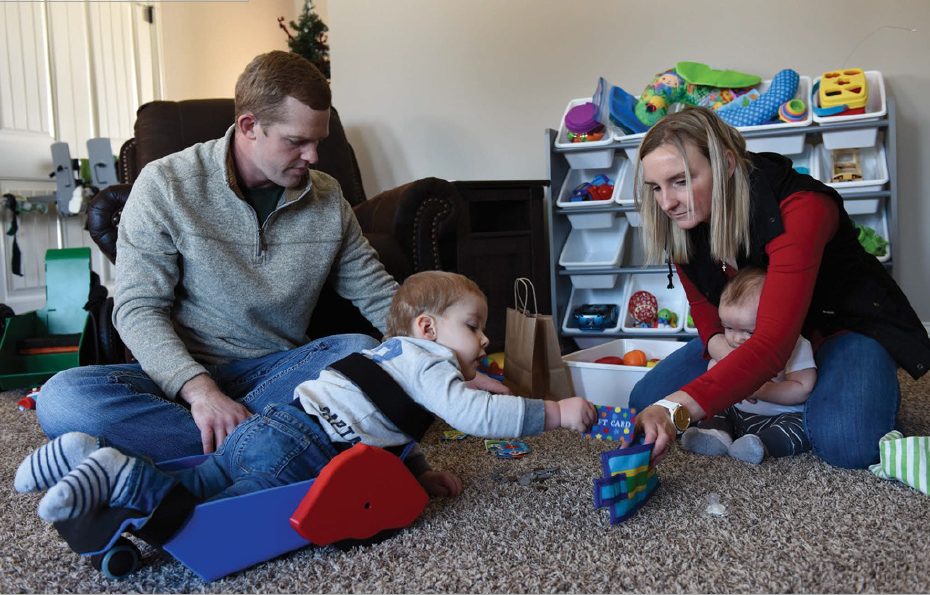 The Frog is making kids mobile
by Heather Berry | hberry@ruralmissouri.coop

The front door opens as a flash of green zips through the foyer and then spins around to see who’s arrived. A smile breaks across the face of 2-year-old Brody Moreland, then zip, he’s off chasing the cat through the kitchen.

He wheels over to stop and kiss his new baby brother, Brett, on the forehead, then zooms off to the family room.
Brody was born with spina bifida and spinal cord atrophy. He is paralyzed from the chest down. This limits his opportunity to crawl or walk like most children.

“We had an ultrasound done around week 20 of the pregnancy and found out Brody had spina bifida,” says Ally, Brody’s mother. “Doctors said Brody’s case was severe. He can’t get signals through his spinal cord which is one of the factors that limits his mobility.”

Spina bifida occurs when the spine and spinal cord don’t form correctly and the condition keeps the muscles from being able to move on their own. The condition is quite rare. Of the nearly 4 million born in the United States each year, 1,600 babies are affected, according to the Centers for Disease Control and Prevention.

“We don’t think of Brody as different from other kids his age because to us Brody is normal,” says his dad, Taylor. “As he began to grow and develop, his mobility became more of a focus for us. Through a lot of trial and error and late nights, we created a mobility device called the Frog.”

Brody’s ﬁrst year was ﬁlled with hospital visits and lat-er, physical therapy to help him gain movement in his legs. Therapists showed the Morelands how electrical stimulation would help improve Brody’s muscle function. When he doesn’t have physical therapy in Columbia, they do hands-on therapy at their Centralia home, including an hour of electrical stimulation each day and at least two hours in a stander, which helps strengthen muscles and bones.

“Around his ﬁrst birthday I started wondering how we could help Brody become more mobile. He could play with toys near him but couldn’t move around on his own,” Taylor recalls. Someone gave Brody a scooter board but his hands would get stuck beneath the board and carpet was difﬁcult to navigate. “I wanted to make something more helpful,” Taylor adds, noting his ﬁrst evolution — a board attached to front caster wheels with a rolling pin on the back — didn’t work well.

Around August 2018, after nine other evolutions of the wheeled board, the dad’s next creation became the prototype of the Frog they now use with Brody.

“I used leftover ﬂooring and wheels from one of Brody’s toys. Custom wheel covers prevent his ﬁngers from getting run over all the time. A strap holds him onto the cart.”

Brody’s pediatric physical therapist Gerti Motavalli says she loves the fact the Frog focuses on mobility. “Kids who sit in wheelchairs most of the time usually battle muscles that bend,” says Gerti. “The Frog helps lengthen muscles by extending Brody’s body and keeping him straight. He’s also able to move and discover the world around him which is also important.”

The Frog allows Brody to lay on his stomach, with his hands outstretched and legs strapped behind, giving the appearance of a frog. The 6-inch wheels allow the cart to move smoothly on both carpet and hard ﬂoors. The Frog helps strengthen Brody’s upper body muscles.

“Of course Brody had to learn how to use the Frog,” adds Ally, “So we would put a trail of snacks across the ﬂoor to entice him to roll over to one of us. But it worked.”

Once the Boone Electric Cooperative members realized how the Frog was changing their son’s life, they wanted to share their creation with other parents whose children had spina biﬁda.

“We didn’t want to charge for it because we understand the expenses parents of disabled children face,” Ally adds.

Utilizing a large workshop located at their business, Moreland Seed & Soil near Centralia, Frog Mobility was ofﬁcially born. To raise funds to build more Frogs, the couple shared their goal of raising $50,000 on GoFundMe. As funds slowly rolled in, Taylor began manufacturing Frogs.

“It used to take about six hours to build one, but a computerized router cut that time in half,” says Taylor.

Once the shapes are cut from PVC plastic, relatives and friends often help the couple assemble devices. Soon ABC’s “World News Tonight” picked up Brody’s story. Within an hour of the national broadcast their goal of $50,000 was reached.

“We’ve made 175 Frogs and sent them around the United States and to eight countries, including Australia, Romania, Israel and Singapore,” says Taylor. “They cost about $300 to build, but if a family can’t afford it, we don’t charge them. If they can pay all or part of the cost, they’re paying it forward for someone else who can’t.”

The couple recently completed a design they call GoBro, a patent-pending chair for youth which has a built-in potty, a vital feature for someone paralyzed at the waist.

“The freedom devices like the Frog and GoBro bring to our lives as parents is amazing.” Ally says. “But it’s even more amazing for Brody and others like him because it expands their world.”

For more information, go to www.frogmobilityllc.com, or email Taylor or Ally at frogmobilityllc@gmail.com. You may donate to help the Morelands build mobility vehicles by searching for Help Brody Get Kids Moving! on GoFundMe.