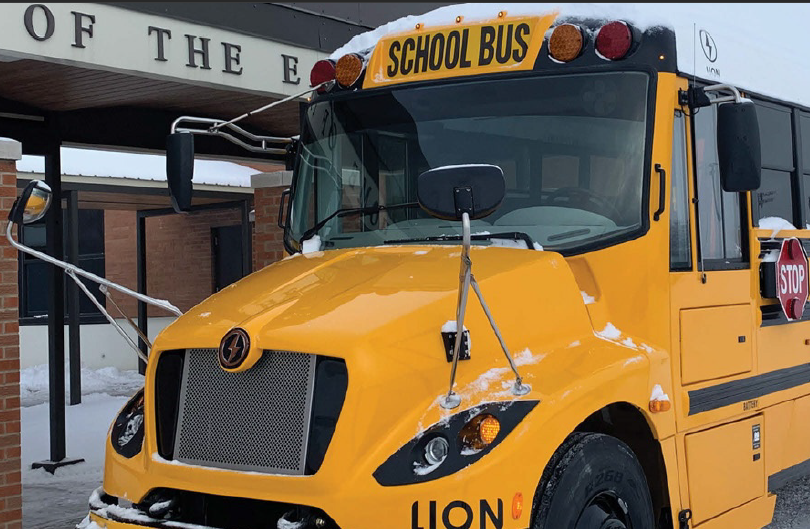 When it comes to enthusiasm for supporting the education and safety of rural youth, electric cooperatives are second to none. If Lewis County Rural Electric Cooperative and Knox County R-1 school district have anything to say about it, they plan on their community being No. 1 in Missouri when it comes to zero-emission transportation, student safety and innovative technology using affordable, reliable energy.

“We’re looking at the EV scenario as a whole,” says Tra­vis Mathes, manager of member services and government relations at Lewis County REC. “We’re always looking at how to bring in load and improve the com­munities in our service territory. EVs are a win-win for the member-owners and us.”

On that note, the co-op and school district took the electric vehicle solution one step further to seek out an electric school bus. The future of education transportation was on display during a Dec. 16 event in Edina. Despite winter weather that canceled classes for school kids across much of the state, the bus – a product of The Lion Electric Co. – was running fine, if a little quietly.

“As a matter of fact, they had to install a speaker  on the outside so that when the bus drops below 20 miles per hour, they will have a noise that sounds like a bus running,” Travis adds. “That way pedestrians and students are alerted there is a vehicle in the area.”

The bus used for the demonstration day is currently in service in Illinois, but Lewis County REC and school district officials are hopeful that one day soon a similar vehicle will become part of the Knox County R-1 fleet. With an average range of 125 to 150 miles on a single charge, the Lion-C model, which was on hand in Edina, could easily handle the school’s longest average daily route of 94 miles.

An electric school bus – potentially the state’s first in service – is par for the course when it comes to the kind of innovation going on at Knox R-1. Every student from kindergarten through 12th grade has their own iPad for coursework and Lewis County REC worked with the district on obtaining a solar panel array, which was installed last year. It’s that kind of forward thinking that made Knox R-1 the perfect place to implement an electric school bus, says Travis.

“We’re trying to do our part by going green and being more efficient as a school district,” says Knox County R-1 Superintendent Andy Turgeon. “All these things give our students more opportunities to educate themselves as far as careers that are kind of growing out there.”

With the help of Northeast Missouri Electric Power Cooperative, Lewis County REC funded a scholarship to send Andy to the National Association of Pupil Transportation conference in November. There the superintendent was able to meet with multiple electric bus manufacturers and set up Lion’s demonstration at the school. The only hurdle still in the district’s way to actually obtaining the vehicle is cost. Currently, the list price for the Lion-C is around $340,000. Andy says the school, with the assistance of Lewis County REC, is pursuing federal and state grant money to help offset the cost and make the electric bus a reality.

The co-op estimates the load of one electric school bus is equal to the average electric use of three homes. That addition on Lewis County’s lines becomes an important factor for adding the buses in northeast Missouri, where economic development typically doesn’t come in the form of multiple new businesses or residential builds.

“We serve three school districts in our service territory,” Travis adds. “If we add 15 buses – five at each school – that’s like adding three to four major subdivisions in our area. That’s constant load.”

For Knox County R-1, Andy says there are multiple benefits to using an electric bus beyond those school officials initially considered. On top of being a zero emissions form of transportation and yet another learning opportunity for students, the electric bus is anticipated to provide significant cost savings over time to the district. Andy contacted four other school districts across the United States and one in Canada which purchased buses similar to the one used for the December demonstration. His contemporaries have told him they expect three times the life expectancy out of the bus tires alone thanks to an even distribution of weight across the vehicle’s wheels and The Lion Electric Co.’s driver training program.

As drivers adapt to the regenerative capabilities of the electric bus’s battery — such as learning when to brake for an approaching stop — they have in some cases been able to exceed the expected range of the vehicle. With reduced maintenance costs due to fewer mechanical parts and no diesel fuel to buy, the dollars-and-cents argument starts to make sense, even for a rural school district’s budget.

“What I’m hearing from the schools is somewhere be-tween $5,200 to $6,200 a year on fuel and maintenance over the life of the bus,”  Andy says of potential saved costs. “We have them about 15 years, so right there you’re talking a lot of money. That easily knocks tens of thousands of dollars off the price of the bus.”

There have been other unexpected potential benefits of the new technology. In the event of a power outage at the school, the bus can be used as a mobile battery system to power up key operations. Similar models on the road in Florida are designed to provide power for hurricane shelters. But perhaps the most significant impact for educators has been that quiet, electric battery: Less noise on the bus means drivers are better able to interact with the students and address bullying or disputes that arise on board. It all adds up to a list of good reasons why the school and co-op are working hand-in-hand to support their rural student body.

“It’s a partnership,” Andy says, adding the co-op has gone to bat for the school, installing charging stations and researching potential funding opportunities to turn Knox R-1’s electric bus into a pilot project for the state of Missouri. “At this time it would be the first,” Andy adds, “hopefully the first of many.”

For Lewis County’s part, Travis says the co-op wants to help lead the way for EV technology in the public and educational transportation sectors.

“It kind of blows people away that a little rural utility with 7,000 meters is interested in being the leader here, but we have to think outside the box and think differently,” Travis adds. “We can’t just think about the here and now, we’ve got to think 20 to 25 years in the future.”