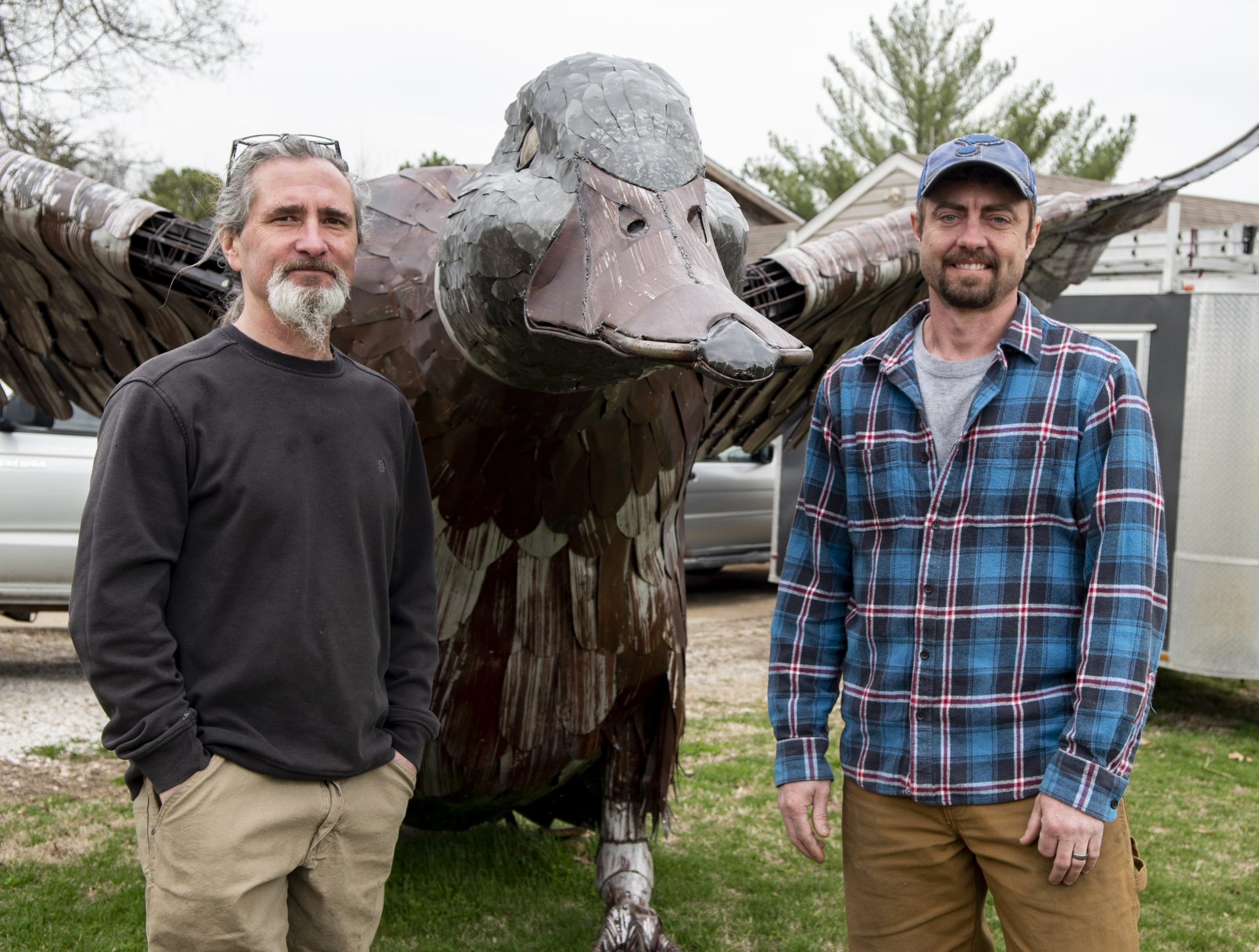 Visitors to Augusta find the giant duck hanging out in one of the yards in town an irresistible selfie stop. If they think the duck’s 23 1/2-foot wingspan is intriguing, they should have been around when Bigfoot made his appearance.

Like the duck, the 12-foot-tall metal sculpture dubbed “Tom’s Samsquach” began life here in the tiny garage studio of Augusta Missouri Metal Arts. He currently stops traffic on Highway 100 east of Washington, where employees of 5th & Oak Auto Body roll him out each morning to greet customers.

Then there’s the cutaway Martin guitar titled “Heritage,” also 12 foot tall and faithful to the iconic design of the original. It took three years to make this piece, which was crafted from repurposed scrap metal found in Augusta’s Missouri River bottoms. This sculpture was discovered in the front yard by a patron of the arts, purchased and donated to the Kirkwood Performing Arts Center.

These and other monumental metal sculptures are the work of metal artists Ben Boyher and Brian Watson. The two friends began their partnership not as artists but as owners of B Flash, a metal roofing company.

After a career that included serving in the Navy on nuclear-powered submarines and doing plasma gas research in Idaho, Brian moved to Augusta. Ben, who is a cousin to Brian’s wife, had spent a lifetime doing construction in east-central Missouri.

“It was slow for me and we started doing roof flashings for a buddy’s company,” Ben says. “Then we got the opportunity to start doing some architectural sheet copper. After that we dropped everything else and we just did that.”

Over the years they developed a solid reputation based on their skills at installing copper roofs and flashing for windows, chimneys and other architectural details. In time they were called on to roof million-dollar homes being built in St. Charles and St. Louis counties.

The jobs got bigger, their skills grew and the demand for their services pushed them to the limits. “We bit off a big chunk,” Brian admits. “We chewed hard to get through that. And we were successful in it. We did huge roofs, we did big turrets, weathervanes, very complicated stuff.”

That’s when the demands of copper roofing lost its luster for Ben and Brian. They considered other opportunities, with Ben’s wisdom always bringing Brian’s dreams back to reality. “We’ve made some decisions along the way not based on money, but on what we want to be doing,” Brian says.

Ben nods, adding, “In the last couple years we started making some smaller copper stuff. Weathervanes. Sculpture. Relief in copper sheets. We had a lot of scrap from these houses.”

Those early efforts at artistic expression were beat into the soft copper using a hammer and a sandbag. “That was our first attempts at shaping the copper,” Brian says, pointing to a stylized face, a frog and a hollow fish. “It’s called repousse and chasing. What you are doing is pounding the back of the panel, flipping it over and then pushing it back to kind of give it that relief.”

Soon the work grew larger. The two were commissioned to build a series of outdoor-themed panels for a cabin. They built a weathervane featuring a 5-foot-tall cowboy riding a bucking bronco, mounted to a 6-foot arrow. Their work included furniture, range hoods, fireplace screens and lamps.

“We started pounding on this copper and it was all pretty experimental,” Brian recalls. “I was doing this on the side mostly. Then Ben stepped in and we began to take it really seriously as a team. And it was so much more fun than a real job.” 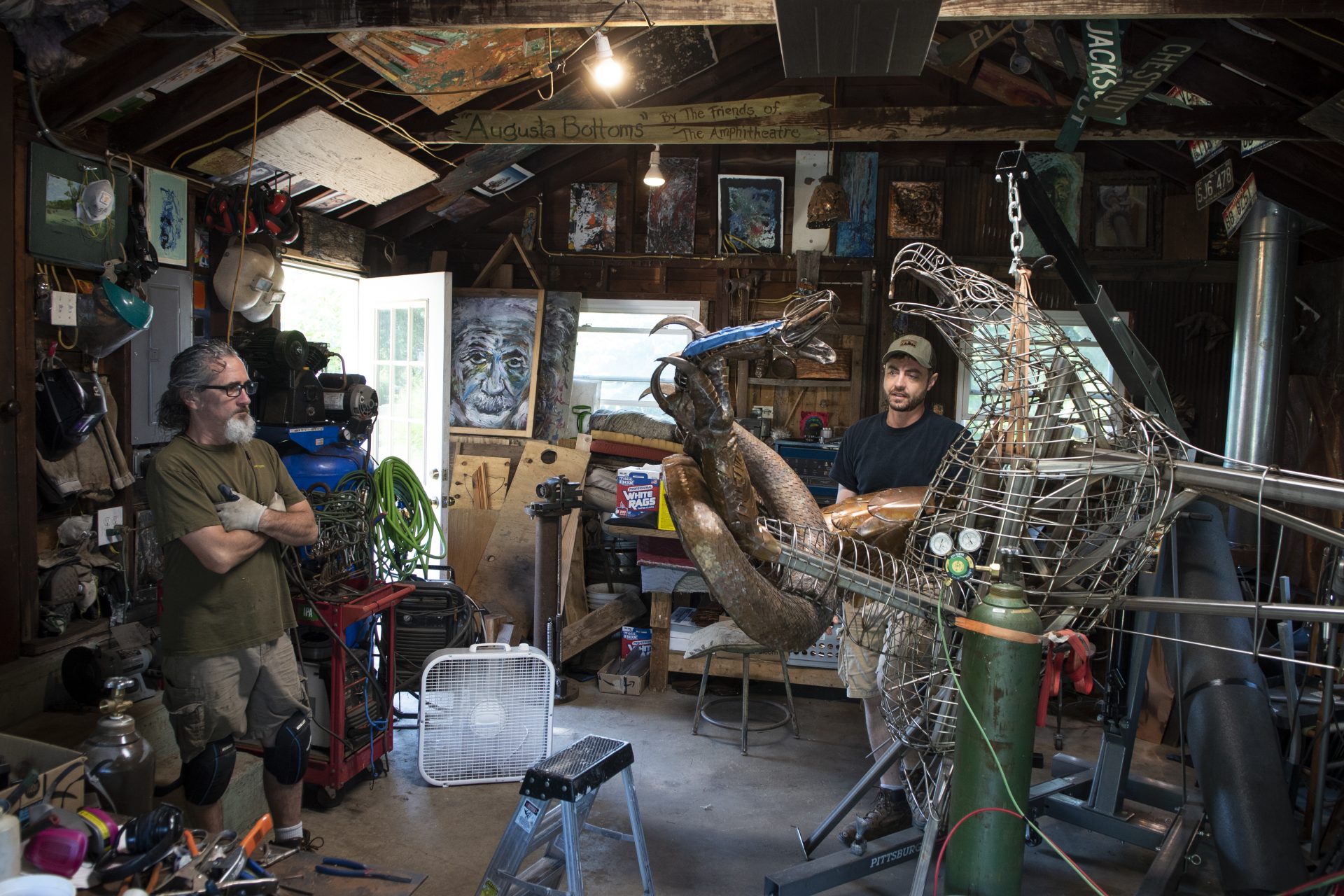 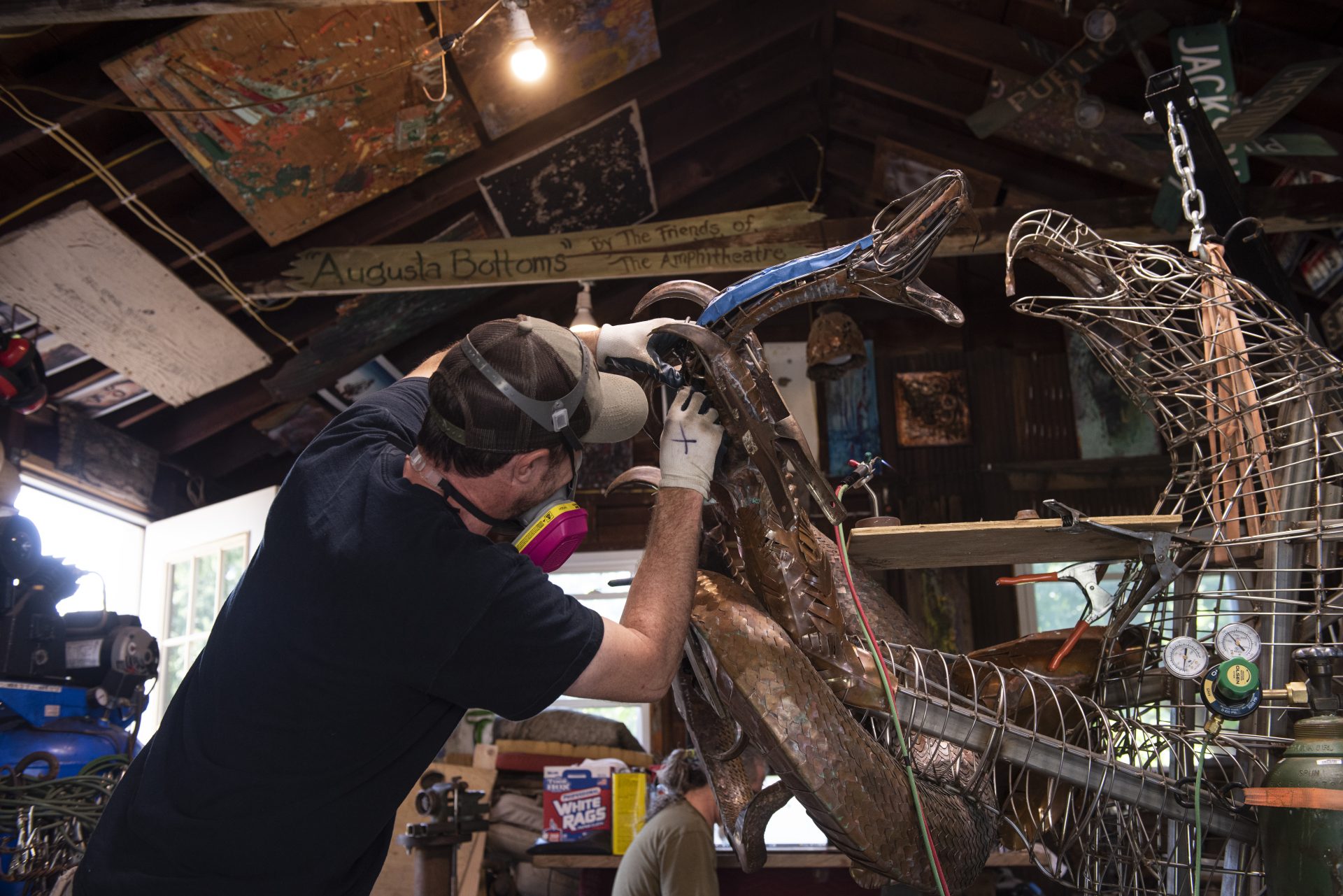 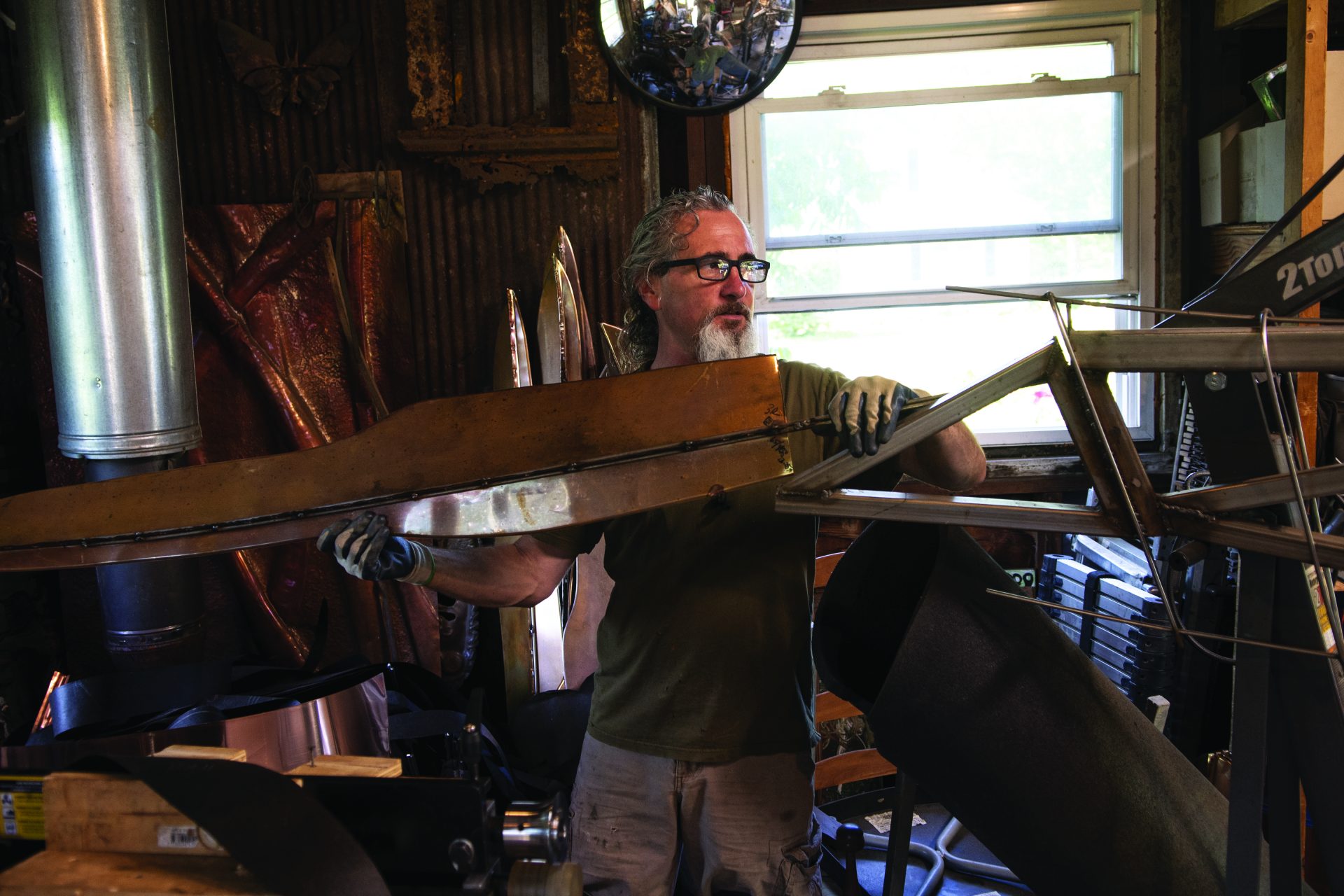 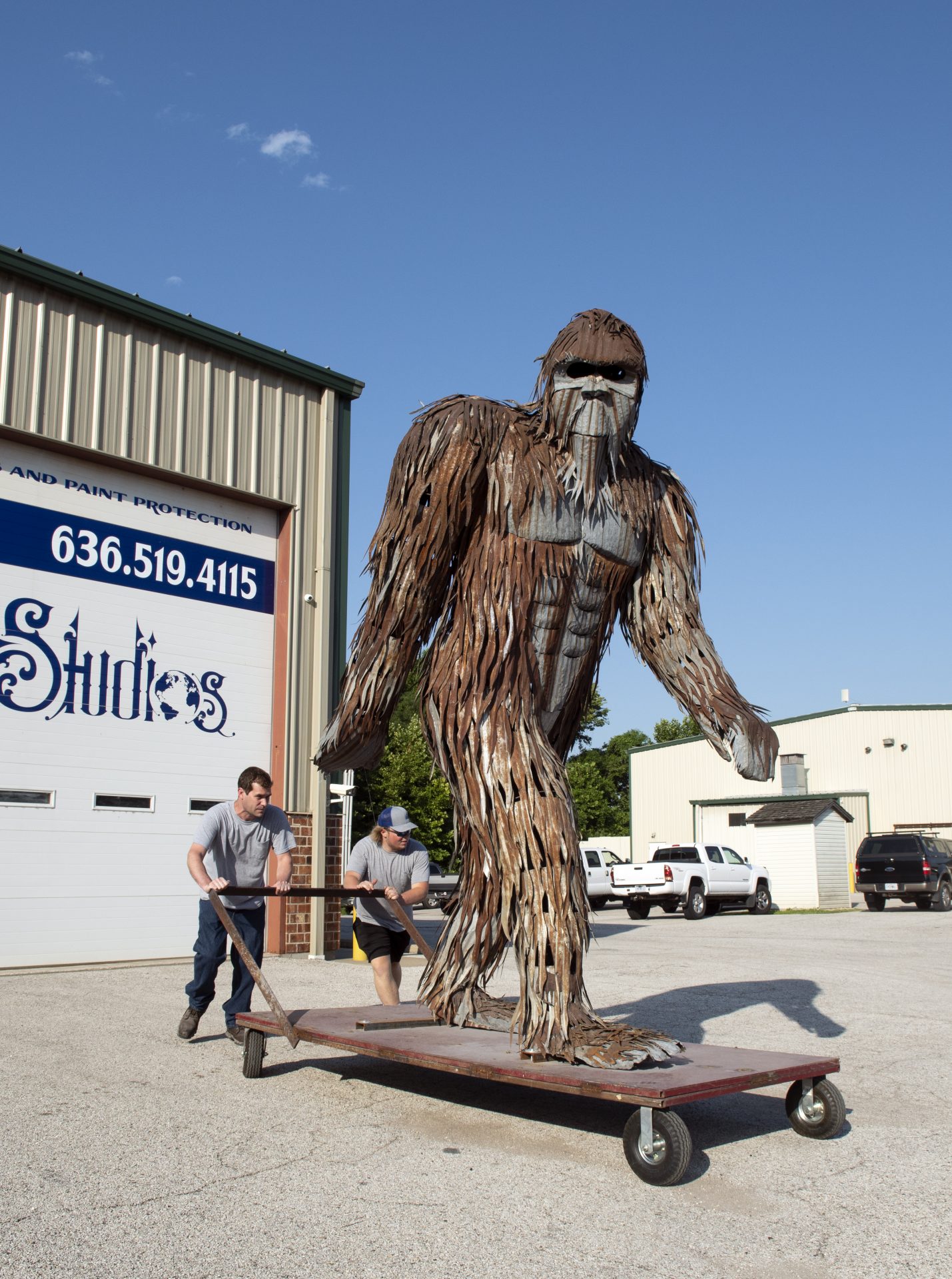 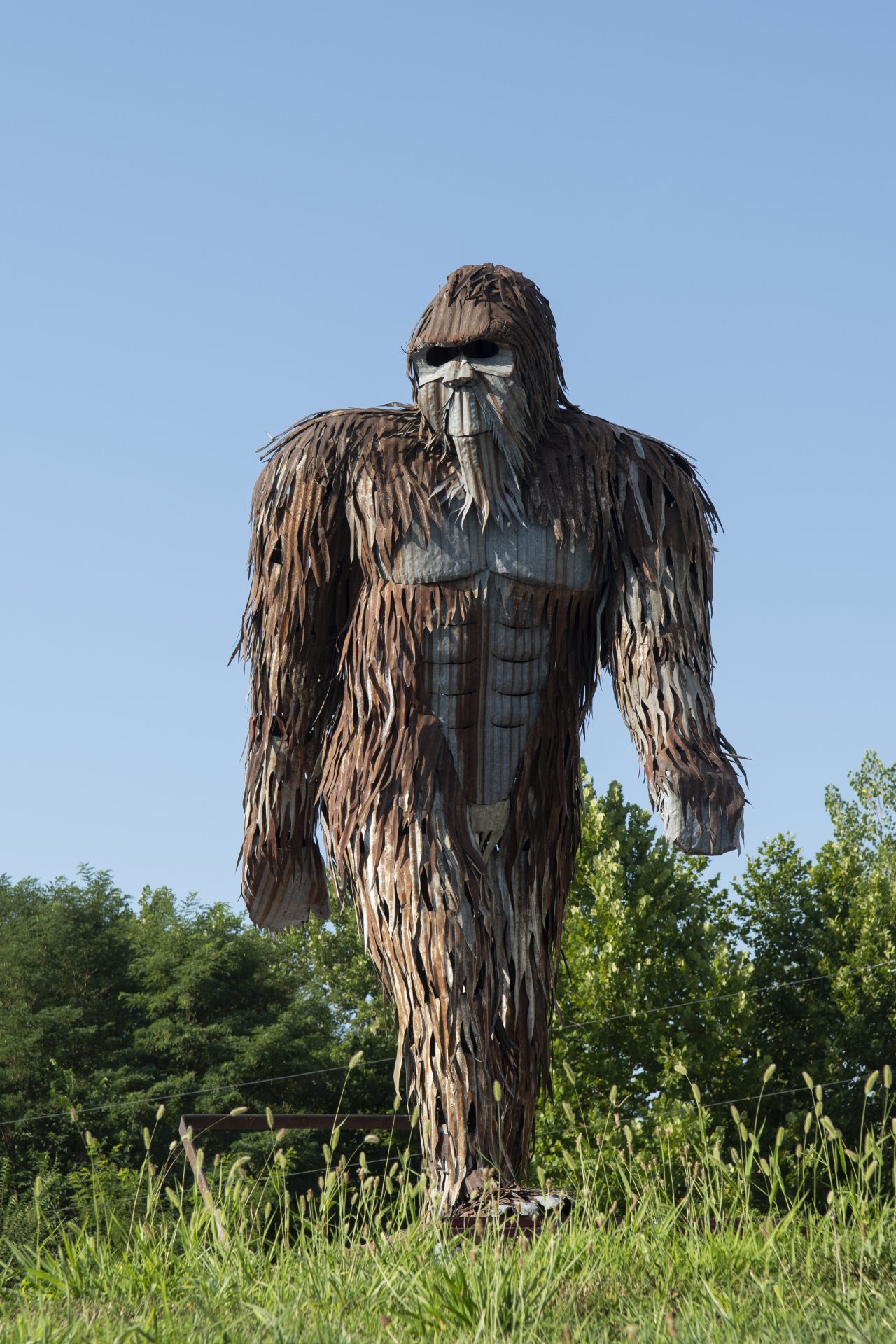 The two discovered they work well as a team, feeding off each other’s ideas. Brian brings engineering and CAD skills to the partnership, while Ben has an uncanny ability to bring Brian’s designs to life.

As their work progressed they learned new skills and began repurposing tools designed for other trades to make their work easier. “We would come up with a new concept and then go down to Harbor Freight and say, ‘we could use that, and that and that,’ and then bring it back here and cut it to pieces,” Ben says.

The “BAM Drake” duck sculpture was one area where their ability to create new tools paid off. The two needed a way to attach the many feathers to the framework in a way that would last. They started using staples shot from an air stapler and twisting the ends. But even with a tool Ben made for a drill they couldn’t get the staples tight enough.

They visited hardware stores and searched the internet before discovering hog rings. The rings were perfect if only the tool would close them tighter. After five or six tries they created a tool that would puncture the metal, wrap the ring around the framework and clamp it tight.

“The story of the duck is we got into the slow season of the winter,” Brian says. “And we had a moment, and Ben and I were like ‘OK, let’s go huge. Let’s speculate on something ridiculously huge.’ So we started making the duck.”

Before a single feather was on it a man called and asked if he could take a look at it. He walked around the framework, asked the price and bought it.

“We were excited about the possibilities,” Brian says. “Right in the middle of the project another guy who lives right here in town stopped by and said, ‘I’d like to have something for myself.’ So he dreamed up the idea of a snake with an eagle.”

Since March the two artists have been working on this piece, their most complicated yet. It features a bald eagle swooping down to capture a large snake in its talons.

To make this sculpture Brian researched both the bird and the snake. He downloaded photos from the internet and used AutoCAD, a computer-aided design program, to match the real form of the bird to the framework of the sculpture. While Brian cuts out the hundreds of parts, Ben painstakingly crimps and solders each one to the frame using a tiny jewelers torch.

It’s tedious and difficult work, requiring many stops to ponder where to go next. But it’s a labor of love that these metal artists hope will be their future.

“If we can’t sustain this, then we have to go back to being people with real jobs,” Brian says with a smile. “We wouldn’t want that.”